PLUS: Luthor’s motives, space krakens – and whether there’s a little somethin’-somethin’ between Black Manta and Cheetah… 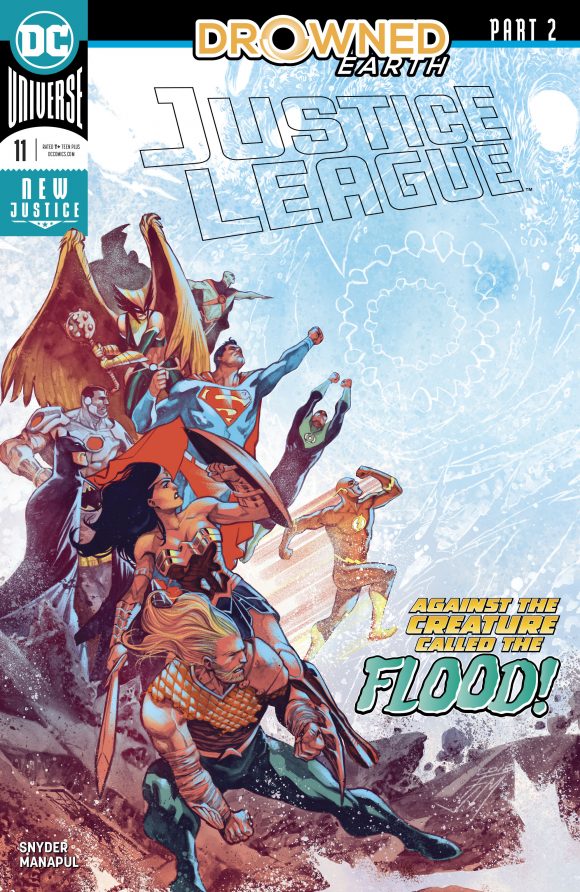 Justice League #11 is out 11/7 and you should most definitely pick it up.

Why? Well, for one thing, writer Scott Snyder and co. are in the middle of Drowned Earth, the big ol’ Aqua-focused crossover.

For another, I haven’t had this much fun reading Justice League in years – and chances are neither have you.

The series is big and bright and a real gas. The creative team – Issue #11’s line artist is Francis Manapul – really seems to be relishing this modern-day version of the Super Friends vs. the Legion of Doom.

I spoke with Snyder about it at New York Comic Con, just before Drowned Earth launched. He discussed the overarching plan for the series and its offshoots; why Black Manta and Cheetah make such an interesting team within the Legion; and, Luthor’s newfound fanaticism.

All that, plus a hint at why the Joker’s been hanging around…

Check it out — with very mild spoilers: 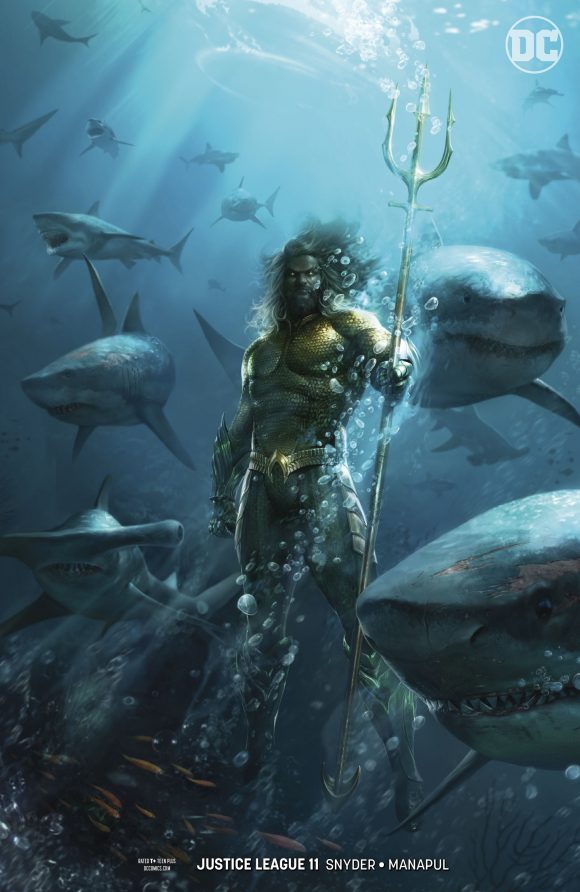 Dan Greenfield: Let’s talk about Justice League. How’s that working out for you so far? Has it been what you’d hoped it would be?

Scott Snyder: I have never had as much fun on a book. I love it, I love the characters, I love the scope of the story we’re telling. We’re trying really hard to build something that’s going to pay off as the years go on. It’s cumulative storytelling. I’ve never done anything like it where it’s one big run over 50 to 60 to 70 issues.

Scott: Yeah, well, that’s where I know the end point of everything we’re building there. I might stay on it past that, but I can tell you it will all culminate in something really big in about a year from now. 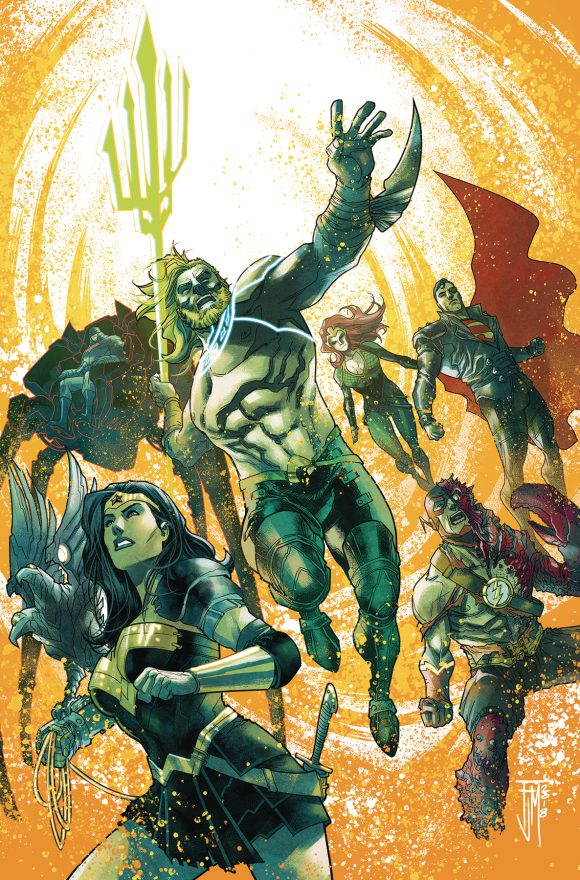 Dan: By bringing in the Legion of Doom, you now have a whole crew of villains, a whole crew of heroes, plus you’re also building something, like you said, off of Metal, off of No Justice, and toward something. Walk us through a little bit of how you’ve plotted it out — some of the technical aspects of how you keep track of everything, while also telling a compelling story.

Scott: Well, I have really great partners. James Tynion and Josh Williamson are on the Justice League books and when we got together to do Metal, they helped me with Metal. We really planned out the next two years, where we had a giant story tree. We have a big whiteboard … we’ll do No Justice, then I’ll do Justice League, you do Justice League Odyssey, you do Justice League Dark, and we’re each gonna go independently but we’re gonna wrap back around until it’s one big story.

So, I keep it in my head because it’s been the plan for a really long time. I mean my favorite comics as a kid were the ones that felt like they had giant design, a big map behind them. For Justice League, I can promise you I would feel like I’m doing a disservice to the best characters in comics if I didn’t have a plan that I felt ran that big and hot and crazy.

So right now, we’re doing Drowned Earth which I’m very, very excited about. It’s my big Aquaman-Wonder Woman story with a real focus on Aquaman. It introduces a whole new mythology to his life. He starts to realize there are things about Atlantis he didn’t know, but not only Atlantis, about his own powers — that there might be other gods like Poseidon that ruled over other oceans in space. It has space krakens, space pirates —

Scott: Yes, there’s a space kraken in the first issue. 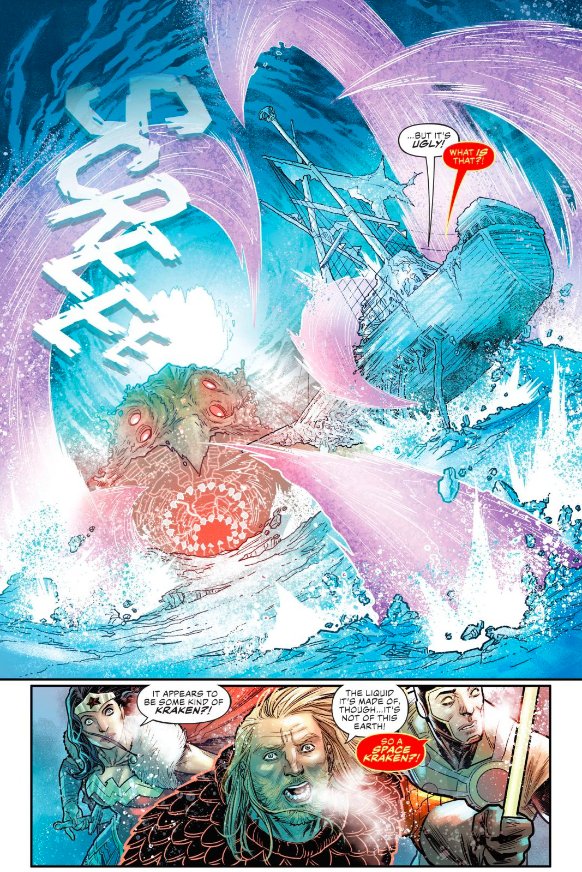 Dan: Does someone say, “Release the kraken!”

It’s really the most fun I have ever had on a book. Everything has consequences, so Drowned Earth really sets up what Kelly Sue (DeConnick) is gonna be doing on Aquaman. She pitched what she was doing, and we felt this story would give her the pieces that she needed and be a giant Aquaman tale right at the time that this movie’s coming out and all that stuff. So, I’m really, really proud of it. 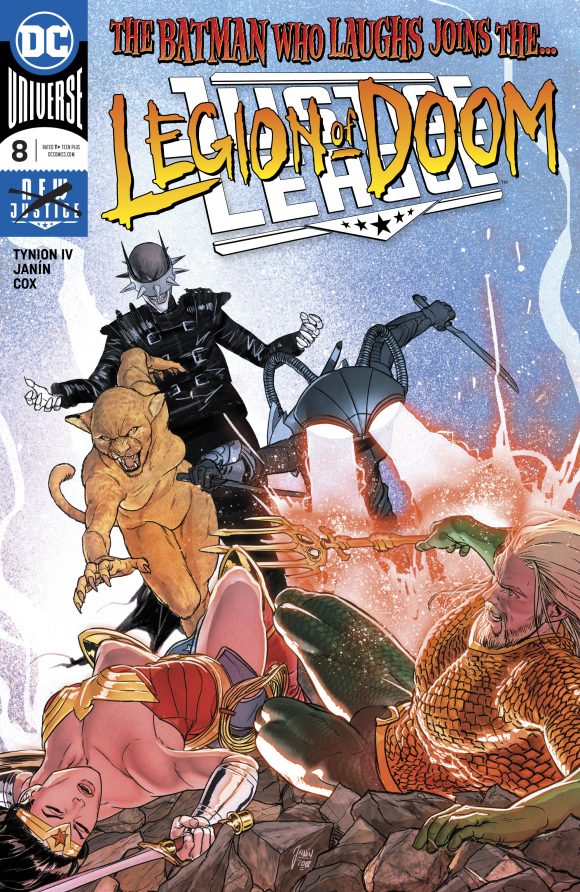 Dan: Now, is something going on between Black Manta and Cheetah?

Scott: Oh, well, I love playing up their relationship. The two of them, to me, are really interesting because the same way Aquaman and Wonder Woman are both sort of magic and divinity, to me they have really similar things with nature. Where Black Manta has always felt like “Why do we revere the oceans? We should whip them into shape and use them,” Cheetah is sort of like, ‘Why do we listen to the gods when they’re worse than us? We should take over.” So they have a really tight bond with nature and divinity which I really love.

Dan: I’m talking about them dating — there’s a little bit of chemistry there.

Scott: You never know! I dunno what happens behind those Hall of Doom doors. I mean, I guess it stays there.

Dan: You’ve got more or less your classic Legion of Doom lineup there, what we used to see on Super Friends, or at least a lot of those characters. You’ve got the Joker in there (instead of the Riddler) because the Joker’s the Joker and he’s the biggest Batman villain obviously. But for me, I’ve never seen the Joker as really a team player. 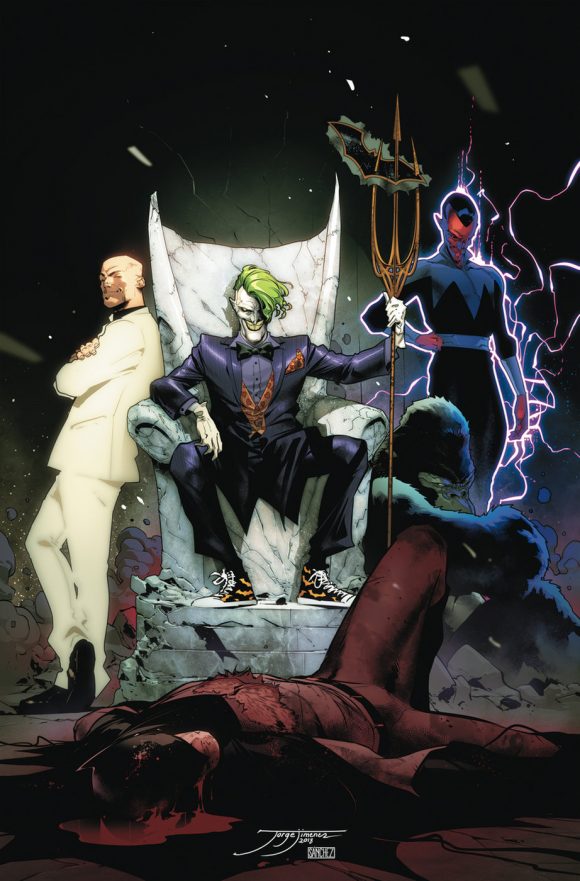 Dan: So why does he belong on this team, and what would make him a team player? Other than him being the Joker, how do you bring him into a story like this and still have it make sense?

Scott: Actually, the next Legion of Doom(-focused) issue, Issue #13, is all about that. It’s actually a full-on Joker issue about why he’s on the team, and his relationship with the Batman Who Laughs, and all of it. It’s literally—the cover is just Joker. So, you’ll see.

I don’t want to reveal it, but there’s a whole purpose to why he’s on the team, what his goals are himself vs. what Luthor’s goals are for him, and why they’ve introduced such a wild card to a team you’d want to be pretty cohesive when you’re dealing with the end of the multiverse stuff. 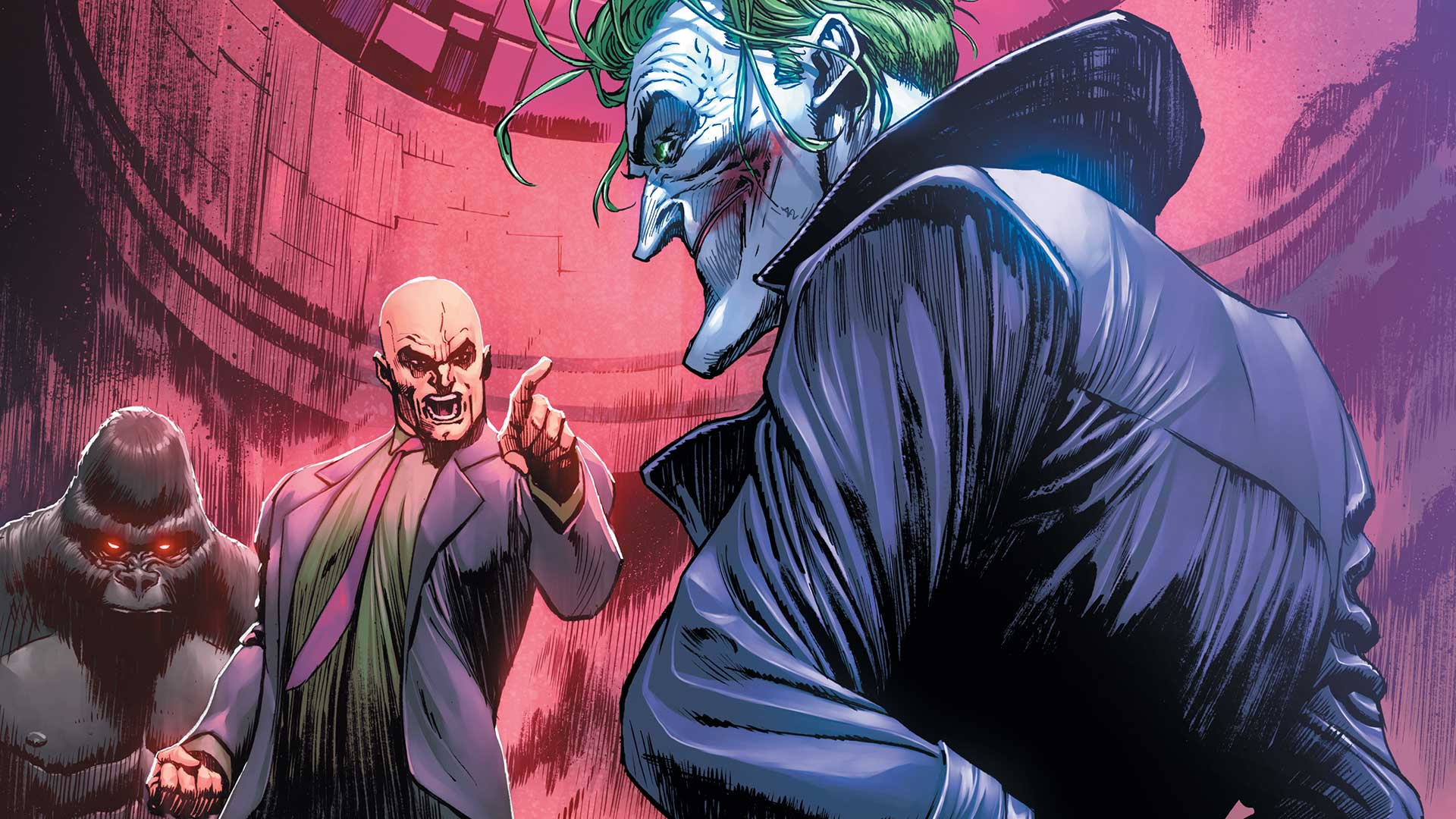 From the upcoming Justice League #13 cover by Guillem March

Dan: Now, we’ve seen different a version of Luthor over the last few years — the more heroic, or the antihero Luthor. The Luthor that you’re playing with here strikes me as one of the most vicious Luthors I’ve ever seen. Talk a little bit about him and his role in all of this.

Scott: Well, for me, Luthor has realized his true purpose is to be the hero of humanity by showing us our true nature and having us embrace that…

After he had a vision of the future and also saw the Earth taken over by — how its main power was entropy in No Justice — (he) realized that we are vicious, selfish, animalistic creatures and we will evolve into our purest form and our best selves if we embrace that nature. So, he’s like, “I will be the shepherd of humanity, I will be its greatest hero and Superman will be its greatest villain, because I will show people how to unlock their true potential: Be your best self, and embrace your inner villain.”

So, to me, Luthor has almost a religious purpose with it, where he feels there is nothing he won’t do to prove his point because he believes in it with almost a zealotous conviction.

Dan: Has he ever read The Fountainhead?

Scott: Oh, that are outside of the ones that I get to use now? 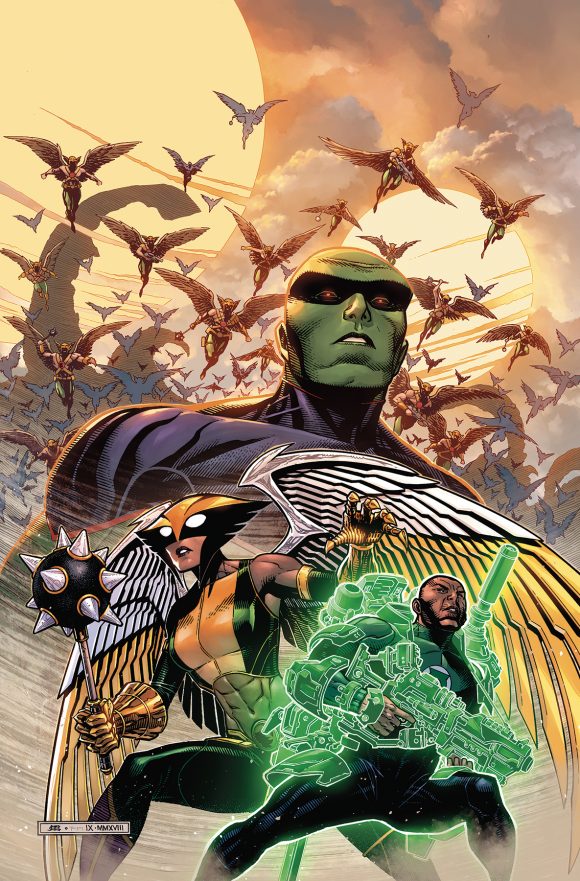 Dan: Well, even in Justice League you get to use them, but you’re not using them full time.

Scott: I wanted everybody to be everything in the first arc. Now, I feel like everybody was there, it showed the scope, the breadth, the Legion of Doom, everything packed. Now, I feel like we’re gonna keep that level of bombast and scope and ambition, but I’m gonna focus on three or four members of the team each arc.

So like, Martian Manhunter, Kendra, and John Stewart are on Thanagar Prime for the Aquaman arc, and we’re gonna focus on them for three issues and what happened to them there, so I’m really getting a chance to explore them. The ones that I’m really excited about (are) Kendra, Martian Manhunter, their relationship, the origins and mythologies they don’t fully understand.

Outside of those, I would say the one I’d really like to use, I’d really like to do more with, is Detective Chimp. He’s one of my absolute favorites of all time. I have a Slam Bradley story I wanna do one day. (I know, it’s like, crazy.) And also Starman. I’m bringing in the Will Payton Starman in a big way (in Justice League)… The whole mythology from Ted Knight, all the way through to Jack Knight, I really want to explore Starman.