I recently re-read the classic The Brave and the Bold #197 and came upon a page that showed Catwoman’s reaction to seeing all the scar tissue on Batman’s back. I paused because that’s become such a thing over the years and was surprised to see a reference to it in the Bronze Age. Turns out, as fan-favorite writer Alan Brennert posted on Facebook this week, that was indeed the first time that had even been mentioned — and slowly, but surely, it’s become not just a Batman trope, but a superhero trope.

Dig Alan’s post, which explains it all — reprinted with his permission. (I added the art.) 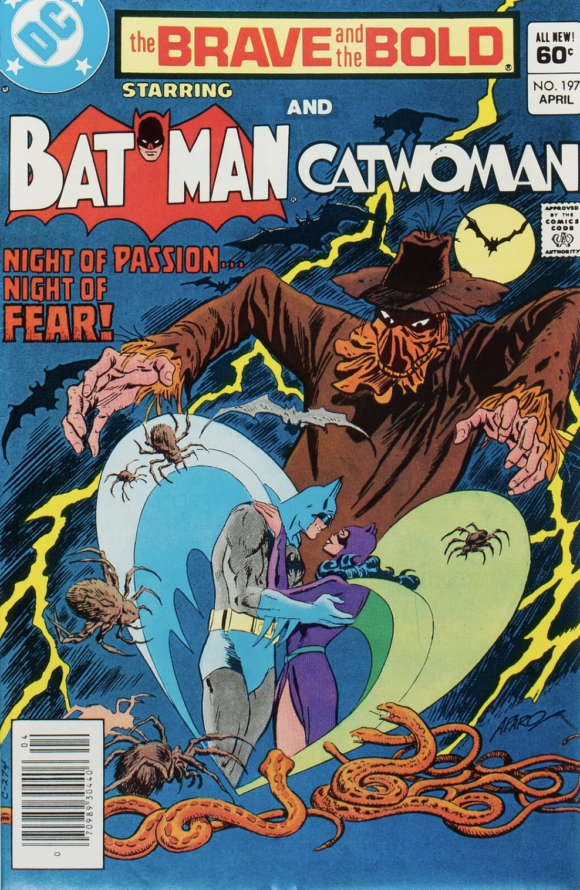 In 1982, I wrote a Batman story, “The Autobiography of Bruce Wayne” — superbly illustrated by Joe Staton and George Freeman — telling the story of the romance between the Golden Age (Earth-Two) Batman and Catwoman. At one point in the plot, Batman’s shirt is set afire and he has to strip it off. When Catwoman looks for burns, she sees instead (though we do not, since this is comics in 1982) a back full of disturbing scar tissue. Batman shrugs it off: “Oh. That. Occupational hazard. Fifteen years of fighting will do that to a person.” This was the first time, I believe, that it was suggested that any DC hero had any kind of permanent injuries (OK, except for the Doom Patrol, but you get my point). 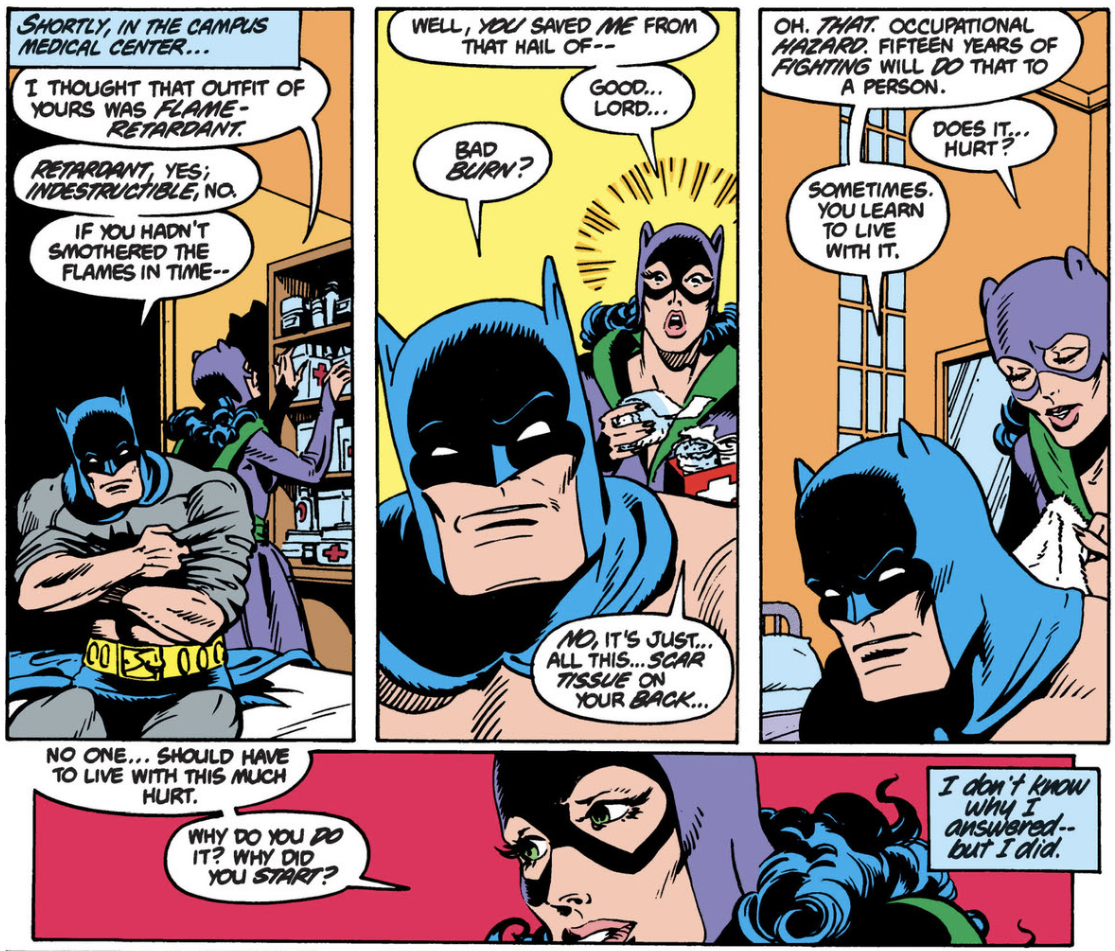 Some years later in 1996, Alex Ross in Batman: Black and White #4 created a vivid, poignant painting of what Joe, George, and I had not shown directly: Bruce Wayne’s back filled with a painful tapestry of scars. It’s become a justly famous image. 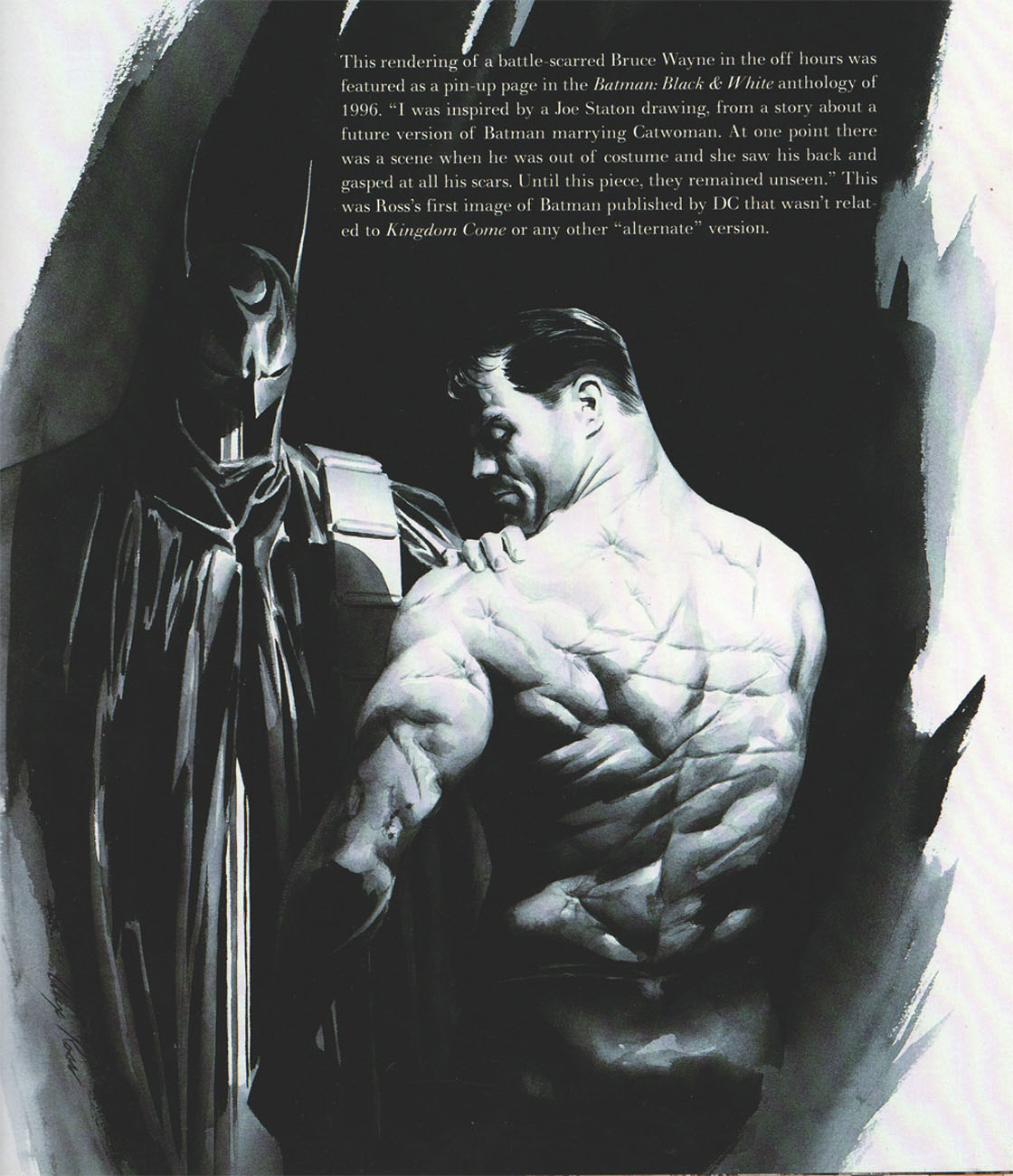 In 2002, in Batman: Hush, Jeph Loeb cleverly echoed the scene from my script, but using the modern-day Bruce and Selina. A nicely done homage. 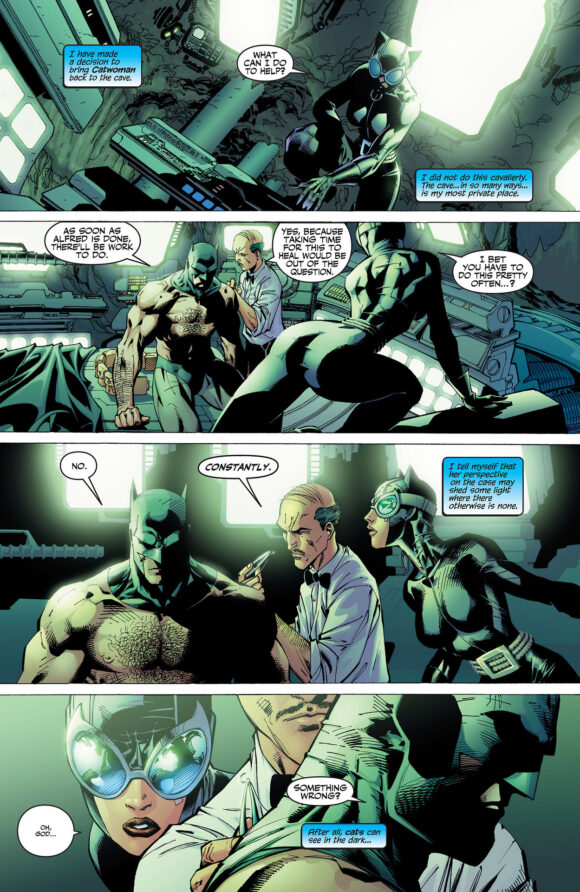 In 2008, the idea/image appeared for the first time on screen, in the movie The Dark Knight, with Christian Bale’s back badly scarred in one shot. When the DVD came out, I received an at-first-perplexing payment from DC with the notation, “DARK KNIGHT DVD.” Huh? I later learned that as part of the extras on the disc, DC had included that page from “Autobiography,” and sent me a reprint fee for it. Page rate, I seem to recall. (I assume they did the same for Joe and George.)

Last week, my wife and I tried to watch Samaritan, a grim, violent superhero movie starring Sylvester Stallone as a superhuman. And as the movie’s kid protagonist watches from his apartment across the street, he sees Stallone, in his own apartment, take off his shirt, revealing… a back full of nasty scars.

At this point I turned to Paulette and announced with a smile, “I have created a superhero trope.”

My little trope started life in words, was expanded upon in a painting, reached the movie screen, and has now jumped the Bridge of Archetypes out of the DC Multiverse and into the vast, infinite MegaOmniMetaverse or whatever the hell you want to call it. God knows where it will appear next, but go, little trope, be fruitful and multiply, and make Papa proud.

Seriously—this may be my most lasting contribution to the superhero genre, and it tickles me greatly. (But it still couldn’t get us to finish Samaritan, which was way too grim and, frankly, dull, for our tastes.)