Marc Buxton is reviewing the first issues of All-New Marvel Now! This week, it was just one book … 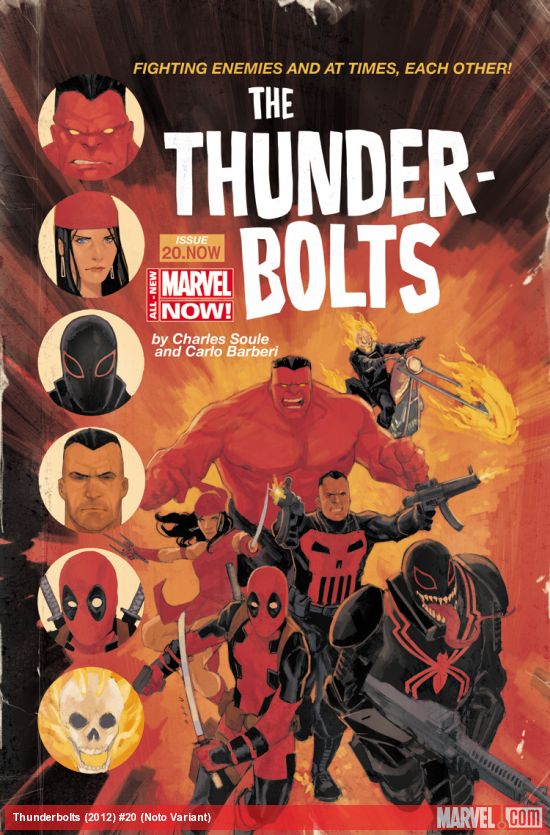 Thunderbolts was an interesting relaunch during the first wave of Marvel Now! last year as, under the initial creative team, the book was barely hanging on by a thread. It was hard to justify a group of anti-heroes with a Hulk and a bunch of human killing machines needing each other’s company. What threat can arise where the Hulk needs a bunch of guys and gals with guns and swords? Along comes Charles Soule, who embraces the madness of the concept and the complete nuttiness of this particular group of characters working together, and creates a delightfully dark team book.

The first issue of the All-New Marvel Now! run kind of starts out with the same problem as before, with the T-Bolts facing down some aggressive LMDs to kick off the action. Again, does a Hulk really need Elektra and the Punisher to help smash a bunch of androids?

Soule quickly ups the stakes by having the ‘bolts needing Johnny Blaze to take them to Hell to take out their former teammate, the death-obsessed Mercy. So now there is believability in the team dynamic: You can buy that the Red Hulk needs extra badasses to survive a journey to Hell. Soule writes an awesome Ghost Rider, with Johnny Blaze returning to a stuntman career after his acting career fails — because he starred in two awful movies. That’s pretty awesomely meta right there.

The premise of this particular team of Thunderbolts is always going to have to work overtime to be believable, but a journey to Hell is a good start.