REVIEW: These Cool GOTHAM Action Figures Are Better Than the Show

Gordon, Selina and Penguin in the house and on the shelf …

I really enjoyed the first season of Gotham. I thought it struck just the right balance between being a live-action Gotham Central and Batman origin story, with a dose of playful camp thrown in for good measure.

Sadly, the second season has done an end run with the camp and dispensed with some of the more interesting, clever and, dare I say, nuanced elements of the show.

The show has improved some the last couple of weeks but it’s not really the Gotham I signed up for. I’m sticking with it because when I roll with it, at least I’m entertained some. But really, this show is getting me thinking more and more about What Might Have Been. 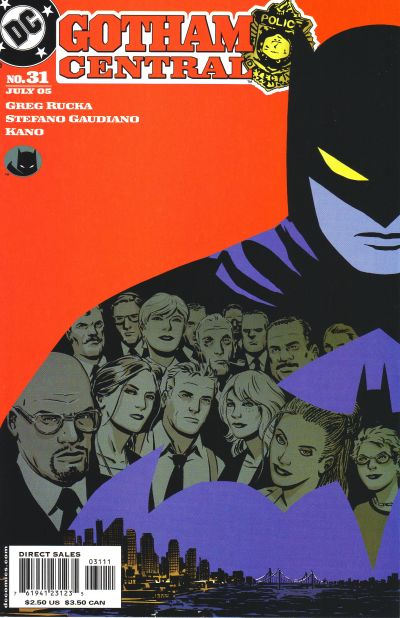 My favorite Gotham Central cover, which makes sense because it was drawn by the awesome Cliff Chiang.

But, hey, at least we have these cool action figures from Diamond Select. I have to say I’m a little surprised that this line even exists, because the show isn’t exactly what manufacturers like to call “toyetic” — i.e., it doesn’t seem to lend itself to a line of colorful, sellable toys.

These characters are inherently less dramatic-looking when compared to whom they become. But I like that Diamond/Art Asylum has taken the gamble and it’s an interesting first wave that’s just hit stores — Gordon, breakout character Penguin and Selina Kyle. 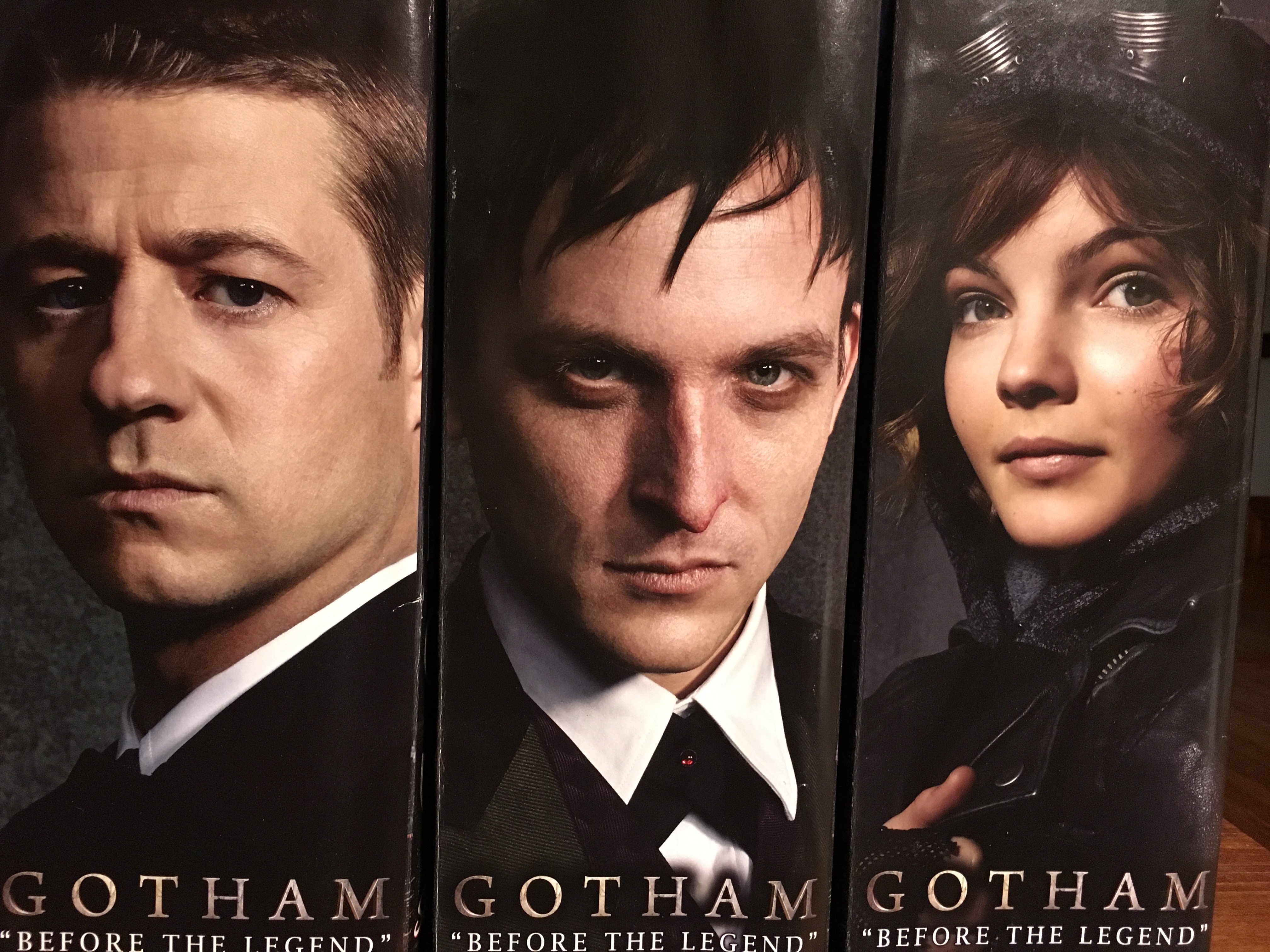 The sides of the Diamond Select packages.

This is the one I most wanted and not just because Ben McKenzie’s Jim Gordon is the show’s protagonist. It’s that I’ve always gotten a kick out of Batman’s civilian or secret ID action figures — whether it be Bruce Wayne and Dick Grayson or Commissioner Gordon and Barbara Gordon. These figures add a depth and texture to any line.

Gordon comes with his service weapon and McKenzie’s put-upon frown. He’s got plenty of articulation that’s well camouflaged by his gray detective’s suit. 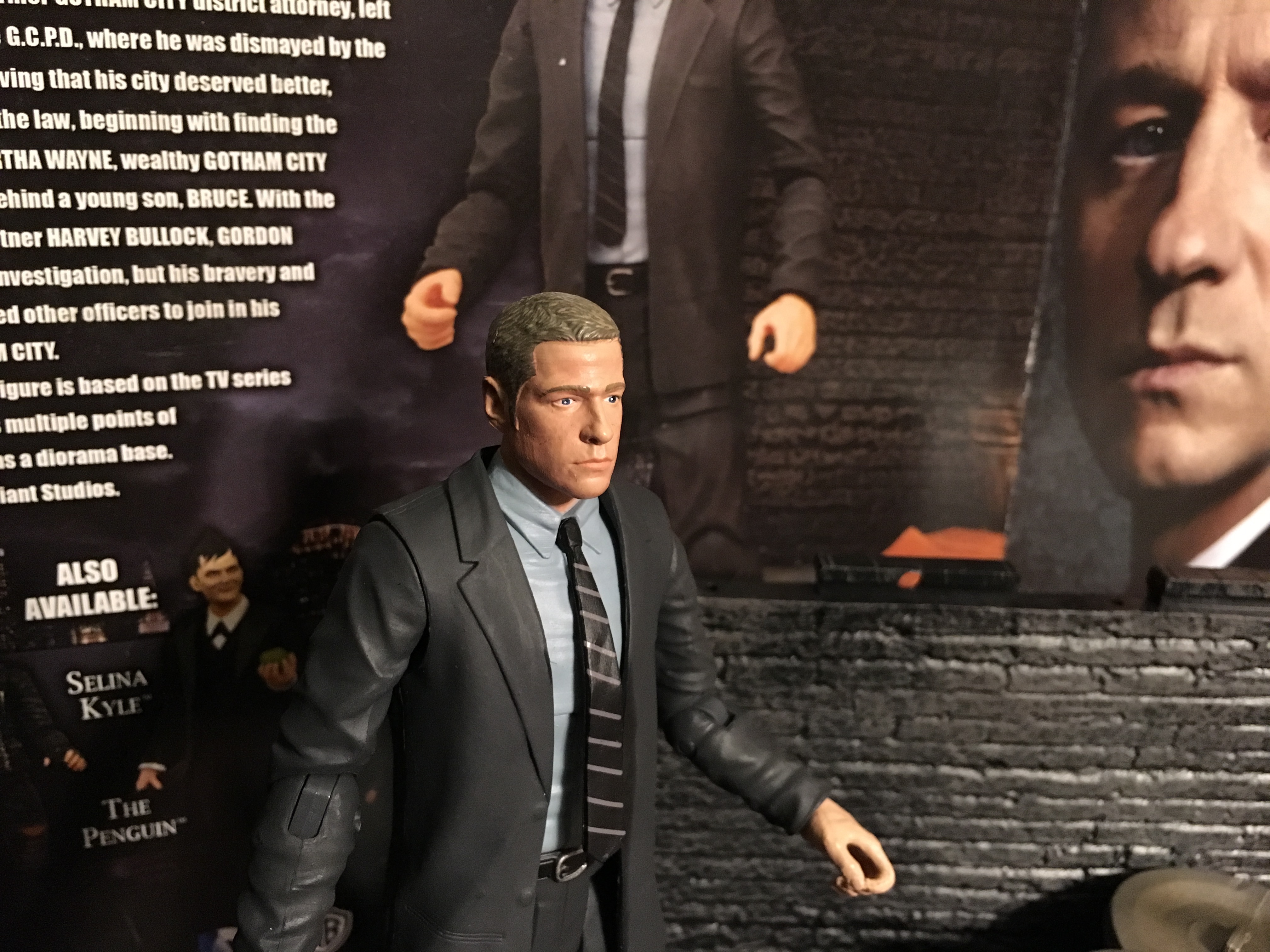 Diamond likes to give their Select action figures dioramas, which are the kind of thing I jonesed for when I was Young Dan. I still do, to some degree, but when it comes to a figure like this, I personally don’t need it.

That said, Gordon comes with a requisitely dingy alleyway background that connects with Selina’s diorama to complete the scene. 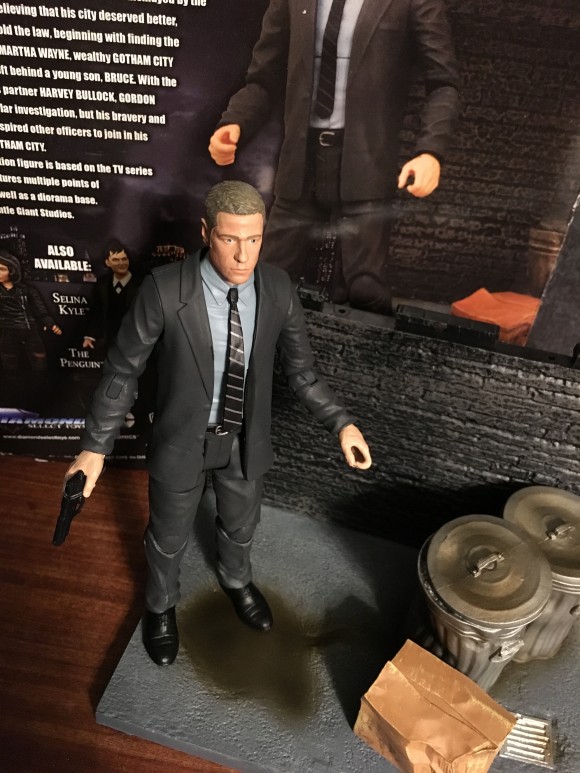 If only the dioramas came with dead Wayne family bodies. (I kid! I kid!) 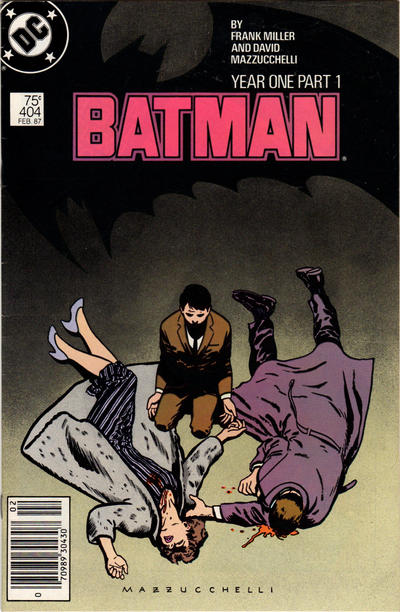 I visited the Gotham set not long ago and asked Camren Bicondova what it was like to be a teenager with her own action figure. She seemed as mystified by the notion as I am. I mean, I didn’t have my own action figure until LAST YEAR.

“It’s INSANE,” she laughed. “I just stood in one position for five minutes straight while the man scanned me and then I saw the product. It’s absolutely insane. I never thought in my whole life I’d get an action figure.” 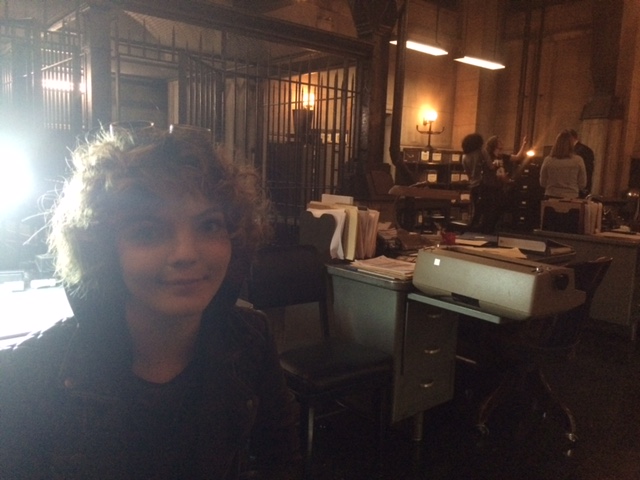 On set. Forgive the glare.  No flash allowed …

Bicondova has such an interesting face that she lends herself well to the action-figure treatment. I mean, she really does look like a cat (as well as a very young Michelle Pfeiffer) and Diamond has captured her well. 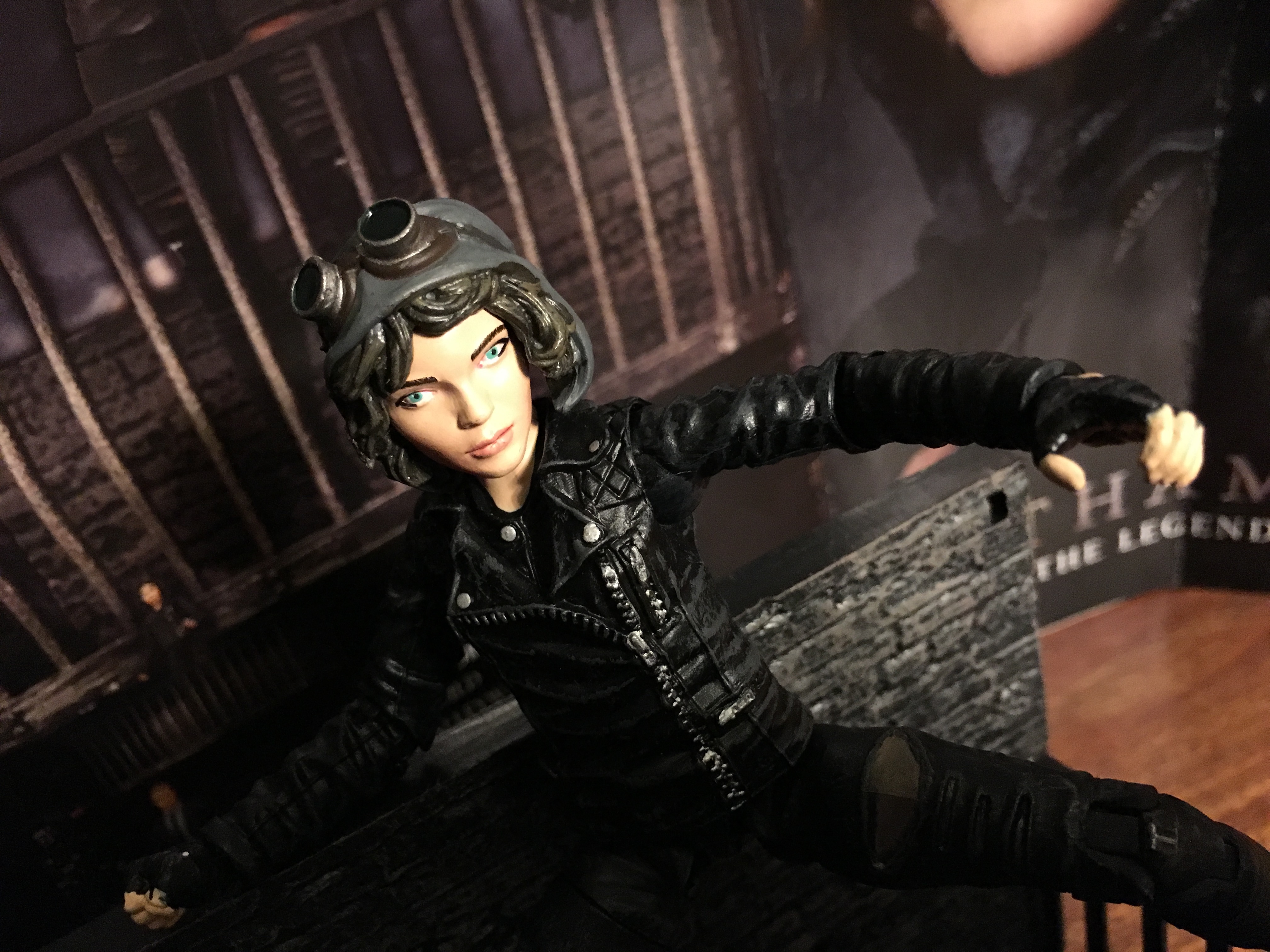 Selina’s diorama is the best of the three in this wave, by the way. She gets a fire escape that allows her to skulk above the action and observe the goings on below. Oh, and a jug of milk! 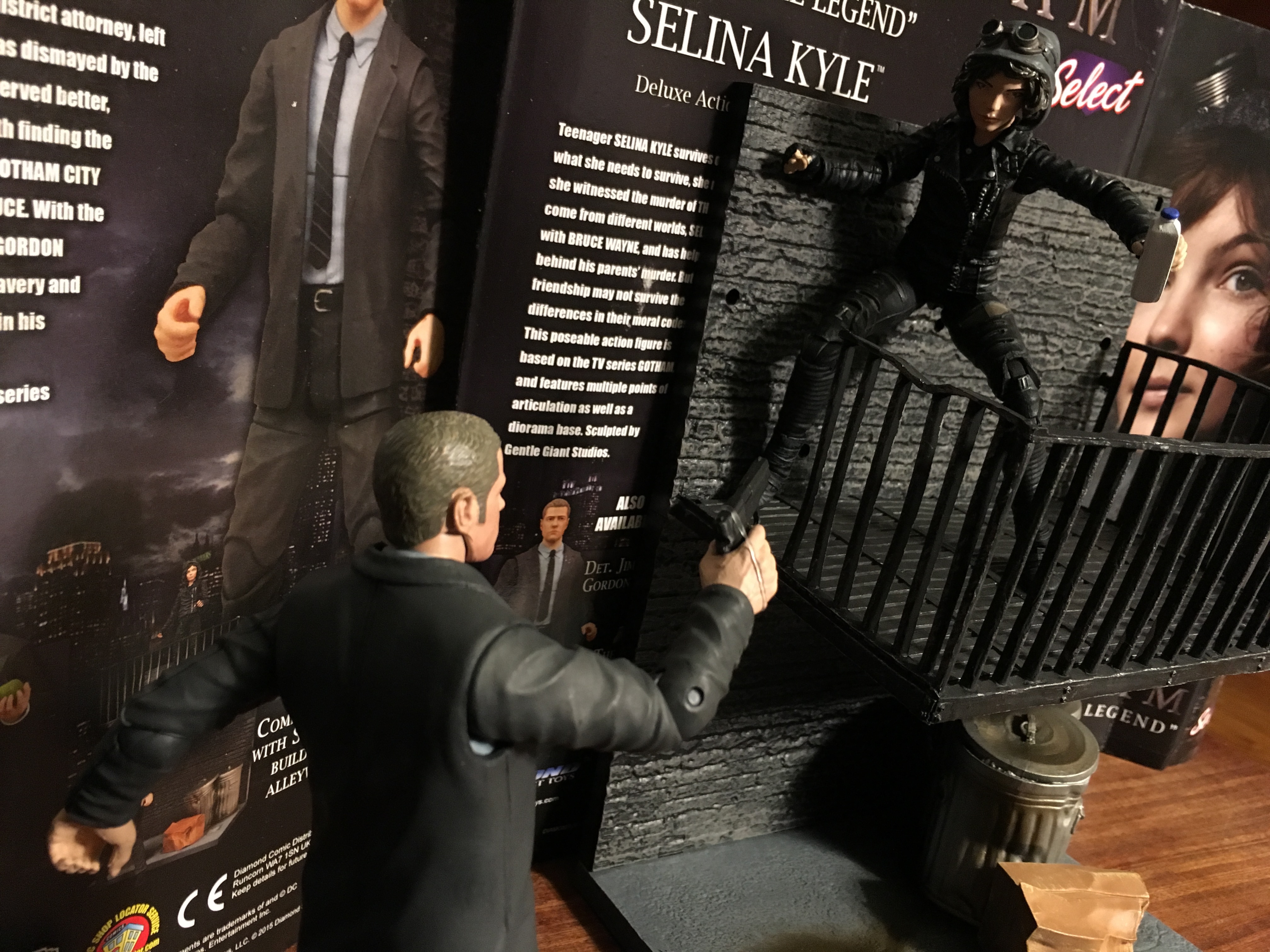 Robin Lord Taylor has been the breakout star of the show, the character everyone was talking about in Season 1, so it only goes to figure that Diamond would ensure that he be part of Wave 1.

Personally, and because I’m old-school like this, I’ll never quite get used to a skinny Penguin, especially since his name is so connected to his portly build. But the action figure is a terrific representation of Taylor’s bird of bad intent. 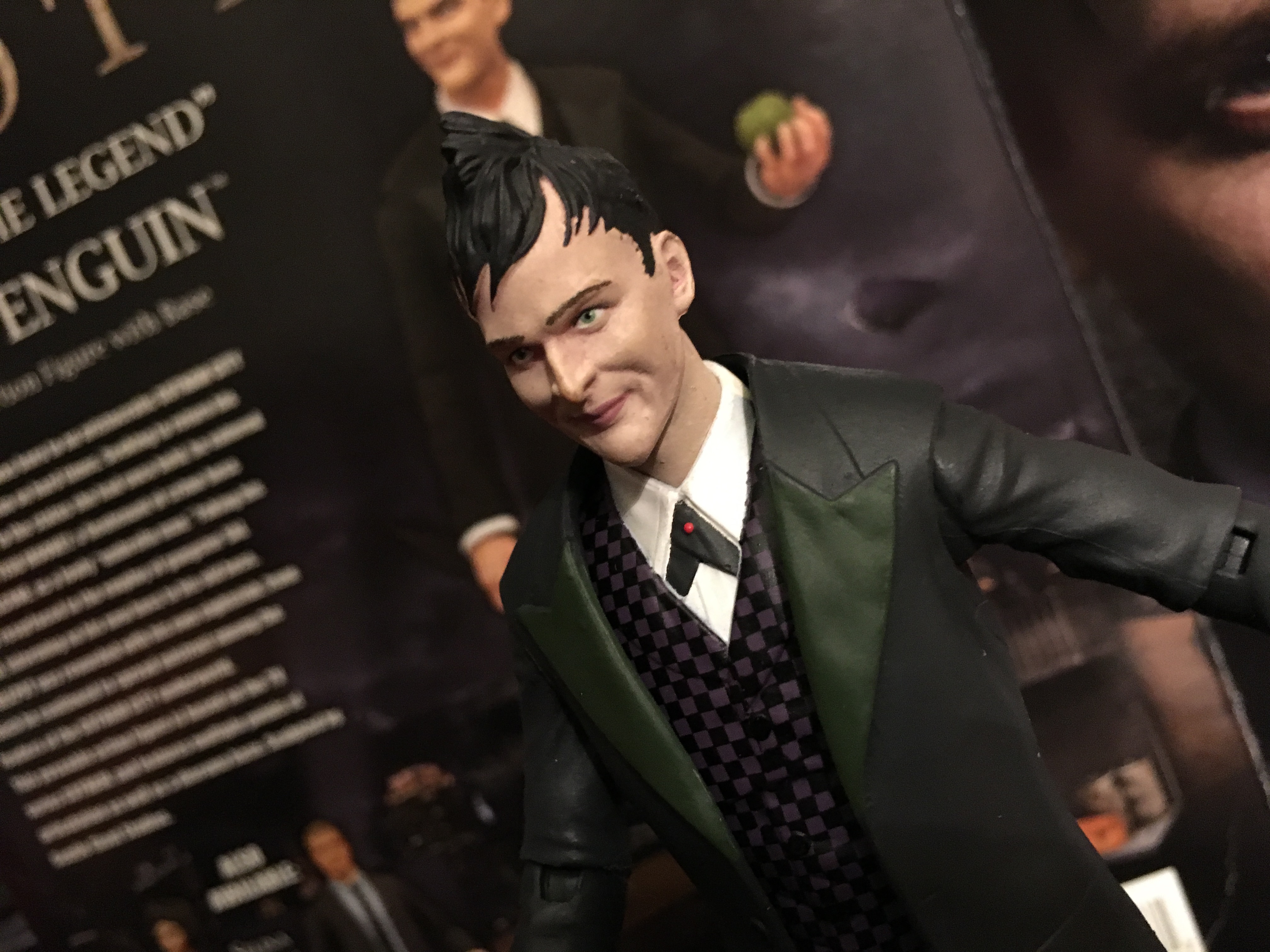 He’s got the creepy, matted hair, the sniveling sneer and the antiquated threads. He comes with a second set of hands, an apple and a pier so that you can re-enact the scene where Gordon doesn’t execute him (thus setting up so many problems down the line …). 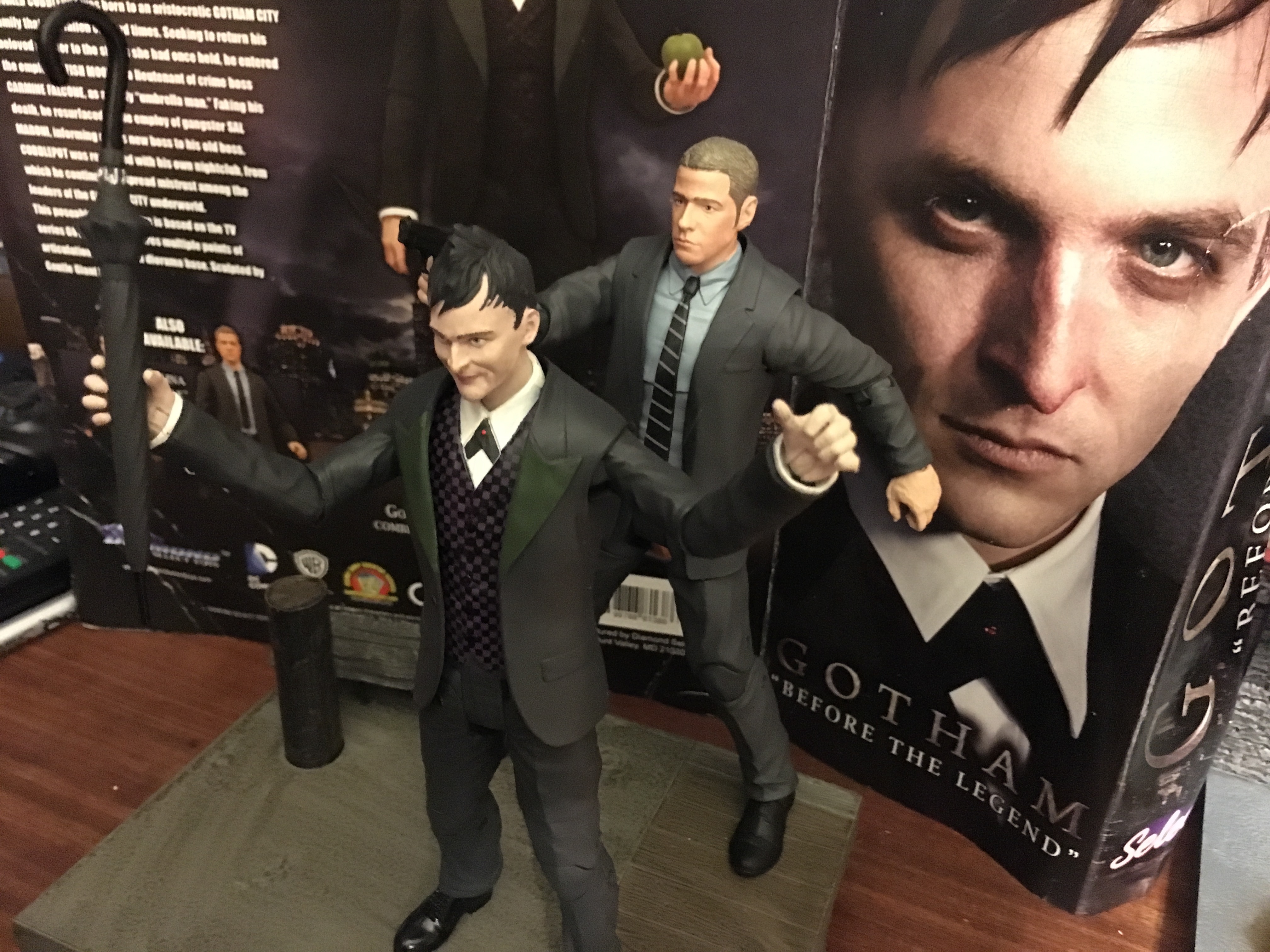 The next wave is set to be Alfred, Edward Nygma … and Bullock, which I think is the first Bullock figure anywhere, anytime. But it does beg the question: Where’s Young Master Bruce? Even David Mazouz doesn’t know — or at least he didn’t when I talked to him about it. Then again, he may be the world’s only “billionaire” without an XBOX, so … 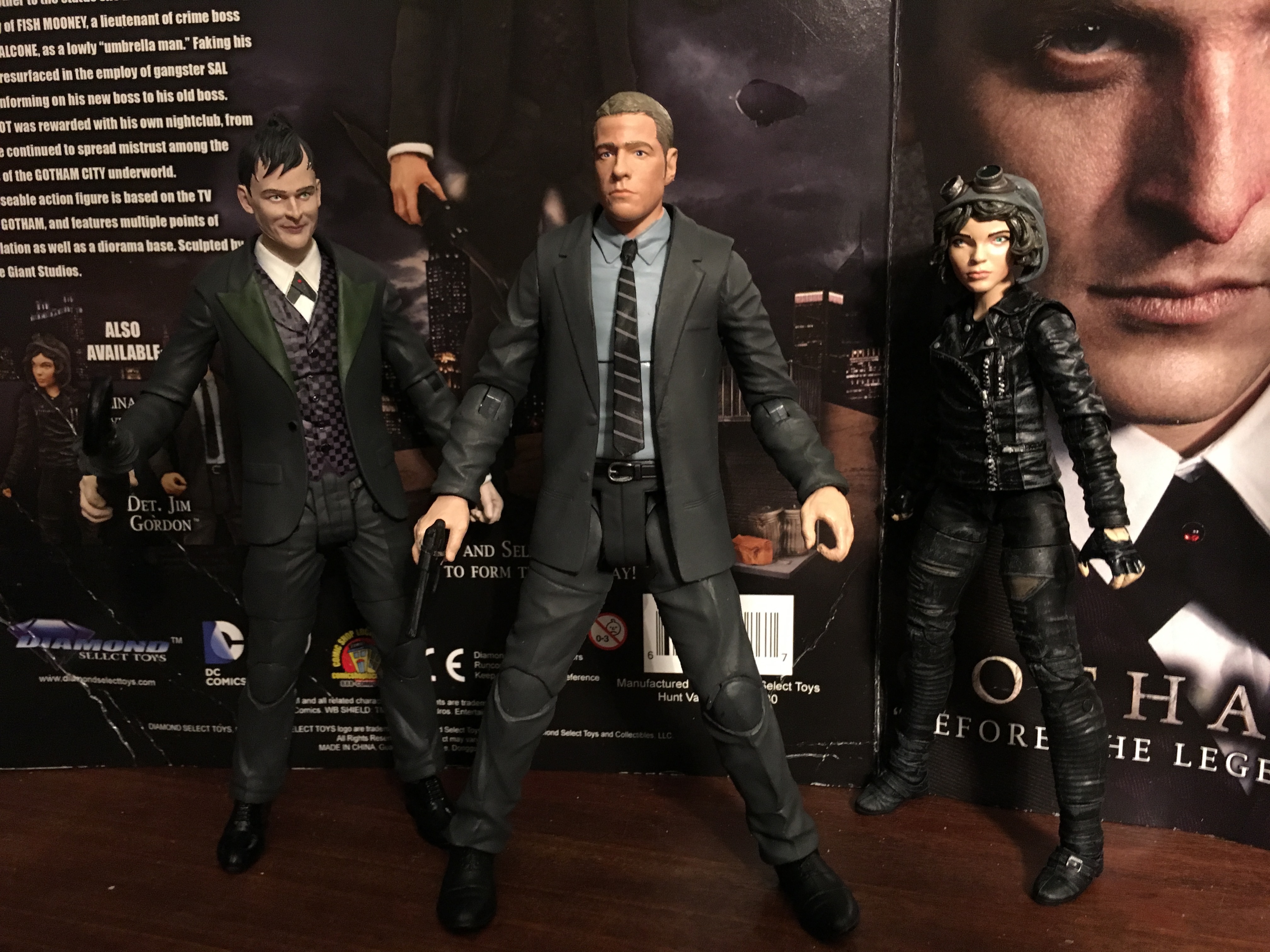 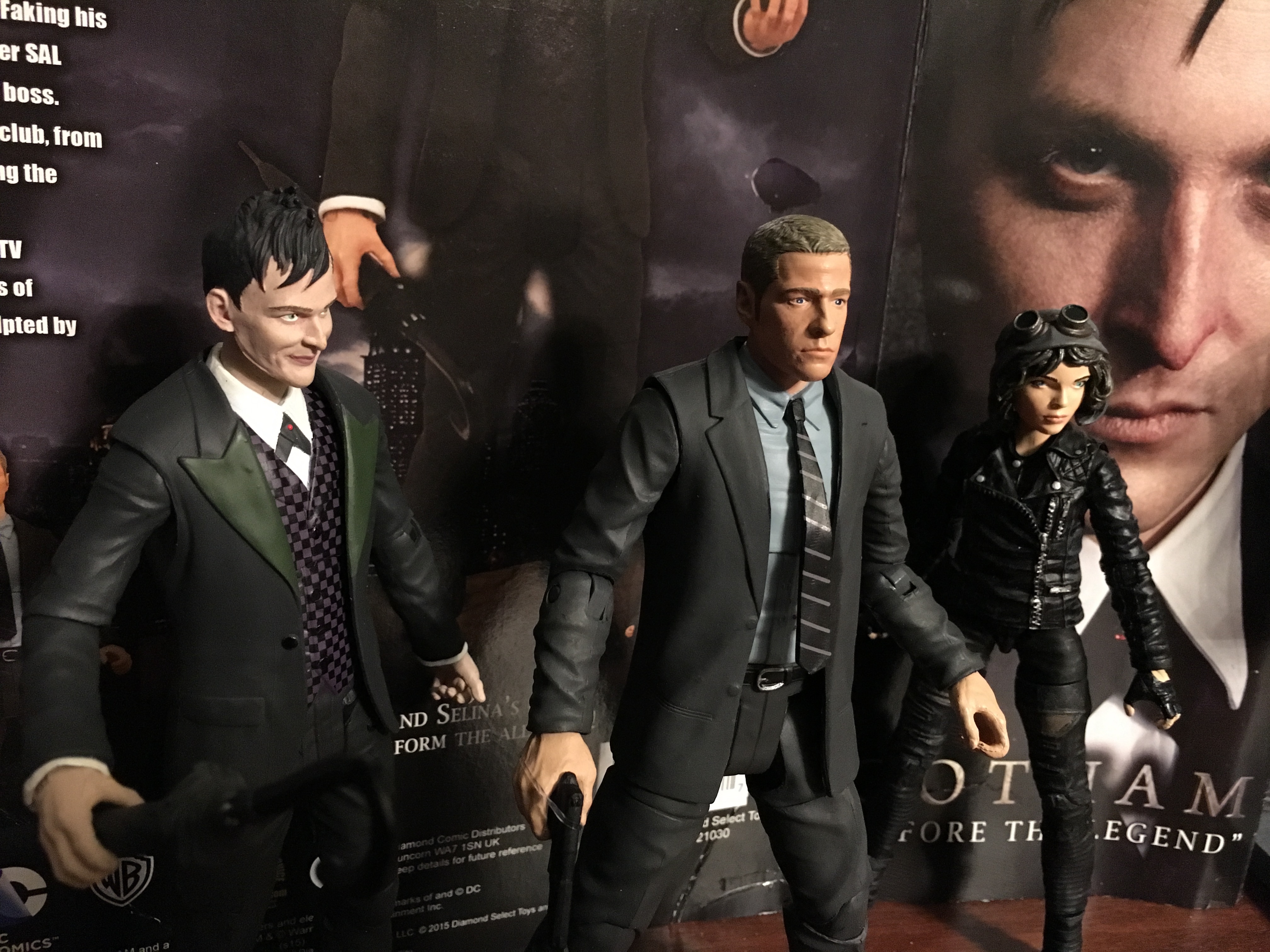 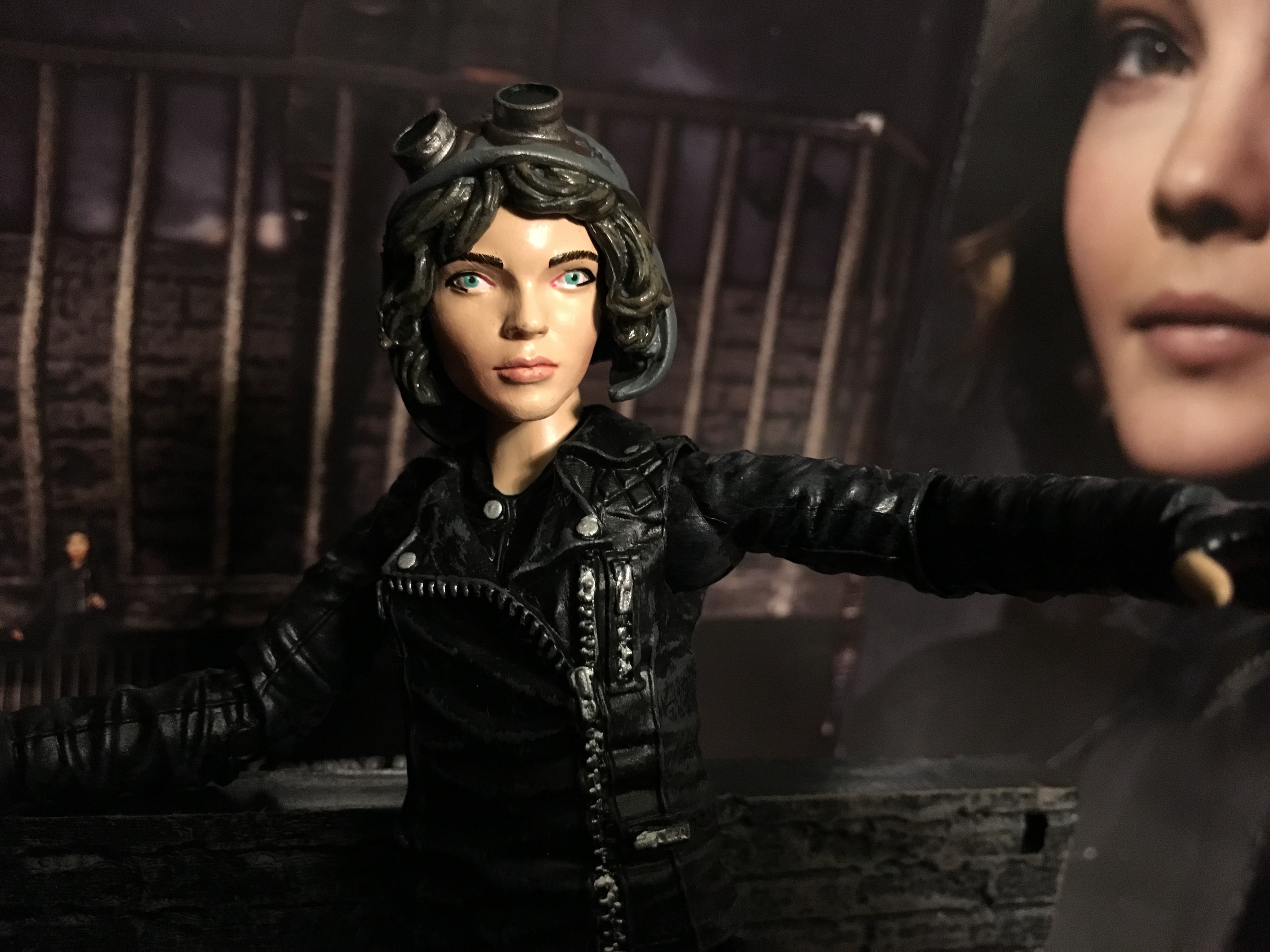 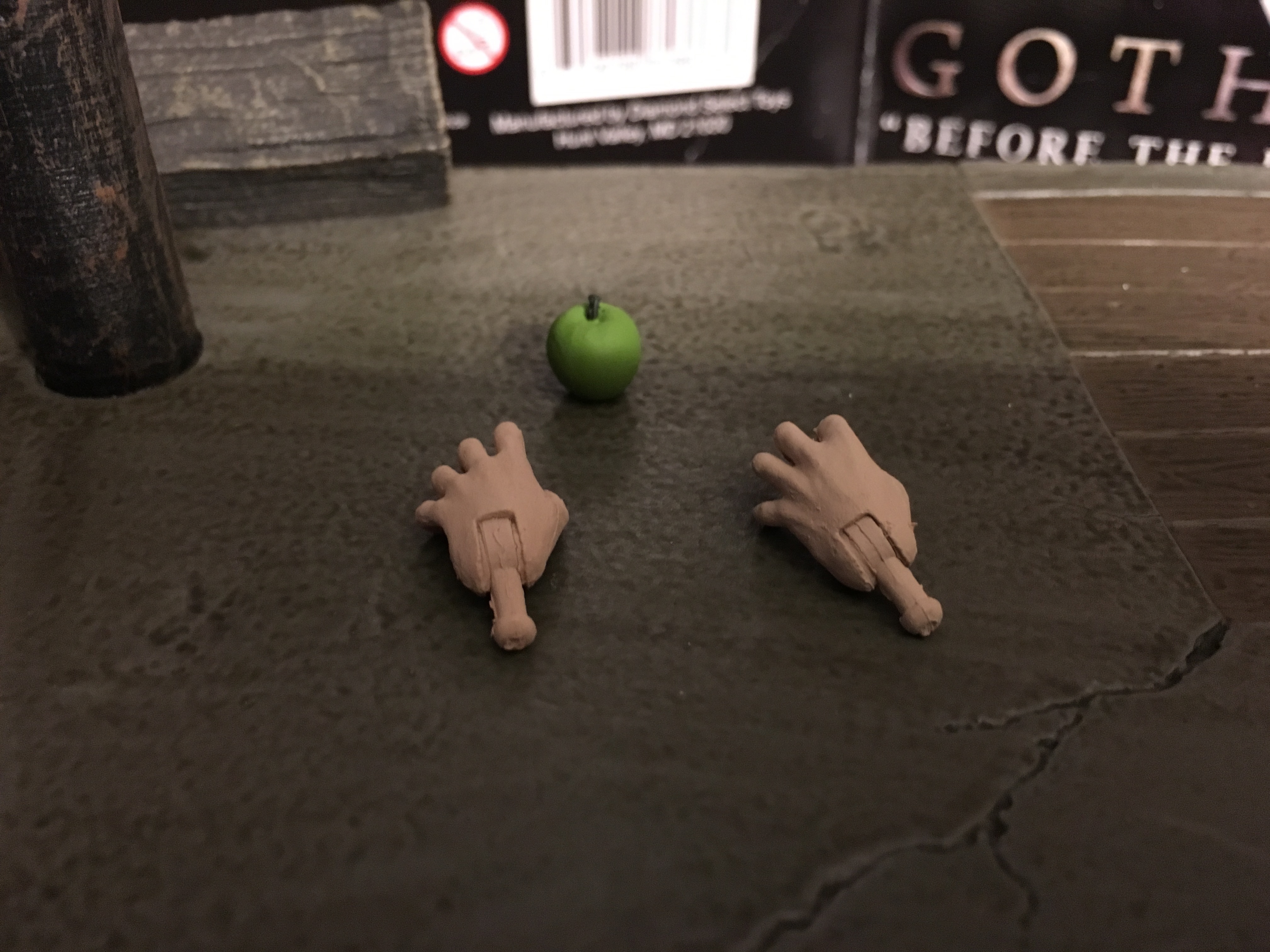