MERCH MADNESS: These cult-fave characters make for a mighty slate of action figures.

It’s all about the look and the aesthetic of the figures themselves. There are 10 of these 4.5-inch, Secret Wars-inspired figures in the first wave, including seven public-domain heroes from the ’40s who’ve popped up now and again in the intervening decades: Black Terror, Daredevil, Silver Streak, Green Turtle, Stardust, Amazing Man and Champion of Mars. 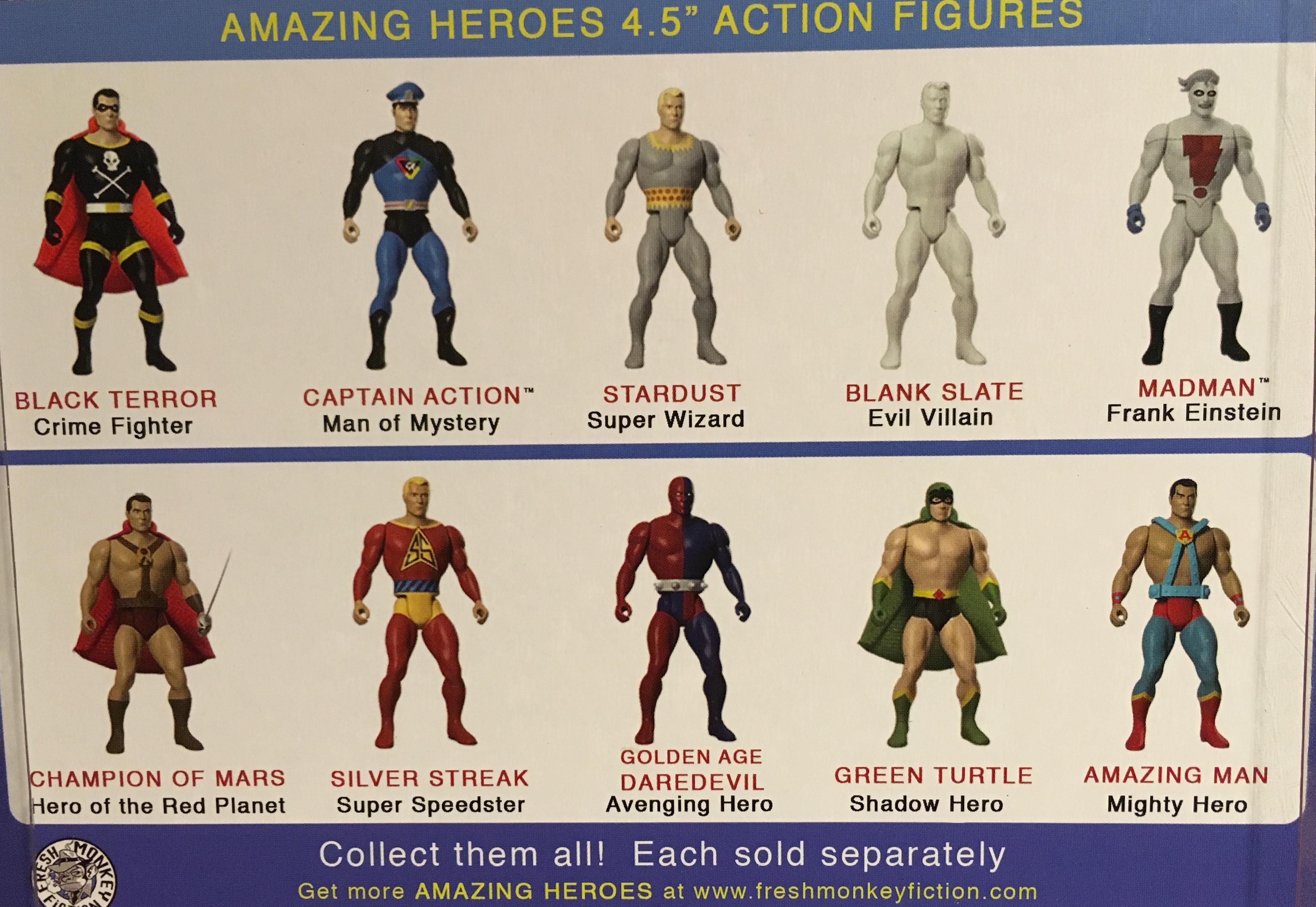 The packaging on these figures is ingenious. Each comes in his own clamshell with backing card. But while other companies offer re-sealable clamshells, Amazing Heroes makes it especially easy to get the figures in and out — and there are three cards to choose from: generic, character-specific with classic art and Artist’s Edition, featuring the work of some of today’s top talents like Allred, Sonny Liew, Gene Luen Yang and Tim Seeley. (Check out Fresh Monkey’s website for pricing and availability. Each figure is in the $15-$20 ballpark.) 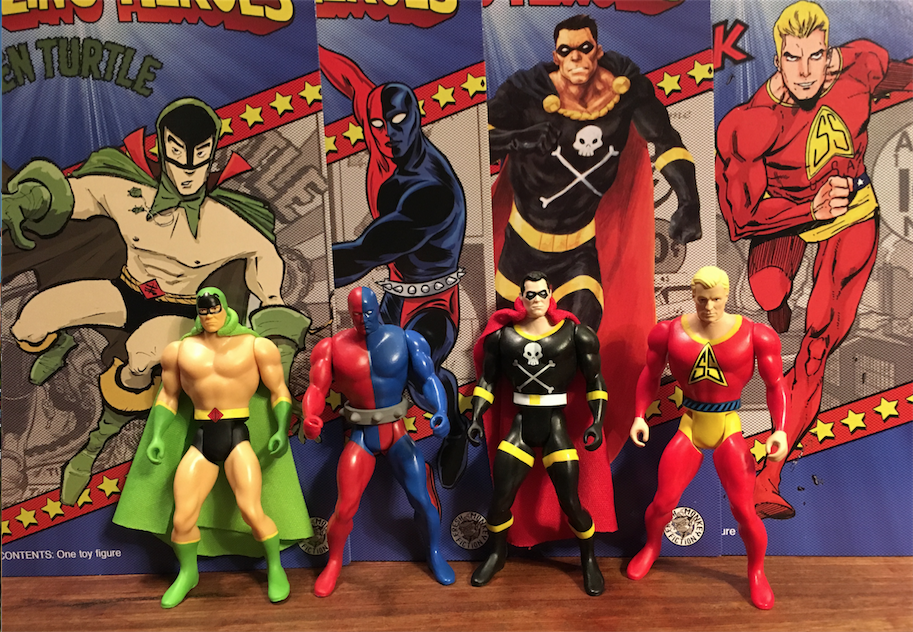 Over the next few weeks, as part of MERCH MADNESS (click here for more on that) I’ll be focusing on a few of these guys at a time. And I’m starting with my two favorites: Black Terror and Daredevil. 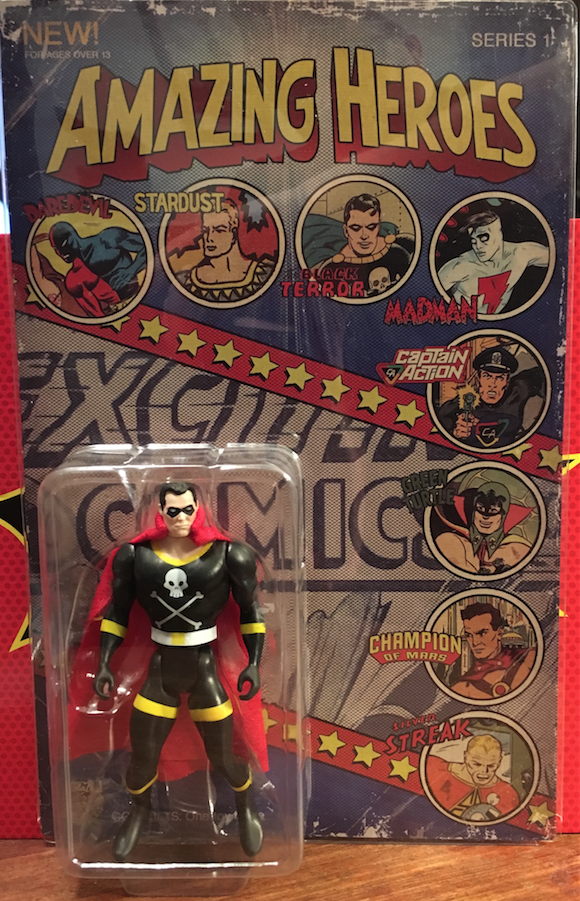 I first encountered both of these guys on the cover of Steranko’s History of Comics (which I wrote about here) and I know virtually nothing else about them other than they’ve been revived by Dynamite in recent years. But so what? The character-specific card backs have brief bios and it’s not hard to track down examples of their original stories online.

In fact, I found out that Daredevil actually lived in a mansion in New Rochelle, N.Y., which is not far from 13th Dimension’s secret lair.

This is really about design. When I first saw Black Terror all those years ago, I thought he was a bad guy, because why wouldn’t you? I mean, he was one badass-looking costumed tough guy and it just goes to show you that even a great outfit wasn’t enough to keep a hero afloat at the twilight of the Golden Age. 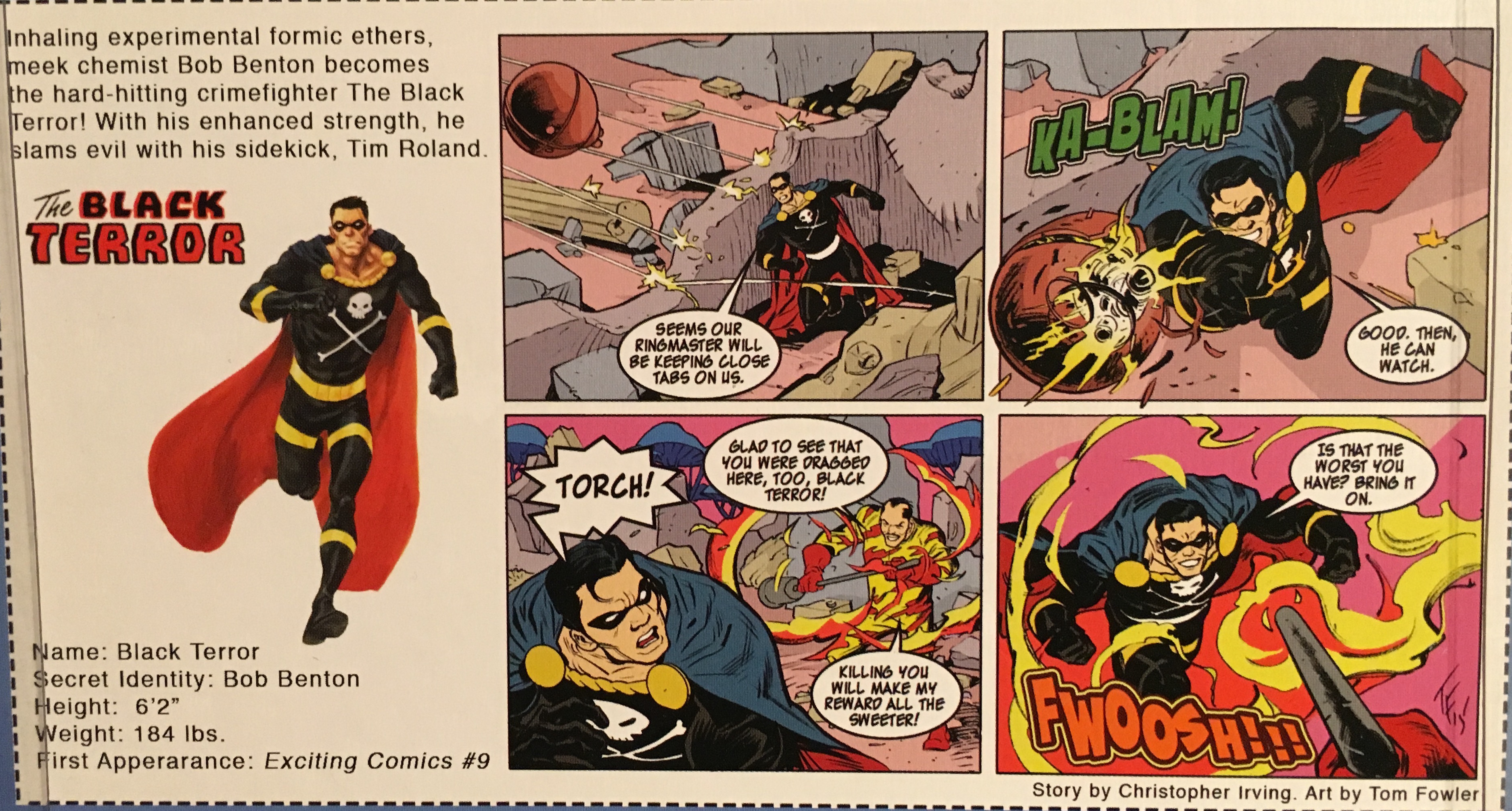 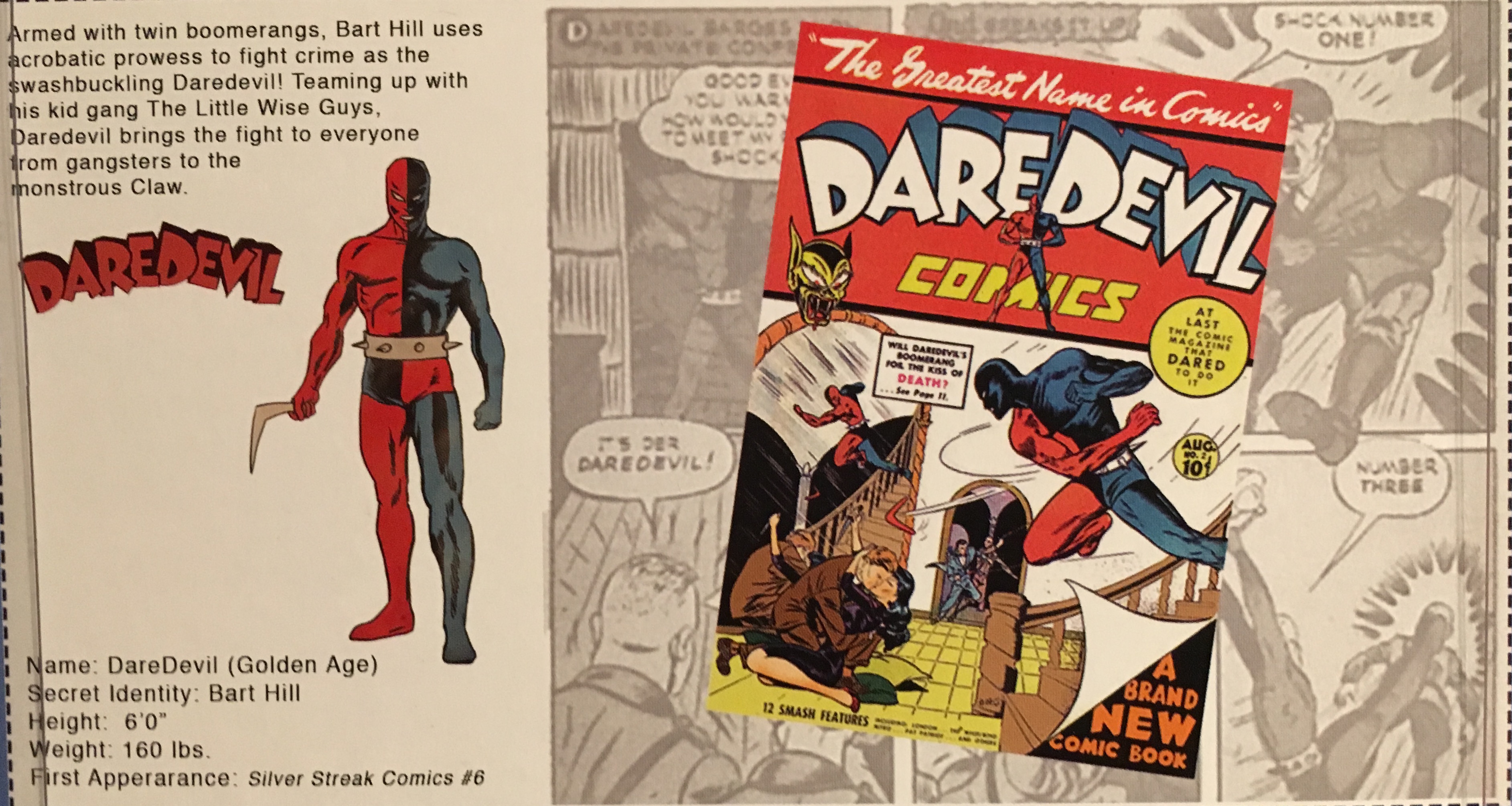 Same holds true for Daredevil, whose simple concept is great looking nonetheless — even if his pointed belt isn’t exactly practical. As in the comics, this ‘Devil has a boomerang. (Two would have been better but I’m not greedy.)

As far as the card backs, the Artist’s Editions feature Black Terror by Tom Fowler and Daredevil is by Allred. Excellent pairings in each case. 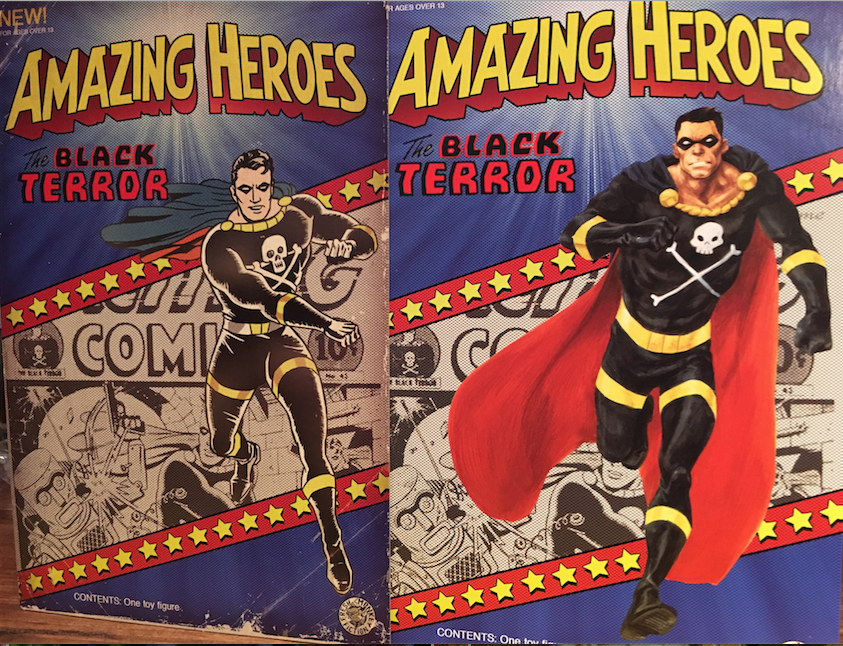 The retro card on the left features an aged look 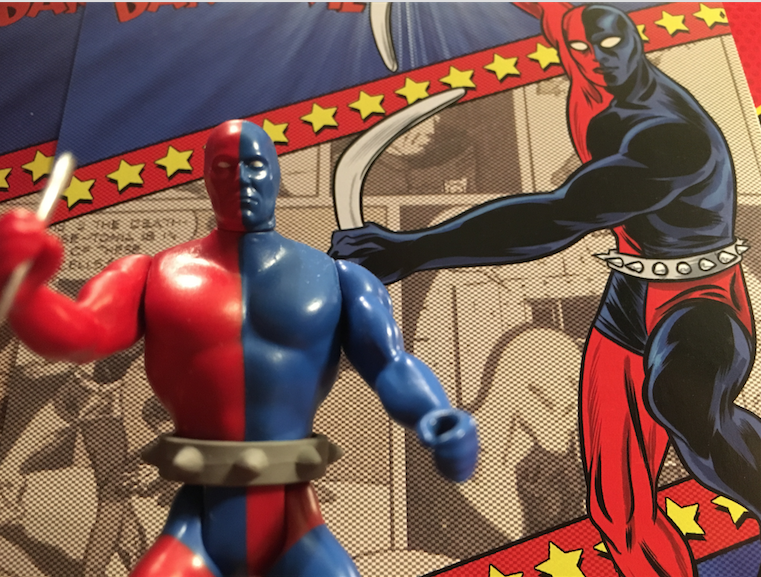