Finally, Marvel gets into the Mego replica game. 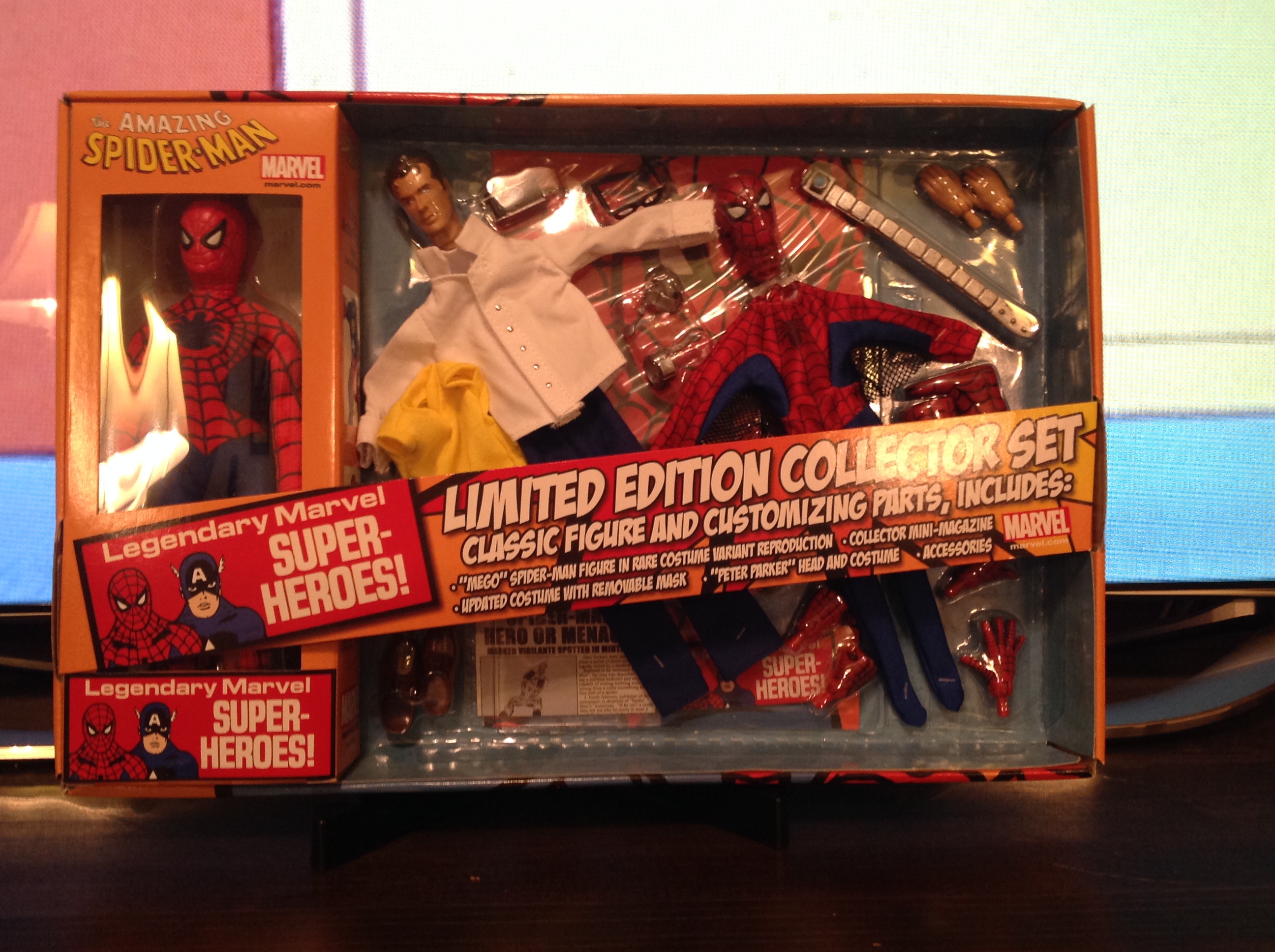 Pix by Sam Greenfield, except Updated Spidey and the POTA package, which I found on the, ahem, web.

Years ago there was a store in Manhattan’s East Village called Love Saves the Day. It was a shop filled to the rafters with kitschy ephemera both cheap and expensive.

All the way in the back, past crowded clothes racks and behind faded glad rags hanging from the ceiling, was an alcove with glass cases. And inside the cases were the relics of my youth: Megos, priced at hundreds of dollars.

I rarely, if ever, bought anything there but whenever we were in the neighborhood, I’d insist we stop in, just so I could peer through the glass and imagine I still had my Megos.

Then EMCE came along (via Diamond), with their Planet of the Apes and Star Trek replica Mego figures. I snapped them up. The World’s Greatest Super-Heroes line was my favorite as a kid, but I’m a big Star Trek and Apes guy — and just having the chance to buy ANY Megos as if they were new was cause for celebration. 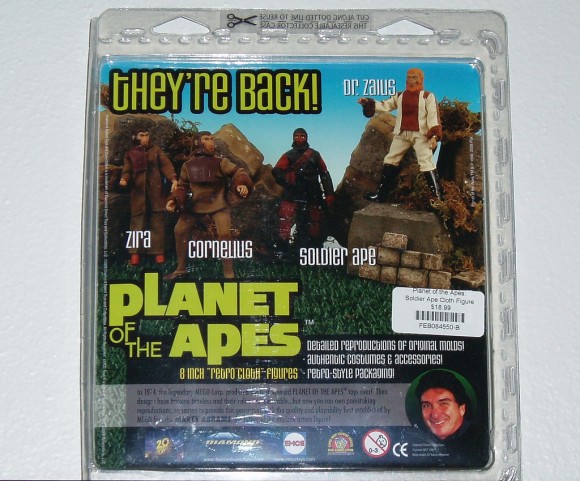 Mattel followed with their failed DC line, which I never really warmed to. Figures Toy Company fixed — and improved — that situation with their DC and Batman ’66 lines, which I’ve been obsessed with on this very website.

But Marvel‘s been in the cold. No Spidey or Cap, or any of the others that filled out that part of MegoWorld.

This week, Diamond Select Toys, teamed with EMCE, shipped the first in a series of deluxe sets that replicate those 8-inch figures so emblematic of the 1970s childhood. 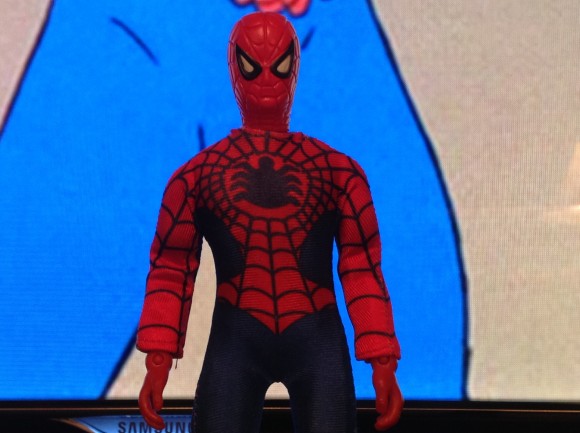 I had Spider-Man when I was a kid. And it’s nice to have him back, once again.

Unlike Figures Toy, which has been churning out waves of $25-$35 figures — plus a more expensive, great Batman ’66 accessory set — Diamond is taking a more upscale and deliberate approach. Only four figures have been announced so far — Spidey, Captain America (the only other Marvel Mego I had as a kid), Thor and the never-before-produced Wolverine.

They’re packaged as larger-scale $80 sets, with a classic Mego replica accompanied by changes of clothes and a raft of accessories.

The packaging is attractive. Spidey comes in a replica window box set in a tray, which lays out a Peter Parker interchangeable head and requisitely dorky outfit, and a second Spider-Man outfit, billed as an “updated” costume. 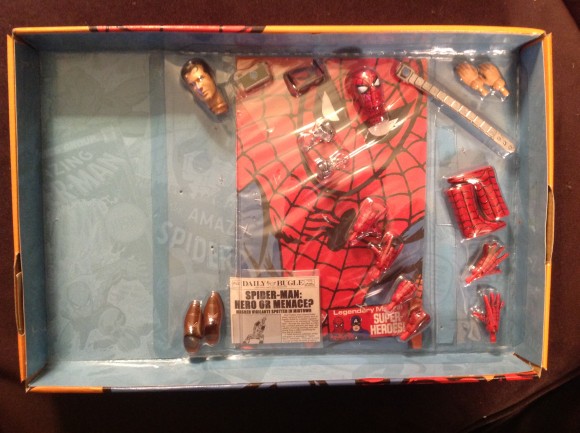 You get accessories like webshooters, the rarely seen utility belt, changes of hands, glasses, a camera, even a Daily Bugle. In essence, it’s three figures in one — surrounded by imagery that mimics Mego‘s original orange-backed Spider-Man graphic packaging, but also gives you glimpses of Silver and Bronze Age Spider-Man comics. There’s also a nice mini-magazine that gives you the history of both Mego Spidey and this project.

But good lord was it difficult to get the items out of the tray. I tried as hard as I could to preserve the tray but getting the plastic off the accessories inevitably led to tearing. The window box, on the other hand, is magnificent. 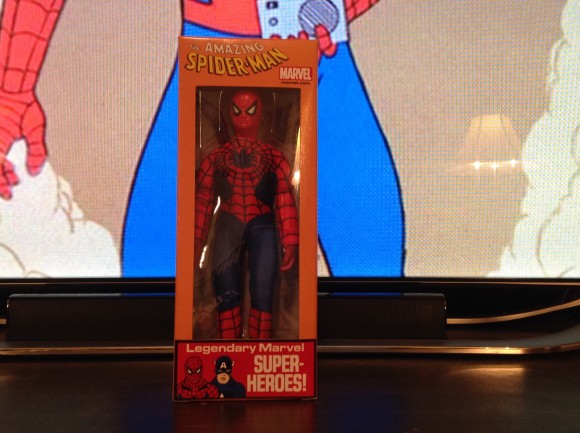 Diamond and EMCE made an interesting choice here, going with the so-called circle chest version of Mego Spidey. On a strictly personal level, I would have preferred the more accurate version; I never liked the circle version and thought it distracted from what was one of Mego‘s nearly perfect figures. But the head sculpt is dead-on accurate, so I’ll make allowances.

This is where they opted to go with the more standard chest design. I understand the thinking — there’s no real point in offering two outfits that look too much alike. So go with the circle design on classic Spidey and the more traditional design on the second one. Add web wings, a more modern-looking head and a lighter color scheme. Got it. (Though the boots should have been screened on.) I prefer my Mego replicas to hew as closely to the original as they can — I love that simplistic aesthetic — so I don’t see my Spidey wearing this version all that much. It’s perfectly fine if you want the option, however. 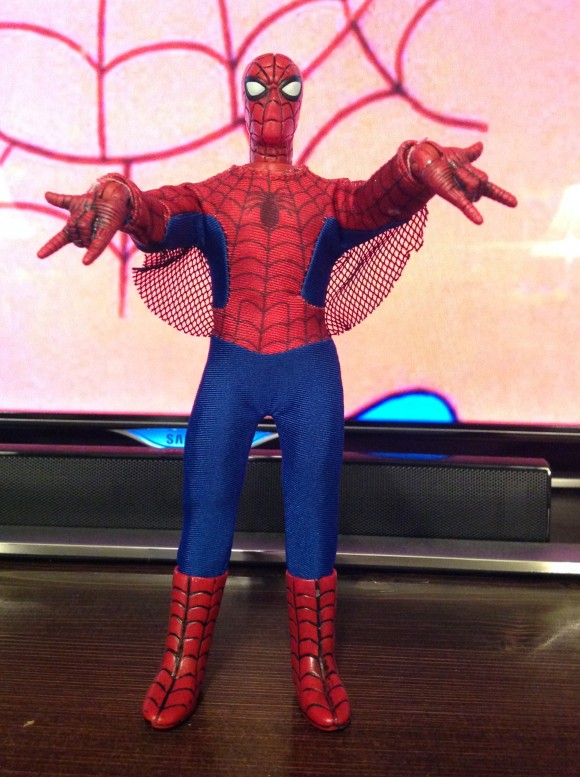 Now this I dig, conceptually speaking. I am a sucker for secret-identity figures. An absolute sucker. And here you basically get two — Romita Petey with his Golden Age Robin hair curls, and Ditko Petey, which is the same head after you put the glasses on. Add blue slacks, white shirt, yellow sweater vest and brown shoes and you have everyone’s favorite mid-century nerd.

I will say it was very difficult to get Peter‘s outfit on — and then he kinda looks like he needs to drop a few pounds. There are also gonna be a lot of angry folks with ripped yellow vests if they’re not careful. Probably better if Petey left that in a drawer. 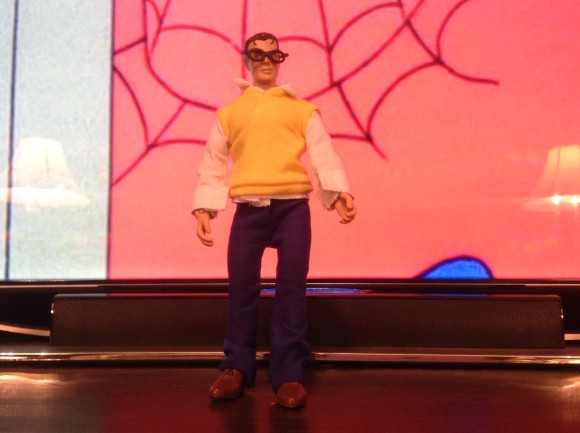 I look at this line with a bit more of a critical eye given its price point. $80 is going to make a lot of potential buyers think twice. But this is a project that deserves a lot of credit. It’s high quality — the figure itself is very sturdy — and there’s an attention to detail that conveys a real love of Megos.

I’m glad Spidey‘s back on my shelf — and I can’t wait for Captain America to join him.