In every sense of the word, Batman #51 is an epilogue, the final word on an acclaimed 4 1/2-year run by Scott Snyder and Greg Capullo.

This Dynamic Duo has treated fans to some of the most gripping Batman comics in years: Mostly it’s been a life-or-death struggle not just for Batman’s mind but for the soul of Gotham itself.

The finale ties up loose ends, includes callbacks to moments major and minor, and neatly gives context to where Snyder and Capullo as creators, and we as readers, fit into Batman’s history.

The writer and artist, for example, post a giant Court of Owls emblem in the Batcave, along with longer-tenured trophies like the giant penny and the dinosaur. They’ve earned that indulgence.

But at the same time, they made sure to more or less put the toys back where they found them: Alfred gets his hand returned, Gordon, though seen mostly in shadow, has devolved to his middle-aged, wiry physique, mustache at full brush. 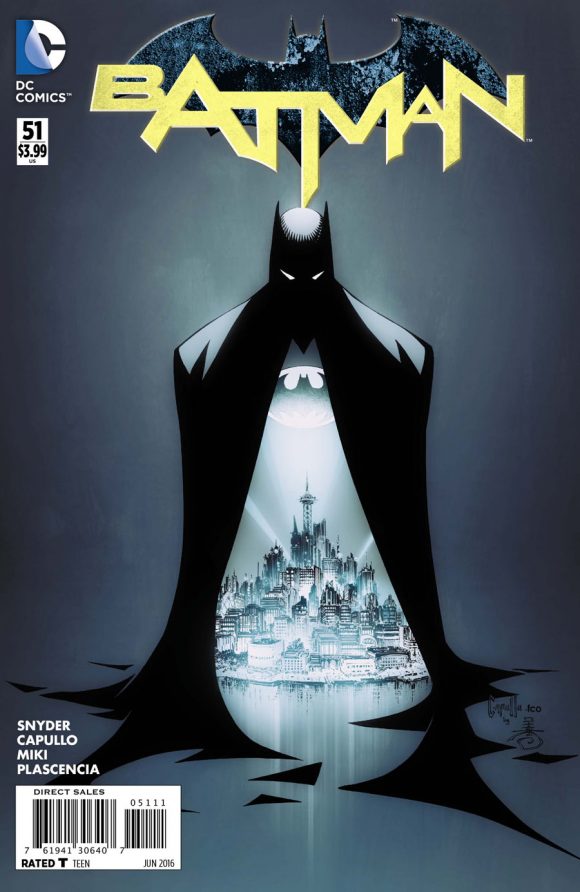 The story’s premise is simple: Gotham has a blackout and Batman has a surprisingly quiet time of it, gliding about town in his new Batmobile below or hitting the rooftops above. There’s one false alarm after another, including an Arkham showdown that echoes the one from Batman #1, only with a very different result.

The action, such as it is, parallels the latest “Gotham Is…” newspaper column referenced over the last several years. This is a conceit that allows Snyder to put a literary sheen on it all, while affording him an outlet to address readers in an oblique way, providing commentary on the relationship between creators and readers.

Throughout, the narrator or the characters themselves point out all that’s changed: Batman has a new outfit, the Court of Owls lurks among the citizenry, the Joker sits dormant on a park bench. And yet, nothing has changed at all: There will always be a Batsignal and a Batmobile (and there will always be a new one), a Penguin who plots, and inmates who, it’s understood, will always escape Arkham, newfangled security measures or no.

Snyder and Capullo respected Batman’s heritage and history while never being bound by it. They took chances and aimed high. And like the character who brought each of them new levels of stardom in the world of comics, they landed sure-footed, ready for the next adventure.

For 13 COVERS: The Best of GREG CAPULLO’s BATMAN, click here.

For where Snyder and Capullo stack up against creative teams of the past, click here.