Scott and Dan — along with guest Anthony Durso — hit up the comics racks from 42 years ago!

This week for RETRO HOT PICKS, Scott Tipton and I are joined by Anthony Durso — 13th Dimension contributor and owner of The Toyroom and Retropolis Tees — in selecting comics that came out the week of April 14, 1979.

(Keep in mind that comics came out on multiple days back then — as has become the case now. So these are technically the comics that went on sale between April 11 and April 17.) 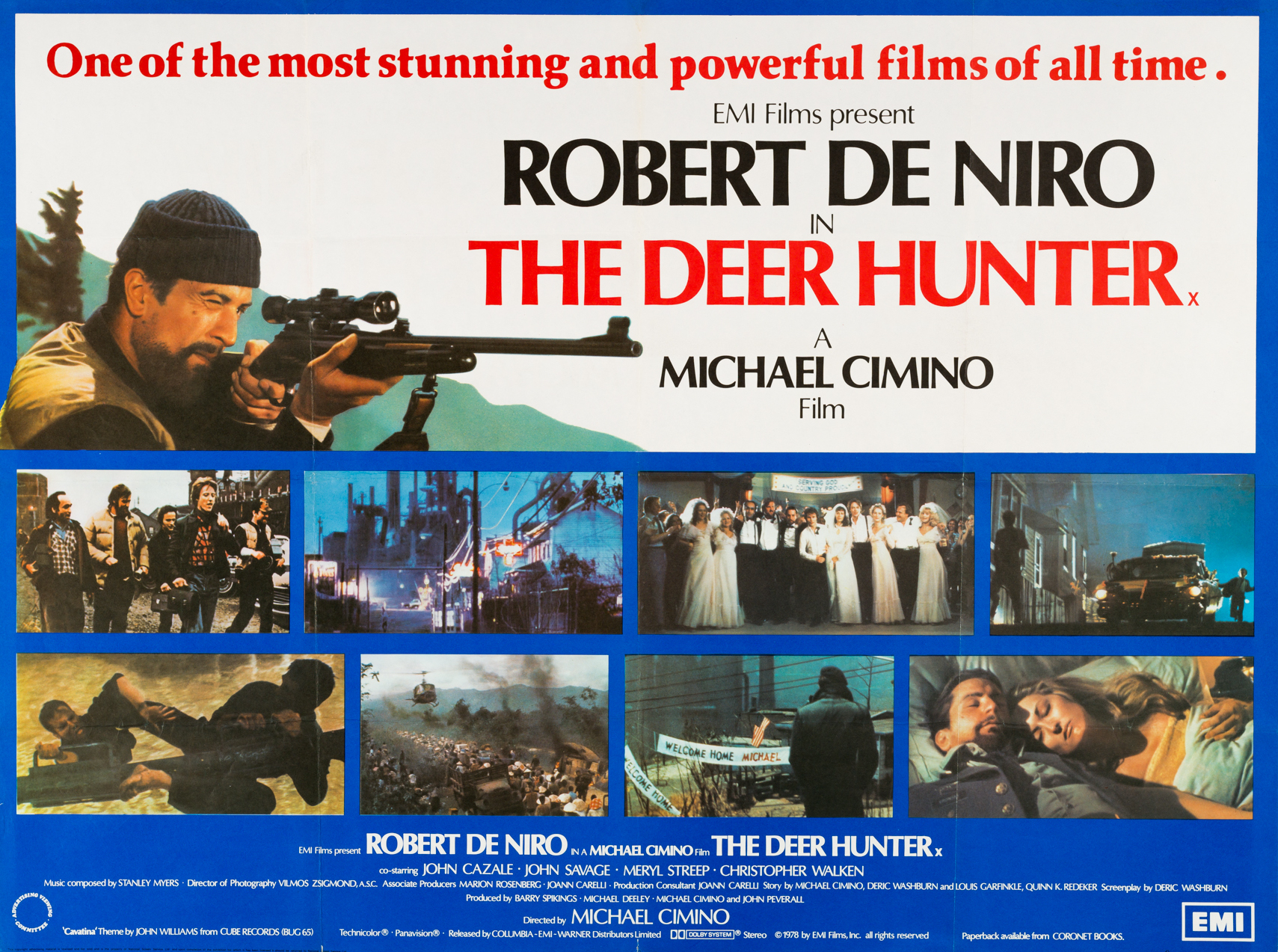 So let’s set the scene: Jimmy Carter was president. Another of the great ’70s films was No. 1 at the box office: The Deer Hunter. It’s one of those movies that you need to see but you’ll never want to watch it again. It had been out for a few months but it took awhile to reach the top. That wasn’t uncommon in those days but it was probably helped by the hype leading into the Oscars, where it won Best Picture. The Academy Awards telecast, by the way, was the top show in the Nielsens that week. (Three ABC sitcoms were also wildly popular at the time — Three’s Company, Mork & Mindy and Laverne & Shirley.)

The Doobie Brothers’ What a Fool Believes was the best-selling single, but two fantabulous disco tunes were also in Billboard’s Top 10: I Will Survive by Gloria Gaynor and Knock on Wood by Amii Stewart. Minute by Minute by the Doobies was also the No. 1 album. Runner up? Dire Straits’ eponymous debut, which was actually released the previous year. The ’80s were right around the corner, folks.

Adventure Comics #464, DC. Out of all the Dollar Comics of the era, Adventure Comics was my favorite. I think it was the variety. In addition to his monthly adventures in his own title, the Flash, a perennial Bronze Age favorite, was the lead feature in this run. Another favorite of mine, Deadman, didn’t have his own title, but his appearances here, as well as guest-star spots in Brave and the Bold and DC Comics Presents, solidified his status with me. When the Justice Society of America’s main title (All-Star Comics) was cancelled, they made the jump to Adventure Comics, and it was in those pages that the Earth-Two Batman died. The Bronze Age JSA appearances were my introduction to Earth-Two and all things multiversal and I grabbed every issue I could. Rounding out the lineup was Aquaman (yet ANOTHER Bronze Age favorite) and Wonder Woman. I really was indifferent to WW back then and this was really my only exposure to the Amazing Amazon outside of her appearances as a member of the Justice League. 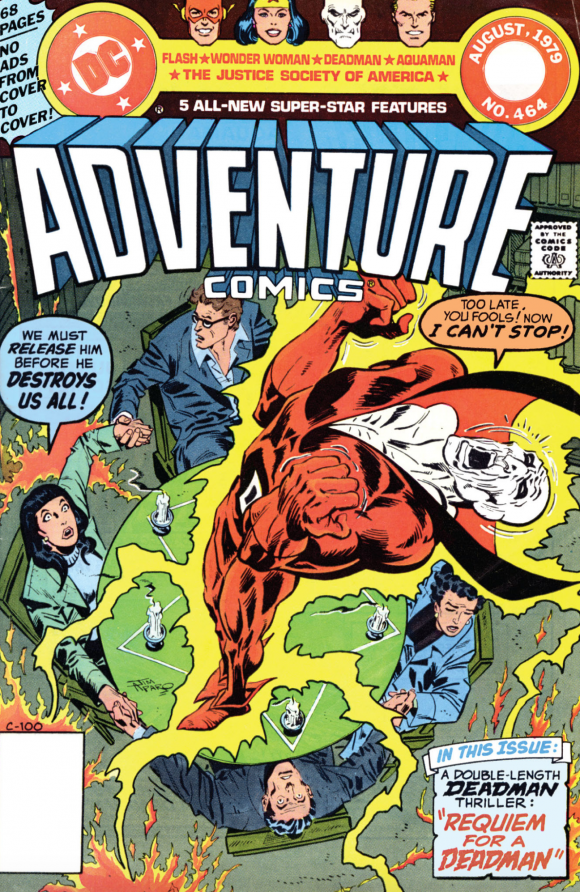 Scott adds: Look at that Jim Aparo Deadman! I woulda been drawn to that on the spinner like a mouse to cheese.

Justice League of America #168, DC. This is one I regretted NOT picking up numerous times over the years (initially I passed when I saw it on the spinner rack at Fay’s Drugs) as it was part of the infamous “JLA swaps bodies with the Injustice Gang storyline” that heavily influenced the plot of Identity Cri… um… never mind… NEVER happened! 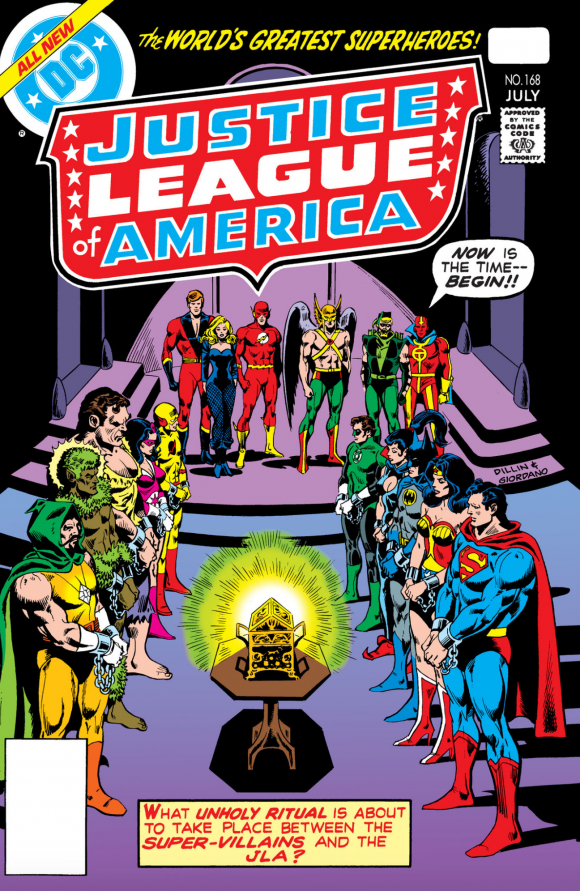 Superman Family #196, DC. Second favorite Dollar Comic title. What’s not to love? Superman. Lois Lane. Jimmy Olsen. Mr & Mrs. Superman. Supergirl. The Private Life of Clark Kent. Superboy. Back when you could have a complete story in 8 or 16 pages. Nothing padded out. And ALL for a DOLLAR! 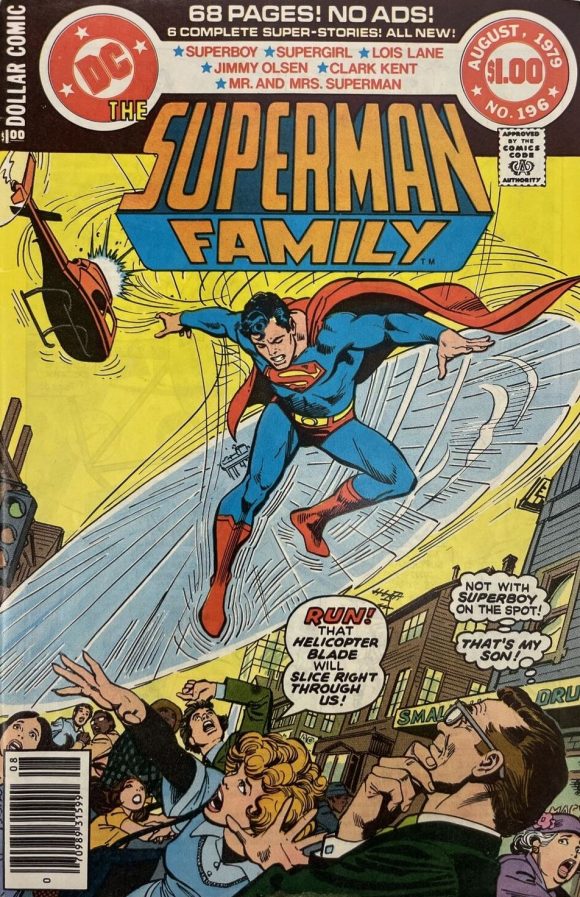 World of Krypton #1, DC. The miniseries that started it all for DC. This was originally scheduled for appearances in Showcase before that title got cancelled and they decided to let it run on its own. Good call. Because it led to The Untold Legend of the Batman, Tales of the Green Lantern Corps, Secrets of the Legion of Super-Heroes, Tales of the New Teen Titans, and many, many more. For me personally it came at a great time as I was obsessed with learning everything and anything about the history of the Man of Steel. 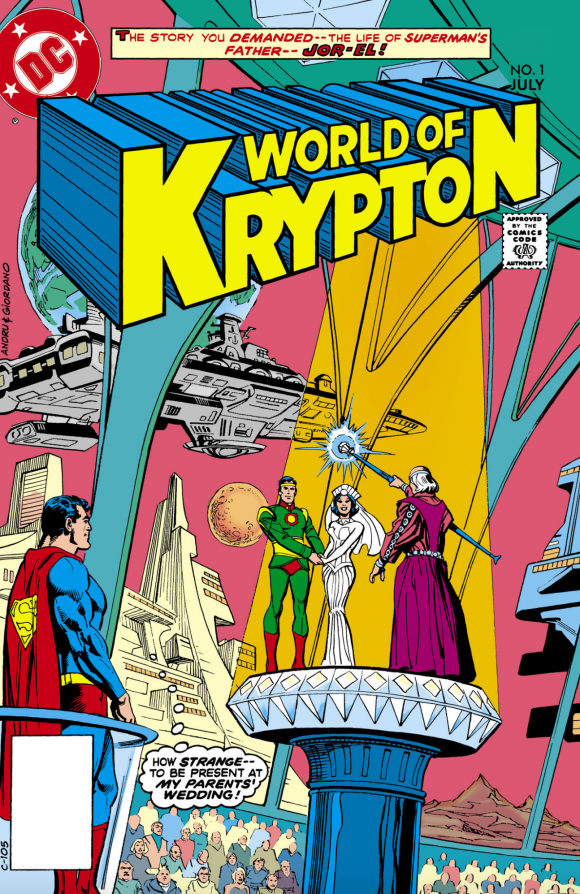 Conan the Barbarian #100, Marvel. An anniversary issue! That’s pretty much the only reason I needed to buy this issue, as I wasn’t a regular reader of Conan. In fact, when I DID eventually enter the Hyborian Age on a monthly basis it was over in the pages of the (more adult) Savage Sword of Conan. 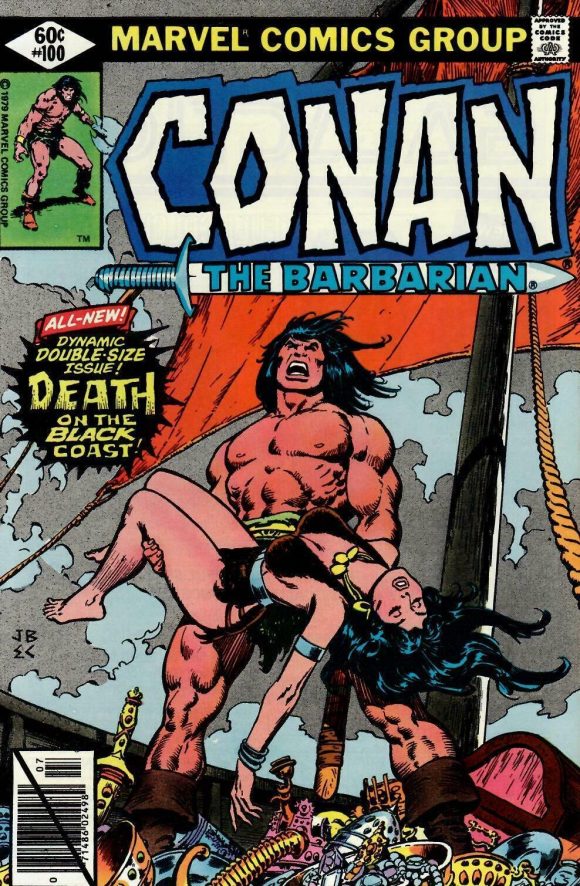 X-Men #123, Marvel. This era of X-Men (Claremont/Byrne/Austin) is definitely my sweet spot when it comes to Marvel’s Merry Mutants but boy were issues hard to find on the newsstand. This one, for example, escaped me and I originally read it as a coverless copy that a friend had in 6th grade. But don’t get caught! Because it’d wind up in Mr. Reeser’s desk and you’d NEVER get it back! 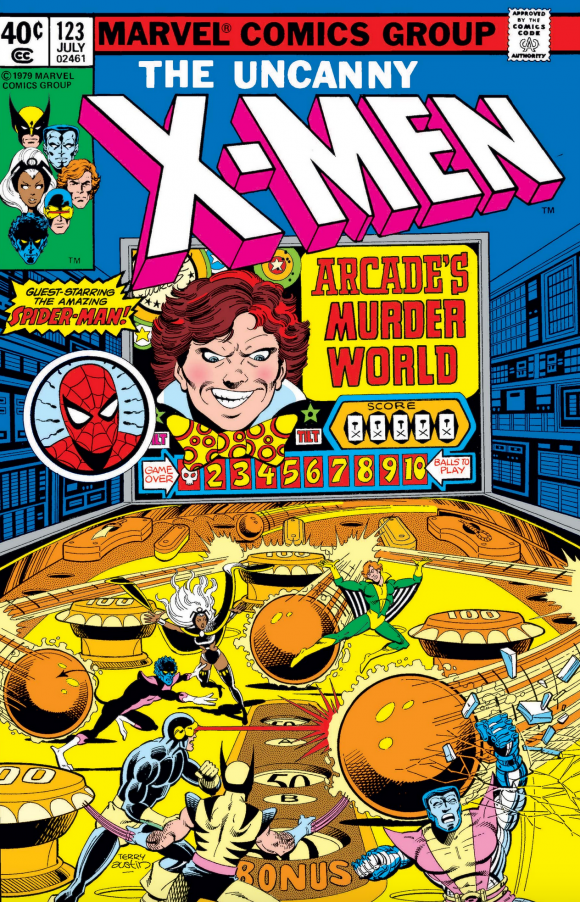 What I DIDN’T buy: If I could go back in time, I’d purchase a lot more of Looney Tunes, Woody Woodpecker, Archie, Richie Rich, etc. With the exception of a brief flirtation with the Riverdale gang back then, I was ALL about the superheroes. Once I was past a certain age, I never gave the “funny books” a chance. 🙁

The Flash #275, DC. This issue doesn’t get the credit it deserves for being historically significant, but I always mark this story, with the shocking and unexpected murder of Iris Allen, the Flash’s wife, as the point where the DC Universe lost its innocence. Nobody saw it coming. 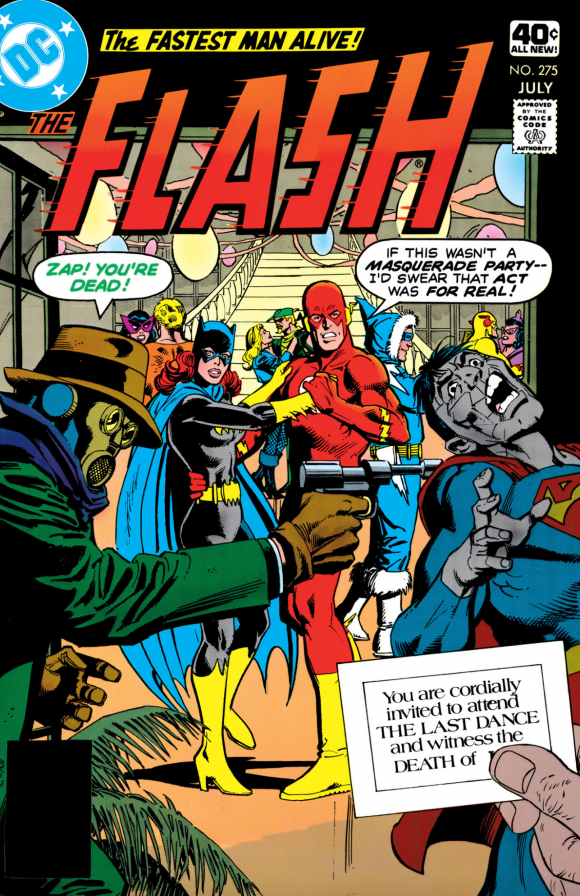 Anthony adds: As mentioned earlier, I was a big fan (i.e. monthly reader) of the Flash in his own title. Clive Yorkin. Flash groupie Melanie. Heroin smugglers(!). I was down for all of it. This issue, “The Last Dance” was my favorite of the period, not for the Death of Iris Allen, but for the superhero costume party. The cover is one of my favorites of the Bronze Age DC era as well. ZAP!

DC Comics Presents #11, DC Comics. The sight of Hawkman just whaling on Superman in the shadow of the Eiffel Tower really struck me as a kid. 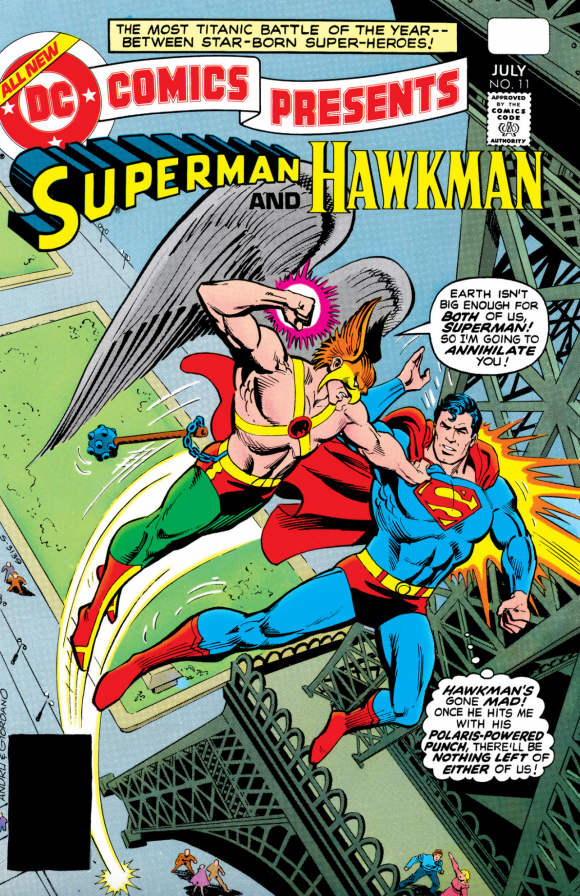 Anthony adds: During this era, I was a huge fan of Brave and the Bold and had a regular run of issues. DC Comics Presents seemed a little bit harder to come by back then but this is one of the issues I did manage to score. I always wished Hawkman kept his “Polaris Punch” as a super-power past this one issue.

Batman #313, DC. Len Wein does not get the credit he should for his Bronze Age Batman run. I’ve got more on that coming soon but this particular issue looms large with me because this was the spring and summer that I first made a real, bona fide effort to collect comics as they were released, as opposed to picking them up when I could. Batman #312-317 were central to that. By the way, Wein had a cute story to tell about this Two-Face two-parter and you can click here to check it out. 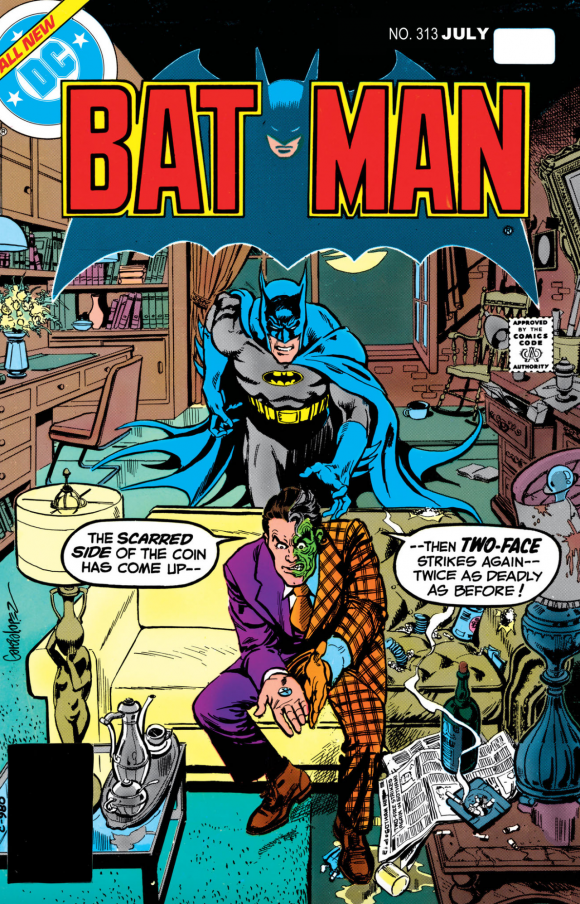 Anthony adds: This issue was in the middle of my Len Wein Batman era and it was an instant grab when I saw it on the newsstand, the fantastic cover by Jose Luis Garcia-Lopez being the immediate draw. It was this storyline featuring Two-Face that first introduced me to the phrase “binary code”. See, mom, comics are more than just “funny books.”

Godzilla #24, Marvel. See the new Godzilla vs. Kong? I dug it. It’s like a nutty Showa Era flick with modern effects. Anyway, this was the last Bronze Age Marvel issue — as the Avengers, SHIELD, the Fantastic Four and Spidey drive the King of the Monsters back into hibernation. Hell, who needs Thanos? This is the battle I want to see on the big screen. Love that Dave Cockrum/Herb Trimpe walking-off-into-the-sunset cover, too. Marvel Tales #105, Marvel. This reprint is from the thick of Gerry Conway and Ross Andru’s Amazing Spider-Man run. The original came out in late 1973 but it held up in 1979 — and holds up today! 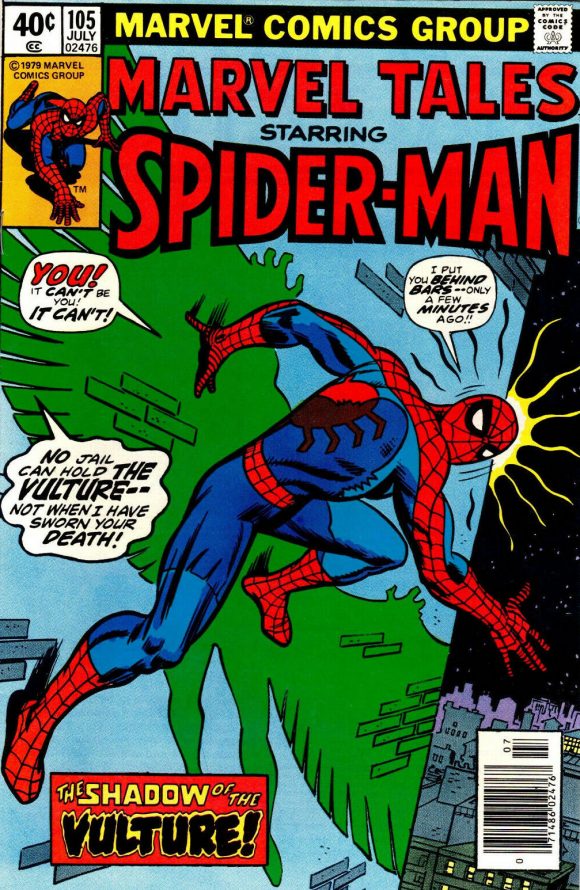