Scott and Dan — along with guest Karl Heitmueller Jr. — hit up the comics racks from 51 years ago!

This week for RETRO HOT PICKS, Scott Tipton and I are joined by Back Issue cartoonist and artist Karl Heitmueller Jr. — he of the hilarious What If 13 Superheroes Wore BEN COOPER Costumes Instead? — in selecting comics that came out the week of Feb. 24, 1970 — which is in large measure the birth of the Bronze Age.

(Keep in mind that comics came out on multiple days back then — as has become the case now. So these are technically the comics that went on sale between Feb. 21 and Feb. 27.)

So let’s set the scene: Richard Nixon was in the middle of his first term as president. Barbra Streisand’s Funny Girl was the No. 1 flick but a big-time personal favorite was also a huge hit at the time — Butch Cassidy and the Sundance Kid, which had actually come out in 1969. (Funny Girl had been out since 1968(!). This is the way movies worked back then. Films would move up and down the charts based on release patterns and they could remain lucrative over long periods of time in theaters. No home video, y’know?) 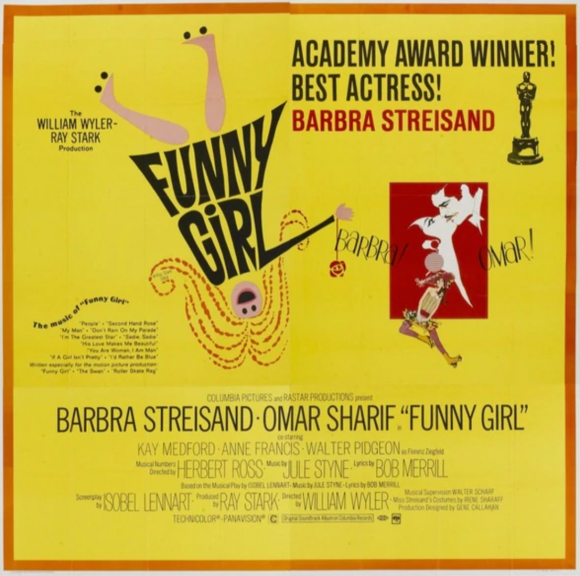 Nielsens for this specific week aren’t readily available but here are some of the TV season’s top hits: Rowan & Martin’s Laugh-In, Gunsmoke, Bonanza, Mayberry R.F.D. and Family Affair. Simon & Garfunkel’s epochal Bridge Over Troubled Water was the top single on the Billboard 100 and the best-selling album was Led Zeppelin II, one of the greatest albums of all time. And for a little more perspective, the No. 2 album was the Beatles’ Abbey Road, a former chart-topper that happens to be the greatest rock band’s greatest album. Actually, the Top 10 albums were pretty freakin’ amazing overall, so click here to check them out. 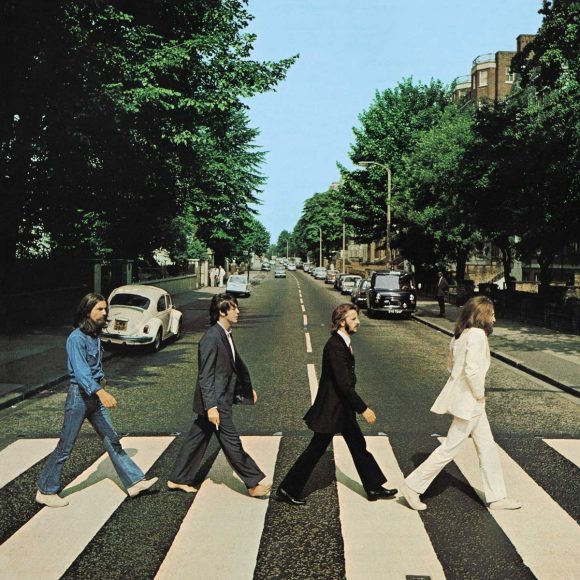 Sock it to me!

(Note from Dan: Karl opted to do his picks as a column. That’s cool. Breaking format is as much fun as having a format to begin with.)

One day in February of 1970, my father handed me something he’d picked up at the newsstand on the way home from work. He knew that I was a big fan of Superman (primarily from the Filmation cartoons that were at the time in reruns on CBS Saturday mornings), so he thought I might enjoy a comic book starring said character. Technically, it was the younger version of the hero, as the book was Superboy #164, cover-dated April 1970. My poor Dad, with this simple 15-cent impulse buy, had no idea of the Pandora’s Box he’d just opened for his 5-year-old son. I became instantly smitten with the medium of comic books, and later that week, my mother took me to the Thrift Drug a few miles down the road from our suburban cul-de-sac and directed me to the comic-book spinner rack near the front of the store, allowing me to pick out a couple more samples of this new interest of mine. 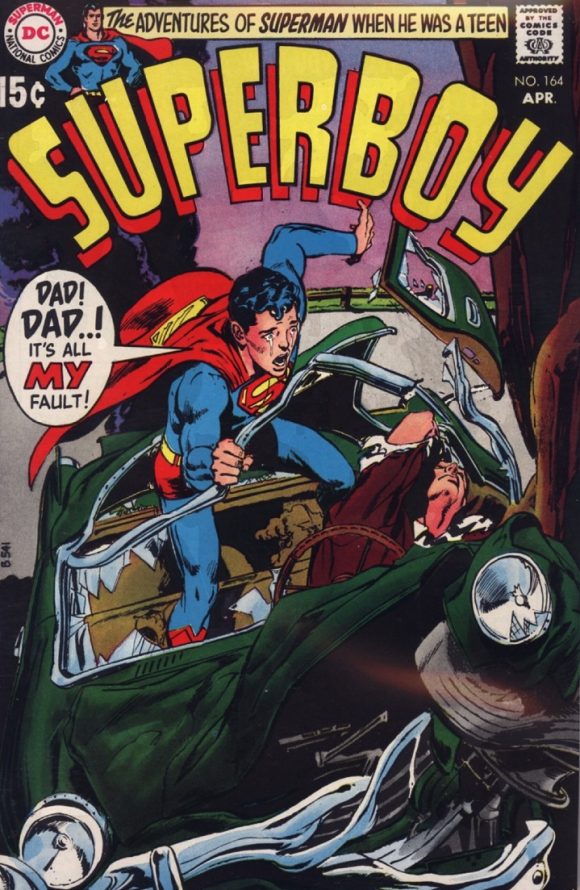 Anyone reading this is at least familiar with what an old spinner rack looked like — four vertical rows of up to 10 wire baskets that held about a dozen or so books each. The rack rotated (hence the “spinner” part of its name) so that it could be placed in a corner or near a wall and still allow for complete mining of the full field of pulp. Now, if you’re too young to have ever had the experience of foraging a comic-book spinner rack, let me try to paint a picture.

I can remember the rush I felt every time I entered a drug store or a newsstand and saw a freshly stocked comic rack. The overwhelming palette of color and bold imagery was an adrenaline jolt like few things I’ve felt since. I’d rush to the fixture and begin the scavenging, carefully flipping the tops of the books in each basket (most of which housed more than one title, which is why comic book mastheads contained as much information as possible, something that can look redundant from a design perspective in the 21st century but was necessary in context), picking the new issue of books I bought regularly and always trying out a new title if the cover grabbed me. 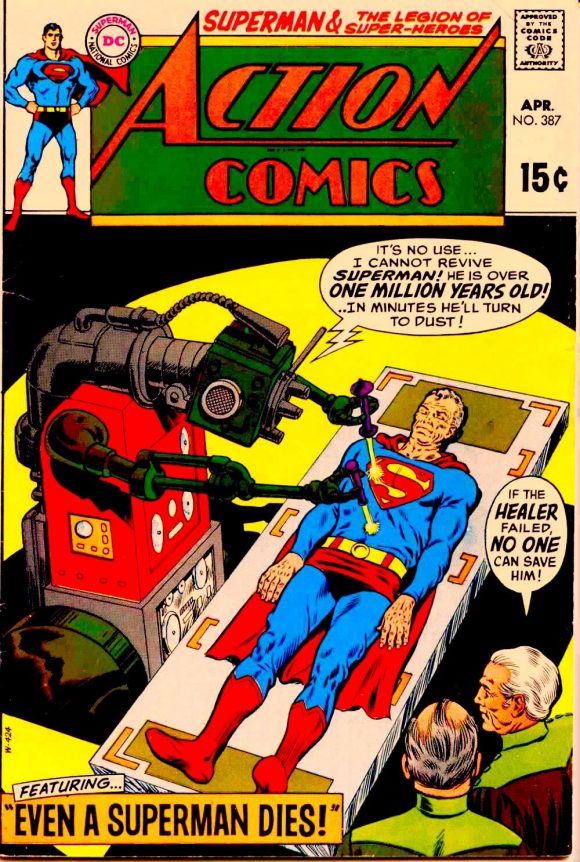 I can still hear the squeak of the rack as I turned it to peruse the next row, squatting as I got to the lower baskets, standing up when I finished the vertical drop. I still remember the thrill of finding something I wanted hidden behind some issues I didn’t (romance comics, yuck!). I can recall the pile of comics growing in my sweaty little paws, the dimes, nickels, and quarters adding up with each selection (DC Comics mostly, but I bought from almost every publisher in the ‘70s), hoping that Mom or Dad was feeling extra generous that day and wouldn’t make me put some of them back (they rarely did).

The only bad thing about the spinner rack was when you had to share it with another comic book fan. (Hey, don’t spin it, I’m not done with this row yet!) Or when you could tell that the stock boy whose job it was to put out the new books didn’t care whether or not they got beat up in the process. But I can honestly say that of all the ways I’ve purchased comic books in the half-century (ouch) since that first issue — comic shops, subscriptions, conventions, used book stores, online — nothing was ever better than hitting the drugstore spinner rack. 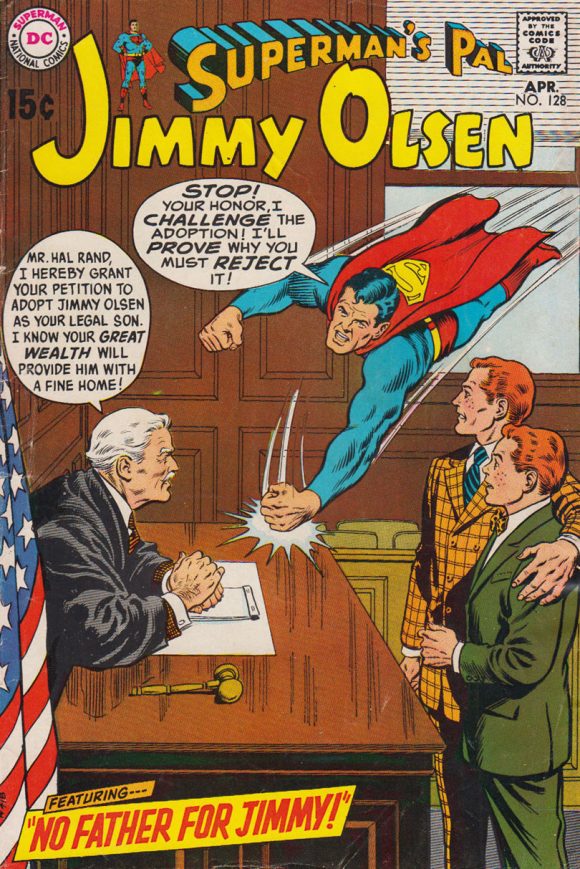 Anyway, back to that February day 51 years ago… Here are the books I picked out that day (and forgive my near-single-mindedness): Action Comics #387, Superman’s Pal Jimmy Olsen #128, Detective Comics #398 and Superman #225 (which had been out for a couple weeks). Every one of these books (along with Superboy #164) holds a place of distinction in my collection; they are not filed away in the comic boxes with their alphabetical/chronological brethren, they are on open display on a shelf in my studio, and the covers of each one resonate with me like pictures of any first loves. 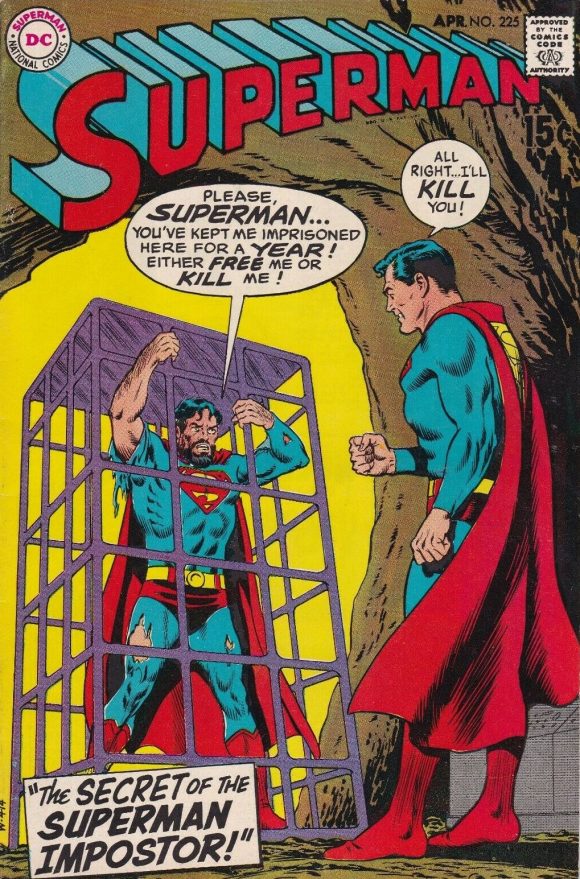 What I didn’t come to understand until many years later was the significance the timing of my entry into comic-book fandom held: Also on the spinner rack that week was Green Lantern #76, widely considered to mark the very dawn of the Bronze Age of Comics. So I started buying/reading/collecting comics the precise moment that my favorite era of the medium began. Looking at the gallery of all the comic books that came out that month (many more of which I’ve since added to my collection), I am again reminded that while I may often feel the sting of middle age, I wouldn’t trade the experience of buying these books at this time in this manner for anything. I am a true Bronze Age Baby and I wouldn’t have it any other way.

Detective Comics #398, DC. It’s funny the things that fascinate you as a young comics fan – anytime I would ever see this weird Detective Comics logo with Robin incorporated, I always jumped to pick it up. 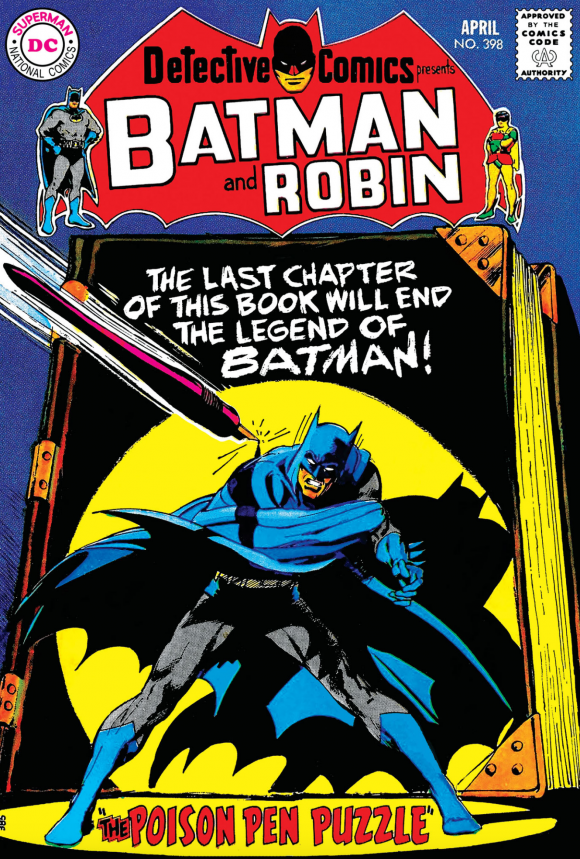 Dan adds: Scott’s right — I LOVE that logo. Same with the one that featured Batgirl instead.

Walt Disney Super Goof #13, Gold Key. One of the biggest nostalgia thrills of my life was unexpectedly meeting Super Goof at Disneyland on Halloween a few years back. ‘Nuff said. 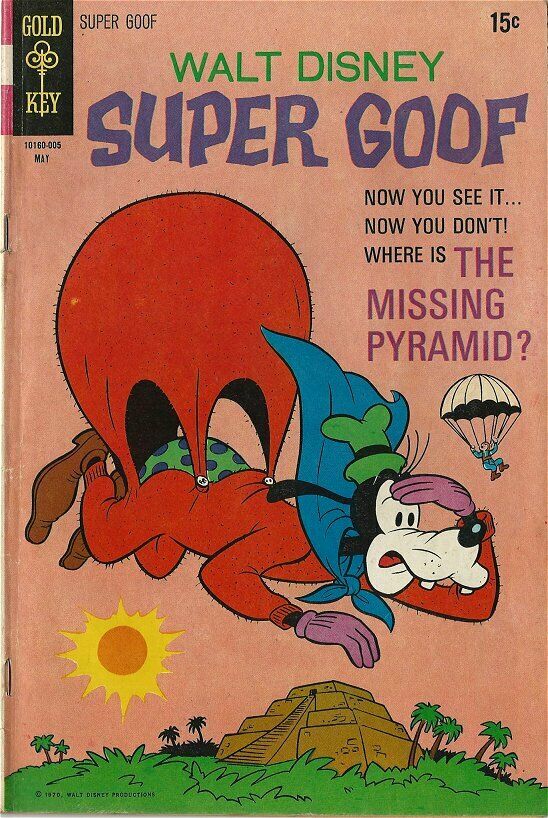 Green Lantern #76, DC. The book that launched the Bronze Age and one of a handful that truly defined the era. A half-century later, it reads a bit heavy-handed but Denny O’Neil and Neal Adams’ bold hearts were absolutely in the right place. As much as I love O’Neil and Adams’ extraordinary work on Batman — they’re my favorite overall creative team — their Green Lantern/Green Arrow run will always symbolize their prodigious partnership. Either way, both would always be at their best when paired with the other. 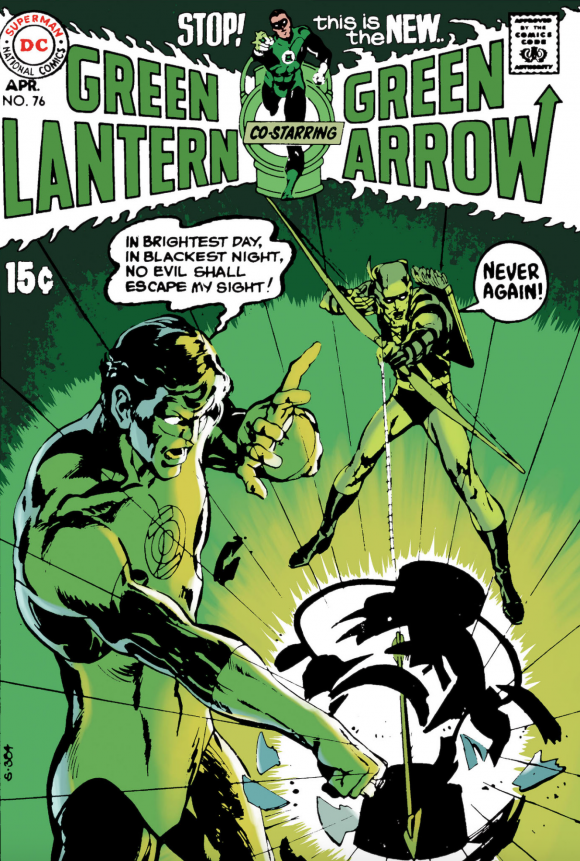 Scott adds: A legendary issue by O’Neil and Adams, one that permanently redefined the Hal Jordan and Oliver Queen characters, particularly Ollie, who for the first time ever was actually interesting. 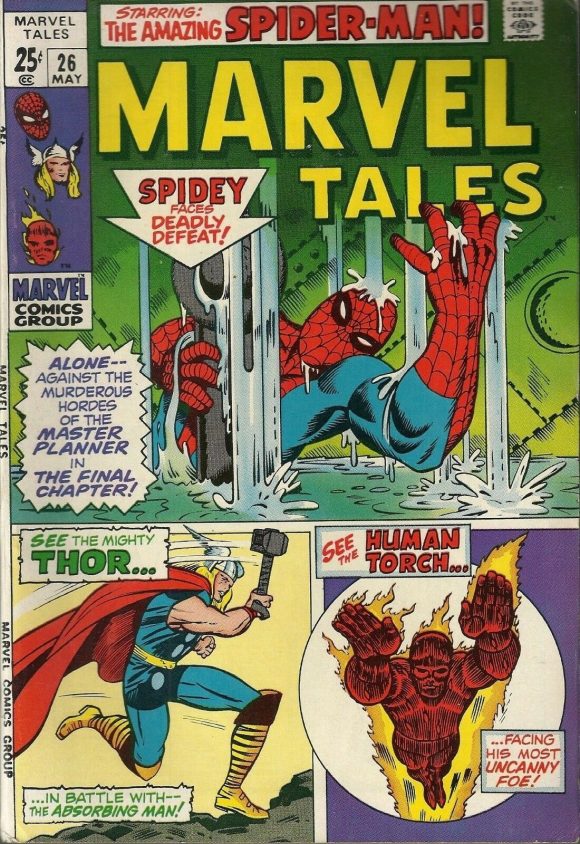 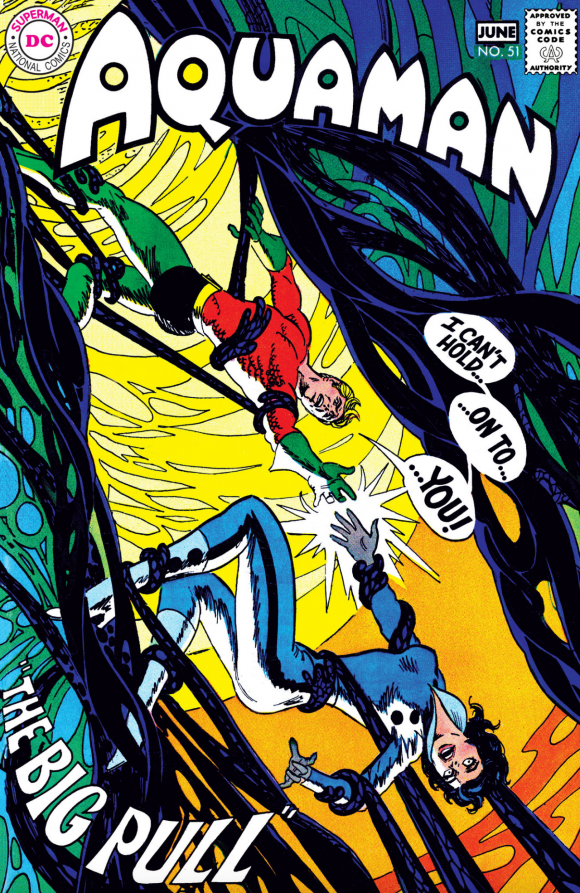 The Brave and the Bold #89, DC. I have this issue, I’ve read this issue and if I’d visited the spinner rack that week (I was only 3), I would have bought it then. I don’t remember the story at all but look forward to it when I begin my B&B re-read, whenever that is. Great Adams cover, with a story by Bob Haney, Ross Andru and Mike Esposito. And hey, Robin shows up! 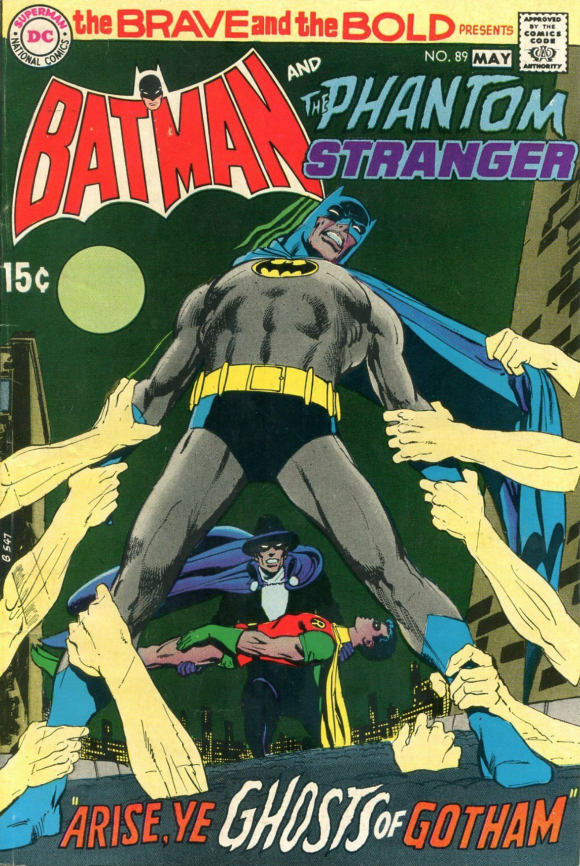