Scott and Dan — along with special guest Joe Jusko — hit up the comics racks from 51 years ago!

This week for RETRO HOT PICKS, Scott Tipton and I are joined by big-time fantasy and comics painter Joe Jusko, known for his Marvel Masterpieces cards, Savage Sword of Conan covers, ever-popular Marvel corner box recreations and so, so much more. 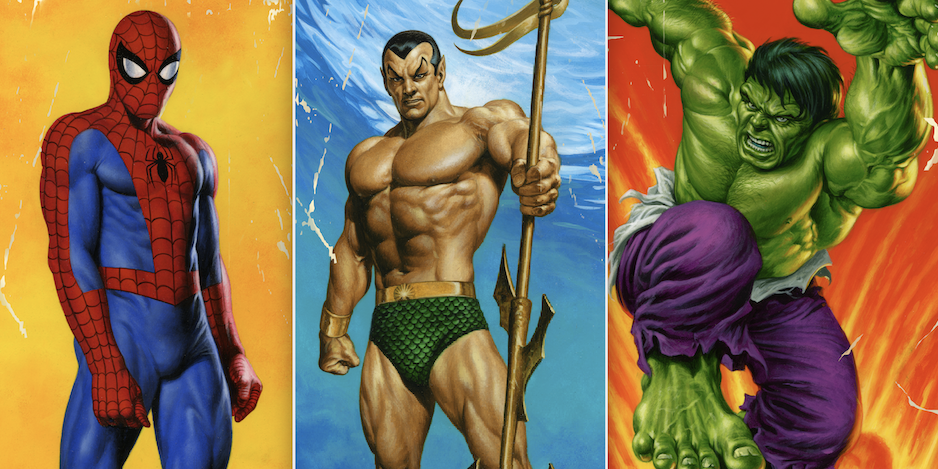 (Keep in mind that comics came out on multiple days back then — as has become the case now. So these are technically the comics that went on sale between Oct. 11 and Oct. 17.)

So let’s set the scene: Richard Nixon was in his first term as president. Gunsmoke — which debuted on TV in 1955 — was still a big hit. Speaking of Westerns, the musical Paint Your Wagon, starring Lee Marvin, Clint Eastwood (both of whom sing!) and Jean Seberg (whose singing was dubbed), was in theaters. The Temptations’ killer I Can’t Get Next to You topped the Billboard 100 while Creedence Clearwater Revival’s Green River was the top-selling album.

Amazing Spider-Man #80, Marvel. I was a HUGE Spider-Man (and John Romita) fan, but Big John Buscema was my idol. Still is. I was thrilled with the intermittent Spidey issues he drew, starting with #72. You had to really know Buscema’s layouts and figure work to recognize it under Jim Mooney’s inks, who was obviously tasked with keeping a uniform look to the book so that Romita’s absence was barely noticeable. Amazing Spider-Man 1-100 is probably my favorite comic run ever. 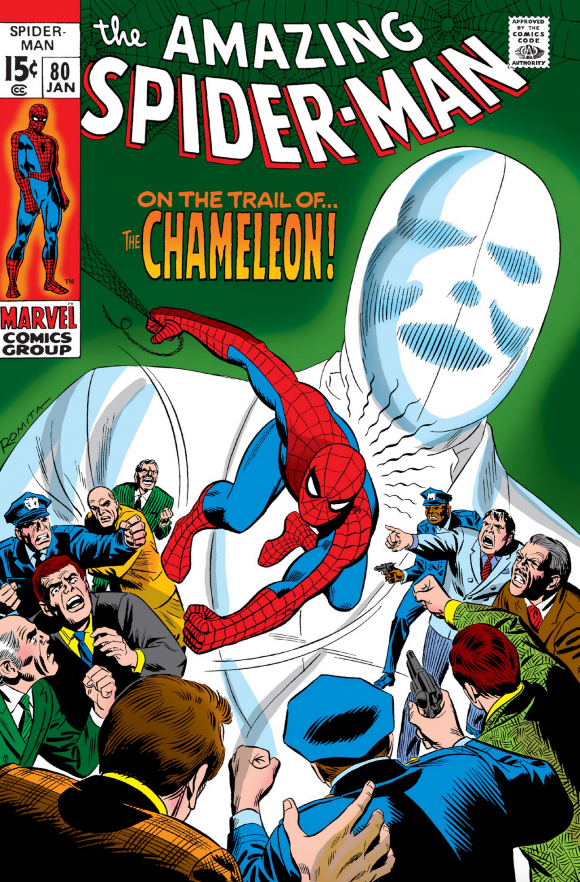 Dan adds: You cannot go wrong with Spider-Man in this period. You just can’t.

The Avengers #71, Marvel. As a 10-year-old, a cover like this was all that was needed to get me to buy a book (though I was already collecting every Marvel comic in existence). No John Buscema? Hey, look! It’s John’s little brother, Sal, who looked enough like John at this point in his long and storied career to fool all but the most discerning eye. This entire era is what inspired me to pursue comics as a career, and rereading these books brings back the same sense of wonder I felt back then. 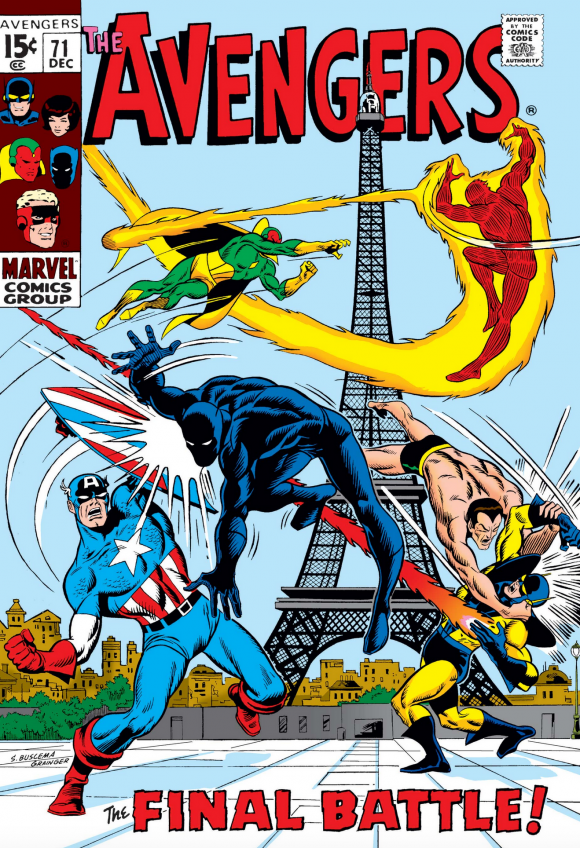 Scott adds: Avengers vs. Invaders! Roy Thomas can never resist returning to World War II. Plus, the Black Knight joins the Avengers, but not the one you’re thinking of. It’s a long story.

Green Lantern #73, DC. You never confused Marvel and DC books in 1969. I think DC’s covers during this period were more artistically designed than Marvel’s, which took a more action-oriented approach. Gil Kane was a master draftsman who today I recognize as an absolute genius, though back then his overtly anatomical style was a bit off-putting for my adolescent sensibilities. That said, I snatched this off the stand the minute I saw it. 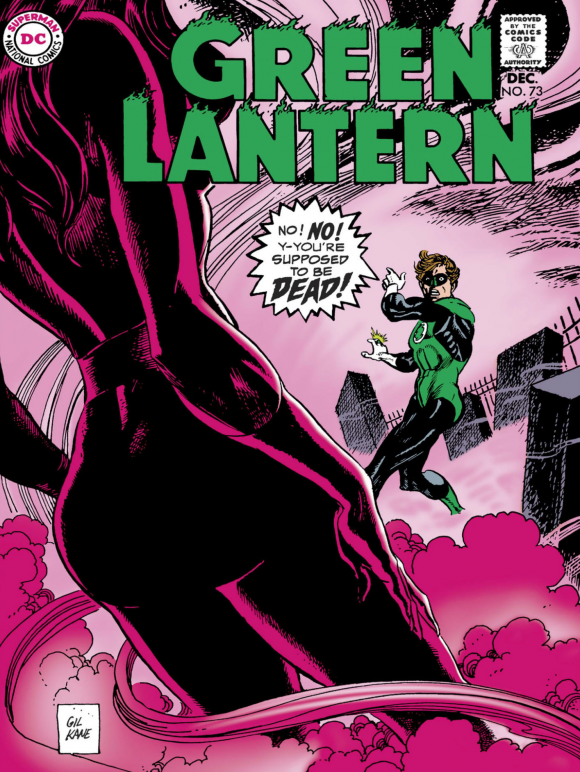 Dan adds: This is kind of a forgotten period in GL’s publication history. Hal Jordan’s original heyday was past and O’Neil and Adams’ radical run was still to come. Still some neat stuff in there, though.

Casper’s Ghostland #52, Harvey. I loved Casper and bought almost all the Harvey books, though they were more disposable to me than the other books I collected. One of the things I took note of was how well drawn the backgrounds and settings were. The detail in the haunted shacks and houses was intriguing and the stories were just fun. Where are these kinds of books today? 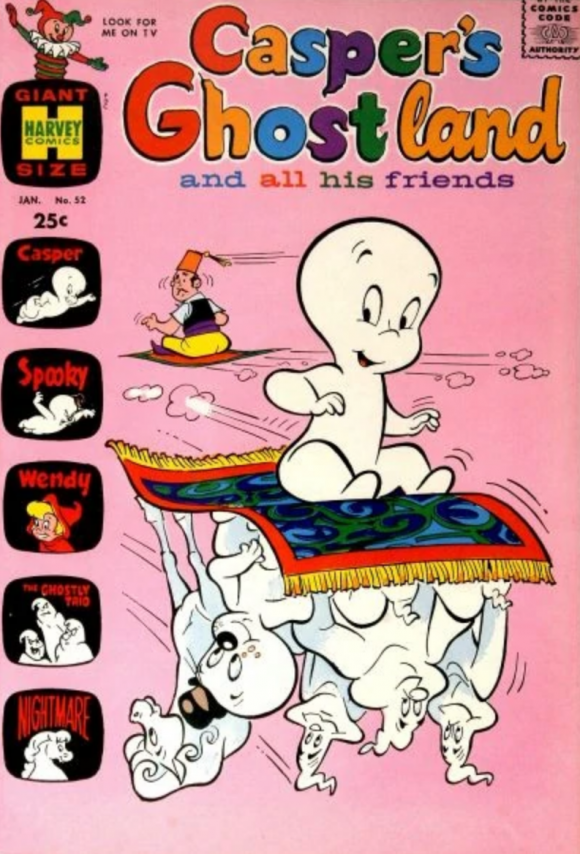 Turok, Son of Stone #68, Gold Key. Turok is the first comic I ever remember my older brother Danny buying. It had everything a kid would want to see: cavemen, two lost and out-of-time Native Americans, and dinosaurs. A monthly comic about DINOSAURS! The concept was pretty ingenious, but in hindsight, I’m actually amazed that the book lasted as long as it did because the stories became incredibly repetitive. The saving grace was the incredible work by an artist I identified decades later as the prolific Alberto Giolitti, who drew seemingly countless stories for Dell and Gold Key comics. His style was lush and detailed and realistic in a way that made any subject he drew believable. Over the years I’ve sought out as much of his work as I can find and next to John Buscema he is my biggest comic influence. The George Wilson painted covers are still astounding, especially considering how many he was churning out every month for a multitude of books. 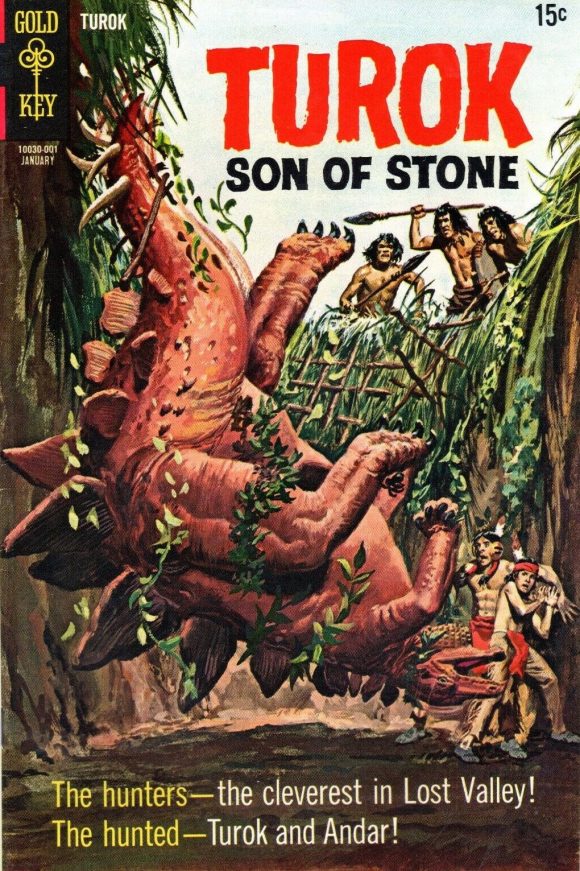 The Witching Hour #6, DC. I always found the DC genre books (Westerns, mystery, war) so much more enjoyable than their superhero titles (and their Marvel counterparts), though I honestly can only remember a few specific stories. This cover by Nick Cardy, as with so many others by Neal Adams, Bernie Wrightson, Jeff Jones, etc., looked more like a paperback cover than a comic and is a lesson unto itself in composition and storytelling in a single image. Just great stuff that stacks up with anything done since. Instant grab off the rack for me! 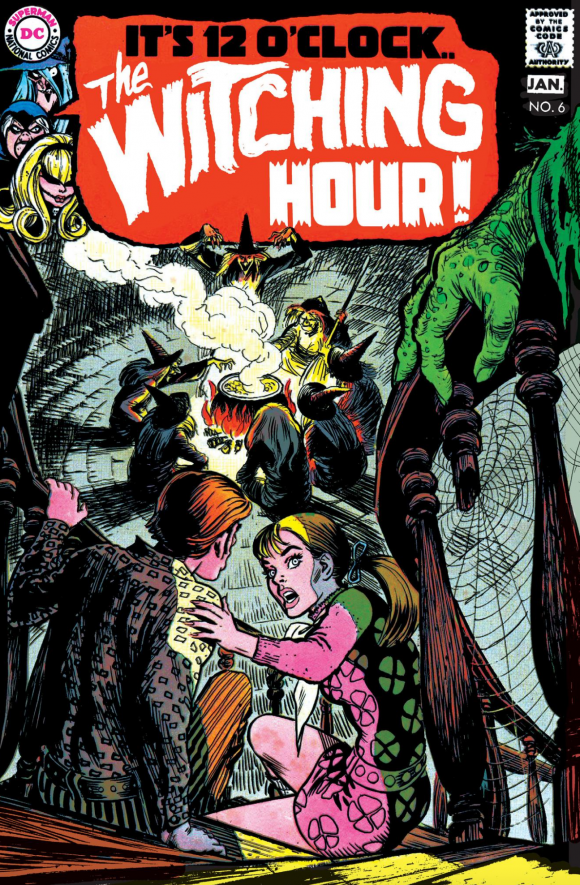 Fantastic Four #94, Marvel. Crazy to realize that by this time Stan and Jack had been cranking out FF at a monthly pace for close to a decade. What an amazing run. Anyway, here we have yet another attack by the Frightful Four, while newborn Franklin Richards gets a name and we meet his witchy nanny Agatha Harkness. 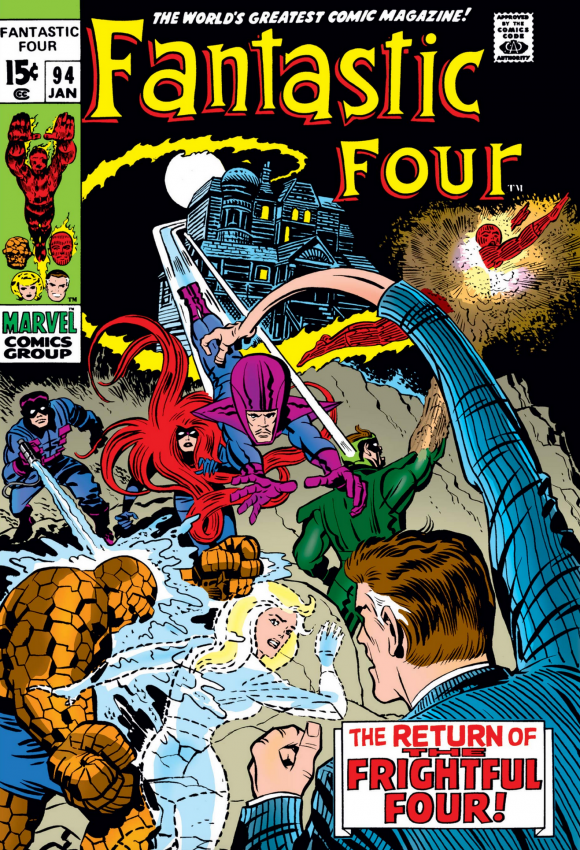 X-Men #63, Marvel. This period of X-Men history so often gets lost in the shuffle. In between what people think of as Silver Age X-Men and the “All-New, All-Different X-Men” of Wein, Claremont, Cockrum and Byrne, was this brief run by Roy Thomas and Neal Adams, which featured some of the most vital and visually exciting comics of their day. Long-running X-Men concepts like the Savage Land and Havok and Polaris really got their start in these pages. 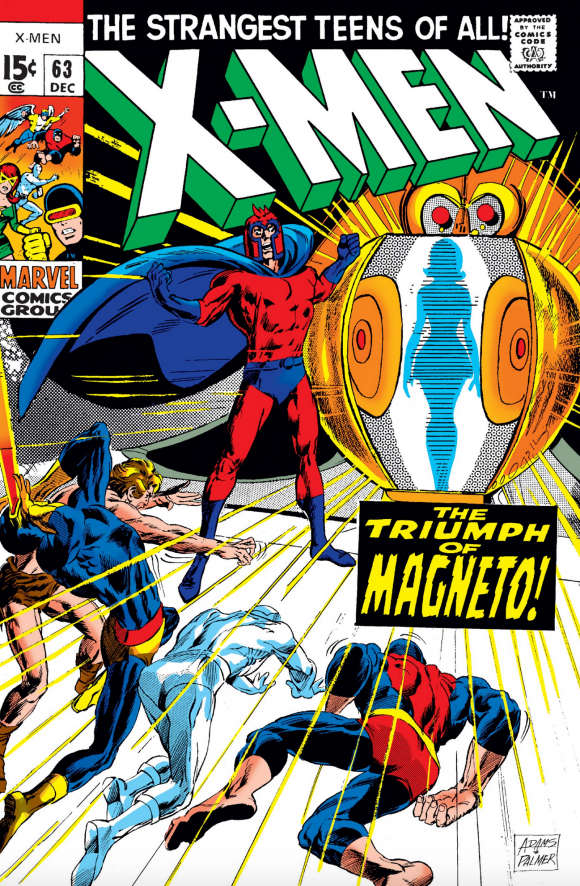 Superman’s Pal Jimmy Olsen #125, DC. A typically outlandish Jimmy Olsen cover made even more so when you take a second and realize that Superman could swat him away to the Moon if he were so inclined. As I’ve said before, I just like the idea of a world where Jimmy Olsen could run for 125 issues (and then some). 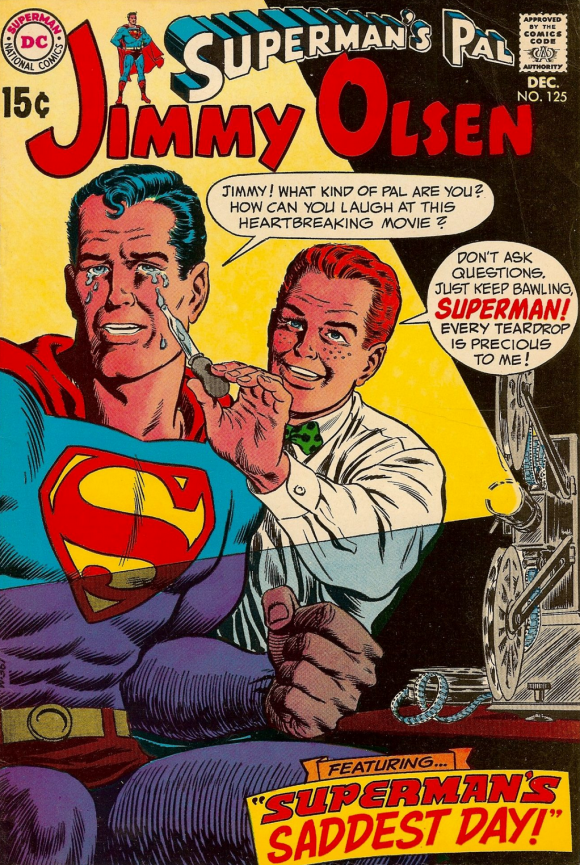 Metal Men #41, DC. Y’know how people complain about how comics aren’t fun anymore? That they’re too dark? They should check out Metal Men circa 1969, when DC gave the goofy robots unnecessary human guises, depressed the series’ sunny tone and turned Doc Magnus into a murderous, power-mad villain. Fans didn’t buy it and the series was cancelled mid-story with this ish. It would take a number of years for DC to right things with everyone’s fave android team. 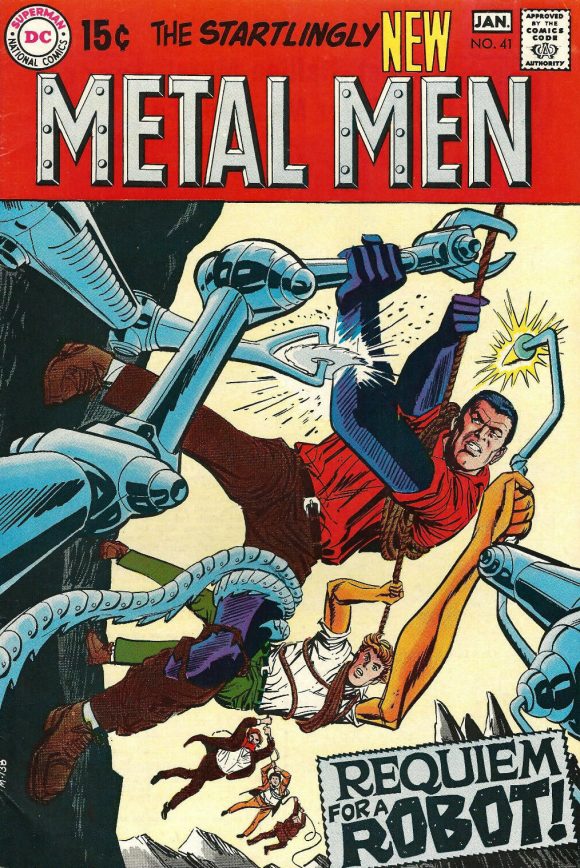