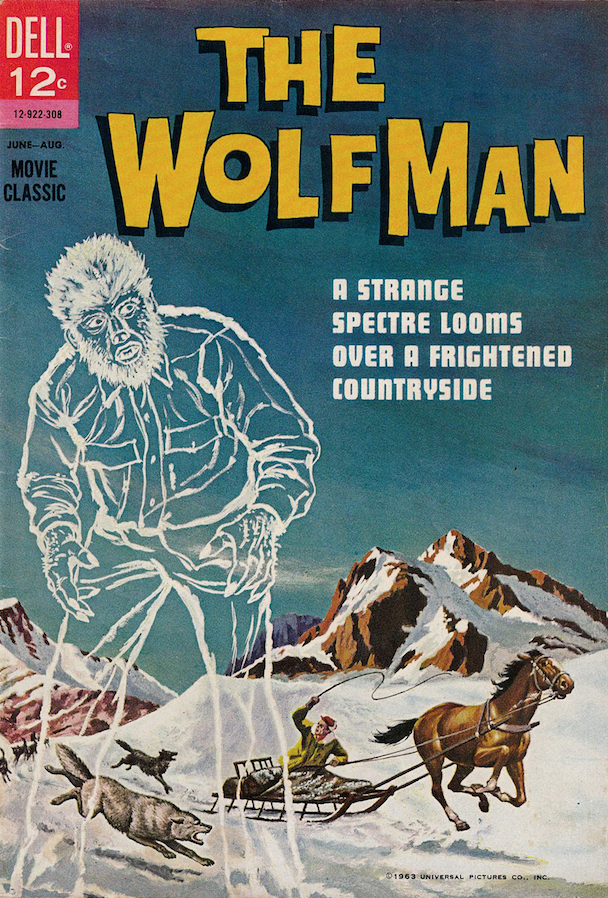 Published in 1963, The Wolf Man, written by Robert Bernstein and drawn by Bob Jenney, signals to its readers right from the cover this will not be an adaptation of the classic 1941 film starring Lon Chaney Jr. A ghostly wolf man figure looming over a snowy mountain? Huh? Well, here’s my 12 cents anyway, Mr. Newsdealer…

Anyway, this Wolf Man story opens in 1867, at the graduation ceremony of a Parisian medical school. Two of its top students, Milo Zak and Albert La Forge, are receiving their diplomas. Milo is a top-flight chemist, and Albert is already a superb surgeon. Albert plans to set up a practice in Paris, but Milo is determined to return to the small village where he was brought up. Kavlec is a town completely ruled by superstition, and where no one is familiar with medicine or science. In fact, most of the townspeople believe that wolf men live in the nearby mountains, and are responsible for a series of grisly deaths. Albert hopes to turn these backward people around by introducing them to “the ways of science.”

But it’s not all altruism that is driving Milo. Waiting for him in Kavlec is his childhood sweetheart Lyana, whom he plans to marry once he is set up. She is thrilled to see Milo again, and has to explain to him why, after a few weeks, he has no patients. Basically, the townspeople are still afraid of letting go their beliefs, preferring to visit an old crone named Galina who claims to have mysterious powers and magical potions. 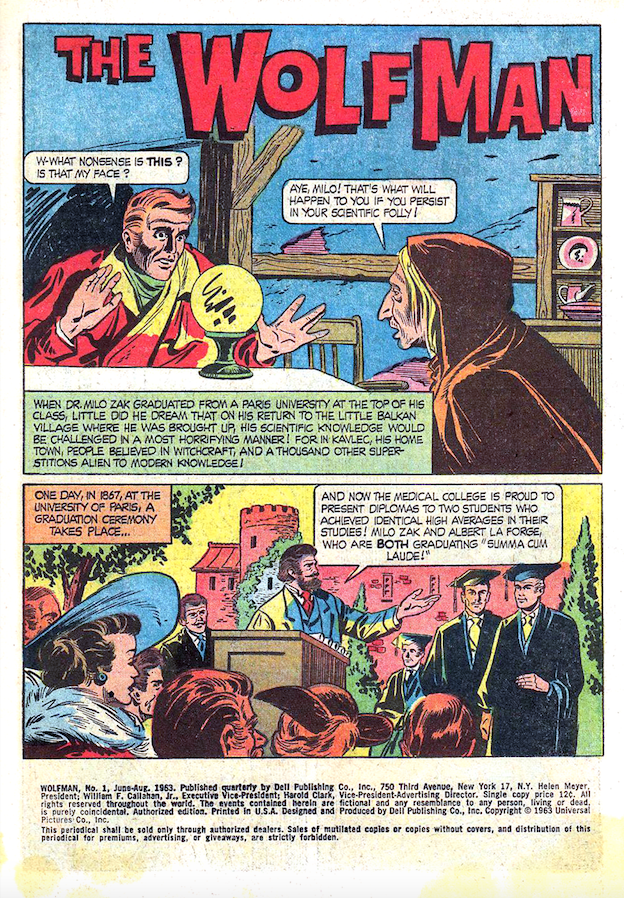 Meanwhile, outside the village, we are introduced to a strange-looking man named Vorcla, who offers “protection” to the local farmers from the roaming packs of wolves. When Milo gets wind of this, he demands the local police chief arrest Vorcla. The man demurs, revealing that he believes Vorcla’s story. This enrages Milo and he demands that Vorcla be put on trial. The townspeople are nervous over this, and a local fortuneteller shows Milo a crystal ball that supposedly reveals what will happen if he continues his case against Vorcla. Galina the witch does the same thing, and while it unnerves Milo a bit, he continues with his mission to expose Vorcla. 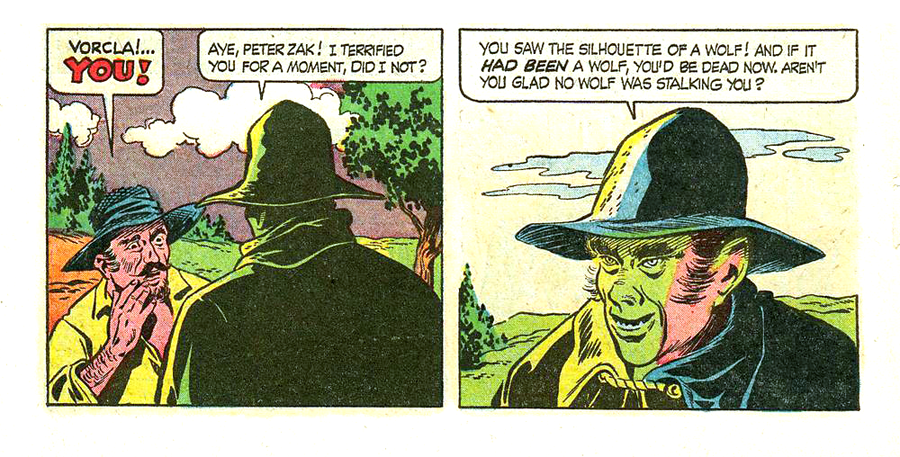 Hey, isn’t this story called The Wolf Man? Get to the wolves already!

Vorcla is revealed to be the fraud he is, and surprisingly the townspeople banish him. But he wastes no time exacting his revenge on the town, specifically Milo’s family. He murders Milo’s adopted father, sicks a pack of wolves on a farmer, and burns his house down. Word of this spreads through the town, and it doesn’t take long before they turn on Milo, furious at him for incurring Vorcla’s wrath. That night, Vorcla sneaks into Milo’s home as he sleeps, and talks about exacting a different kind of revenge …

A few weeks later, Milo’s friend Albert receives a letter asking him to come to Kavlec. He thinks it’s from his old friend, but when he arrives he learns it was from Lyana, who faked Milo’s handwriting. Apparently Milo wanders in and out of trances, muttering about being attacked by wolves in the dead of night. Albert is shocked to hear his friend talk like this, and insists on getting to the bottom of all this.

During an examination, he finds a bite mark on Milo’s neck, which Milo dismisses as a shaving cut. When told to look at it in the mirror, Milo lashes out and smashes the mirror to the floor. Lyana believes that means Milo is a werewolf! Albert thinks is this crazy, but is shocked to discover that, after fooling Milo into a room with a giant mirror, his friend casts no reflection! Milo is horrified and reveals his secret. 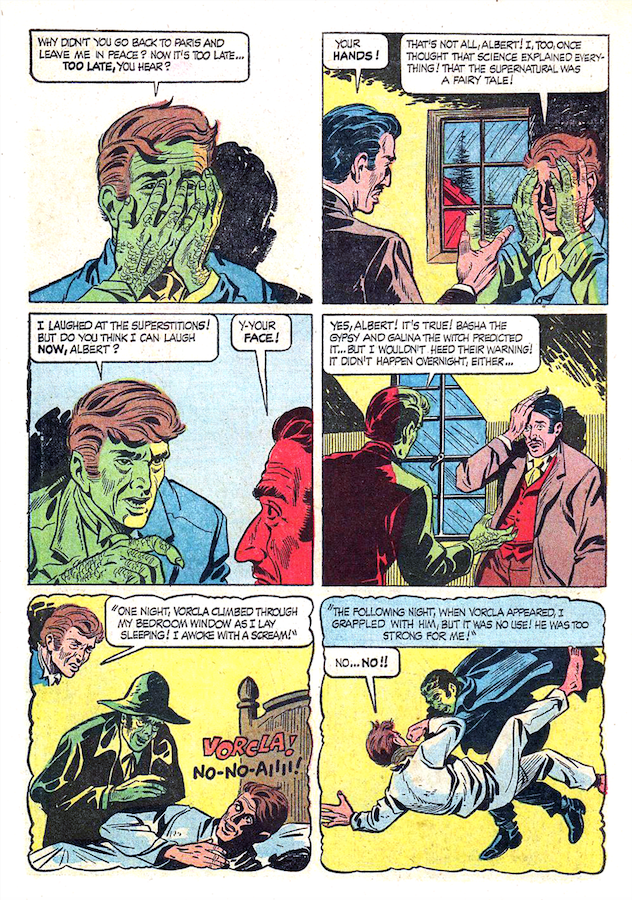 Milo then tries to kill Albert, distracted from the task when Lyana falls to the floor, unconscious. Milo tells the townspeople he’s taking her to his office, but he really means Vorcla’s cave in the snowy forest. Galina finds Albert and, wolfsbane in hand, tracks them down. The “magical” plant scares off the wolves, and Albert uses a walking staff to spear Vorcla in the back. Albert picks up an unconscious Milo, and brings him back to town. He tells Lyana that her fiancée will be fine, and that the story of Vorcla was “only a legend.” The End!

If The Wolf Man sounds a bit like the Dracula “adaptation” from a year earlier (click here), that’s because it is. It features two friends who investigate the supernatural folklore of a remote village, and how one of them is eventually subsumed by it. But while Dell’s Dracula did feature bits and pieces from the movie on which it was ostensibly based, The Wolf Man features no trace elements of the Universal film, other than the vague resemblance to Larry Talbot seen on the cover (which is baffling, since there is no character like this seen in the comic). 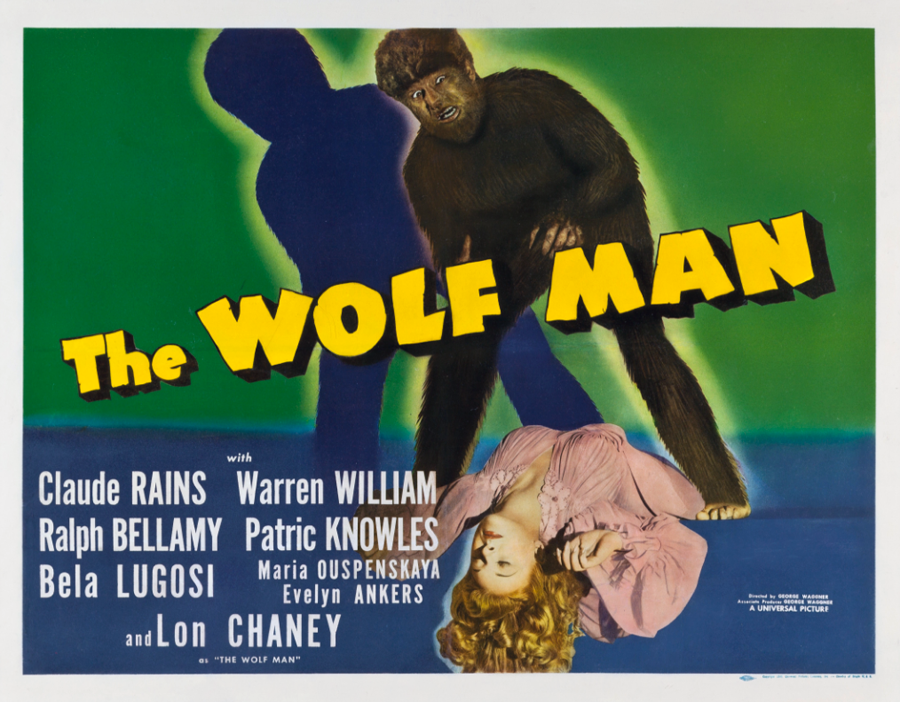 As is typical of these Dell adaptations, Bob Jenney’s work is thoroughly unmysterious and does nothing to suggest any sort of horror-esque mood. Even in the sequence where Albert seems to start transforming into a wolf man, the colorist chose to use green to suggest the change, making him look more like a lizard man. Vorcla is a weird-looking dude for sure, but he’s not very scary. The 1941 Wolf Man movie, which was 20 years old at this point and a stable of kiddie matinees, had more thrills and chills. What was Dell so afraid of?

Even the cover, by far the best thing about this set of monster comics, is pretty unremarkable. I couldn’t find any credits for it, but since Vic Prezio did the others in the series, chances are this is his work too. We all have our off days.

Rob Kelly is a writer/artist/comics and film historian. He is the co-host of The Fire and Water Podcast (and the host of its sister show, The Film and Water Podcast), the co-creator and writer of the award-winning webcomic Ace Kilroy, and the creator of the book Hey Kids, Comics!: True-Life Tales From the Spinner Rack. He is pure in heart and says his prayers by night.