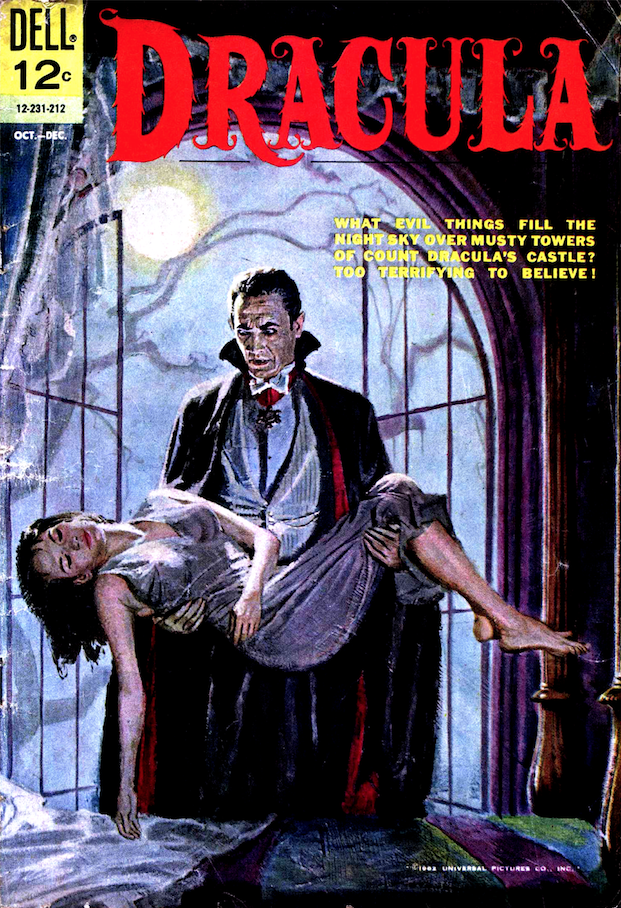 Published in 1962, The Vampire’s Curse, supposedly by Bernhardt J. Hurwood and artists Max Elkan, Bob Jenney and Joe Certa (I say “supposedly” because there are no credits to be found here, and databases vary as to who actually worked on the book), opens up on a rain-slicked road, late at night. A car arrives at the home of Professor Janos Tesla, and inside is Professor Basil Shawcross. The two are old friends, and Tesla wonders why Basil has visited so suddenly, and so late at night.

Shawcross asks Tesla to tell him what he knows about vampire folklore, an area Tesla is an expert in. Tesla relays the gory details—the drinking of blood, the transforming into bats—but Shawcross finds it all too unbelievable. Tesla hands him a book titled “The Documented History of Vampirism,” which features “Factual, documented evidence of the most celebrated cases on record.”

Shawcross is still dubious, but finally admits why he’s here in the first place—his son, Bruce, last seen in Transylvania, has been reported dead. As if that isn’t bad enough, Shawcross cannot get any information as to what happened but, thanks to letters Bruce sent home, he has an idea something nefarious is afoot. 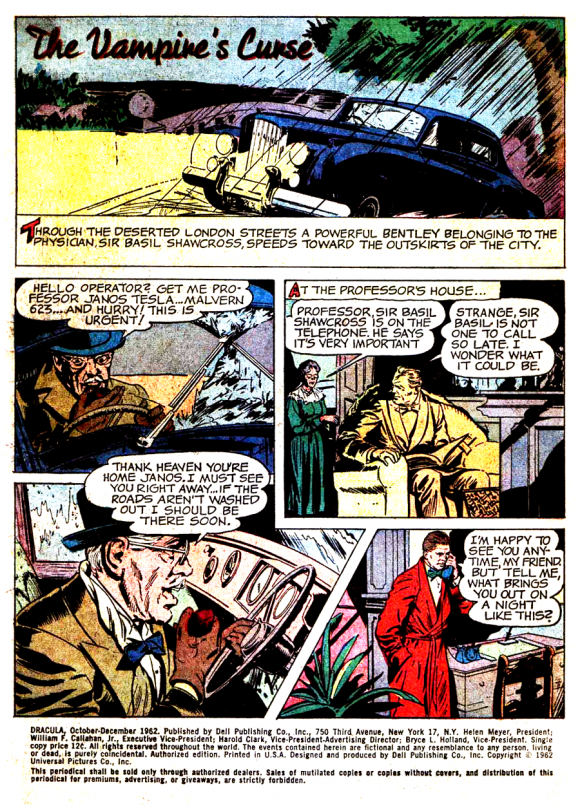 It turns out that Bruce went hiking in the Carpathian Mountains, with the idea of finding inspiration for his paintings. Late one night, he met a strange girl at a cemetery (aka Transylvanian Tinder) named Irina, whose exotic beauty transfixed him. Irina disappears, promising they will see each other again, soon.

Bruce became obsessed with Irina, and spent a lot of time painting a portrait of her from memory. She reappeared to Bruce just as mysteriously as she disappeared, but he is so happy to see her he doesn’t even notice she does not cast any reflection in a nearby mirror. Nor does he notice anything strange when she refers to him as “delicious,” chalking it up to her unfamiliarity with the English language. 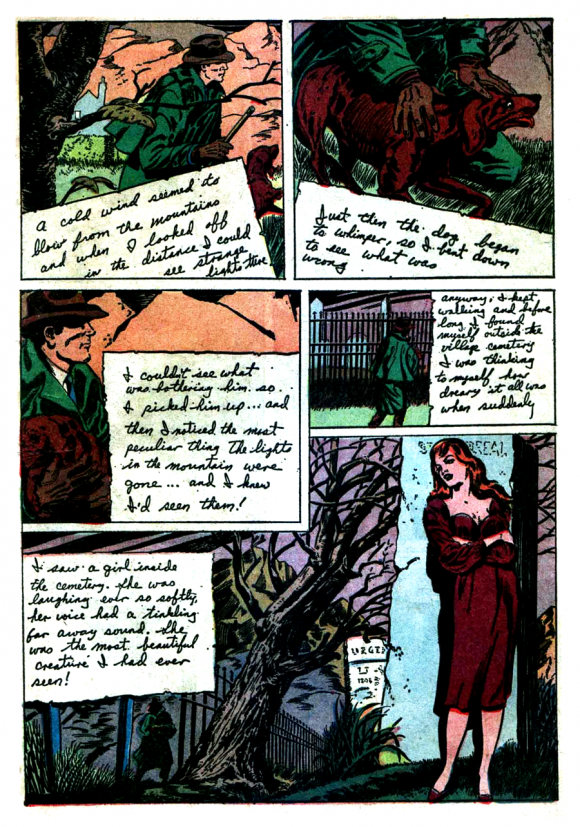 Despite all this, Bruce and Irina got engaged, and that’s when things went south (east, really). Bruce’s letters to his father described unimaginable horrors, which we see in a full page that was about as gory and explicit as Dell Comics ever got. 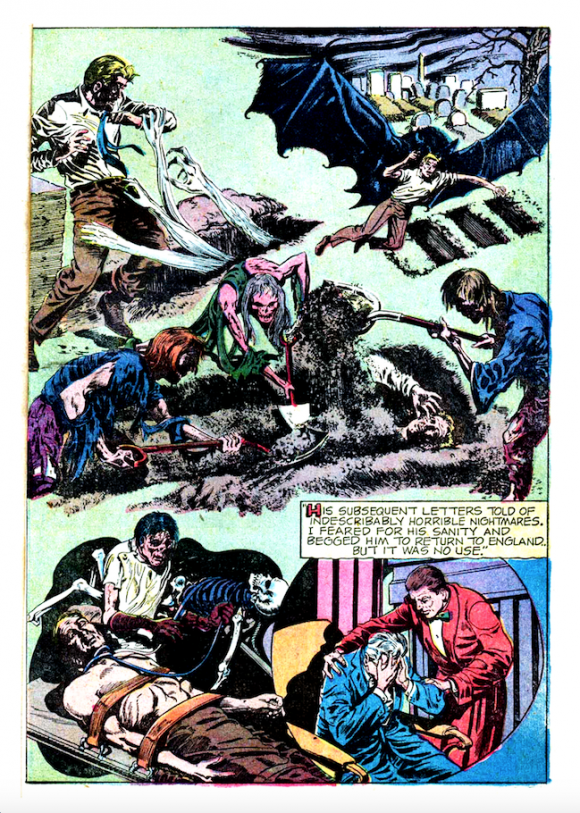 The two professors decide to travel to Transylvania to try and find Bruce—but not before Tesla makes a trip to his greenhouse for some wolfsbane (good luck getting that through the TSA, Janos). Upon arrival, they are warned that this is a dangerous land for foreigners, but Janos and Basil press on. Shawcross is led to the room Bruce stayed in, and finds the ghastly painting of Irina (he also foolishly removes the cloves of garlic dangling outside his window).

In the middle of the night, he is shocked to see his son standing at the foot of his bed! Basil sees how terrible his son looks, but agrees to leave with him, at Bruce’s insistence. He is then introduced to Irina, and they take a carriage to the house of Irina’s uncle, Count Dracula!

With Janos stowing away on the carriage, they arrive in the middle of the night and are met by Count Dracula (finally making an appearance on page 31 of the comic that bears his name), who offers Basil wine. Janos storms in, telling his friend not to touch it. Basil, a man of science until the end, insists that Dracula and his minions are simply suffering from a mysterious malady that makes them think they need blood to survive, and there must be a cure. In response, Dracula attacks Basil with a large, mad dog, which gives the old man a heart attack. Janos manages to fight them all off via the wolfsbane and some garlic powder, and then tends to his dying friend. The story ends at daybreak, with Janos having made it back to the village, where he promises to avenge Shawcross by finding a way to end the curse of vampirism, once and for all! To be continued? 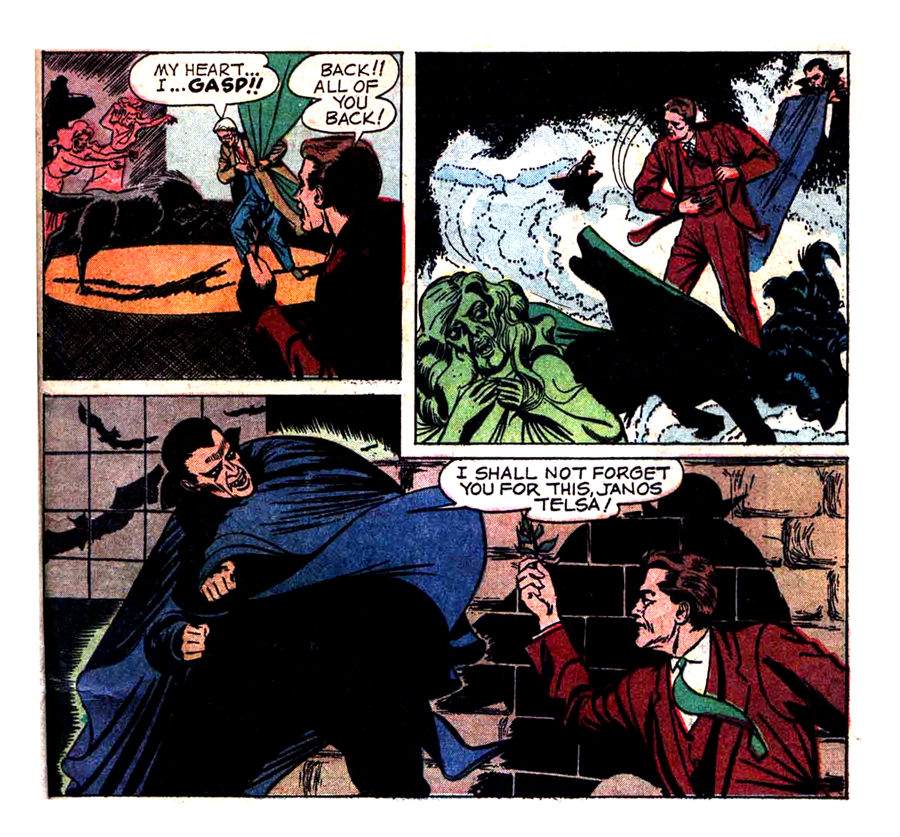 Like its Frankenstein “adaptation,” Dell’s Dracula charts its own merry course, not worrying one whit about reproducing anything that happened in the 1931 classic with Bela Lugosi. There are a few scenes in flashback that hint at events we saw in the Universal film, and there’s the line about Dracula not drinking wine, but that’s about it.

Oddly enough, The Vampire’s Curse seems to borrow mightily from another horror icon, legendary producer Val Lewton. A naïve guy meeting a mysterious girl named Irina who harbors a tragic secret is the set up for Lewton’s 1942 film Cat People, and the scene where Bruce and Irina meet cute in a cemetery is reminiscent of 1943’s The Leopard Man, also produced by Lewton. Since he was crafting an original story and not an adaptation of the film, maybe writer Hurwood figured he could just borrow from all different elements. 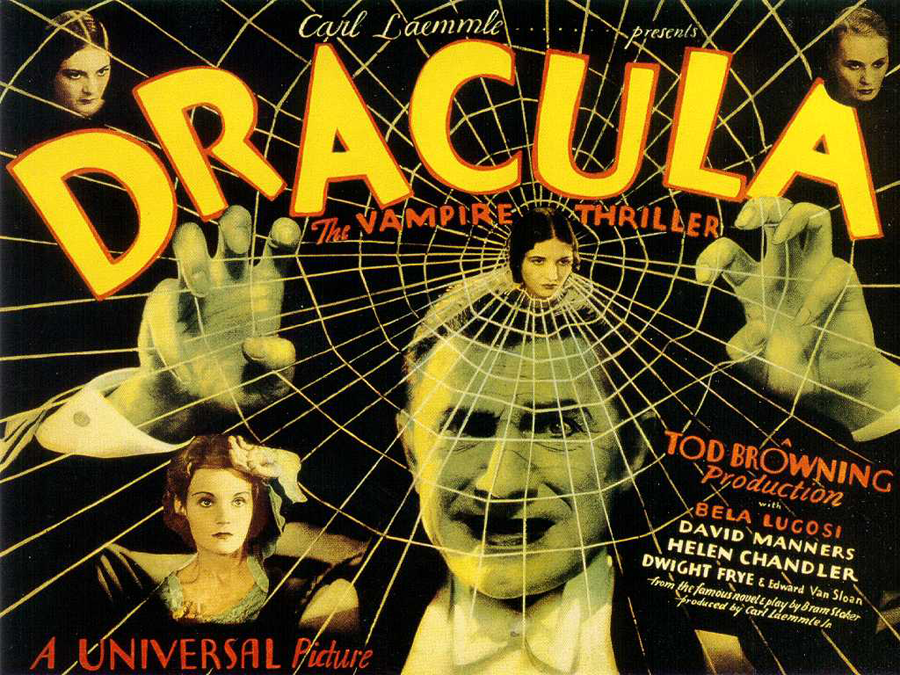 In any case, while The Vampire’s Curse may fail as an adaptation of Dracula, it works pretty well as a horror comic. The hook of retrieving a loved one who has disappeared into the wilds of Transylvania is solid, and as I mentioned above, the book gets about as grisly and moody as you could possibly expect from a Dell comic. The art is still pretty iffy in spots, but it doesn’t suffer from the same candy-colored blandness that would mar their Frankenstein comic. This is a dark story that at least tries to achieve a dark mood, and they must have thought there was a chance at continuing adventures for Professor Tesla, since Dracula gets away, resulting in a very open ending.

Like Frankenstein, the cover (also credited to Vic Prezio) is fantastic, and would have worked great for a paperback reissue of the original Bram Stoker novel. So while 1962-era kids still didn’t get what the cover promised—an adaptation of the movie Dracula—this comic kinda works on its own merits and shows that maybe Dell could pull off horror if it wanted to: Dell Comics are Horror Comics!

Rob Kelly is a writer/artist/comics and film historian. He is the co-host of The Fire and Water Podcast (and the host of its sister show, The Film and Water Podcast), the co-creator and writer of the award-winning webcomic Ace Kilroy, and the creator of the book Hey Kids, Comics!: True-Life Tales From the Spinner Rack. He does not recommend picking up girls at cemeteries.