Amazing Fantasy #1000 is out this week and the celebrated Mr. K pays homage to Spider-Man — eternally young at 60… 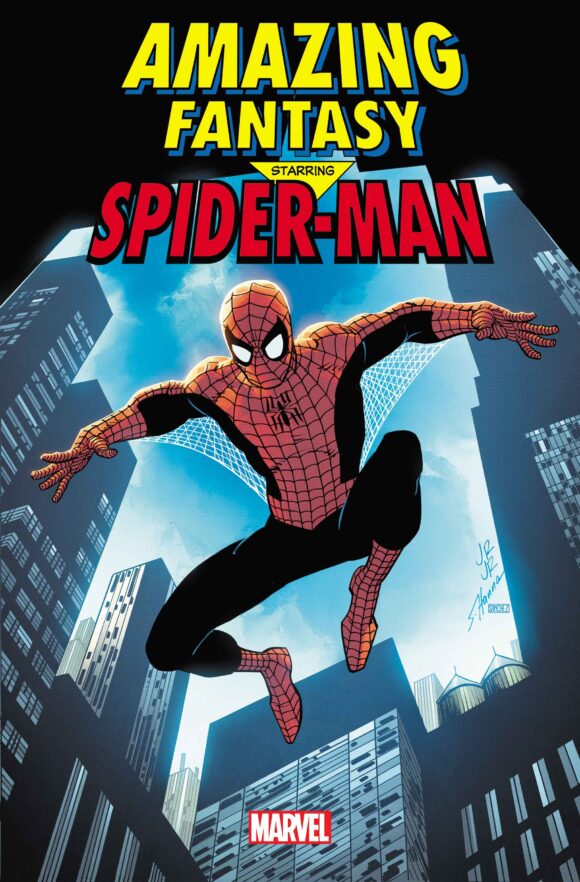 Look out, here comes the Spider-Man… at 60 years old and still looking fabulous!

I was just 10 days shy of my seventh birthday when Spider-Man made his debut in Amazing Fantasy #15 (pub date Aug./Sept. 1962), although he wouldn’t make an imprint on my brain until a couple of years later. Atlas hadn’t yet become Marvel Comics when I started reading comics, so I developed a youthful attachment to the DC characters that I’ve never shaken, but Spidey was my first encounter with the new kids on the block characters when an Amazing Spider-Man cover caught my attention from atop a pile of comics my brother brought home that was, as usual, off limits to my comic book hungry eyes. I was forbidden to touch “his stuff,” so I kept my hands off. 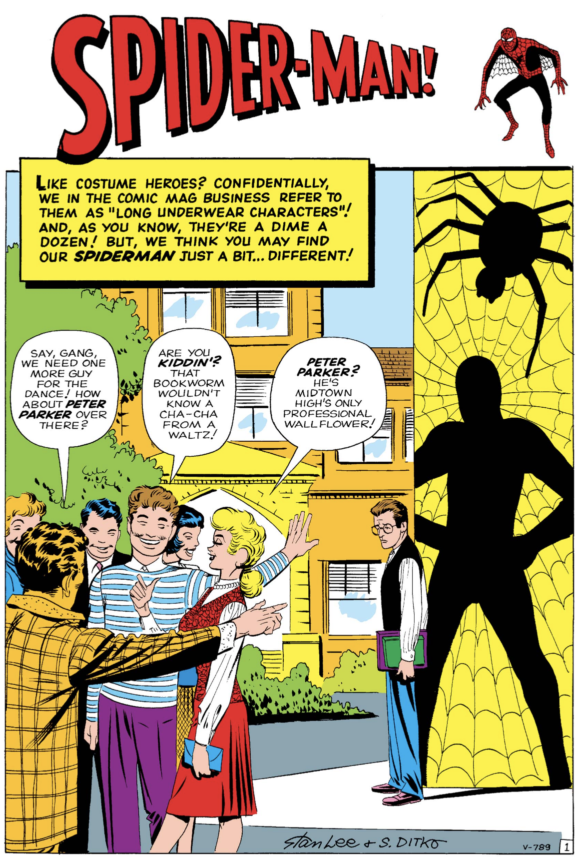 Until he wasn’t home. Then I read everything I could pluck from his shelf, handling them all gently so as not to leave evidence of my presence. After reading the story under that cover (see below), I had to read what came before, so I went back to AF #15 (I believe in Marvel Tales, one of the 64-page giant reprint titles) and read my way forward.

Spidey led me to the Fantastic Four, which pointed me to the Human Torch strip in Strange Tales, where I found another mind-boggling strip by Steve Ditko, Dr. Strange, and so on and so forth.

One of the best things about the webslinger was his rogues gallery, a line-up of bad guys on par with Dick Tracy’s or Batman’s, with many of them based on creepy, crawly models: chameleons, cats, vultures, octopi, lizards, goblins, scorpions and rhinos. 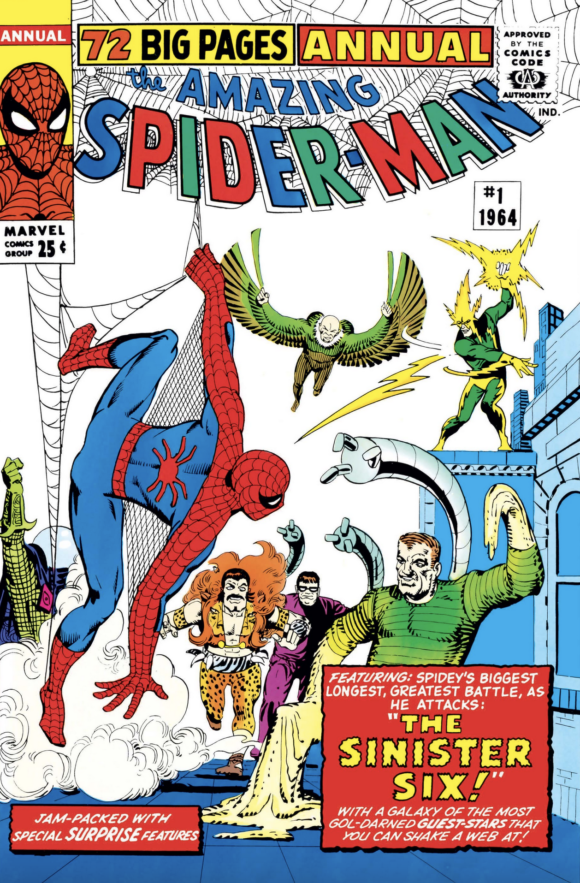 I stuck with Spidey a long time, through John Romita, Gil Kane, Ross Andru and a long succession of follow-up writers and artists. In 1979, I was hired by Marv Wolfman and Len Wein to write a pair of Spider-Man novels and, while I didn’t bring anything that made it over into the comic book universe, it was still cool to get to play with one of Marvel’s big guns, and it was my first experience taking a deep dive into the mind of a superhero beyond the limitations of comic book captions and thought balloons.

But enough about me. Here are MY 13 FAVORITE THINGS ABOUT  SPIDER-MAN – RANKED:

13. Spider-Man ’67 Theme Song Cover by the Ramones. The best cover of the catchiest cartoon theme song ever!

12. Spider-Man Cartoon (1967-70). I ain’t gonna lie to you, the 1940s Superman cartoons by the Fleischer Studio had nothing to worry about in terms of competition when it came to the Grantway-Lawrence Spider-Man cartoons of the late-1960s. But by the time this show debuted, there was very relatively little Marvel or DC animation out there: Filmation’s New Adventures of Superman had been out a year (and was being joined by Aquaman and other DC heroes) and there was the very limited-animation Marvel Super Heroes. In that landscape, Spider-Man (and the short-lived Hanna-Barbera Fantastic Four) had its charms, including a variety of great villains.

11. Amazing Fantasy #15 (Aug./Sept. 1962). If for nothing else (and there’s plenty else!), the eponymously titled “Spider-Man” is one of the best examples of economy in storytelling (they only had 11 pages) in introducing a character I’ve ever seen. In the first two pages the reader learns everything they need to know about Peter Parker to go forward. Just two pages, but they’re beautifully set and skillfully written to paint a rich picture filled with subtext that set the character up for years to come. 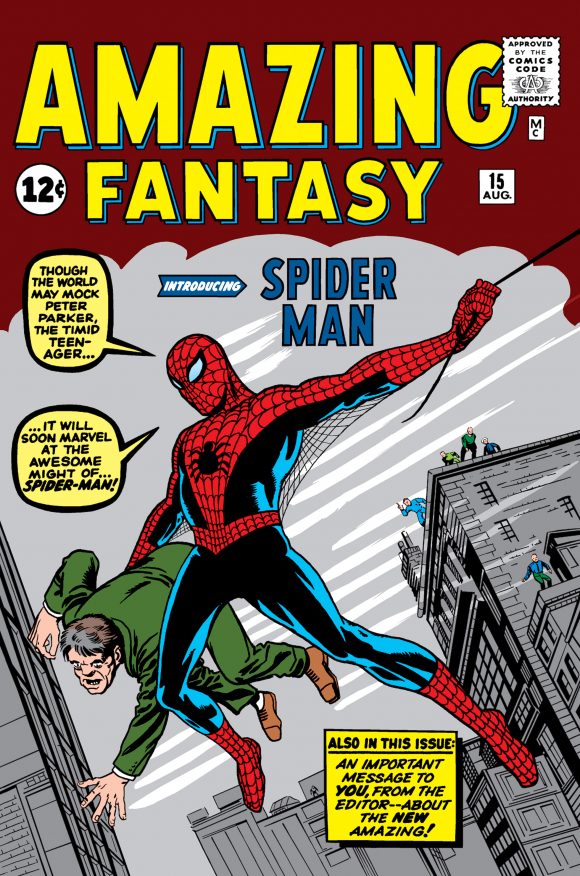 10. Amazing Spider-Man #1 (March 1963). Yeah, one of Peter’s charms was the youthful cockiness that came with his acquisition of superpowers… or, could it be, from the anonymity that came with wearing a mask? You be the judge but being able to do what a spider can made him arrogant enough that he thought the Fantastic Four would be willing to go through the hassle of changing their name and logo to make him a member of the team. For a paycheck yet! 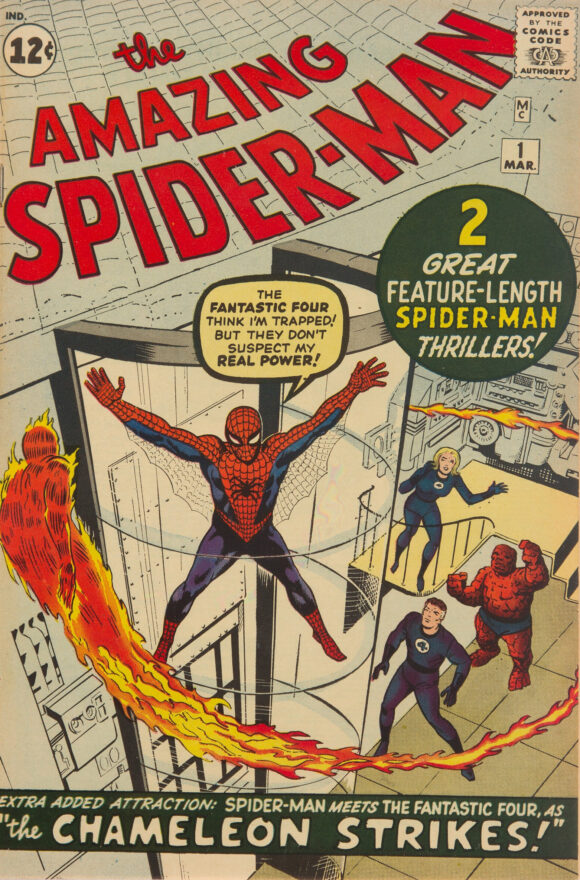 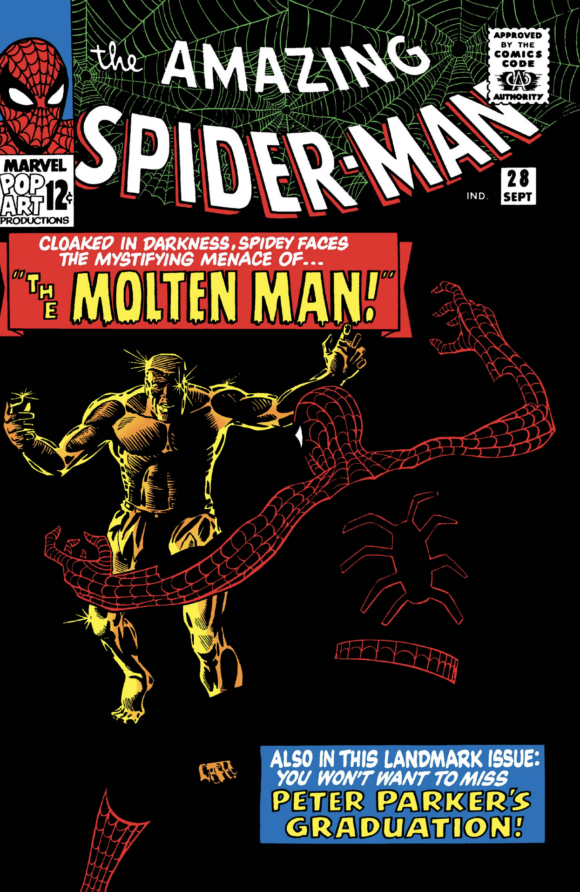 8. Amazing Spider-Man #30 (Nov. 1965). Some of Ditko’s Spider-Man covers were better than others, but even the worst were awesome, and the best were this… 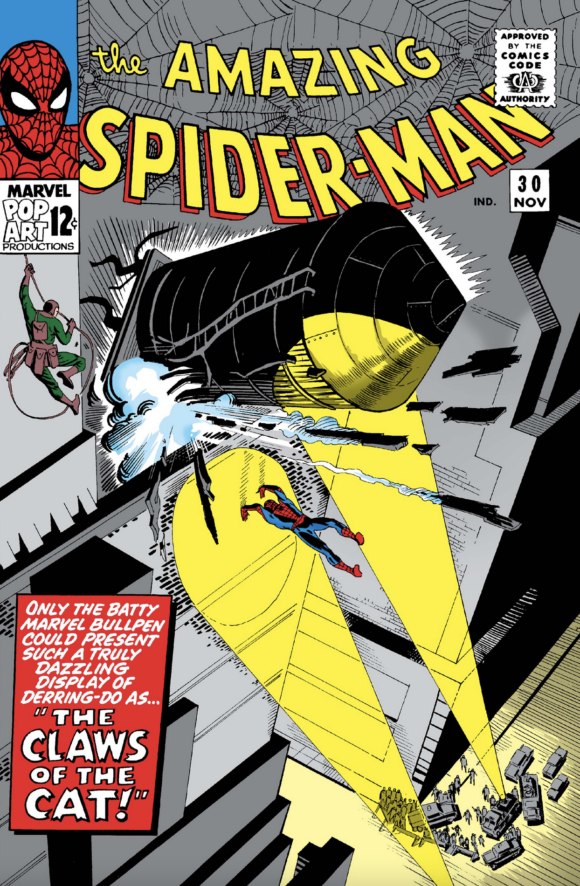 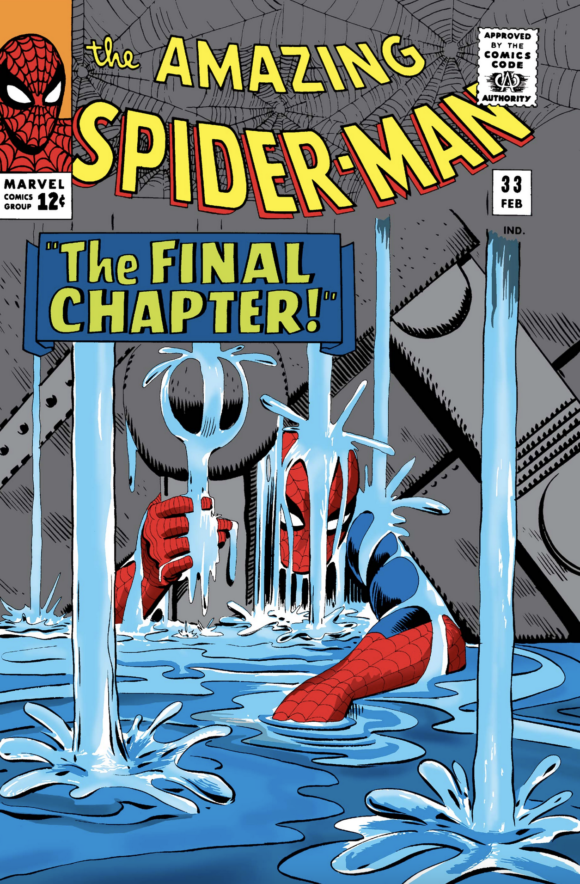 6. The Amazing Spider-Man in Crime Campaign (Marvel Novel Series #8) and the Hulk and Spider-Man in Murdermoon (Marvel Novel Series #11, Pocket Books 1980). I only ever wrote a couple of fill-in stories for Marvel, but I did write a pair of novels starring the wallcrawler (and Hulk). These books were standalone tales, set in the Marvel Universe but not, as far as I know, ever considered canon. Well, Murdermoon should be used for canon-fodder, but Crime Campaign isn’t bad and the covers by Bob Larkin kick ass.

5. The Spectacular Spider-Man #1 (July 1968). You hadda be there! When this 64-page black-and-white magazine starring the Friendly Neighbor You-Know-Who hit the newsstands it was with little fanfare outside of Marvel house ads, but it featured a great “book-length super Spidey spectacular” — “Lo, This Monster,” by Stan Lee, Romita and Jim Mooney, presented in gray wash tones instead of color. Plus, “In the Beginning,” a 10-page retelling of Spidey’s origin by Lee, penciled by his brother Larry Lieber and inked by Bill Everett. 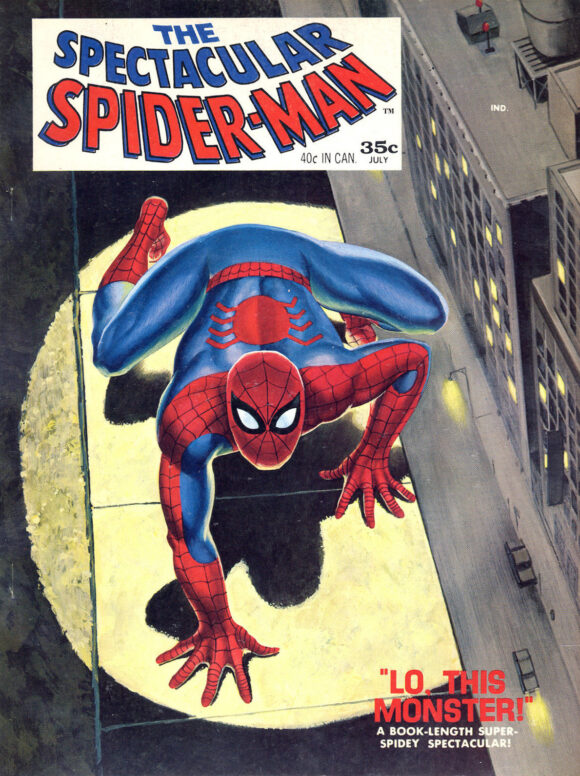 3. The Amazing Spider-Man (CBS, 1977). Yes, I watched the oh-so-corny and oh-so-low-budget Amazing Spider-Man through all 13 episodes over two seasons because it was corny and low budget (I was 22 and quite the young cynic). And yes, I did often laugh at its antics, but goofy wasn’t enough to keep me from coming back, otherwise I would have watched more than 20 minutes of one episode of Six Million Dollar Man. It had spunk. CBS hated spunk! 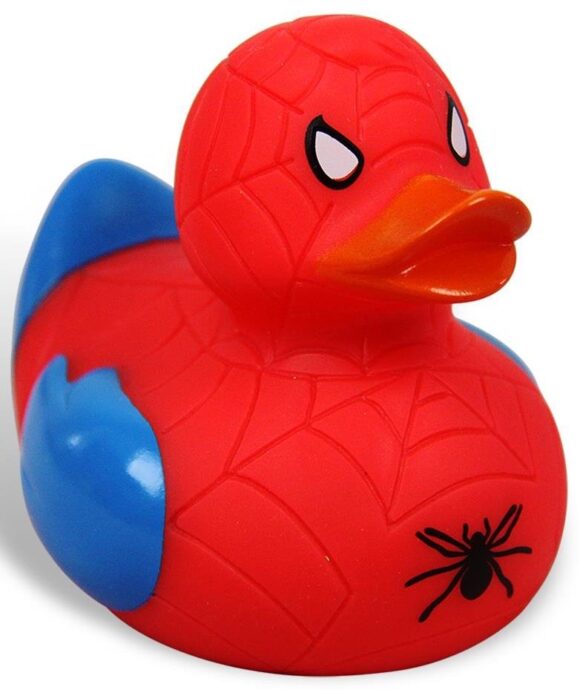 1. Steve Ditko (Nov. 2, 1927 – June 29, 2018). There could be only one! He was amazingly prolific, turning out I can’t imagine how many thousands of pages for Charlton, Marvel, DC and others, but the quality of the work never diminished, although that’s sometimes difficult to tell under some of the careless inking he received in later years. Ditko was best when left to his own devices and his own pen. 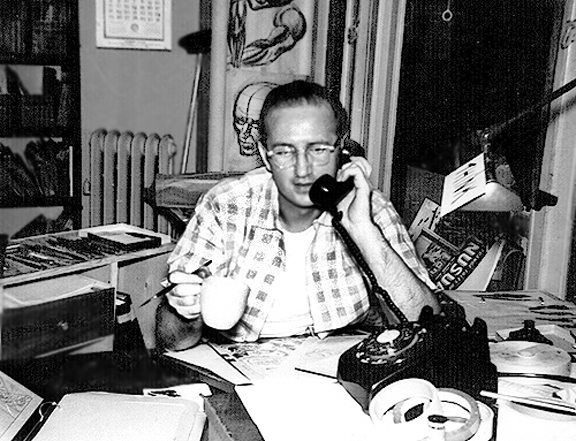 Paul Kupperberg’s Crime Campaign and Murdermoon are available in pdf form for a mere $7 each, payable to Pkupperberg@gmail.com on PayPal. (Please use friends and family option.) Paul scanned and oversaw the digital reconstruction of both books.