The celebrated Mr. K pays a birthday tribute to an artist whose career spanned the Golden, Silver and Bronze Ages…

Joe Giella (born 94 years ago on June 27, 1928) seemed to be the inker of practically every DC comic book I loved as a kid and later, after I had achieved adulthood (according to the calendar anyway), he was assigned to ink a number of stories I wrote. He’s listed on Mike’s Amazing World of Comics (http://www.mikesamazingworld.com/mikes/index.php) as comics’ 11th most prolific inker even though he was largely retired from regular work by 1984, 38 years ago (my Adventures of Superboy looks to be his last regularly assigned book).

Joe got his start in 1947, long before I was aware that either he or comic books even existed, inking features like Black Canary, Johnny Thunder, Wildcat, Jimmy Wakely, the JSA, King Faraday (in Danger Trail), the Trigger Twins, Knights of the Galaxy, the Phantom Stranger, Captain Comet, Detective Chimp, Hopalong Cassidy… not to mention scores of one-off science fiction, war, Western, and other genre stories.

There were a couple of constants throughout Joe’s career. One was that he did 98 percent of his work for DC Comics, with a few Marvel jobs scattered over the years, some Archie Comics work (on their Mighty Heroes line in the ’60s), and credits on a handful of stories for Tower Comics. Another was that probably 60 percent of the work he did at DC he did for editor Julie Schwartz, and likely 50 percent of those jobs was his inking over Carmine Infantino.

You can learn more about the fascinating life of this comics legend (who I was fortunate enough to meet on a couple of occasions at Terrificon) here, but the best way for his fans to celebrate his 94th birthday is by celebrating his work!

The Flash #123 (Sept. 1961). As I’ve noted often in this space, “The Flash of Two Worlds” is one of the most important stories of DC’s Silver Age, introducing the concept of the Multiverse into the DCU. It’s also the story that forever cemented my love of comic books in general, DC in particular, when I saw that the Multiverse and I shared the same birthday: June 14. Joe Giella’s inks over Carmine Infantino’s pencils (from a script by Gardner Fox) will forever hold a special place in my heart. 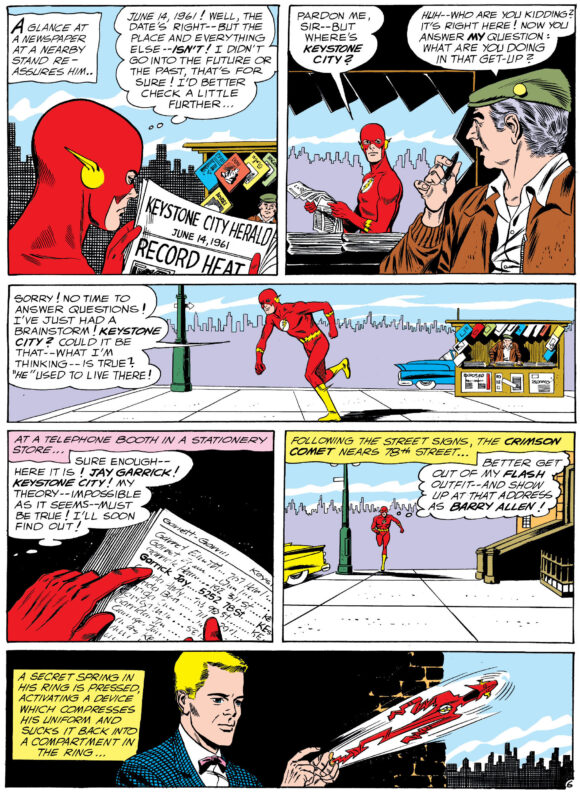 (And on my wall; several years ago, John Byrne reproduced the panel for me as a birthday gift.) The Brave and the Bold #45 (Dec. 1962/Jan. 1963). Sports have never played a role in my life; I’ve never watched or played them, just like my daddy afore me, and there is not a single sporting event the world over about whose outcome I give even the remotest damn. And yet, I have a certain fondness for stories and films about sports (and no, Rudy does not make me tear up), go figure. And comic book sports stories with a science fiction bent like Julie Schwartz’s experimental Strange Sports Stories were right up my alley, especially as drawn by Infantino and Giella! Green Lantern #25 (Dec. 1963). Giella inks Gil Kane on “War of the Weapon Wizards” (by Fox)! I always loved that spotty thing Joe did to give texture to metal and fabric. 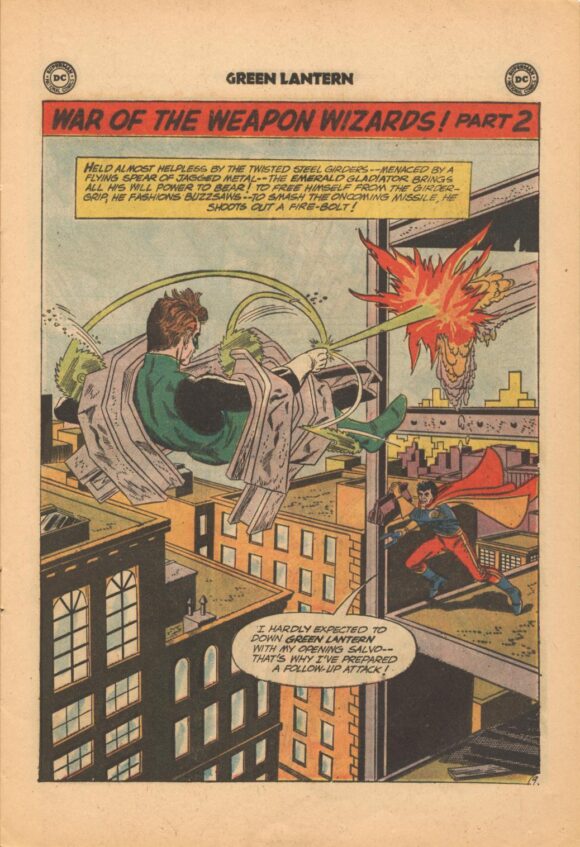 Detective Comics #327 (May 1964). This is another pivotal Silver Age tale, Schwartz’s editorial debut on the “New Look” Batman titles, a shocking change from the previous cartoony take on the Dark Knight by artists like Shelly Moldoff. Page 2 of “Mystery of the Menacing Mask,” by John Broome, Infantino and Giella, is one of my favorite non-costumed comic book pages of all time. The layout and pencils are perfect, and Joe pulls Carmine’s (notoriously) sketchy pencils together for a magnificently evocative scene. 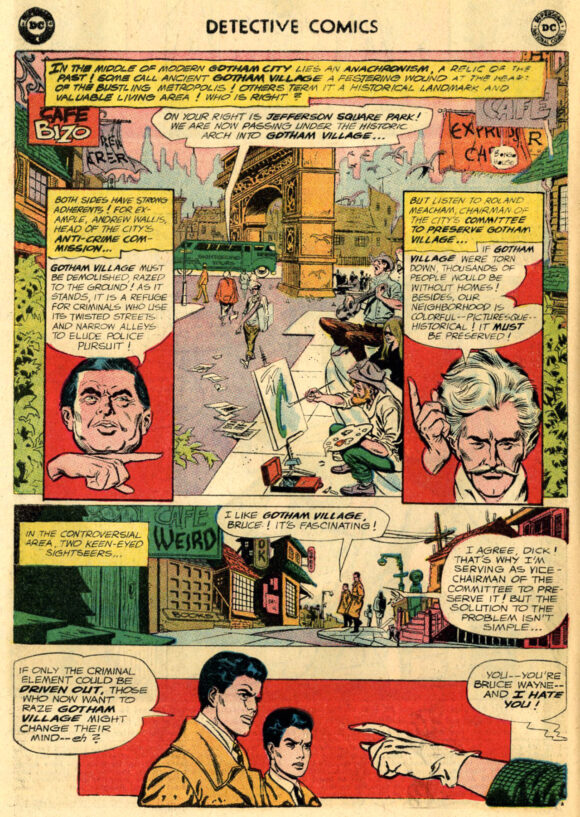 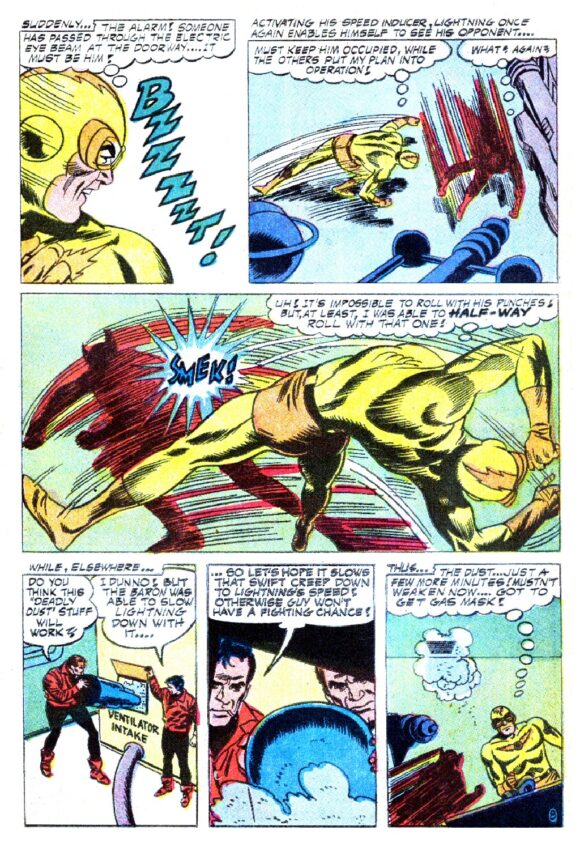 Adventure Comics #463 (Feb. 1978). I was too young and too stupid to realize how vastly outclassed I was by every other name in that credit box… Don Heck, Joe Giella, Ben Oda, Gene D’Angelo, Ross Andru! 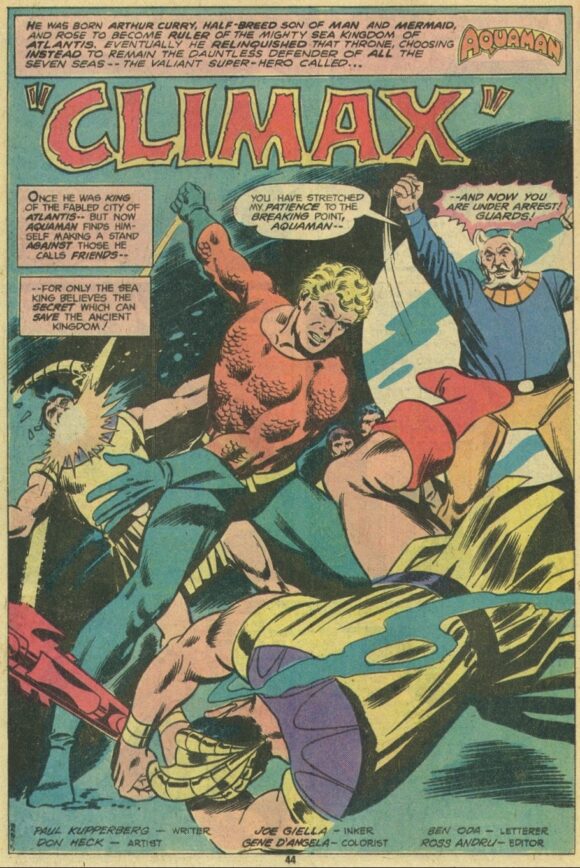 Steel the Indestructible Man #1 (March 1978). A more memorable Heck/Giella collaboration, “From Hell is Forged… a Hero!” written by Gerry Conway. 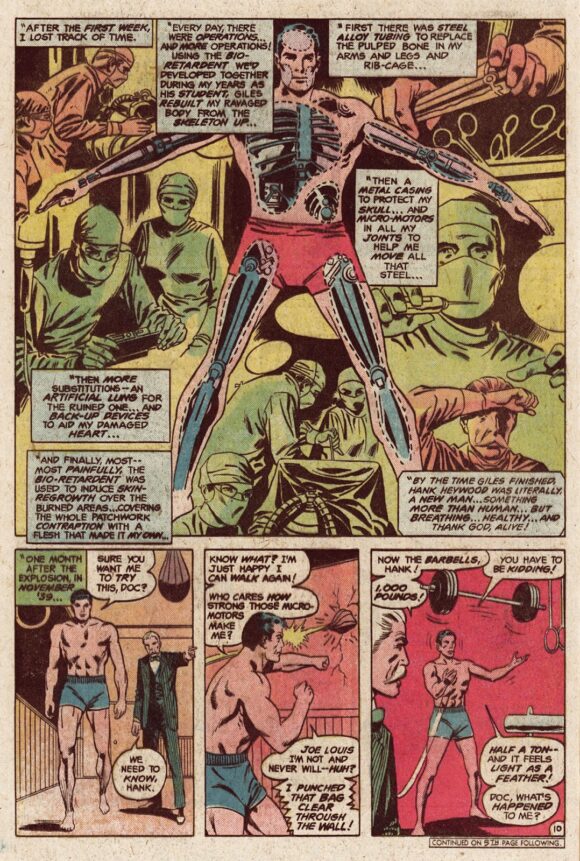 Weird War Tales #86 (April 1980). Joe could ink anybody, including the guys who were usually best served being their own inkers, like Jack Sparling. “Into Thin Air,” written by Jay Zilber, also proves that despite all those open, bright superhero stories he worked on, Joe could also deliver the dark and moody. 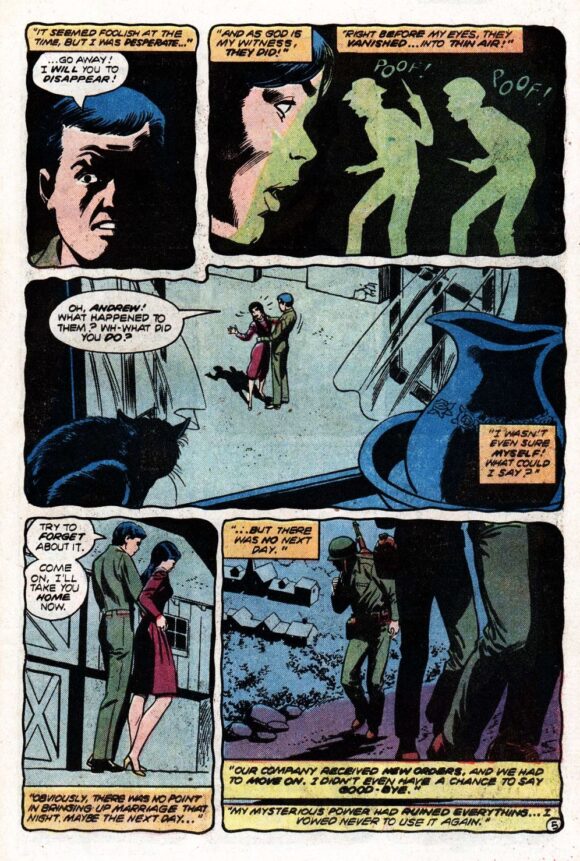 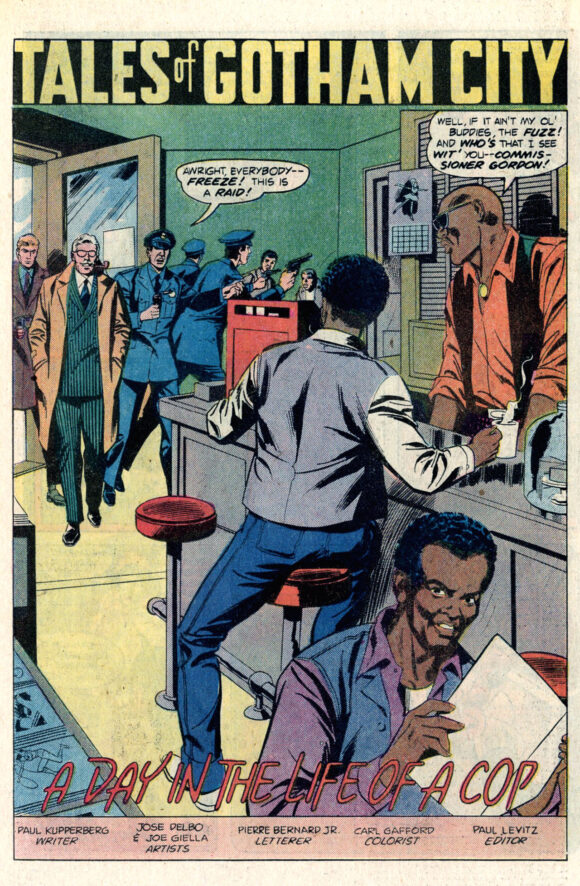 Superman Family #216 (March 1982). Another another one by me. (I warned you!) “The Comic Strip Avenger” stars Jimmy Olsen investigating murder among cartoonists and penciller Delbo chose to model one of those artists after Joe Kubert, a reference inker Giella caught and carried out. 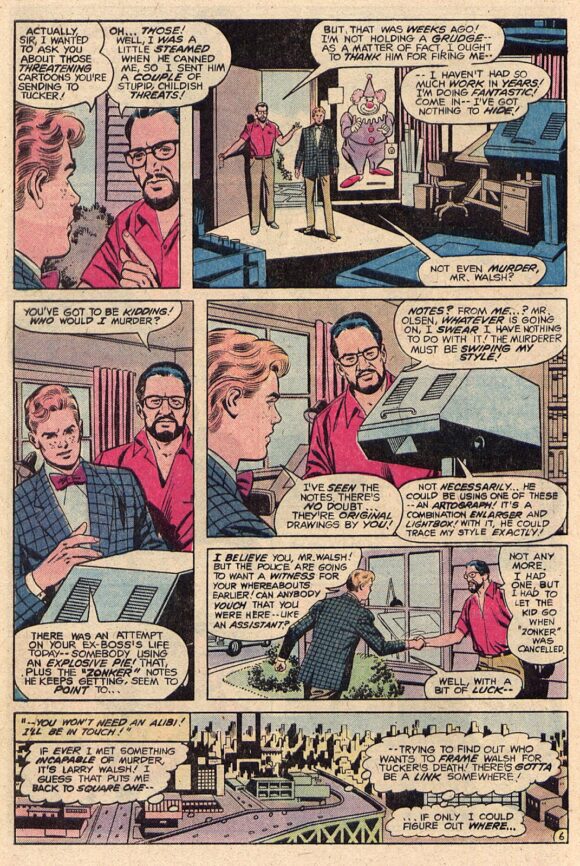 The New Adventures of Superboy #53 (May 1984). What’s the next best thing to having Kurt Schaffenberger ink himself? Having Joe Giella on the job! 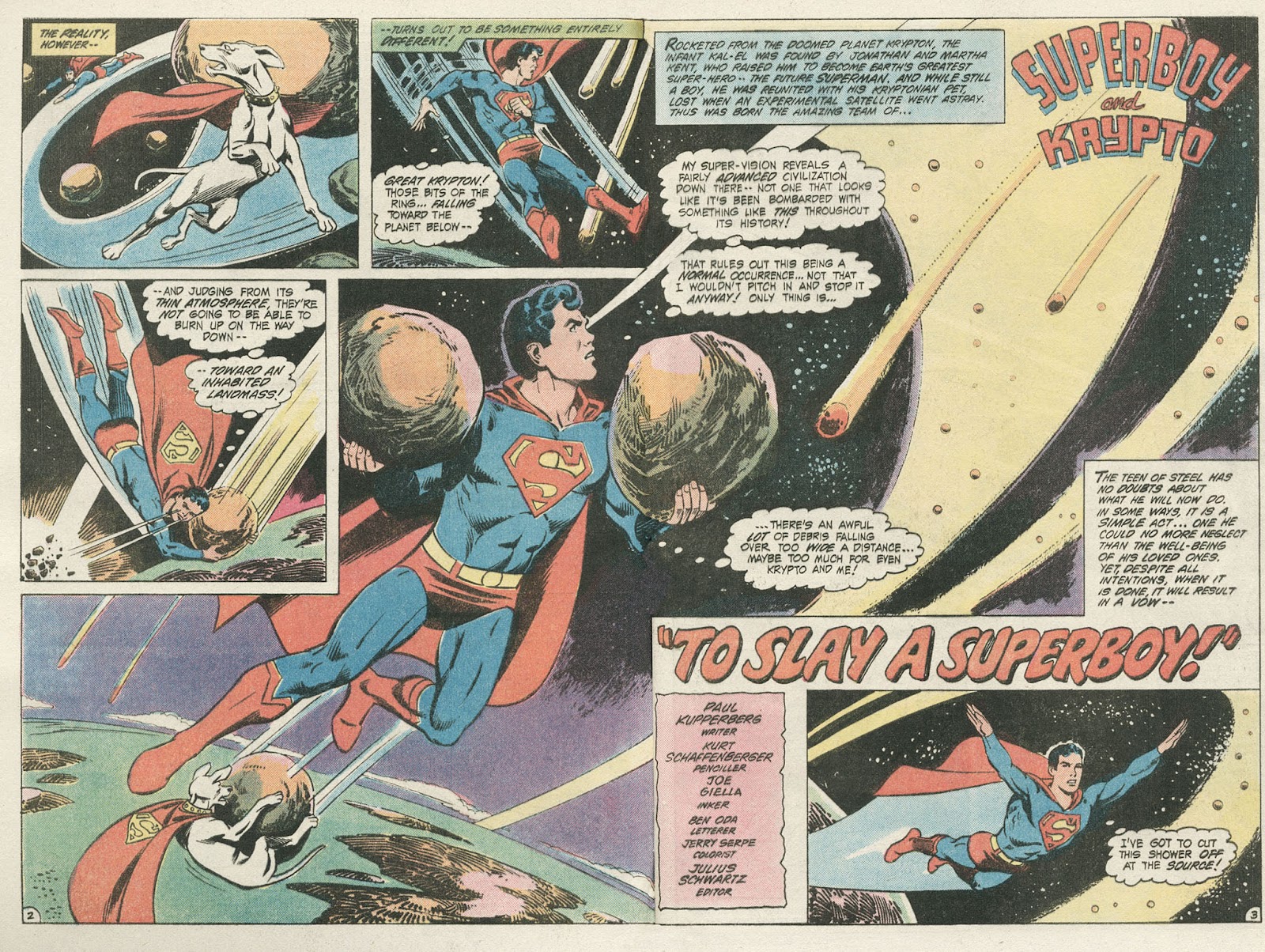 Superman Album #11 (1984). You’ve probably never seen this story… unless you were a reader of the DC Comics published by European publisher Ehapa in the 1980s! Long story short, the appetite for Superman stories in the European market had out-paced DC’s monthly output, so Schwartz’s office was charged with creating new 46/48-page graphic novels (or albums as they’re known there).

There would be a total of 25 new stories produced, almost 1,100 pages of story and art, of which I wrote nine, close to 400 pages, including “The Sun-Stealer of Space” with art by Irv Novick and Giella. This wasn’t one of the nine stories reprinted as specials, annuals, or two-parters in Superman and/or Action Comics*. (I wrote about these “lost Superman stories” in Back Issue #134 (April 2022) in “Truth, Justice, and the European Way: The Untold Tale of 25 Superman Tales Untold… in the U.S.”) 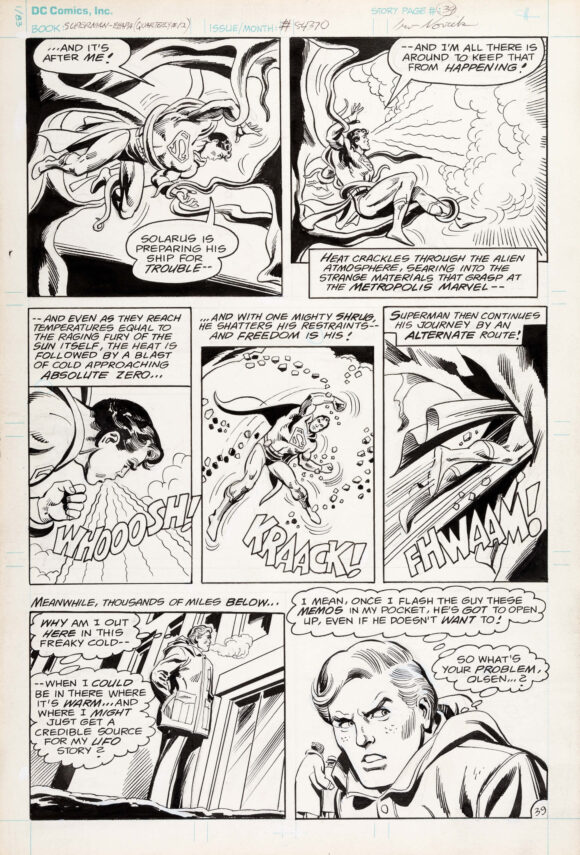 *By the way, just saying, tossing this out there for discussion, but does anyone else see the potential for an Omnibus Edition of these stories (1,084 pages in total, 720 of which never saw print in the U.S.) from DC? Somebody should bombard them postcards and letters or whatever the heck it is you kids send demanding it!