“I got the opportunity to do a coloring book of the DC superheroes at the art studio, and the client was the Western Publishing Company, which is in Racine, Wisconsin. That ultimately got me noticed by DC Comics, because they had to approve the art. Almost a year later, I took the art samples that I had to the Chicago comic convention in the summer of 1980, where I heard that they were looking for talent.

“I showed them to Joe Orlando, but he was kind of burned out by then, having spent days looking at samples, there were just so many people. Then Paul Levitz came by, looked down at the work, and just totally floored me. He looked up and said, ‘Oh, Jerry Ordway. We’ve been trying to get a hold of you.’ He took my number, I went home, and started getting scripts for stories for Weird War Tales and things like that, and then, ultimately, All-Star Squadron.”

— Jerry Ordway, from Direct Comments: Comic Book Creators in Their Own Words

Jerry Ordway is known for a lot of extraordinary work in his roughly 40-year run in comics. He was one of those artists whose very earliest jobs at DC Comics made readers ask, “Wow! Where has this guy been?”

The answer in the early 1980s was: “I came back to Milwaukee and set my sights on getting a job in commercial art, because I thought comics didn’t want me. But getting the job in the art studio did eventually lead me back to DC. I was doing a lot of day-to-day commercial art stuff for Schlitz Beer, Evinrude Motors, and other Wisconsin-based companies.”

By the time Jerry gave the 1990 interview that appears in Direct Comments: Comic Book Creators in Their Own Words (click here to order from Amazon), he had already proved himself on the Justice Society of America titles, Fantastic Four, Crisis on Infinite Earths, Superman, and was showing off his Batman chops on DC’s comic book adaptation of Tim Burton’s movie. And he’s continued to do amazing work in the 30-plus years since, including, of course, his acclaimed run on The Power of Shazam!… 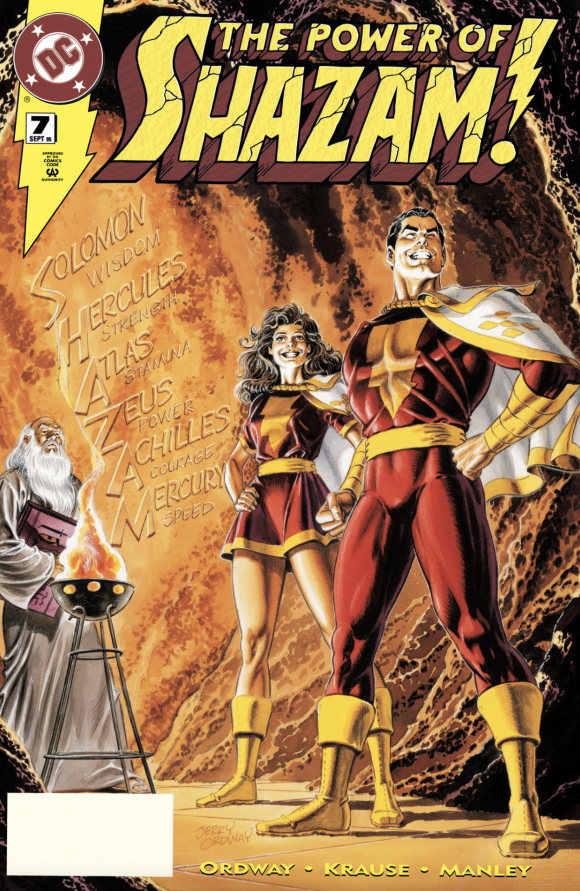 … But it’s Jerry’s contributions to the JSA I choose to praise today. The iconic heroes of the Golden Age have always had a soft spot in my fannish heart. The idea of the Multiverse was mind-blowing to 10-year-old me when I first read a reprint of “The Flash of Two Worlds” in a Flash Annual and I continued to be fascinated by the way the revived heroes were introduced and interwoven with their “modern” counterparts. Forty years later, I would write a novel starring the heroes of the JSA, and 15 years after that, JSA: Ragnarok was finally published. (Click here to order).

All-Star Squadron #20 (April 1983). An intriguing setting, an iconic shot of a favorite Golden Age hero, and floating heads! It was only Jerry’s second cover for All-Star Squadron, but he already had these characters nailed. 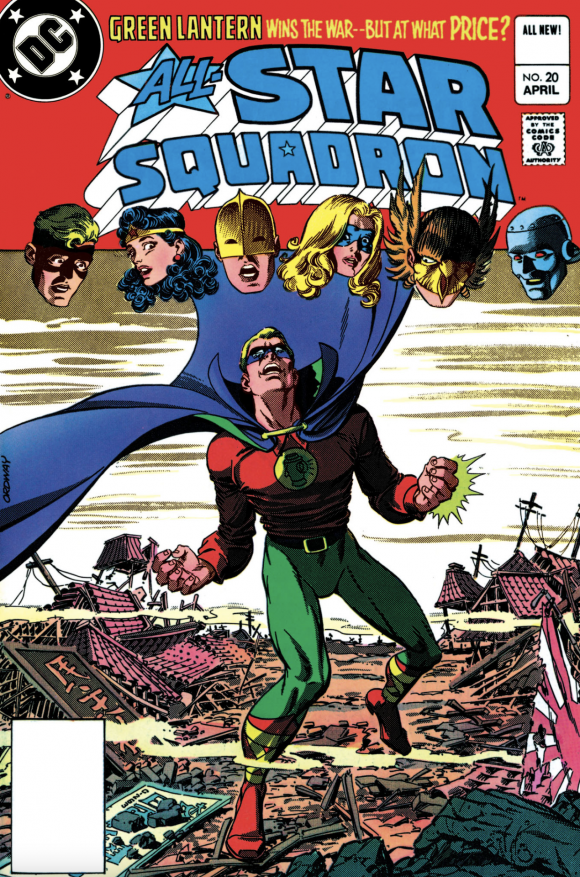 All-Star Squadron #22 (June 1983). I don’t know who was in charge of designing covers in 1983, but you can’t go wrong with a classic charging superheroes and supervillains cover. Jerry handled this eight-character tableau with ease, jamming them all in there without any indication they’d been jammed in there. I also always loved his depiction of the Golden Age Superman who (subtly) takes center stage on this cover. 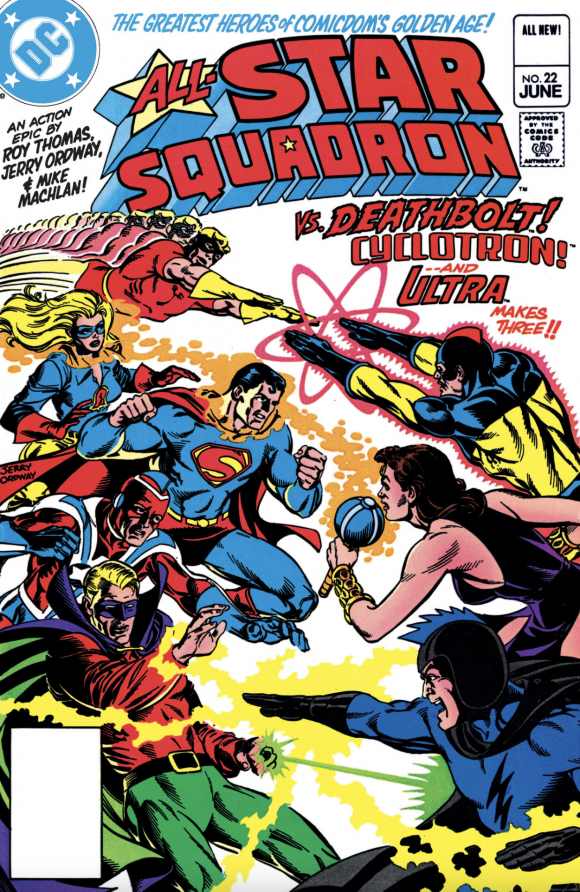 All-Star Squadron #28 (Dec. 1983). There used to be artists who begged not to be assigned books like Justice League of America and Legion of Super-Heroes because it was exhausting to draw those six panel pages with eight characters per panel. But Jerry quickly proved he wasn’t one of those, surrounding a giant Spectre with seven opponents and, just for the heck of it, a handful of fleeing citizens. 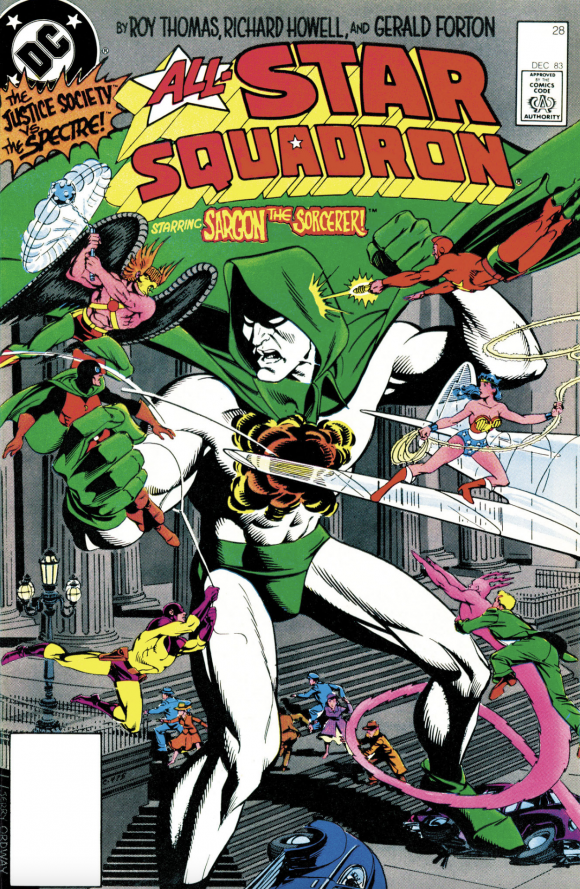 All-Star Squadron #29 (Jan. 1984). I promise I won’t keep harping on the character counts of these covers, but this number is baked into the name of the guest-starring group, the Seven Soldiers of Victory. Eight, if you count the horse, Winged Victory. Bring ’em on! 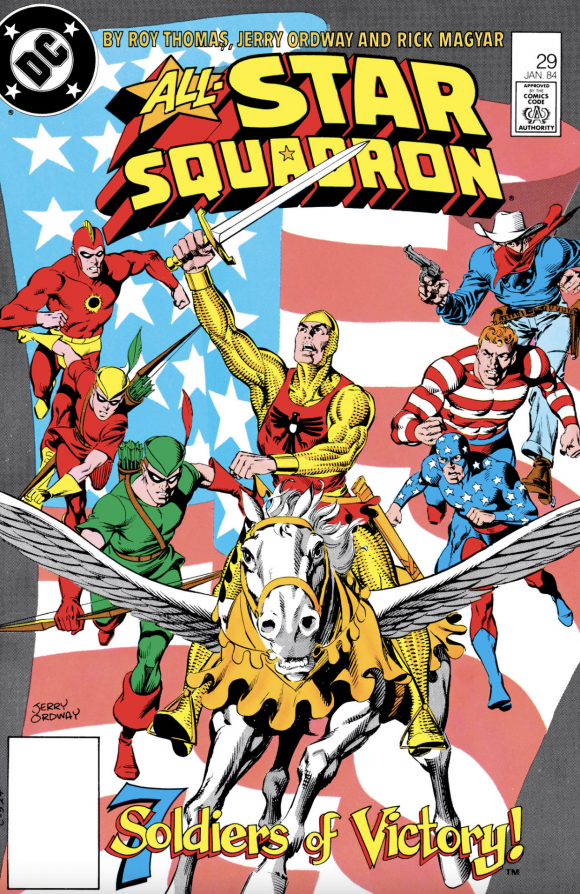 Infinity Inc. #3 (June 1984). A menacing monster cover with Solomon Grundy looking as mean as can be! 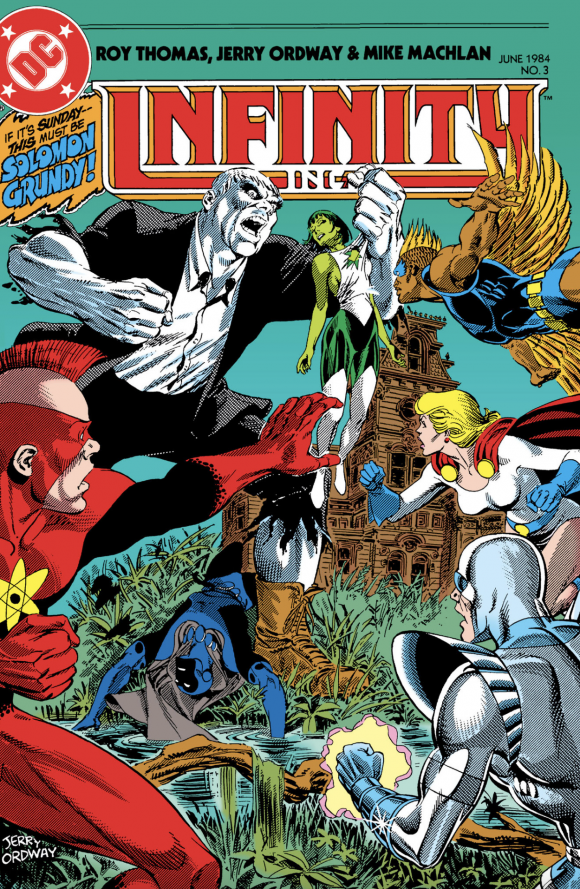 Infinity Inc. #7 (Oct. 1984). Not a monster, but a berserker Superman is a lot scarier than some swamp creature. This one has old school newsstand appeal, a cover that would have had me lunging for the rack as a kid to find out what was going on. 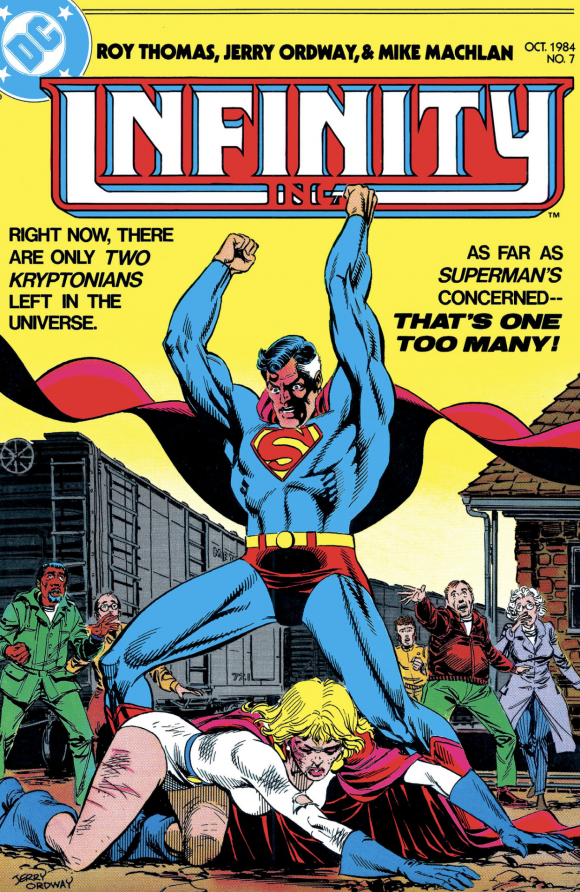 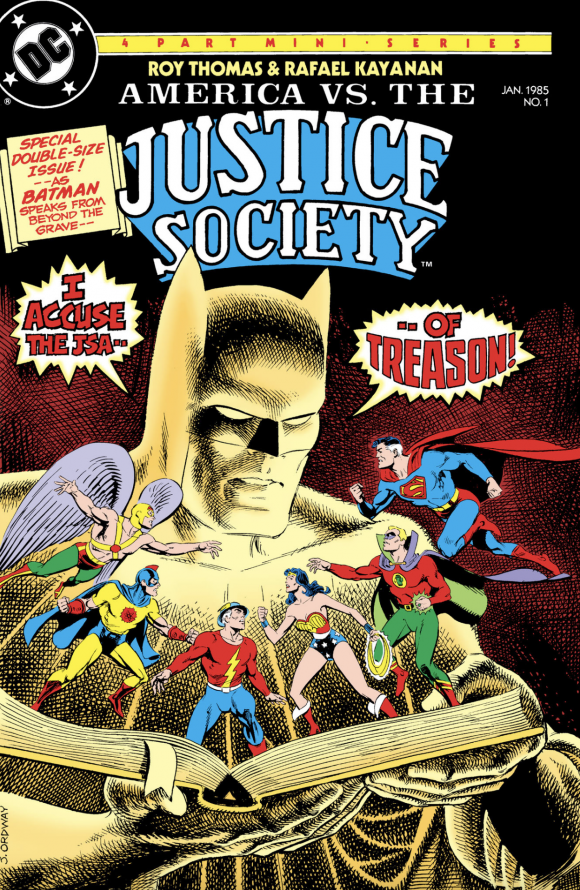 All-Star Squadron #41 (Jan. 1985). Just to validate my JSA cred, I was one of only two writers Roy Thomas called on to help him when deadlines were threatened by dialoguing issues of All-Star (the other was Mike Baron). “The Origin of Starman” was one of three issues I worked on and by far my favorite cover. Technically it’s an Arvell Jones cover (not that there’s anything wrong with that!), but Jerry inked it so that’s good enough for me. 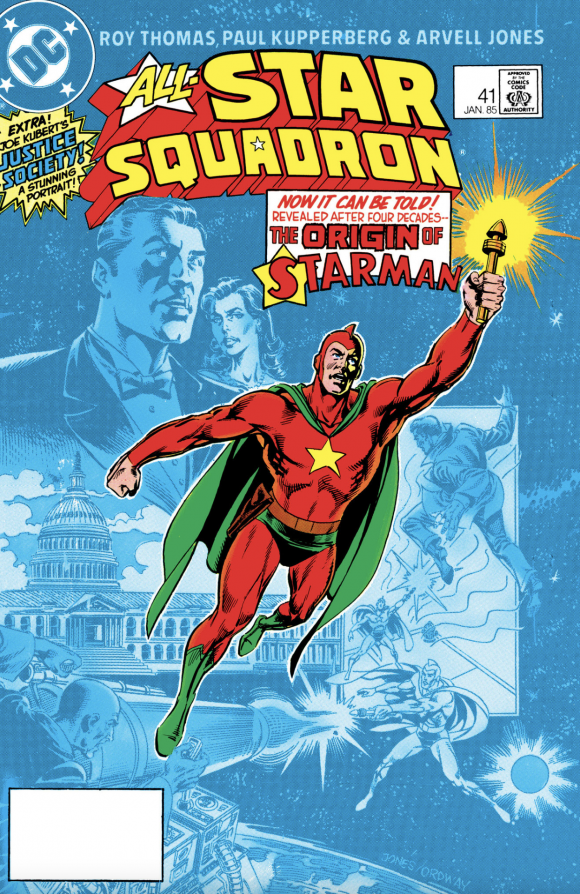 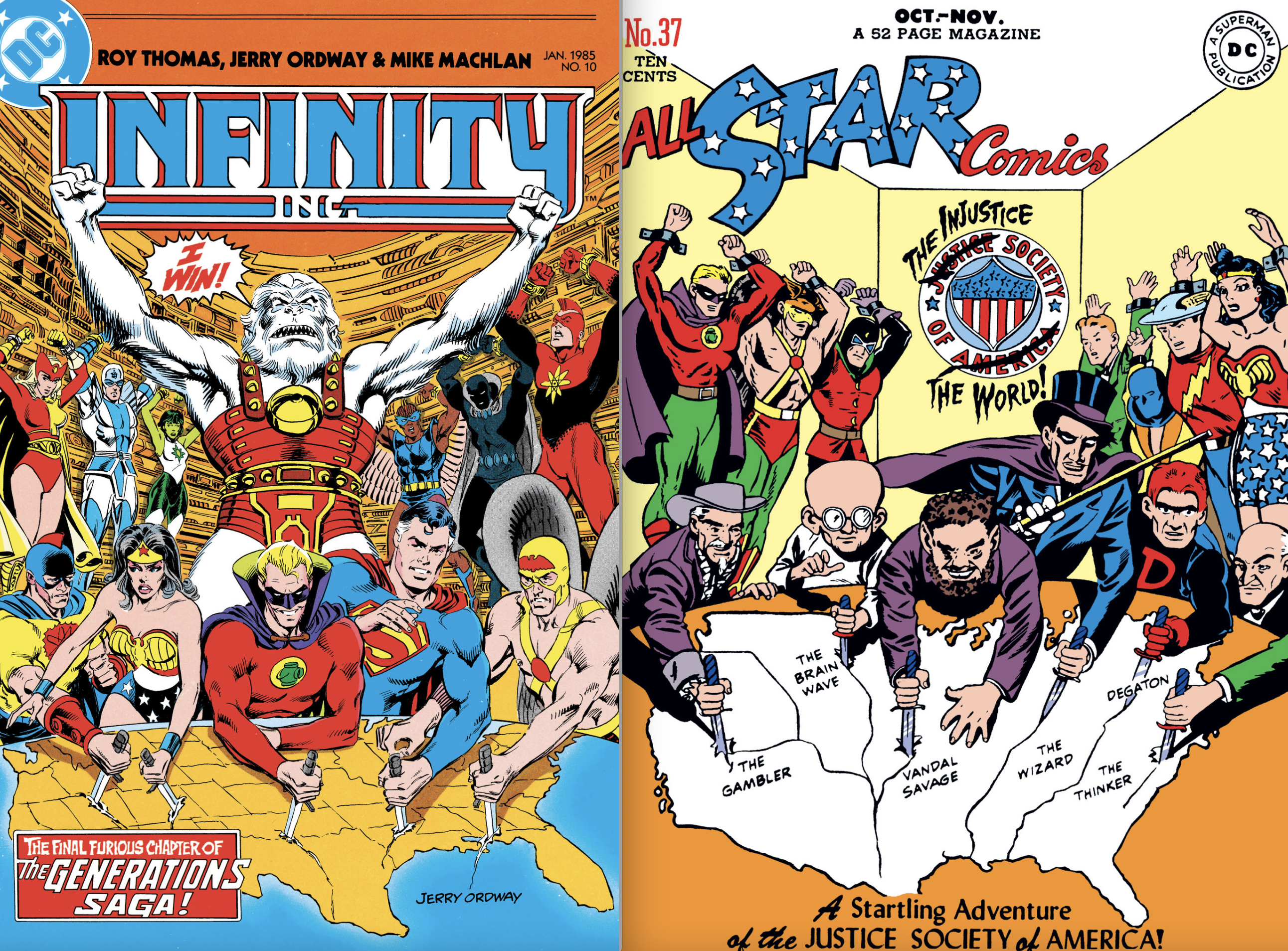 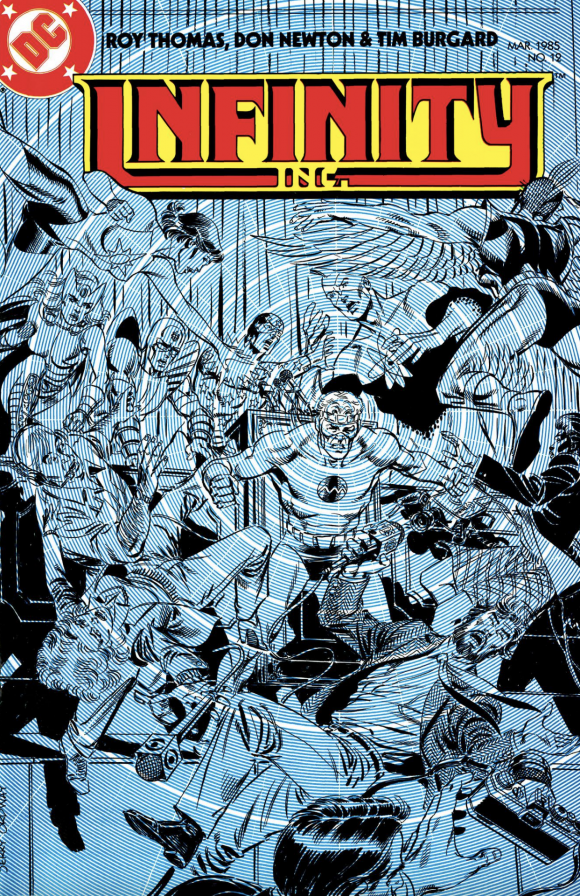 Who’s Who: The Definitive Directory of the DC Universe #12 (Feb. 1986). It’s not a cover, but it is Jerry’s illustration for the definitive JSA, so I’m granting an exemption. 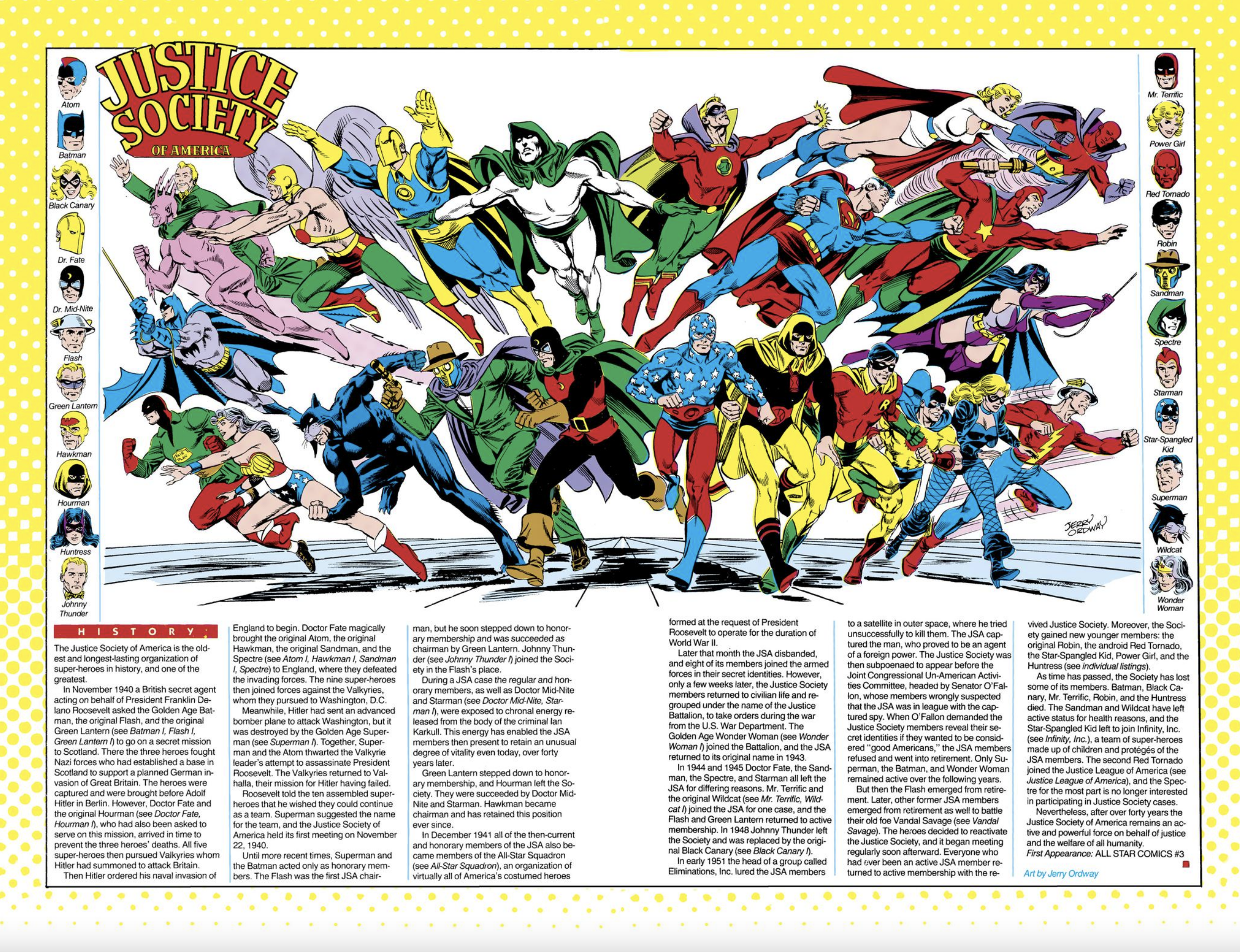 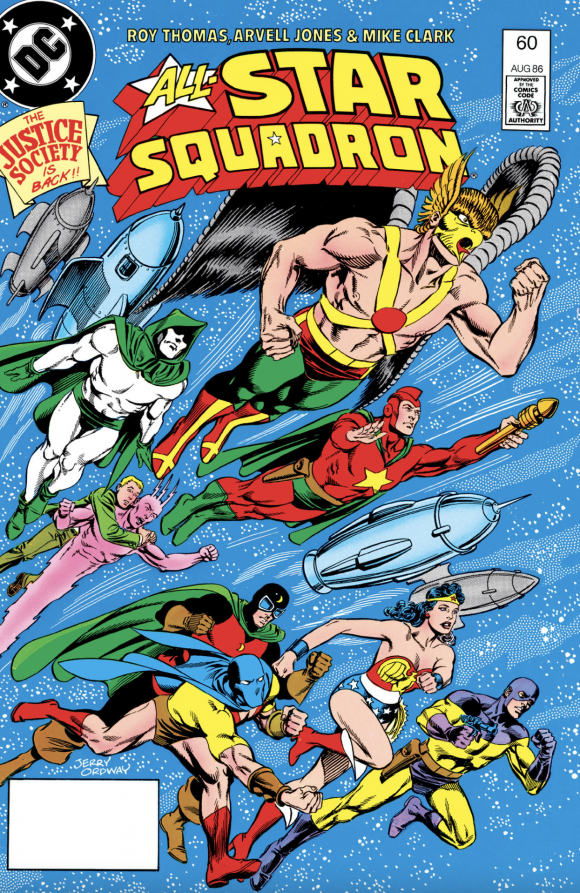 Justice Society of America #27 (Aug. 2009). Jerry more than held his own with this piece, which followed immediately on the heels of a 26-issue run of painted covers by Alex Ross. The first of a two-part Ordway written and drawn tale. 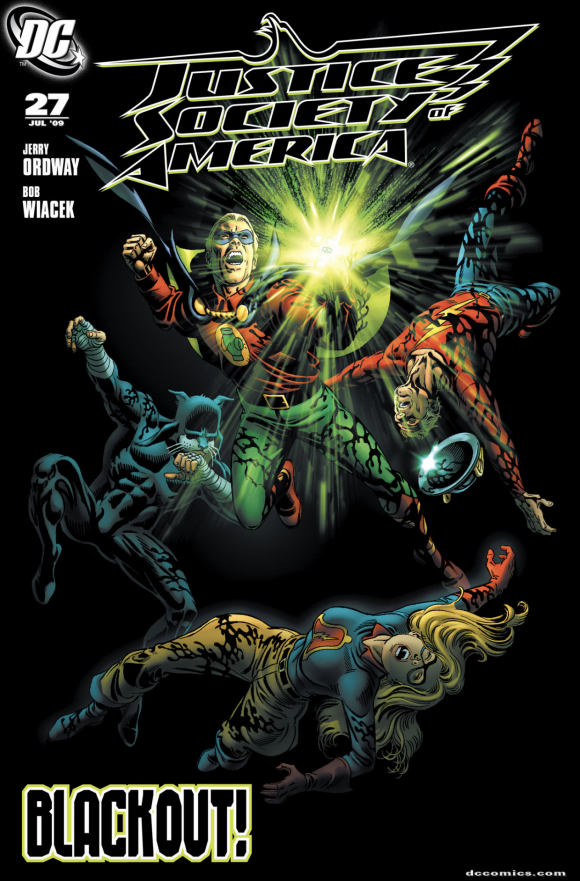 “And then an event happened in the very early 1960s which changed my entire life. I started reading Marvel. Marvel was responsible for me staying with reading comics longer than I probably would have. But they were also responsible for my finally stopping, so it all balances out. I stopped reading comics when I was about fifteen. I didn’t come back until I started seriously thinking about getting into it as a job, whereupon I had a lot of catching up to do. Fortunately, I came back at just the right time for DC, because I hit all that Jack Kirby stuff when Jack returned to DC in 1970, with the Demon, the New Gods, all the really hot stuff.”