A BIRTHDAY TRIBUTE: And covers too! 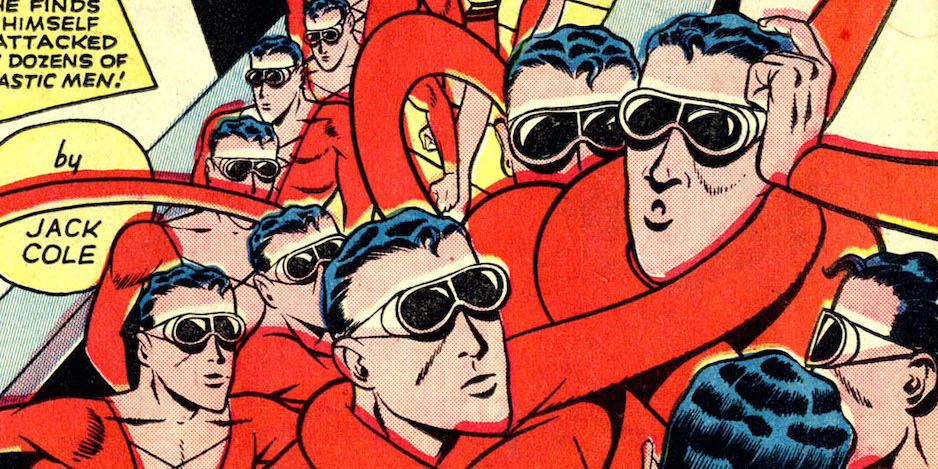 Your opinion may, of course, differ, and that’s fine (although you’re wrong), but I was so taken by the character and concept that I immediately fell in love with Plas despite the fact that my first exposure to him was Arnold Drake and Gil Kane’s interpretation of the Golden Age great in DC’s Plastic Man #1 (Nov./Dec. 1966). 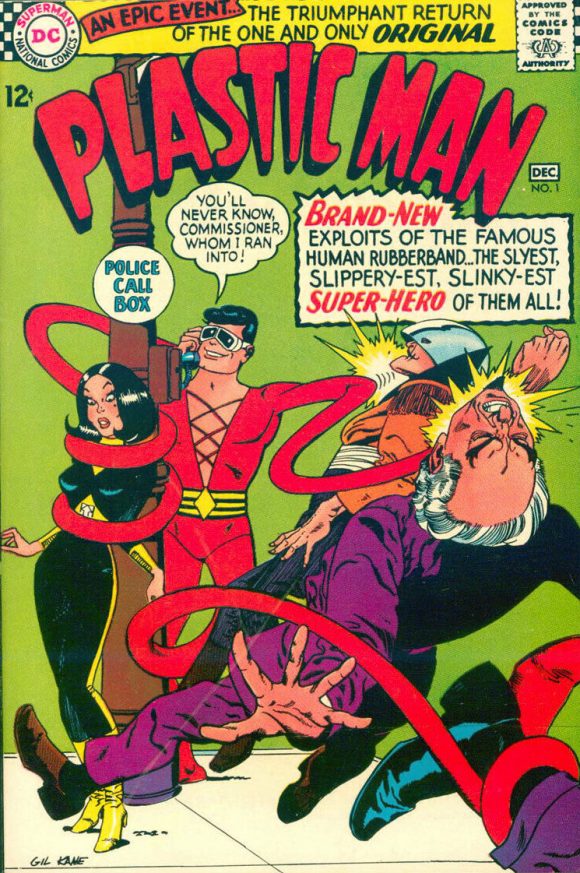 This was not a very good comic book. And it was a terrible Plastic Man story. Drake’s humor, I was to discover, was too broad for the strip, better suited to the slapstick of Jerry Lewis and Bob Hope (both of whose “Adventures of” comics Arnold also scripted) than Cole’s absurdist approach. But then, it’s been my sad experience that no creator other than Cole has ever been able to really get Plas quite right, myself included (as I proved in DC Challenge #7 and DC Comics Presents #93). 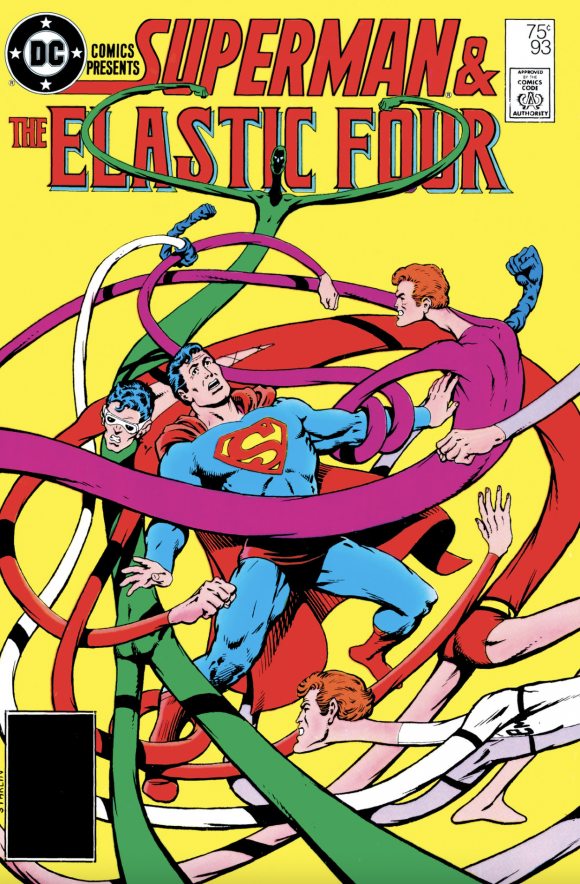 I learned that shortly thereafter, when I crossed paths first with Jules Feiffer’s The Great Comic Book Heroes (Dial Press, 1965), which reprinted Plastic Man’s origin from Police Comics #1 (Quality Comics, Aug. 1941), and then a few years later, in an illegally published run of 1963 Plastic Man reprints from IW Comics that I ran across in back issue bins.

No less than comic book royalty Will Eisner called Cole a “genius” and “brilliant creator” in his introduction to Plastic Man Archives Vol. 1 (DC Comics, 1998), and who am I to quibble with royalty? Plastic Man was a weird mix of superhero satire, crime comics, social commentary, and, above all, that patented Cole absurd humor. But Plas himself was never the joke. In fact, he was usually the straight man in the gag, setting up the joke for his wacky companion Woozy Winks or one of his equally absurd or crazed villains to deliver the punchline. 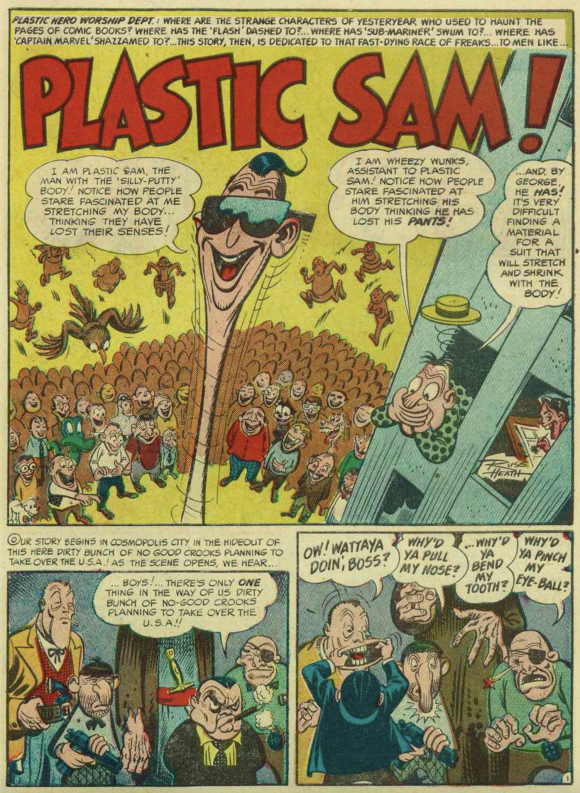 Plastic Man’s popularity was such that he was one of only two Quality Comics characters to be parodied in EC’s Mad — “Plastic Sam” in Mad #14 by Harvey Kurtzman and Russ Heath (the other was the “Black and Blue Hawks” in #5 by Kurtzman and Wally Wood) — alongside the likes of such funny book perennials as Superman, Batman, Wonder Woman, Captain Marvel and Archie.

Cole had a long and full career in comics, leaving behind a string of creations and a legacy that included being one of the artists whose work was used by Frederic Wertham in his 1954 anti-comic book tome, Seduction of the Innocent to illustrate the dreaded “injury to the eye” motif that was a frequent trope of crime and horror comics. In 1954 he went on to a second successful career as a cartoonist for men’s magazines, eventually becoming a regular in the pages of the new Playboy magazine. 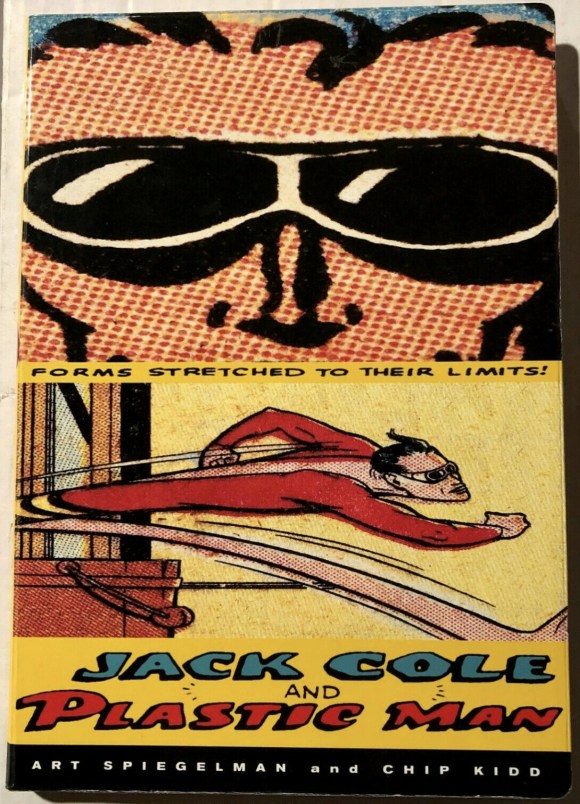 Jack Cole committed suicide in 1958 at 43 years old. To the outside observer he looked like a young man with everything to live for, his popularity growing at Playboy and in the newspapers in his newly launched newspaper strip, Betsy and Me, syndicated by the Chicago Tribune. In a suicide note he sent to Playboy publisher Hugh Hefner, Cole wrote “I cannot go on living with myself and hurting those dear to me.” For a fuller look at his life, I recommend (not to mention urge) you to seek out a copy of Jack Cole and Plastic Man by Art Spiegelman and Chip Kidd (Chronicle Books, 2001).

Which leads us to the reason I called you all together here today, MY 13 FAVORITE JACK COLE PLASTIC MAN COVERS AND SPLASH PAGES:

Police Comics #1 (Aug. 1941). Story one, page one, and just a hint of the inventiveness that was to come. And the introduction to my lexicon of the phrase, “ya putrid punks!” 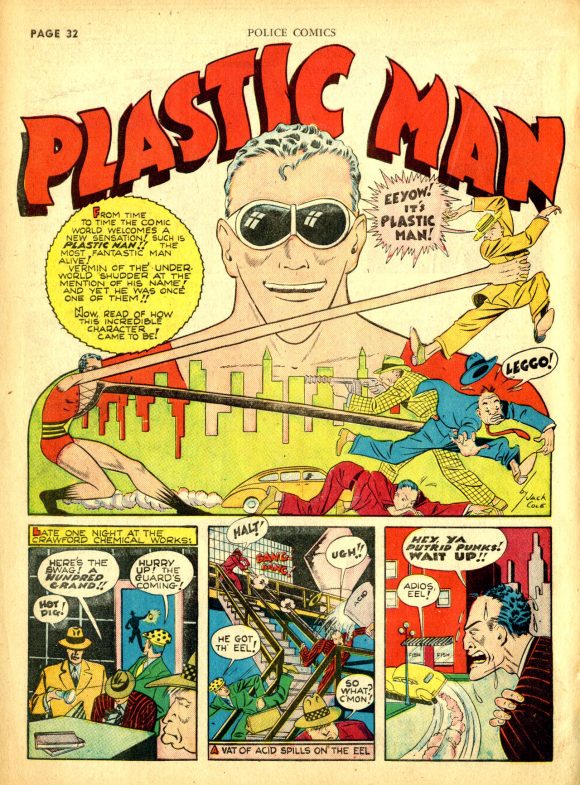 Police Comics #9 (May 1942). I love the inclusion on the splash page of the little “origin of Plastic Man” strip. Cole understood something modern comics have forgotten: Every issue could be someone’s introduction to your character. 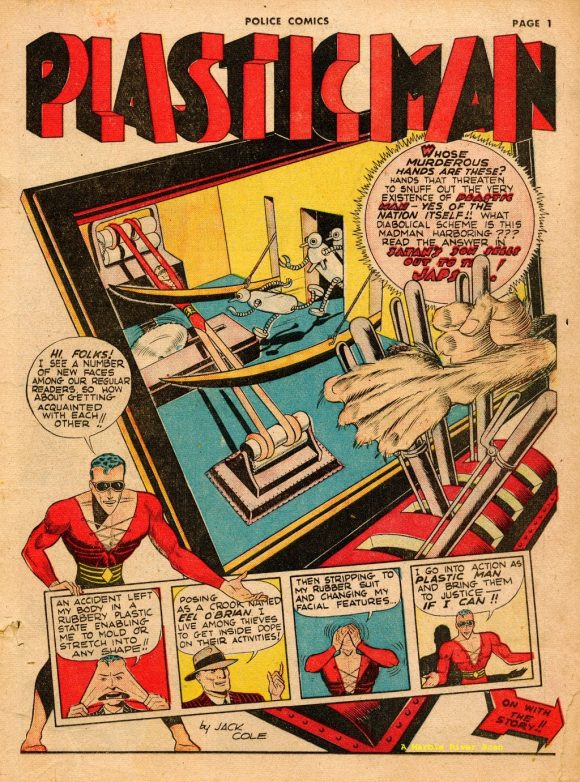 Police Comics #11 (Sept. 1942). Not only is this a kickass piece of art and splash page, but it’s followed by nine more pages of story, most of which feature 12 or 13 panels. Per page! Like his contemporaries, Cole had already been drawing jam-packed eight- and nine-panel pages, but within a year of starting Plastic Man, it looked like the artist was determined to give Will Eisner’s Spirit (reprints of whose weekly comics section shared the pages of Police with Plas) a run for its storytelling money. 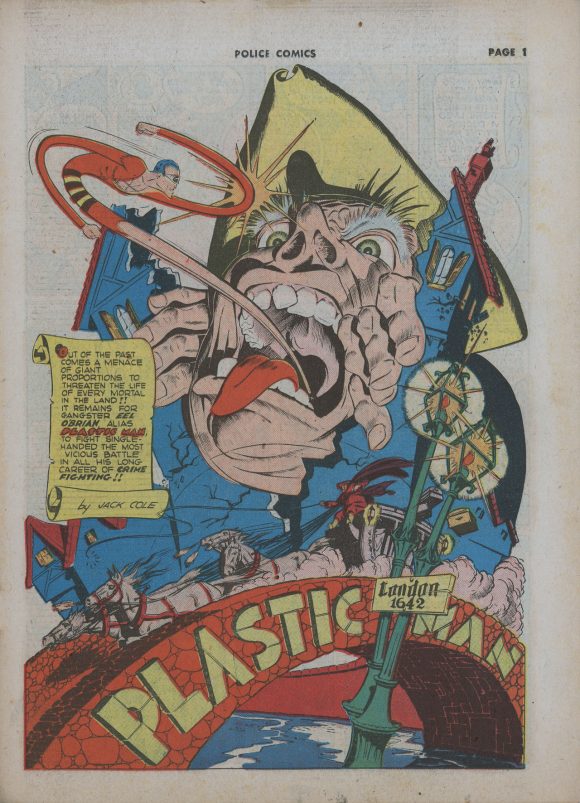 Police Comics #20 (July 1943). While Plas was featured on the covers of a lot of issues of Police, none of them were drawn by Cole until #17. 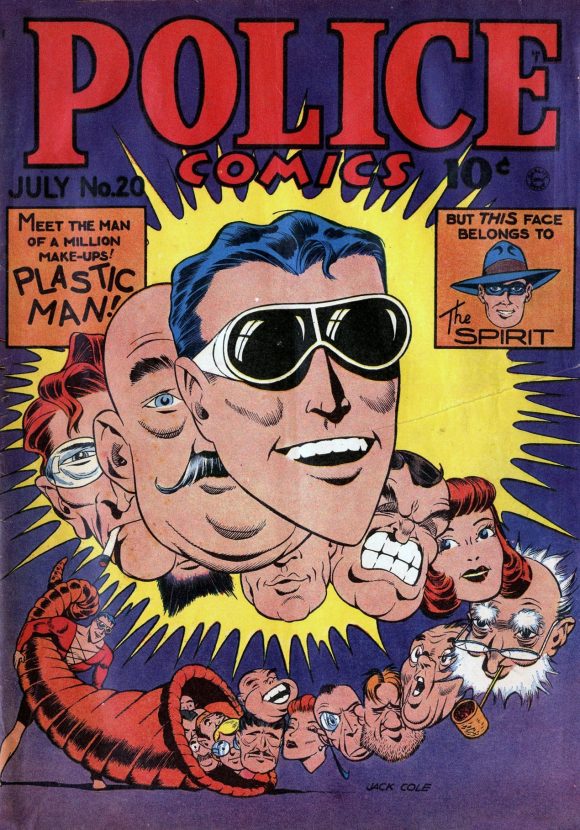 Plastic Man #1 (Summer 1943). Quality added a dedicated Plastic Man title to the schedule, more than doubling the number of stories a year. Think that Cole was stretching it? Check out the splash to “Go West, Young Man!” Also check out how well Cole set up a gag: Before you can finish the thought, “But Plas should be a red cactus,” you see the bucket of green paint and the brush in Woozy’s hand, and the gag is sold. 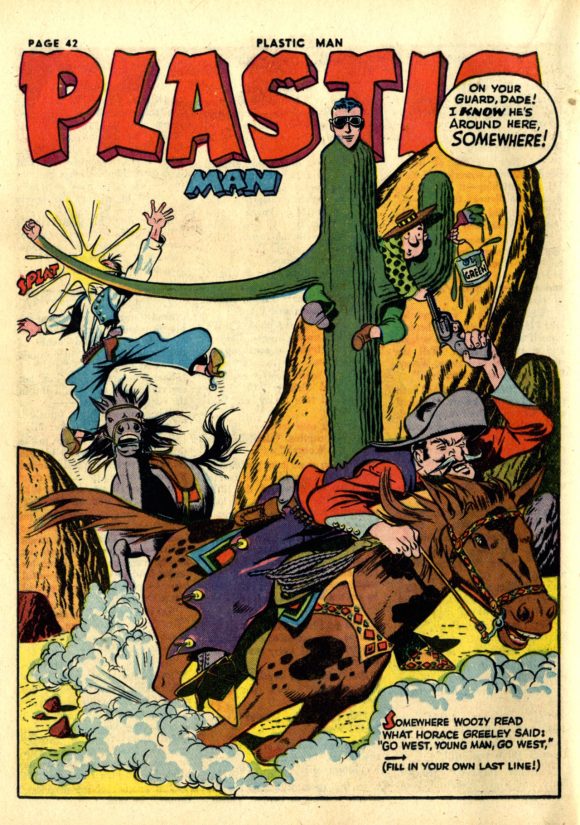 Police Comics #24 (November 1943). You can never have enough Plastic Mans. 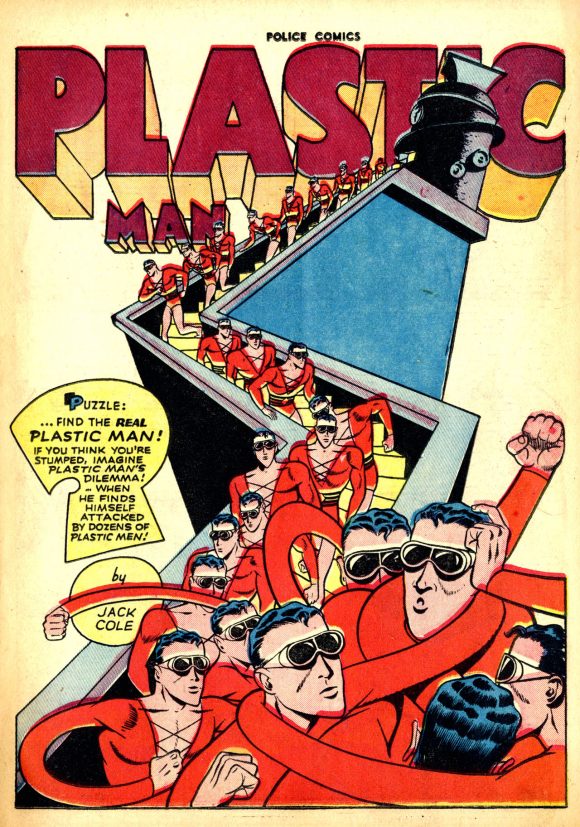 Plastic Man #2 (August 1944). It took me a while to pick up on the gag behind this cover, which would have knocked them dead in an 1890s photography salon. 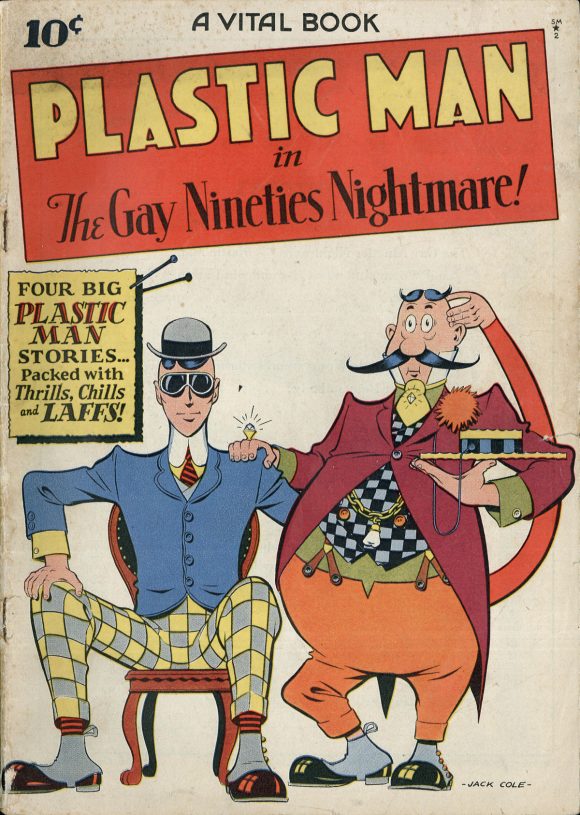 Plastic Man #2 (August 1944). A Kurtzmanesque splash and a cool crazy quilt treatment of the logo. 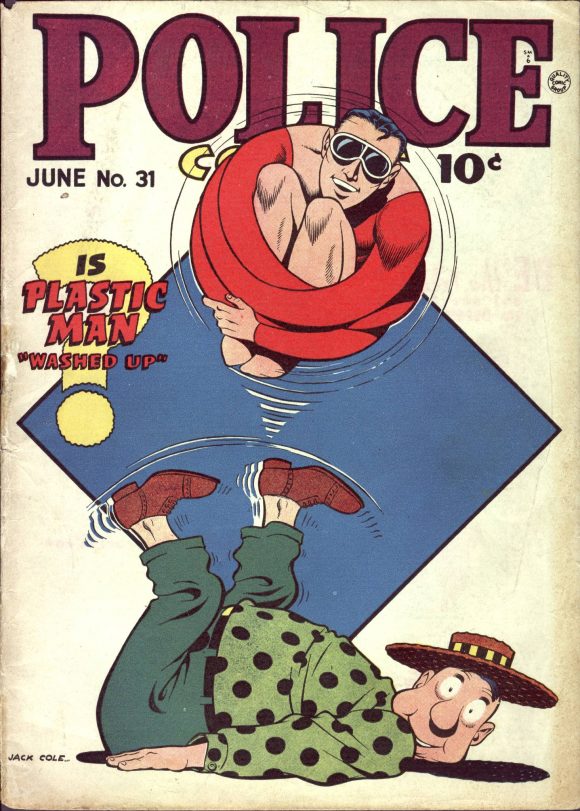 Police Comics #54 (May 1946). One could only stretch the stretching visuals so far, but plastic has many uses. Plus, butt-eraser gags are always funny.