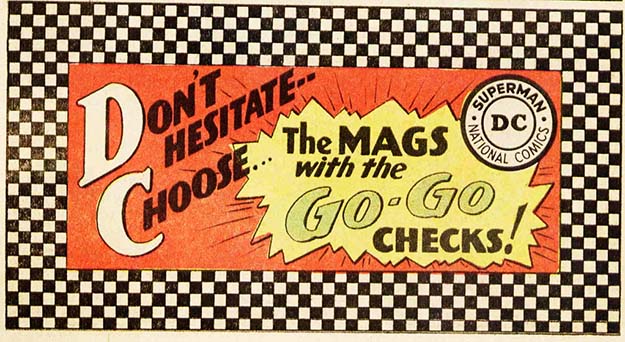 I never actually met letterer Ira Schnapp (October 10, 1894 – July 24, 1969), but I did have the pleasure of once standing over his shoulder with half a dozen other wide-eyed fans in DC’s production department during a tour of the publishers’ offices in late 1967/early 1968 and watch him work for a few minutes. I don’t remember exactly what he was doing, though I’m fairly certain it was the display lettering for, appropriately enough, a house ad.

I had no idea who Ira Schnapp was at the time. I had no idea of the names, or frankly, even the existence of the below-the-line talents whose names didn’t appear in the credit boxes. Fox, Infantino, Schwartz, sure. But DC’s letterers and colorists, not to mention the production artists, were an unknown quantity.

The Austrian-born Schnapp had forged a respectable career for himself prior to his time at what was then National Periodical Publications. He had worked in a variety of fields, including film title designs (i.e., the dialogue cards in silent movies), theater display cards (including for the 1933 premiere of King Kong at Radio City Music Hall), advertising, pulp magazine logos, and architecture. He was famously part of the design team for the architectural firm of McKim, Mead and White, designers of New York’s James A. Farley Post Office Building, who worked on transferring the lettering for the inscription (“Neither snow nor rain nor gloom of night…”) that runs across the front of the building. 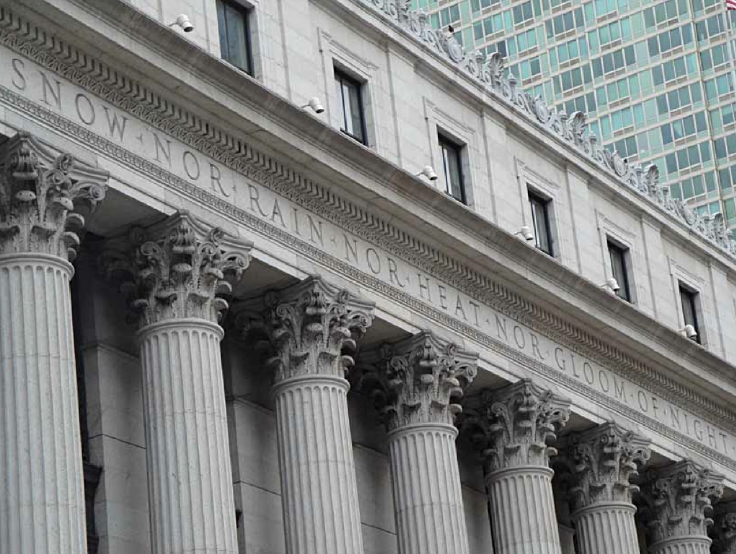 Jack Liebowitz didn’t have to go far for references when he hired Ira Schnapp in 1940 to rework and bring consistency to the logo of the company’s hit character, Superman; the two were related by marriage. Schnapp’s redesign, based on Joe Shuster’s design, first appeared on Superman #6, and remained in use until 1983. Schnapp freelanced as a letterer and logo designer until 1949, when he accepted a staff position with duties that included everything from logos to lettering covers, ads and stories.

While I may not have known who was behind all those ads in the DC Comics of the 1960s that made me spend my dimes and quarters, there was nothing like a Schnapp. His way of delineating a simple “the” was a sure indication of the mystery artist at work, as distinctive as Carmine Infantino’s pincher-fingered hands or Gil Kane’s nostrils.

Because of the use of Schnapp’s trademark style “the” I had long believed that this piece of art I own was Schnapp’s original, from the cover of Showcase #34 (1961), but closer examination shows it be the logo that appeared on the splash page of “The Birth of the Atom,” which is credited to Gaspar Saladino. Did Schnapp create more than one variation on his theme, or did Gaspar do his own version, in the style of Schnapp?

I became conscious of Schnapp’s work on DC’s house ads near the end of his illustrious career, those last few years before his retirement. When I began researching this column, I was so overwhelmed by the sheer volume of his output from 1940 on that I would have to restrict myself to those years of his main influence on me, 1965 to 1968, if I ever hoped to whittle the list down to 13.

Tough as it was to narrow down the final 13 from even those few years, these are ads that I have vivid memories of first coming across in the course of my daily comic book reading, even if some of them were for love comics.

Here then, on the 127th anniversary of his birth, let it be writ in letters large, MY 13 FAVORITE DC HOUSE ADS LETTERED BY IRA SCHNAPP, in no particular order: 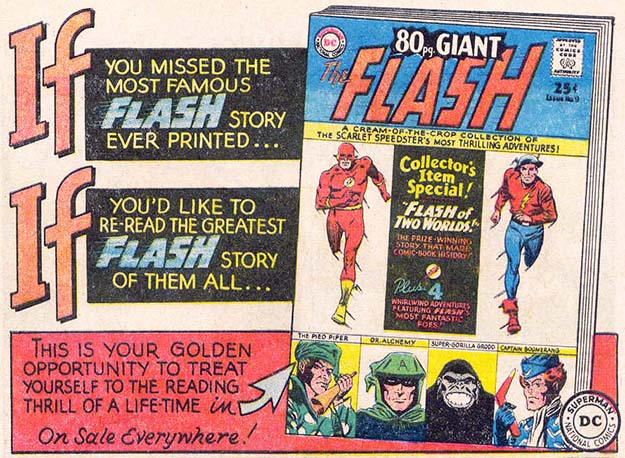 “If”? I had, DC Comics… I had missed that story, whatever it was! From April 1965, this simple but effective half-page ad led me to seek out this 80-Page Giant “cream of the crop collection” of stories, including one that was literally life-changing for me, “The Flash of Two Worlds.” Yes, it was a great story, reviving the Golden Age Jay Garrick Flash and igniting the Multiverse.

By the time I read this story, I was already aware of Earth-One/Earth-Two from at least one JLA/JSA crossover event and a couple of cameos by their Golden Age versions in Green Lantern and The Atom. But until I read that annual, I hadn’t known that the first contact between the two Flashes took place on my birthday (according to the date shown on the Keystone Gazette front page the Flash looks at). I was hooked! Thanks for making me notice, Mr. S! 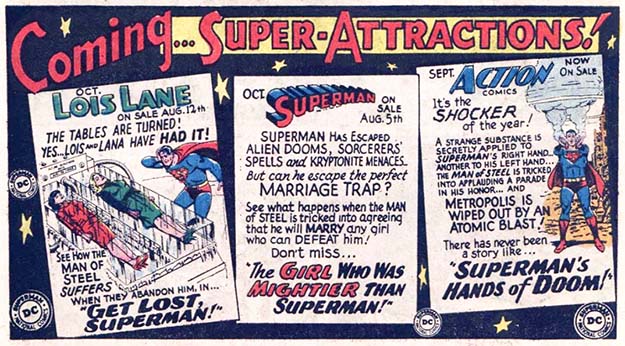 Don’t ask me why, maybe because I was 9, 10 years old and Mort Weisinger was a genius, but his third-page “Coming… Super-Attractions!” ads each featuring three different Superman Family titles are forever imprinted in my brain and my heart. I loved these dense little nuggets of information, like these from late 1965. Could a lesser letterer than Ira Schnapp have made all that copy work so beautifully in so cramped a space? 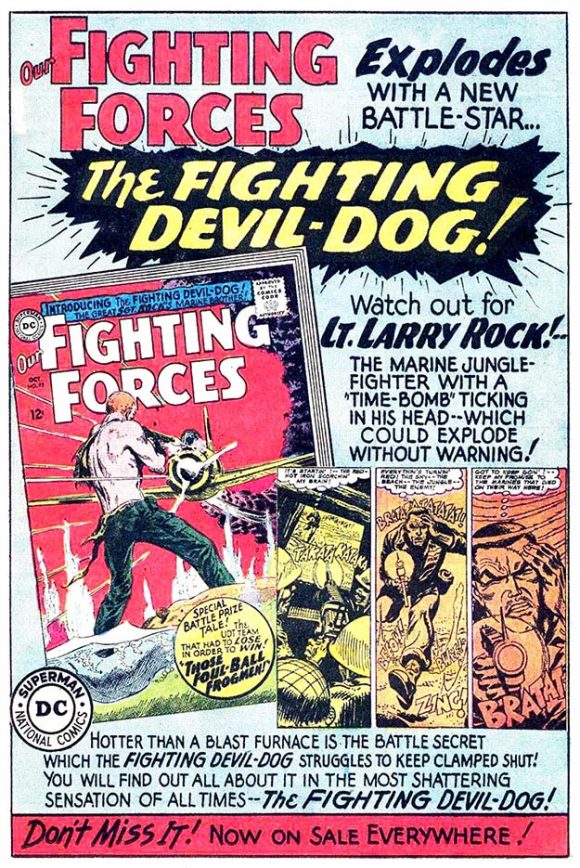 Another fine example of Schnapp’s superpower at work, the ability to fit the equivalent of a short story in a limited space shared with graphics. I wouldn’t get into the war titles until a few years later when I started acquiring them from the 10- and 25-cent bin, but this 1965 house ad stuck with me, partly because it’s a great big shouty war comic ad probably written by Bob Kanigher and excitedly designed by Schnapp, and partly because the hero’s name is Larry. Larry? What kind of name is Larry for a war hero? His brother Frank knows what I mean. 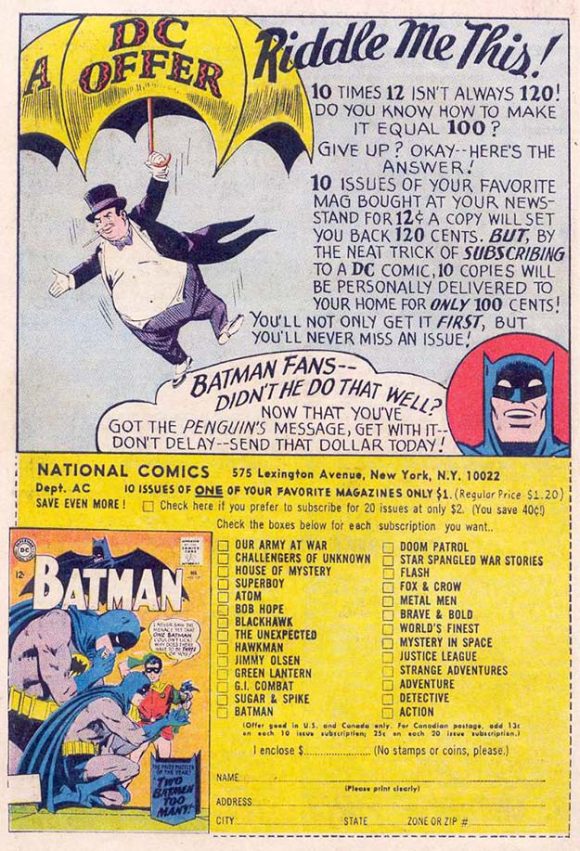 From clip art to subdued lettering, this 1965 Ira Schnapp subscription ad comes across as retro, even for the era, but it got me to send in my buck. (One year of Action Comics, but I didn’t renew because the mags came folded. In a plain brown wrapper. Honest. 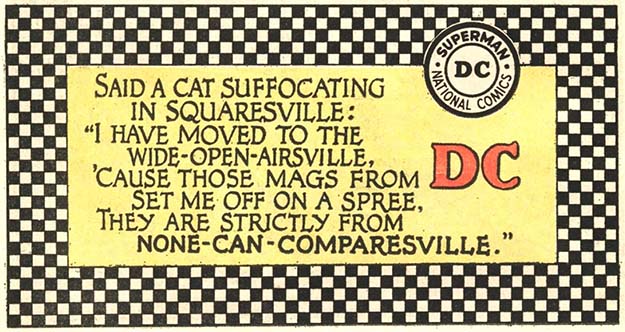 What were they thinking? Well, it actually made a bit of poorly designed sense. Spinner racks and newsstands maximized shelf space by stacking titles, so they overlapped and hid two-thirds of the cover of the magazine behind them, leaving mostly the logo visible. The idea was to make DC’s titles stand out under those crowded conditions with a distinctive design element. They even ran a series of Schnapp-lettered ads, like these from 1966, to promote the idea, which lasted just over a year and a half. Readers decided Go-Go Checks were, like, from Squaresville, man.

DC was pushing its teen humor titles in the mid-1960s, especially Barbara Friedlander, Jack Miller and Joe Orlando’s Swing With Scooter, which had a six-year run beginning in 1966. The comic, about a British rock star (modeled on Paul McCartney, according to Ms. Friedlander) who comes to America to escape fame and live a normal life, apparently had legs and was rewarded with several ads lettered by that other swingin’ star, Ira Schnapp. 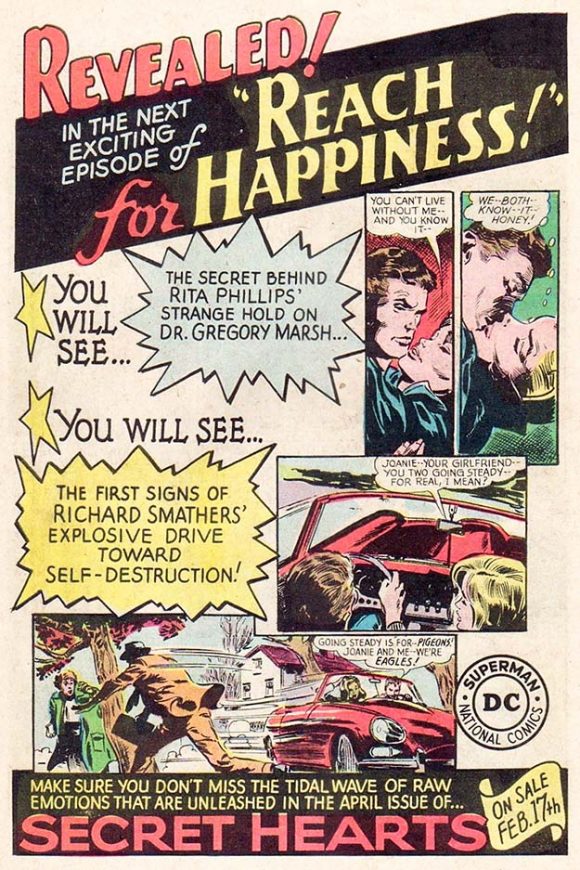 In 1966, DC tried to juice up several of their romance comics with ongoing, multi-issue soap opera stories, like Jack Miller and Gene Colan’s “Reach for Happiness”… lettered by Schnapp, who also put together this exciting ad. 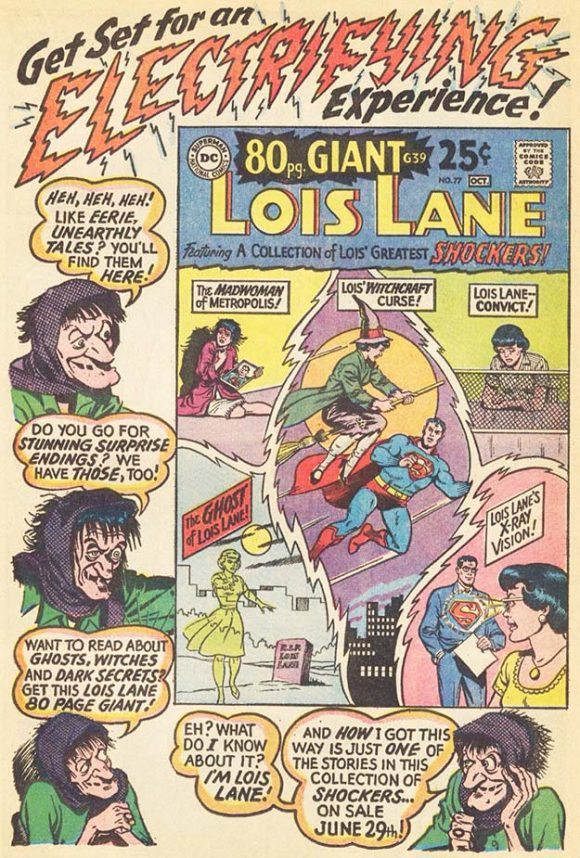 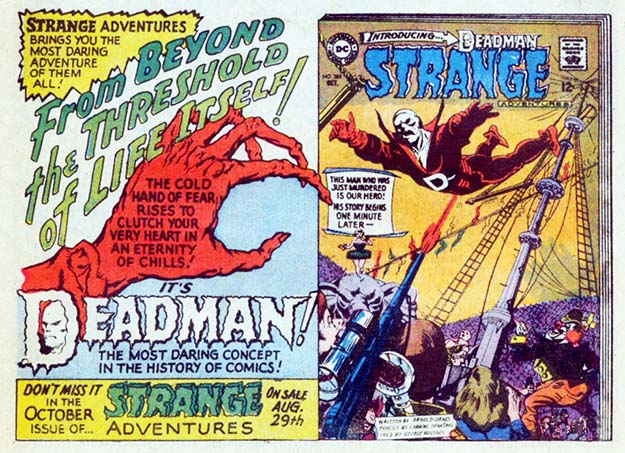 What made this ad irresistible and unforgettable? Was it the cover? The grasping hand? The stylized logo? Schnapp’s lettering? All of the above. 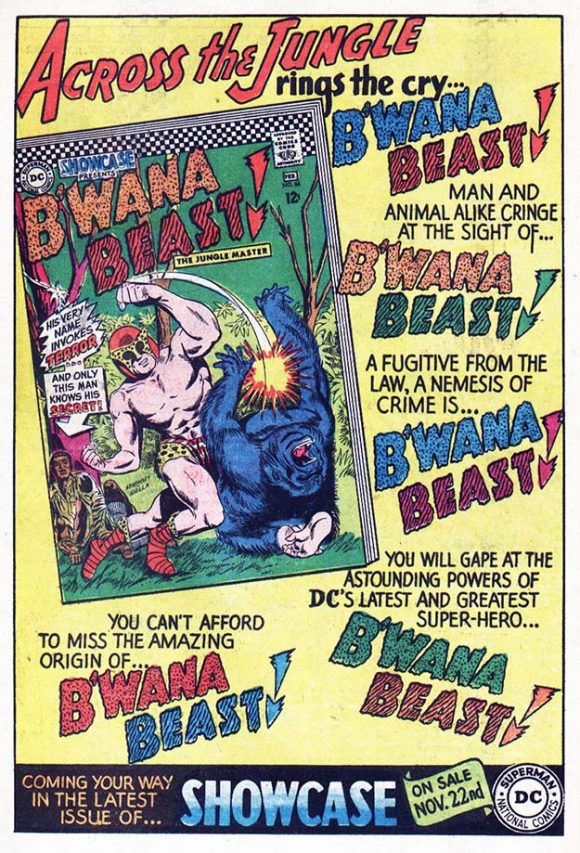 Yes, I know it’s a bad concept so poorly executed that no one has ever claimed the credit for writing the first of B’Wana Beast’s two 1967 Showcase appearances. Schnapp’s house ad actually makes it look sort of interesting. Or maybe it’s just the DC Purple Gorilla® getting punched out by the guy in a bug hat. 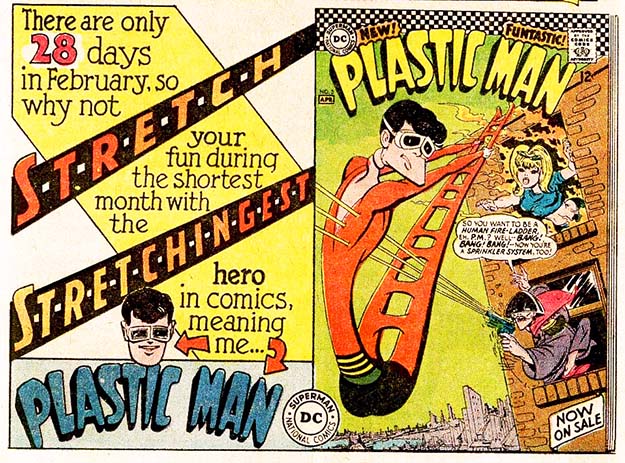 My opinion? After creator Jack Cole, no one has ever gotten Plastic Man right, including me the couple of times he passed through my typewriter. But I was too young to know that in 1966 when this, the absolute rock bottom worst of any Plastic Man revival appeared, or maybe it just proved that Plas is too good a character for anyone to ever totally screw up. In any case, it looked like Schnapp got into the spirit of things with his s-t-r-e-c-h-e-d out lettering. Without doubt, one of my Top 10 (13?) favorite single issues of a comic book from the 1960s. It’s got a fun, hammy script by Bob Haney, exquisite art by Nick Cardy (he told me he drew it as his last “screw you” job for DC so they would see what they were losing after he was refused a modest page rate raise; seeing the work, Carmine Infantino got Cardy his raise), and one of the best coloring jobs of the decade by a colorist unidentified. And not only did Schnapp design and letter this memorable ad, but he also lettered the cover.