OVERSTREET’S BATMAN GUIDE: What It Is and How It Came to Be

Home » ACTION FIGURES & MERCH » OVERSTREET’S BATMAN GUIDE: What It Is and How It Came to Be

One of the coolest books about Batman I’ve seen in some time is the Overstreet Price Guide to Batman, the just-released paperback from Gemstone Publishing.

The book is more than a simple price guide. Sure, there are plenty of helpful listings, but it’s jam-packed with dozens of articles and hundreds of colorful photos and illustrations encompassing 80 years of Batman history.

Just check out the table of contents (accompanied by the cover): 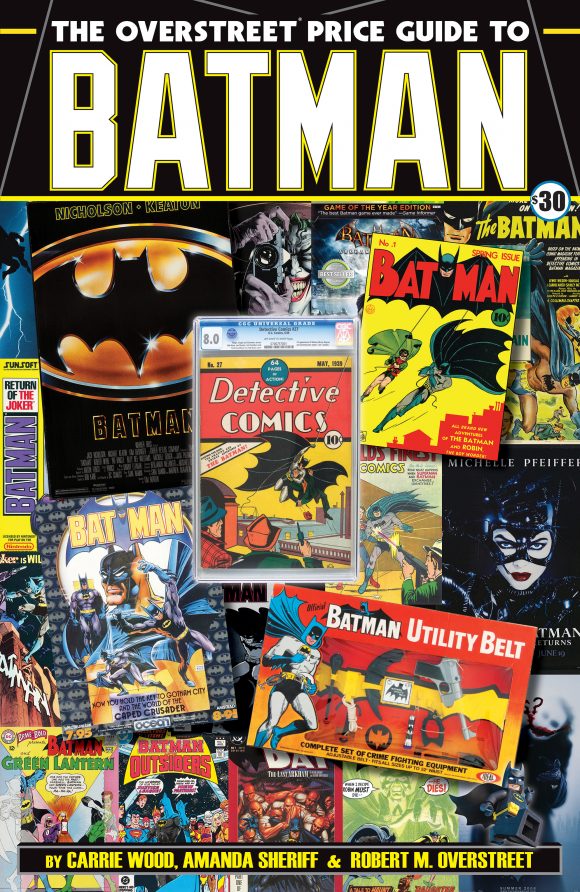 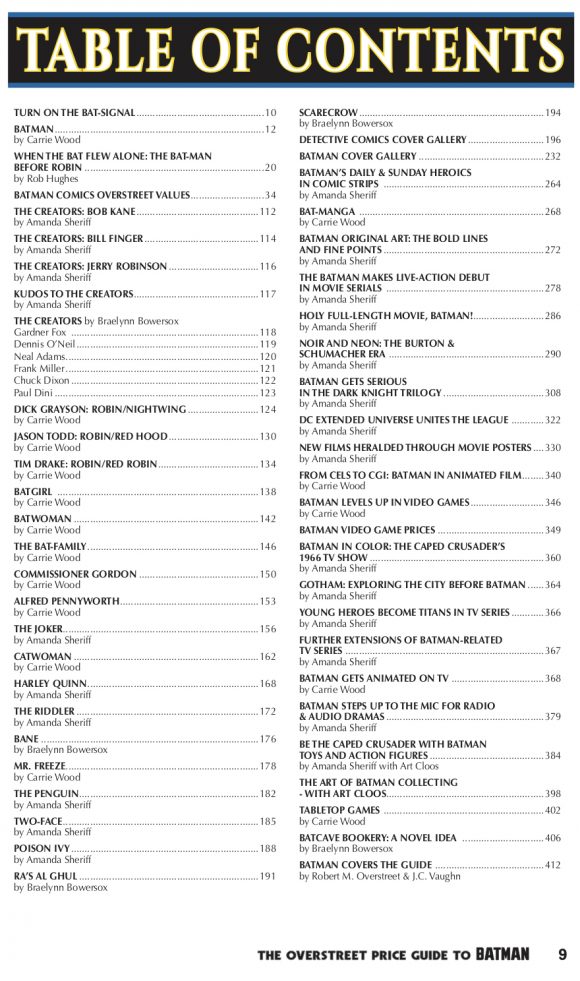 We’ve featured the book here at 13th Dimension a couple times already – and we’ve got more to come – but I wanted to pause to give you a real INSIDE LOOK at what this publication is all about and what went into producing it.

So dig this interview with two of the editors, Amanda Sheriff and Carrie Wood, who also wrote the lion’s share of the book’s articles.

Oh, and if you haven’t seen the book yet, I’ve included a number of spreads so you can get a real feel for just what a terrific publication this is: 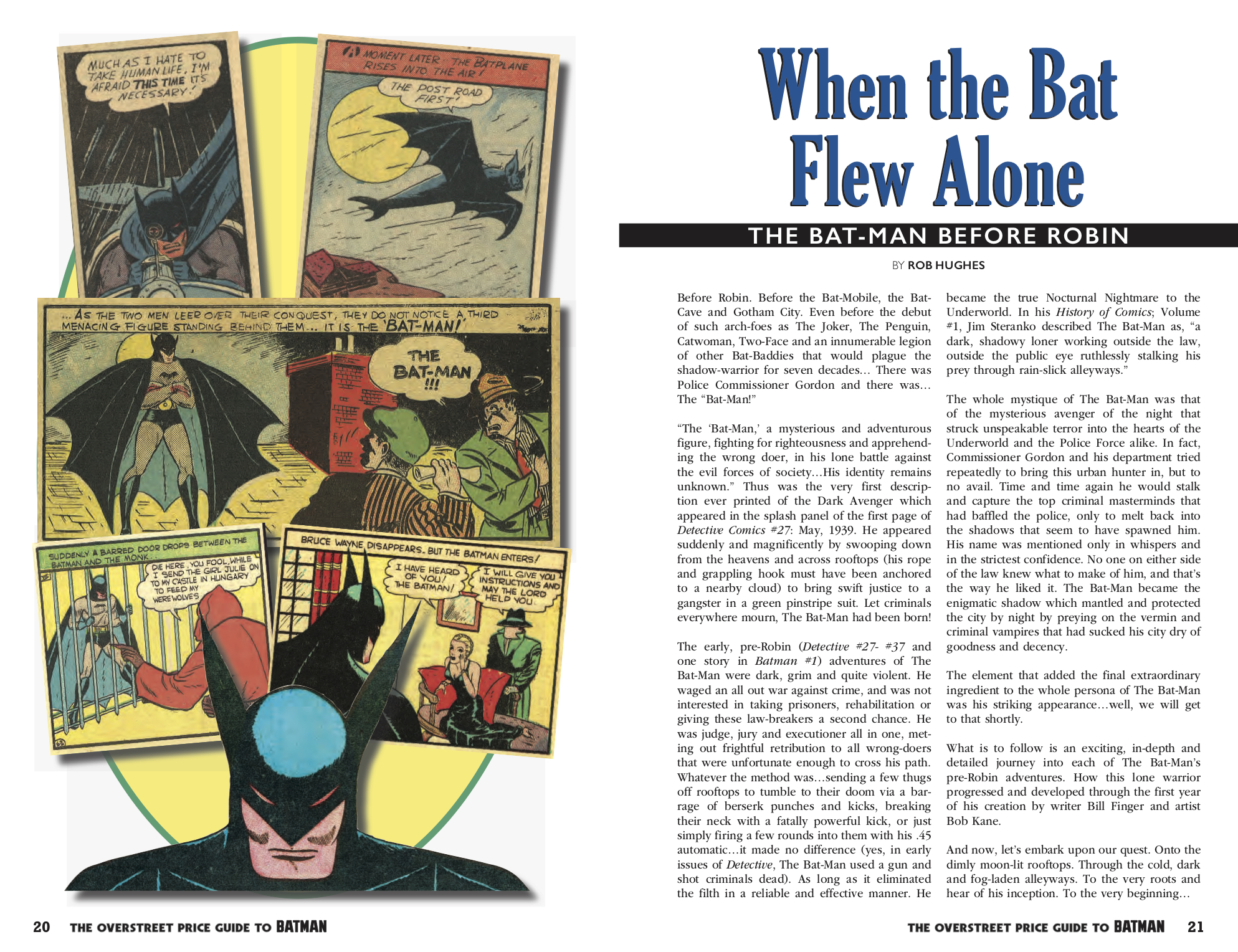 Amanda Sheriff: We’ve been exploring different types of collectibles in our “guide to collecting” books, such as original art, concert posters, and tabletop games. Then our Overstreet Price Guide to Star Wars Collectibles combined aspects of our flagship Overstreet Comic Book Price Guide with this new line, by providing lots of pricing and more articles focused on historical context. With Batman’s 80th birthday coming up, our Vice-President of Publishing, J.C. Vaughn, recognized that it was the perfect time for a deep dive into the Batcave. It didn’t take much, actually any, convincing to get the whole team on board.

Carrie Wood: As far as these character-focused books are concerned, we decided to do Batman first simply because of 2019 being his milestone 80th anniversary year. Plenty of other characters had been discussed, and we hope to have the opportunity for more books in this style – but for the sake of being able to tie into such a moment in Batman’s history, we wanted to make sure he was the first. 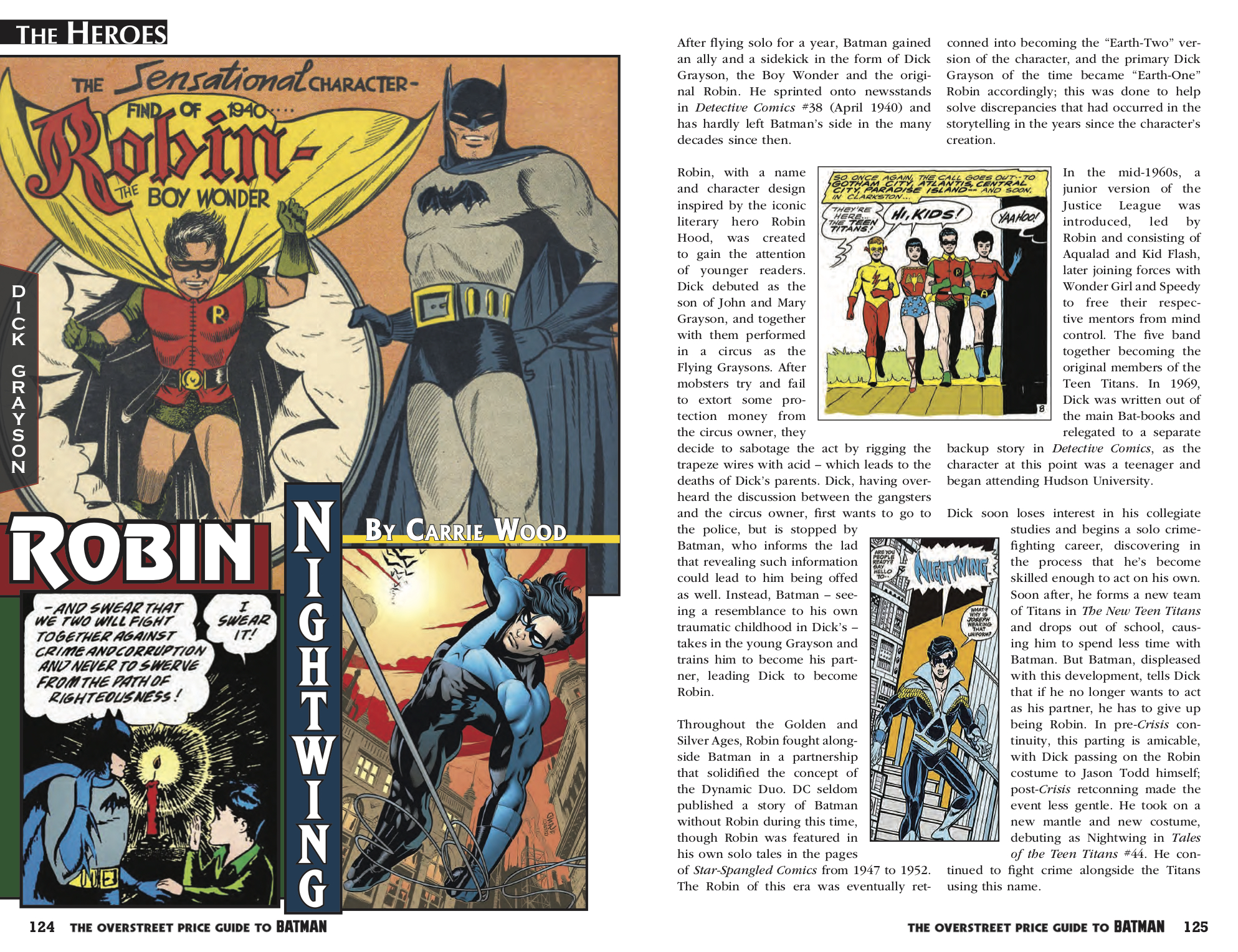 Dan: How did you determine the chapters you wanted to include?

Amanda: With Batman it begins with the comics, which meant full pricing and detailed articles about the main characters — both good and bad — as well as the complexities of original art. Toys was another that needed to be in there, given the volume of high-value toys in the market. From there, we wanted to include a solid variety with movie memorabilia, video and tabletop games, novels, audio dramas, and more.

Carrie: The goal on the collectibles end was making sure that every kind of Batman collector would still be able to learn something new. There’s plenty of folks out there who stick to comics who now might learn something about video games, or people who specialize in Bat-toys who now might get some new information about manga or original art. In addition to that, we wanted to make sure that we were providing the kind of historical context regarding why these items are so collectible — there’s no such thing as a million-dollar comic book without that context, so that was important to us as well. 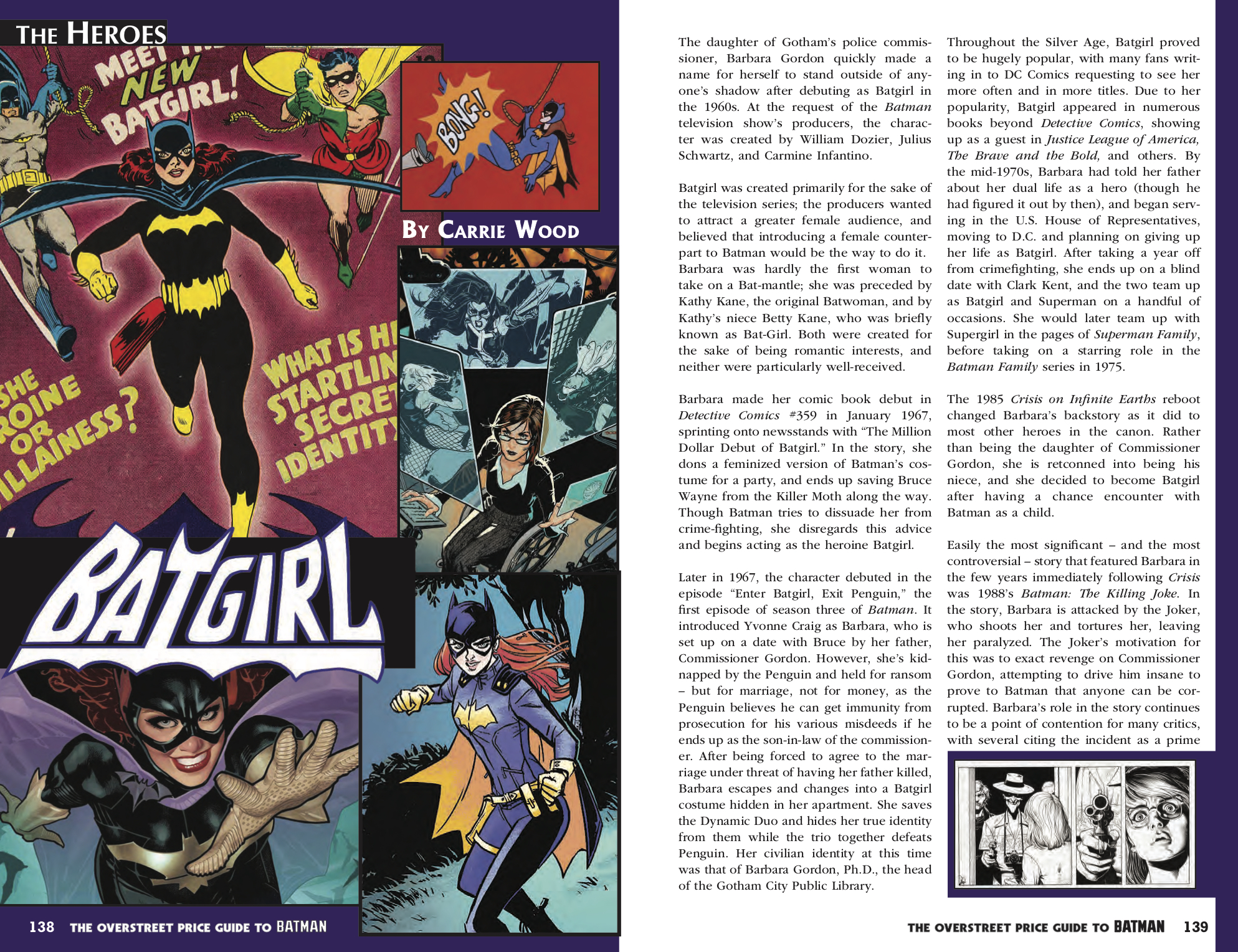 Dan: You both have a number of articles in the book. How did you decide who did what?

Carrie: Honestly, that was just us playing to our strengths. Amanda’s already a poster collector, while I’m the big gamer on staff. It broke down really easily once we determined that we could just stick to what we already knew and build out from there.

Amanda: I was excited to write about the villains, and Carrie was amenable to that. It made sense for us to split the live-action and animated projects based on our tastes. The same goes for topics like vintage toys and manga. 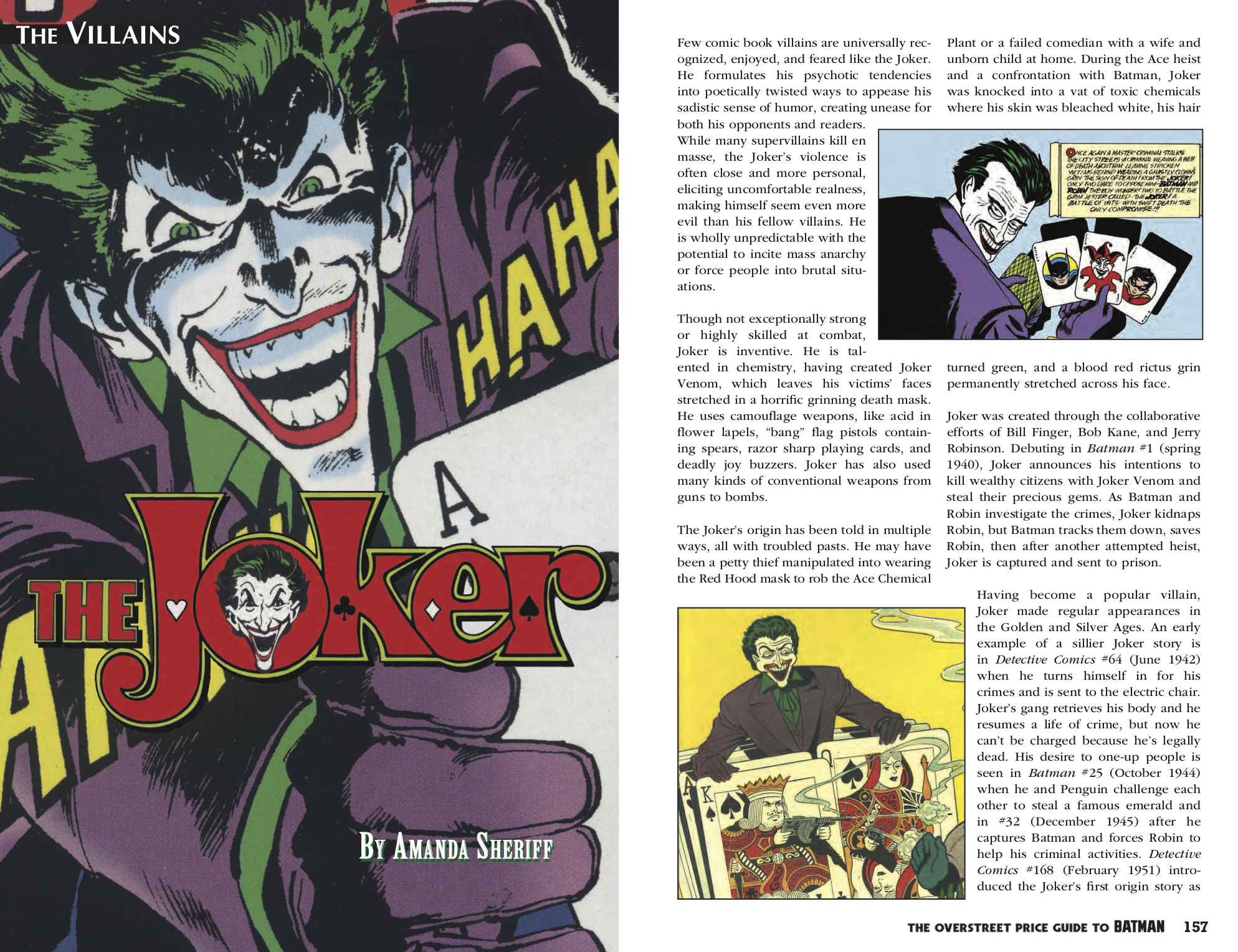 Dan: What resources did you use to determine the prices?

Amanda: We did hundreds of hours of research by digging into auction records to compile the most accurate and up to date prices. We used many auction houses and other reputable sources that provide completed prices and condition assessments to generate the values. 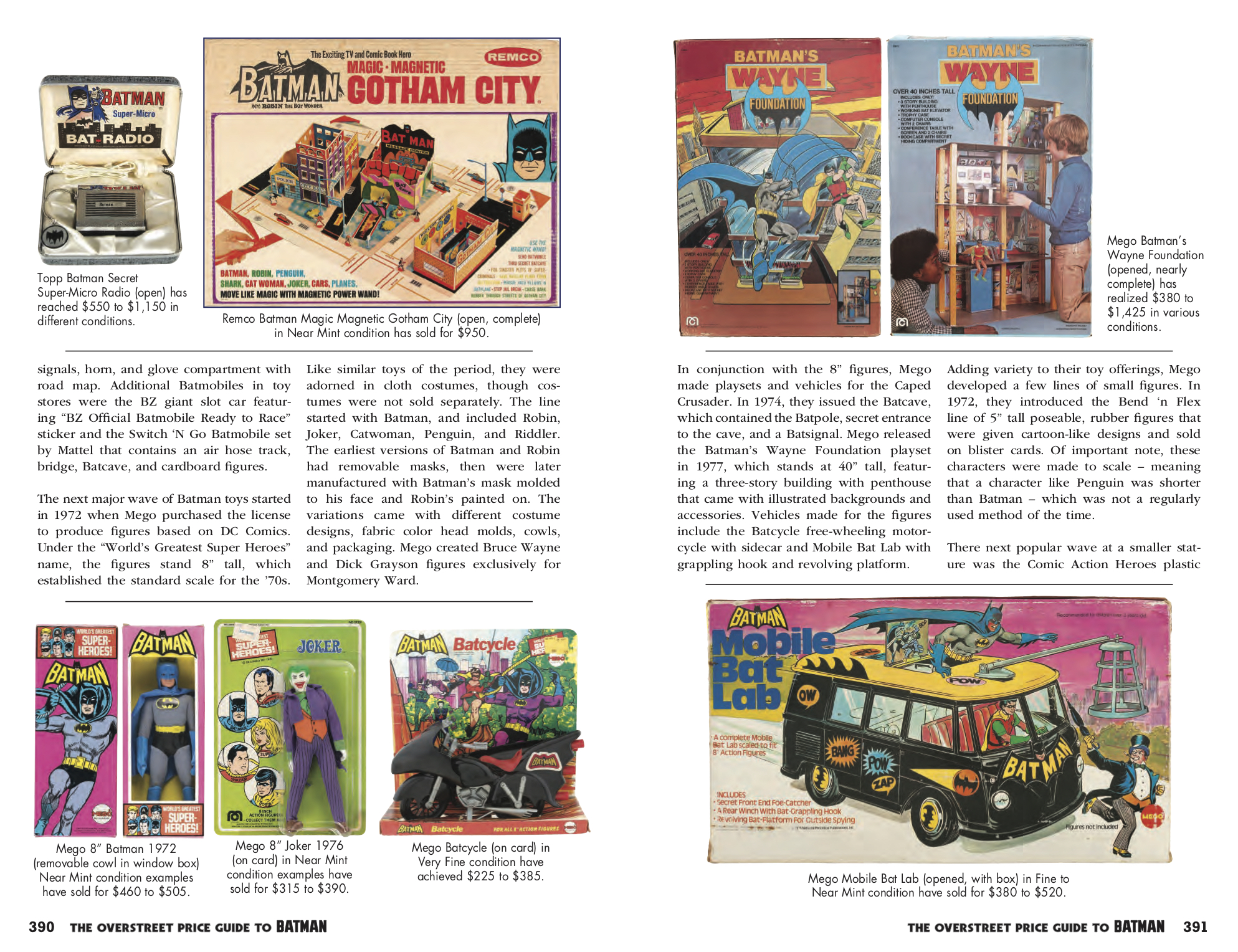 Dan: How did each of you get into Batman to begin with?

Carrie: I grew up in the 1990s, so I really got into it via Batman: The Animated Series on Saturday mornings. My dad had read a lot of DC comics when he was a kid in the ’50s and ’60s, and he introduced me to the Adam West iteration of Batman. It just kind of grew from there!

Amanda: Michael Keaton and Tim Burton introduced me to Batman. As a kid, the movie was fun and flashy — even if most of it was over my head. Then as I got older, I began to deeply appreciate Batman because he has no superpowers, which makes him even more heroic, he has the best villains in comics, and Batman can be light like the ’66 show or darker like The Killing Joke. 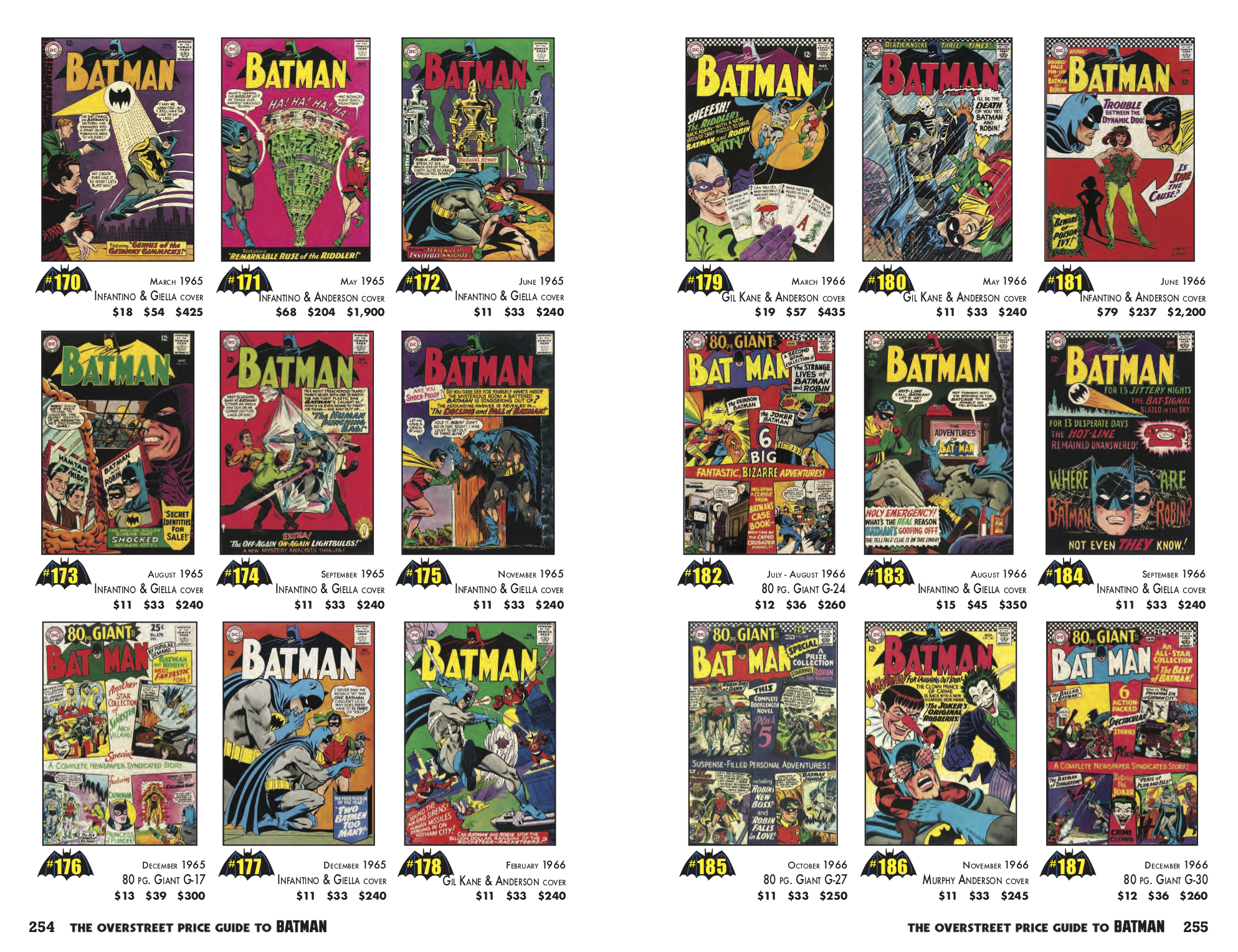 Carrie: It’s not worth, but my favorite is a box of Batman cereal from 1989. It’s still in the shrinkwrap and still has the bank with it. My parents bought a handful of pop culture items in 1989 because they wanted to have a bunch of things from the year I was born, and that happened to be one of them. I’ve given consideration to opening the box and seeing what the cereal tastes like, but after 30 years, that might not be the healthiest idea. I also have an Adam West autograph that my friend Tom procured for me at a convention several years back. Amanda: I have a few original one-sheets from the movies, an Adam West autographed photo, and because I’m a diehard Pittsburgh Steelers fan, I have the Hines Ward Gotham Rogues action figure from The Dark Knight Rises.

Carrie: I’d really like to get my hands on complete-in-box copies of some of the early Batman video games, especially the Ocean Software titles. I just think the box art for those games is so cool and unlike really anything we’ve seen on any other Bat-merch since. 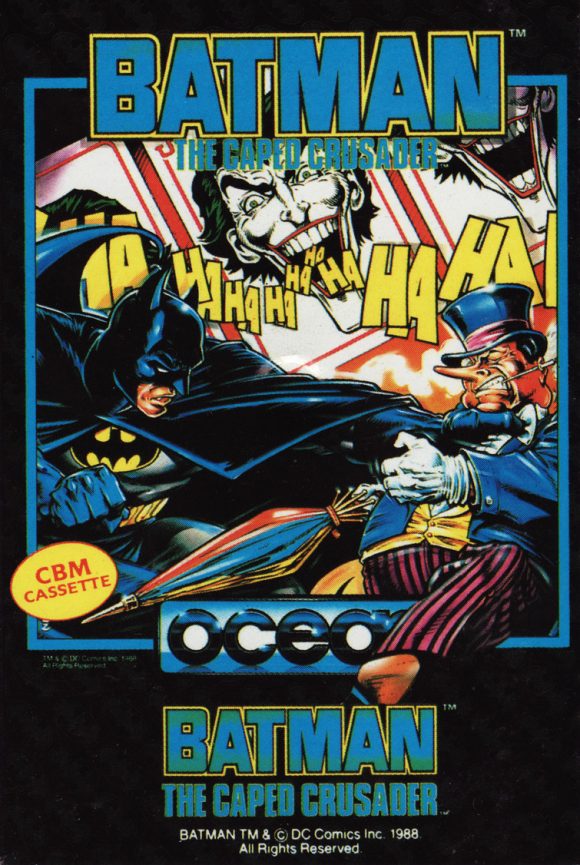 Amanda: There’s so much! I think the top of my list would be a Michael Keaton or Michelle Pfeiffer autograph and the Cobblepot for Mayor poster from Batman Returns. I really like the Ideal utility belt too, but that’s a bit out of my price range.

Carrie: As far as the comics are concerned, I probably have to go with A Death in the Family. Jason Todd is my favorite Robin and though this story killed him off — and ostensibly, really did him dirty with that 900 number! — the ramifications of what happened in this tale rippled throughout Batman’s stories for years after. Jason’s death at the hands of the Joker resulted in readers getting to see a far more emotional side to Bruce than had otherwise been seen before. I think the writing really holds up and it’s an often-referenced comic for a good reason.

Amanda: I’d have to go with The Killing Joke. It shows just how terrifying and sadistic the Joker is, which pushes Batman to be more honorable when few would blame him if he decided to kill the Joker. It’s very well written and beautifully illustrated. I’m a horror fan too, so I dug the tone. On a much lighter note, I recently read Detective Comics #567 which is an entire issue of Batman trying to help people who don’t need help. It’s a funny break from the more serious stuff. Dan: What in the book did you want to address but just couldn’t?

Amanda: We covered a really wide variety of memorabilia that we are confident will appeal to any Batman fan. We didn’t get into trading cards and some topics could have been explored deeper. Batman has 80 years of history and collectibles, so it’s not surprising how fast 416 pages fill up.

Carrie: We could have easily filled 400-plus pages each on every era of Batman — Golden, Silver, et cetera — as far as collectibles are concerned. There really is just so, so much out there. Dan: What was the most surprising thing you found while researching the book?

Amanda: I can’t say that I was particularly surprised by any of the values we found because I report on auction results every week in Gemstone’s e-newsletter, Scoop. When I get into research for our books I’m always impressed by the amount of detail and ingenuity creators use when developing characters and stories. Learning about what went into creating Batman and other characters or the movies is so interesting. There’s a reason this character is still popular 80 years later and why fans are passionate about collecting his comics, toys and other memorabilia.

Carrie: Yeah, I think both Amanda and I have been working on this kind of content long enough at this point that not much really surprises us any more on the values end of things. The only thing that came up that I was even remotely taken aback by is the fact that Batman had a few times where DC almost ceased publishing his books entirely due to a lack of popularity and sales -– just given how saturated the character is in pop culture today, it’s hard to imagine that ever having been the case!

The Overstreet Price Guide to Batman is 416 pages and is published by Gemstone Publishing. It’s now available at comics shops and booksellers. The book, which lists for $30, can also be ordered directly through Gemstone. (Click here.)

MORE on the OVERSTREET PRICE GUIDE TO BATMAN