EXCLUSIVE: It’s the Joker and Catwoman’s 80th anniversaries — and the master artist takes you behind the scenes…

Put together, the two cover images form a dramatic diptych: 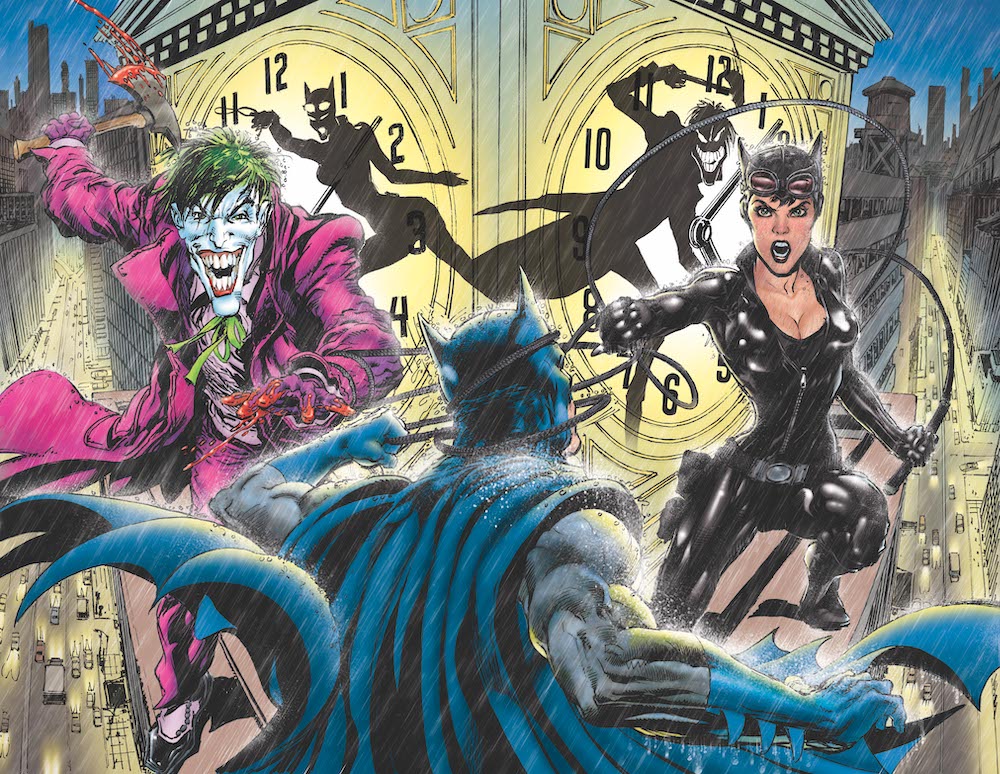 Anyway, as promised, here’s Adams himself on how he put this together — and just who it was who inspired his version of Catwoman — along with an EXCLUSIVE look at the pencil roughs and inks.

Dan Greenfield: How did the concept come about? How did you come with the idea of it?

Neal Adams: Well, I’ve been thinking about this concept for a long, long time. The idea has always been, if you do (connected) covers, the characters are just standing there with stuff going on in the background. That’s cool. You do maybe four covers wide, you have four people, one on each cover and then you have kind of integrated backgrounds. And it’s always bothered me that that’s all it is. You know, like there’s no real integration, it’s not like one picture. And I’ve thought about it for a while, and I thought it would be great if you could do one picture on one side and one picture on the other side, but when you put them together, they become another picture. OK, so in this case, I’m using the back of Batman as the integrating part, so they’re both attacking him. And you see on both covers, if you have them separate, that they’re attacking somebody, could be Batman. But when you put them together, it becomes really clear that it is Batman. So you actually integrate the covers. 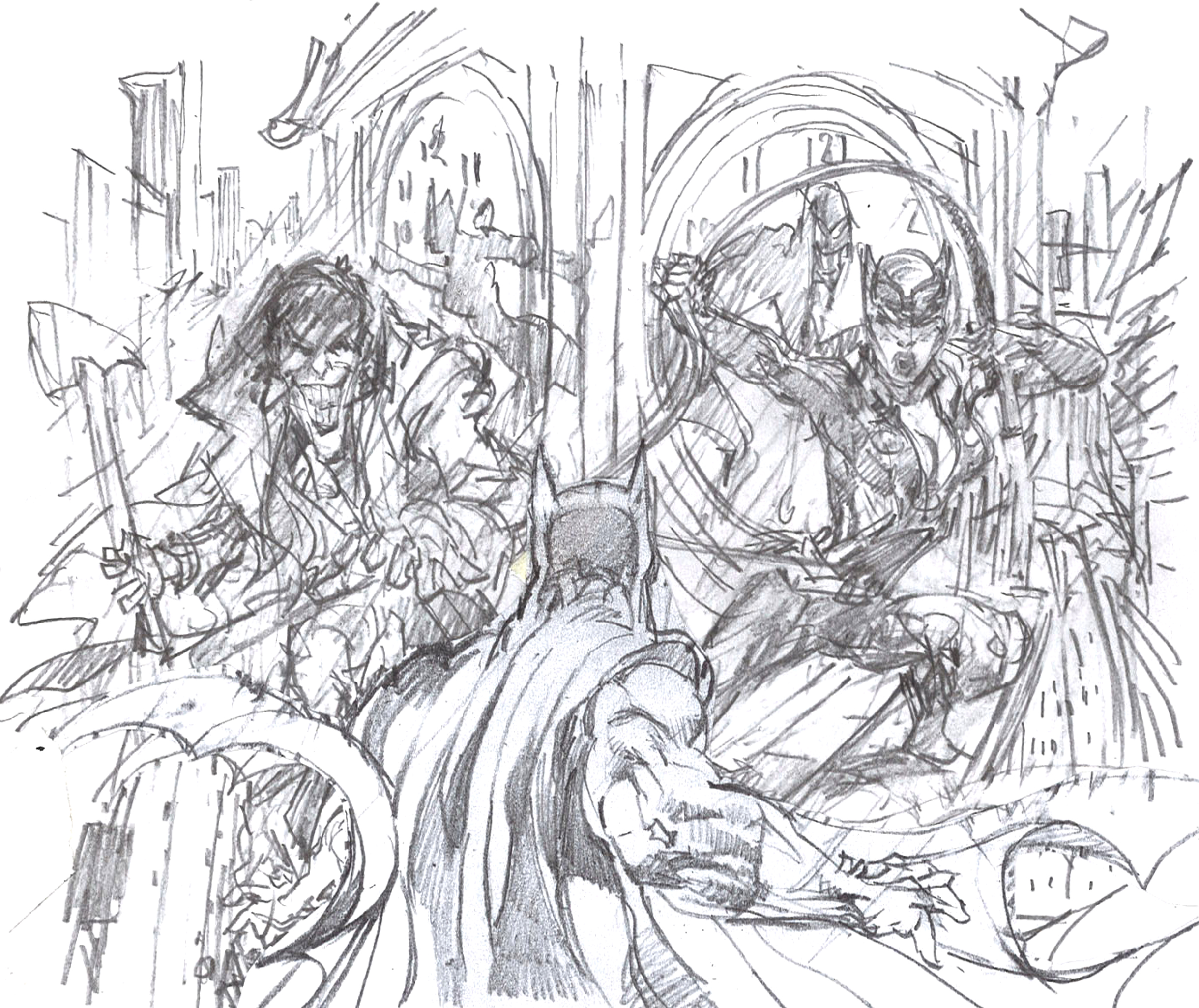 Dan: The first time I saw it, I was particularly taken with — besides everything you just mentioned — the idea of the dueling shadows behind them. So that if you only have the Catwoman issue, you’ve got the Joker in the background. And if you only have the Joker, you’ve got Catwoman in the back. Now that concept, which I really think makes the whole thing pop, how did that come about?

Neal: You do want to imply what’s going to be on the other cover without saying what’s going to be on the other cover. If you’re dealing with lighting, pretty much you’re free to light anything the way you want. So you could make a shadow an element in the background — because everyone plays with shadows — and imply the thing that’s gonna come up. And you’re gonna imply in the Joker cover that Catwoman’s gonna come up. You can imply in the Catwoman cover that the Joker’s gonna come up — by doing shadows. And I thought that was the perfect way to do it because now you’re precursing what’s gonna come up. And it just seemed like a great idea. The other thing that was very cool is you get to use this kind of perspective, where you’re looking down one street on one side and then you’ve got this kind of fish-eye lens, and then you end up looking down another street on the other side. Although they go off at different angles, when you use the perspective, they seem to go straight off. That was a lot of fun too. 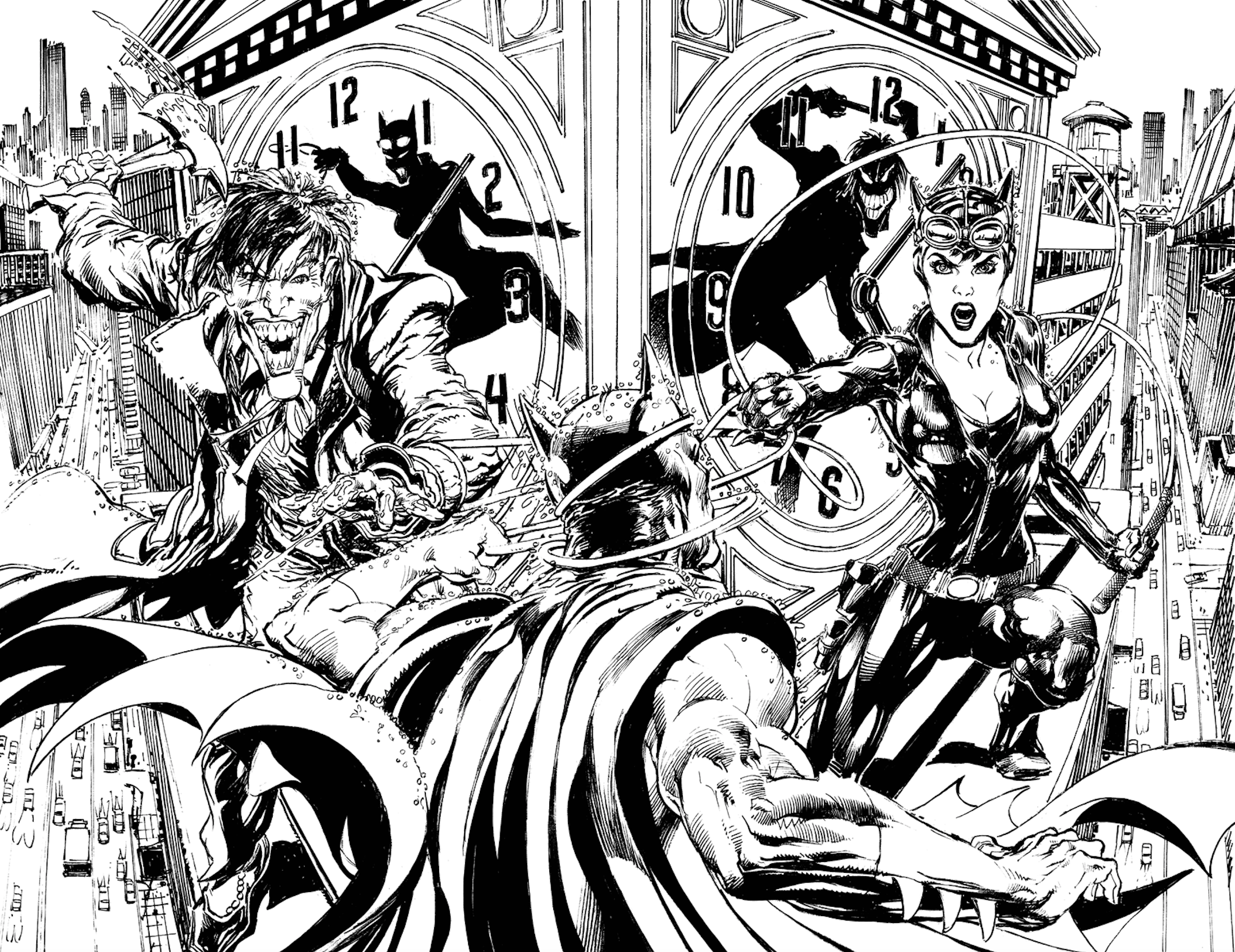 Dan: I’ve always enjoyed when you tuck in New York City Easter eggs like on your Batman #251 cover — that’s Park Avenue and the Helmsley Building and all that. Were these two streets based on any real place? Did you use any kind of reference?

Neal: No, no. Basically, I thought — part of the thinking is this: It’s Gotham, you know? It’s sort of like, “What is the third actor in every play that Batman is in?” Every play that Batman is in is in Gotham. So, doing a city is tantamount to putting the third actor in. So it doesn’t really have to be identified. You don’t wanna identify it. My view is we’re involved in the virus that’s going on, we’re involved in America, we’re involved in the world. So, we’re conscious of what’s floating around and our conscious brain is saying, “Cities are in trouble, people are in trouble.” So, as soon as you put the city back there, you say, “Yeah, it takes place now.” It’s now. Because it’s a city. So, I didn’t want to say, oh, it’s just Gotham City. I wanted to say it’s a city. So, they’re both iconic city scenes or city streets — but not to identify them because I don’t want it to be Gotham, because then I’m not today. Today, it’s not just Gotham, it’s every city in the world. 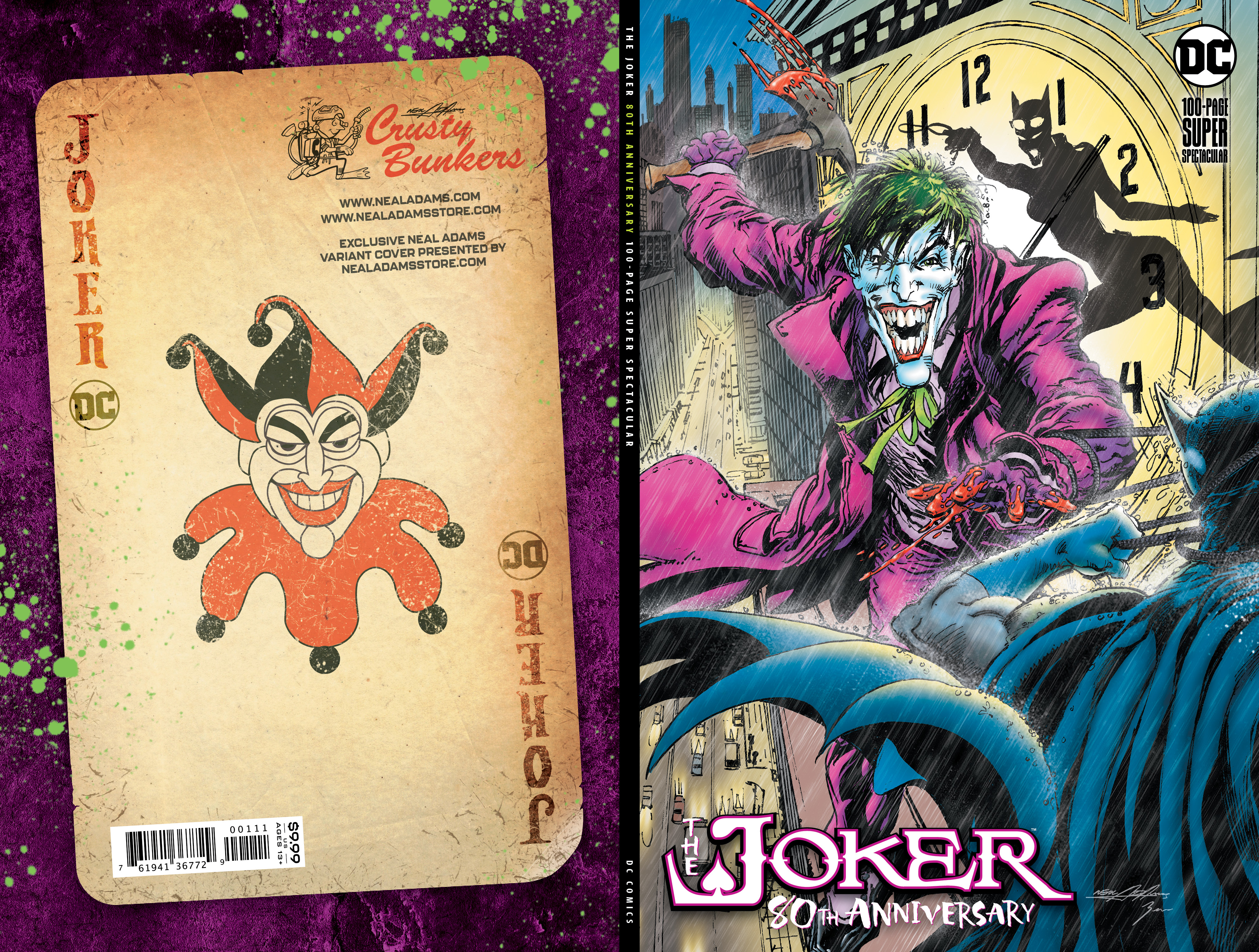 Dan: Now, the Joker, of course, you’ve worked with quite a bit over the years, most famously with Batman #251. You’re well known for helping to redefine the character and all of that. Catwoman on the other hand is a character you’ve barely touched. I mean, you have merchandising images, and there’s been covers and whatever. But I don’t think there’s a story that you ever illustrated with Catwoman in it.

Neal: No, there’s not. There’s not, but I have a son in the industry who’s not my son. And his name is Adam Hughes. And I really love Adam Hughes’ stuff. Adam first came to me very early in his career and we had long conversations and there’s been kind of a relationship. I mean, he calls me Dad. Yet, he’s actually learned to draw women better than I do. And I thought, you know what, if I know how to do the Joker, but Adam Hughes knows how to draw Catwoman, I’m gonna channel Adam Hughes in that Catwoman. So it’s not just me, it’s me and Adam Hughes doing that Catwoman. And I thought that was the right thing to do. 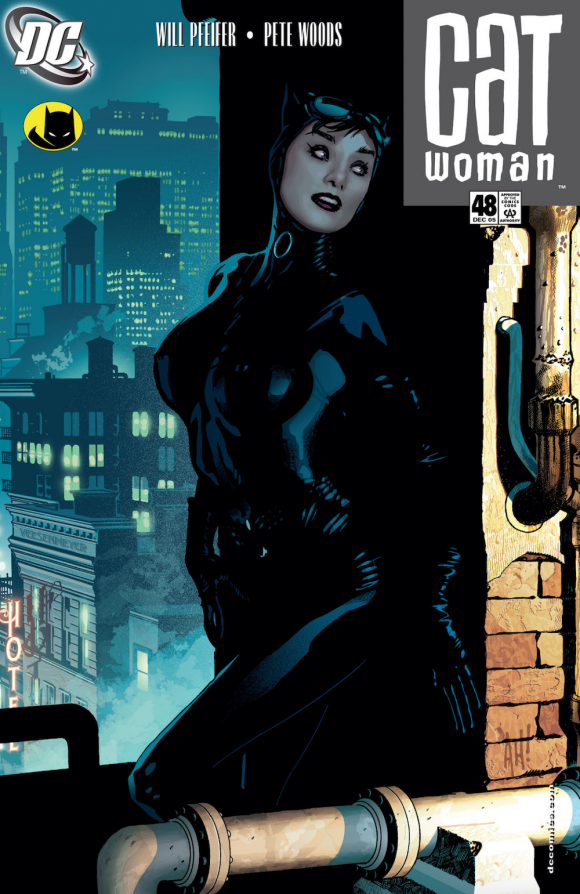 Dan: Are there any Easter eggs in here that you would like to mention that people might not necessarily pick up on?

Neal: I think the joy of exploring it is this whole idea of the back of Batman and the way the whip lashes around and the way Batman is responding. All these little subtleties that are there, are there to explore and to enjoy. It’s almost like an Easter egg hunt. Did anybody ever do a truly integrated double cover? I mean, I even did one where I had Batman fight Superman, right? Two covers, and you put them together and you see, “Oh, they’re fighting across the covers,” but in a way, that was easy. That wasn’t a challenge. I drew it so that this would appear over here and that would appear over there and that’s gonna work out fine. But it’s still cut off. This, if you look at it as individual covers, it’s not cut off. It’s a whole cover. Then you put it together and it’s a different cover. I mean, I just think that’s so cool. 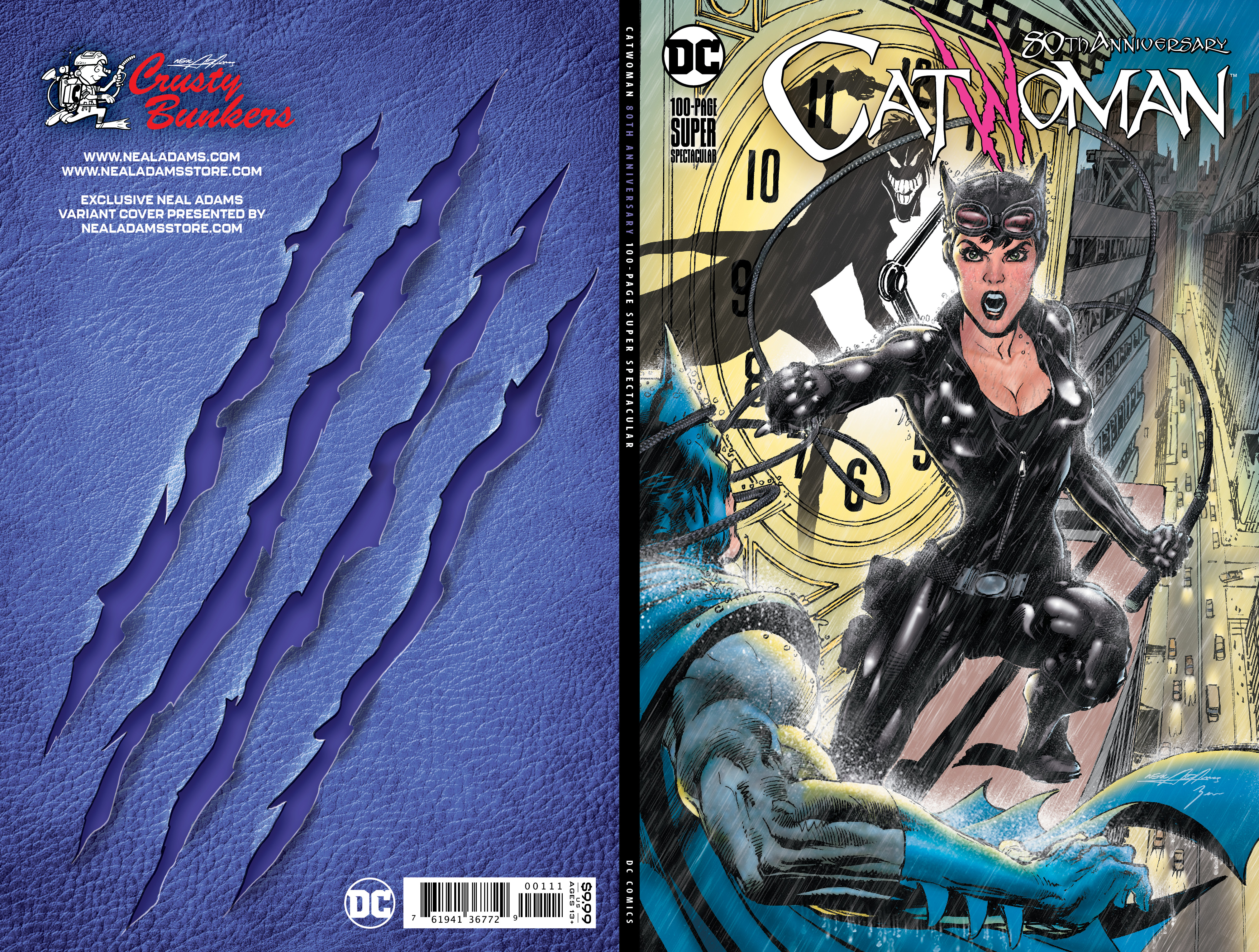 Dan: It looks to me that Batman was fighting the Joker first and then Catwoman comes into the picture and he turns toward her, somewhat surprised.

Neal: In a way, yeah. Absolutely. Absolutely, but she’s also, you know, because she’s Catwoman, she’s sort of on his side. You get a little bit of that. Truly, Joker’s against him, but why is Catwoman there? Isn’t she my bud? And you gotta know those things. I mean, I read the comic books, I know what’s going on.

Dan: I don’t know, Neal. It seems to me like this is the climactic scene for your next miniseries.

The two covers are exclusive to Neal Adams’ online store and his Burbank, California, retail outlet Crusty Bunkers. He’ll also have them available at comics shows, whenever they resume. It’s $120 for the pair, signed by Adams (though you can choose to leave them unsigned). They’re available for pre-order now. Click here for more info.