Neal has a lot on his mind.

Yesterday’s installment featured Titans Hunt #5, which was based on The Brave and the Bold #79. (Click here.) 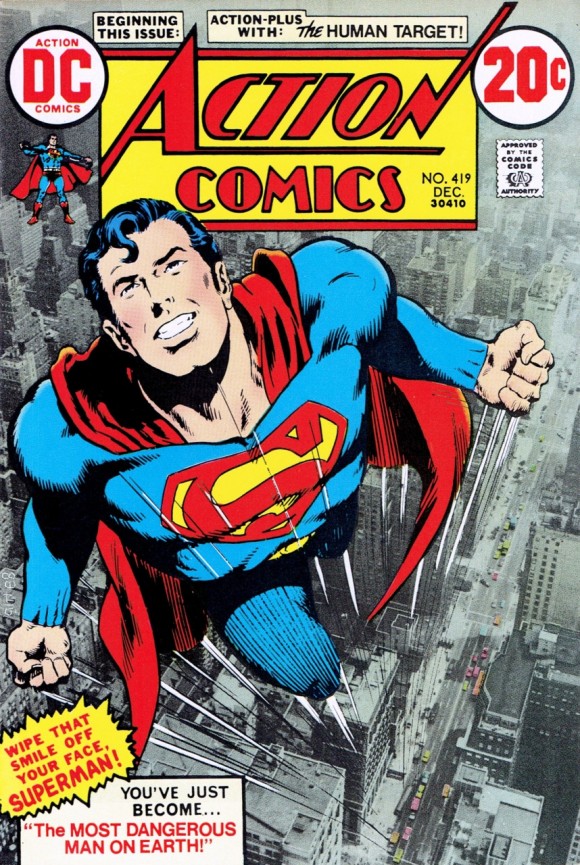 This one of the few Superman comics I had as a kid. I remember feeling vaguely unsettled by the cover, with that “Wipe that smile off your face, Superman! You’ve just become … ‘The MOST DANGEROUS MAN ON EARTH!'”

I wasn’t clear on whether Superman had turned evil and was into it, or what. It just seemed a little scary that someone with Superman’s powers could be bad — and be happy about it.

Looking at it in that context, Sinestro is an inspired choice for the modern version. (By the way, that’s not what Action #419 is actually about, but that cover definitely stayed with me.)

Neal Adams: This is another one of those, “I hate this cover.” (See Neal’s discussion of the classic Superman #233, here.) 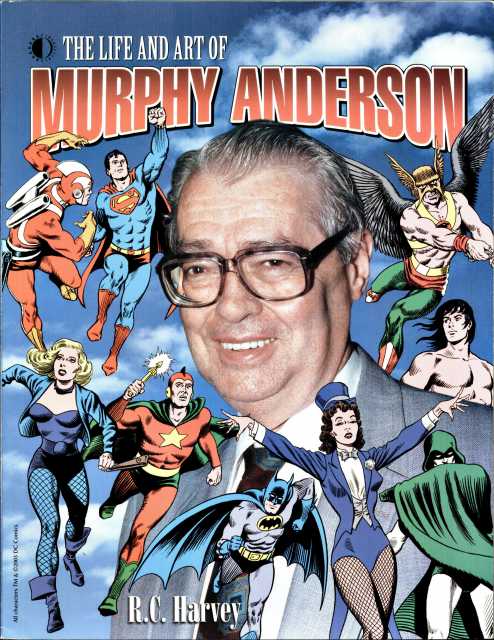 But he inked the cover and I was never happy with the cover because it looked mushy to me. It also was a cover where we used a photograph for the background. You notice that. Something the purists will decry nowadays but, in fact, I think it’s a very good concept.

Neal: Unfortunately, because of the reproduction methods, the cover was done at 62 lines per inch so it’s a kind of fuzzy, out of focus, not clear thing and the color on it is flat. There’s no real detail on it.

I have since done an illustration like this just to satisfy myself that there’s a good concept there. And I never thought I would see necessarily this thing in print. Now, I have a cover like this. (Gestures to Sinestro #20.) 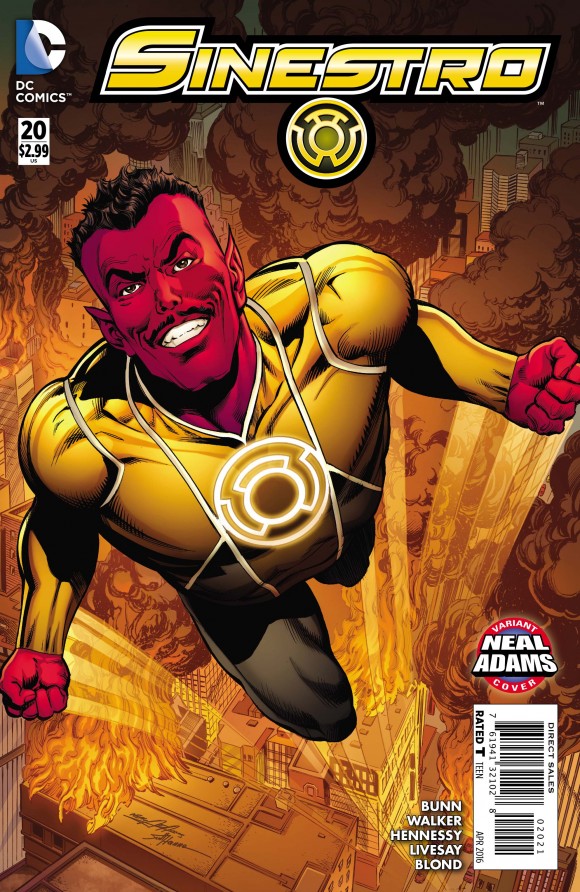 Dan: And this was inked by Scott Hanna (you can read his commentary, here) and colored by Jeromy Cox.

Neal: Right. Much better line. A much stronger line. So suddenly everything snaps into position and goes well. But the terrible thing was I didn’t want to do the photo background (this time) because I didn’t have the same photo.

I had this cover I could work from but had to draw it. But I realized, look at all this crap! (Indicates the tiny lines of all the buildings.) I’m gonna give the poor inker heart failure. (Both laugh) With all this crap.

So I realized, since it’s Sinestro, I’d better destroy the city and draw a lot of smoke all over this or he’s gonna call me (Dan laughs) and say, “What the hell are you doing to me? I’m not gonna do all this stuff! Are you out of your mind?”

Because imagine turning all this into drawing. Totally insane. So I managed to cover two thirds of it with smoke and then I put some city in there in between the stuff. And then it got colored in such a way that you could barely see it anyway. 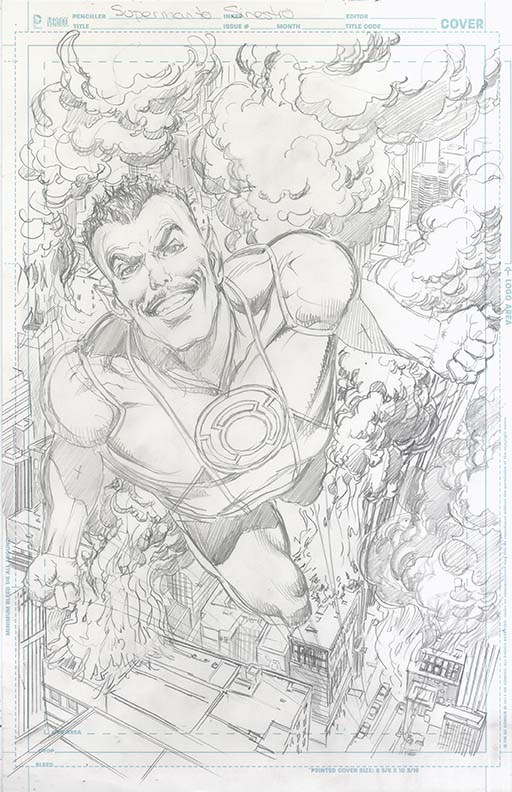 Dan: Now let me ask you this. I’m just curious as a fan. I’m not an artist. When I do see that you draw buildings like this that look very much like true-to-life buildings, do you use photo reference?

Dan: I was wondering about that.

Neal: Some guys do sort of imaginary… Like Jim Lee. Jim Lee’s buildings are sort of fantasy. They’re based on real buildings but really they’re sort of fantasy. The (original) Image guys seem to do that. It came at a time when people were paid more money for pages and could actually do their backgrounds. If you’re paid poorly, you don’t wanna draw cities. You don’t wanna draw crowds.

There’s a thing that happens in comic books. I’m gonna tell you an inside secret, OK? There’s a thing that happens in comics… where the writer (laughs) writes a double-page spread where you have, like, all the X-Men or all the Justice League and all the evil Justice League or whatever it is, coming at each other battling each other and very little dialogue.

The writer then writes it and says “they’re battling and all these characters are here and blah blah blah.” He says: “Have fun.” (Dan laughs)

No. Can I just say this? It’s NOT fun. It’s never been fun. Whatever writer THINKS it’s fun? It’s not fun.

Neal: YOU may have a good time looking at it but it is NOT fun. Do your job. Write a story. This is not fun. Cut it out. …

Hello? You’re turning the page because you’re bored, OK? Understand that the artist likes to draw things where he’s interested and as long as he’s interested, you’re going to really enjoy what he’s doing. But when he gets bored, you’re gonna flip that page and you’ve just given him a lot of work to do for nothing.

Maybe call it a warning to the writers. Don’t have them do things like that. Really. Not crowds of people. Nobody cares.