NEAL ADAMS MONTH: What’s Red and Black and Green All Over?

Batman #243 and Red Hood/Arsenal #9 present a lesson in color theory.

It’s NEAL ADAMS MONTH here at 13th Dimension, and we’re featuring daily commentary by Adams on his variant-cover project for DC Comics. Each of his 27 variants is a twist on one of his famous covers from the past. He provided the pencils, and the inks and colors were handled by some of the biggest names in the business like Frank Miller and P. Craig Russell.

Yesterday, we gave you Telos #5, based on Superman #233. Click here to read what Adams had to say. (And click here for inker Richard Friend’s thoughts about working on Adams’ pencils.)

Today, we’re back in Gotham, with another variant that comes out 2/10. 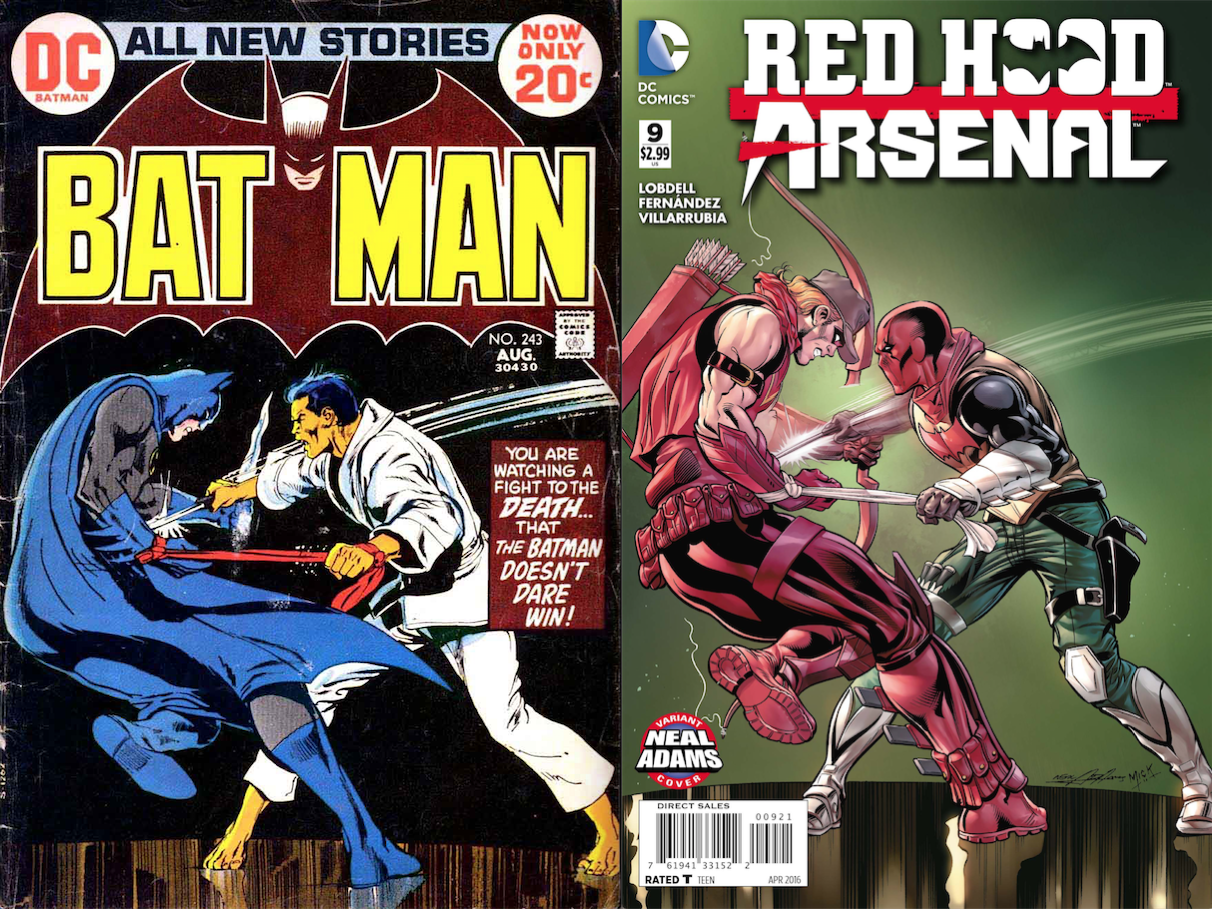 This one’s a lesson in color theory. Adams took the cover to Batman #243, which was the penultimate chapter of the original Ra’s al Ghul saga, and recast it with Arsenal and Red Hood.

In the original, Batman — in gray and the lighter blue that was used at the time — faces off against Ling, in his white outfit. They’re in stark contrast to a black background.

But what happens when you switch to a red guy and a guy in black, red and other dark tones? 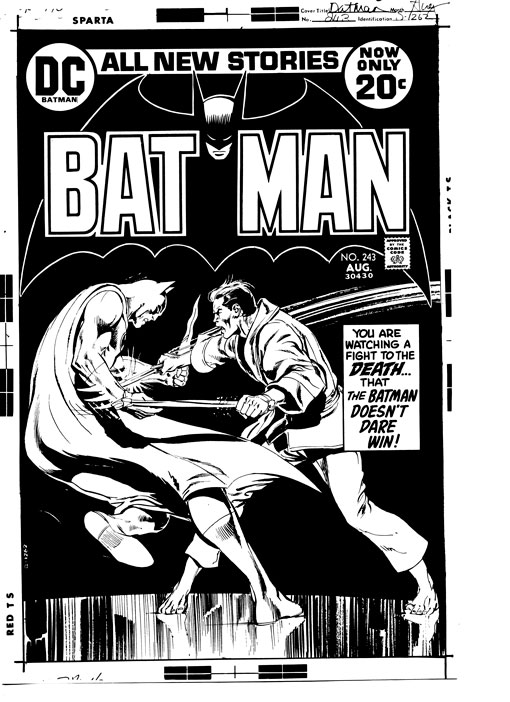 Dan Greenfield: OK, this is Batman #243 and Red Hood/Arsenal #9, inked by Mick Gray.

Neal Adams: Right. What’s interesting about this one for me is, because we picked the characters we picked, we didn’t have an opportunity to do this kind of basic, old-fashioned coloring. For example, on Batman, you have a nice, flat blue. On the other character, he’s got a white gi, OK, so he can stand out against black.

Neal: Right. And the colorist had to solve problems that were presented by myself. I mean, when you look at this in black and white, you see the figures very clearly. There’s no background whatsoever. The inker could have made a black background — and given the colorist an even worse problem (but didn’t). 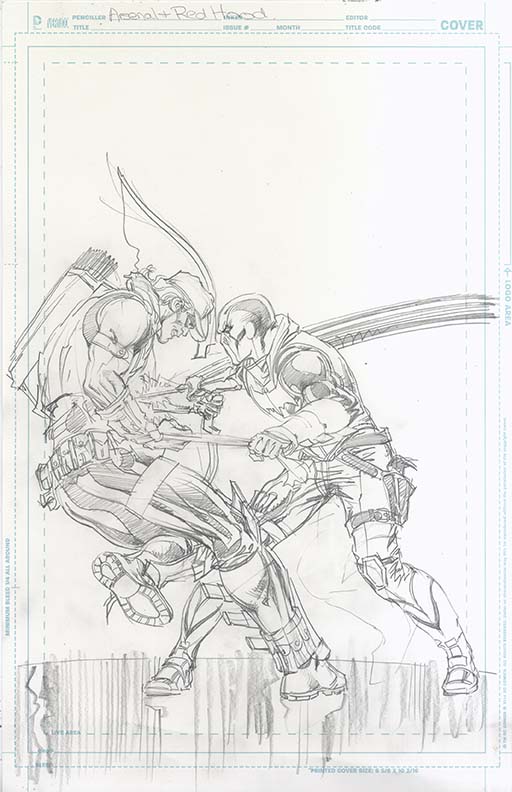 The new technology for colorists that we use today, where you can get airbrushing and all those other things, created a solution that, in a weird way, fights the original concept. The original concept is graphic and clear. This one is more realistic and it finds another space to work in because you couldn’t follow the same path. The same path is not available.

So, in a weird kind of way, this is watching the evolution of problems. It’s sort of like, oh, there’s 50 different problems. No! Very often, OK, there are 50 different approaches to problems and you don’t necessarily get the same solution.

By the time we got to the coloring, all the problems had changed. And I think it makes a successful cover. But you get to see this stuff happen! You throw it into the mill and you get to see what people do and this is the result of it. 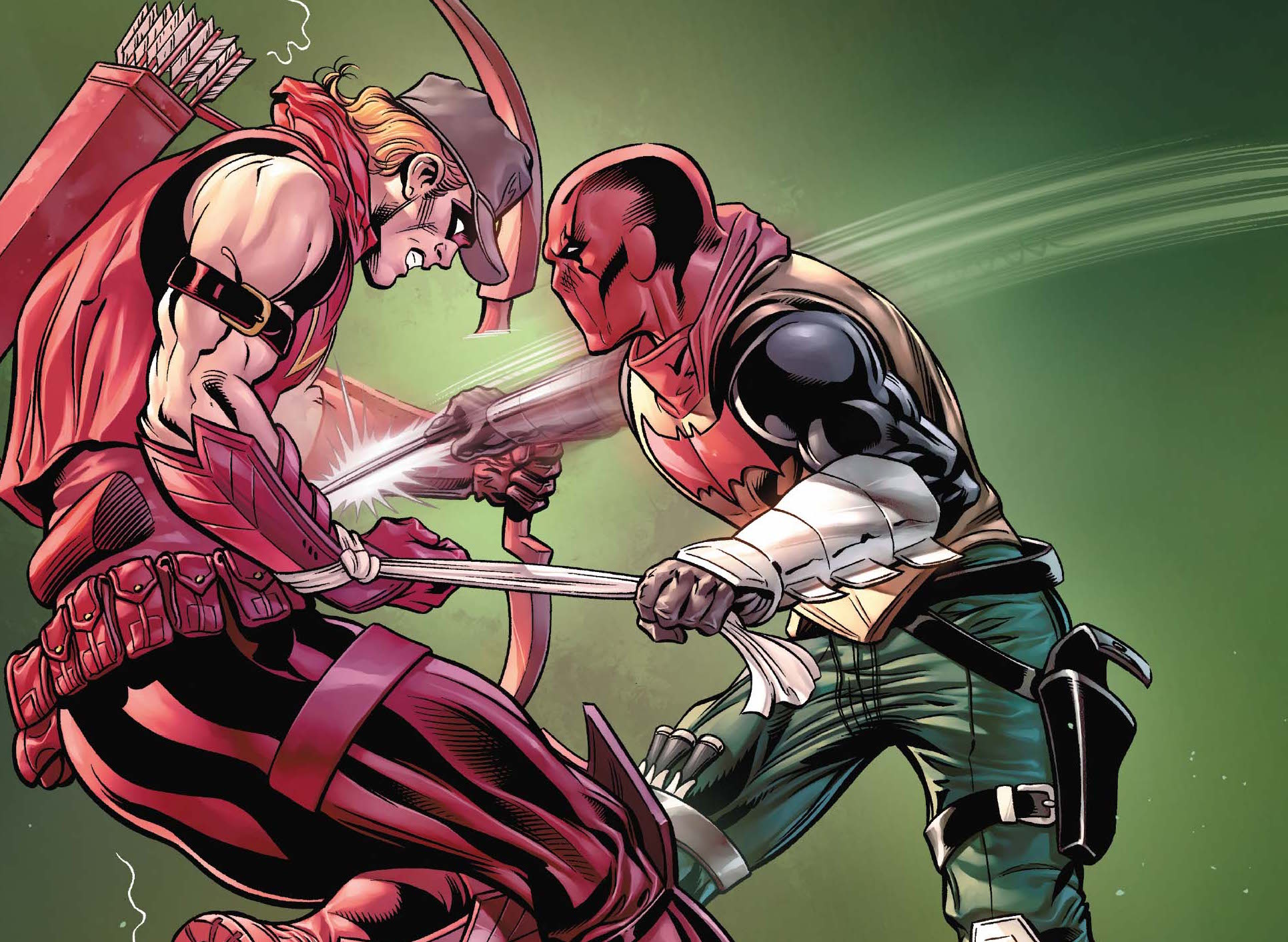 Dan: And, again now, DC gave you a list of current titles and they gave you the original covers (to emulate) and you made the decision to make that pairing?

Neal: Sure. But I didn’t make the decision to do the drawing first and then think about it. My decision was, hey, what the hell? This character has a weapon and it’s kind of martial arts, so these characters seem to work with this. That’s a good reason. Now let’s see what happens.

Neal: So it’s an experiment. These covers are experiments. They’re all experiments. And even as we go on, you will see more and more the experimental nature of these things. What will happen? I don’t know. I really don’t know going in!

NEXT: The buzz on Titans Hunt … as we get ready for Week 3. Click here.