NEAL ADAMS: How MAN-BAT Was Created

It’s NEAL ADAMS MONTH here at 13th Dimension, and we’re featuring daily commentary by Adams on his variant-cover project for DC Comics. Each of his 27 variants is a twist on one of his famous covers from the past. He provided the pencils, and the inks and colors were handled by some of the biggest names in the business like Dave Gibbons and Frank Miller.

Our previous installment featured Cyborg #8, which was based on The Flash #246. Click here.

This time, it’s Superman: Lois and Clark #5 — out now — based on Detective Comics #407, cover-dated Jan. 1971. The guest inker is Terry Dodson and the colorist is Alex Sinclair.

We’re at the final cover of NEAL ADAMS MONTH proper. I say “proper” because there will be a couple of Adams commentaries in March since two of the 27 covers will not be out until then.

Anyway, today’s original is a classic, somewhat horrifying cover, a Universal Monsters concept bleeding into Bronze Age comic-bookery. The new version? It’s just funny — but there’s a story there too.

Still, what’s particularly compelling about this segment is that Adams gives his personal history of the creation of Man-Bat, one of the great Batman villains/antiheroes to come out of the ’70s. 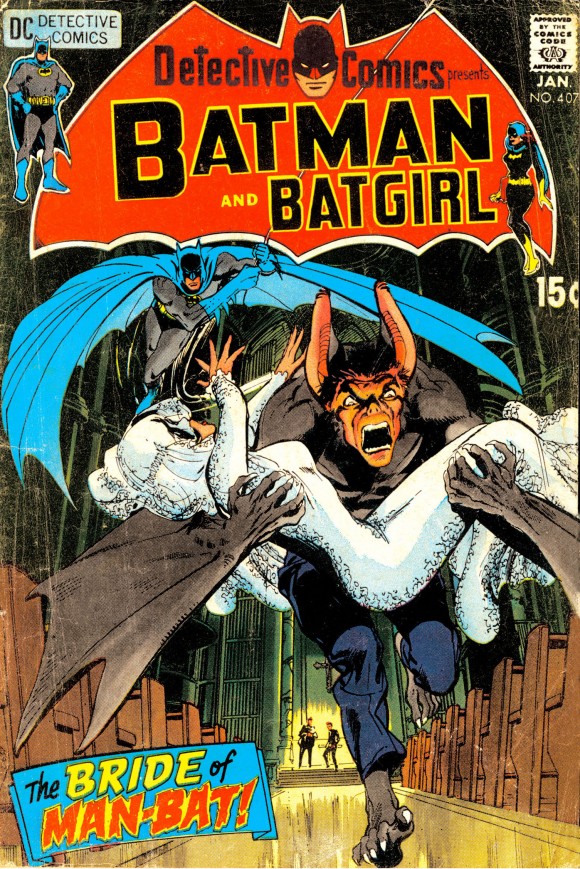 Neal Adams: Let me tell you about Man-Bat first before we even discuss this.

Neal: (Writer) Frank Robbins was sitting with (editor) Julie Schwartz in his office, trying to sell Julie Schwartz one of three ideas. They had gone through ideas and it was a summer afternoon. And behind Julie was quite a large window and the sun was coming in. And Frank Robbins was cooking and sweating. The sun was to Julie’s back but he wasn’t getting it as much. But it was one of those rally sunny days where the sun was coming in and you could tell that Frank wanted to get the hell out of there. (Dan laughs) “PLEASE let me get out of here.”

But he’d come up with some kind of story, because the truth of the matter is, when you’re writing a comic-book story, you don’t have to have the biggest idea in the world. You just have to have an idea. It’s how you embellish it, what you do with it. Well, Frank wasn’t selling anything to Julie and you could tell it was wearing on the both of them.

And I have seen Julie Schwartz in writer conferences with Gardner Fox and John Broome and he was now putting poor Frank Robbins through the same mill. He’d rejected all his ideas and now they were, between the two of them, trying to come up with an idea. So I was next to (Dick) Giordano’s desk, probably putting some Deadman pages on his desk or something. I don’t know what I was doing. You could see the look in Frank’s eyes, looking over in hope that something would miraculously come. 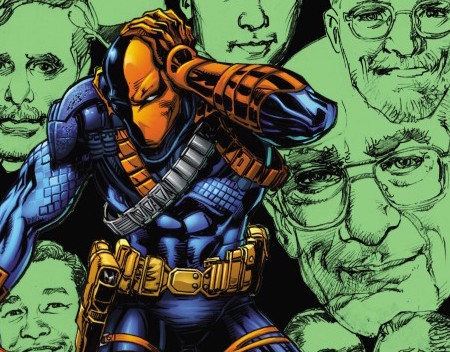 That’s Julie Schwartz immediately to the right of Deathstroke. (Click here for more.)

So Julie turned to me and said (affects gruff voice): “We’re looking for some ideas for Frank. Got any ideas, Adams?”

“No, I have a really good idea.” You could see Frank was, like (makes kind of a beseeching face)

I said, “I have a short synopsis. This is the idea: Man-Bat!”

I said, “No. Man-Bat! It’s a great idea. A guy injects himself with a serum he gets from a bat. He’s trying to get powers and he’s trying to give them to Batman as a gift!

“This guy is like a fan of Batman. He’s a scientist. Works in a museum. And he’s such a fan that he wants to do something for him, like give him — like Spider-Man — the powers of a bat. So he makes this serum and he tries it on himself and it turns him into a bat.” 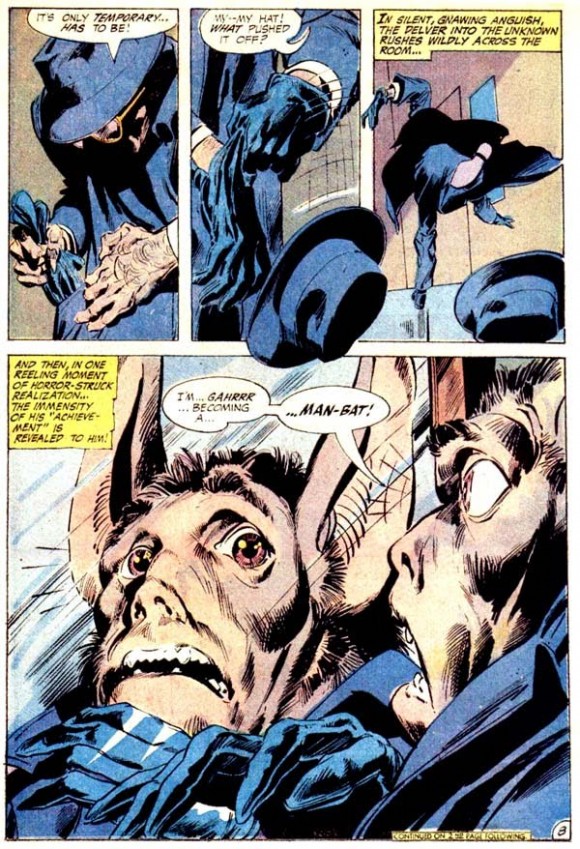 (Affects gruff voice, as Schwartz:) “I don’t like that.”

I said, “Julie, it’s a great idea. I don’t know what the hell you’re talking about. It’s a GREAT idea!”

And I said, “Julie, listen to me. I’m just gonna tell you, one time. Pay attention. At some point in the future, over at Marvel, somebody’s gonna be in a story meeting and they’re gonna go, “Why don’t we do a character called ‘Man-Bat’?” And it’s gonna be pulled right outta your hands, Julie. They’re gonna take it because, you know why? There’s no way that DC Comics can say no! (Dan laughs) There’s nothing wrong with the name. Nothing wrong with it. They can do it. They can do whatever they want with Man-Bat. They’re gonna have it. But we should have it.”

I’d written a half-page synopsis. Gave it to him. He says, “Can I give it to Frank?”

And so that’s how Man-Bat started. 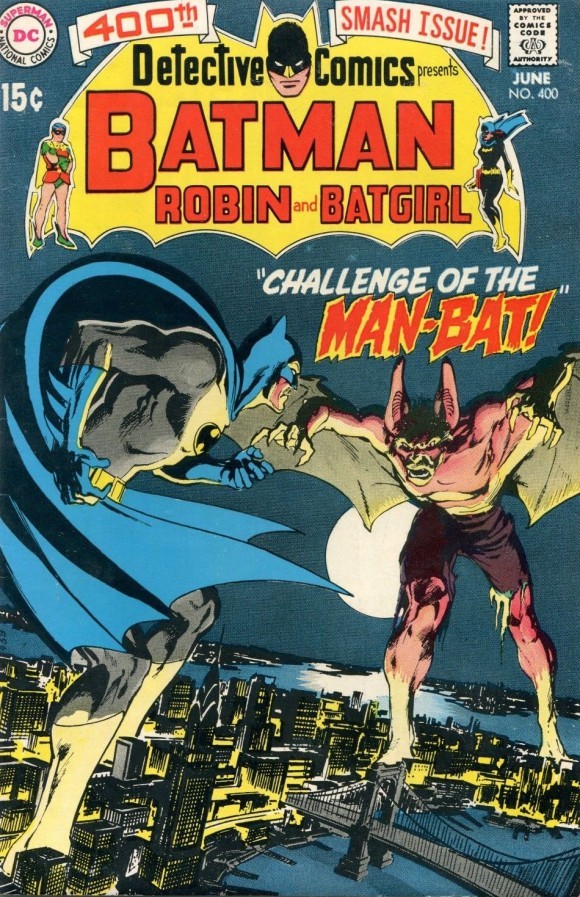 A little hard to jam this (Lois and Clark) into it, isn’t it? Because, why? What’s the rationale? The rationale doesn’t exist. It’s sort of like, “Why did we do this? There are other Man-Bat (covers) that made more sense.” 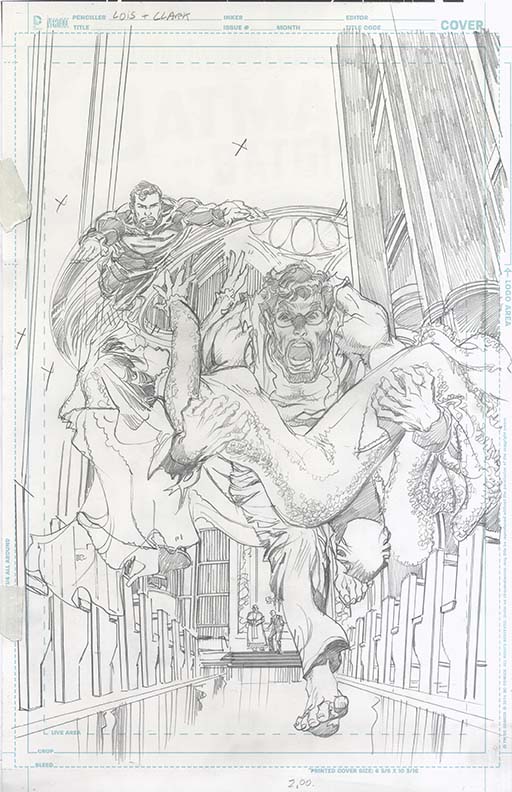 But the good thing is that it got done by Terry Dodson.

Now when we first got the coloring in, the uplighting was (barely) there. So I wrote notes and said (whispers), “Look, you’ve got Terry Dodson doing female figures, so let’s do uplighting.”

It was there, but it wasn’t easy to see. So I did a color sketch for the colorist.

Dan: Alex Sinclair is the colorist on this one.

Neal: Alex Sinclair is a good colorist. But even a good colorist sometimes has to have that communication. And look what he did. It’s fabulous. … He really just kicked ass on this thing. And it’s not an easy composition, too, ’cause you have a lot of black. So what do you have to color, you know? Random figures. But he managed to pull it out of the fire and it was sinking into the fire. And BAM, he did it! 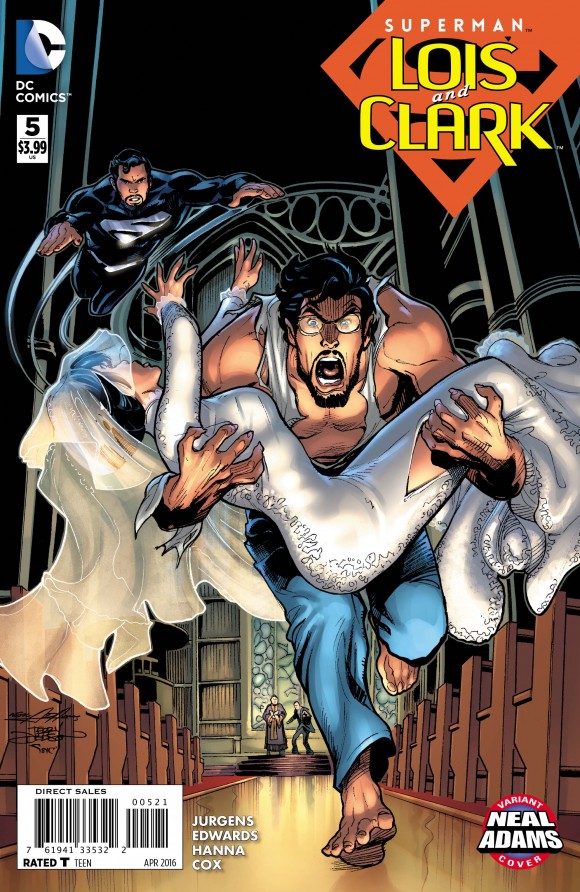 Dan: You also don’t have the benefit of Batman’s cape. In the original, you had Batman’s blue cape right behind the image for contrast.

Neal: Right! I forgot. He hasn’t got a cape at all and he (Clark) is no Man-Bat! But what we’re doing is taking advantage of what we do have and that is Clark with a beard running forward—which is a unique concept—and the beautiful, sexy figure of the girl, which makes this (gestures around the top) immaterial.

Dan: It’s true, too, that you’re thinking, why are Superman and Clark in two places at the same time? It does make you curious.

Neal: It makes you wanna buy it and that’s the goal of the cover.