‘My Comic Shop DocumentARy’: A Love Letter to a Hangout

Home » MOVIES & TV » ‘My Comic Shop DocumentARy’: A Love Letter to a Hangout

A MIGHTY Q&A with Anthony Desiato, director of a lovely film about his local comic shop. 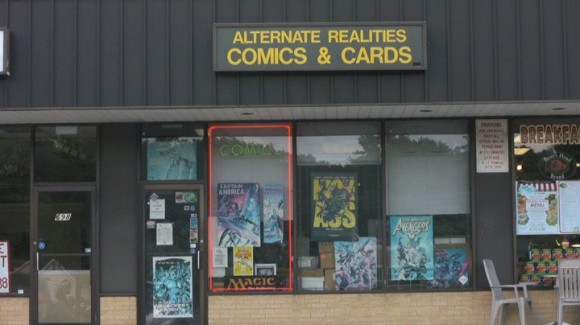 Years ago, I quit comics for a time, roughly a decade. Burnout, I suppose it was. I even went so far as to sell off my collection, lock, stock and Batman.

I know that may sound strange given you’re sitting here reading my comics website/blog/whatever you want to call it. But it’s true.

I sold most of it to a guy named Steve Oto, who owns a store near me called Alternate Realities, in Scarsdale, N.Y.

Steve’s an interesting guy to talk to. Highly opinionated with a sort of hangdog wit. His store is kind of your classic suburban comics shop. A little too cramped, a steady stream of regulars coming through. An affable, if insidery atmosphere. 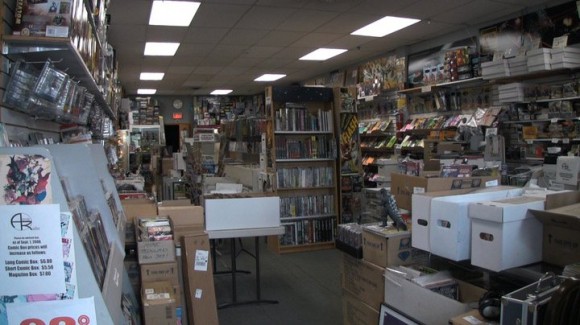 I wonder if any of my old comics are tucked away in there.

It’s not my regular shop mainly because of convenience. That’s on me. But I do like visiting from time to time, looking for the odd item here or there, seeing as how I’ve reconstructed much of my collection and in some very significant ways surpassed the original.

Turns out, one of those Alternate Realities regulars was so taken with the place, he made a film about it. Anthony Desiato worked at the store and his full-length My Comic Shop DocumentARy is a love letter to his hangout.

As a filmmaker, Anthony was learning the ropes when he made the movie a few years ago, but it’s a heartfelt tribute to a home away from home that so many of us will recognize. The core of the movie is Steve himself. Much of the 1 hour and 11 minutes is about his mercurial nature and how the regular customers and employees react to it but Anthony doesn’t shy away from anything, at least as far as I can tell. 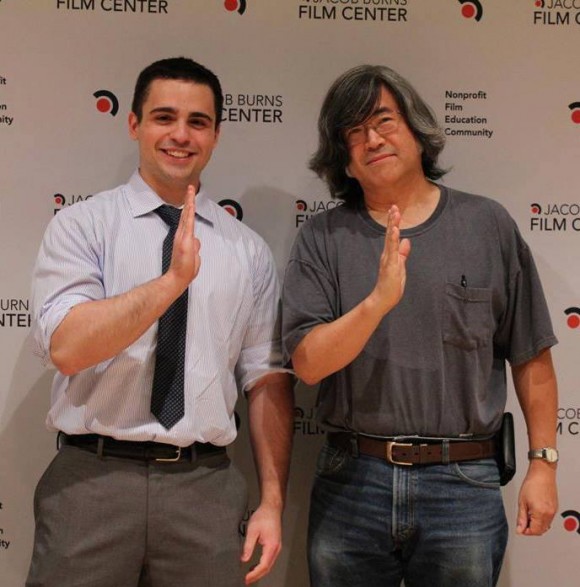 It’s an honest portrait and as a viewer, it really doesn’t matter whether you’ve been to Alternate Realities or not — the hallmark of a good documentary. If you have a regular LCS, there’s a lot in here you’ll recognize, a lot in here you’ll love and, yeah, some stuff that will make you squirm.

Anthony has a second feature, the half-hour By Spoon! The Jay Meisel Story. Jay is a prominent guest star in the first film and I plan on writing about the spinoff another time soon.

In the meantime, here’s the feature, which is on YouTube, and a MIGHTY Q&A with Anthony. (Oh, and keep an eye out for Brandon Montclare. The writer of the Image hit Rocket Girl, with artist Amy Reeder, is a former store regular.)

Anthony Desiato: One day, Steve Oto — the owner of Alternate Realities, AKA the “AR” in My Comic Shop DocumentARy — asked a teenaged customer, “Hey kid, how’s your alphabet?” Fortunately, that young man knew his ABC’s, and he started working at the store that summer organizing back issues.

He would continue working at the store throughout high school and college, realizing along the way that the true story wasn’t in the pages of the comic books on the walls, but rather in the community that had developed at the store. 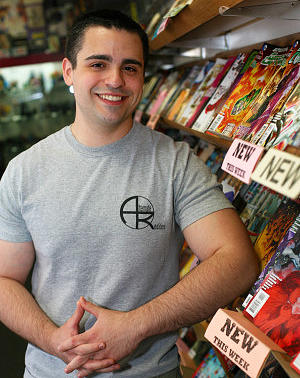 How did you get into comics in the first place?

I was 5 years old, and the now-defunct store Heroes World (White Plains, N.Y.) had a window display advertising “The Death of Superman.” The display consisted of a Superman action figure in a tiny coffin. My parents bought me the story, my father read it to me, and that was it.

Did you go to film school?

I went to law school. This project was my film school. I had never shot or edited anything prior to My Comic Shop DocumentARy. Making this film was an amazing, frustrating, educational, demanding, fulfilling process. The only way I was able to do it was passion for the store and the story I was telling.

People ask all the time, “why law school,” but I love that I took the path I did. It was different, and weird, and it just worked for me. 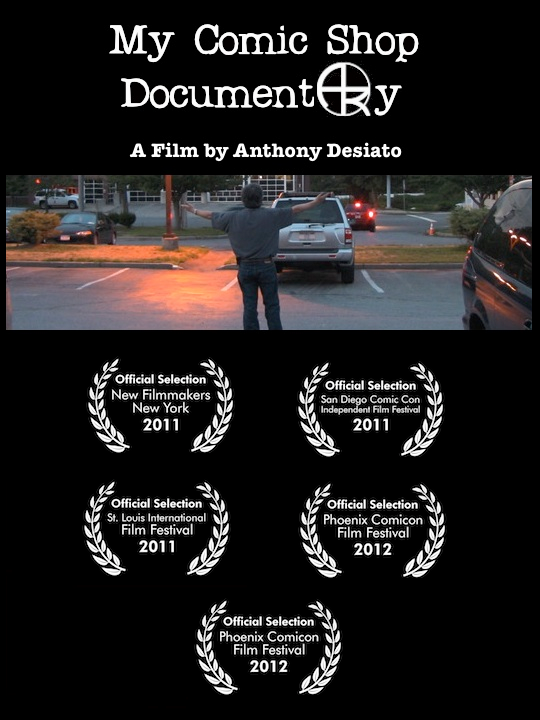 Most people think their workplace or place they hang out would make a good movie. At least most people I know. But you went ahead and did it. What is it that made you think AR could sustain a narrative?

The people. I had written journalism pieces in college about Steve, Jay, the customers, so I knew that the material was there. Practically speaking, I knew that there were so many personalities and aspects of life at the store (from the business side of running the store to the Saturday dinners to the Jay and Jeff (Hwang) spotlights) that I’d have enough different places to go in the film, literally and figuratively.

Most of all, I trusted that there was a reason why telling this story appealed so much to me. 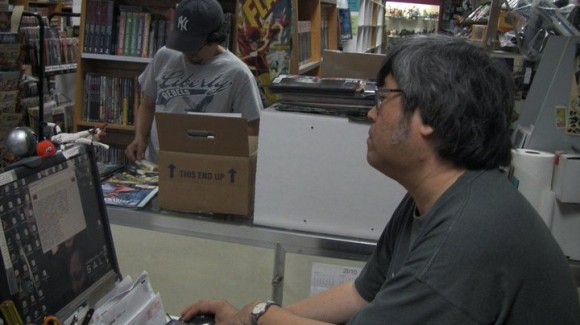 How did everyone, especially Steve, react when you first screened it for them?

They laughed during the movie, and didn’t stop talking to me afterward, so I think they liked it! Steve, in particular, was a tremendously good sport and wasn’t — to my knowledge — offended by anything said about him or the store. I didn’t tell him beforehand that I had dedicated the movie to his late father, and I know that hit him pretty hard.

Not to be indelicate but you seemed to set out to show that comics readers defy stereotypes. At the same time, though, you seem to validate some of those very stereotypes, especially where Hwang is concerned. It’s the same kind of criticism you see with the AMC show “Comic Book Men.” And there are almost no women. Can you give some insight into your thinking here?

The only thing I set out to do was depict the store and the people there honestly and accurately — to show all sides. Take Steve, for example. A number of times in the movie, he displays bitterness and frustration toward the store, yet there are also moments where he expresses sentimentality about it as well.

With respect to what you asked about: Are there people in the movie who may fit into the “comic book fan” stereotype in some way? Sure. (However, I would argue that Jeff Hwang is in a category all his own!) However, I think it’s fair to say that the majority of people featured in the film are articulate, sociable, employed — we even see some wives and girlfriends! — things that are not often associated with comic book fans. Overall, as both the documentarian and a comic book fan myself, I believe and hope that the film does more to challenge stereotypes than validate them.

As for the lack of women, the fact is that most of the customers at Alternate Realities are male. 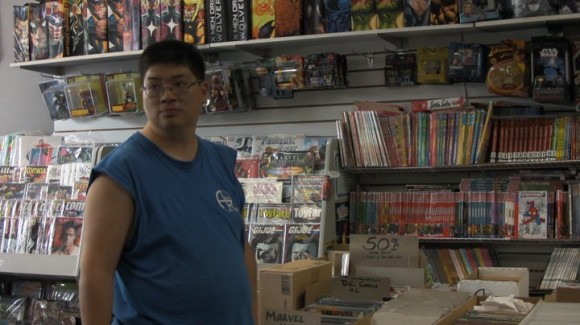 Jeff Hwang. Not your average customer.

What’s the reaction been inside the comics community?

Most of the feedback I’ve received since releasing the movie has been on the YouTube page. See for yourself what folks are saying — I’ll let them speak for themselves. All I’ll say is that the response has been incredibly gratifying.

Tell us about the spinoff.

I recently completed a spinoff called By Spoon! The Jay Meisel Story, a documentary short focusing on the curmudgeonly flea market vendor we met in the first film. Specifically, the film chronicles Jay’s final days at the flea market before its closing. I’m very proud of this project. Although technically a spinoff, it stands on its own and has a tone distinct from the first film (while still maintaining the same sense of humor).

The film is not publicly available yet, but the plan is to secure some form of distribution after (hopefully) hitting the film festival circuit.

What are you doing now, what’s next?

In addition to promoting By Spoon!, I’m currently working on a new documentary project titled Wacky Man: The Rise of a Puppeteer (teaser: ). The world of puppetry is entirely new to me, so it’s been very interesting to delve into that and tell a different kind of story.

For folks looking to keep up with any of these projects, please check out my official site at Flat Squirrel Productions and Twitter (@DesiWestside). All of the projects also have Facebook pages.