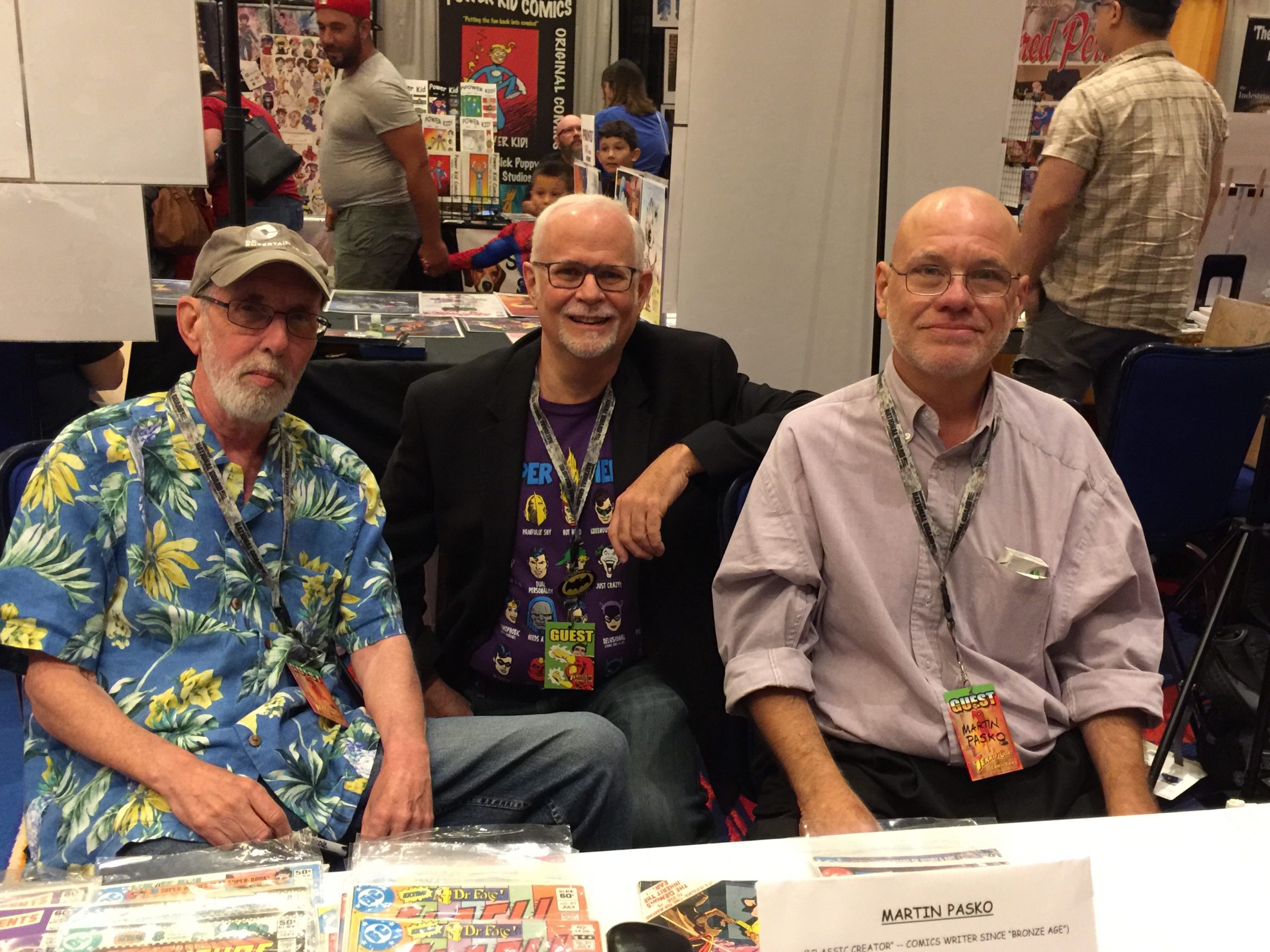 We interrupt the regularly scheduled series of shameless plugs for my book Direct Comments: Comic Creators In Their Own Words for a tribute to my late friend, Martin Pasko (Aug. 4, 1954–May 10, 2020).

Shortly after his birth in Montreal, Jean-Claude Rochefort was rocketed across the border to New Jersey where he was adopted by a kindly couple named Pasko who raised him as their own. Now known as Marty Pasko, the child grew to maturity, knowing he possessed talents and abilities far beyond those of mortal fans, to one day pen the adventures of that orphan from the stars, Superman. Not to mention hundreds of other heroes of comic books, animation and TV.

I don’t remember the circumstances of our first meeting; in my memory, Marty was always in my life, like family. My guess is we first crossed paths at one of the very early-1970s New York Comic Art Conventions, although I knew his name from the many (many!) letters he had printed in the comics of the day, particularly those edited by Julie Schwartz. It was in those letter columns that Julie gave Marty the nickname “Pesky,” but I know for a fact from later talks with Julie that the crusty old editor loved getting intelligent letters from thoughtful fans and he often found Marty’s insights as useful as they were “pesky.” 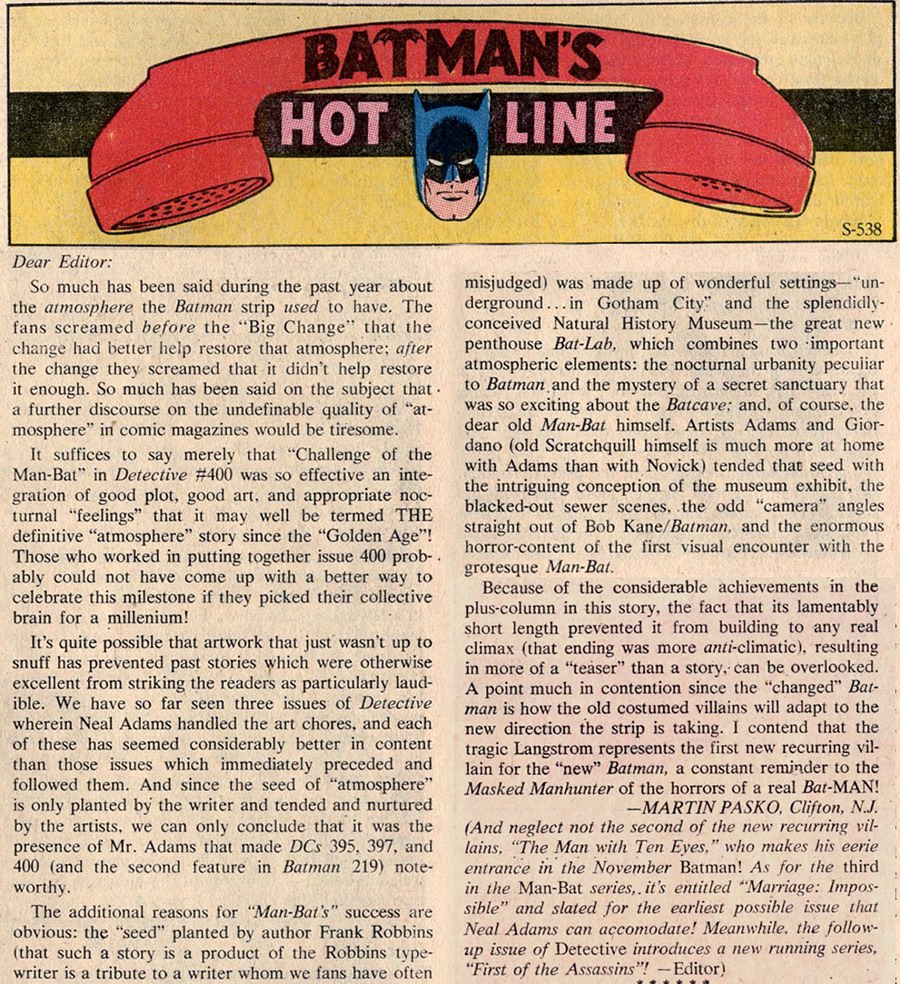 When we did finally get together, Marty and I bonded instantly. It didn’t hurt that I had the unfailing ability to make Marty laugh. He was the Jack Benny to my George Burns (look it up, youngsters!) and it cracked me up that I could crack him up, that I could lay him out on the floor, literally gasping for breath, with as little as a sincere recitation of “Direct dialing” or “Wankel rotary engine.”

At the beginning of my career, which followed his by about two years, Marty became a sort of creative mentor to me. While he had only two years on me by the calendar, he was already about a decade ahead of me creatively. From the very start, Marty’s writing was clean and crisp and distinctive, showing few of the newbie writer’s fumbles and mistakes. He was contributing Superman stories to the Schwartz-edited titles after only about a year into his career; it took me about six years to go from start to Schwartz. 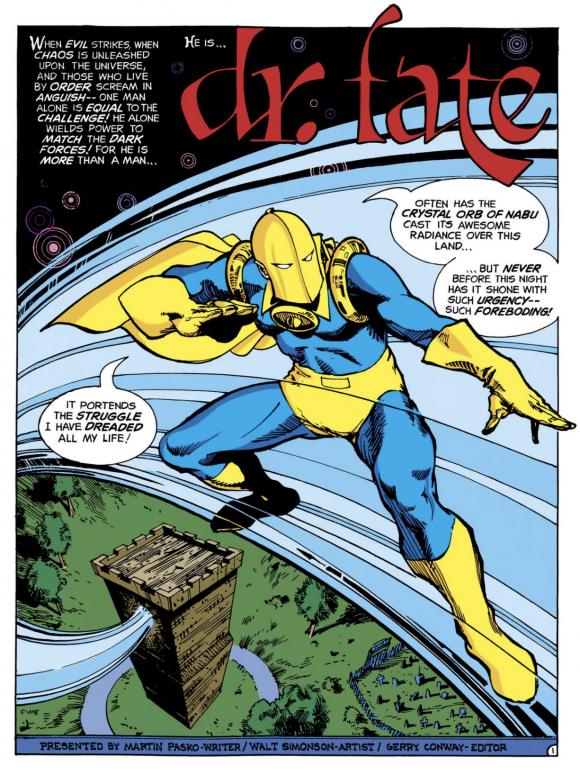 Marty’s credits are abundant and well known from his work in comics, beginning with Superman (including as writer of DC Comics Presents and the World’s Greatest Super-Heroes Starring Superman newspaper strip); his revivals of Dr. Fate with Walter Simonson in 1st Issue Special and Swamp Thing with Thomas Yeates; runs on Wonder Woman, Metal Men, Kobra, the Star Trek newspaper strip, and Gargoyles. He also wrote for live action and animated TV, including a Daytime Emmy Award-winning turn on Batman: The Animated Series. Read all about them here.

As for my personal thoughts about Marty, I covered those in my memorial post to him here, last year.

So, thinking of you on your birthday, Marty, and offering up a hearty, “Wankel rotary engine!”

Here then, MY 13 FAVORITE MARTY PASKO PROJECTS YOU MAY NOT HAVE KNOWN HE WROTE, in alphabetical order: 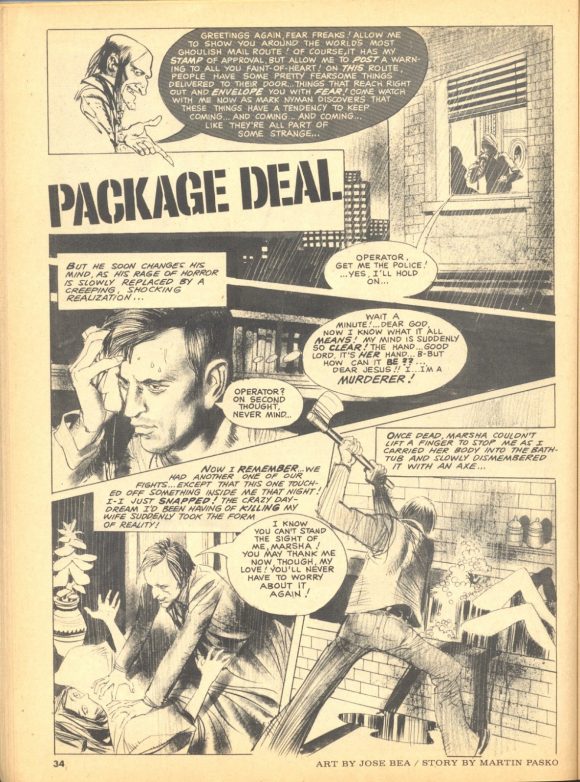 The Narrative Arts Alliance Benefit Auction Catalogue (1976). In short, a bunch of comics pros got together in the mid-1970s to stage “The Great Comic Book Expo” (“79 hours of comics madness beginning on May 26 (1976) at the Commodore Hotel in Manhattan”). This eight-page, 5.5” x 8.5” Xeroxed catalogue for the auction that was to pay for the Expo was produced on winter’s eve in the basement office of Paul Levitz, written with maximum snark and much internal hilarity by Steve Gerber, Marty, Paul, me, and likely several other people whose names elude me. Marty also contributed the cover art. Neither the auction nor the Expo ever came off. 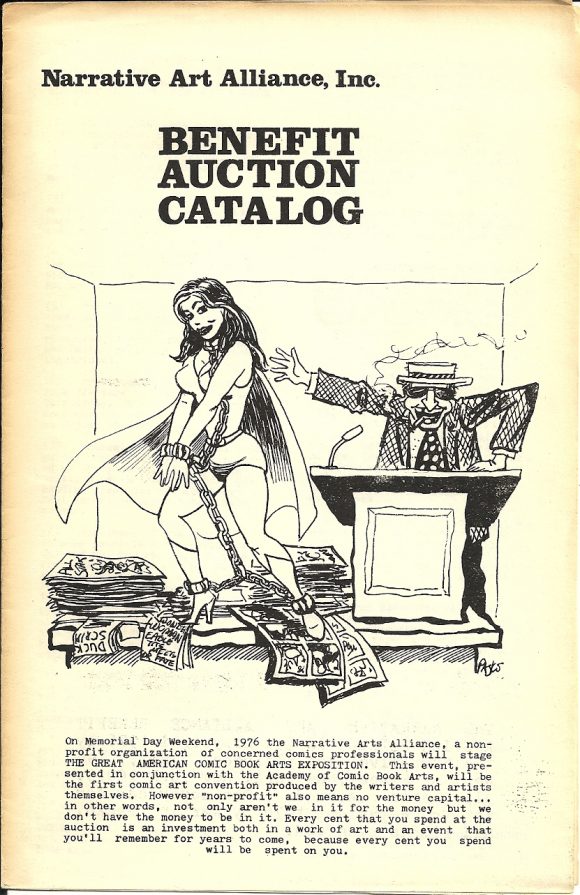 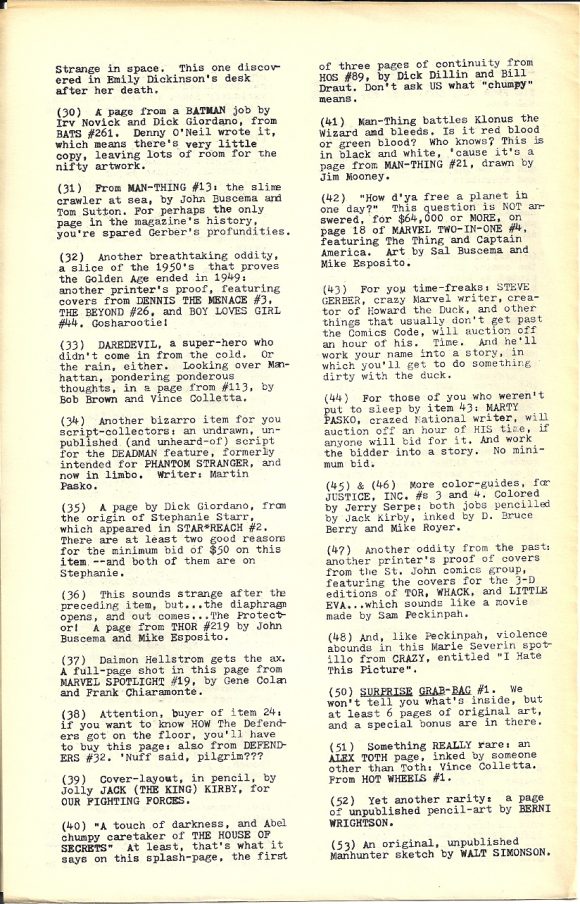 Plop! #24 (DC, Nov./Dec. 1976). “Welcome!” is Marty’s hilarious framing sequence for the final issue of Plop!, DC’s hit-and-miss humor comic. Marty’s story, illustrated by Sergio Aragones, was a hit and included some inside gags so inside I’m no longer sure what they were referring to. 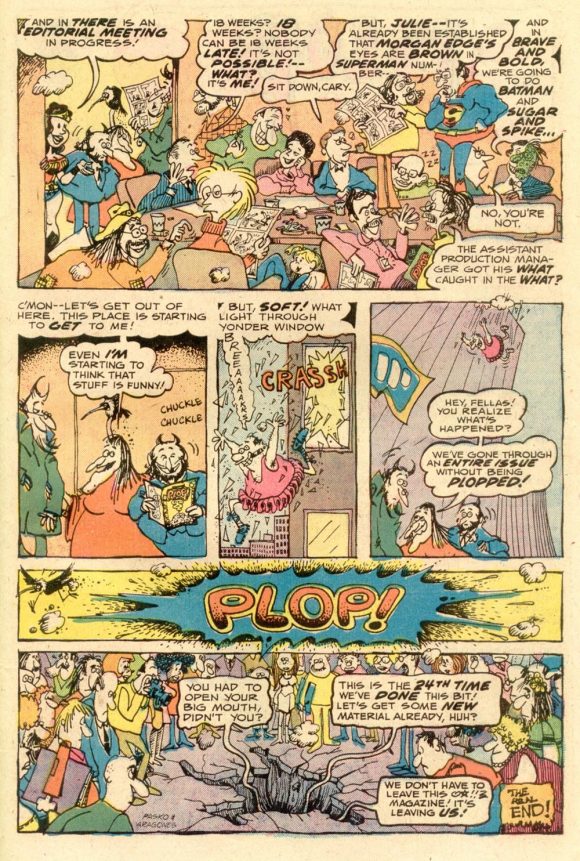 Marvel Novel Series #9: The Marvel Superheroes (Pocket Books, 1979). To my knowledge, the Daredevil short story “Blind Justice” in this Len Wein/Marv Wolfman-edited anthology was Marty’s only published prose fiction. I don’t remember his rationale for using the “Kyle Christopher” pseudonym, but he certainly had nothing to be ashamed of here. Years later, when I was an editor in DC’s Licensed Publishing department, I kept offering Marty prose projects to write but he never really seemed comfortable taking them on. After my fifth or sixth offer he got a little exasperated and demanded to know why I kept pushing these gigs at him. I told him it was because I wanted to read more of his prose. 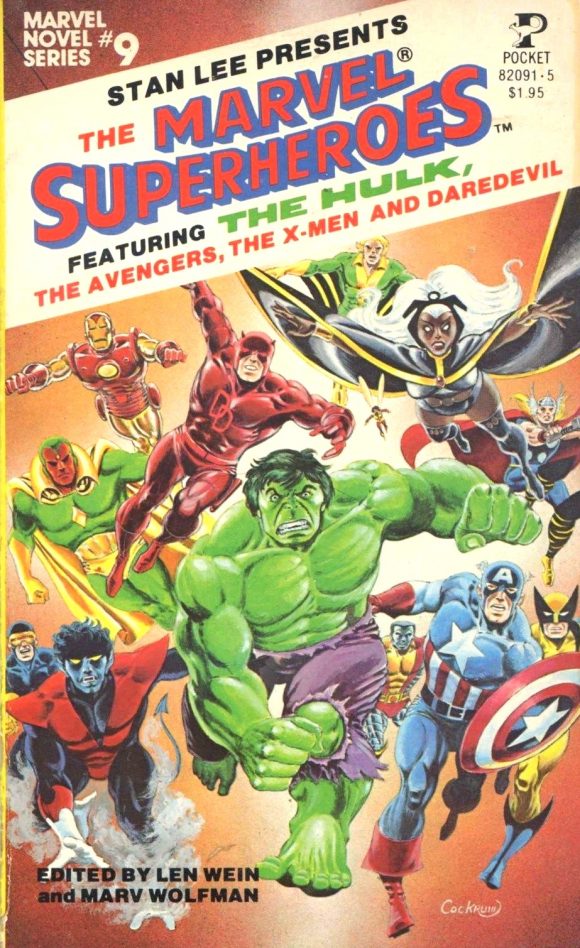 Buck Rogers In the 25th Century, “Happy Birthday, Buck” (NBC, Originally Aired Jan. 10, 1980). I think Marty always had his eye on writing for movies and television. This might have been his first TV show. 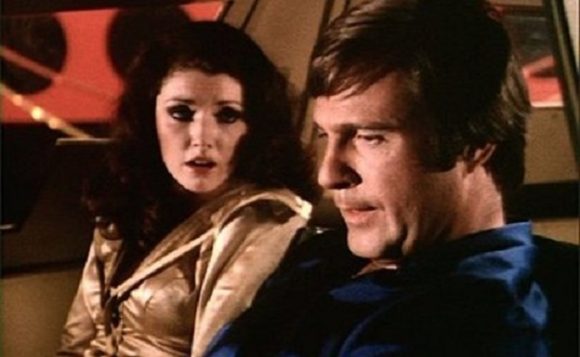 Destroyer Duck (Eclipse, 1982). Marty the activist, contributing “Gimme my Check!” to Steve Gerber’s “Special Lawsuit Benefit Edition” comic book to raise funds for his legal battle with Marvel Comics over the ownership of Howard the Duck. This back-up tale, featuring art by Joe Staton and Scott Shaw, is a fictionalized version of what’s likely an apocryphal story to begin with of an incident of editorial cruelty committed by Robert Kanigher. 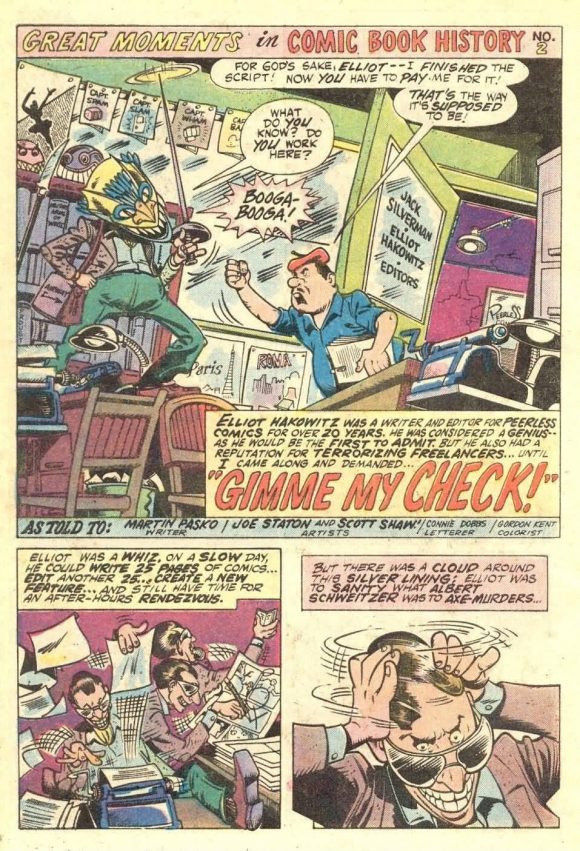 E-Man (First Comics, 1983). When Joe Staton took his 1970s Charlton Comics creation to First Comics in the 1980s, writer and co-creator Nick Cuti wasn’t available, but Marty was a wise choice as replacement. He brought sitcom pacing to this wacky action-adventure strip, a fact I was able to study up close as I dialogued several issues of the book over Marty’s plots. 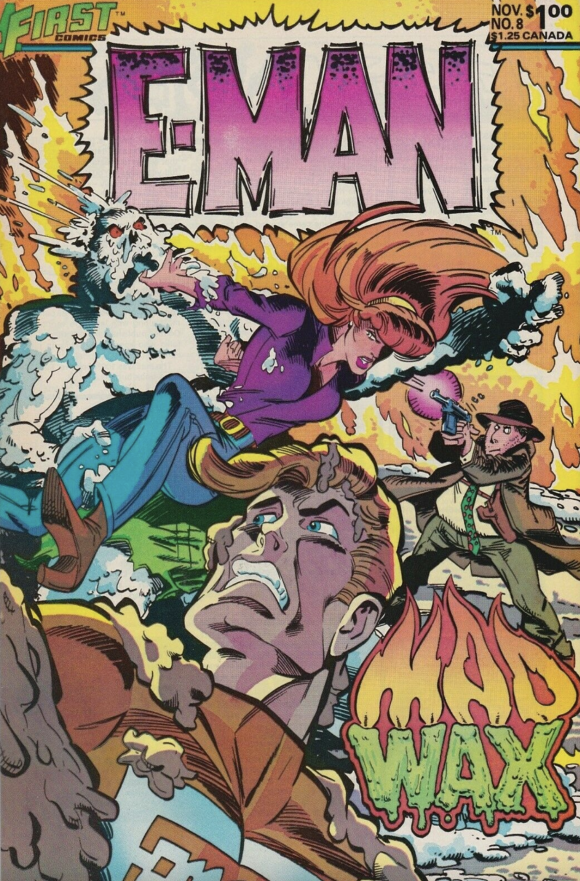 Simon & Simon “Ain’t Gonna Get It From Me, Jack” (CBS, Originally Aired Nov. 5, 1988). Marty did a nice send-up of the outrageous and ever self-promoting trash TV host Morton Downey Jr., on this long-running CBS drama. The one thing I took away from Marty’s Simon & Simon experience was that Gerald McRaney was the nicest person on television. 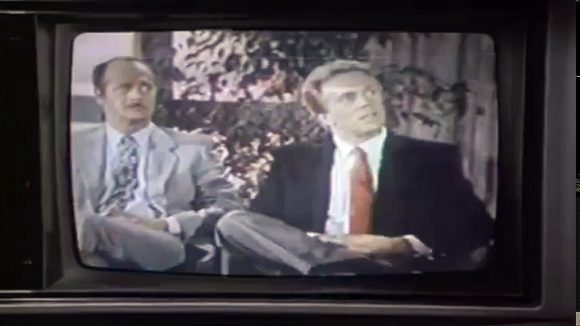 Roseanne, “Somebody Stole My Gal” (ABC, Originally Aired Oct. 3, 1989). The Pasko take away from Roseanne? Roseanne Barr was the worst. Roger Rabbit #10 (Disney, March 1991). Combining Marty’s love of comic book scripts and screenplays in “The Case of the Tuned-In Toons,” with art by Rick Hoover and Jose Marzan Jr. Cadillacs and Dinosaurs, “Siege” (CBS, Originally Aired Oct. 9, 1993). Marty was proud of the work he’d done as both story editor and writer on this animated series, helping reshape the concept to make it more acceptable to CBS’ standards and practices. OnStar Batman Special Edition #1 (DC, 2001). Why the hell would Batman need OnStar installed in the Batmobile? That was the kind of story logic thread one could not pull at in licensed publishing, for fear of losing multi-million-dollar contracts. DC partnered with GM in 2001 on a multimedia Batman/OnStar campaign, requiring the creation of everything from online animations (if you ever meet artist Rodney Ramos, ask him if he had fun on the project and watch his brain explode) to promotional comic books. As senior editor in charge of special projects, Marty oversaw those creative endeavors. He also scripted the animations and, if memory serves me (I was an editor working under Marty at the time), this comic, which featured art by Joe Staton and Ramos.