The writer, who is leaving his best-known title, Nightwing, talks about the book that intrigued me the most coming out of Image Expo — about a unionized group of superheroes. 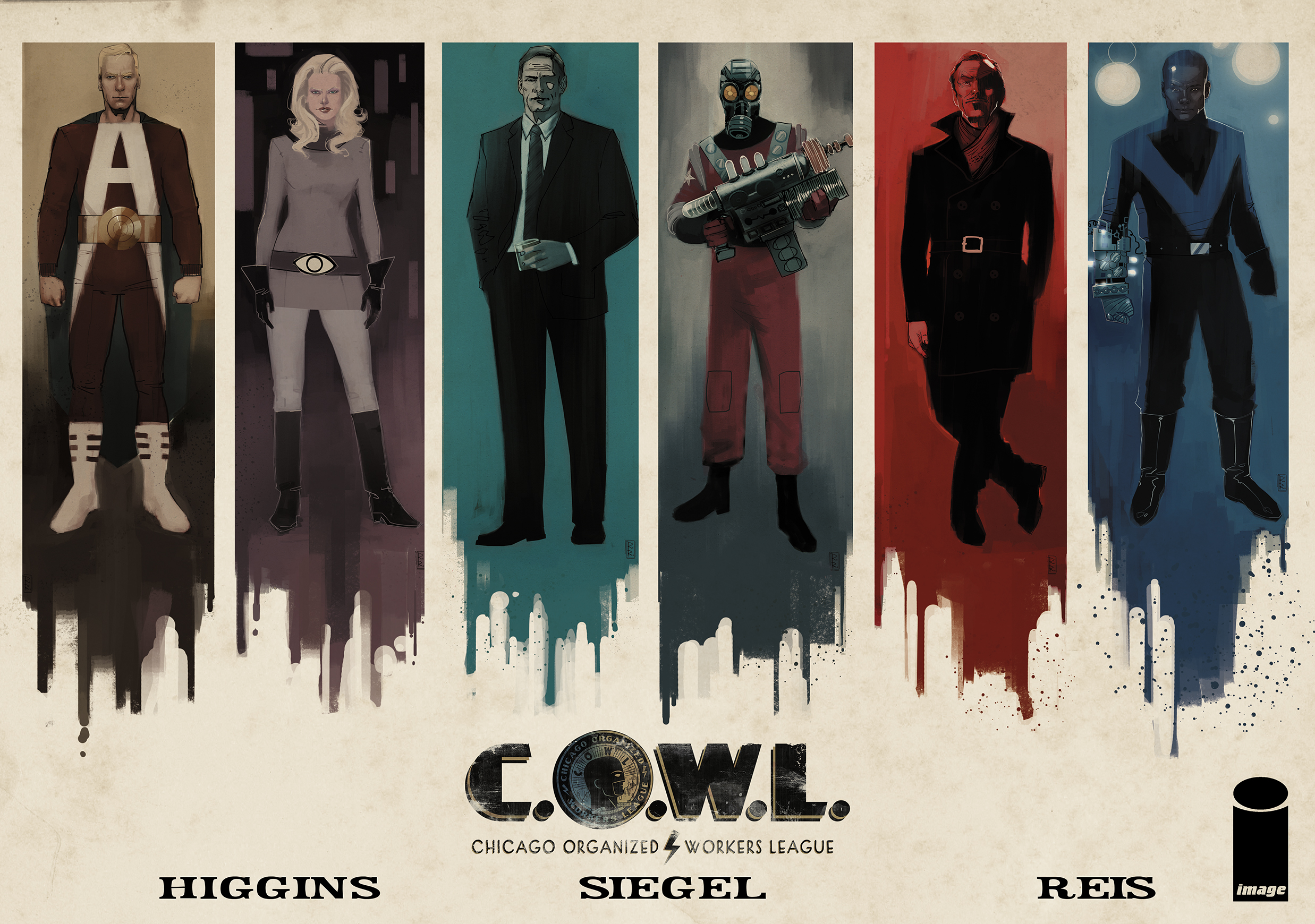 For those who haven’t seen the announcement, describe what C.O.W.L. is.

C.O.W.L. is about the Chicago Organized Workers’ League of the 1960s. It’s a book about the country’s first superhero labor union. The heroes who run it, the villains that fear it, the city that questions it, and the citizens it protects. I’ve been describing it as Jimmy Hoffa’s “Mad Men” … with superheroes. 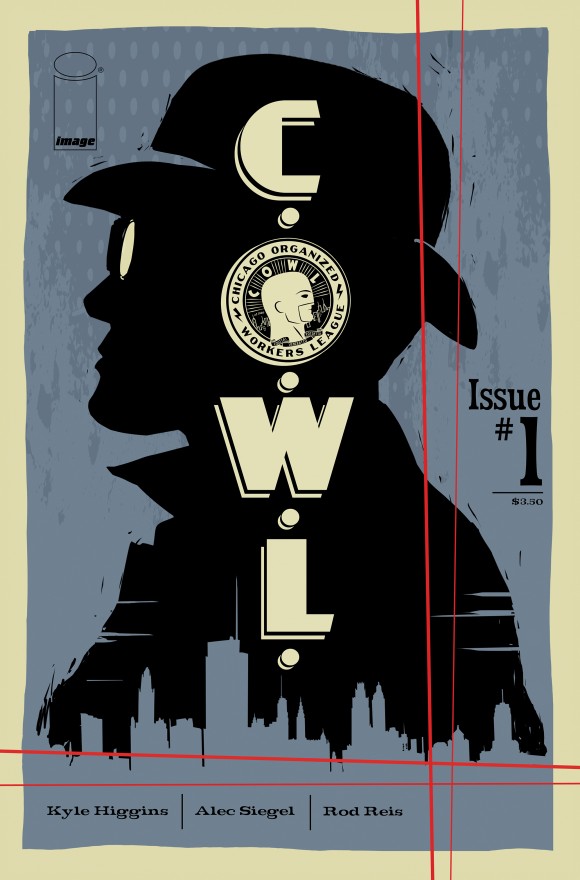 Well, (co-writer) Alec (Siegel) and I are both from Chicago …  and we always love telling stories in our hometown. But truthfully, it comes out of the decision to set the book in the 1960s. Stories from the past always carry extra weight for me, and with something like C.O.W.L., I find it helps ground the “fantastic.” I think it’d be hard to say “modern-day superhero labor union” without the book sounding like a tongue-in-cheek comedy. But setting an organization of superheroes in a time period when labor unions were very topical, in a city with huge political baggage, and the country’s lines of morality starting to blur? I think the concept becomes much more interesting. 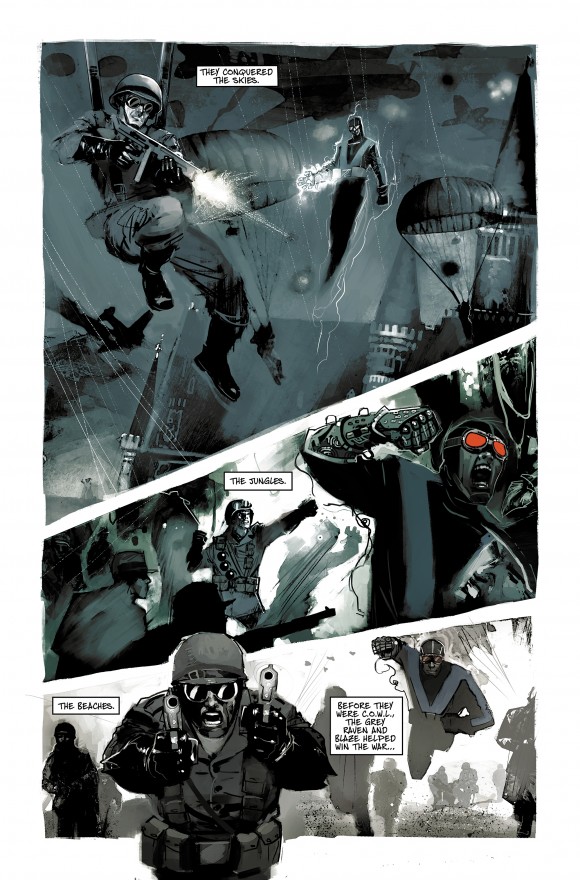 I’m aware that this project goes back years for you. Tell us the genesis of the project, all the way from the beginning.

It started during my junior year of college, when I transferred to Chapman University. I needed a writing sample, in order to transfer into the film production program, and the idea of career superheroes made me laugh. Six months later, I sound-designed this horror thesis film my friend Bobby Glickert made, which got me thinking about what my thesis film would be. Bobby’s project stood out from the other films that year, in both its scope and production value. Like Bobby, I knew I wanted to make something that could be a calling card … something different that combined all the different passions of mine. Superhero films are actually what got me into movies as well as comics. Donner’s “Superman,” Burton’s “Batman” … I grew up on them and found other movies and comics as a result. I even started making costumes and filming my own stories with my dad and sister —  we were really young (laughs) — because of them. So for me, it made sense to go to the superhero well. The other thing that happened at that time were the emergence of fan films like “Grayson” and “Batman: Dead End.” I looked at those and thought, “I could do something like this … but with my own characters. My own world.”

So, I went to Alec … who is one of my best friends from high school. We co-wrote the script, I shot the film over a couple months, cut it together and sound-designed it, my friends Mike and Josh Grier handled all the visual effects, and Joe Clark wrote the score. A year later we had a twenty-seven minute film that opened a lot of doors. And now … we’re reinventing it as C.O.W.L.

For anyone interested, they can see a trailer and buy “The League” here. 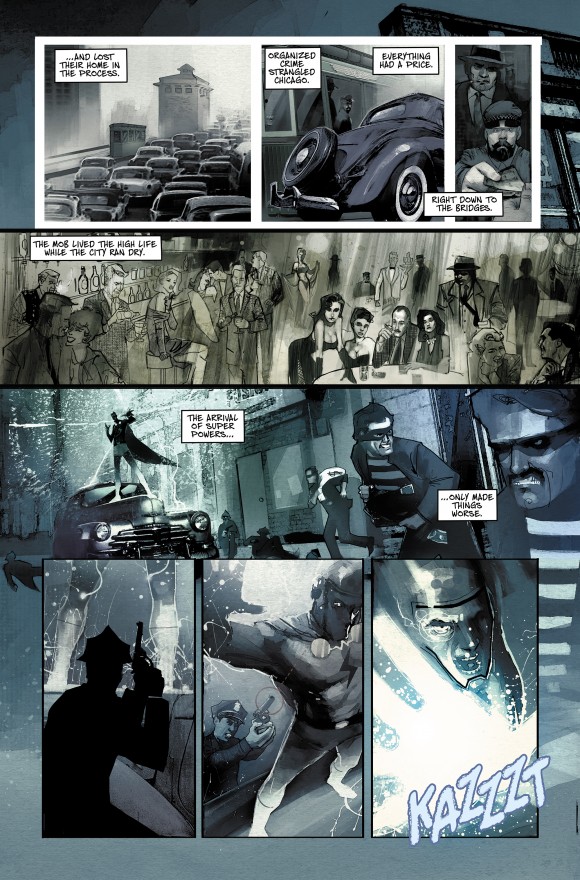 Is this an ongoing, a mini, a mini that could end up an ongoing … ?

Tell us something about each of the main characters.

Geoffrey Warner, the Grey Raven, is our main character. He’s the primary founder of C.O.W.L. and as we’ll see in the series … has a lot of plates to juggle. He hung up the Raven costume some time ago, but there’s definitely a part of him that wishes he were still patrolling the streets. Radia, Arclight and Blaze make up our “trinity.” They’re the three heavy hitters of C.O.W.L. as well as the public face (in addition to Geoffrey). John is a primary member of the investigations division, Eclipse and Grant Marlow work in patrols … it’s a big cast (laughs). But that’s why it’s an ongoing series. Each person represents a different point of view on the organization. And that’s not even counting the non-superhero characters. 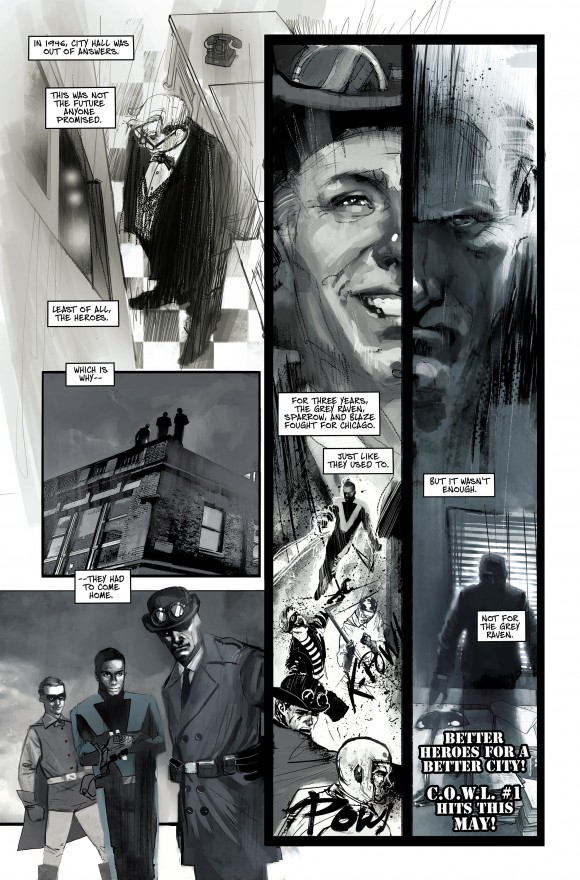 Tell us something that would surprise us.

C.O.W.L. #1 is scheduled for a May release, with unbelievably gorgeous art by Rod Reis.