MEGO’s Groovy Vehicles Were the Hottest Wheels of the ’70s

TOYHEM! No one had cooler rides than the World’s Greatest Super-Heroes…

When I was a kid, the only Mego superhero vehicles that mattered to me were the ones you saw on the Batman TV show — the Batmobile, the Batcycle and the Batcopter. To me, that was the only fleet Batman needed, other than a Batboat, which, sadly, Mego never produced. 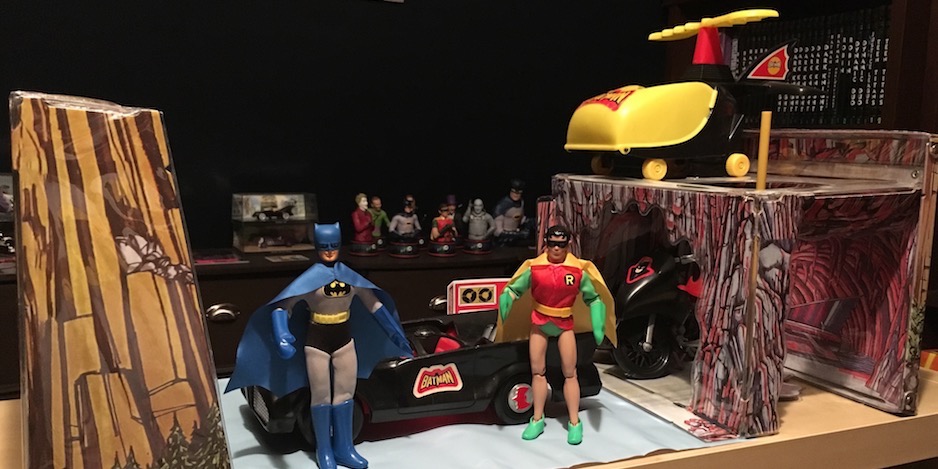 Except there was one ride I became aware of later that became an all-time grail item — though I’m saving that story for tomorrow. (UPDATED: Click here to check that out!)

In any event, I was also unaware until later that other heroes had dragsters of their own — Spider-Man, Captain America and Green Arrow. Like the comics’ Spider-Mobile, you can debate the merits of Spider-Man needing a car when he can swing through Manhattan (though I suppose it would make it easier to chase villains into the more suburban areas of the outer boroughs). But such pedanticism aside, it’s still mega-cool that Mego gave us one, complete with working web catcher.

Anyway, I could go on about these but why should I when I don’t own a single one? Instead, 13th Dimension regular Scott Tipton is the proud owner of all three. Here, he takes you on a TOYHEM “showroom” tour of Mego’s hottest wheels of the non-Bat variety. 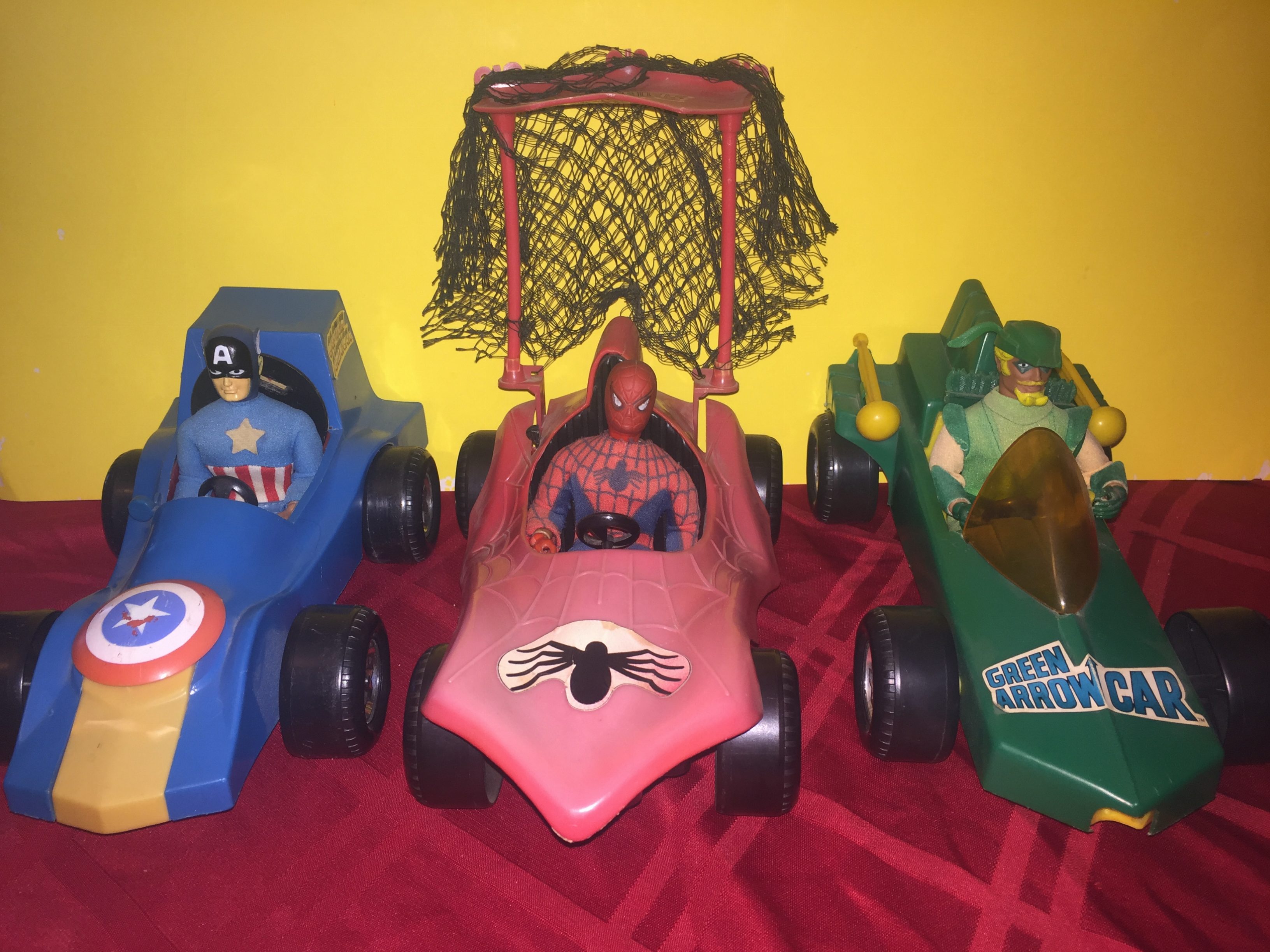 When I think back to the Good Old Days of toy collecting (meaning when I was, like, 8 years old), the thing that strikes me most is how we would find out about upcoming toys, back in the days before the internet.

For the Star Wars and Mego generation, information would be culled in one of three ways, all of which these days are as extinct as the dodo: Once a year at the holidays, you’d get your Sears and JC Penney wish books, with those fat 25 or 30 pages of toys in the back. If you were lucky, your larger toys, like, say, a Millennium Falcon or a Hall of Justice, would come with a mini-catalog from the manufacturer, showing you all the toys in that year’s lineup. But the most frequently encountered news source would come in the pages of your comic books, where practically every month you’d find a full-page ad from the legendary New Jersey retailer Heroes World. 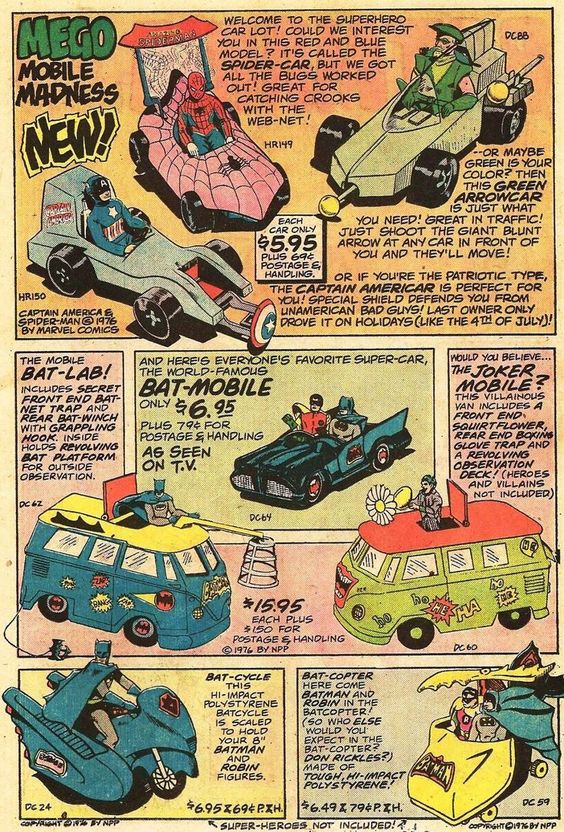 And it was here where I first learned of the existence of Mego’s greatest original creations: the Spider-Car, the Captain Americar and the Green Arrowcar.

Not long after the first time I saw the comic-book ad, I recall a visit to Toys R US where I saw, up on a high shelf (or at least it seemed high at the time) a row of orange rectangular boxes. There it was! It was real! The Amazing Spider-Car! I think even my mom realized that this was a rare find, because there was no need to argue or plead — that Spider-Car was coming home with us. 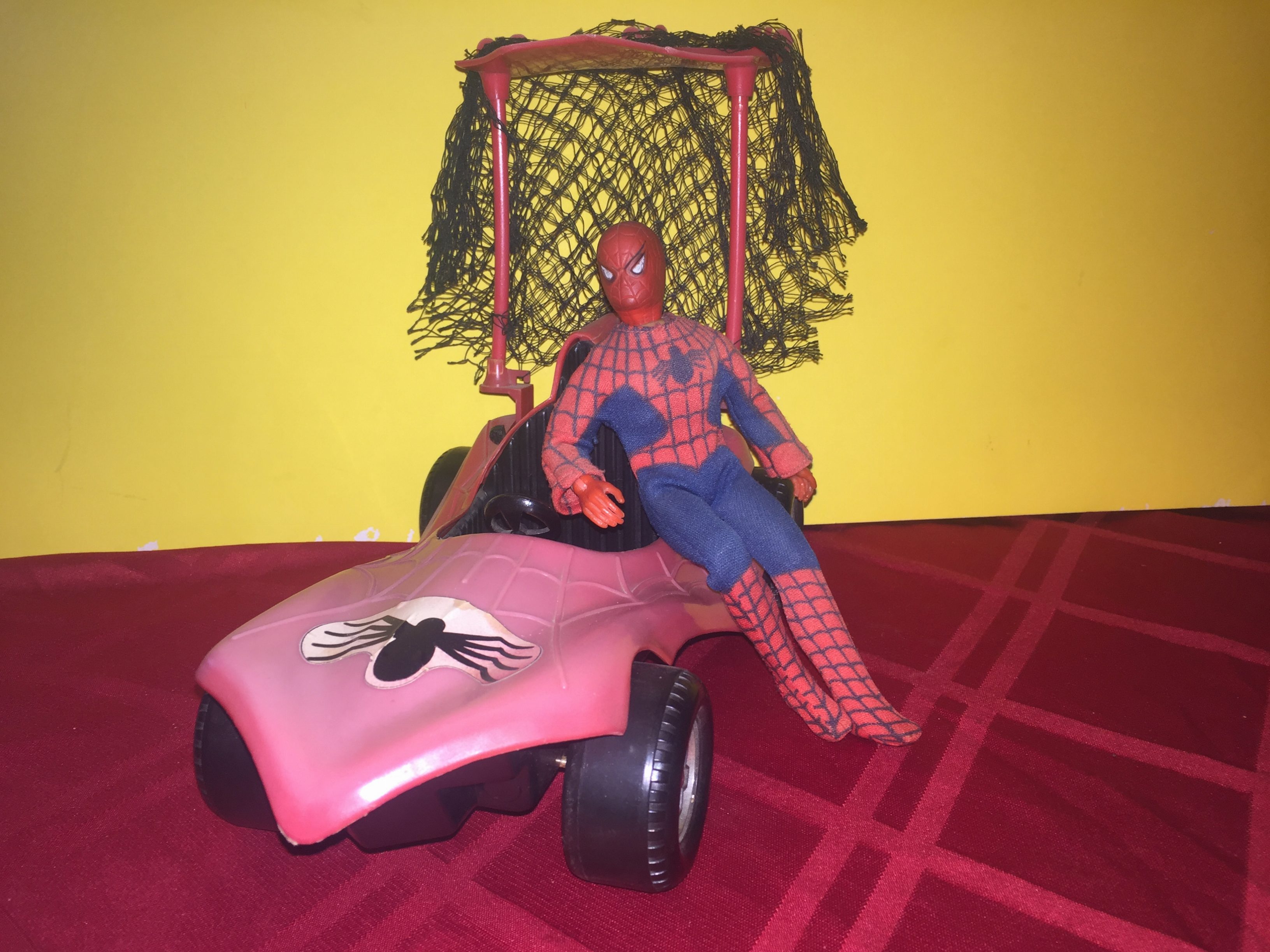 As the Mego Spidey was already my favorite toy — the Woody to my Andy, if you will — the Spider-Car immediately took up a place of honor in my room. And how could it not?  Just look at those lines, that sweet styling, the dune-buggy wheels — not to mention that action feature: the pull of a lever that would drop down the spider-web capture net on a tailgating villain. This was action-figure perfection. And Spidey just looked so damned cool behind the wheel.

Over the years, I never stopped looking for the other two cars, but never saw them in a store. Like, ever. To the point that I actually wondered if they’d ever really been released. That is, until about three decades later, on an early Sunday morning before the doors opened at San Diego Comic-Con, when I was taking advantage of my exhibitor’s badge to wander the aisles before the crowds rolled in.

Passing a booth, I froze in my tracks at the sight of … a Mego Captain Americar! No box, but that hardly mattered. It was real, and it was right there in front of me. Even the spring-loaded shield-shaped battering ram was still operational. After the quickest cash transaction known to man, the Captain Americar was safely tucked away in my backpack, and not long after triumphantly parked next to my Spider-Car, my childhood Mego Cap behind the wheel. And he looked pretty damned cool too. 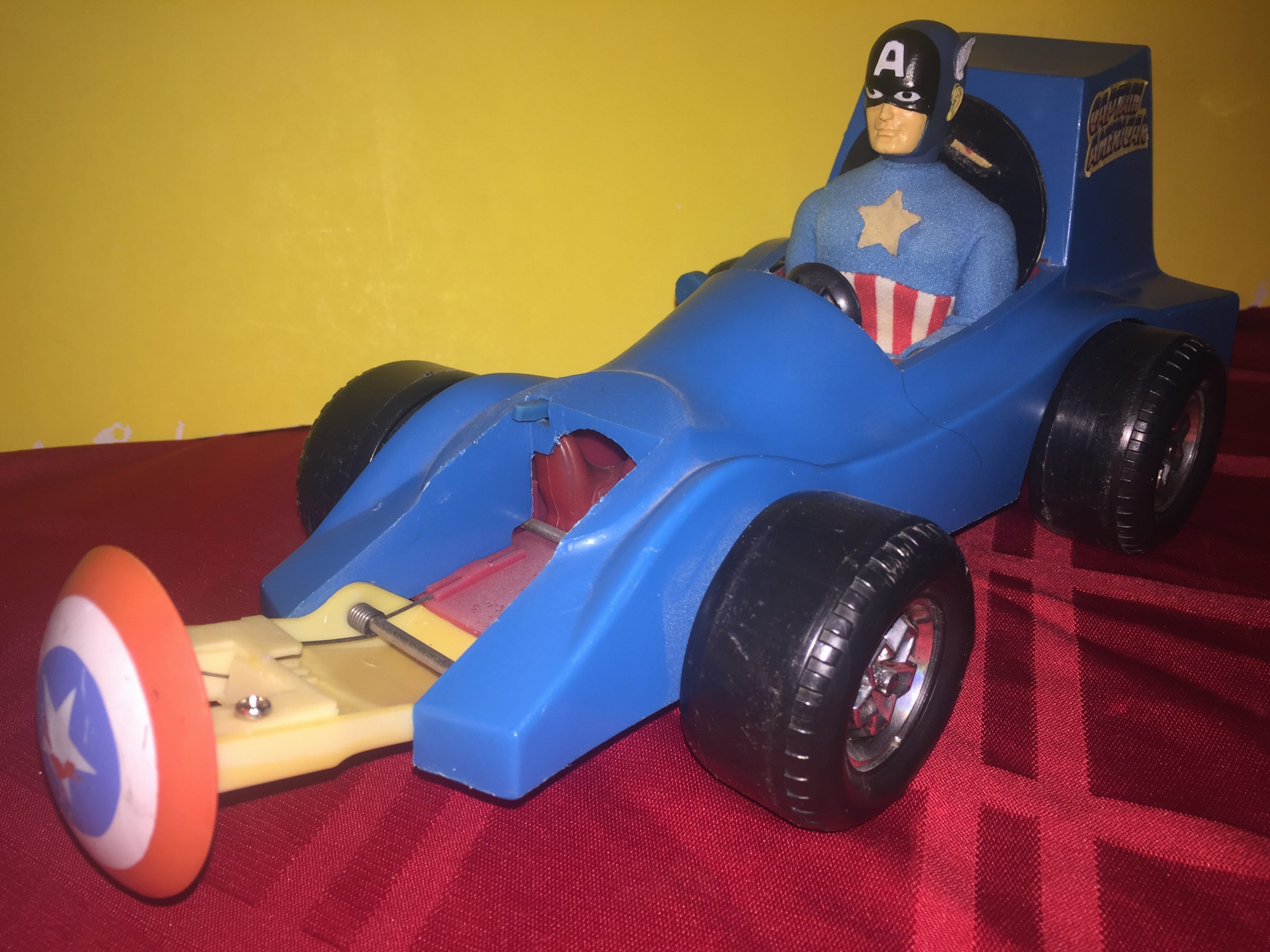 As for the Green Arrowcar, it eluded me for another 15 years or so, until one Christmas morning I discovered it under the tree, a marvelous gift from someone who obviously knows me far too well.

It too lacked the original box, and once more I couldn’t care less. It was in amazing condition, with a clean front label and even the original orange windshield, which is nearly impossible to find intact. 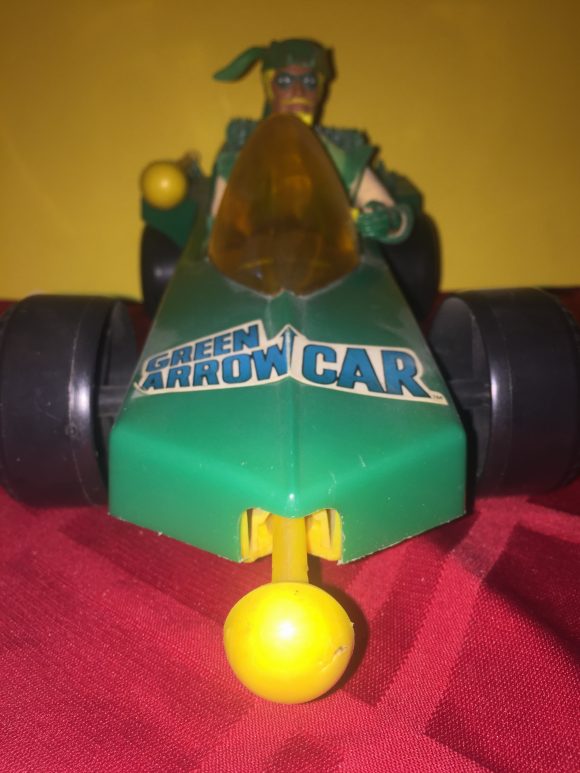 Even more miraculously, included were both original “arrows” designed to be launched from the Arrowcar’s hood, a delicate spring-loaded operation that somehow remains functional despite being constructed of brittle flimsy polystyrene. It’s a bit more streamlined than the blockier Americar, so streamlined in fact that I soon discovered that my childhood Mego Green Arrow couldn’t even slip behind the wheel without taking off his giant clunky boots (though I was relieved to see that his huge quiver did manage to fit in the driver’s seat). 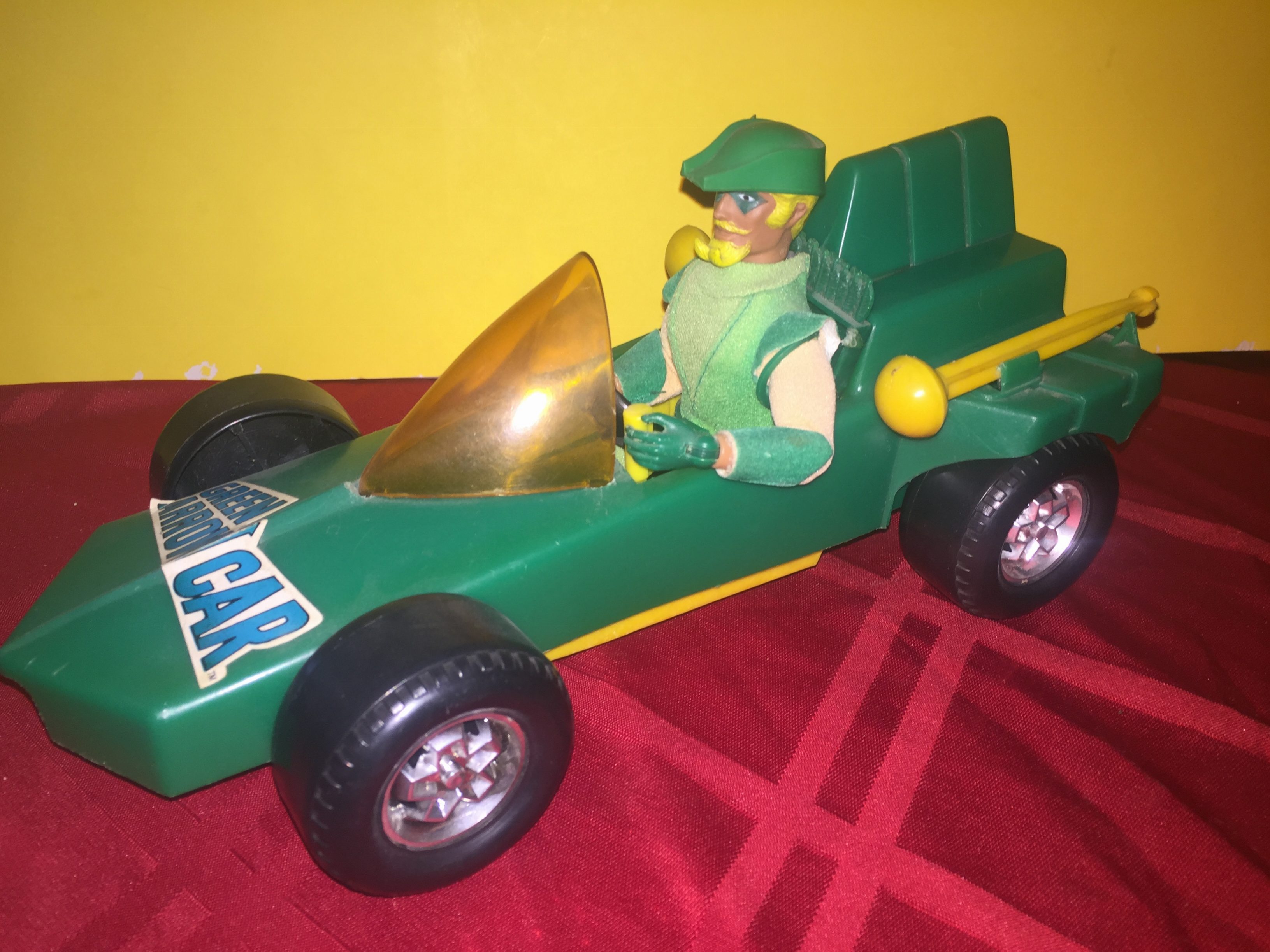 Of the three, the Spider-Car is still my favorite; not only because it’s inherently the best-looking model, but also because it’s been with me so long, over four decades. But every time I walk through my library to get a book and see those cars parked side by side on the shelf, I can’t help but smile and think about the time all three were nothing more than sketchy lines on the page of a comic-book ad, and a crazy hope that maybe — just maybe — someday I might see one of them.

Scott Tipton is a Contributor-at-Large here at 13th Dimension, and a writer, copy editor, proofreader and self-styled comic-book historian elsewhere. He has been known to collect a toy or two.

— The Complete TOYHEM 2021 Index of Features and Columns. Click here.