The author of one of the most anticipated new titles of the fall gives insight into his creative influences. 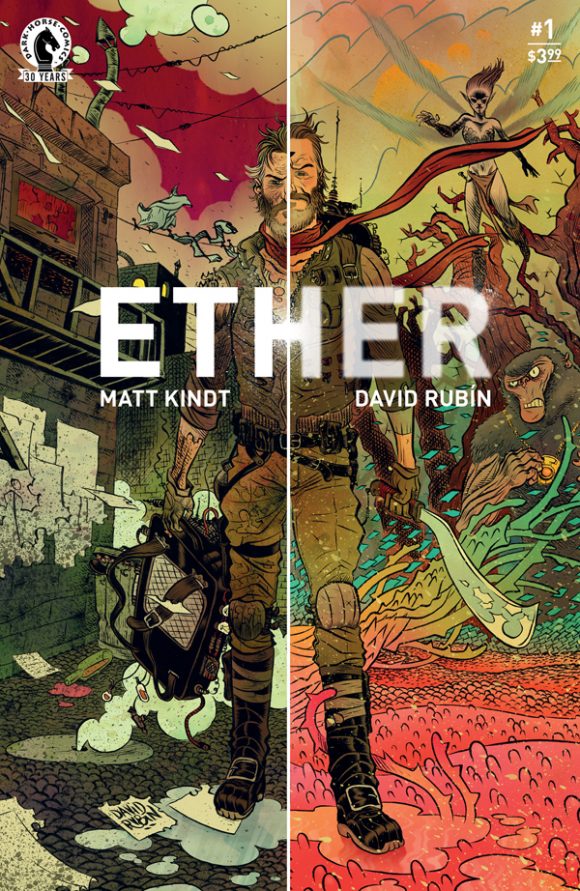 Matt Kindt (MIND MGMT, Dept. H) and David Rubín (Battling Boy) are launching a new series at Dark Horse this week (11/16). It promises to be filled with mystery, science and magic. In other words, much of what makes fiction — and comics specifically — so great.

Here’s the official description in case you’ve been unawares:

Can science solve murder by magic? That’s the question at the heart of Ether the much-anticipated, creator-owned series by award-winning writer Matt Kindt (Dept. H) and artist David Rubín (Battling Boy) featuring magic bullets, purple gorilla gatekeepers, faeries, golems, a mystical portal and one science-minded adventurer who firmly disbelieves in the supernatural, despite all the evidence around him.

Boone Dias is an interdimensional explorer, a scientist from Earth who has stumbled into great responsibility. He’s got an explanation for everything, so of course the Ether’s magical residents turn to him to solve their toughest crimes. But maybe, just maybe, keeping the real and the abstract separate is too big a job for just one man?

Now, I’m fascinated by the creative process. Why writers and artists do what they do and how they do it. What drives them and what influences them. So here is Matt Kindt with his a list — 13 INSPIRATIONS FOR ETHER — including preview art for the first issue by David Rubín. — Dan: 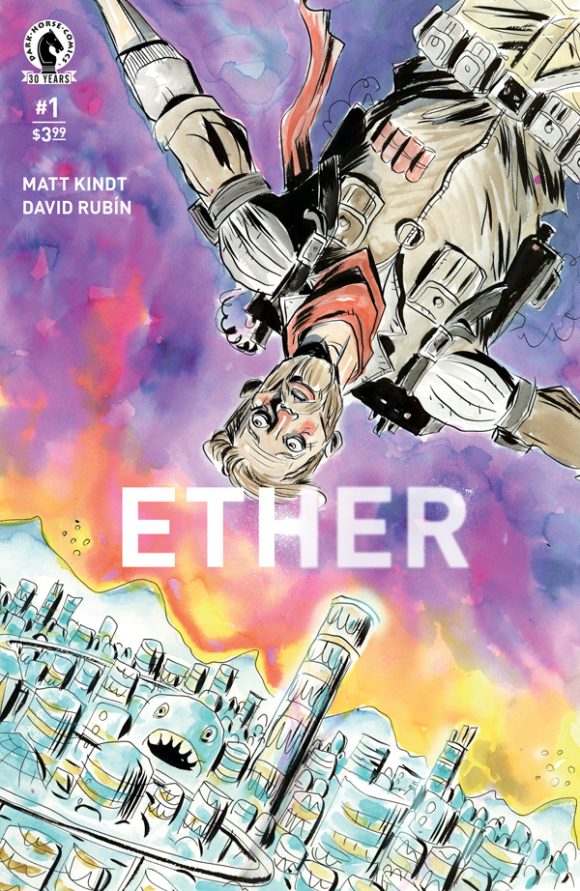 1. Sherlock Holmes. Since I was a kid, reading those stories, I was never really too interested in the main mystery of the story. What I loved the most was the initial meeting with Sherlock. The way he could examine a person or a pair of shoes or a hat and glean all of this personal information from small moments of examination. I loved how easily he got bored when he wasn’t learning something. Those are the kinds of things I was intrigued and inspired by – as a person and as a creator. I love the answering of mysteries… but most of all I love the journey to discovery. The ‘how’ as much as the ‘why.’ And there’s something a little sadistic in me that loves pitting the most rational and scientific character ever against a world of magic faeries, hyper-intelligent birds, and purple-ape-gatekeepers. How does the logical mind deal with that? And that is the real heart, the real fun of watching Ether play out on the page.

2. Vladimir Nabokov. His use of language. Maybe the most superficially pretentious influence – but seriously. Everyone should give him a read. Between Pale Fire and Lolita – his creative use of language – it’s so amazing it’s invisible the first time you read it. You kind of sense that he’s doing something amazing and then the second time through you get yours eyes opened. Reading the annotated Lolita is highly recommended. I love word play and etymology and he’s a master. He and Tolkien really fire my love of language and words and myth. 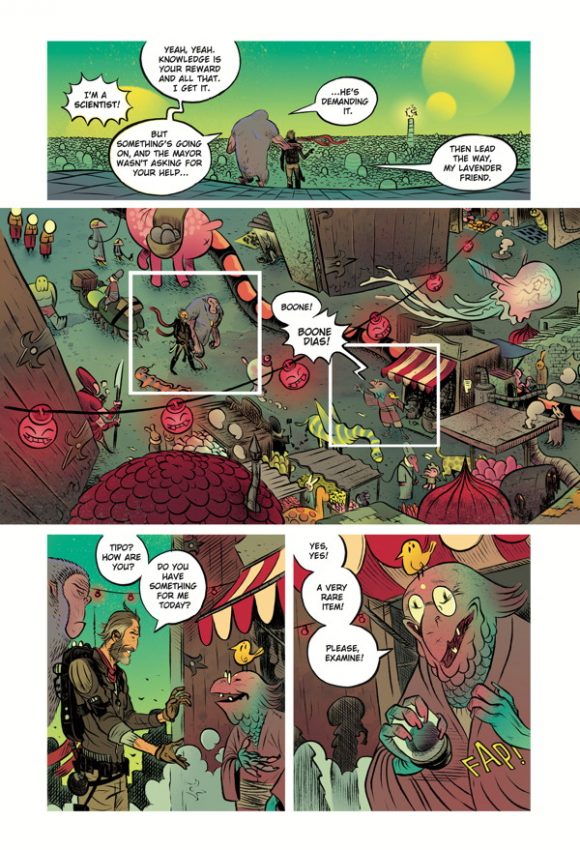 3. Sandman. The gold standard in comics as far as creating a sandbox to play in. I think reading that when I was younger was entertaining and actually educational. And now, as I’m older I appreciate it as a creator in a different way. Gaiman was able to build a framework and a narrative vehicle that would allow him to tell any story he felt like telling and it would all fit together and be of a piece. That’s my goal on larger projects like MIND MGMT and Ether. Build a world that you can spend years creating. The reason you do that is because you’re always growing and getting older and learning. You never stop. I wasn’t the same person at the end of MIND MGMT that I was when I’d started three years earlier. But building a framework that is flexible but thematic allows you to grow and expand: Reading Sandman (or MIND MGMT), you’re reading the story but you’re also seeing the author grow and change and expand before your eyes. It’s a fun experience on both sides of it.

4. Percy Fawcett. Probably the most literal influence on Ether. The amazing book Lost City of Z details his explorations – and was really inspiring. It was fun to think about Earth as a more mysterious place – before it was all satellite mapped and measured. The mystery of places and people and things… that kind of thing is gone in a lot of ways from our planet now so writing Ether, I really wanted to capture that – the sense of wonder over new places and people and things…

5. Philip K. Dick, writer/Leon Hicks, printmaker. I’ve probably put Dick on every list I’ve ever made like this. I’ve read more of his work than any other author. He encapsulates the things I love most in art and creators. And I had a printmaking teacher in college who was talking about the process of printmaking – which is a sort of ongoing one. You make your print and then apply the ink in different ways, collage things on it, try different colors – it’s really an infinite array of possibilities even after you’ve done your etching, etc. He would say this mantra over and over again…”movement and production.” Just keep moving, trying things, producing, over and over. It’s the same kind of idea, the same kind of creative work ethic that Dick had… that Jack Kirby had… you don’t get too precious about any one thing. The ideas… the creativity… the truth, comes from the work. From constantly thinking. From constantly working. 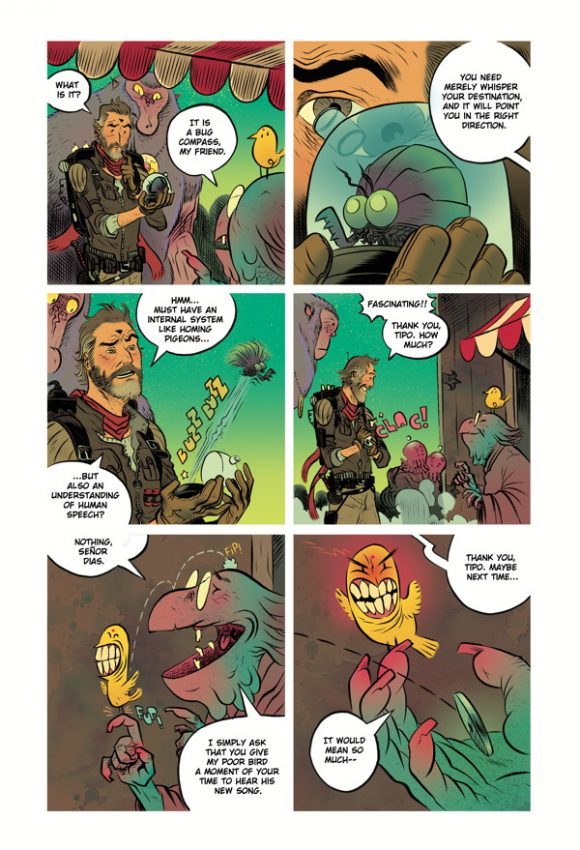 6. Greek, Roman, Mayan and Sumerian myths. I could go on and on. The Ether is really all myths and legends ever – but housed in one “world.” Everything we see in the Ether was created by humanity over its entire history. So a lot of ideas that are no longer believed… still have a place, and still exist in the Ether. I really like that idea of authors and writers and artists and the human mind being able to create worlds and ideas that can live somewhere. That’s really what magic is in real life. Words and language that put ideas and pictures into your head? That is the definition of magic. Shapes and letters and words are the spells. Ideas and fiction are the outcome.

7. David Rubin. Just look at his work! He turned in so many preliminary sketches – I have them hanging in my studio – all pinned to the wall like a crazy serial killer that’s targeting amazing designs. The tone of the book was so different in my head and written – but when he started drawing it – I watched it transform into this amazing fun and colorful thing that surprised me. It’s still got the heartache and heartbreak in it, but the way he coated the entire thing with his personality and style… it makes that bitter pill I wrote go down so much easier!

8. Stephen Hawking. Science over magic. Love putting that mind into a place filled with the unexplainable. 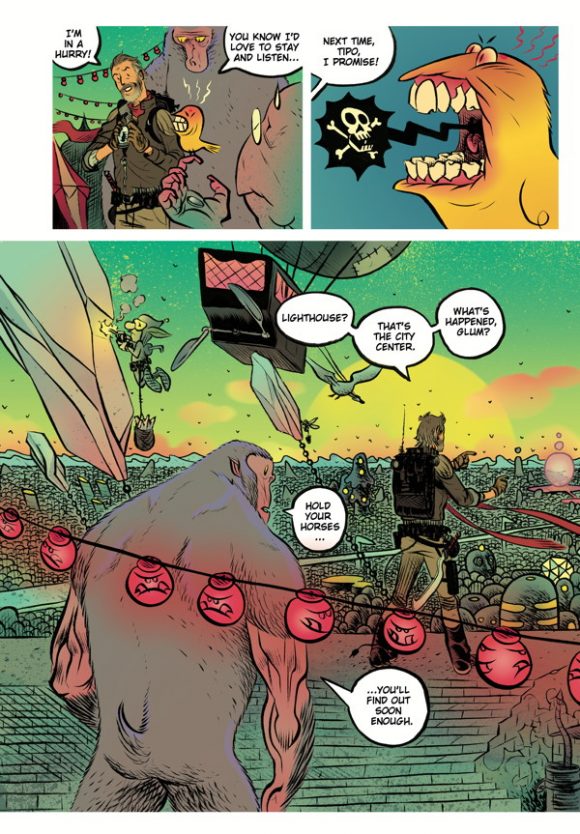 9. The Leftovers. Perfect show in every way and amazing handling of the supernatural. The opposite of our main character, Boone, who lives to explain everything.

10. Jonathan Strange & Mr Norrell, by Susanna Clarke. One of my favorite books. This is a perfect example of exceptions to my rules. I don’t hate magic in fiction and movies… it just needs to be handled well, like any genre. And she does an amazing job.

11. My family. Nothing gets done without this. It’s where inspiration, motivation and sanity all come from. 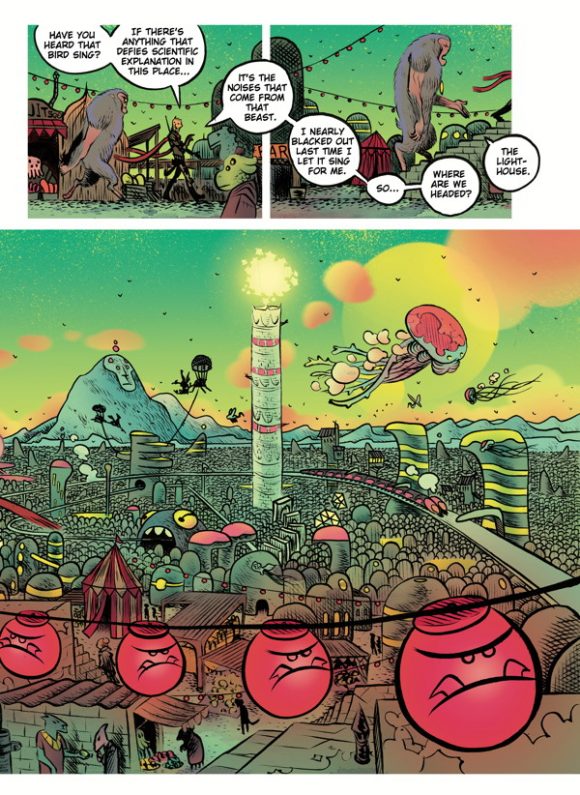 12. Twin Peaks. Come on! So excited for this to come back. And apprehensive. Still watch the old stuff once a year. One of my earliest inspirations and I still see echoes of it in everything I do. Perfect blend of magic and character and humor. Such a strange cocktail – nearly impossible to get that recipe tasting as good as this show does.

13. Kishi Bashi. I need to throw some music in here! I’m all over the place musically – and I listen to a lot of it while working but I haven’t gone to a live show in over a year. Went and saw him a few weeks ago and was amazed. If I’d seen him when I was younger, I’d still be playing violin rather than letting my violin sit around the house like a Sherlock Holmes decorating prop. I drive my wife crazy with this admission – but I don’t listen to lyrics in music. It’s terrible, because I can’t really tell you what any song is about. But on the flipside, I can listen to any and all music while I’m writing. What I react to in music is more visceral I guess. The sounds of the words. The beat. The tone. All of that feeds my work.