MARK GRUENWALD, His Ashes and Me

Home » COMICS HISTORY » MARK GRUENWALD, His Ashes and Me

The late Marvel editor is remembered by his widow, Cat Schuller Gruenwald, who is keeping his legacy very much alive. 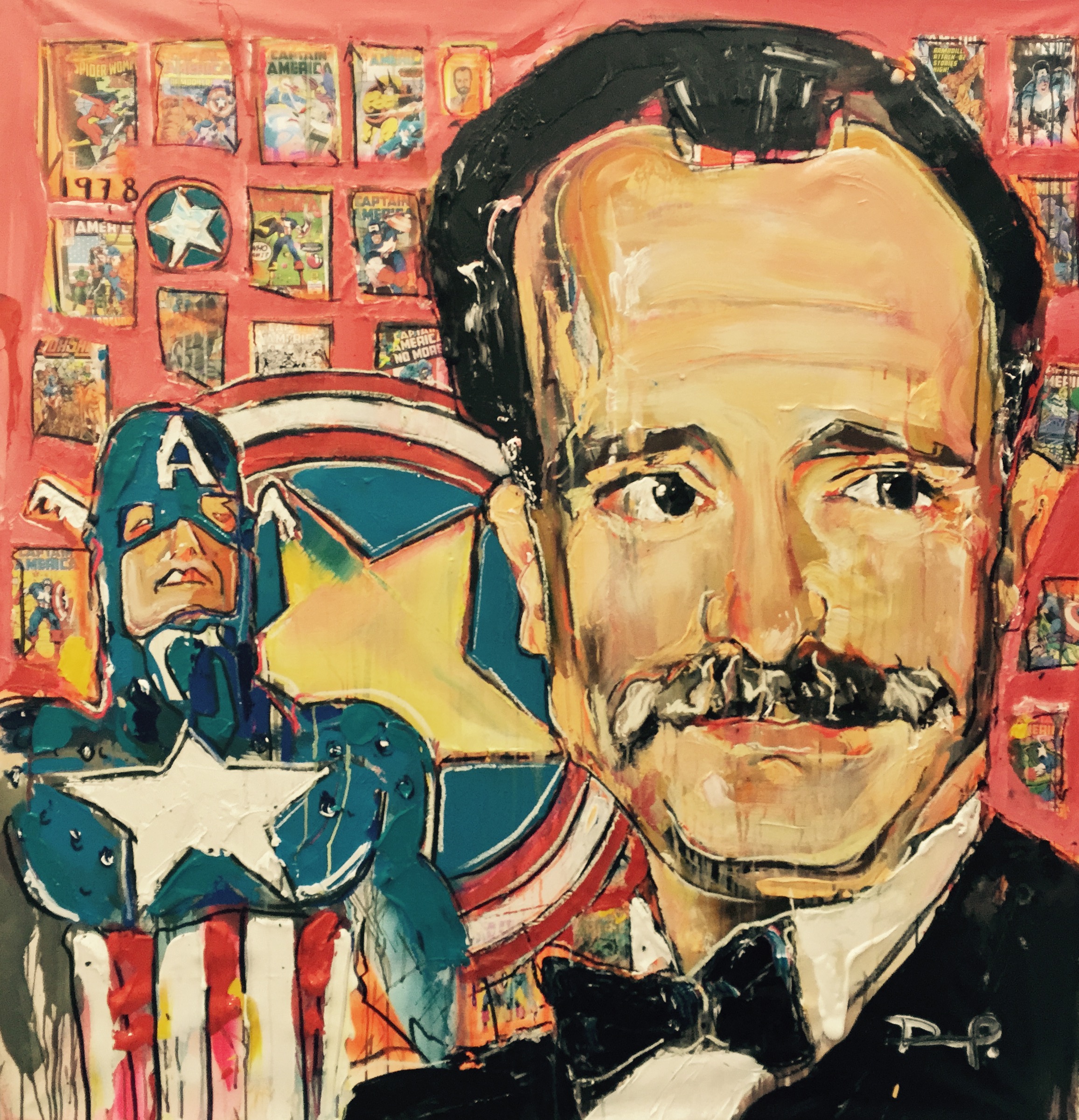 Marvel editor and one-man comic encyclopedia Mark Gruenwald is back in the headlines this week. On Wednesday, his widow, Catherine Schuller Gruenwald, sprinkled his ashes at the Captain America statue in Brooklyn — just as she sprinkled his ashes in the printer’s ink that produced a Squadron Supreme trade paperback two decades ago. (Read about that here.)

Gruenwald died 20 years ago today and I invited Cat to tell us the story of Mark’s ashes, the printer’s ink and Cap’s statue. She enthusiastically agreed — and added how she’s keeping Mark’s legacy alive today.

“We’re launching an auction of a painting (above) I commissioned by David Banegas that will raise funds for the Mark Gruenwald Scholarship for the Arts fund at his alma mater, the University of Wisconsin. Tom DeFalco, former editor-in-chief of Marvel during Mark’s career, is kicking off the auction by placing the first $5,000 bid,” she explained. (You can bid here.)

And she sent me a funny, moving remembrance of the man his friends called Gru… 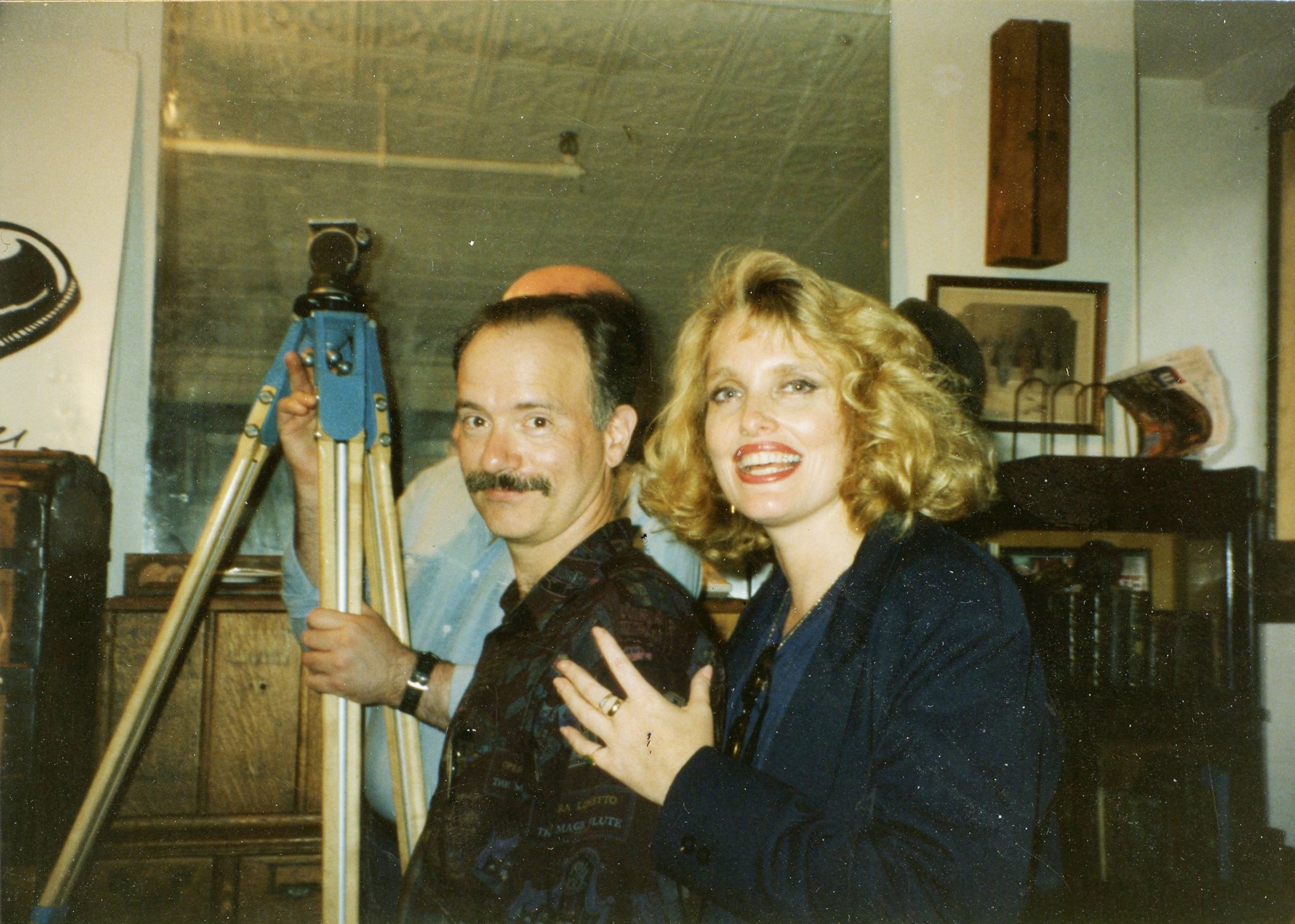 You know that vow you take when you get married? “To honor and to cherish, till death us do part”… well, not so much when you were married to a comic book prankster.

I have a relationship with a dead guy! I really do, I put myself into a state of mind regarding each appearance and I say, “What would Mark do that would make things just a little more interesting?” — whether that be creepy, cool or controversial.

The whole ash thing was a complete fluke when we wrote up our wills in 1992; he put in a direction to have me cremate him and put his ashes into a comic book. Yeah, yeah…that will never happen, I thought to myself. Little did I know, four years later I’d be doing just that. And Marvel cooperated and we did it!  I drove up to the plant in Connecticut and stirred the ashes into the ink that was used for Squadron Supreme, his best-selling graphic novel. That all happened between 1996-97. 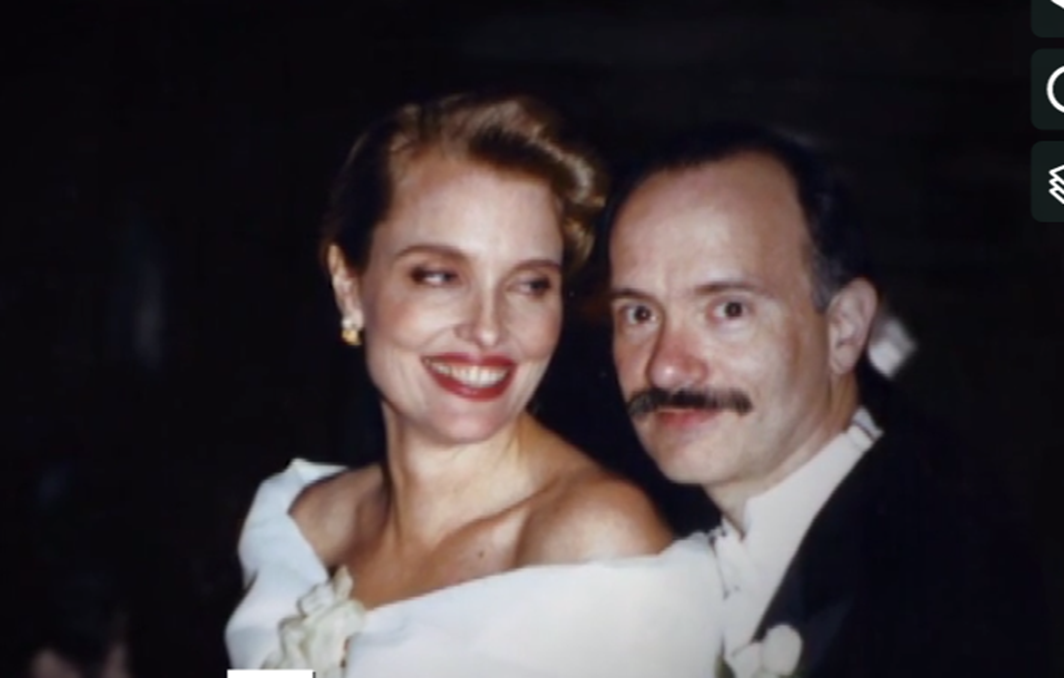 Flash-forward to 2016: It’s been 20 years since his untimely passing, and Captain America is more popular than ever, a fact that he would have loved seeing. Mark found making Cap relevant in a very unpatriotic time for Americans presented him with a myriad of options that made it difficult to keep him relevant and not “corny” in his undying convictions to preserve everything America stands and stood for.

So even though Mark’s ashes were in Squadron Supreme and not Captain America books, he wrote Cap longer than any other writer on the story to date. 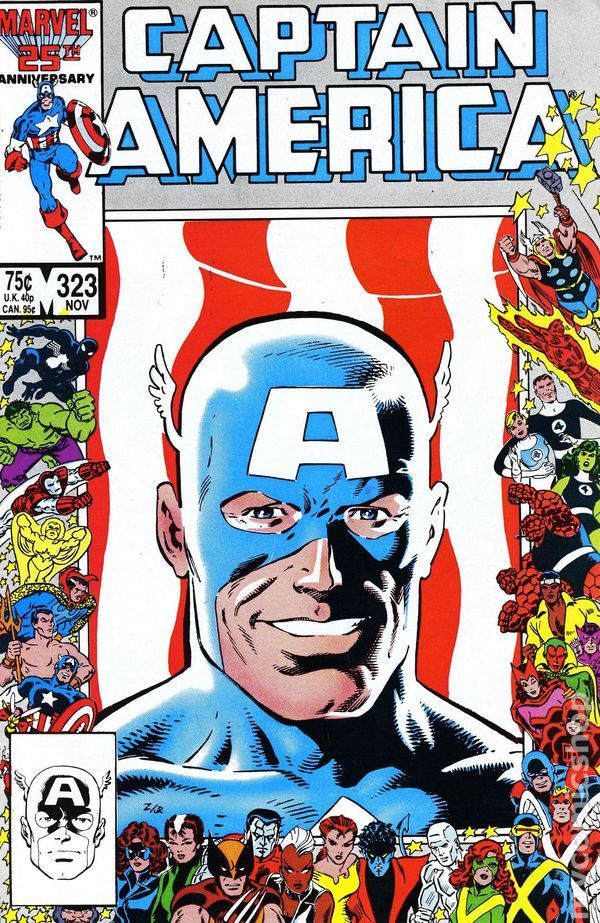 His legacy though, was of being a dedicated Marvel Entertainment Group executive (his initials were MEG — Mark Eugene Gruenwald ) and he was loyal to the end, even though the stresses were more than his heart and soul could take.

If you read Marvel Comics: The Untold Story you will get an indication of what the company was putting him through at the time and what I had to watch him suffer and ponder — bankruptcy, firing of his beloved colleagues, taking him off of Cap…. He tried to put up a noble front, but I knew it was taking its toll. It was a very sad time for him, but I want to remember him with his love for Marvel and for the great career he had there from 1978 through 1996. 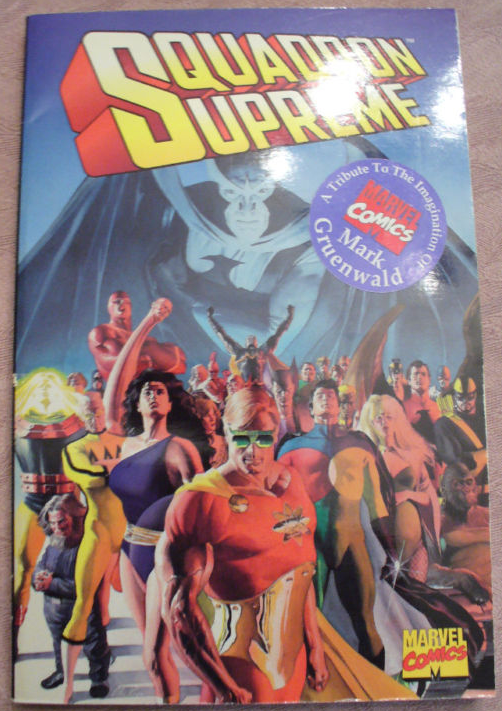 The ashes are symbolic and since he was always playing with alternate realties and cosmic portals and parallel universes, it would make sense that he would get a kick out of toying with people’s sentiments and literally wanting them to know he was a fan turned pro, wanted to do something no one had ever done before in comics, and make me the executrix of that wish. I say he put the TRICKS in executrix…

I also created another idea that I channeled through him called the Ash-o-graph: I’ve taken his signature, made a stamp out of it and mix ashes and ink, right in front of fans at conventions and store appearances. I then stamp a commemorative piece created for a June 14 Flag Day/Mark Gruenwald birthday tribute and up to five personal items with it. 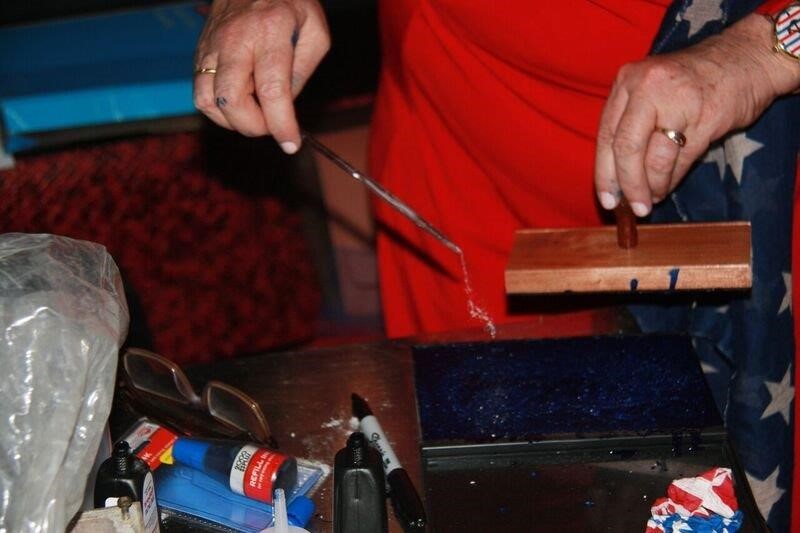 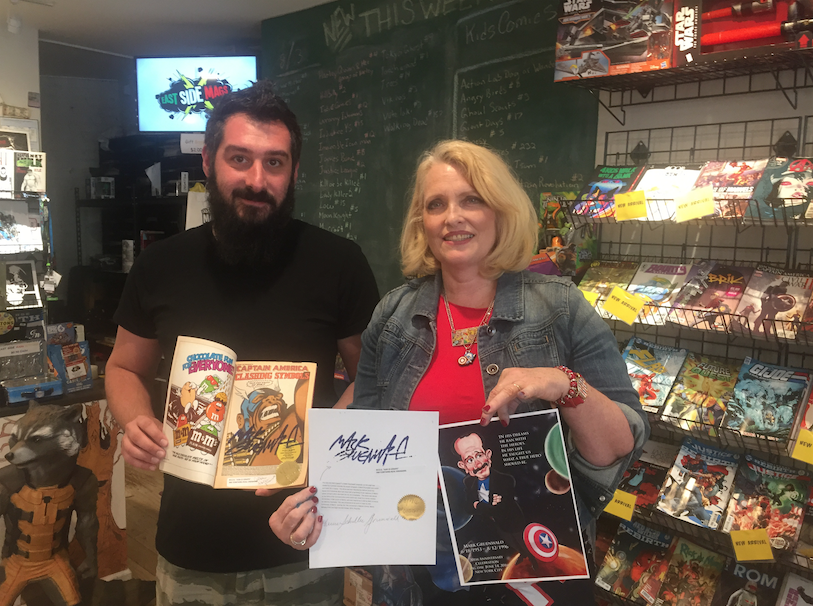 Jeff Beck, owner of East Side Mags in Montclair, N.J., and Cat

I am doing several comic-book stores this weekend in my hometown of Pittsburgh where I will be appearing at the closing ceremony of the Captain America exhibit at the ToonSeum. My schedule for the weekend is Phantom of the Attic on South Craig in the Oakland area of Pittsburgh, then the closing ceremony on Saturday night, and another appearance on Sunday afternoon from 2-5 p.m. at New Dimensions Comics at the Pittsburgh Mills store in Tarentum, Pa.

It just so happens, that it’s all been coincidentally falling on the very date 20 years ago of Mark’s passing — see what I mean about him being at the controls? I am just executing his string-pulling from beyond…

Cat added that she’s Ash-o-graph-stamping the back of the sketch/illustration that David Banegas did before he created the painting that will be auctioned for the University of Wisconsin. (“These ashes are getting around!”)

All of her appearances can be found at the Mark Gruenwald Facebook page (click here) and she’ll will be in Connecticut at TerrifiCon on 8/21 too. 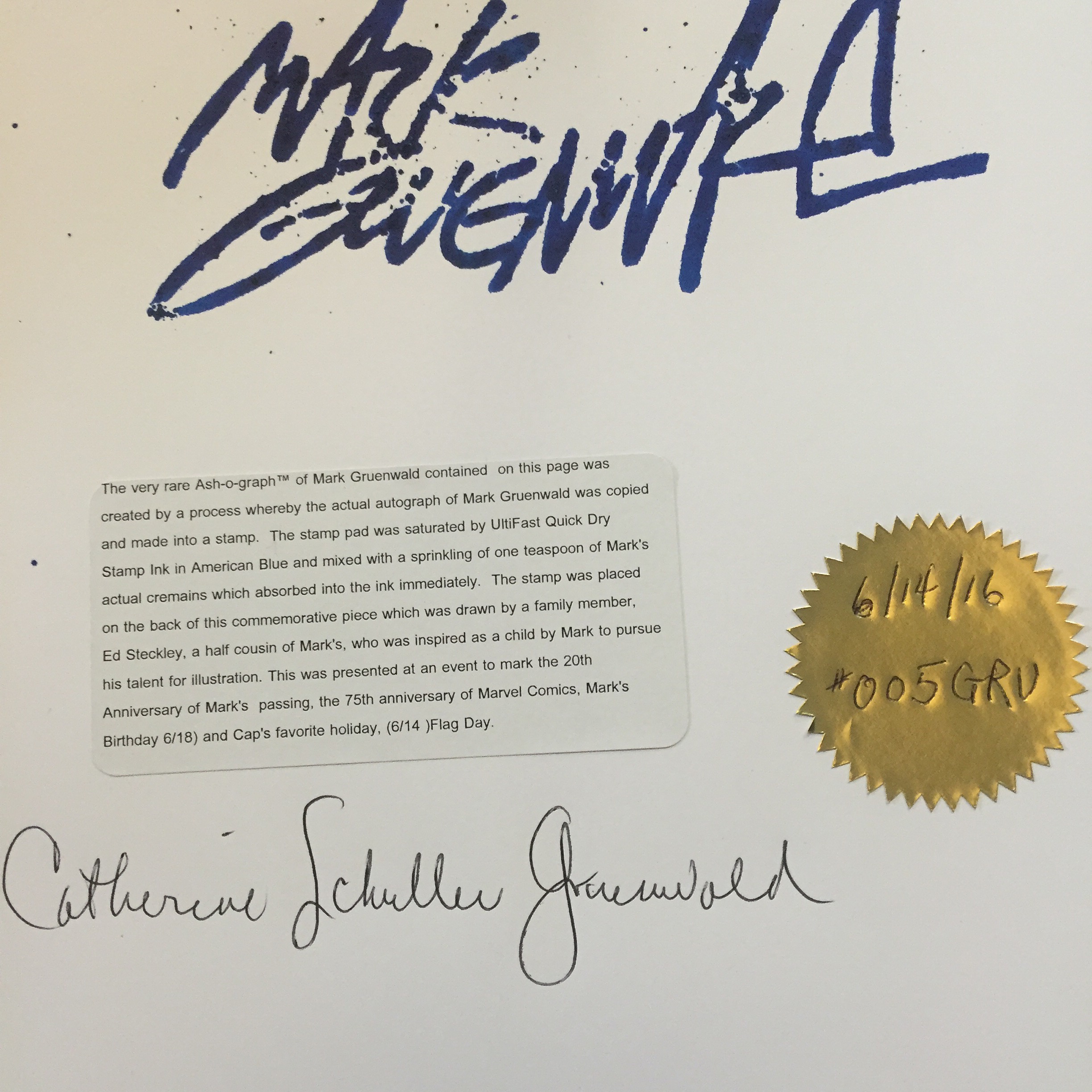