Looking Back at the Beginning of the NEW 52: Week 2

Home » COMICS HISTORY » Looking Back at the Beginning of the NEW 52: Week 2

Now that DC’s latest revamp is upon us, I reflect on my initial thoughts on the New 52 as the first issues came out — with comments on what I think now.

Way back in the dark ages before the arrival of 13th Dimension, I would email friends about comics and we’d gas back and forth. When DC launched the New 52, I took it upon myself to read each #1 and write mini-reviews of them all.

As it turns out, I saved what was essentially a protoblog. So now that DC‘s announced their latest linewide shakeup, I thought it might be fun to revisit those mini-reviews of every first issue of the New 52 — and look back to see what changed over time. (If you missed it, here’s the Week 1 round-up.) 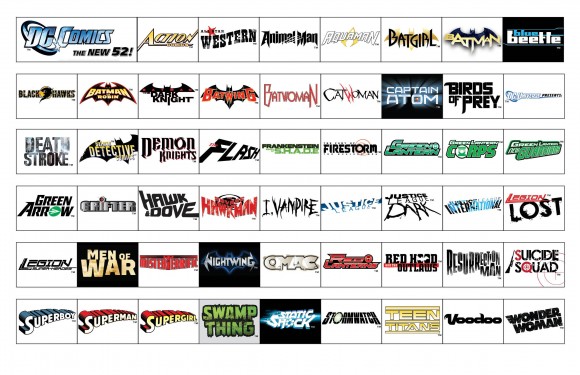 Here are the reviews, more or less as I wrote them. (I edited some for clarity, some for tone and some for length. The opinions are unchanged.) I also gave each book a Green, Yellow or Red light. I don’t know why I picked that metaphor.

Anyway, below each review I’ll comment in italics on how I see those books now — if they even exist. And feel free to let me know your thoughts!

Batman and Robin: This one will be a little long, so please indulge me: Dan DiDio recently suggested that among his worries about the New 52 is that they may not have gone far enough to reset Batman‘s world. He didn’t specify what he meant but it’s likely it has at least partly to do with having so many current and former Robins running around — Dick, Jason, Tim and Damian (plus Stephanie, I suppose). DC chose to stick with this scenario because Batsales have been healthy and they didn’t want to rock the boat. So, no return to, say, Bruce and Dick, or even Bruce and Tim. Instead of looking long term like they have with Superman, the Flash and some others, DC is sticking with what’s been working for the Batman titles for the last couple of years and that’s been Damian Wayne as Robin. 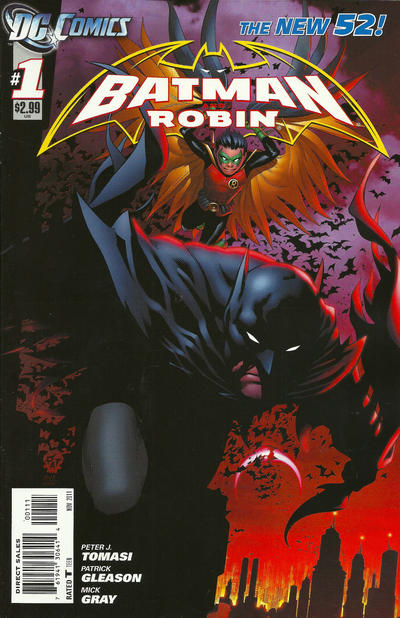 Now, on the face of it, that’s great. Damian/Robin is one of the breakout DC stars of the last 10 years. Grant Morrison introduced him into modern continuity as a fairly one-note, homicidal bastard and transformed him into a very proud, very scary, extremely competent Robin. Arrogant, yes. But also vulnerable. One of the great moments in the Morrison run is when Talia confronts Damian about his allegiance. Here’s the truncated version:

“Being Robin is the best thing I’ve ever done, Mother,” Damian says. “And even if my father does return, this is the life I’ve chosen to lead.”

“But from now on, Damian, you are no longer welcome here,” Talia counters. “You may consider yourself an enemy of the house of al Ghul.” 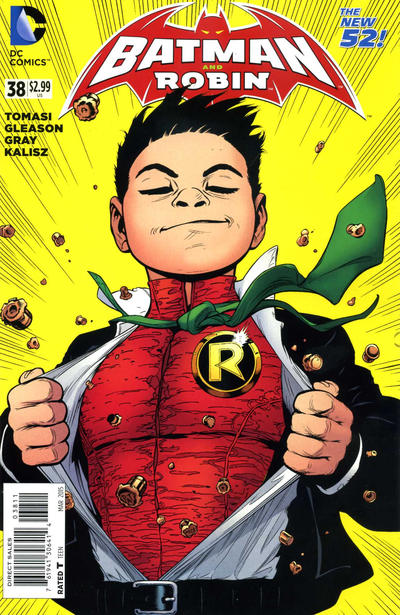 Which brings us, finally, to this issue and its inherent problem: In Peter Tomasi‘s hands, Damian doesn’t show the growth he showed in Morrison‘s run. He should be arrogant. He should be a pain in the ass. But he should not be an asshole.

And that’s the big knock. This book’s plot was fine. The villain OK. But if DC doesn’t want fans to start calling for Damian’s head — and reinstalling Tim as the true, modern-day Robin — they will have to fix this. Because if Damian doesn’t succeed, DC will have squandered a great opportunity to thin out the Robin corps in exchange for short-term gain. The book gets a green light because it’s a Batman book and that means I’ll give it a long leash. I also want it to work. But if this doesn’t get straightened out, I may be forced to vote with my dollars. Not a good start.

Liked the Batpoles though.

I take it all back. After a rough start, Batman and Robin‘s become my favorite Batbook. It’s been a brilliant mix of pathos and adventure. Great book by Tomasi, Pat Gleason, Mick Gray and co.

Batwoman: Best book of the week … until a surprise title stole its thunder. Art was downright gorgeous, which is unsurprising. JH Williams has been the main attraction where Batwoman‘s been concerned but I have had my doubts about his being able to follow Greg Rucka on the writing end. Yet he and W. Haden Blackman stepped right in and kept things moving. In fact, other than the awkwardly handled moment where Kate was alternately mourning Renee Montoya and setting up her date with Maggie Sawyer, I thought the book was breezier and more accessible than what Rucka was doing. So props there.

I was also relieved by Batman‘s appearance at the end of the book. My great beef about Batwoman has been that she hasn’t felt like a part of the Batfamily. I’m not gonna get into her tortured publishing history other than to say that DC hasn’t done a good job of integrating her not only into the larger DCU, but specifically the larger world of Gotham. She’s basically been a superhero with a Batsymbol on her chest, but really, she could be wearing a lion or a tiger and it wouldn’t matter. Books like Nightwing, Batgirl, Catwoman, Batwoman, etc., need to be independent but they also need to feel like they’re part of the larger Batworld. As long as Batwoman moves in that direction, I’ll stick. Green light.

They never really have brought Batwoman into the fold and now her book is going. I stopped reading it early on. She’s really a star-crossed character, isn’t she? 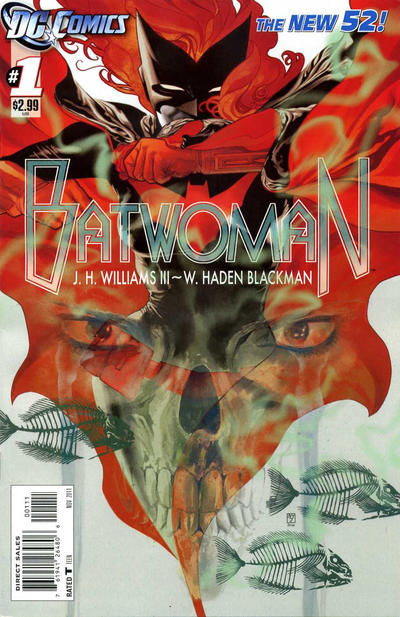 Deathstroke: There was something delightfully subversive about this book. I have to admit that I was drawn in by the idea that they were gonna set him up with a trio of obnoxious, yet CW-ready cohorts. But as the book wore on and they became a little more chirpy, I sensed the change, so I wasn’t entirely surprised when he cut them all down. But it was still a cool move and one that set the real tone for what this book will be. I also thought that his “agent” could be played by Bob Odenkirk from Breaking Bad. Book gets a yellow light, that’s turning red, though. I liked it well enough but am on the fence on whether to continue because it’s really not my thing. I guess it’ll depend on whether it’s a light week.

I would read a really good Deathstroke book. Hasn’t happened in a long time.

Demon Knights: This was OK, I suppose. Nice art. Decent, putting-the-band-together set-up — Vandal Savage! Madame Xanadu! A female Shining Knight, etc! Why isn’t the Demon rhyming? The Demon should be rhyming. Nice art. I dunno, I expected more. Yellow, I guess, but I’m not enthusiastic.

Not many others were enthusiastic either, and it’s gone. 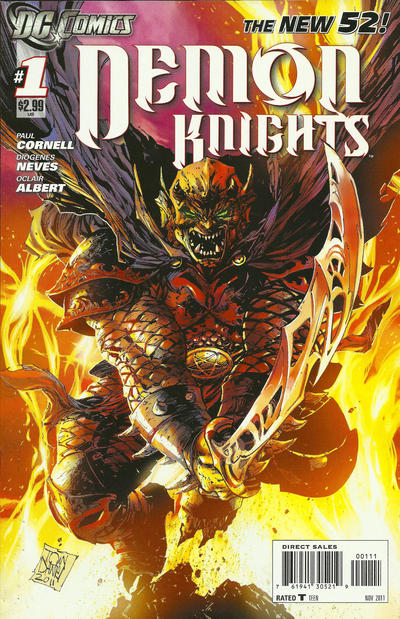 Frankenstein, Agent of SHADE: This … this … this was GREAT. Holy crap, I did not see this coming. Now, I like Jeff Lemire (see Animal Man, Essex County, Sweet Tooth) and I’d heard good things about his Frankenstein mini during Flashpoint, but this is not the kind of book that typically gets my attention.

So I went in figuring, OK, maybe it’ll be decent but I’ll be hard pressed to want to pick it up every month. And I was wrong. Wrong, wrong, wrong. This had, first and foremost, great comedy, terrific action and creepy horror all the while establishing the book firmly in the DCU. Oh, hey, Ray Palmer! Can’t wait for the Incredible Shrinking Man references given the book’s monster-movie pedigree. And there’s a Kirk Langstrom reference! Man-Bat serum! Of course! I love the new Creature Commandos! And they have instant personalities! This book restored my faith that, like Animal Man, there will be more for me in the New 52 than just the stand-bys. Green! Green!! GREEN!!!

After awhile, I lost my enthusiasms for the book. Just didn’t sustain me. 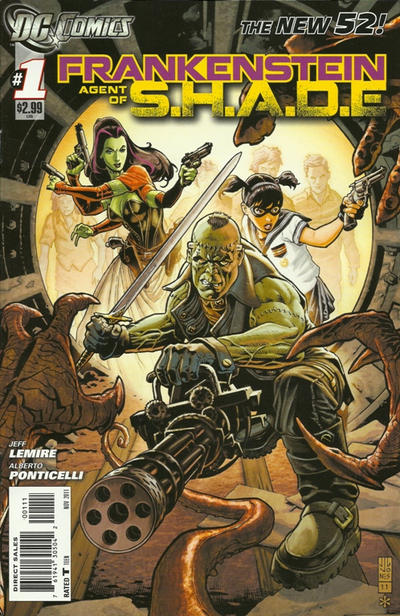 Green Lantern: I’ve shied away from Green Lantern the last few years, with the exception of Blackest Night, because his story seemed to be getting more and more bloated. That and the fact that while I’ve always liked Hal Jordan, I’ve never been a huge fan of the Green Lantern Corps space opera. But I liked this book because it was stripped down and I was surprised to be taken in by the premise: Hal doesn’t have the ring and wants it and Sinestro has the ring and doesn’t want it. That they’ll conspire together has great cop-buddy potential. I give this book, in fitting fashion, the green light.

Didn’t stay with it. 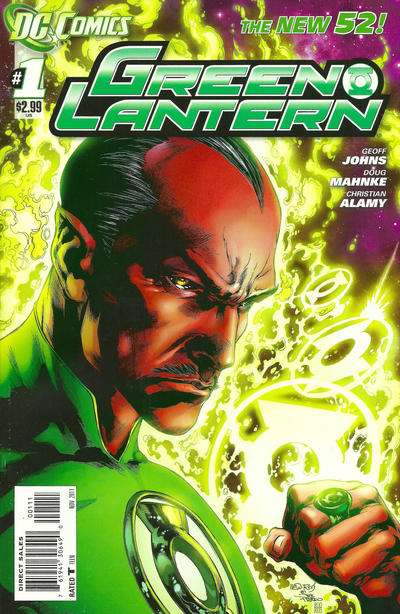 I was right on the money. 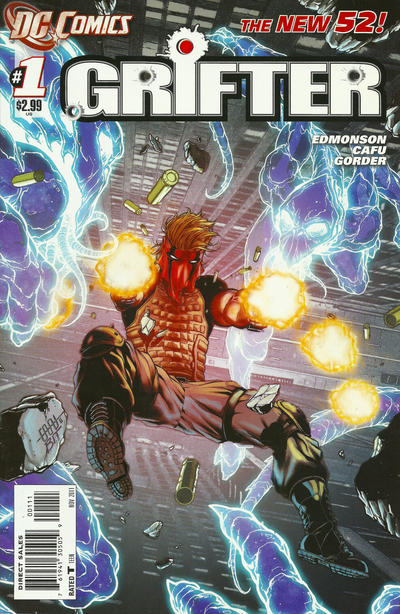 Mister Terrific: Oy. A lot of ideas at work here, with racial, gender and social politics thrown into the mix in largely ham-fisted fashion. Nice seeing Karen Starr pop up — friends with benefits! Book goes for scope and I liked its ambition but the center didn’t hold. Red light.

It stuck around but this just ain’t by bag, baby.

Man, I barely remember this. 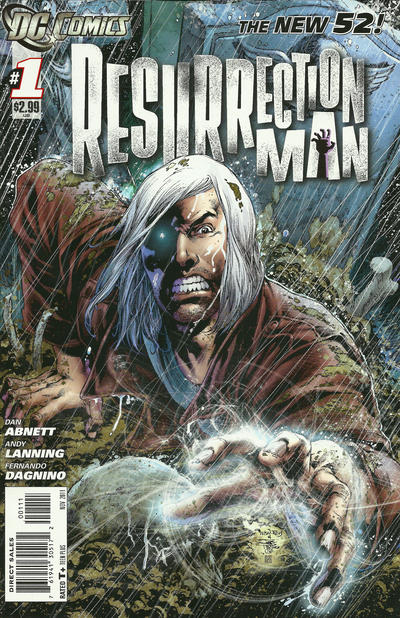 Suicide Squad: There’s been a lot of upset over Harley Quinn‘s outfit, that she’s been all tarted up. She, like Oliver Queen, is a victim of corporate synergy and the general acceptance/belief that people are more familiar with DC‘s characters in media other than comics. So they made her look like she does in the Arkham Asylum/City, etc. video games. Whatever. I’ll live with it. The greater crime is that she’s been stuck in a pretty turgid, torture porn book … that turned out to be a test! Please. Starring Angela Bassett! The Wall has been replaced by the actress who played her in a Warner Brothers stinker. Gah. Red light. All. the. way.

Over time, I’ve become much more forgiving of the synergy between TV, films, video games and comics. But I still am not a big fan of Suicide Squad. And here are my thoughts on the Wall. (Though I do love Angela Bassett in American Horror Story. She rules!)

Superboy: I’ve never really been a big Conner Kent/Superboy guy. His heyday was during my hiatus from comics and I just don’t have a great feel for the character. This seems to be a totally new direction, however. It looks like they’re starting from scratch, other than the basics of his Superman/Lex clone origin. Anyway, it’s a pretty good story with solid art and a lot went on in it. Plus, it’s definitely part of Superman‘s world. I liked it better than I expected, so it’s a yellow. I’ll stick at least for a little while, especially since it’s gonna be hooked into Teen Titans, same writer and everything.

Man, Superboy just doesn’t work for me. On any level. Other than Filmation, I never even really dug the Clark-as-Superboy bit.