He was no Neal Adams and Jim Aparo looms larger with every passing year. Marshall Rogers, on the other hand, was Batman’s Hendrix – a brilliant virtuouso with a limited catalogue.

But Novick was the journeyman, the utility player: easily taken for granted but a real pro who was a superb storyteller, able to go light or dark depending on what the situation warranted. 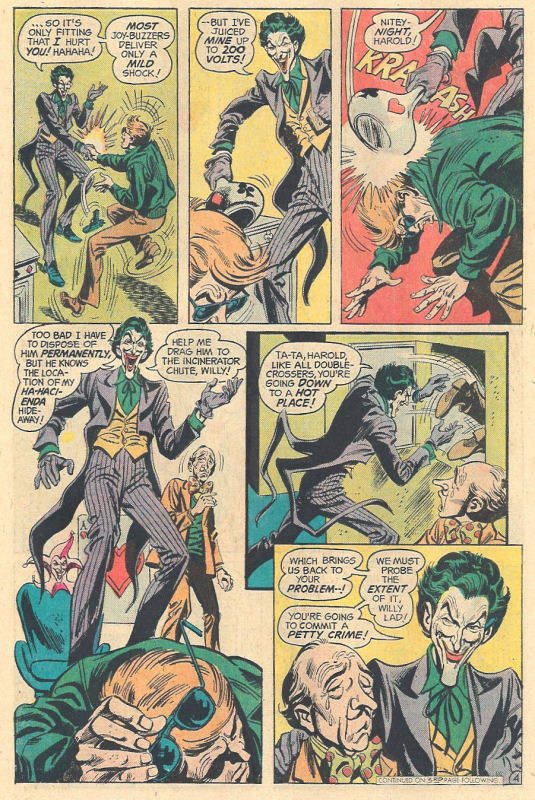 As is the case with almost anyone, he was at his best when inked by Dick Giordano, the artistic glue who helped give the Darknight Detective a consistent look regardless of who wielded the pencil.

Right now, I’m in the middle of a Batman/Detective re-read that began with 1964 and has now reached the mid-’70s. I just recently finished 1974’s run of 100-Pagers and was happily surprised by a story whose details I’d long forgotten – Batman #259’s The Night of the Shadow!, teaming the Masked Manhunter with one of his great inspirations. 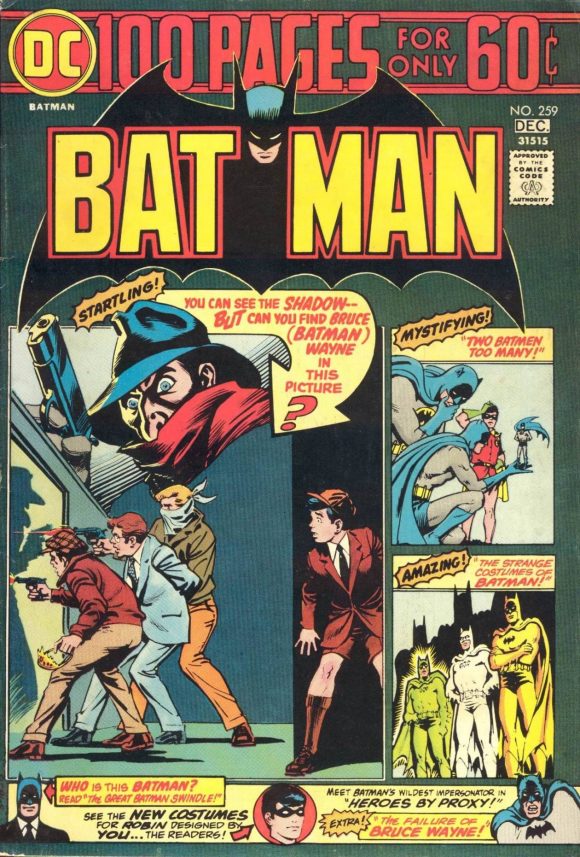 Written by Denny O’Neil with art by Novick and Giordano, The Night of the Shadow! is a sequel to the less compelling Who Knows What Evil — ? six issues earlier by the same team.

The exact details of the issue are less important than its themes – a rumination on childhood trauma, PTSD and gun violence. It’s the first story to maturely explore Batman’s aversion to guns – utilizing the Shadow’s dual pistols as a counterpoint.

It’s typical O’Neil: emotional social commentary disguised as whiz-bang adventure. It’s effective and moving, especially when you consider it came at a time when not every single story mentioned Batman’s murdered parents or showed a bunch of pearls mournfully dropping to the ground. 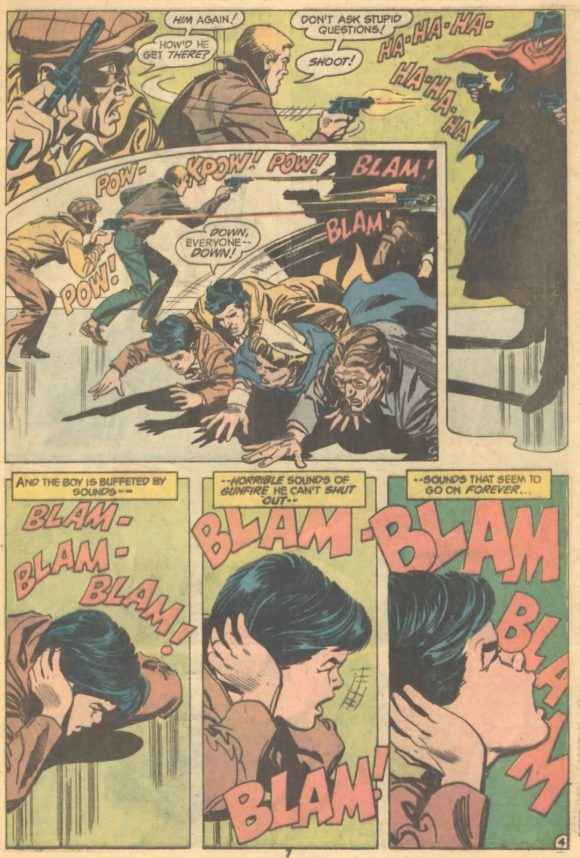 It’s also some of Novick’s best Batman work, which is saying something when you consider that he worked on Gotham’s protector on and off from the late ’60s to the early ’80s.

But there’s one page that really jumped out at me when I read it again recently – a bold reminder of just how skilled an artist he was: 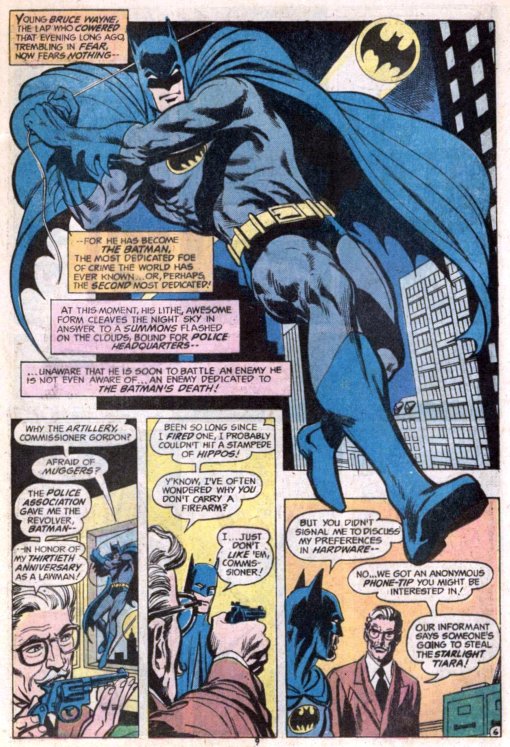 Novick wasn’t one for flashiness. His work was fairly straightforward, with few if any splash pages or double-page spreads to be found. But here he takes a classic Batman image – swinging on a rope, Batsignal blazing in the distance – and makes it his own.

The Caped Crusader glides smoothly right at you, dominating the page. But it’s not gratuitous posterizing – rather, it’s a brief reminder of Batman’s visual power that leads right back to the narrative.

By the way, I’m running this piece in tandem with Robert Greenberger’s TOP 13 SUPERHEROES INSPIRED BY THE PULPS – RANKED, which you should click here to check out. Naturally, Messrs. Wayne and Cranston make an appearance. — Dan 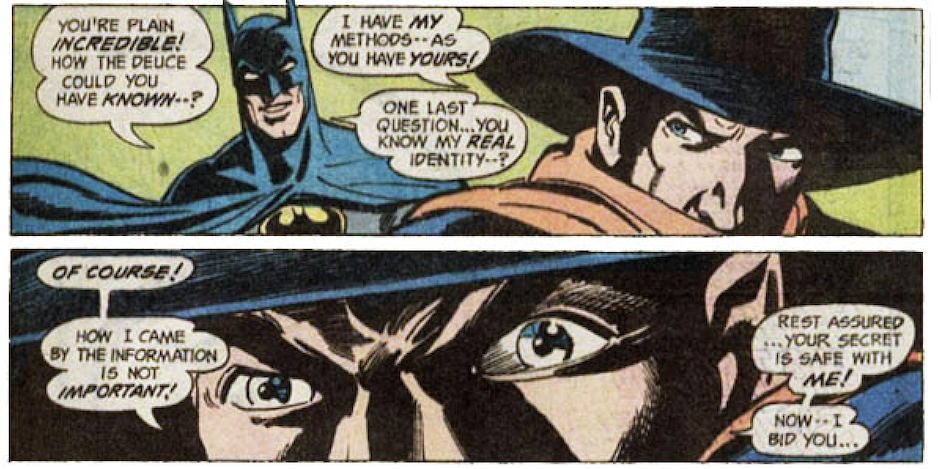 UPDATED: Historian Arlen Schumer chimed in with his own favorite Novick page, from Batman #221, also inked by Giordano. I don’t think you can go wrong with either, so I’m posting this one too: 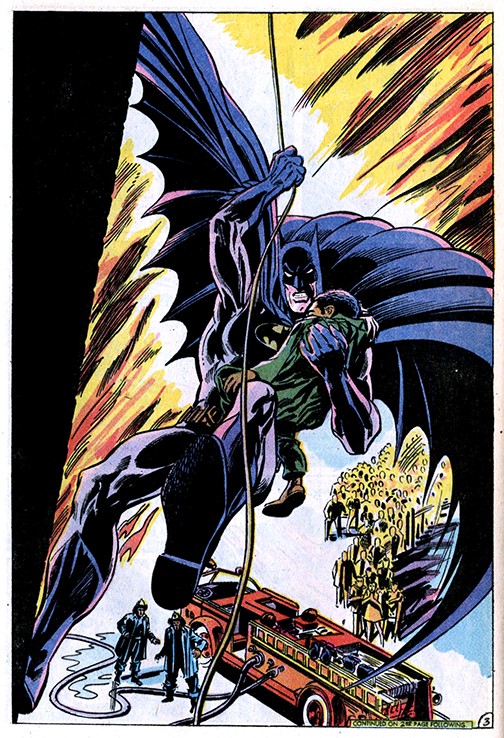