A talk with writer Ryan Ferrier and a mesmerizing video EXCLUSIVE by artist Daniel Bayliss. 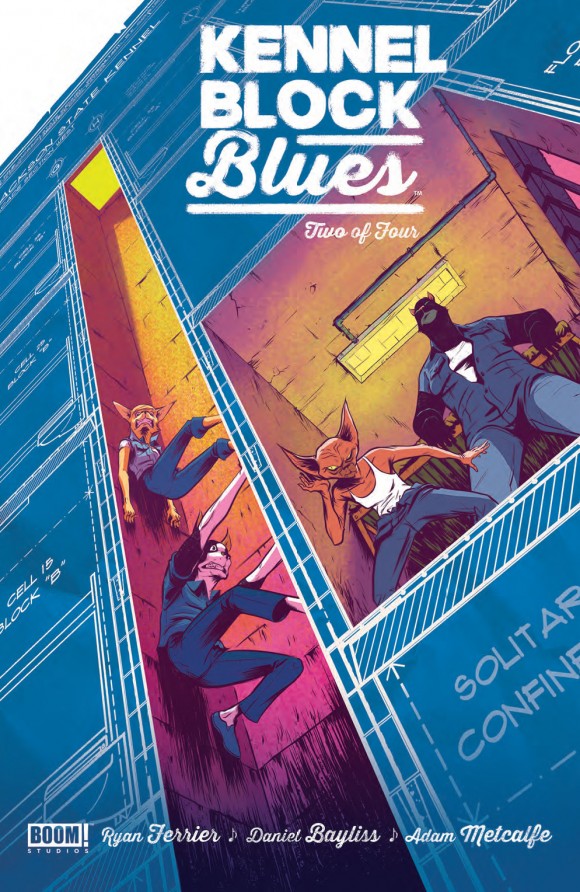 I was saying the other day, “Y’know what we don’t have enough of? Prison stories starring anthropomorphic animals. But done as a musical.”

Actually, I didn’t say anything like that because who would ever think of such a thing?

Writer Ryan Ferrier and his coterie of artistic collaborators on Boom! Studios’ Kennel Block Blues, it turns out. And the result is inventive, bizarre and more than a little unsettling. The main story is illustrated in a relatively straightforward, kinda-sorta realisticish style (if such a thing can be said about anthropomorphic animals) while the musical numbers are done up in bright colors and a more cartoonish style.

Anyway, Issue #2, with art by Daniel Bayliss and one of our favorite colorists, Adam Metcalfe, is out this week (3/9). So check out what Ferrier has to say, then scroll down for an outstanding, animated video by Bayliss, showing him drawing the cover of Issue #4. 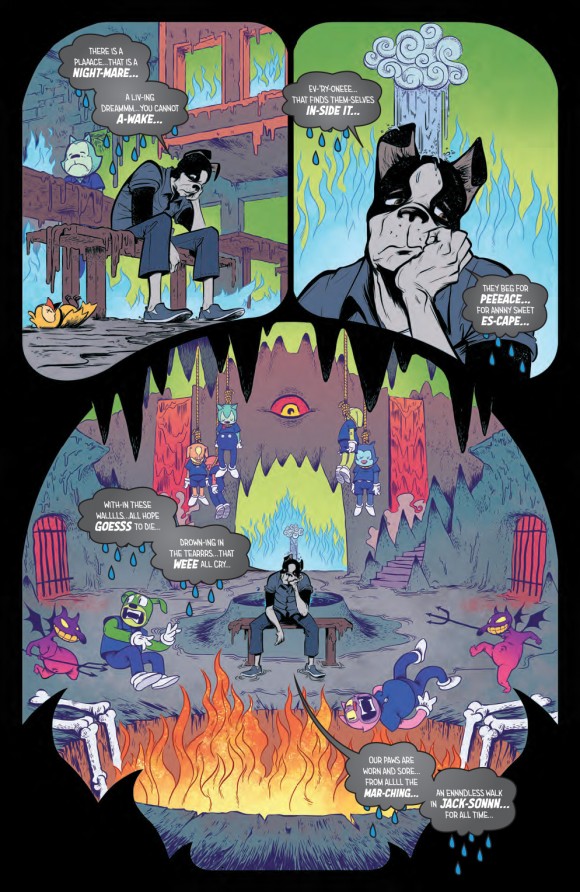 Ryan Ferrier: I’ve always had a propensity for writing non-human characters, and some of my favorite comics are animal-centric, so the Secret Origin of Kennel Block Blues wasn’t so secret. I always knew that this type of story, anthropomorphic, would be something I’d work on. I have a fascination with prison stories, both fictional and non-fictional, and am deeply passionate about animal rights and welfare, as well as some of the other themes we’re touching on in the book, so really we found a way to bring them all together in harmony and bring life to these characters.

So really, it was about carving through our interests and discovering something new and unique among them. Daniel [Bayliss’] art, Adam [Metcalfe’s] colors, and Colin [Bell’s] letters have been vital to informing the very DNA of the book as we came together as a creative team. 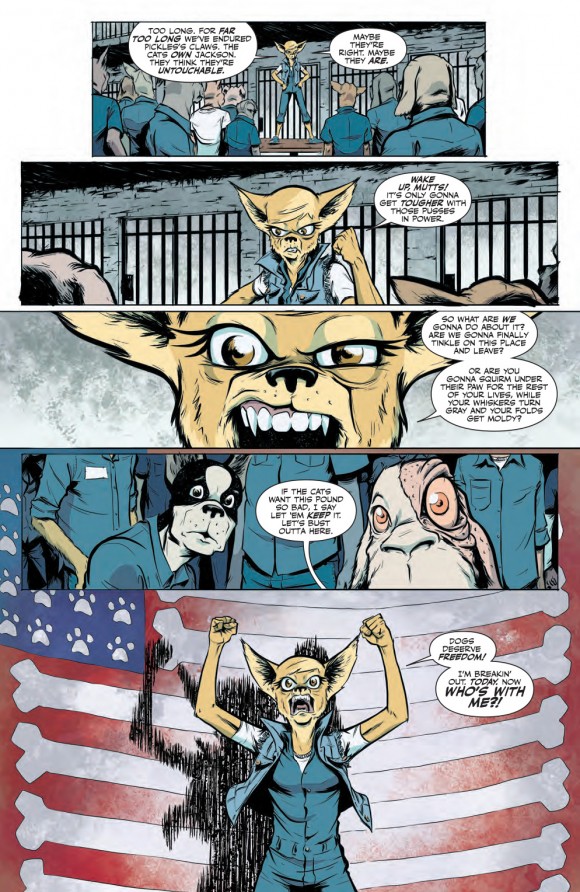 Dan: Kennel Block Blues is simultaneously amusing and sick. Awesome! What’s the response been like so far?

Ryan: It’s been totally wonderful! I’ve been nothing less than thrilled that people seem to be really digging the series so far. There’s always some anxiety that comes with releasing a new book, and anticipating the reaction, but it’s been stellar. We’re all really, really proud of the work, and we really believe in it, so it’s very rewarding to have people and peers enjoy it. 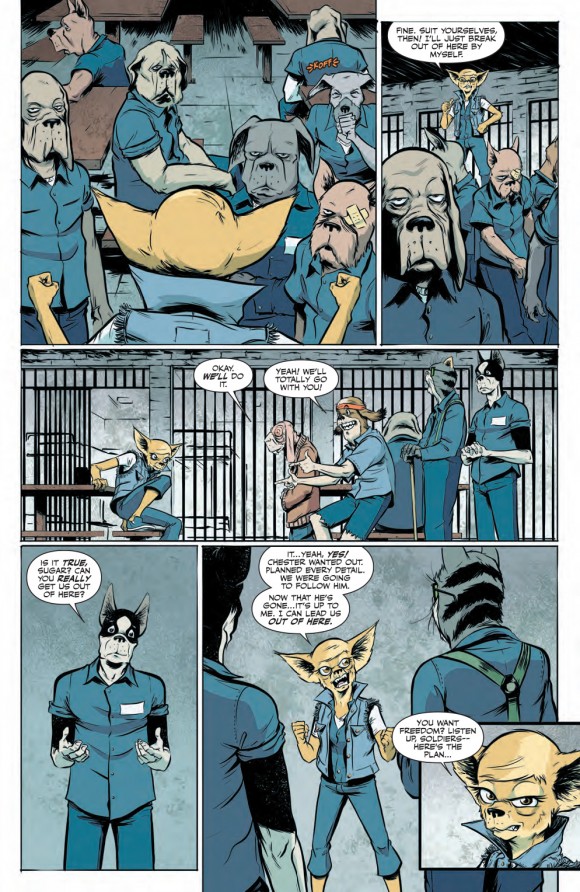 Dan: Have you written actual tunes or just the lyrics?

Ryan: I actually start with the tunes, the melody, in my head. I’ll just keep repeating it in my mind while I write lyrics. For most of the songs, I’ve made little audio files of very crude digital piano notes. Not that I cannot play the piano or keyboard, and have no idea what I’m doing…but I was able to squeeze out a couple little ditties that matched the music in my brain. But yes, for every song and musical number in the series, I know precisely what that “sounds” like in my head at least. 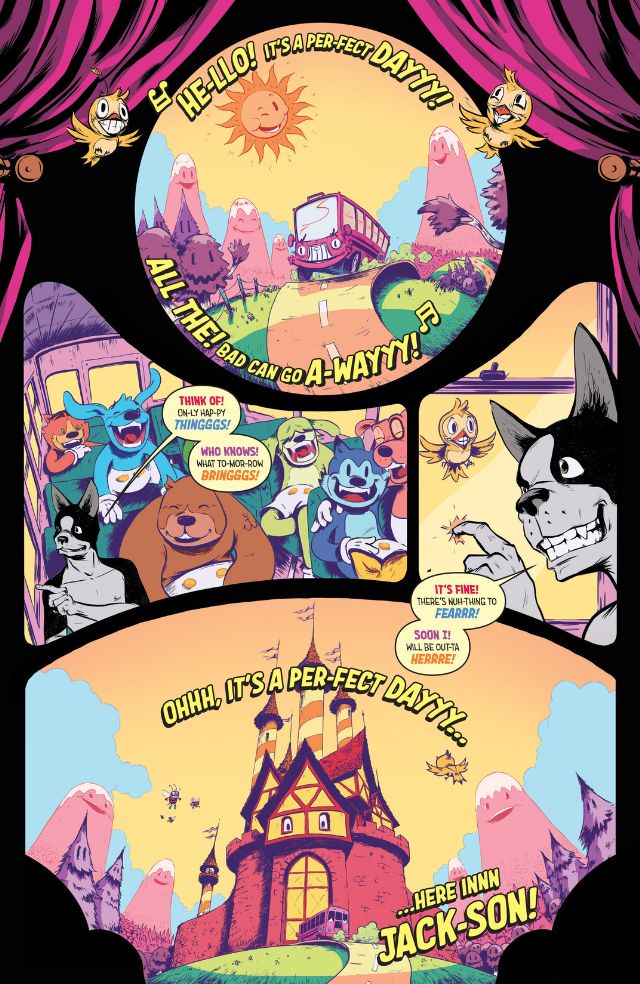 I’ve heard a couple of people sing me the versions that are in their heads, and it’s really interesting to see how differently our brains translate the readings into music. It’s almost as if there’s no right or wrong way, and that’s what we’ve been going for with that aspect of the book.

Ryan: This is a very difficult question. I’m a big fan of prison dramas. Prison is also one of my biggest fears. I’m a big Eastwood fan and really adore “Escape From Alcatraz.” That’s the first film my mind goes to when I think of prison dramas. Given a choice, I would usually steer more toward true crime or documentaries. I would like to name “Ernest Goes to Jail” as an honorable mention. That film is just funny no matter who you are.

Now, check out this awesomeness: