Hey, we’re having a bit of an unofficial Godzilla Day here at the ol’ 13th Dimension.

But there’s another reason: TwoMorrows’ RetroFan #10 is out Aug. 5 and it includes a thorough history of Godzilla merchandising in the U.S., by Robert V. Conte. 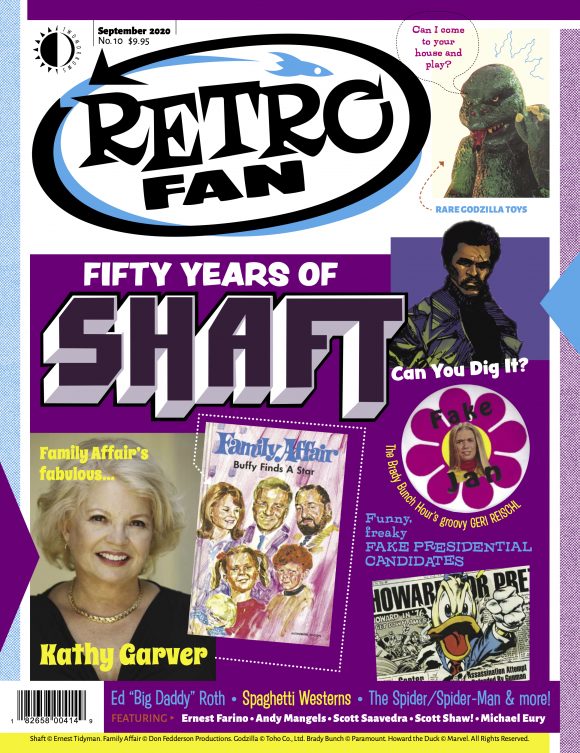 So, it only made sense for our usual EXCLUSIVE EXCERPT from the issue to focus on the King of the Monsters.

(By the way, this might be the most eclectic RetroFan yet. Grok the table of contents.) 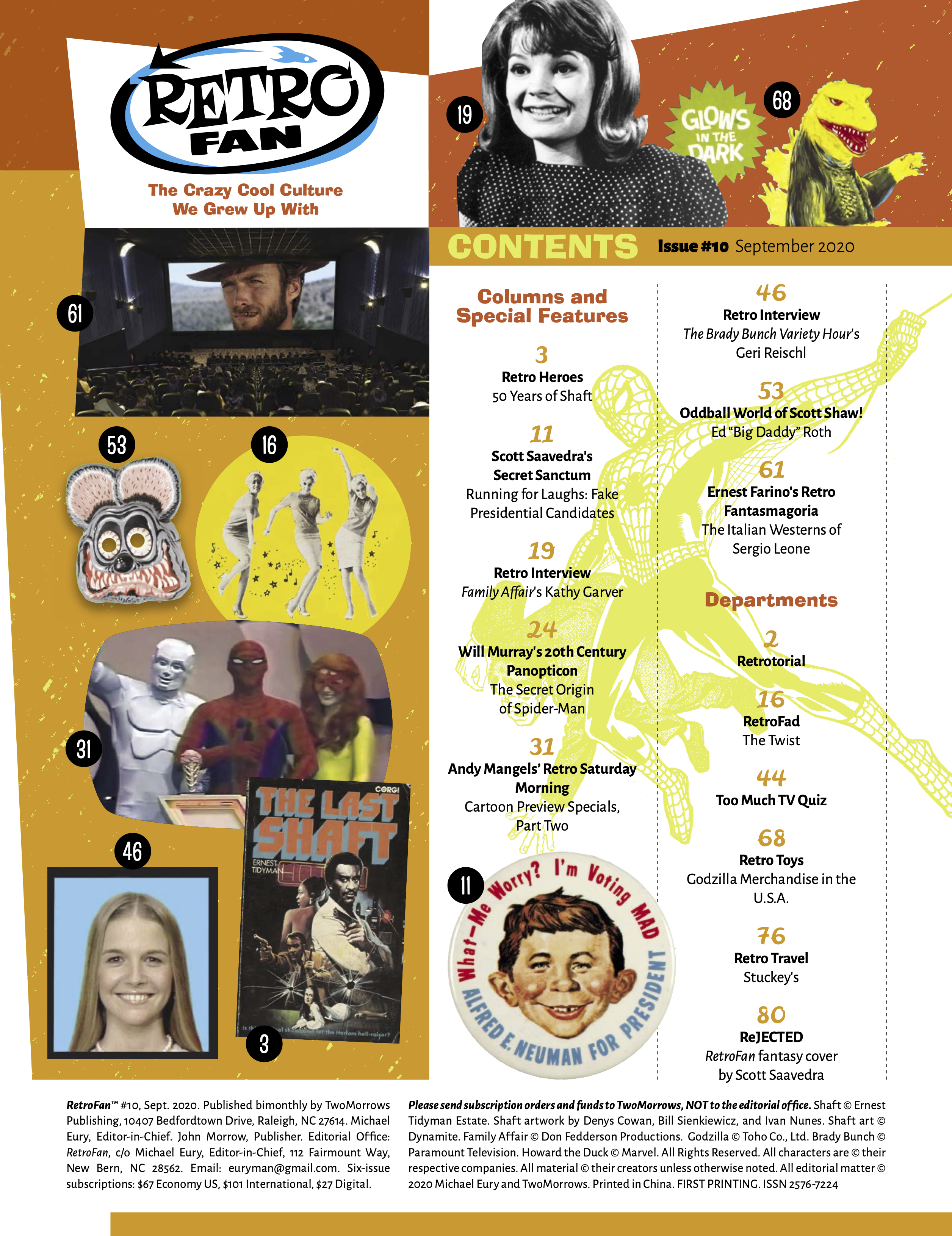 Anyway, this excerpt deals with Godzilla in the ’70s, a period when a generation of kids – myself included – first encountered the mythical Japanese monster.

(Also, click here to check out an INSIDE LOOK at the far out 1970s Marvel Godzilla comics series.)

So give a roar and dig this: 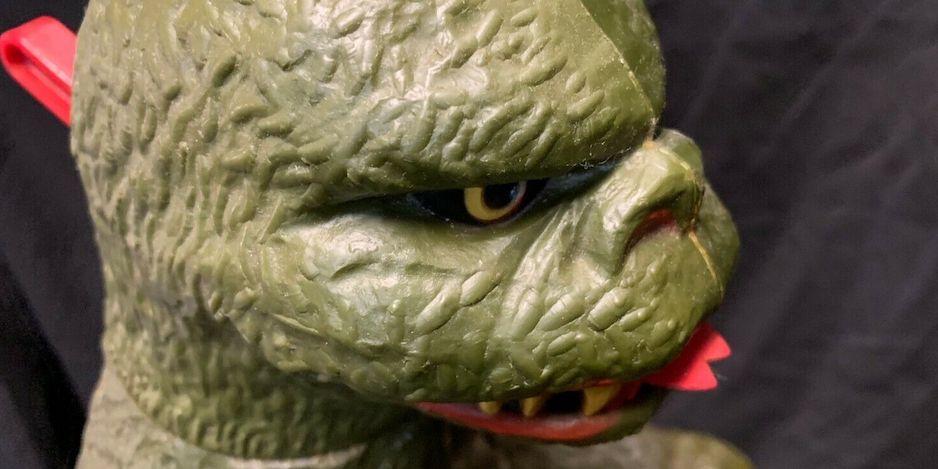 Not to be undone by the record-setting licensing campaign of the 1976 King Kong remake, Henry G. Saperstein — owner of UPA animation studios and Godzilla’s North American licensing agent for Toho Co., Ltd. — was determined to surpass the success of the Japanese monster’s former cinema adversary. With the character’s strong presence at toy-and-licensing events, combined with trade ads teaming the King of the Monsters with Mr. Magoo, Saperstein aggressively secured various merchandising deals including:

Aurora Plastics Co. Shortly after the 10th anniversary of the consistently selling Godzilla Model Kit, the hobby company licensed two new additional monsters: Ghidrah, the Three-Headed Monster and Rodan. As Saperstein’s arrangement with Toho was specific to Godzilla, he had to obtain the studio’s additional approval. Both kits were discontinued after the company was sold to Monogram in 1977. Fortunately, Godzilla’s glow-in-the-dark kit was reissued again, this time with a photograph on the box showing the completed model!

Ben Cooper Inc. As King Kong remained a consistent seller over decades, the iconic Halloween-themed company produced a Godzilla costume in 1978. The first release was sold in its own branded box featuring art from Marvel Comics’ Godzilla #8. It was later repackaged for inclusion in Cooper’s “Monster,” “Famous Faces,” and “Play Suit” lines (the latter allowed repackaged overstock to sell all year round). Although Godzilla’s mask remained the same, the vinyl smock’s chest area has two known variants — the first a yellow background and the second green so the outfit appeared more authentic.

In 1980, Ben Cooper slightly modified its 1974 Pre-Historic Dinosaur “Jiggler” (a rubber figure with small a strap designed to dangle from automobile rear-view mirrors and high surfaces) by removing a horn atop its head. Add some green paint on the creature’s back fins and, voilà, Godzilla! (No, not really!)

CBS/Columbia Records. Godzilla served as inspiration for his very own song. Known for memorable tracks Don’t Fear the Reaper and Running for You, hard rockers Blue Öyster
Cult recorded Godzilla for their 1977 album Spectres. Their label issued a single for radio airplay, in seven-inch and 12-inch formats, with studio and live versions of the song. It features a picture sleeve featuring a promotional still from Godzilla vs. the Sea Monster.

GAF View-Master. The 21-scene, three-reel packet “Godzilla’s Rampage” was produced for the popular line of 3D standard and Talking View-Master viewers in 1978. The Pictorial Products company included a black-and-white activity booklet. Although in-house artist Pete Dorsett was credited for the illustrations, the fact is all depictions of Godzilla were actually traced from Herb Trimpe’s artwork printed in the first two issues of the Marvel Comics Godzilla series. 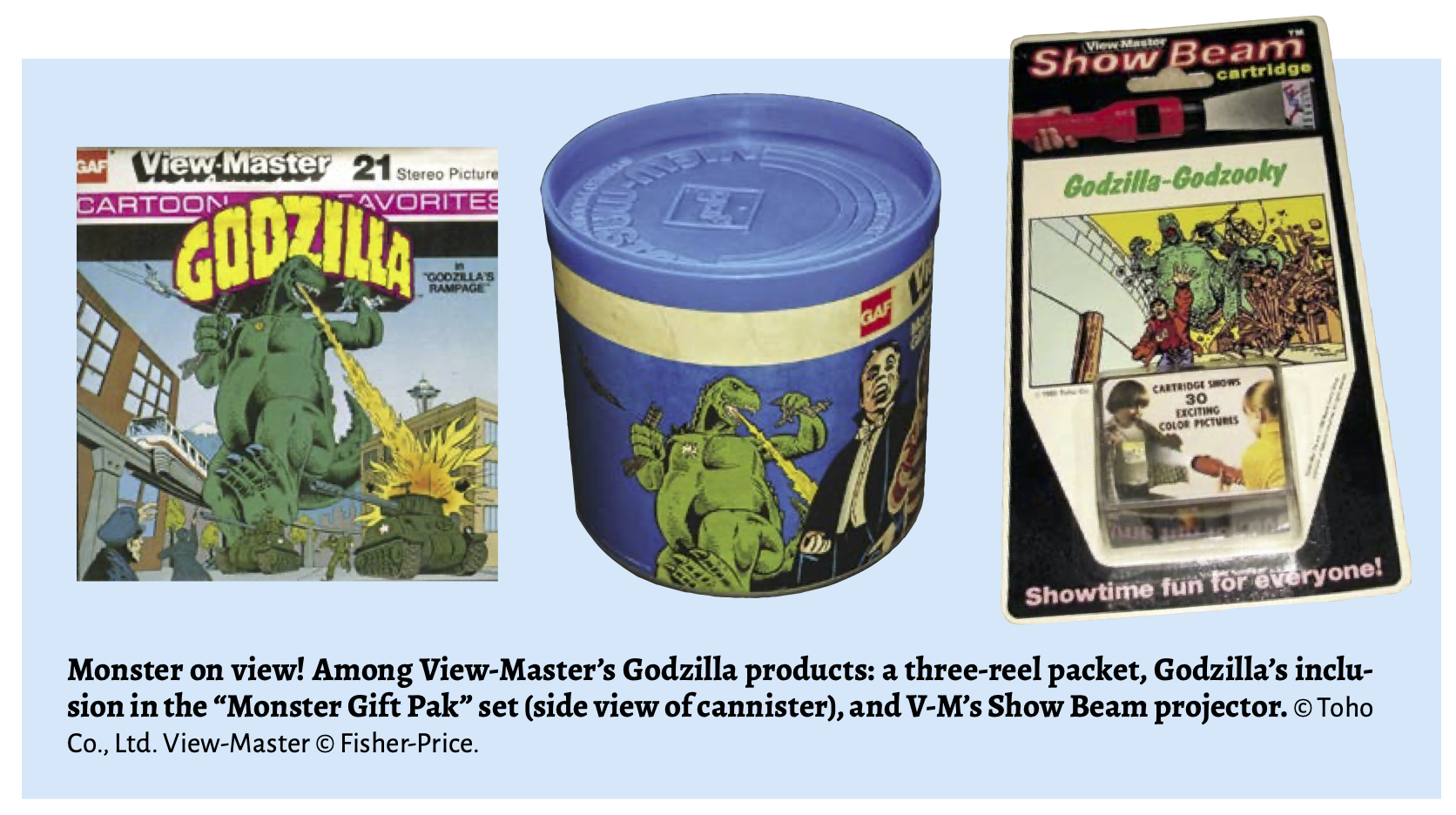 Joined by Dracula, Frankenstein’s monster, and Wolf Man, an edited version of the Godzilla story was included inside a seven- reel “Monster” expanded set, and again as a “Monster Gift Pak” including a standard 3D viewer inside a branded canister.

In 1979, GAF released a Godzilla/Mr. Magoo cassette compatible with its Double-Vue film viewer, featuring clips from the Hanna-Barbera animated Godzilla show. Lastly, a “Godzilla- Godzooky” cartridge from the same program appeared in 1980 (repackaged in 1982) for its Show Beam Projector.

GLJ Toy Company, Ltd. This Long Island-based company, granted a patent for inflatable action toys, dabbled in IP licensing and utilized its technology to release the first-ever Godzilla Bop Bag in 1978. Other products that year include the Godzilla Ball Target Game and Godzilla Toy Wrist Watch. In the collector’s world, GLJ’s Godzilla, King of the Monsters Bendy Figure remains among the most collectible items today.

HG Toys. After lackluster sales of American Publishing’s Godzilla, King of the Creatures Puzzle in 1977 (reportedly, the image based on the original 1954 film was considered “too gruesome” for children), a new license for this category was granted to HG Toys. In 1978, three 150-piece puzzles and one, giant 100-piece puzzle were produced, all illustrated by fantasy artist Earl Norem. Norem, known for painting the cover (over a Jack Kirby sketch) for Marvel Comics’ first-ever original graphic novel, The Silver Surfer, by Stan Lee and Jack Kirby, as well as for painted covers of various Marvel-produced black-and-white magazines of the ’70s, modeled his Godzilla after Trimpe’s design. Titles include “Air Attack,” “City Rampage,” and “Harbor Havoc.”

In 1979, the company released its Godzilla Battles the Tricephalon Monster Play Set. This amazing item — pitting Godzilla against an adversary resembling a “Mecha-Ghidrah” — was ahead of its time. Inadequate marketing and promotion led to its untimely demise as it was overshadowed by Mattel’s Godzilla toys. The direct competitor advertised its products heavily in mass print and on television, while HG Toys relied upon orders from its trade catalogs and consumers seeing its products in stores. As a result, unsold units were returned and destroyed. Many Godzilla collectors did not know this item actually existed until years later, resulting in its high collectability today!

Ken Films. Before Betamax video recorders and players were commercially available, many American homes relied on film projectors. Scenes from Destroy All Monsters, Godzilla vs. the Thing, Ghidrah and other Toho monsters were available via mail order and camera shops. Although these Super 8mm reels lasted only a few minutes, watching Godzilla and gang at your leisure was an appealing alternative to missing them on TV.

Marvel Comics. It was 1976 and, as Godzilla’s 20th anniversary in the U.S. approached, Saperstein envisioned new ways to increase profitability of Toho’s number-one monster— including new adventures taking place in America instead of Japan. U.S. television and film studios balked at the idea; the budget for 1976’s King Kong was considered astronomical and the film did not meet financial expectations. Toho was unlikely to support losing control over its IP, as well.

Yet, four-color adventures of Godzilla could be done inexpensively and quickly. Enter Marvel Comics Group! A story was developed where Godzilla, at first trapped in an iceberg that floated from Japan to Alaska, rampaged through the nation while battling super-heroes including Spider-Man, Iron Man and the Mighty Thor along the way!

From 1977–1979, 24 monthly issues of Godzilla, King of the Monsters comic books were published. All but two issues were penciled by Herb Trimpe (1939–2015), whom Saperstein approved as artist after seeing his stunning work on Marvel’s The Incredible Hulk. (Note from Dan: Click here for an INSIDE LOOK look at Godzilla vs. the Marvel Universe.)

Mattel. The toy company that brought us Barbie, Hot Wheels, and Masters of the Universe, impressed by Saperstein’s stateside success with Godzilla, wanted to join Toho’s team of licensees. Considered by many to be the crème-de-la-crème of Godzilla collecting, its 1978 Shogun Warriors Godzilla skyrocketed in sales and lifted popularity of the entire Shogun Warriors line. Collectors are known to spend precious time and money seeking specific variants of this figure. Some argue that the earliest known models, made in Japan for Mattel via Bandai, are the most desired. Others claim the later, U.S.-made versions are preferred due to improved sculpting of Godzilla’s tail, shooting claw, and fire-breath lever!

Other Mattel/Toho toys released include the 1978 Godzilla Game (not a reissue of the Ideal game — its original, all-plastic design features a “pop-up” Godzilla with “roaring sound”); the Godzilla’s Gang eight-figure series (that bizarrely includes Japanese monster characters outside of Godzilla’s Monsterverse), and perhaps the scarcest Mattel/Toho toy of all — 1979’s Rodan.

Wonderland Records. In 1977, one would find this item in the “Children’s Records” section at their local record store. Featuring Trimpe’s art from Marvel Comics’ Godzilla, King of the Monsters #1, the album includes two 15-minute stories: “Godzilla vs. the Alien Invasion” on Side A and “Godzilla vs. Amphibion” on Side B. The disc plays like a radio drama and feels like a prelude to the Hanna-Barbera animated series that would debut the following year.

Interestingly, Godzilla’s roar throughout the recording is the menacing original from the first 1954/1956 film, not the kid-friendly version of the time.

RetroFan #10 is set to be in comics shops Aug. 5. It can also be ordered directly through publisher TwoMorrows. Click here.

— INSIDE LOOK: The Ultimate Battle! GODZILLA VS. THE MARVEL UNIVERSE. Click here.