The Ultimate Battle! GODZILLA VS. THE MARVEL UNIVERSE

The King of the Monsters tramples the House of Ideas! 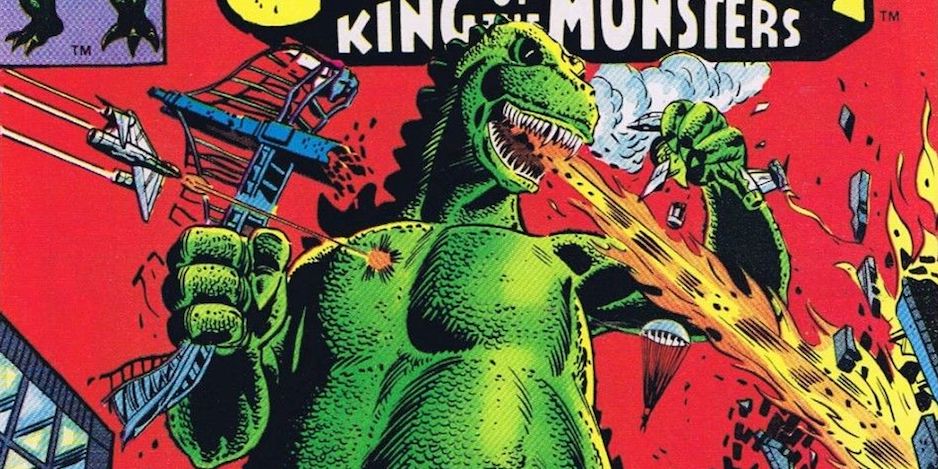 What do Captain America, Spider-Man, the X-Men, and Godzilla have in common? That’s right: They’ve all starred in comics published by Marvel! (And oh, yeah, something about them all having movies out this summer, I guess.)

The Marvel Godzilla comic book is a thing of weirdness and wonder, a campy classic that plays up all the tropes of the Godzilla movie series within the Marvel Universe, and yet manages to be extremely faithful to the personality of the Big Green Guy. To celebrate this week’s release of the brand-new Godzilla movie, here’s a look back at Marvel’s oddball and awesome 1977-1979 Godzilla comic! 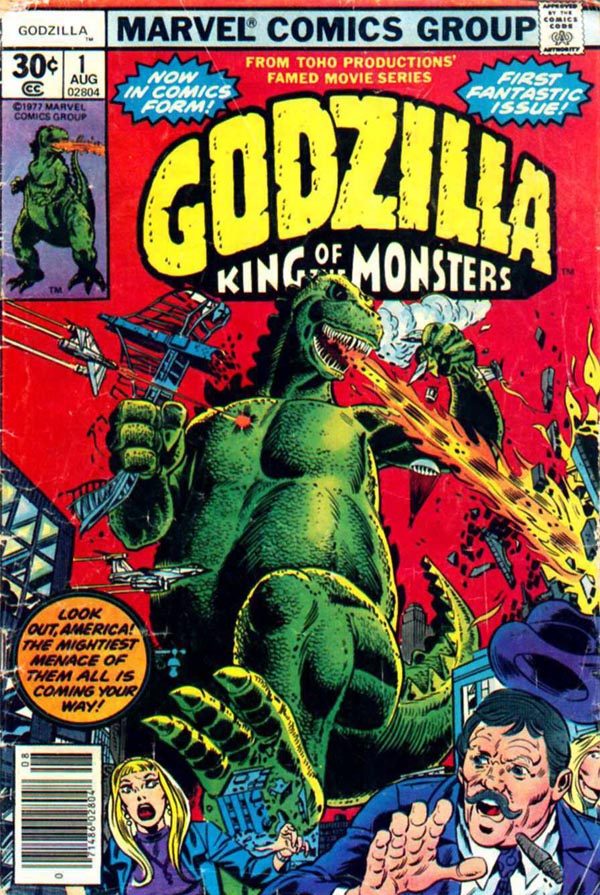 Godzilla #1 (1977), script by Doug Moench, art by Herb Trimpe.
All images in this post are by Moench and Trimpe unless otherwise indicated.

The mid-to-late 1970s was a period of great expansion and creativity for Marvel Comics, building upon and dramatically growing both the created universe and the publishing empire of 1960s Marvel. Debuting on the newsstands during the age of disco and CB radio were comics starring Ms. Marvel, Moon Knight, Nova, Spider-Woman, and Howard the Duck.

It was also a period in which Marvel sought to expand beyond its own universe: a new golden age of comics licensed from toys — The Micronauts, Rom: Spaceknight, Shogun Warriors — and movies — Logan’s Run, Planet of the Apes, 2001: A Space Odyssey…not to mention the 800-pound Wookiee in the room, Marvel’s hit Star Wars series.

Then there was Godzilla, promoted with characteristic humor and hype on the June 1977 Marvel Bullpen Bulletin page: 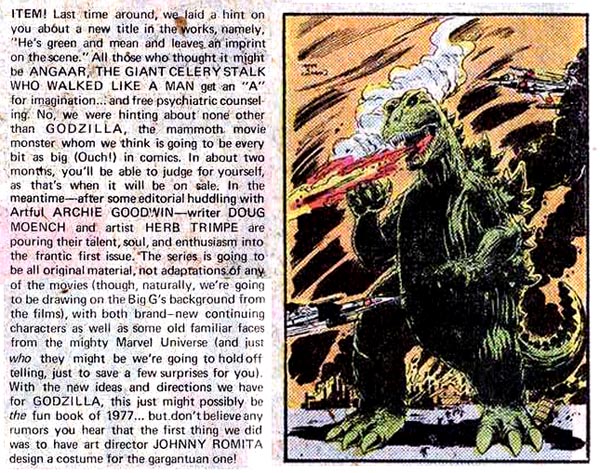 Issue #1 gets right down to business introducing its giant star, an economical origin flashback capturing everything you need to know about Godzilla, even though Raymond Burr isn’t on hand. 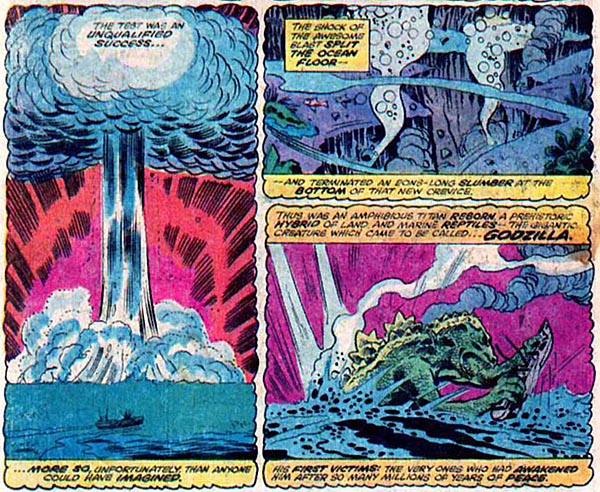 It’s quickly clear, however, that this licensed title has more in common with the toy properties than the movie properties Marvel was adapting. Like Micronauts and Rom, it’s based right on good old familiar Marvel-Earth and guest-stars Nick Fury of SHIELD. For this scene, Nick won the 1977 “Most Dramatic Speech Given with a Lit Cigar Clenched Between Your Teeth” awarded to the comics industry by the Philip Morris Company. 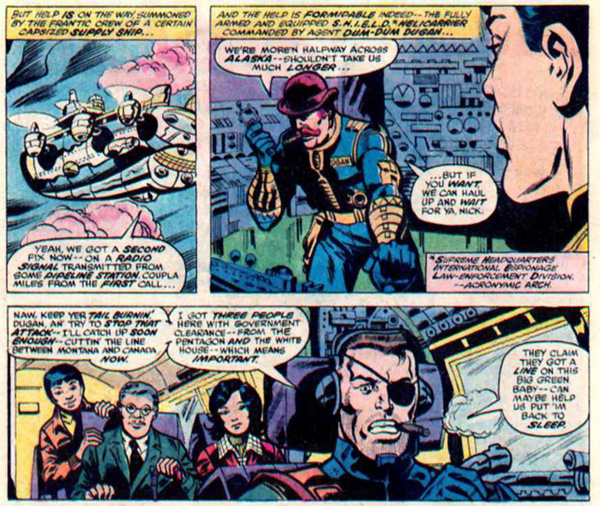 Nick’s only making a guest appearance here before he jets off to punch Hydra agents in the face. “Dum-Dum” Dugan, Nick’s right hand man since World War II, will lead the SHIELD operation to stop Godzilla from stomping up onto the American West Coast.

Also, meet our supporting cast! They’ve come all the way from Japan and they’re delighted to be here: atomic scientist Dr. Yuriko Takiguchi, his grandson Robert Takiguchi, and assistant Tamara Hashioka. They’re characters taken so closely from the template of a Toho studio Godzilla film that I had to double-check online to make absolutely certain that yes, these were all-new characters created especially by comic book scripter Doug Moench.

SHIELD’s anti-Godzilla strategy relies heavily on their patented futuristic secret-agent technology, like this machine that shoots big blocks at Godzilla. Um, you guys do know that a cube is not the most aerodynamic shape you can fire out of a cannon, right? 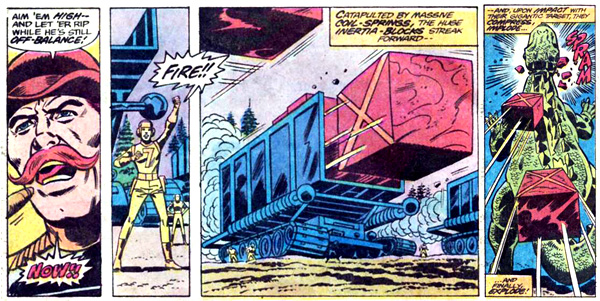 Later in the series, SHIELD debuts heavy equipment that’s a little more impressive than its Rubik’s Cube Launcher: The Behemoth, a massively armored, heavily armed version of the SHIELD helicarrier. These stories were set during the American energy crisis, so I’d guess President Jimmy Carter disapproved of the gas-guzzling Behemoth, the template for the modern SUV. After attacking Seattle, Godzilla lumbers down the West Coast to San Francisco. It’s not depicted in the comic book whether or not Godzilla had any time to take in the sights along the way: the beautiful Oregon coast, popular hipster burg Portland, or the lush vineyards of Napa’s Wine Country. He does manage to hit the Golden Gate city at exactly the right time — the late 1970s — to encounter the Champions.

This was one of the Champions’ very few guest appearances outside their short-lived book. So many Marvel teams have been resurrected following the cancellation of their first comic book series — we’re lookin’ at you, New Warriors — but after the final ish of their magazine, the Champions were gone for good and Marvel has never published a revival. With words like “Champscraft,” who could blame them? 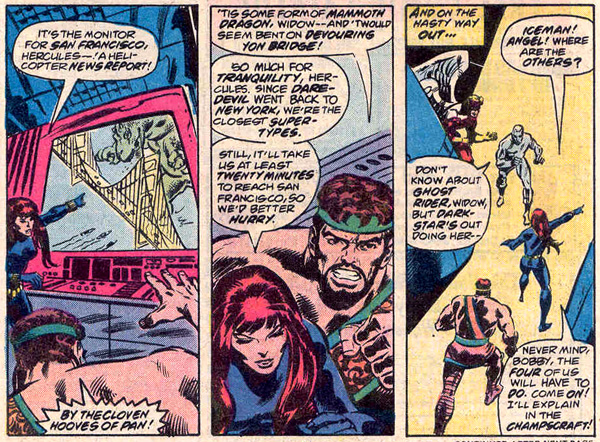 Any fears that Marvel might skimp on what make Godzilla movies great — honkin’ big monster fights — were soon relieved. This is the first of several giant monster fights in the series, with a big red dragon called Batragon. Please, DC, don’t sue ’em! The closest Godzilla had to a nemesis in his comic (if you don’t count mankind) is Dr. Demonicus, created-for-this-series evil geneticist super-villain. That cannot be a comfortable mask to wear, and so to compensate, Demonicus makes every one of his henchmen wear the same mask. It’s not often that A.I.M. henchmen in their yellow beekeeper hoods have anybody to look down on, but they were all giggling at Demonicus’ men every year at the annual Henchmen Christmas Party.

Yep, there were plenty of big enemies for Godzilla to swap punches and nuclear breath with. Red Ronin, a giant robot (in the best Jet Jaguar tradition) designed by Dr. Yuriko Takiguchi and piloted by his grandson: 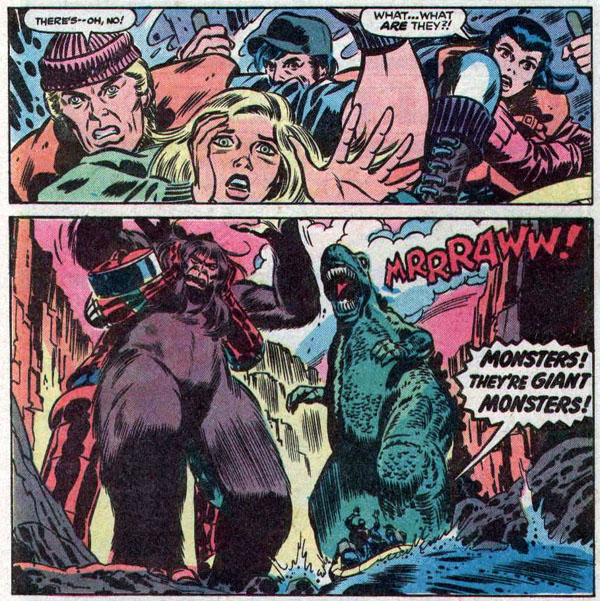 Here’s Big G Versus the Giant Beta Beast on the Moon. I like to imagine that this thing kept pooping on the Watcher’s front yard, causing Uatu to run out in his in bathrobe, shaking his fist at the Beta Beast. “Get off my lawn!” 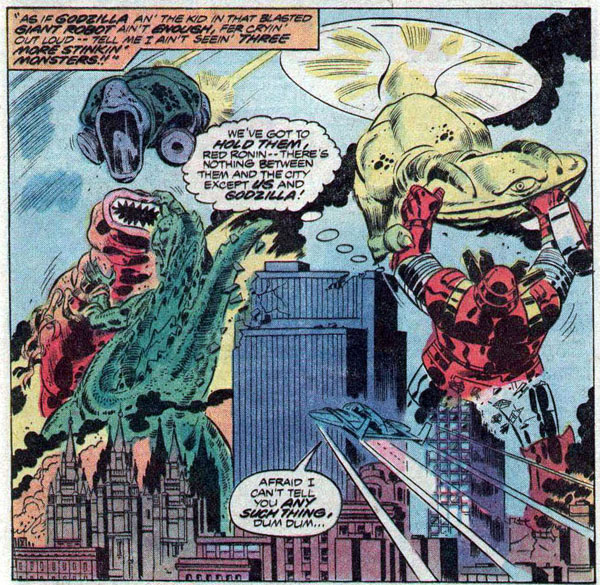 … especially when Godzilla tricks this guy into chopping his own head off with his buzz-saw tail. 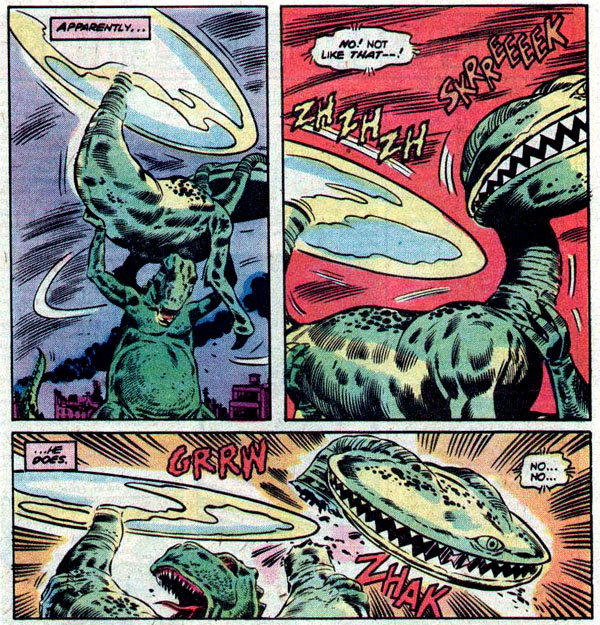 By the time The Artist Formerly Known as Gojira reached the East Coast, however, he’d traded up from battling other big monsters to facing off against the Marvel Universe’s superheroes. Thanks to Hank Pym’s Ant-Man formula, SHIELD managed to shrink Godzilla, but when he escapes, it’s clobberin’ time versus the Thing over a tank of live sharks. Depending on your definition, this is either “silly” or “awesome.” I choose to regard it as both. “Slawsome.” Familiar guest-stars a-plenty are a feature of the last few issues of Godzilla. After Reed Richards uses Dr. Doom’s time machine to shoot Godzilla into the prehistoric past, he encounters Jack Kirby’s Moon Boy and Devil Dinosaur. The fact that this did not lead to a monthly comic book titled “Godzilla/Devil Dinosaur Team-Up” is a great disappointment to me. When Godzilla makes it back to the 20th century, he faces off in midtown Manhattan against the biggest names in the Marvel Universe, attempting to stop him from climbing up the Empire State Building a la King Kong. (I did not make that bit up.) As awe-inspiring as that is, let me humbly suggest that this following scene is the finest encounter Godzilla has with a denizen of the Marvel Universe:

The series ends with Issue #24, and Marvel no longer has the rights to publish Godzilla comic books. Godzilla’s legacy in the Marvel Universe, however, lives on. He returns in an Iron Man issue battling the West Coast Avengers. He’s been mutated by Dr. Demonicus so he no longer looks like Regular-Style Godzilla, and he’s never named in the comic, but there’s enough reference to the earlier stories for fans to pick up exactly who this green behemoth is. Dr. Demonicus goes on to have a long, evil career in the Marvel U in various Avengers books, most recently as one of the Hood’s army of villains in Dark Reign. Red Ronin and the Behemoth show up in Avengers, too. Dr. Yuriko Takiguchi becomes an ally of the X-Men during their San Francisco days until he dies in Uncanny X-Men #515. 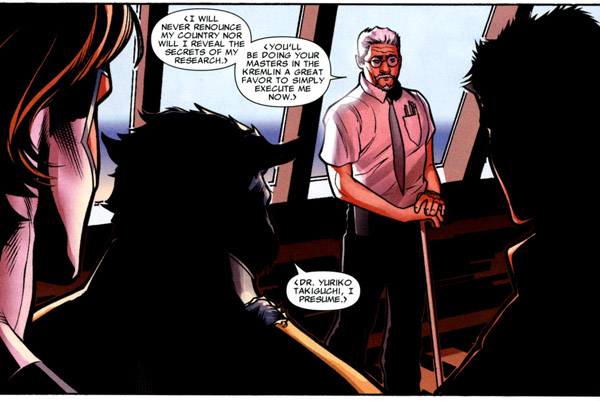 from The Uncanny X-Men #506 (2009), script by Matt Fraction, art by Terry Dodson and Rachel Dodson

I didn’t even mention Godzilla trampling Las Vegas, or stampeding a herd of cattle, getting ridden by a cowboy, battling a rat while shrunken in the New York sewers, being disguised in a Ben Grimm style trenchcoat and slouch hat and fighting off muggers, or pencil-mustached, pipe-smoking supporting cast member Hugh Howards, which suggests that in the Marvel Universe Howard Hughes teamed up with SHIELD to fight Godzilla.

This is wild and over-the-top in the manner of the big, bombastic B-titles of the Marvel seventies, occasionally silly but a great deal of fun. It’s pretty much the platonic ideal of a comic book: lots of action, guest stars, fights, and some nice bits of characterization — for example, the Las Vegas adventure focuses on a gambling-addicted loveable loser trying to hit it big while the city’s being destroyed. It’s a solid, continuous story, thanks to the regular creative team: Doug Moench scripted every issue and Herb Trimpe drew all but two.

Trimpe has never been a major superstar artist to the fans, but his pencils are solid and immensely satisfying in their portrayal of the Big Green Guy. Lots of big panels and splash pages it made for a fast read — it’s maybe one of the early ancestors of Marvel decompression in comic books — but there’s a lot of great ideas in 24 issues, not to mention just being sheer fun. Marvel reprinted the entire series in a black-and-white Essentials volume a few years ago. The book’s sadly out of print (and unlikely to be reprinted), but it’s well worth picking up if you see a used copy.

Along with Easy Rider, you could consider the Godzilla series to be the quintessential American road trip story: the time a big Japanese daikaiju hoofed it across the States from coast to coast, mixing it up with bad guys and making friends along the way.

That said, it’s not even the strangest Godzilla comic book. Dark Horse wins that award for 1993’s Godzilla vs. Barkley.