13 COVERS: Cosplay superstar ANI-MIA has a new comic coming — and she takes a look at some the creepiest cryptids to crawl into our comics…

The comic? Bettie Page and the Bigfoot Bandits, in which the fictionalized version of America’s greatest pinup is pitted against Sasquatch, with art by Jonathan Lau. 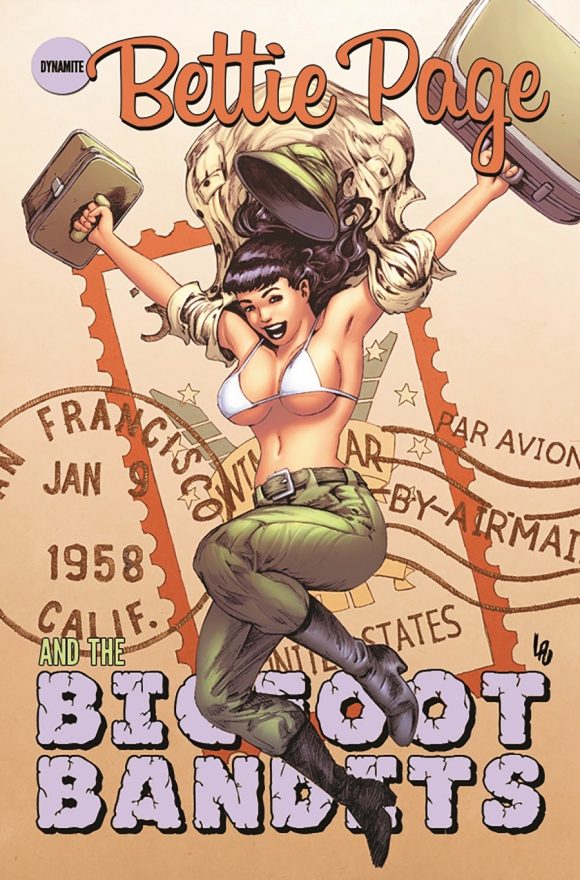 Who wouldn’t want to read that?

Anyway, the good news is that the project is already funded — and that they’re now in the stretch drive. For our purposes here at 13th Dimension, the even better news is that Ani-Mia has stopped by with a special-guest 13 COVERS column that pays tribute to classic comics that have featured cryptids like Bigfoot, the Loch Ness Monster and other creatures that don’t really exist — or do they?

Dig the official description, from Dynamite:

The United States army has suffered a series of break-ins at a top-secret military base and it looks like the culprit is… Bigfoot?! Do you believe? Bettie isn’t sure, but when the army calls on her for help, she’s sure to find the answers. Acclaimed cosplayer Ani-Mia tackles the persona of Bettie Page in more than just look, taking the reins in the writing department! This extra-long one-shot tale is classic Bettie, and like no Miss Page story you’ve seen before! Featuring electrifying art by Jonathan Lau (Red Sonja: The Superpowers, Red Sonja: Age of Chaos)!

Not just that, there will be a series of variant covers, including one starring Ani-Mia as Bettie, as well as other goodies. (Click here for more details.) 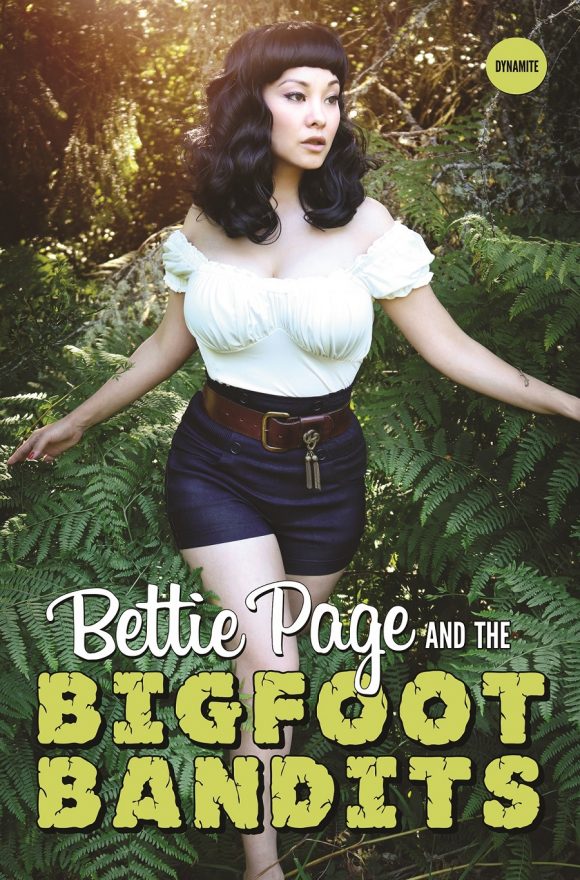 Anyway, between gillmen, mermaids and other boisterous beasts, here’s Ani-Mia with 13 COVERS — from the ’50s to today.

The paranormal has always either frightened or intrigued people. Many cultures have even entwined the other-worldly with their beliefs and rituals. For some, cryptids have an important place in culture — from Native American skinwalkers, the Yeti of the mountains of Eastern Europe and Asia and even New Jersey’s own Jersey Devil.

Lately, Bettie Page has found herself amid the world of the paranormal and continues this streak with the upcoming comic, Bettie Page and the Bigfoot Bandits. But she’s not the only comic hero to find themselves face to face with supernatural beings.

Here are 13 other comics to try out, featuring creatures from another world or in the hidden parts of our own planet Earth.

Damsels Mermaids, Dynamite. Before Bettie Page’s escapades with Bigfoot, Dynamite in 2013 launched Damsels Mermaids, an updated and continuing story of the Little Mermaid fairy tale. Unlike the Disney version of the tale, things didn’t quite end happily for the little mermaid, as she and her beloved are thrown into life-endangering situations and battles. 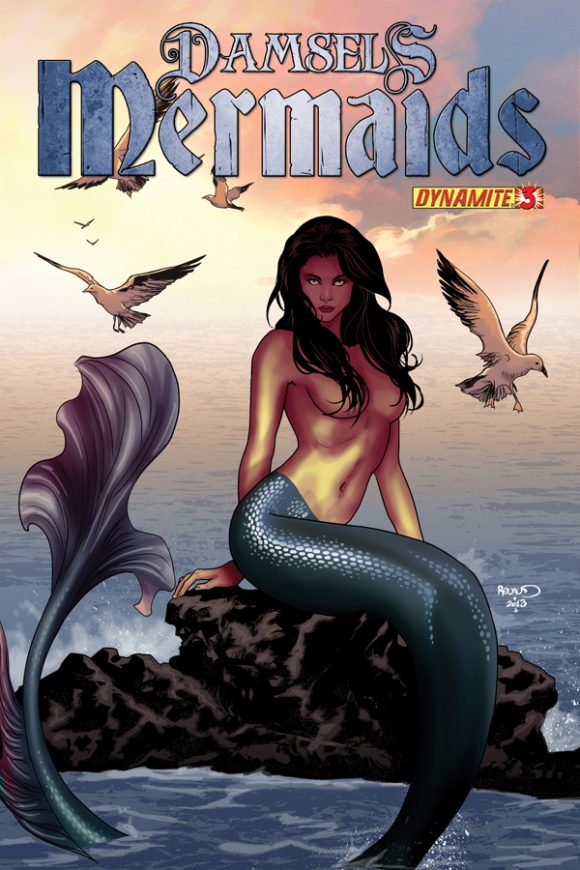 The Creature #1, Dell. When talking about classic cryptids, you have to touch on classic comics like The Creature from publisher Dell. Released in 1964, this comic brings back a time of classic horror icons like Frankenstein and the Mummy. It follows the 1954 movie storyline and features an incredibly rich cover by Vic Prezio  that brings comic art to fine art. 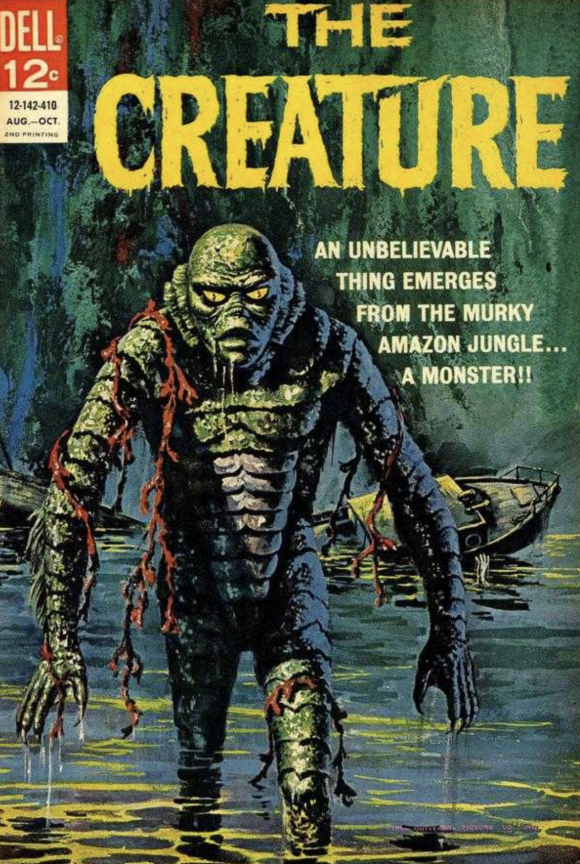 Speaking of the Mummy, this supernatural being has been sought after by numerous groups in comics over the years. One of the most well-known groups to seek out the mysterious figure is… the Scooby gang! They found themselves chasing after a mummy in 2021’s Scooby-Doo, Where Are You? #111. 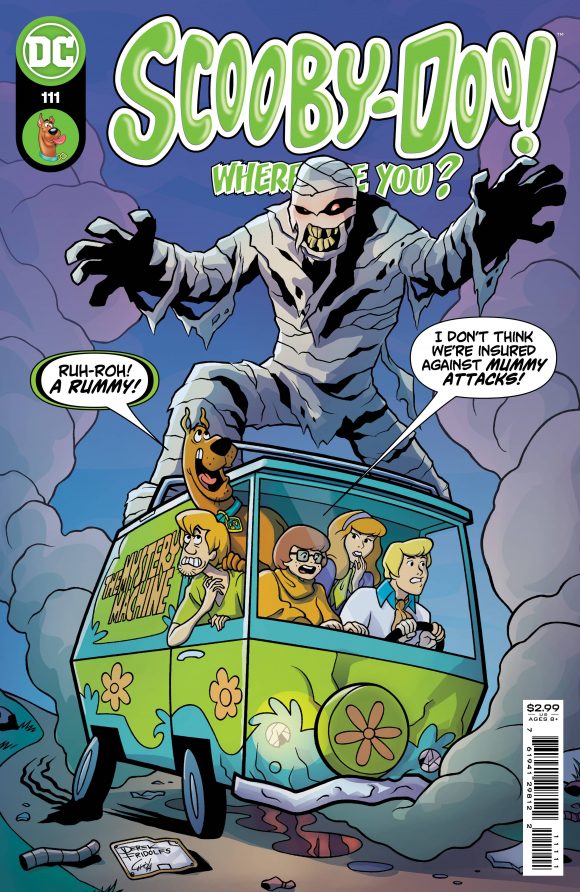 Cryptid covers aren’t just limited to those in the US. This cover from Belgium of Donald Duck’s adventures in Scotland features their famed cryptid, the Loch Ness monster, and involves a marketing scheme thought up by Scrooge McDuck himself. Because, of course he would. 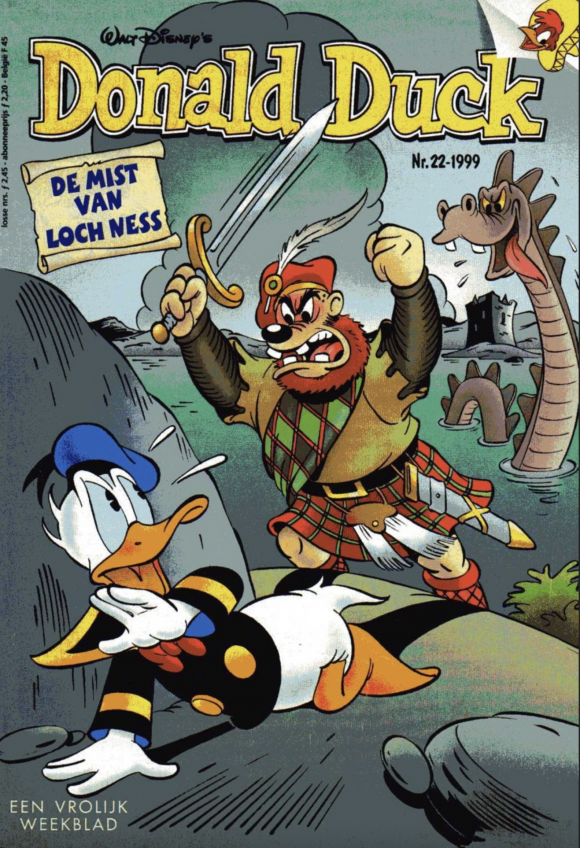 An entire comic written about cryptids, 2013’s Cryptozoic Man, from Bryan Johnson and Walt Flanagan of Comic Book Men fame, is a must read. A middle-aged father finds himself trying to find his missing daughter in Bigfoot territory, only to find out that the world depends on him hunting down cryptid creatures around the world. 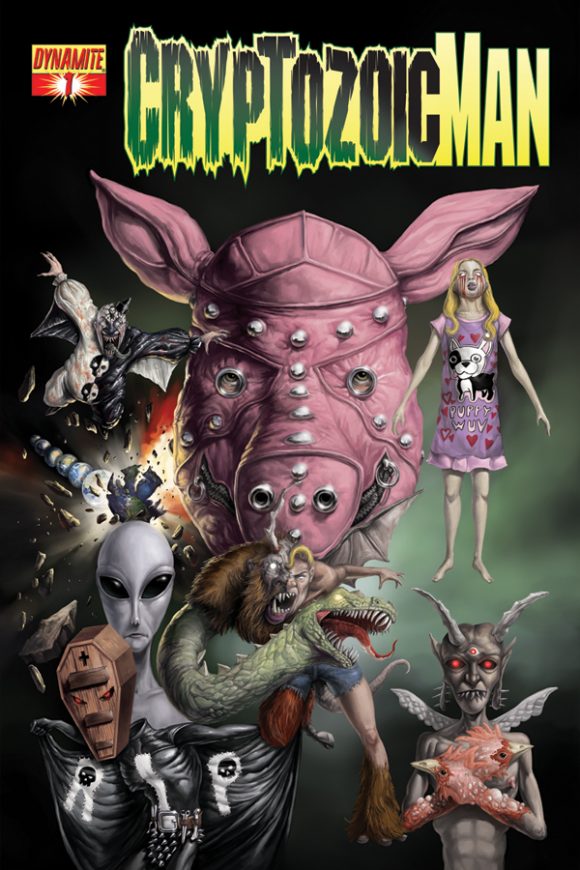 Every Halloween, The Simpsons puts out a new Treehouse of Horror episode and comic, giving their fans a chance to find their favorite characters fending off creatures from Earth, space and even Hell. In Bart Simpson’s Treehouse of Horror Heebie Jeebie Hullabaloo from 1999, cryptids of all kinds are featured, including a possible chupacabra on the cover. Cassie Hack — from Tim Seeley’s comics series, Hack/Slash — has a life that’s filled with creepy killers, death and mayhem, and every now and then she finds herself head to head with otherworldly creatures. In Hack/Slash #9 from 2008, Cassie searches out the person killing students on a college campus, while also leaving their skin behind. The cover features a great glimpse of a fabled snake woman. Afterlife With Archie was a horrifyingly fun series that thrust the Archie gang into a world filled with zombies and supernatural creatures. The cover of the never-published Issue #11 shows the wedding of Archie Andrews and Betty Cooper but their perfect day is inevitably going to be ruined, most likely by Veronica and whatever multi-eyed and tentacled creature is featured lurking behind them. 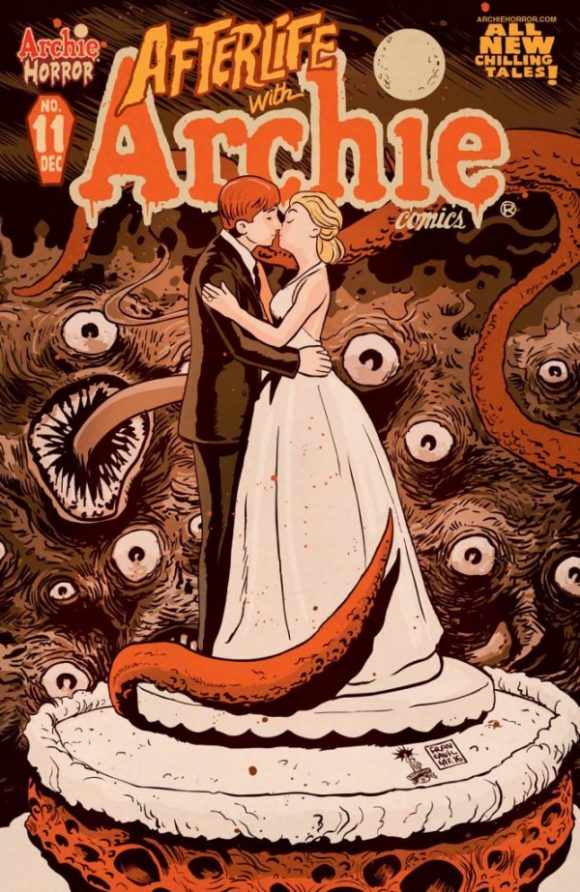 One of the best comic series’ to tell tales of horror is Tales From the Crypt and one classic creature has been featured on numerous covers from the series, the werewolf. This Tales of the Crypt #46 cover from 1955 shows the terrifying werewolf as it stalks the mayor of a small town who has vowed to find the creature that killed his wife. Not only is the cover incredible but the story is well thought out and twisted. 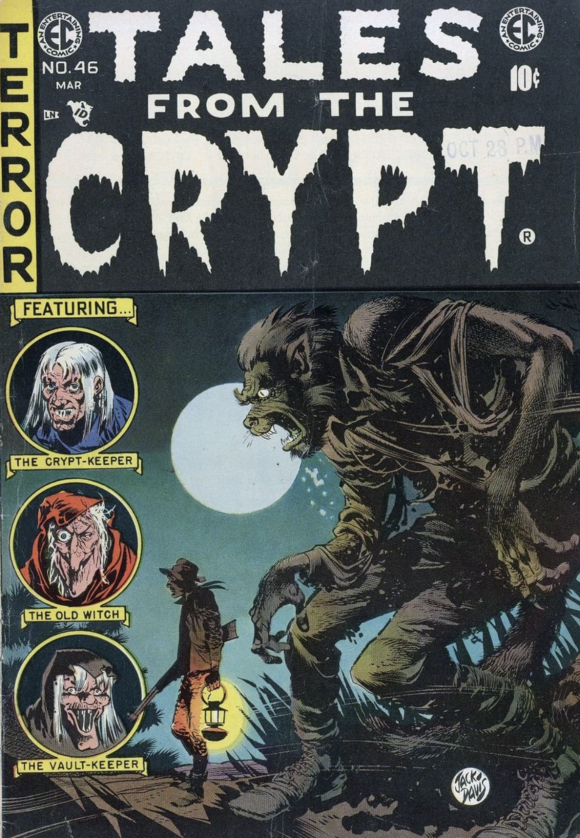 Dynamite Comics’ The Shape of Elvira stars the world’s favorite lady of all things horror and the Mistress of the Dark, Elvira. In the comic, the horror stunner is cast as the leading lady of a romantic film featuring a gill monster. This Dave Acosta variant cover of Issue #3 is a fun play on classic romance novel covers featuring a gilled Fabio and the beautiful Elvira. 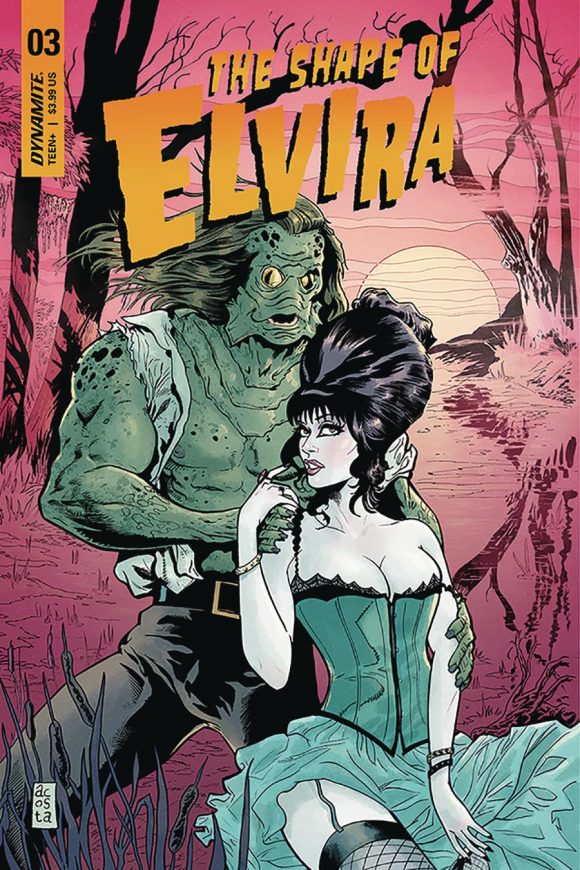 Even comic giant Marvel has had their characters battling creatures from the unknown. In a special edition Marvel Two-in-One #83, the Thing confronts the power of the Sasquatch. On the cover, the Canadian Bigfoot towers over the Thing, prepping readers for an intense battle inside. Even those who have never seen an episode or read an issue of Buffy know that the series revolves around a vampire slayer; but fans know that the series also includes another supernatural creature, a werewolf. In Buffy the Vampire Slayer: Oz, the storyline revolves around Willow’s former boyfriend turned werewolf, Oz, who journeys to Tibet in search of a way to control his other side. And finally, Batman: The Doom That Came to Gotham, a 2000 three-issue mini that revolves around a 1920s Batman going head to head with some of Lovecraft’s nightmarish creatures, including Cthulhu, whose tentacles appear menacingly in the background on the cover. — 13 COVERS: The Legacy and Spirit of BETTIE PAGE. Click here.