IN BAD TASTE: I Love ‘I LOVE LUCY’ Comics

Aimee LoSecco‘s got some splainin to do!

Next up in the back issue treasure trove is an issue of I Love Lucy Comics from 1961. At this point, Lucy has been off the air for a few years, but thirty-five comics were printed from 1954 through 1962. This lucky S.O.B. snagged a reading copy of #33. Get your chocolates unwrapped and knock back a dose of Vitameatavegamin, because this comic is as good as an actual episode! 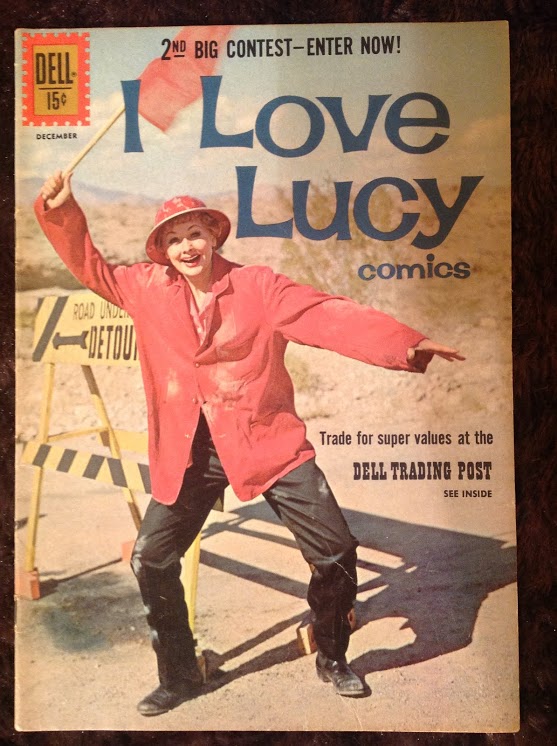 This book is gags galore, and although aimed at teenage girls, it reads better than an issue of Archie.  Three Lucy stories, a one-page gag, a Cyrus Shy filler (I guess either for the boys reading the book or they needed a story with a guy as the lead. Still ranks high on the Bechdel test), a short story, and those beloved ads.

The best thing about the ads? There’s like four of them. FOUR. Just like TV shows back then, this book really reads like an episode. You get your ridiculous set-up: Lucy quickly gets in over her head in a ridiculous situation, Ethel gets embroiled in the hoopla and mishigas, Ricky reigns her in (or tries to), and Lucy leaves us with one lasting visual gag. Sound familiar?  Let’s dive in. 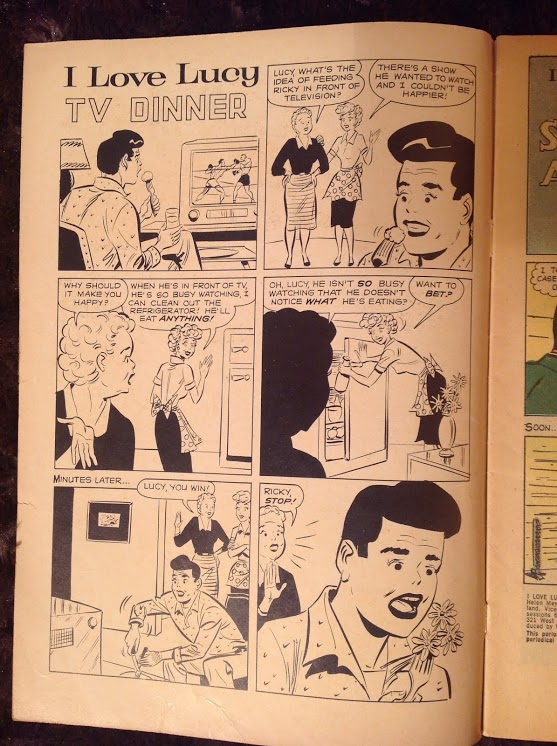 The first story is “Secret Agent.” By the first page Lucy’s already lost her grip, and because they’re not confined to the apartment on East 68th St., this wild goose chase is gonna take us all over town. Lucy finds a prop briefcase and thinks Ricky is an FBI agent, so she enlists Ethel to follow him and make sure he’s OK. Because Lucy would do a better job of protecting a federal agent. The two gals get dressed up in drag, get the actual FBI involved, tear gas bombs get tossed around… y’know, the usual Lucy fare, and she winds up getting handcuffed to a chair for her safety. And everyone’s sanity. 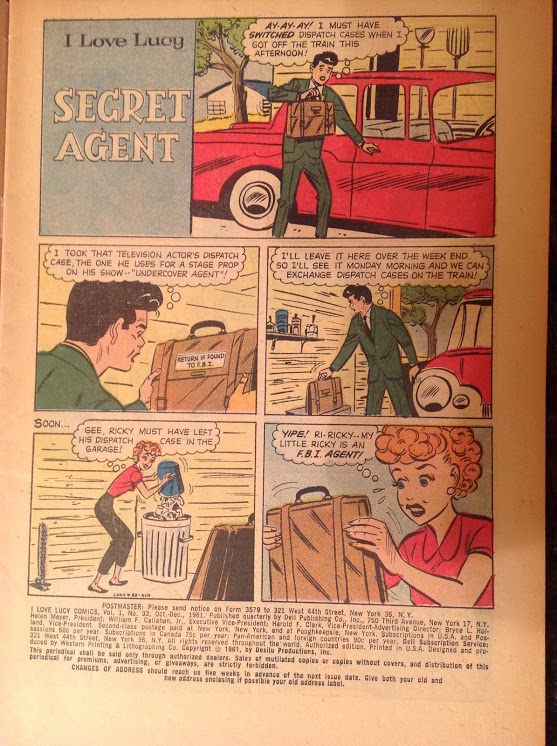 “Secret Agent” off to a fine running start. 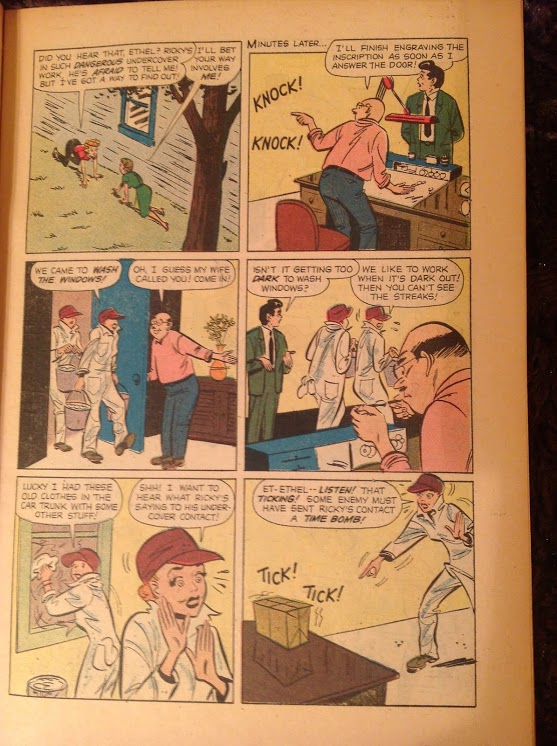 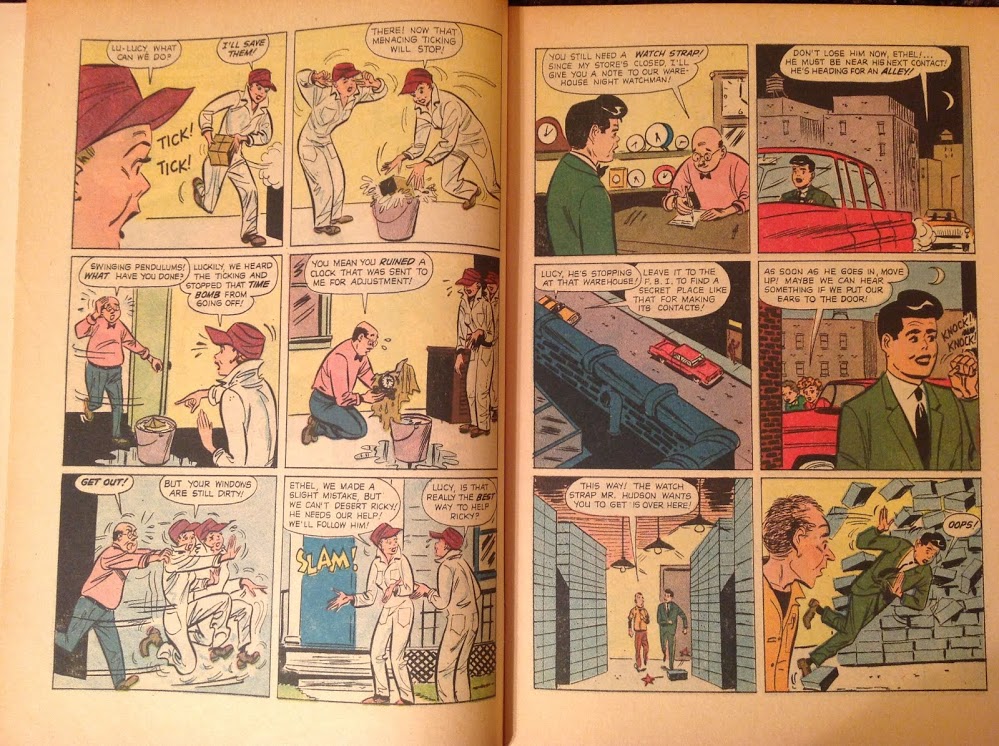 Page 1: Windows, ha! Page 2: That’s some customer service, sending a guy to the warehouse at night with a note. Also, how many watch straps do they have?! And lastly, that damned pompadour and black lipstick just freakin’ bother me. It’s like he got shoe polish all over the place.

The “Cyrus Shy: Finder’s Keepers” is a quickie filler that follows Cyrus as he tries to return a wallet he found to what turns out to be a live TV show. He freaks out at the idea of millions of people watching him, and takes off. The cops nab him for theft and his turn at good Samaritan ends as a thief on the front-page news. 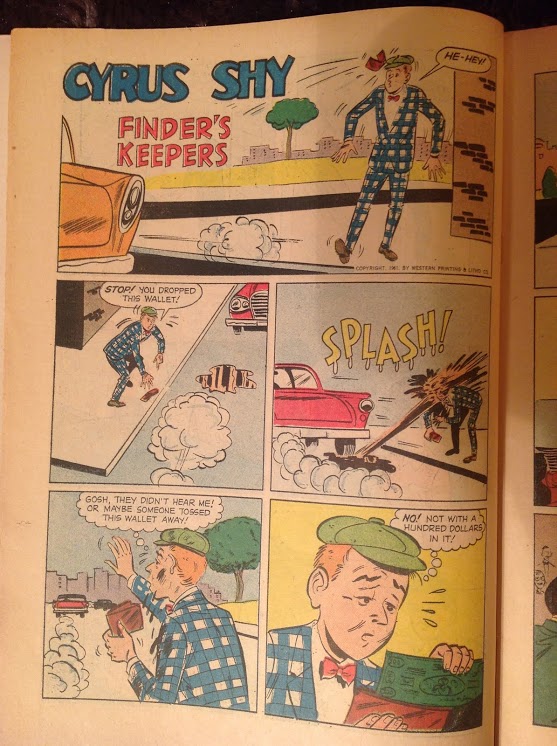 “Fall Fashion” is a prose story of a well-meaning father bemoaning the trials of having a trendy teenage daughter. It’s a little bit sexist, but refreshing that the girl is thrifty and industrious, if a total fumble thumbs. 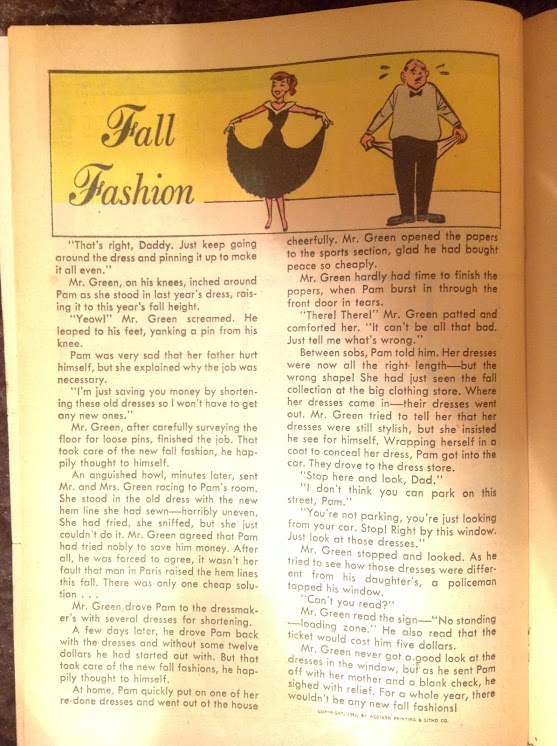 Some things never change, but hemlines aren’t one of them!

Lucy story number two is “The School Bus.” Little Ricky’s bus driver is out and Lucy decides to fill in, with hilarious results. Ethel tags along as bus monitor and adds some extra zaniness. As with many of Lucy’s endeavors, she bails before the halfway point. Considering it takes her all day to get there, she’s completely exhausted at the end. Or what she calls the end. 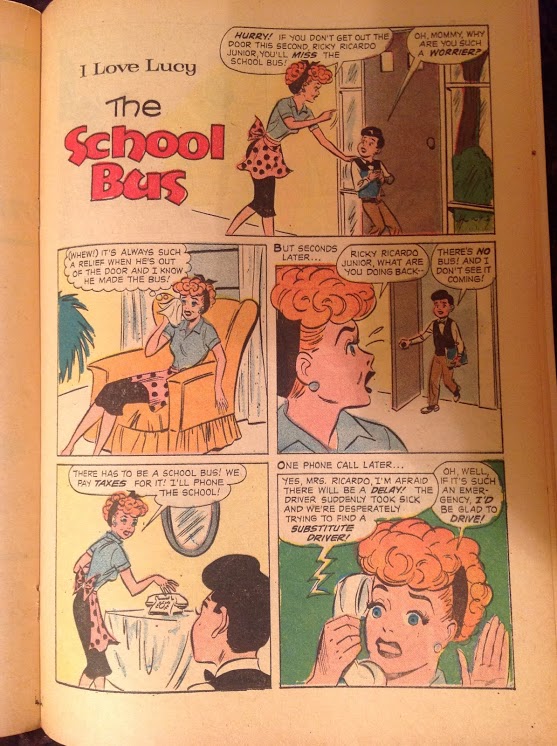 Looks like li’l Ricky’s got his dad’s hair. And lipstick. 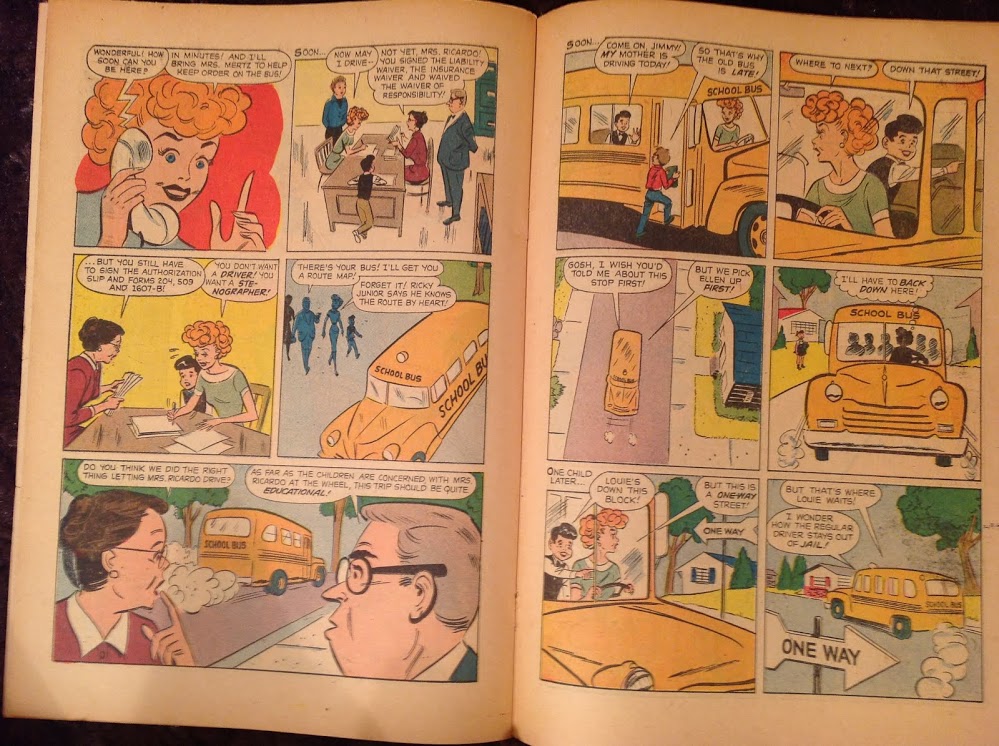 Page 1: Stenographer, ha! Page 2: That little snot Ricky had her pick up his buddies first. Then they take off to play hide & seek. How many of would have the tar wailed out of us? May the forks be with you!

Look at the awesome crap you could get at the Dell Trading Post. What was the catch? You had to cut the tops off of your comic covers. How many copies were desecrated for that Kodak Brownie? Damn, dude. 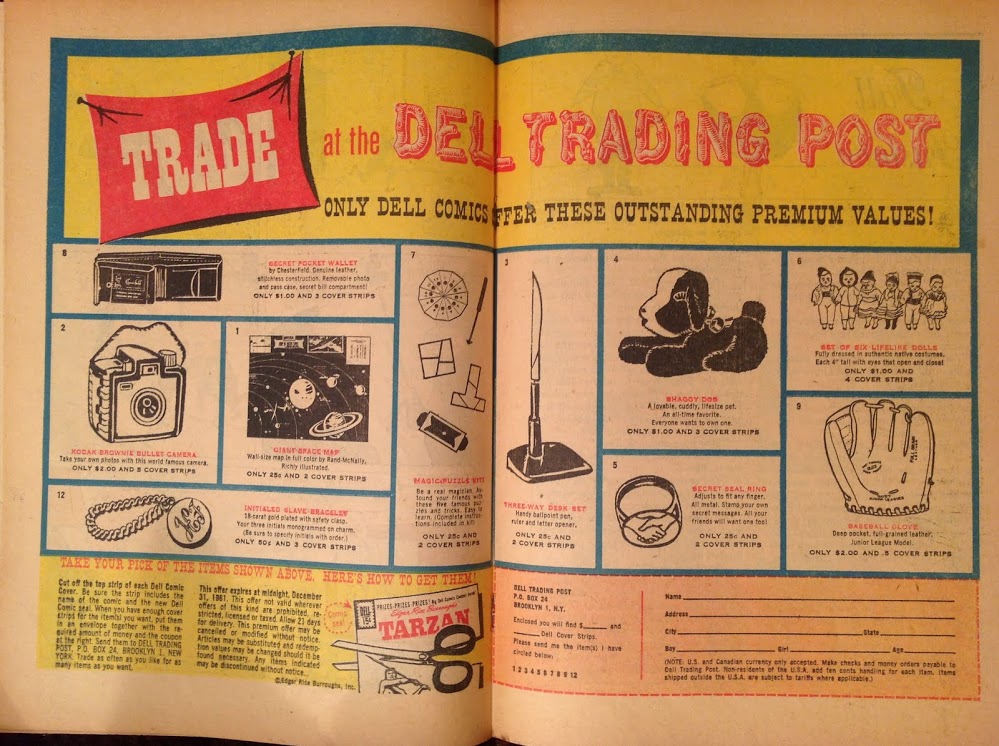 A pen set? Like you’re not going to get two or three for your bat mitzvah.

“Calories Anonymous” is the last story in the comic, and probably the best, so I have it here in its entirety. Lucy and Ethel start a dieting club with their girlfriends to curb each other’s cravings. Lucy, in her zeal to keep her friends slim and trim, ends up bursting at the seams. Why? She’s scarfing their food faster than bonbons off an assembly line. 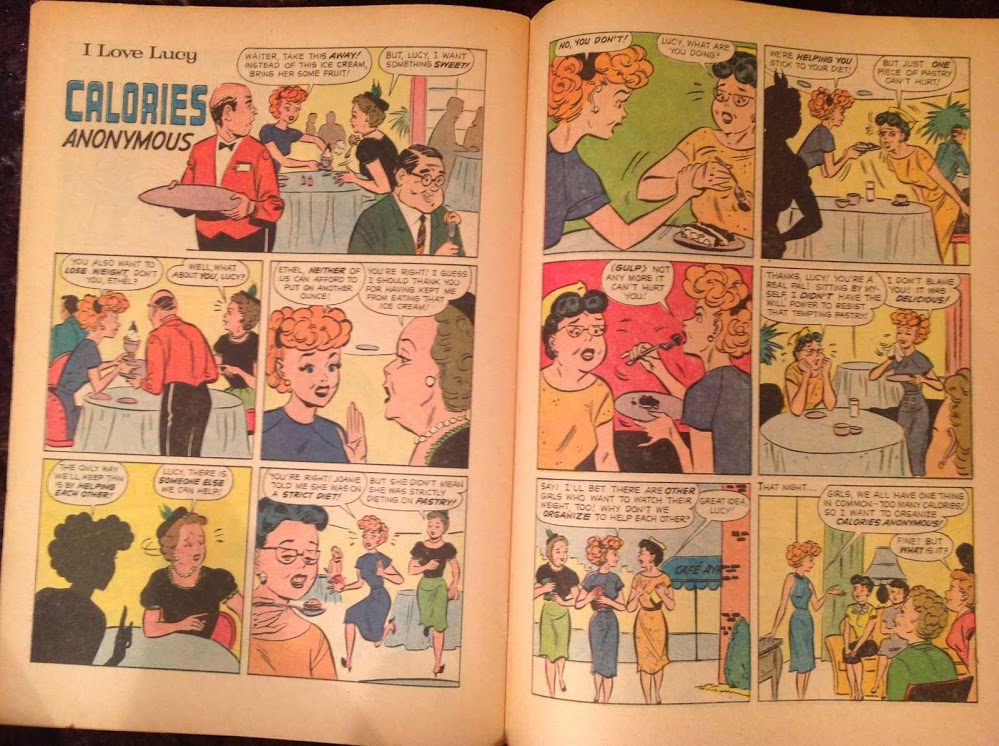 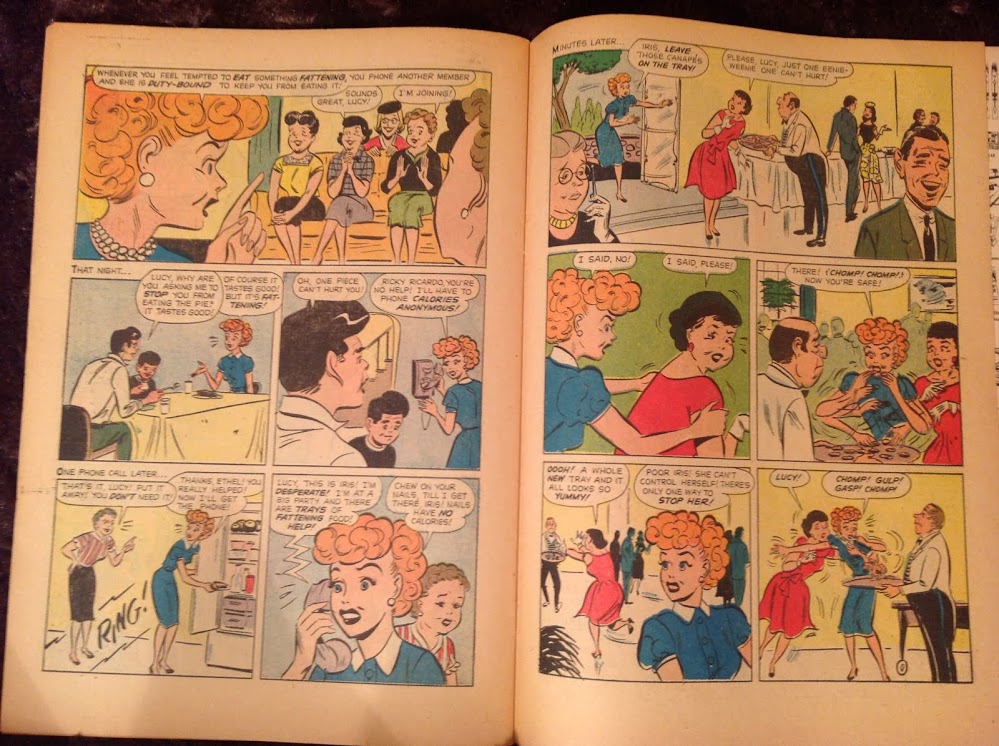 You’d think that she’d be burning some serious calories with that buzz saw bite of hers. Look it those speed lines! Ricky’s lipstick is perfect, even in the middle of the night. Page 1: I always thought Tyrone Power would be the perfect filling in a Lucy and Ethel sandwich. Page 2: These prizes are WAY better than the crappy ones when I was a kid (See: A Trip to 1987)

Nothing wraps up a good comic or TV show like a cereal ad. Granted, it’s really for the Huckleberry Hound Fan Club, but you can’t miss that box of Corn Flakes. Or the two gay mice. “Our vegetables! They’re trying to steal OUURRR vegetables!” Now that’s classic! 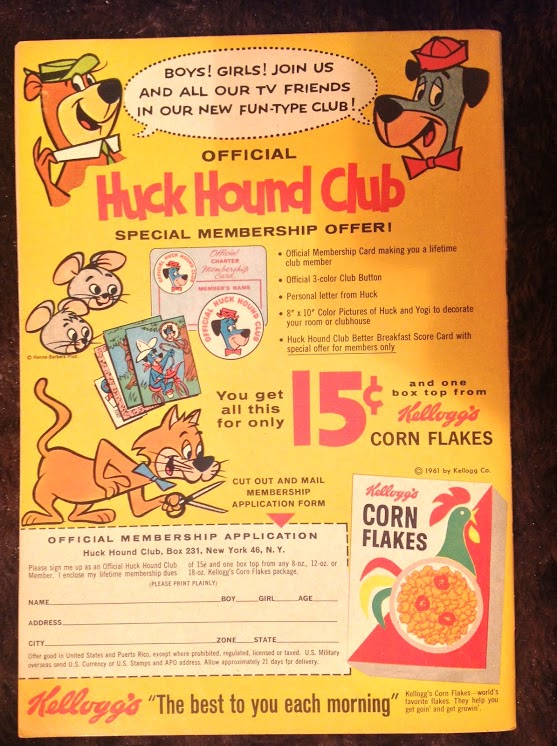 For some reason I hear the Beatles’ “Good Morning, Good Morning” in my head. Dammit, now I want Corn Flakes. Fifty-three years later and the ad still works…