Ah, comic conventions. Nothing makes me happier than to see old friends and colleagues at a local con, make new contacts, get sketches, or impress a chick with my haggling prowess. This convention I had another mission. One that started out with, “I’m not buying anything” turned into a tidy sum spent on a treasure trove of ridiculous back issues.

What was my first purchase? Two copies of Alf for a buck. My God, how could I say no?

I’m going to take you all back to my first foray into heavy comic collecting when I was 10 years old. That sweet $2 allowance went to a comic and two packs of Alf cards. Groo, Elfquest, Thundercats, Muppet Babies, Heathcliff, G.I. Joe, Peter Porker … Oh I found tons of that crap at the con. … And more!

You lucky S.O.B.s get to take a trip in the Wayback Machine to 1987 with me for this first batch of back-issue madness.

First up is Alf. The content of the comics isn’t anywhere near as important as the ads. Why?

Probably the repetitive branding that was seared into our impressionable brains and resurgence in the past few years of retro commercial mascots like Charlie the Tuna, Count Chocula, and the Pink Panther. If someone brought the LaChoy Dragon back, I think I’d s### my pants. Why Madge, you’re soaking in it! 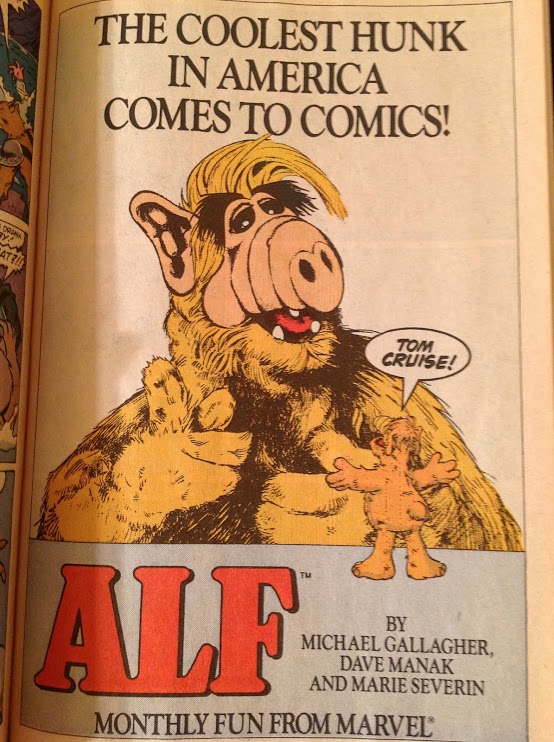 Before I make the obvious joke, both Alf and Tom Cruise had the best hair in the business. I s### you not. A puppet from outer space and a … puppet … from outer … space …

Thetans! I found this ad in a copy of Thundercats where Snarf has to babysit some baby bear creature. It reads like an old episode of Tom & Jerry, only without the social commentary or witty repartee. Thetans!

I’ll go through two issues as methodically as the 10-year-old mind can muster. Covers, cereal, toys, comic subscriptions, that was pretty much what the publishers and ad makers were focused on.

Oh yeah, and some of the actual comics too, just for kicks. 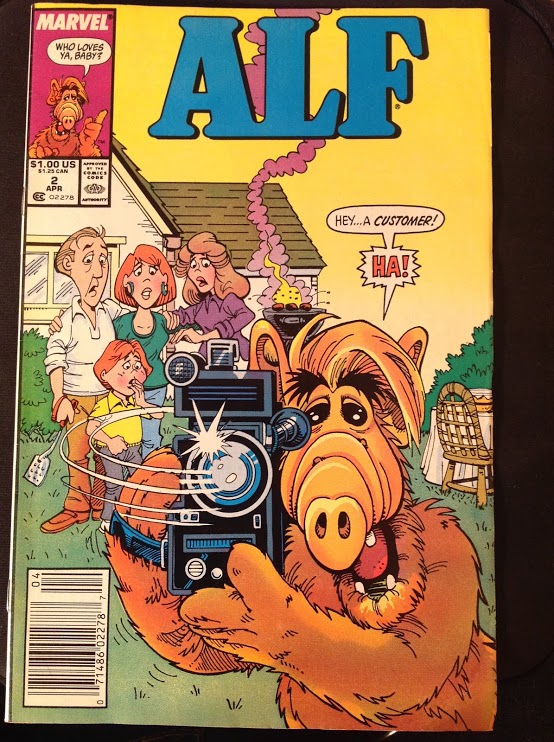 Kids, this is what a state-of-the-art camcorder looked like. A camcorder is what mommies and daddies used to take video before iPhones and HD and Netflix were words. 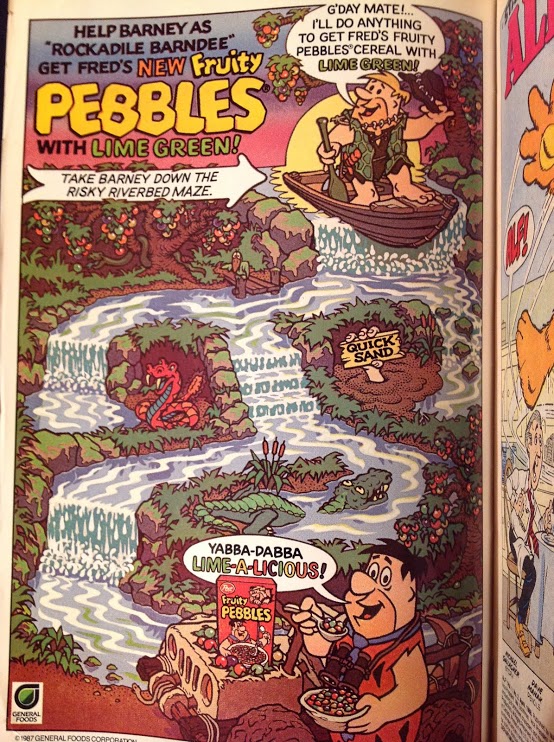 Is a new flavor in cereal still a major event? Also, Americans were obsessed with Australia after the whole “Crocodile Dundee” phase. Apparently so much that we couldn’t figure out two lefts could get Barney those sweet, sweet Fruity Pebbles he lusted after so vehemently. If he was smart, he would have just held Wilma for rock-ransom to get them. Rock-problem solved. 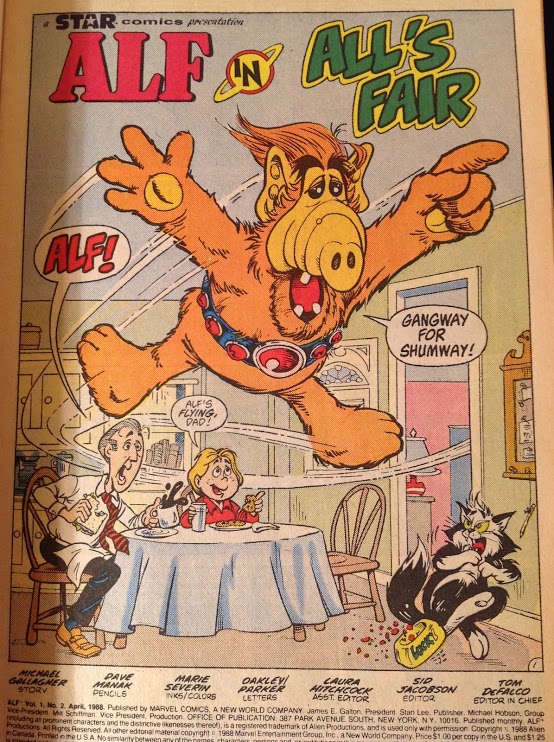 This makes sense only to anyone who watched this show religiously. And bought the trading cards. Ha! I kill me! 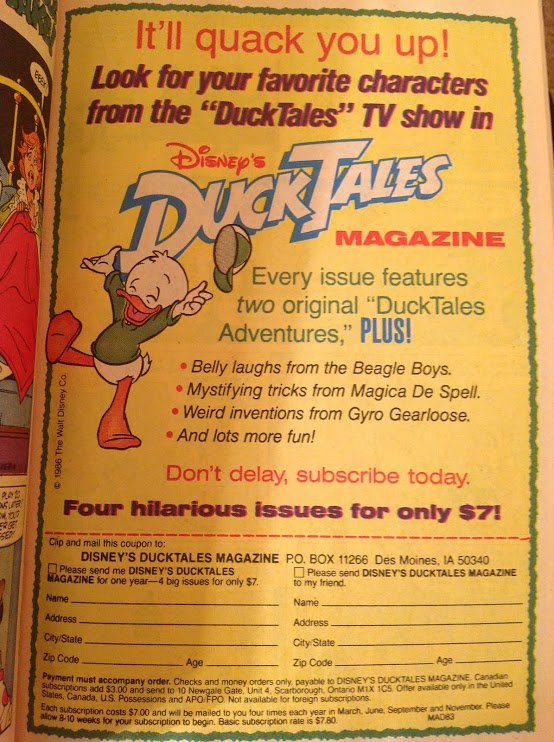 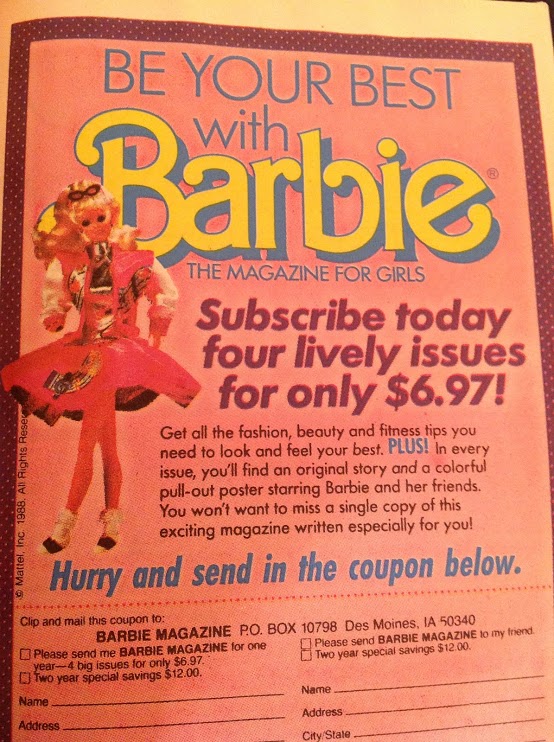 My kingdom for Betty Friedan right now. DuckTales Magazine. What do we in the business say about anything Donald Duck or Uncle Scrooge? “It don’t go bad.” You know how much these are worth now? More than these Barbie mags. Don’t get me started on Barbie. That’s a column for me, Batwoman, and Gloria Steinem to tackle. 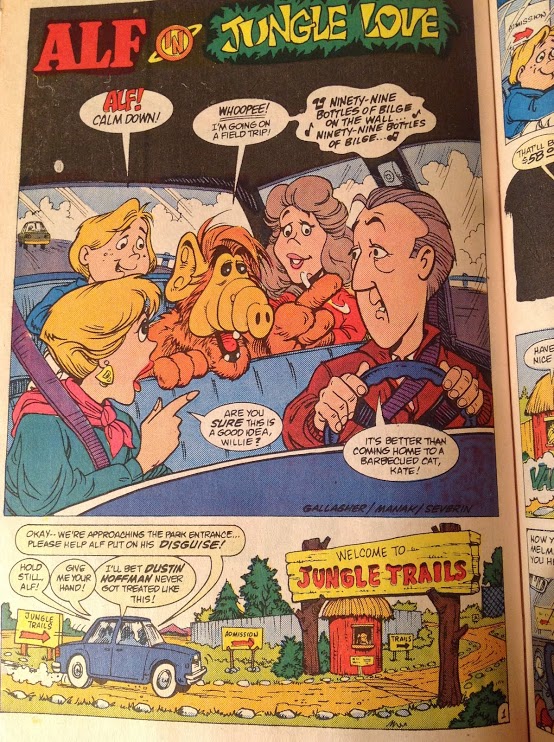 Dustin. Hoffman. Because every 10-year-old knew who he was. Actually, we did. Kinda. 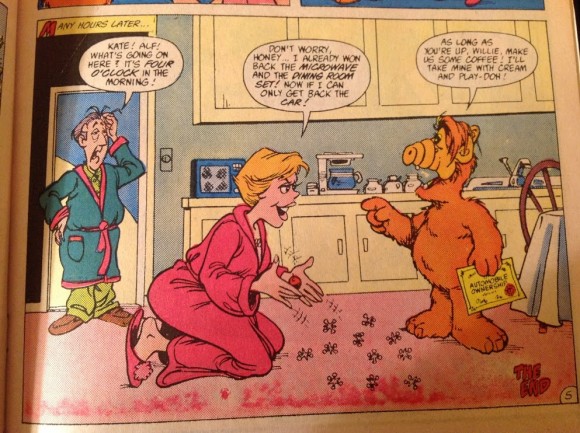 He really did take it with Play-Doh. The part about cream was B.S. 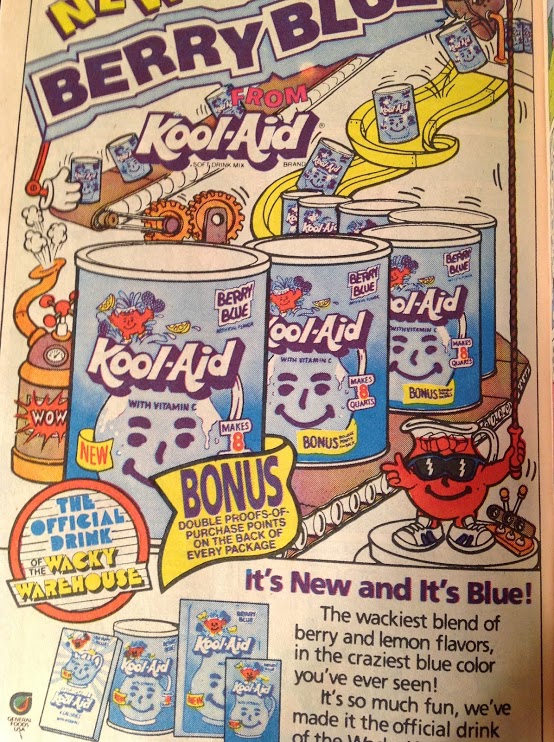 This s### was delicious, and my mom refused to buy it. One friend’s mom did, but she was so cheap she made it like blue water and served it in Dixie Cups. And then complained if you wanted another one on a 92 degree July day. We were such wastrels. 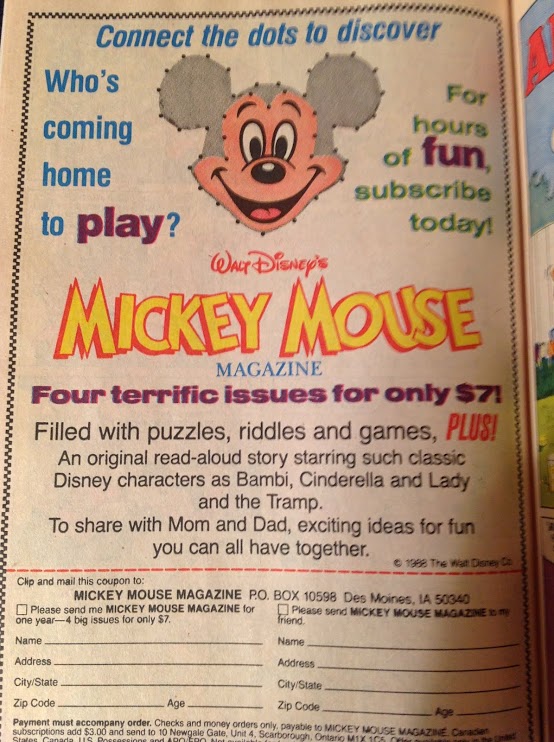 Seriously, worst connect-the-dots ever. Clearly you think your readers are too stupid to recognize the most heavily-branded image since the word “Coke” got a wave underneath it. I think we get it, Captain Obvious. 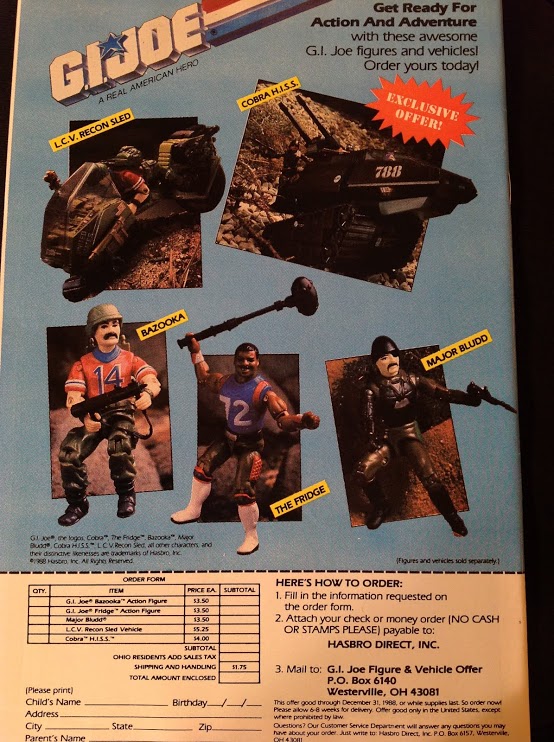 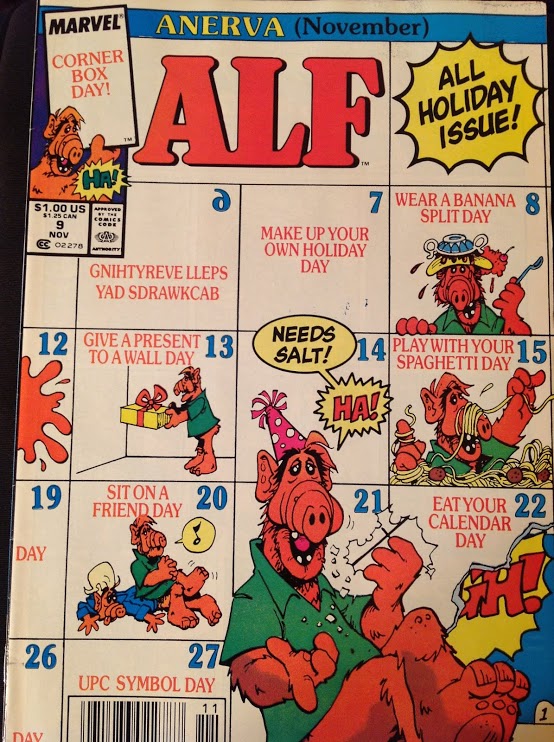 Okay, that “Give a Present to a Wall” is actually pretty funny. 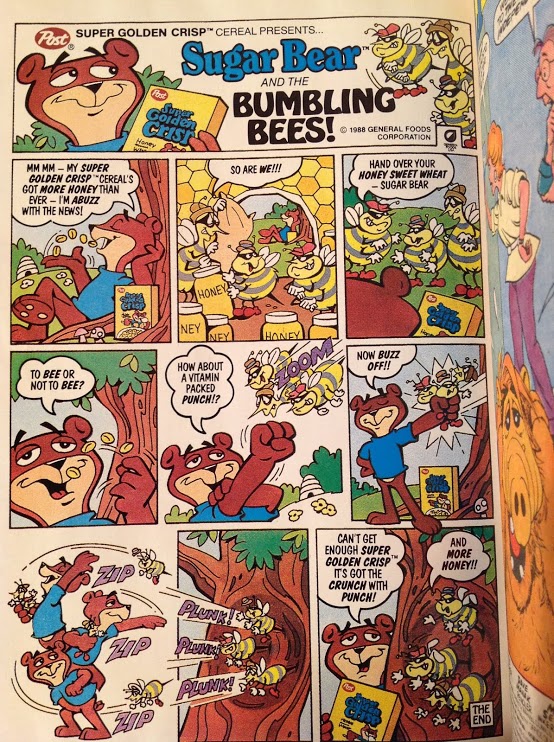 Isn’t this the same stuff as Sugar Smacks? Oh wait, the Internets inform me that it’s been renamed a much healthier-sounding Honey Smacks. Whatever. It still tastes like crap, doesn’t fill you up, and the mascot looks like he’s selling weed behind the playground. Open your eyes, you sleazy d###! F###ing Huggy Bear wannabe. 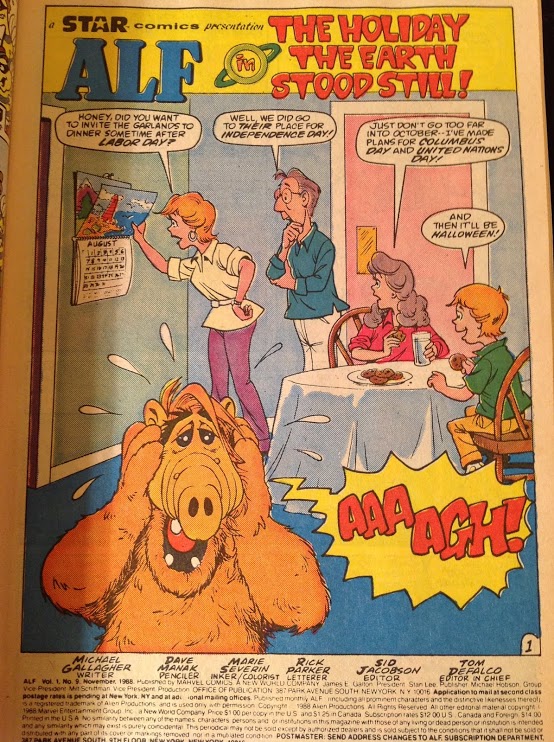 So, United Nations Day is a thing. Let’s celebrate with international coffees fortified with a shot of international liqueurs. Ole! Yeah. A Gore Vidal reference. Because the Dustin Hoffman one just barely scraped over our foreheads. I don’t know why, but I find this vaguely racist. Are the Cleveland Indians still a team? Wasn’t there a Charlie Sheen movie about them sucking balls back in ’87 too? Man, they took an ass-beating back then. Heh, “straight men.” I love gay schtick. 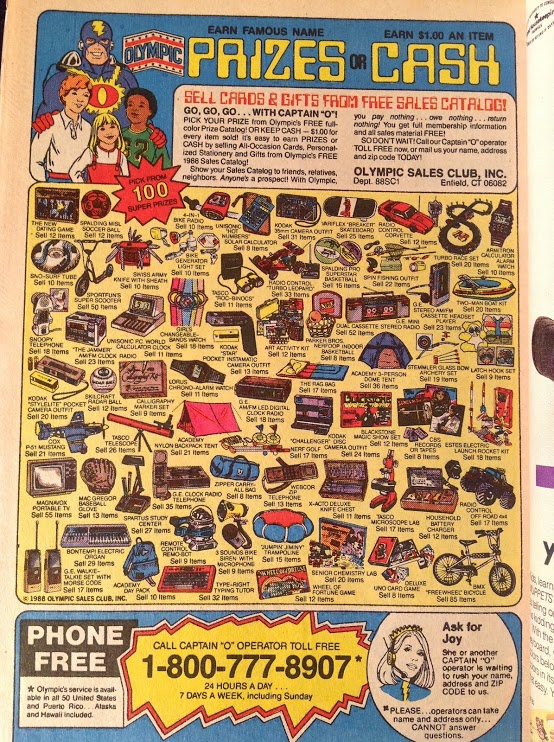 Every kid dreamed of selling whatever these “items” were for the awesome prizes. A TV or a dirt bike or a boom box were way out of reach for lazy kids like myself, but I was sure I could sell eight items for that killer Michael Jackson cassette. Or I could listen to it at my friend’s house while we sipped our blue water and nibbled on Golden Crisp from our high-end Dixie Cup place settings. 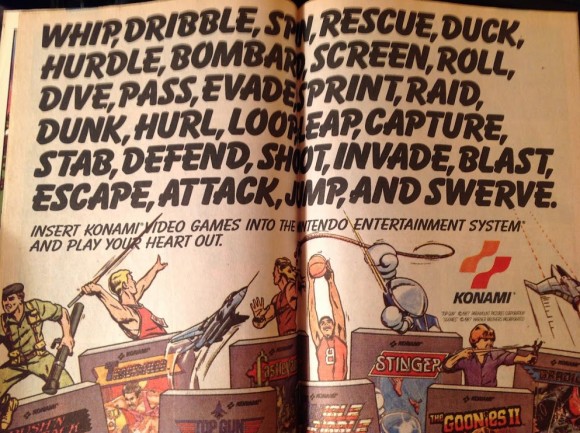 Oh, Konami. You made the greatest worst games. You also made the greatest ads. I only had Castlevania II, but man did I want every game they advertised! Except Rush’N Attack. Even then it seemed kinda xenophobic. Say it out loud. From the letters page: Yes, Raul Julia was considered a sex symbol for 13 minutes in 1987. What’s f###ed up is that my first thought upon reading this list was to count how many are dead. And yet James Taylor is still walking around. Because the four-year-old here who just learned his colors can read the rest of the ad and eloquently request the new Casio EP-20 Muppets keyboard. I can’t take a kid with a Dorothy Hamill haircut seriously anyway. Oh, Silverhawks. Partly metal, partly real. These were like the Voltron of the bird world. If you had the big hawk action figure, you were the king. Like any kid that had the Millenium Falcon, or the G.I. Joe Carrier. Nobody in my school was loaded enough for the Joe Carrier. Maybe one kid, but her parents had a Ms. Pacman table video game in the living room. That kinda beat any toy helicarrier. But I digress…

So there ya go! Stay tuned next time for some more time-traveling fun, minus the creepy Doctor Who theme song.