Ryan Dunlavey — artist of The Comic Book History of Animation (among other popular projects, such as Action Philosophers) and one of the architects of BATMADNESS, our Batman: The Animated Series tournament — is back with his third and final TOYHEM 2020 column. It’s a familiar topic — Megos — but filled with compelling twists and turns.

In the summer of ’77, when I was 6 years old, my family and I were visiting some extended family in my parents’ hometown (we lived several states away). As we were pulling out of the driveway of my uncle’s house, our 12-year-old cousin jogged out and handed my little brother a half-full brown paper grocery bag through the window: “I don’t play with these anymore — but you guys might like them!”

As the car pulled away we opened up the bag…

…and it was FULL of Mego superhero dolls, about a dozen of them — more than we’d ever seen at once. We almost peed our pants.

My brother and I didn’t have a whole lot of toys when we were younger. We weren’t poor, but our parents were young, my brother had health problems and my dad’s job required us to move often — extravagant toys just weren’t in our lives at that time. 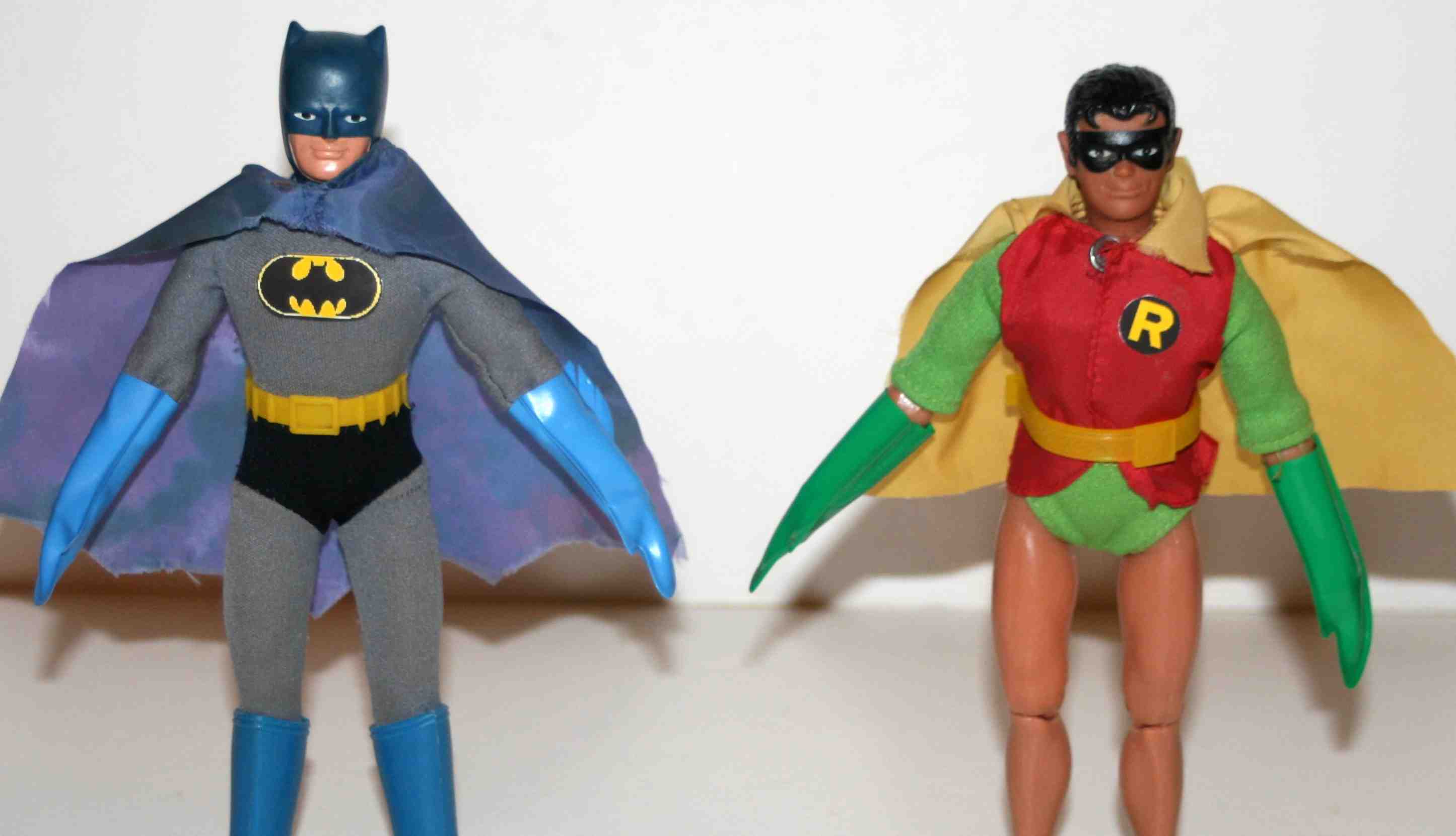 We had the basics: wooden blocks, baseball gloves, bikes, board games, some Hot Wheels cars. I also had a couple of stuffed animals — which my brother couldn’t have because it triggered his asthma. And we’d gotten Batman and Robin Megos the previous Christmas; they were our favorite toys but my brother and I were very much “outdoor kids” (in spite of his health problems), preferring to dig in the dirt and run around the neighborhood with other kids.

So by that summer, those Batman and Robin dolls were absolutely TRASHED: missing capes, gloves and boots, outfits stained and ripped and dirtied beyond rehabilitation. We knew there were more superhero dolls out there — our friends had them and we saw them in the stores all the time — but we never thought we’d get any.

In the grocery bag, duplicate Batman and Robin dolls were right on top and in WAY better shape than the ones we had back home. There was a Riddler too — finally a villain! There was also the Hulk and Aquaman (whom we knew) plus a bunch more that we were only vaguely familiar with: Thor, Captain America, Iron Man, Conan the Barbarian and some chubby weirdo in an orange suit (Mr. Mxyzptlk) that we didn’t recognize at all so we just pretended he was the Penguin. In addition, there were two larger GI Joes – Bulletman, with his shiny arms and helmet, and Eagle Eye, who had a lever in the back of his neck that moved his eyes from side to side.

All of them had barely been played with and even still had a lot of their boots, gloves and accessories.

And there was one more superhero that neither of us had EVER seen in comics or cartoons. One none of our friends owned. One we’d only ever seen on the backs of the toy packages at the store. My best friend and I had debated about whether or not he actually existed.

He was a myth. A phantom. A legend.

It was THE FALCON! 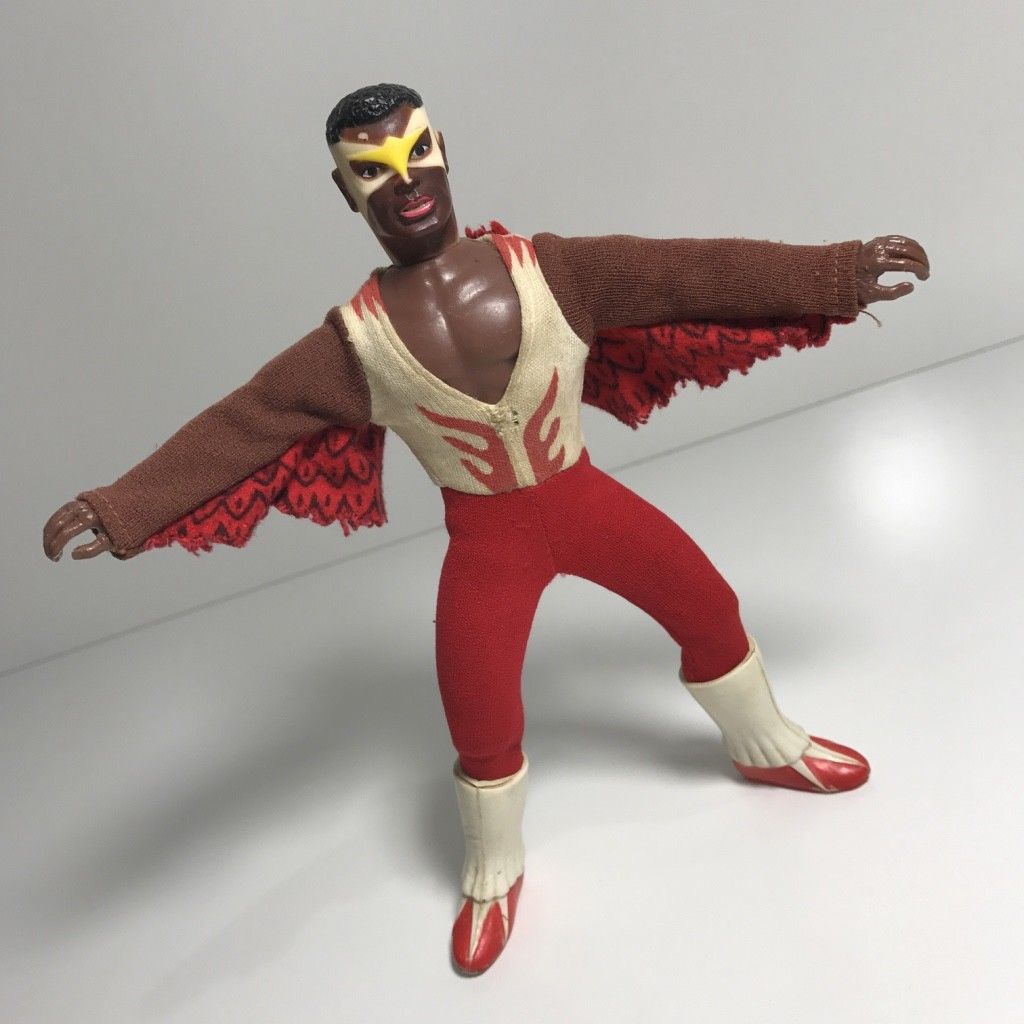 The Mego Falcon doll was so much more awesome-looking than all of the other figures. I pulled him out of the bag and I just stared at him — I couldn’t believe he was real, and that was I holding it, and that he was OURS. All the Mego dolls had a charming awkwardness to them – the stupid oven mitt gloves, Batman and Cap’s doofusy smiles, Iron Man’s FABRIC armor, Conan’s dorky puffed up hair — but not the Falcon. The Falcon was 100 percent cool.

His wings were part of his costume — they moved as you posed him and never fell off and got lost. His boots were rubber instead of plastic so they didn’t slip off his feet. His expression wasn’t goofy or smiling or cartoonish — this guy was ready for some serious crime-fighting business. 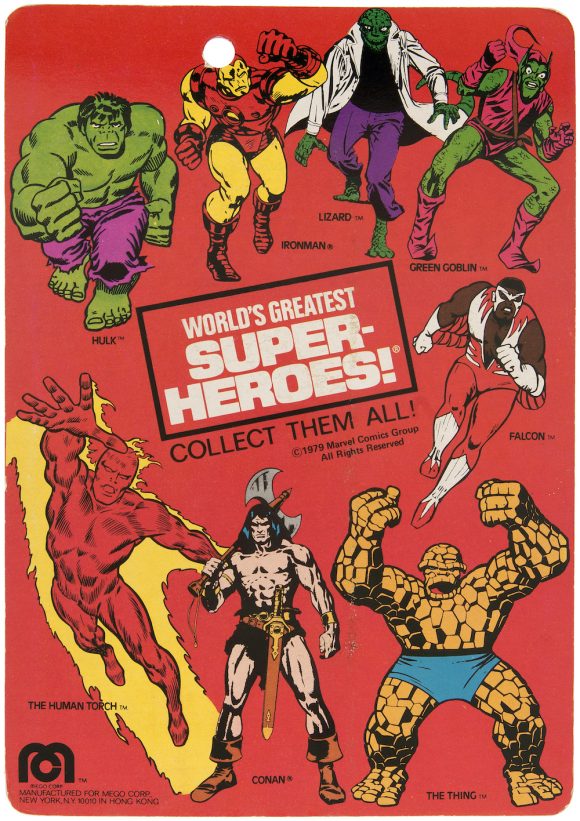 Most obviously, he was the only Black character in the entire line and his red-and-white outfit looked AWESOME, so he really stood out. As someone who always felt outside of and different from everyone, I’ve always felt drawn to fictional characters who were a little different or off-center than the ones around them — and the Falcon fit the bill perfectly.

Now my younger brother and I were SUPPOSED to share all of the dolls but he ended up hoarding most of them for himself — except the Falcon. The Falcon was MINE and he very quickly became my favorite out of all of them. I would put him in a flying pose, hold him over my head and exhaust myself as I ran around the yard making him “fly.” During playtimes he easily replaced Robin as Batman’s superior bird-themed crimefighting partner.

That grocery bag full of Megos that our cousin gave us became the centerpiece of our childhood playthings (even after Star Wars toys came out a year later). But after a few years I still didn’t know who the Falcon really was! I’d never seen him in a comic or on TV. 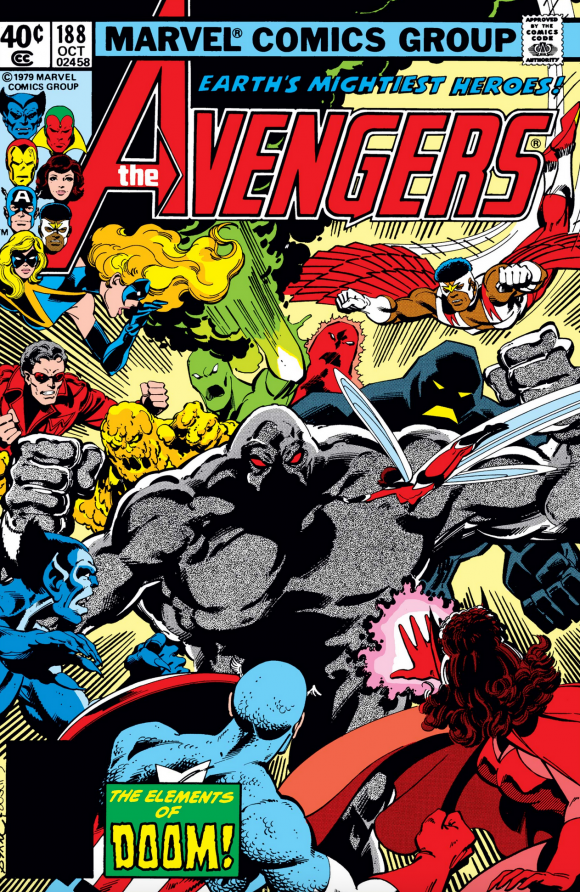 But then one day in the drug store on the cover of a comic I’d never noticed before called The Avengers — there he was! Fighting “The Elements of Doom.” Shockingly, my mom bought it for me — and I really liked it! The Falcon in the comics was a bit different than the one in my head, but he was still cool. I kept getting Avengers comics whenever I saw them (not often) and a few years later I was able to get what would instantly become my favorite all-time Avengers comic ever: Avengers Annual #10!

This whole issue — written by Chris Claremont and drawn by Michael Golden — is such a treat from start to finish, chock full of classic Avengers: Cap, Thor, Iron Man, the Vision, Scarlet Witch, Beast, Wonder Man and Hawkeye. (The Falcon was disappointingly absent). Spider-Woman guest-starred and she was 1,000 times more cooler than she was in her dopey animated show. 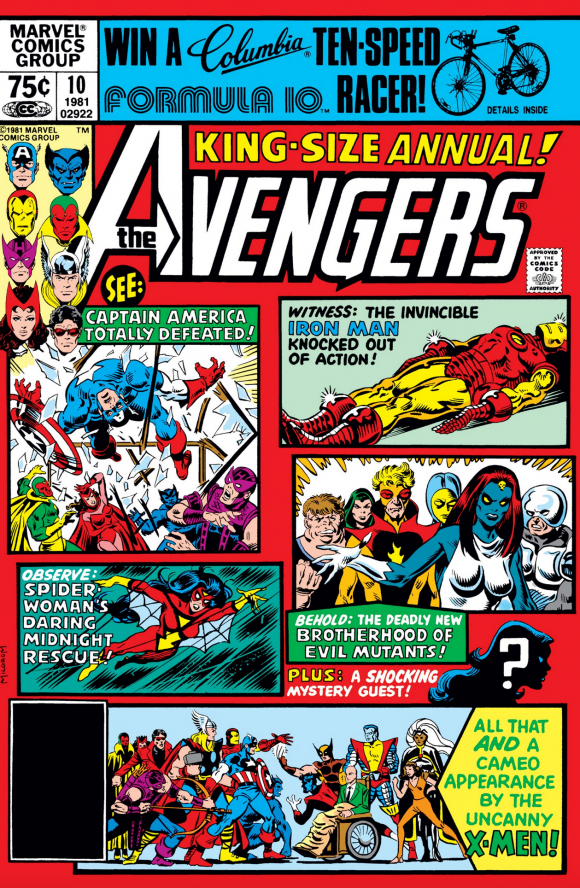 The story and art were amazing and it was jammed with weird characters I’d never heard of before: Wolverine, Nightcrawler, Nick Fury, the Brotherhood of Evil Mutants and the first appearance of a brand-new character who nearly took down the Avengers single-handedly and whose powers utterly TERRIFIED me, named Rogue. It was easily the best comic I had ever read in my life (even if the last scene was confusing to my 10-year-old mind) and I read it over and over and over. The comic left a huge impression on me. I loved it.

Aside from my Falcon-fueled occasional Avengers habit I still wasn’t big into comic books — I was more into video games, baseball, science (nerd) and racing my mini bike. But then a few years later my family had moved again and I was at a new classmate’s house and he had a BIG stack of X-Men comics — and right on the top was Uncanny X-Men #171 — the one where Rogue JOINS the X-Men! Wait — WHAT?! I was incredulous: The VILLAIN from the Avengers annual is now good?! HOW IS THIS POSSIBLE?!

I had to read it. 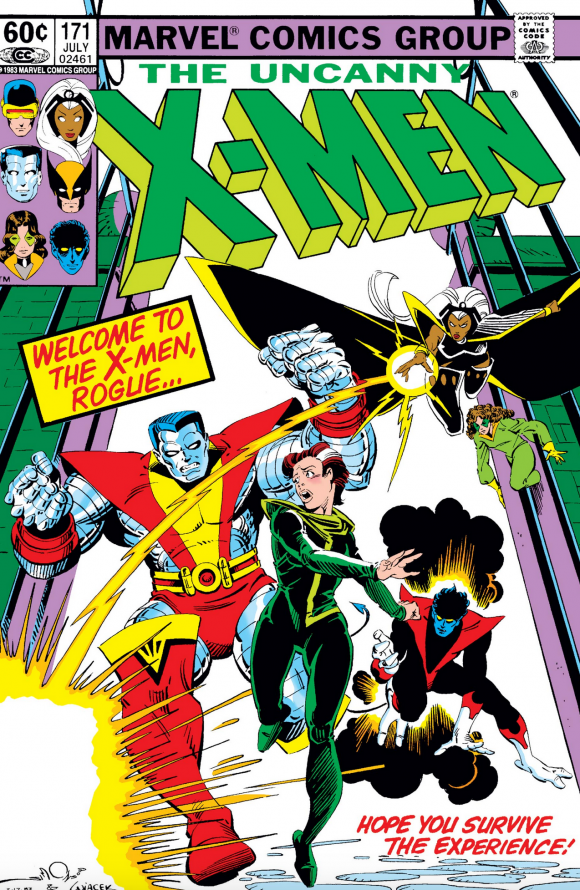 Once again, my mind was blown away by a comic. I was expecting some kind of hokey trick in the story where she goes back to being a bad guy at the end, but that is NOT what I got — Rogue’s cartoonish, cackling villain facade was gone, leaving just a scarred, vulnerable teenager (not much older than I was at the time) who’d been put on a terrible path and just wants to get off. Rogue’s transformation from villain to hero was the first time I remember seeing a fictional character that didn’t have a black-and-white alignment — she had flaws, she changed and grew, she was (to me at the time) REAL.

I had never connected to that kind of character depth in the movies or TV shows I’d seen — but I saw it in a comic book. I was hooked. I spent the rest of that day reading every X-Men comic my friend had (about 20 issues, including all of Paul Smith’s stellar run as artist). When my mom picked me up, I asked her when I could go buy some comics and for the next few years comics became my obsession, Marvel in particular. X-Men quickly became my favorite comic and Rogue was my favorite character.

My tastes would evolve as the years went on, but that was it — that was the moment I became a comic book reader for LIFE. Pretty soon I was trying to draw my own comics… then taking as many art classes as I could… then applying to colleges with illustration programs… and then I was joining a club that made its own comics where I met a writer/film student named Fred Van Lente.

All sparked by a Mego Falcon doll I got in a paper bag! 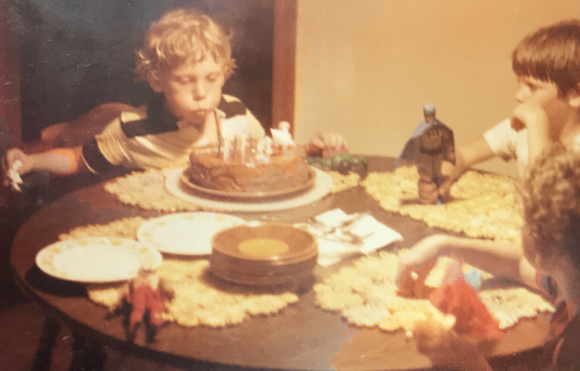 Ryan’s 8th birthday, with a special appearance by the Falcon (on the lower left). Ryan’s brother is in the foreground with Thor. A neighbor is clutching Batman.

After time, all those other figures eventually got lost or damaged and discarded but I held onto the Falcon for a LONG time, even after the paint wore away from his mask and boots and his wings became loose and frayed. He seemed built to last. I know I still had him well into my teens but I can’t recall his final fate — he must have been sold at a yard sale or tossed in the trash or left behind one of the times we moved — I think my brother’s Hulk was the only one who lasted longer: first he lost a forearm, then a foot, then his PANTS — and that was the end of the mythic grocery bag of Megos.

It was one of the best presents my brother and I ever got.