THE SPIDER’S WEB: When one acclaimed writer followed another…

Welcome back! We’re at around Issue #167 in our epic, Amazing Spider-Man reread.

When we last left you, writer Gerry Conway was stepping off the title after a legendary run – ending at Issue #149 – and Len Wein was taking the reins. At this point, we’re around Issue #167.

I was talking about this creative change not long ago, on my pal John Siuntres’ excellent Word Balloon podcast — because I had recently been revisiting some Bronze Age Batman, and that reading went from Wein to Conway (with Marv Wolfman between them), and you really do see a lot of their strengths and weaknesses from both vantage points.

Like he did with Spidey, Conway tried his best to introduce new villains and elements to Gotham, arguably with less success. And Wein brought a humanity and street-level gravitas to the Dark Knight that, at least in the early issues, didn’t really click for me. Now, don’t get me wrong — Wein was a master, one of the best writers of his era. His knack for boiling things down, for connecting with the humanity in his characters, for pacing a book was unrivaled. But the whole gig felt pretty thankless, stepping in for Conway after such a historic run. How do you top the guy that killed Gwen Stacy?

Wein’s answer, which crystallized for me about six to 10 issues into his run, was to not try — to just tell solid, engaging and entertaining Spider-Man stories. It worked, and I’m in.

Like Conway, Wein was good at the long game — with a mysterious, shadowy figure pulling the strings of major events in his early issues, via the villainous Paine, by hiring the Sandman and so on. He also has an unnamed derelict wandering the streets of New York that clearly is of some import.

Unlike Conway (at least at the time), Wein’s stories feel grittier, more grounded, and — for lack of a better way of describing it — more Batman than Conway’s run. Wein also had a knack for Spidey one-liners, for sure — and I found myself cracking up as I revisited these. He also clearly loved writing JJJ, which is always nice to see. 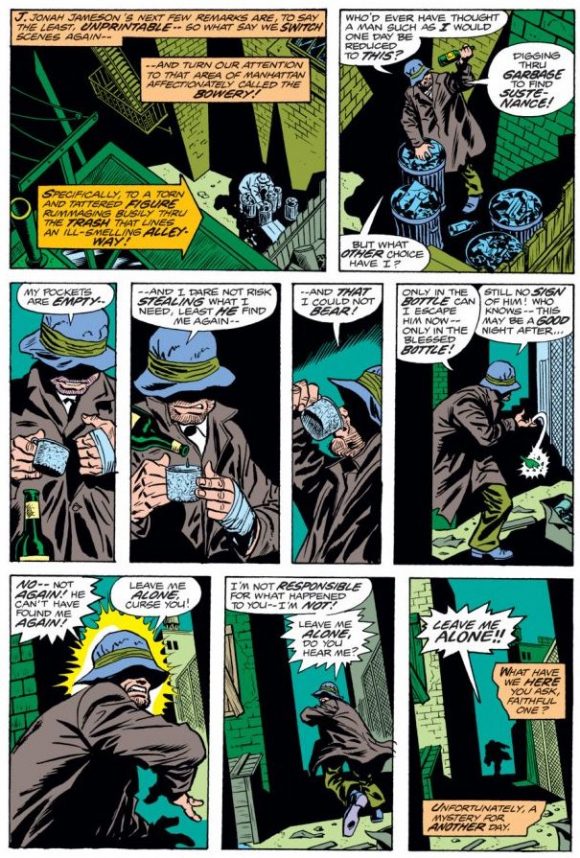 So, back to his run: Wein’s arc starts off with a solid Shocker two-parter (great, if grading on a curve for… the Shocker!), which also heralds the return of a “cured” Harry Osborn and the aforementioned vagrant. The main battle, though, feels ho-hum, but the issue is saved by Wein’s savvy use of Pete’s supporting cast, and his smart, human take on the MJ/Pete relationship.

Like Conway mined Stan’s run for hidden jewels, Wein is able to tug at some of the threads Conway left behind for maximum effect — with the big one being the new relationship Pete finds himself in. How will a party girl like MJ, who’s never really been in a serious thing like this before, respond to a boyfriend who has to jet every time danger arises? Wein explores it masterfully, and I sometimes found myself speeding through the battle sequences to get to the heart of the book — the people. In the Shocker story, it’s the JJJ-hosted Ned Leeds/Betty Brant engagement party.

After the Shocker, we’ve got a strong, if a bit melodramatic, one-off that features an ex-football-star-turned-scientist forced to turn over information on a computer — Worldwide Habitual Offenders, W.H.O! — to the bad guys. Spidey manages to intervene and save the scientist’s daughter, but the ex-baller dies. It’s a memorable story, and it feels literary and cinematic in a way we haven’t seen in this book before, but also a bit heavy-handed. Wein’s trying new things and I admire that, and I never got bored. Like Conway, Wein is great at not only picking out lost gems or stories from the past and reintroducing them — Hammerhead as a ghost, the return of the Tinkerer, the Spider-Mobile, Spider-Slayers, Jonas Harrow, Kingpin — but also at bringing new elements into the mythos, though some (Jigsaw, Leroy Tallon, Will o’ theWisp) work better than others (Stegron, Mirage, W.H.O.).

So, the verdict? Conway’s run was great, and after a half-dozen issues or so, it feels like the Wein era will be great as well, albeit with a bumpier start. It’s funny, because as noted, the Stegron arc felt a little clunky in terms of the big plot, even with a Lizard cameo, but it was the subplots that made it can’t-miss reading.

There’s an exchange between Peter and MJ that, for my money, cements their dynamic and relationship. It just felt honest and real in a way that you don’t see much in fiction. These are two, three-dimensional people trying to suss out their lives. Next-level stuff. — The long, slow-burn reveal of the Kingpin — back in Spidey’s orbit after a weird, Hydra-related Captain America appearance, works magnificently, and that, for my money, is when it feels like Wein’s run is really hitting top speeds. Though the whole “life transfer” stuff feels hokey, Wein makes it work and kicks off another Lizard throwdown right after, all while injecting the series with some major drama between Pete and MJ.

And hey, as a writer — this is the hard stuff. Dealing with human relationships. Not to diss what came before, but getting the characters to fall into bed together isn’t as hard as exploring how they make it work. Wein takes what was given to him and creates something new.

— It was neat to see Wein write another early Nightcrawler appearance after handing the regular X-Men gig to Chris Claremont. — Interesting to note how many key Punisher elements (war journal, Jigsaw) are introduced by Wein and Ross Andru.

— I have to say, of the run so far, the “Spider-Mobile comes to life” and “killer living computer” stories were the weakest. But still fun, because who doesn’t like seeing Spidey run from a living car?

— Marla Madison shows up! I completely blanked on her role as creator of the new Spider-Slayers.

— Mazel tov to Ned and Betty! — We meet Harry’s analyst, Bart Hamilton, briefly. We all know where this one goes!

— Tragic to see Harry find a bit of happiness with Liz Allan when we know how it all ends. But it amps up my curiosity about how the next Green Goblin story plays out — which should be coming soon.

— The Doc Ock/Hammerhead stuff felt like it happened too soon after Conway’s original tale, but that could also be because I’m binging these issues!

— Those photos JJJ has — uh oh! Again, another example of the long game we don’t see much of these days. Well done, Len. Speaking of, I enjoyed this appreciation of Len’s Spidey run, if you have more time to burn. — The Masterworks I’m reading included the Amazing annual (#10) that featured the debut of the Human Fly in a story by Wein that was scripted by Bill Mantlo with art by Gil Kane. A pretty solid skirmish, and it wove in with the regular, ongoing series surprisingly well. Always great to see Kane draw Spidey and Mantlo’s fun, bouncy dialogue worked well.

— Ross Andru continues to kick butt and really elevates his game on these issues, due in no small part to embellisher Mike Esposito, who brings out the best in the artist and is, in my humble opinion, the best pairing with RA. Andru’s stuff was already great, but now it’s just… perfect. — We’ve reached a fork in this re-read road: Peter Parker, the Spectacular Spider-Man is entering the picture. As some of you recall, I faced a tough choice when Marvel Team-Up launched — do I read both? Stick to Amazing? I landed somewhere in the middle — dabbling in MTU as needed, but keeping Amazing as my default. This feels a little different, though, as it’s a regular solo book — and written by Conway! My plan for now is to alternate Masterworks between the two titles and take it from there. Stay tuned!