If you miss your shop, German writer Haiko Hörnig has a tale that will warm you… 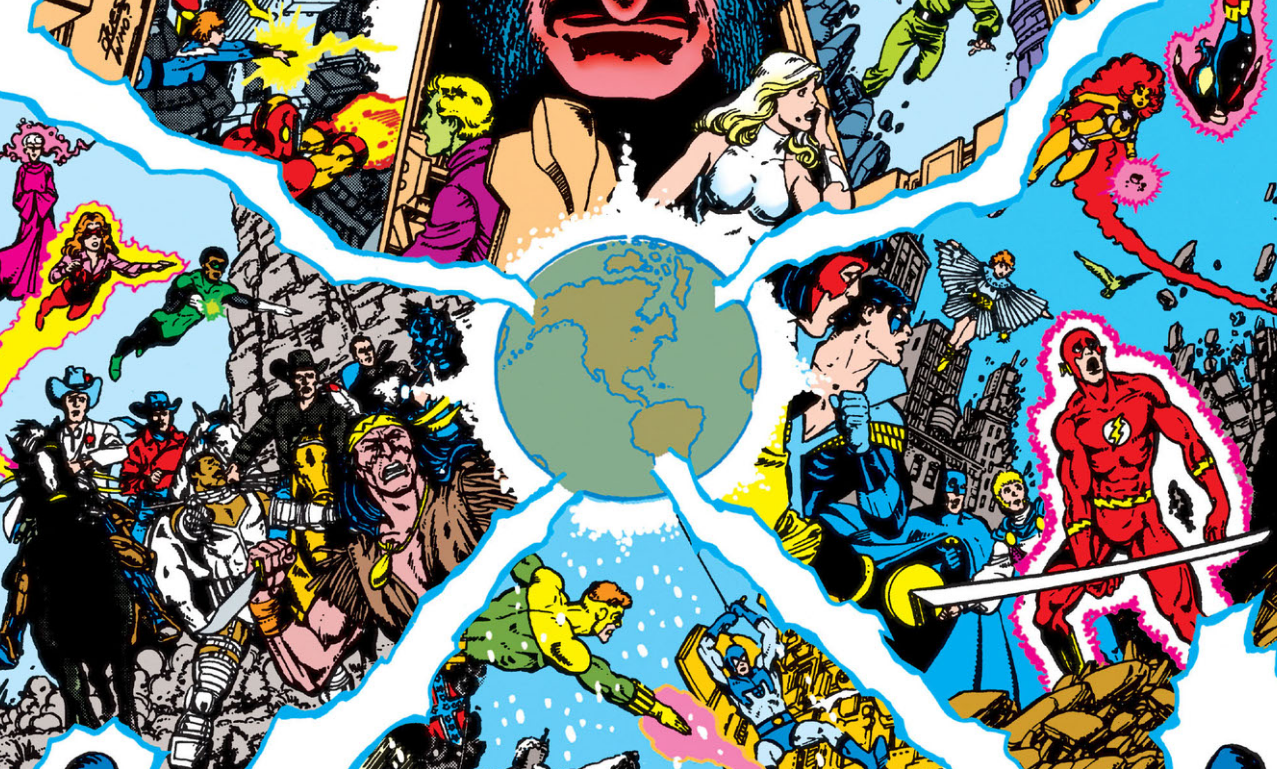 I told a friend just yesterday that one of the biggest things I miss right now in this virtual lockdown is going to my local comics shop, which is Midtown Comics on Manhattan’s East Side. So long as I remain hunkered down at 13th Dimension headquarters, I have to make do with mail-order and other crafty solutions.

Perfect timing, then, for this piece by German writer Haiko Hornig, who not only grew up in a comics shop but is the author of the upcoming graphic novel A House Divided: The Accursed Inheritance of Henrietta Achilles, the first volume of 4-part series created by Hörnig and lifelong pal Marius Pawlitza and published by Lerner Publishing Group. The story features pirates, bandits, tiny monsters, a sentient house, and, above all, an orphan heroine. (Click here for more info.) 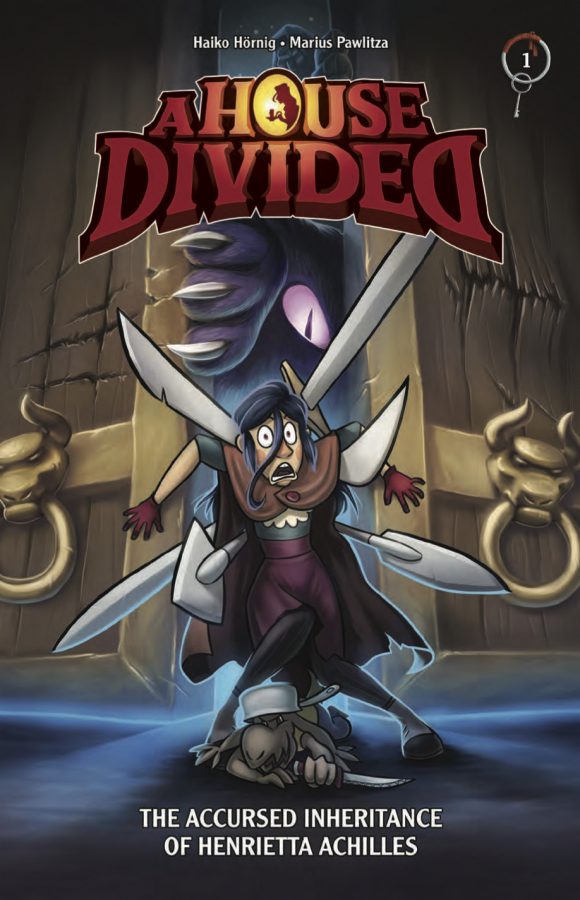 Hornig speaks for so many of us about the powerful lure of the comics shop — and his perspective is particularly uncommon and enviable. I mean, how many of us fantasized about growing up at a comics store when we were kids — especially when it meant meeting the likes of George Perez?

So dig this piece. It’ll hit you in that sweet spot — Dan:

In the mid-’90s, I was living every nerdy kid’s dream. My parents owned their own comic book shop, and I got to treat it as my personal library. Growing up, I took it for granted, of course. It would take a few years for me to realize just how lucky I was. 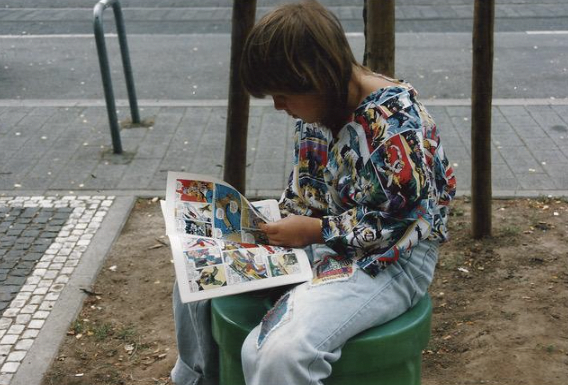 9-year-old me, wearing a very ’90s Tarzan shirt and reading Spider-Man. I’m sitting on something that might look like a green warp pipe from Super Mario but was, in fact, a trashcan.

Back then, you would find me more often than not at Comicothek (that was our shop’s name), sitting on the stairs leading to the second floor, where rows of current issues of US comics were showcased and back-issues were safely stored in long boxes. Comicothek’s first floor was usually reserved for Franco-Belgian Bandes dessinées like Asterix, Tintin, Lucky Luke and The Smurfs, as well as the collected works of Carl Barks and Don Rosa. 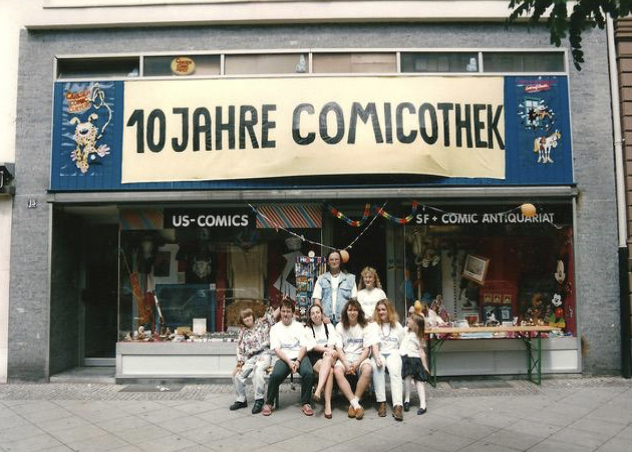 In 1993, Comicothek celebrated its 10th anniversary. In the back row, you can see my parents.

But I didn’t care much for distinctions of genre. I read them all, sitting right there on the stairs. Without reservation and, most of the time, without supervision. While my parents were quick to censor the kinds of movies and TV shows my sister and I watched, they were more liberal when it came to comic books. And so I was maybe a bit too young when I started browsing through Judge Dredd, old Mad issues, Watchmen, The Dark Knight Returns, and Garfield: His 9 Lives. The latter one left me the most scarred. (Seriously, there’s some dark, twisted stuff in this weird Garfield book!)

Problem was, I could hardly brag about this in front of my friends. Most of them weren’t interested in comics beyond the occasional Lustiges Taschenbuch (Disney comics that were produced in Italy and are still very popular in Germany). And none of them had ever read Teen Titans, Hellboy, or even the Death of Superman. How could they? They didn’t have the access, and pocket money was tight.

But the biggest perk of growing up in a comic book store was meeting the artists. From time to time, comic creators did signing tours through Germany, and sometimes they would visit Mannheim’s Comicothek.

Among various German and French artists, we also had guests like legendary US stars George Pérez. In retrospect, meeting Pérez was maybe one of the most important moments of my life. Sure, I had read Crisis on Infinite Earths, but actually seeing the man who drew it blew my mind. And it made comics suddenly very “real.” Like, there were actual people who made these things that had always been around? This realization left a lasting impact. 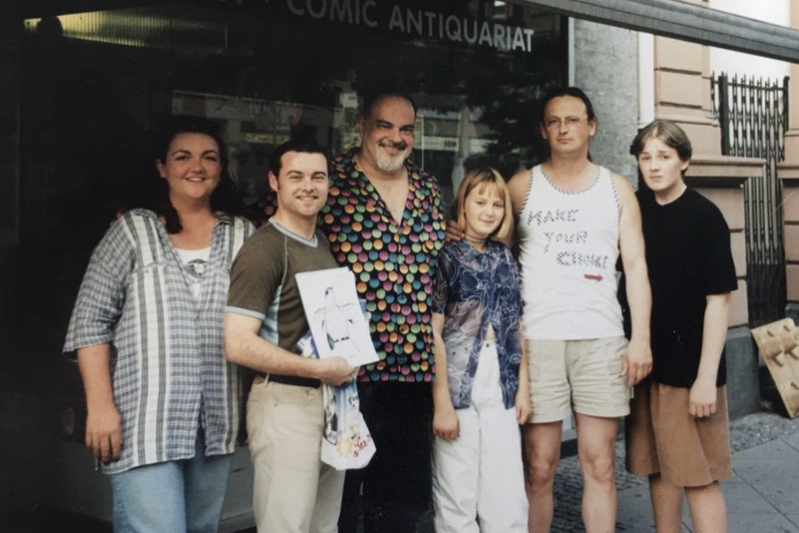 In 1999, George Pérez did a book signing at our store. I’m the pasty 15-year-old on the far right, next to my dad. I have no idea why I look so miserable. Must have been the teenage-angst. Or the shorts.

In 1998, Dragonball arrived in Germany and I became not only a huge Manga fan but also the unofficial comics dealer at my school. Suddenly, everybody wanted to — nay, needed to! — read comics. And they came to me. For the remainder of the year and the year after that, I left most of my school books at home and stuffed my backpack with as many issues of Dragonball as I could carry. And the best of it all? For the first time, talk about comics dominated the schools halls.

Fast-forward a few more years. School ended, I left home for university and moved to another city. Without constant access to new comics, my interests slowly shifted to making short films and playing video games. I was unplugged from comics culture, and for the first time in my life, I didn’t mind.

Back home, Comicothek wasn’t doing so well anymore. While other comic book stores had pivoted early to trading cards and merch as their main source of income, my dad had resisted the trends and tried to stick with comic books. It was the thing he knew most about. 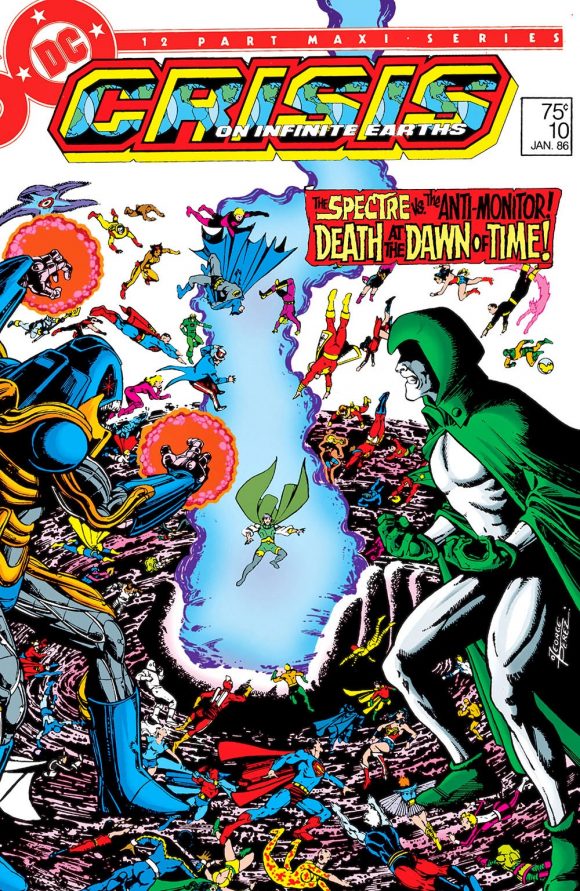 In 2008, my dad suffered a heart attack. It was a wake-up call. In the following year he sold the comic book shop. Over the years Comicothek had turned from a passion to a burden, and the constant stress and worry were threatening his health. After owning a comic book store for 30 years, he quit the business. Thankfully, he never truly quit comics. To this day, he remains a passionate collector. Recently he even started publishing a small run of reprints of old western, sci-fi, and horror stories from the ’40s and ’50s.

In the meantime, I had found my way back to comics too. It started with discovering webcomics. One thing led to another—and now it’s 2020, and I’m publishing my first graphic novel with a US publisher.

Comicothek is long gone. The new owner managed to keep the lights on for a few more years, but ultimately he closed the shop for good and moved out of the building. Thinking back to all the afternoons I spent sitting on those stairs to the second floor, reading comics, I can’t help but get misty eyed. The place that shaped so much of my youth is no more. And I can never sit where George Pérez once sat and sign my own comics. Still, looking back, it’s obvious to see the positive impact growing up in a comic book store had on me.

Today, I work as a professional writer in comics and animation. I get to make a series of fantasy graphic novels with one of my oldest friends. (And yes, he was one of the kids I sold Dragonball to). In a way, I’m still living the dream.

And I’m not taking it for granted anymore.

Haiko Hörnig is a writer of screenplays and graphic novels. He lives in Frankfurt, Germany, where he writes for various clients and works with his friend Marius Pawlitza on their fantasy series A House Divided. The first book, The Accursed Inheritance of Henrietta Achilles is available wherever books are sold April 7. (Click here to pre-order.)