How Fans Reacted WHEN ROBIN LEFT FOR COLLEGE

Readers from 1969 — including Mike W. Barr and Alan Brennert — respond to a landmark event…

“Wake up, Maggie, I think I got something to say to you
“It’s late September and I really should be back at school…” — Rod Stewart, 1971

Actually, it’s late August and most college kids are already at school, about to be, or planning a semester online. Routine but exciting rite of passage, y’know?

In any event, this time of year always gets me to thinking about the most groundbreaking college enrollment in comics history — when in the fall of 1969 Dick Grayson left the confines of Wayne Manor, after almost 30 real-time years, for Hudson University. 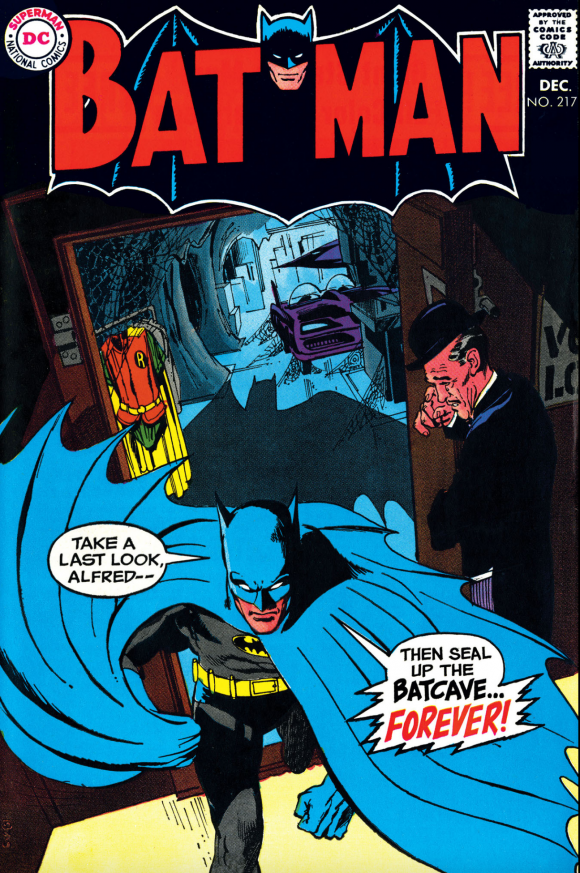 DC had been teasing something they called the “Big Change” for Batman in the months leading up to the move, as the publisher worked hard to escape the camp hangover of the cancelled Adam West TV show in 1968 and bring the Caped Crusader back to his darker, Golden Age roots. (I’ll be writing much more about this fascinating, yet underrated, period in Bat-history in the weeks to come.)

For some time before the landmark Batman #217 hit in October, DC had been not-so-subtly finding reasons to keep Batman and Robin apart. The tone of the stories began to shift as writers like Frank Robbins and Mike Friedrich banged away at their typewriters, producing increasingly serious fare. Fans had fallen in love with Neal Adams’ covers for Batman and Detective, and his interior art in The Brave and the Bold proved so popular that pencillers like Irv Novick and Bob Brown adopted similar sensibilities. (A big boost came as well when Dick Giordano started inking the books.) 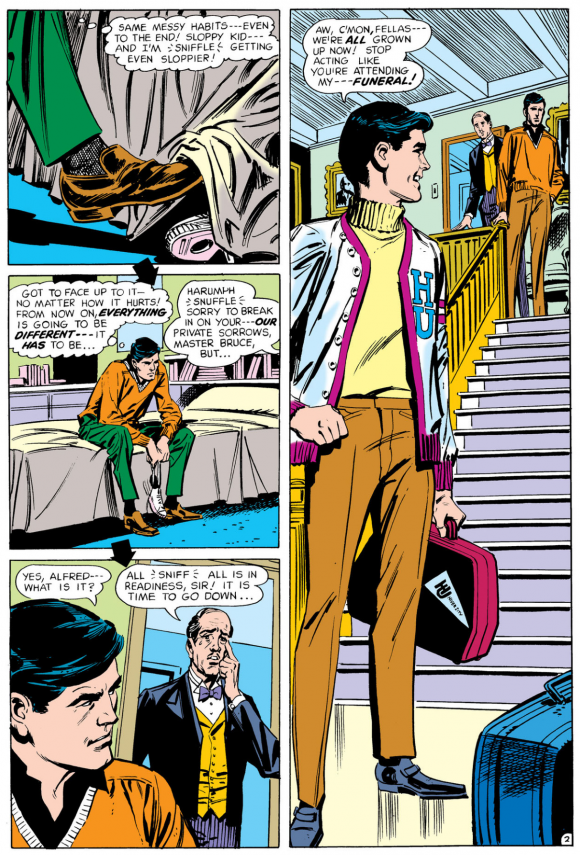 Anyway, in retrospect, the primary Batbooks were being used as a “backdoor pilot” to see how fans would take to the idea of the Dynamic Duo dissolving their partnership. (Except on holidays and during vacations, it would generally turn out.)

So how did the fans react? Well, check out the letters columns from Batman #221 and Detective #398 — including missives from future Bat-writers Alan Brennert and Mike W. Barr. They provide a wonderful, thoughtful snapshot of one of the biggest moments in comics lore: 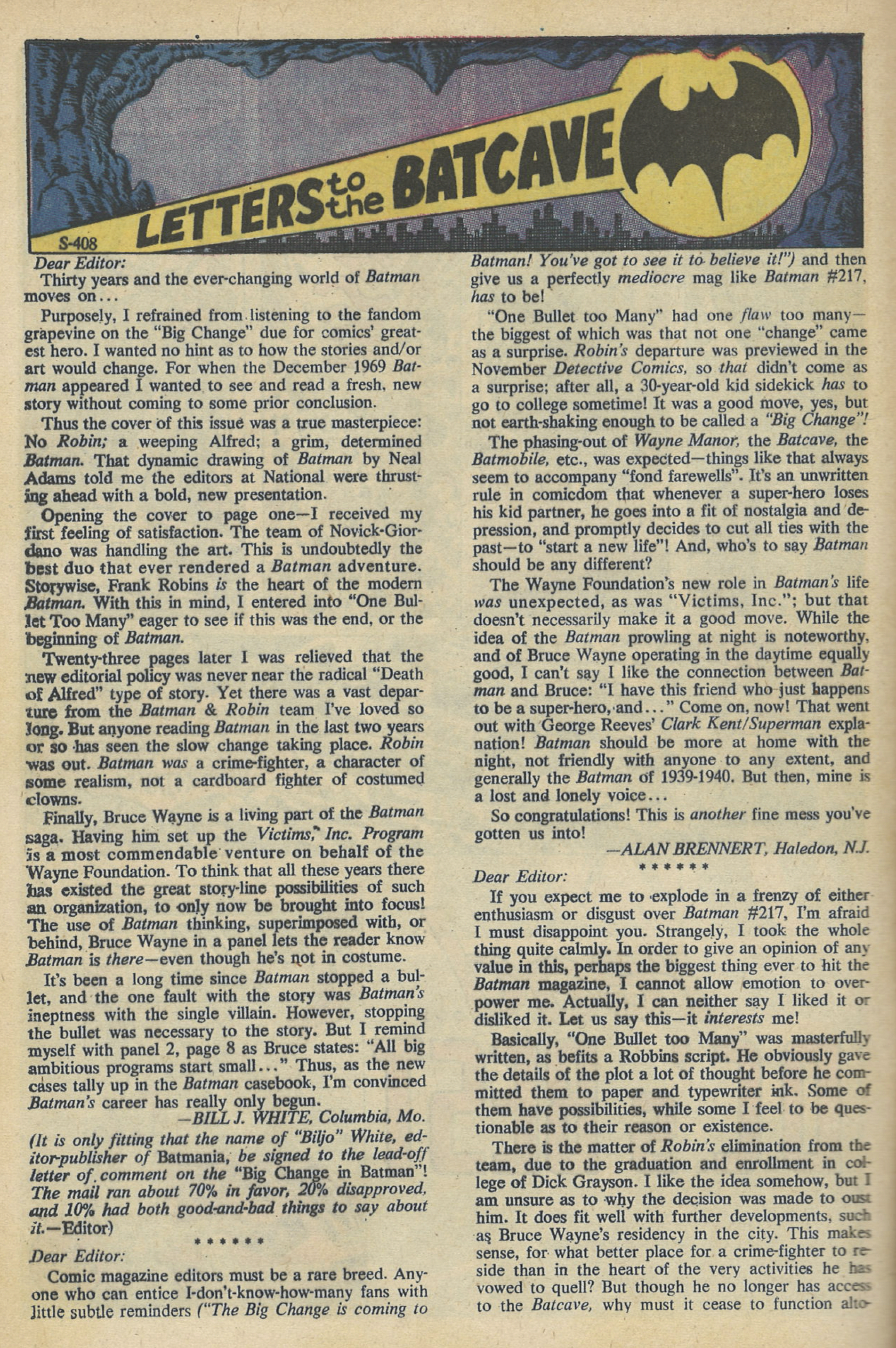 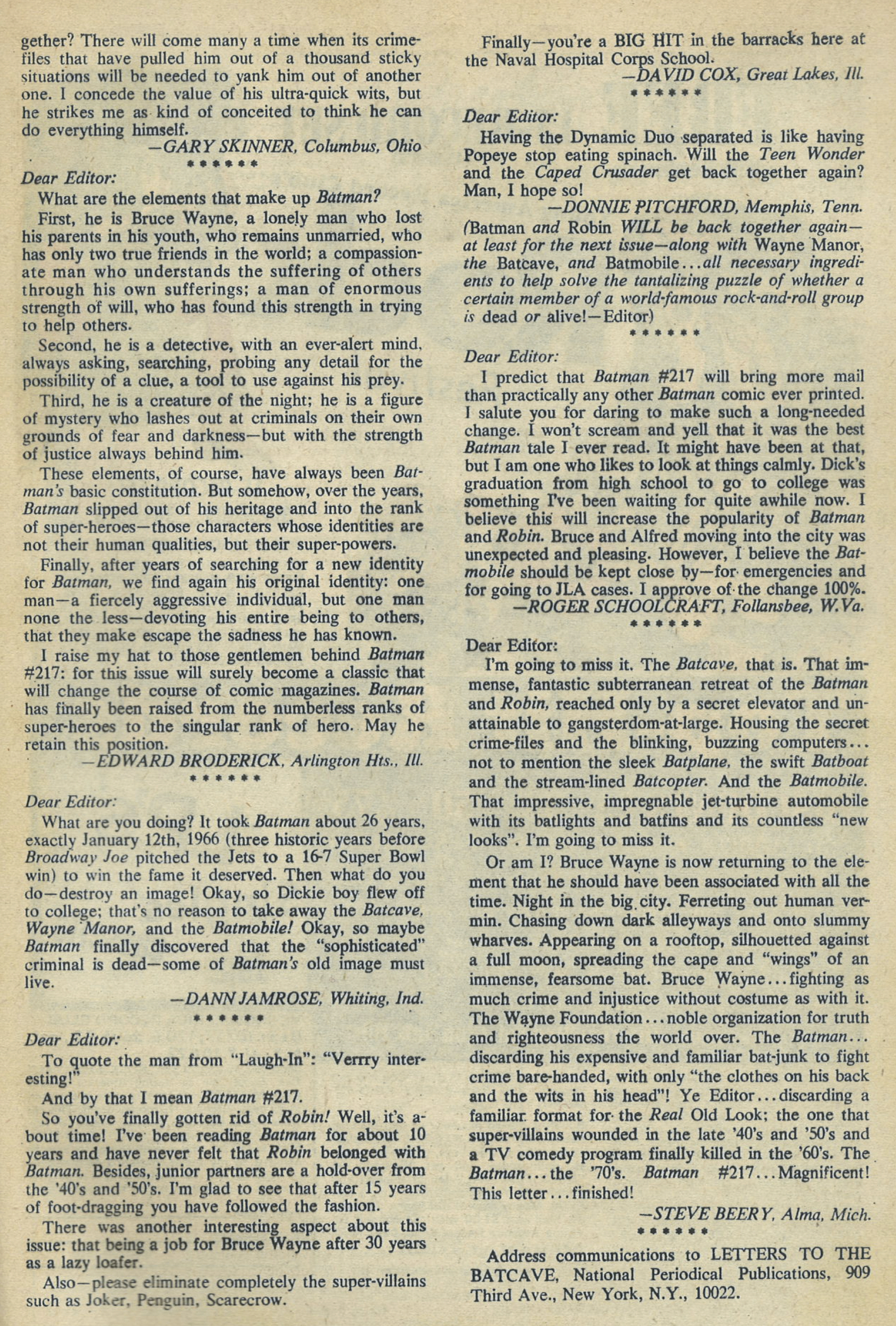 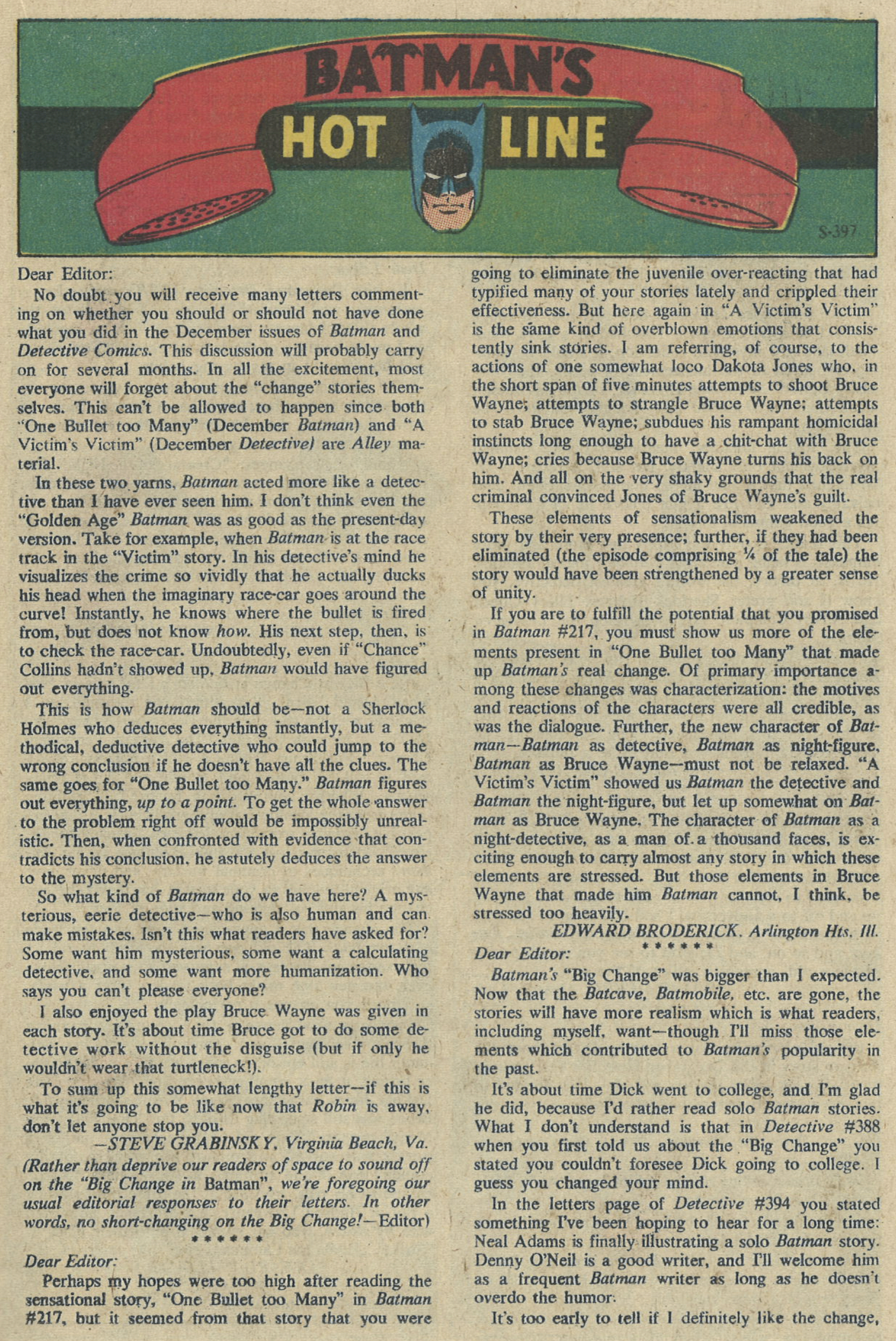 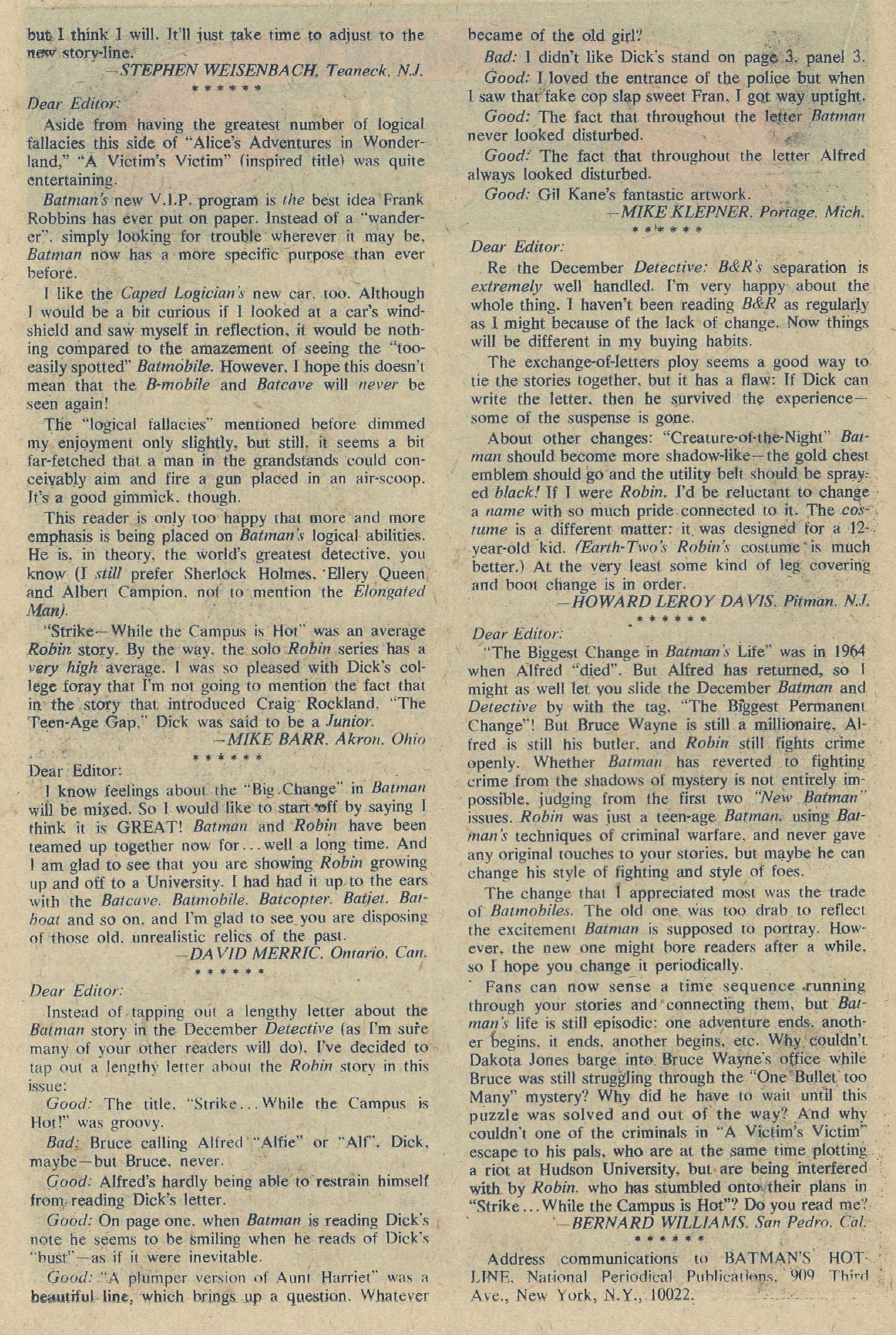 Man, I really miss letters columns — and ones like these really let you see historic events from the ground level.

They’re just a bit more enlightening than hot-take rage tweets, am I right?

— How Fans Reacted to THE DEATH OF ALFRED — The First Time Around. Click here.