So much to choose from, the crew can barely contain themselves!

Silver Surfer #1, Marvel. I know a lot of people will be choosing this book, but it’s one I have been looking forward to since it was announced. Not only is it by Dan Slott, who I like not only because of his Spider-Man run but also because he has the good taste to be a huge Doctor Who fan, but it has art by Mike Allred. Did you read that? Art by Mike Allred. So add it to you pull list now! Silver Surfer has been one of my favorite characters for a long time so I’m really interested to see what this new creative team brings to the table. And did I mention the art is by Mike Allred? 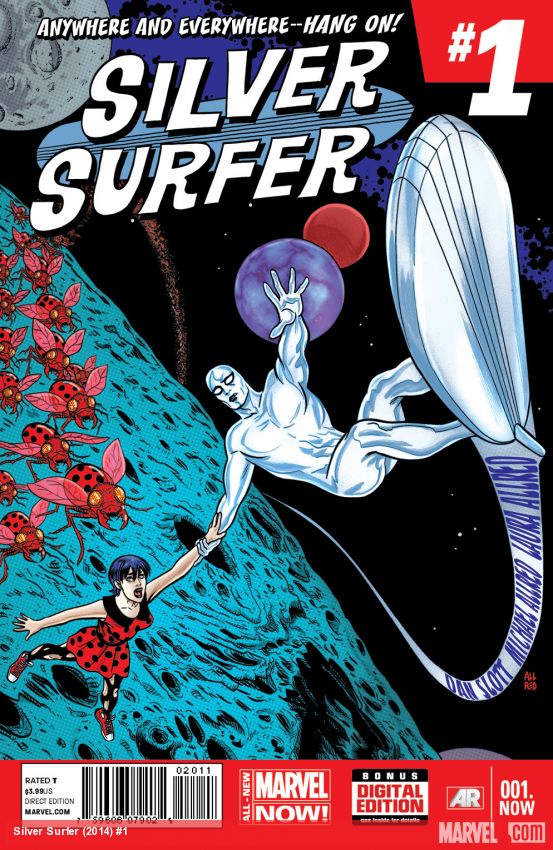 Alex & Ada #5, Image Comics. For those who are reading Alex & Ada, you know why I am so anxious for this issue. Talk about a cliffhanger! This is one of those books that is so subtle and so good, the brilliance just sneaks up on you and it keeps you thinking about it. The art is simply beautiful. And the story, while I’m afraid it will leave me sad in the end, is so intriguing and has me invested in the characters. I still want another appearance by Grandma, though.

“Rat Queens Vol. 1,” trade paperback, Image Comics. I have been totally taken by Hannah, Violet, Betty and Dee. Who? The Rat Queens, of course. It’s like Dungeons and Dragons with sassy women! I instantly fell for them! This trade collects the first five issues and I think it will be even more fun to read all at once than monthly (I still pick up the floppies, too)! Read this and you soon will love them. Everyone has their own favorite. Betty is mine, which isn’t a surprise to anyone who knows me! Do yourself a favor and check this series out!

Silver Surfer #1, Marvel. Dan Slott.  Mike Allred. Need I say more?  You’ve got the guy who killed off Peter Parker writing and the guy who is a psychedelic Jack Kirby handling the art. This book is going to be a f@(%ing MONSTER. I recently spoke to Dan about it and he said he was afraid that it was going to be too hyped, that no one would like it and he and Mike would wind up living in a cardboard box, writing and drawing the comic on the walls in chalk, just for themselves. I replied that if they’re doing the book for themselves, that it’s something they want to see, then it can’t fail. Remember kids, when you love comics, and you love characters, it always comes through. Especially when it’s coming from two masters of the craft.

So much to choose from this week!  There is the second issue of both Sandman Overture from Vertigo and Elfquest: Final Quest from Dark Horse. Along with the first issues of both the All-New Ghost Rider and The Silver Surfer, we get Superior Spider-Man #30 (an issue that I expect to be as big as the first appearance of Doc Ock Spidey) from Marvel. Even IDW comics gives us great comics like Star Slammers Remastered #1 and the fifth issue of Wraith. My pull list this Wednesday night is going to be as big as my wallet was on Wednesday morning…  If I had to pick what I’m looking forward to the most, though, that honor would go to Vandroid #2!

Vandroid #2, Dark Horse. I picked up the first issue just on the concept alone. It’s based off a script of a movie from the 1980s that never happened because the production offices were lost in a fire. If you believe that actually happened, that makes the story more fun. The story is a B-movie plot that steals from “The Terminator” and other movies from the time.  It’s about a man who makes an artificial intelligence that is so smart that they barely get it shut down in time. It’s taken to a washed up van detailer who then builds a robot chassis for the intelligence. When it’s activated the A.I. then assumes the identity of the van detailer. That’s because the A.I. downloads his personal diary from his computer.  Written by Tommy Lee Edwards with art that fits the story perfectly by Dan McDaid, I hope the series finally gets made into an actual movie. (For a trailer for the “lost” film, visit Vandroid.com) 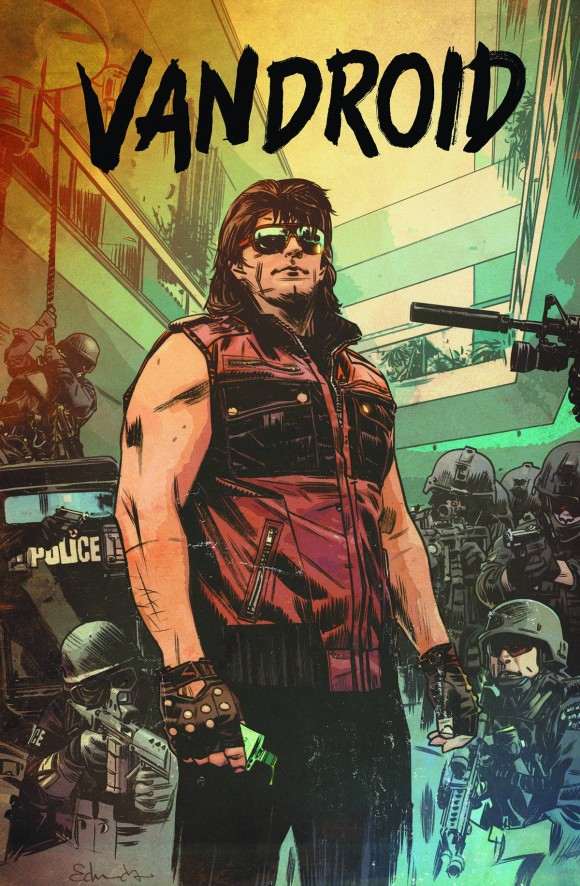 Yet another amazing week of comics. I could EASILY pick five books and feel like I was missing awesome stuff, so I’m just going to go with my standard three and hope everyone else here can pick up my slack on all the awesome stuff I miss.

Crossed #50, Avatar. Garth Ennis returns to Crossed. That’s really all I should need to say, honestly. Ennis created this world — this messed up, horrific, disgusting, boundary-pushing world — and now he’s back to tell us how it got that way. What caused the zombie infestation? We’re finally about to find out.

Empowered Special #6: Internal Medicine, Dark Horse. Adam Warren’s awesomely subversive and hilarious superheroine is back with yet another one-shot special, this time drawn by the amazing Brandon Graham. In this story, Ninjette and Empowered have to help save a parasite-infested babyship. What’s a babyship, you ask? The child of a MOTHERSHIP, duh!

“Rat Queens Vol. 1,” trade paperback, Image. One of my favorite books of the last few months is finally out in trade! The title of this volume really says is all: Sass and Sorcery. Taking place in a D&D or World of Warcraft-type world, our main characters are an all-female raiding party who like to get drunk and kill things. But someone in their town has it out for ALL the raiding parties and as their friends and enemies start dying, the Rat Queens ain’t having ANY of that. A laugh-out loud read with pitch perfect writing by Kurtis J. Wiebe and fantastic art by Roc Upchurch, the collection is only $9.99 and features a cover by the legendary Fiona Staples! 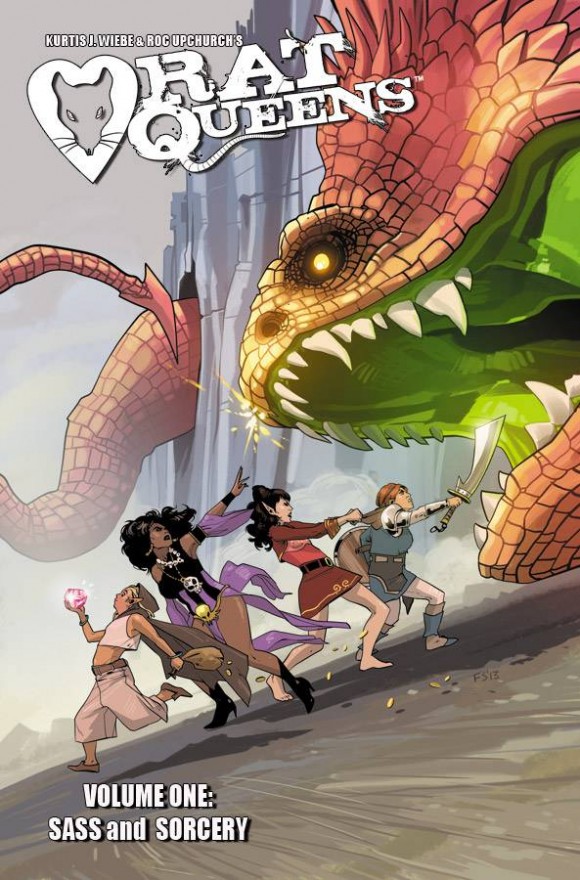 Silver Surfer #1, Marvel Comics. Getting it is the order of the day. I don’t mean going out and buying the comic (though that’s good, too). I mean understanding it. The problem with Silver Surfer and the reason he’s gone through six iterations — most of them not lasting too long — is that the fans don’t get it. I’ve seen it so many times, where fans get really hyped over a Silver Surfer #1; prodigal children of comic collecting come back to the fold to pick it up and swear they’ll be back for good, then disappear again. They don’t maintain the sales and it tanks. I don’t know what they’re expecting when they pick it up; he’s a nigh-omnipotent being. Sure he can fight Thanos or Galactus or Mephisto again, but in order to make these adventures affecting, he has to spend time wandering space, musing over some of its beauties and pitying some of its shortcomings. We got a sample of the story Slott and Allred will tell in Marvel Now Point One, and something tells me they get it. Hopefully, fans will come in and understand that with that creative team, the stories will be a little offbeat.