Your humble editor, 1973. Not Halloween but it doesn’t matter because I pretty much wore this every day.

I wanted to do something a little different for Halloween this year — share snapshots of 13th Dimension contributors and readers in their childhood, trick-or-treat finery.

We put out the call and you responded, so here are a number of my fave submissions (more than 13!). Not every one was taken on Halloween but they certainly fit the holiday spirit.

Oh, and thanks to Jason Young — and his book An Old School Halloween, which is headed for a second printing — for the idea! Anthony Desiato, podcaster and regular 13th Dimension contributor: “Circa 1992—age 5—on the balcony of the first place I lived, an apartment in Hartsdale, N.Y. Best part is that, 30 years later, I have a near-identical shot of my son in the same pose.” 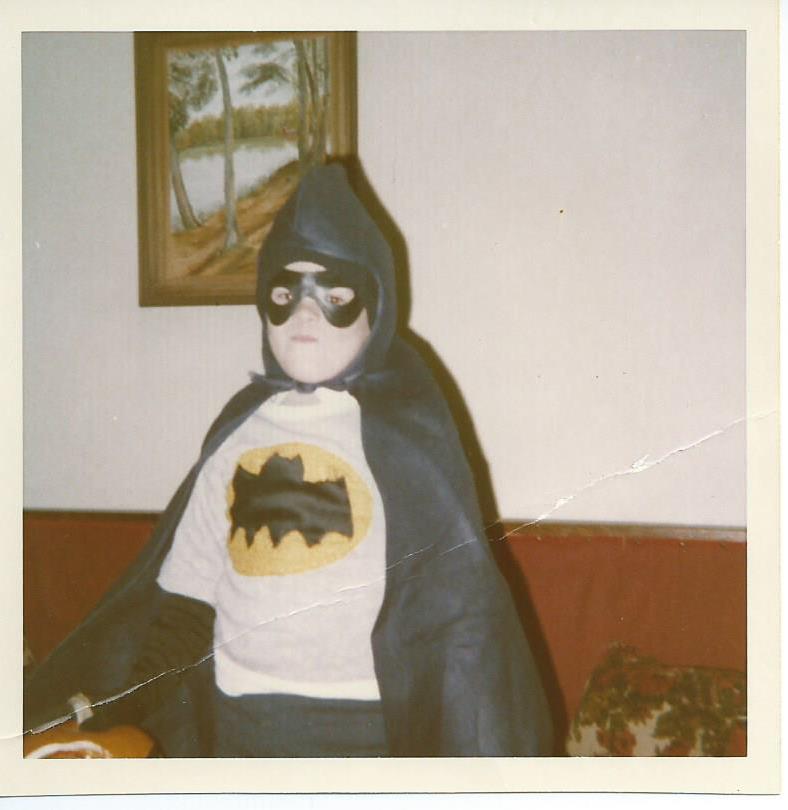 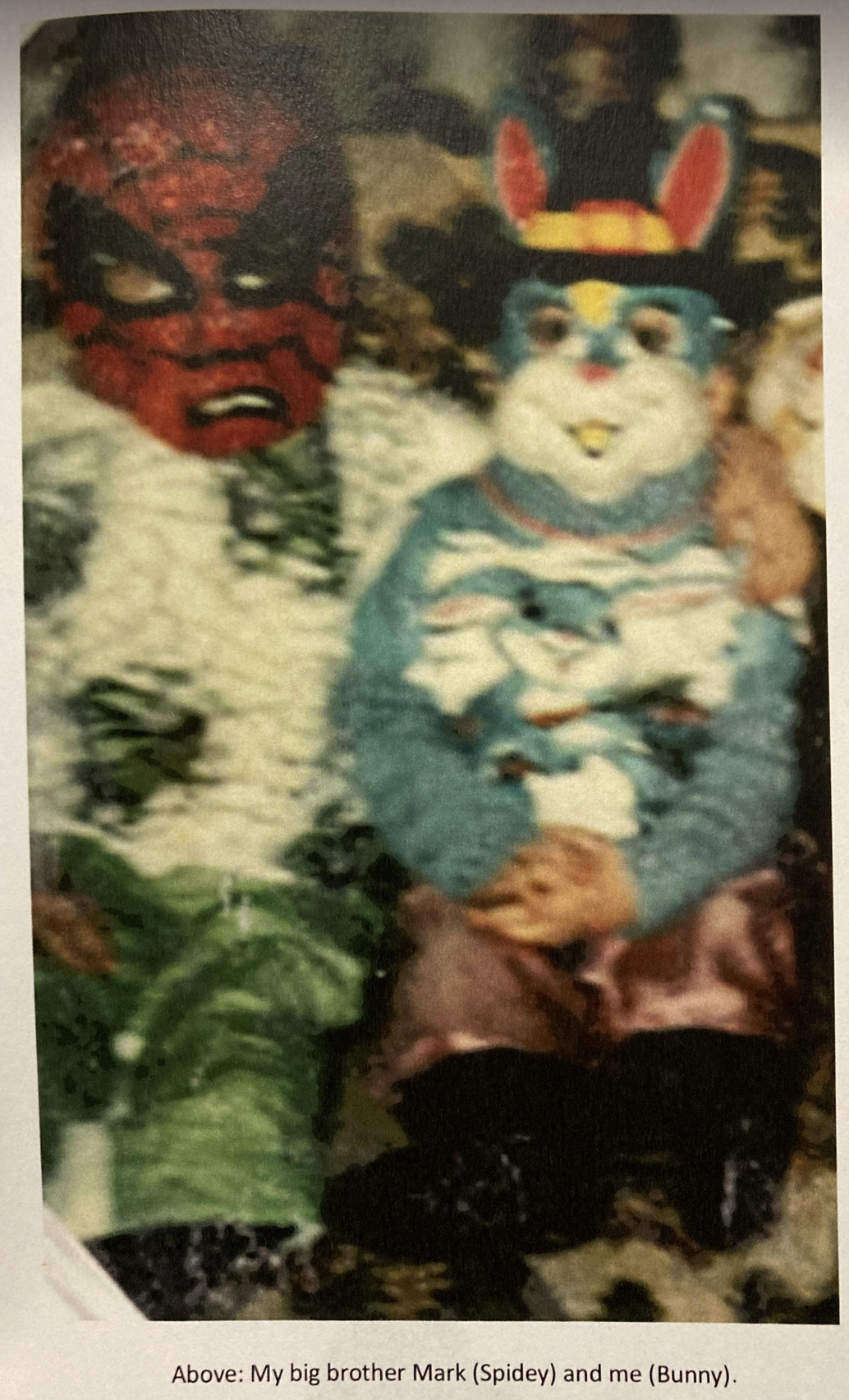 Historian Jason Young (An Old School Halloween): “Sadly my only childhood Halloween pic. Me as the little bunny (age 4) with my brother Mark (age 7). In Halifax, NS, Canada. I wasn’t happy about wearing a girl bunny outfit that year.” 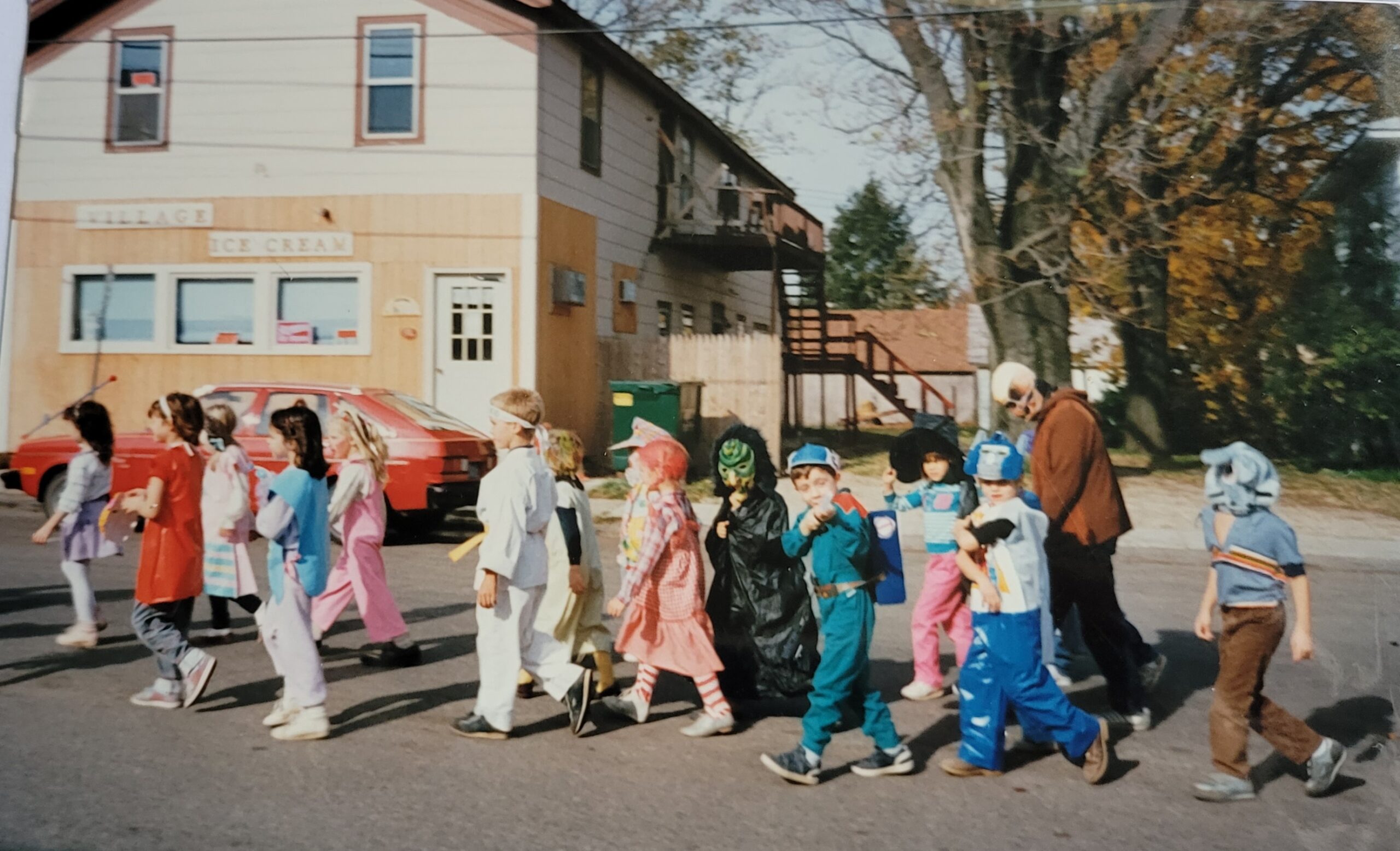 Reader Jason Peden: “Halloween 1986. I was 6 and in first grade. My class was participating in the annual Brandon Elementary Halloween parade in the tiny town of Martin in west Michigan. I’m the kid in the green jumpsuit which was part of my homemade Ghostbusters costume!” 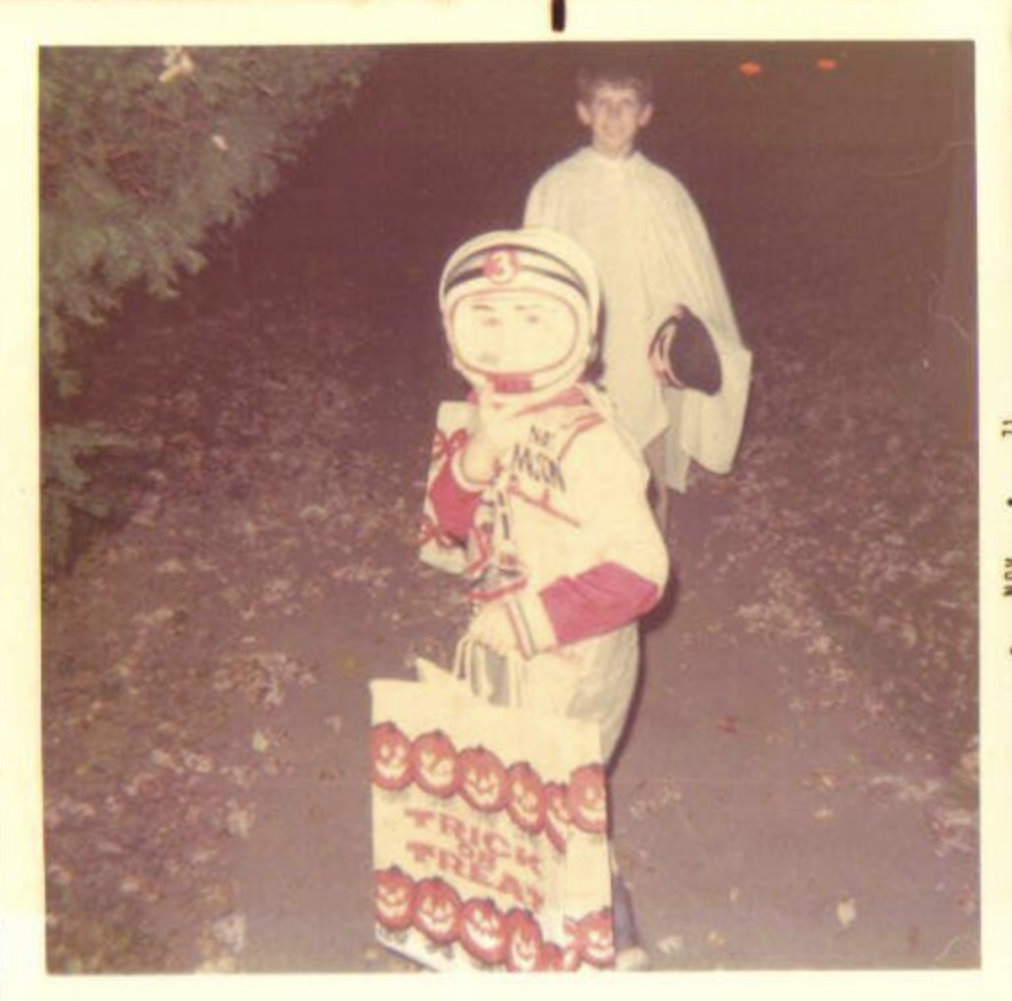 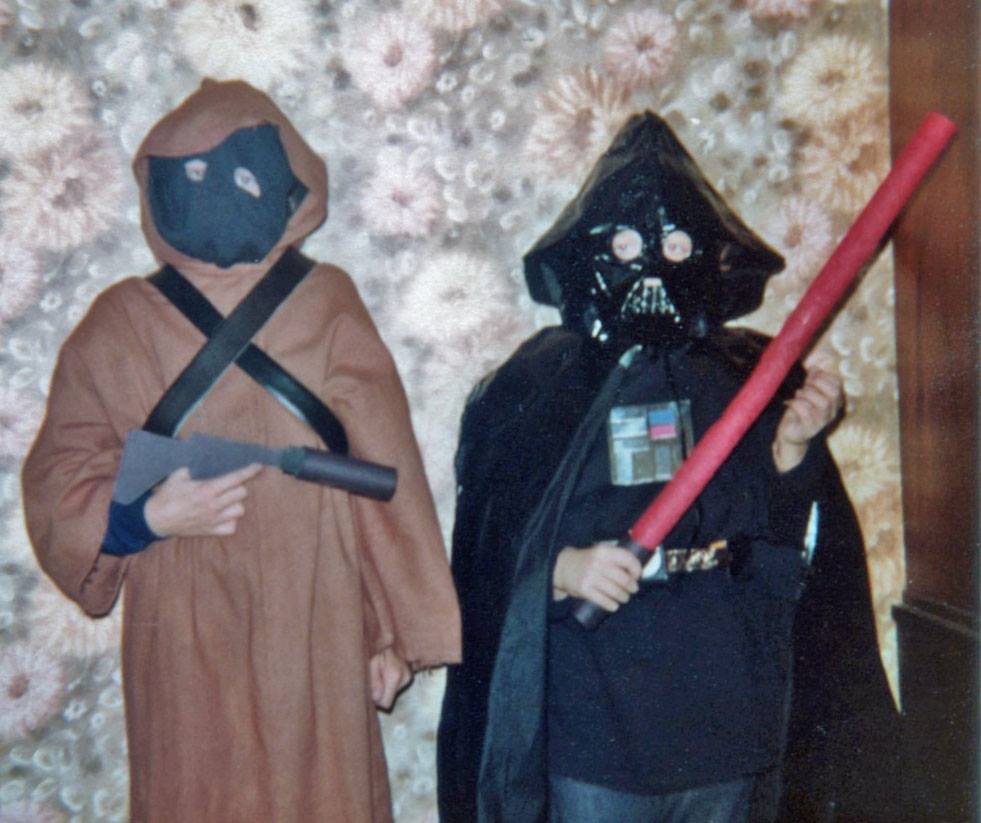 Scott Tipton, 13th Dimension contributor-at-large: “1978. I’m the shorter Dark Lord of the Sith on the right. Note that my brother is carrying a very Kenner-inspired Jawa blaster.” 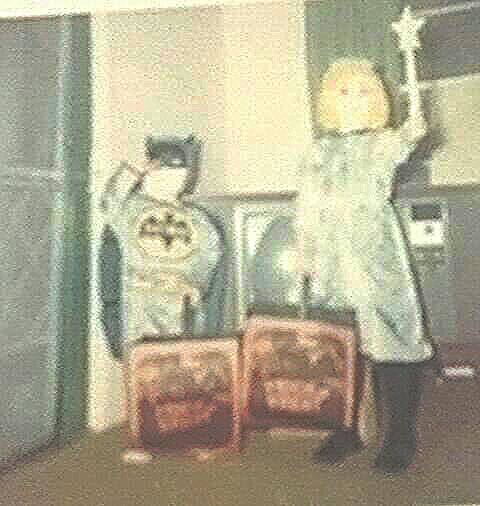 Reader Michael Sullivan: “Me and my older sister. I was 5 years old and this was taken in Manhattan Beach, Calif. It was 1969.” 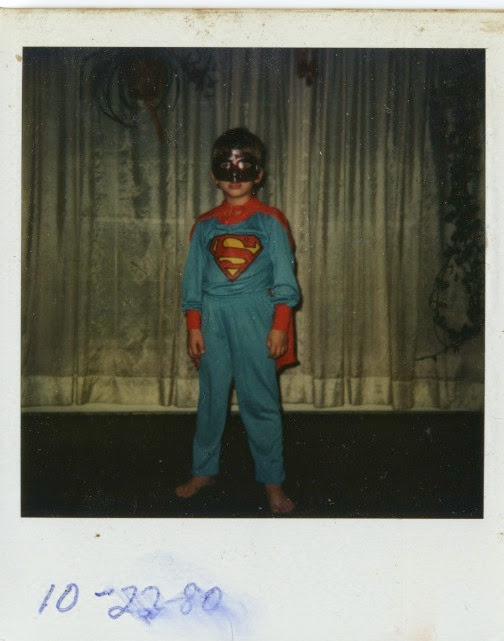 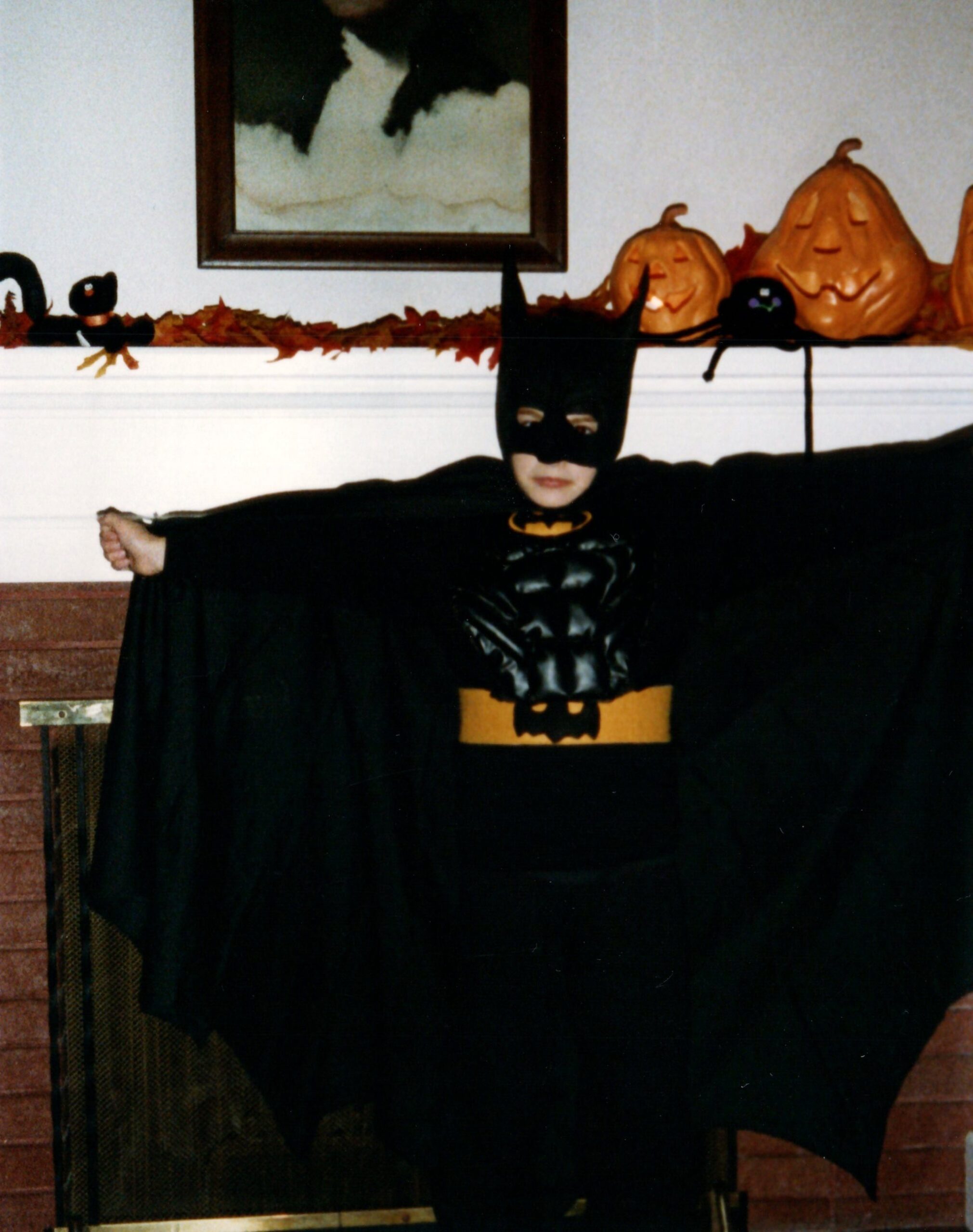 Travis Meidell, Batman animation expert: “My Batman Returns Halloween costume from 1992, Salt Lake City. My mom made 90% of the costume, including the cape with strings to help spread the cape out and the “rubber-y” six pack and logo for the chest. Finally it was all pulled together with a cloth and velcro utility belt. The mask was the only official thing and was definitely made for adults, but my mom stitched the rubber under the chin up tightly so it fit. I still have the entire costume, including the rubber mask that is basically falling apart.” 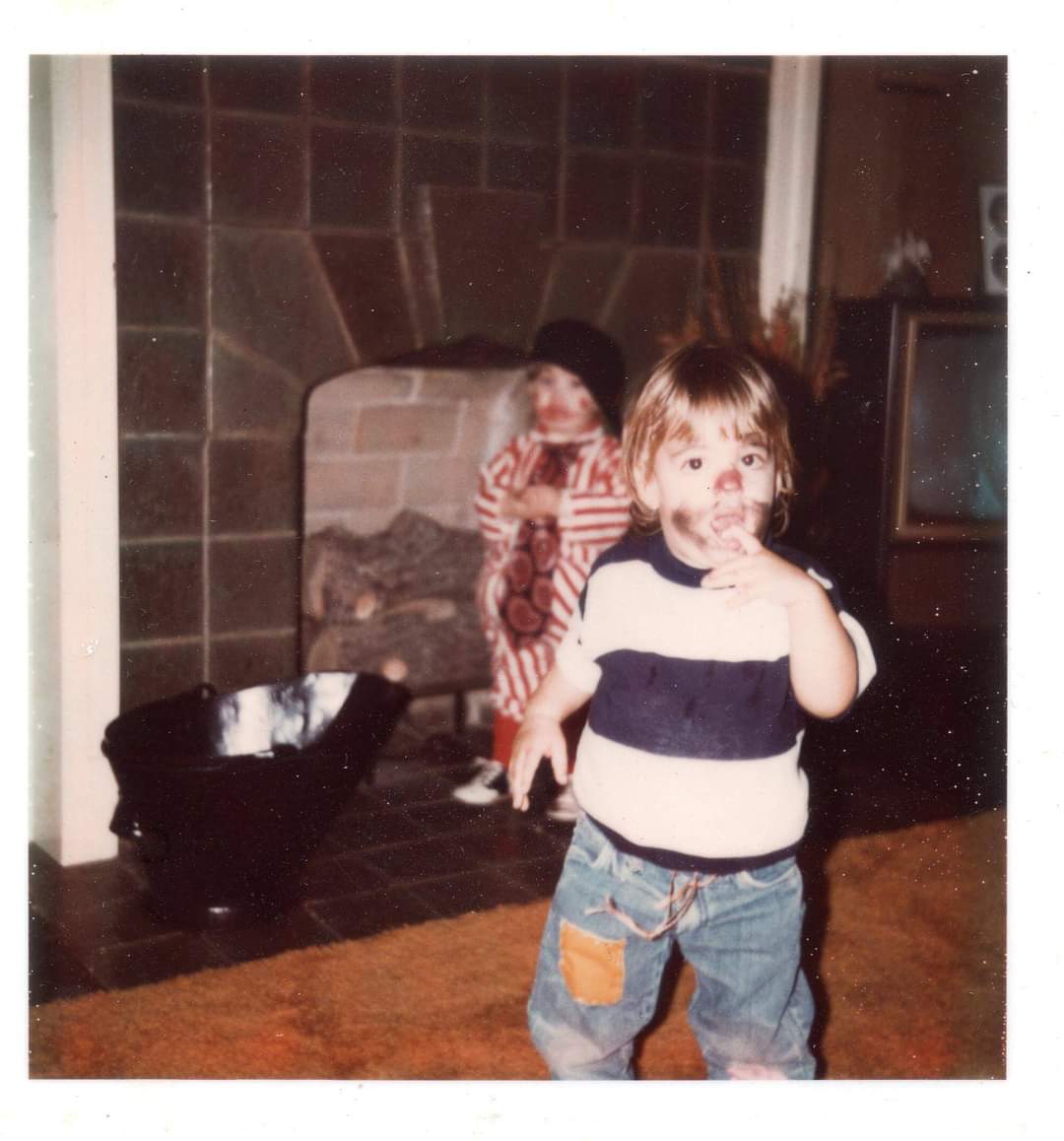 Reader Charles Thornton III: “I was 5, 1978, San Diego. “My father was a big fan of clowns. My sister (in the background) and I were clowns for several Halloweens. I remember for many years I was Emmett Kelly. I’m still a fan of clowns to this day thanks to these memories.” 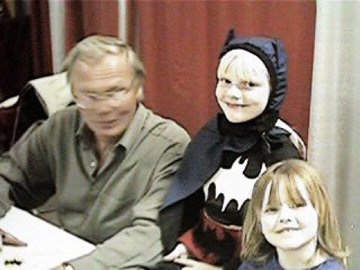 Reader Michael Buchholtz: “My daughter Sarah as Batgirl. Gotta be about 20 years ago at the fall Detroit MegaCon (held in November). That blurry face in the picture with her is Adam West.” 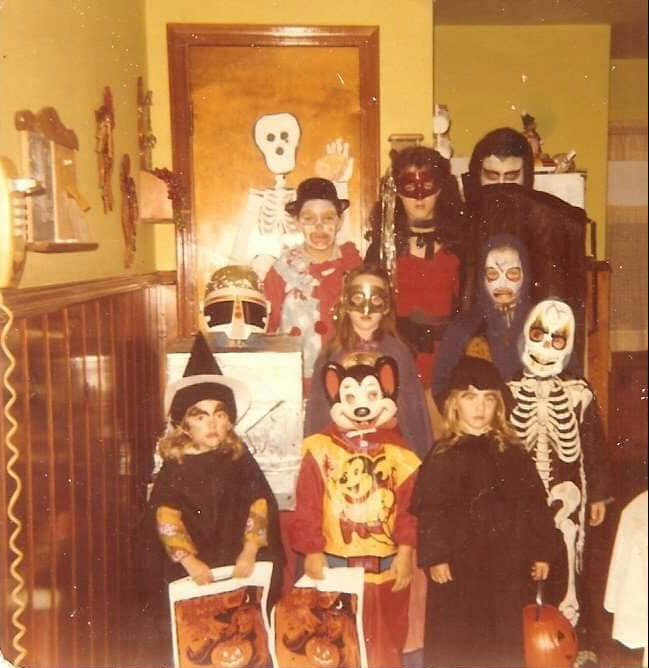 Reader Jim Leonard: “Here I am at 15 (I’m the vampire), with my sister, Jaene, next to me (she’s dressed as her take on Electra Woman), along with our nieces and nephews, ready for Halloween at my older sister Sharon’s house. It was 1976, and this was the perfect suburban neighborhood for trick or treating! We live in St. Louis.” Reader Chuck Dill: “October of 1978. We had just moved to Rochester, N.H., and I had just turned 9 years old. The Air Force kept us moving a lot, and I had zero friends other than the comics and Mego figures I held dear to my heart. This is no Ben Cooper Superman costume. My mother sewed this by hand. She was a real “June Cleaver” type. I knew immediately, but never mentioned the lack of super-shorts. Or the fact that there was no yellow “S” shield on the back of the cape. This was sprung on me as a surprise and I was dutifully grateful. Even though I would’ve preferred Aquaman. The haircut, by the way, is courtesy of the Air Force barbershop and NOT my idea.” Artist and Batman expert Matthew Dunn: “1985, Tennessee. My brother, 22 months old, as Robin to my Batman. This was taken a few months before Halloween, but we’re wearing the costumes we wore that year, a combination of Underoos, my Dad’s Ideal Batman costume set, and pieces sewn by my mom and grandmother.”