GOTHAM TRIBUNE: Hot Toys, Where Have You Been All My Life? (UPDATED)

Home » ACTION FIGURES & MERCH » GOTHAM TRIBUNE: Hot Toys, Where Have You Been All My Life? (UPDATED)

I’ll just go ahead and say it: 1966 Batman and Robin from Hot Toys are the greatest action figures I have ever seen.
Anyone reading this is almost certain to have already seen the pictures, but to see these figures up close is something else entirely. I swear some nefarious evil-doer broke out the shrink ray and zapped the Dynamic Duo and so there they are, living in my house in 1/6 scale. 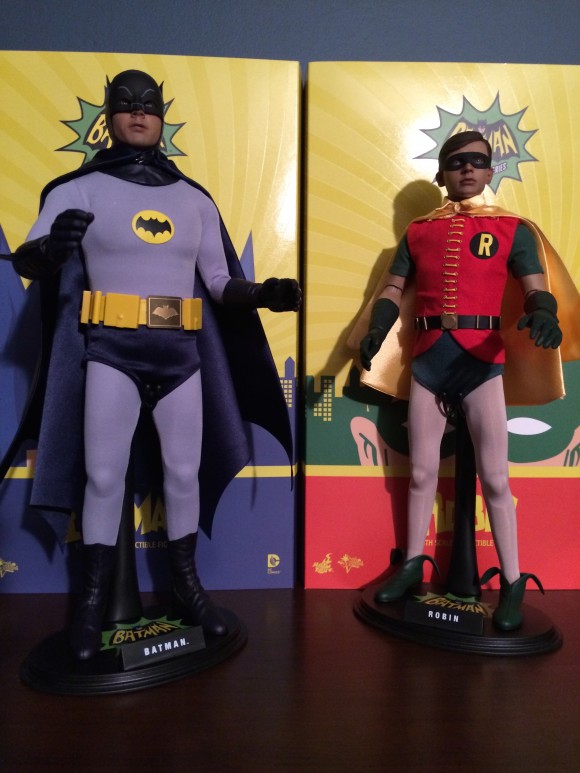 Uncanny. And I’m not talking about the X-Men!

Mego action figures will always own my heart. Mattel’s seemingly truncated line of 6-inch Batman ’66 toys will always have my admiration. And I can’t wait to see Figures Toy Company’s new offerings.

But this is something else entirely. It’s almost spooky how well Hot Toys, distributed by Sideshow Collectibles, captured Adam West and Burt Ward in their Batman and Robin duds.

Batman has his Westian paunch and comes with three distinct facial expressions — you can switch out the bottom part of his face — as well as crucial crime-fighting accessories such as Batarang, Batrope and Bat-shark repellent. There’s even a bomb, as in “Some days you just can’t get rid of a bomb!” 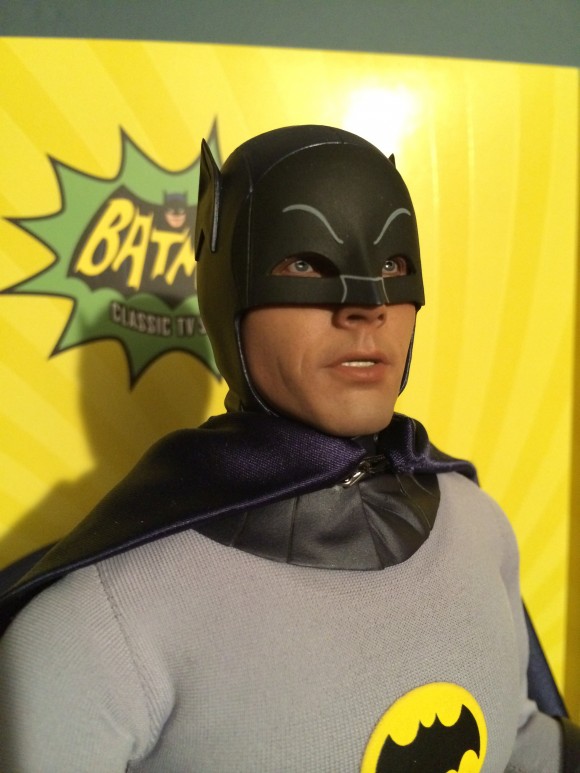 Robin has only the one face, but he might actually be even more dead-on for Ward than Batman is for West. He’s even wearing the light flesh-tone tights. He also comes with a set of crime-busting accoutrements — and both feature a variety of interchangeable hands, with Batman even getting a set of Batusi fingers. 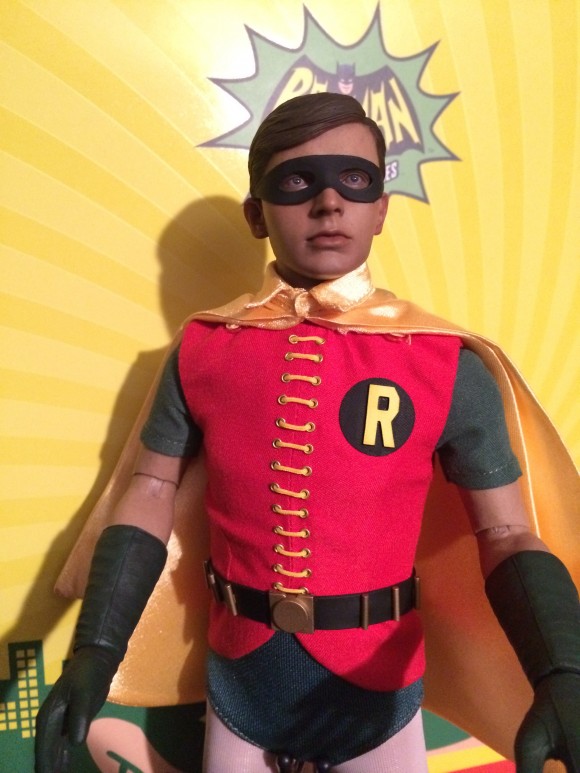 They come in appropriately brightly colored boxes, including a window diorama you can utilize if you wish to recreate Batman and Robin’s famous bat climbs.

Now, if only Hot Toys made a Sammy Davis Jr. figure, my life would be complete. 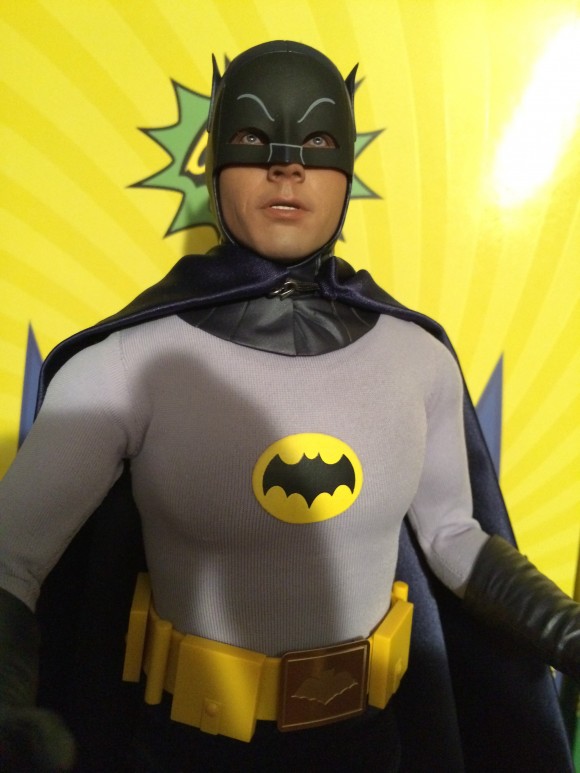 Before you accuse me of being totally in the bag on this, I do have to caution you. If you splurge for the roughly $400 you’ll spend for the pair (because let’s face it — you’re unlikely to get one without the other), BE CAREFUL.

While the figures are clearly top-notch, there are some quality control issues: Batman’s nameplate popped right off his stand and one of his facial expressions lost its magnet as soon as I took it out of the package. Superglue fixed both, but still.

More the issue is the fragility of the clothes — there are warnings in the instructions, even. I handled Batman only a little bit and his jersey developed a pull very quickly. There are also hidden snaps to keep his cape in place and one of mine broke right away while another doesn’t want to stick together.

(UPDATE: Talk about jiffy service — Sideshow Collectibles, which doesn’t make the figs but distributes them, was quick to add today: “Please keep in mind that these figures are hand-assembled and the costuming details are individually finished so there will be some variations from figure to figure. If for any reason clients discover any issues, like those you mention within your review, then the item can be exchanged for another under our 30-Day Return/Exchange Policy.”) 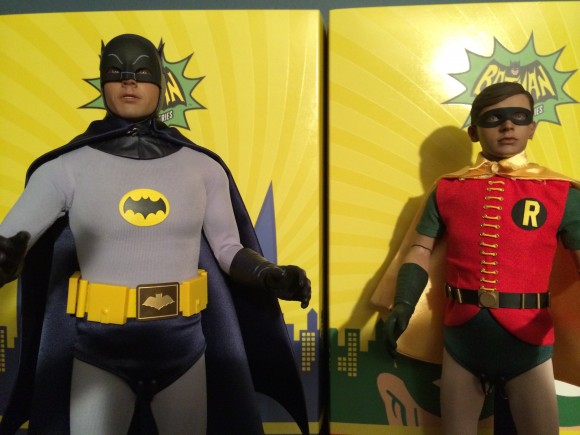 But on the whole, how can you go wrong with these?

But for me it’s Batman/Superman #10 — a fill-in issue in which Superman enlists Ray Palmer for a fantastic voyage inside Batman’s brain. 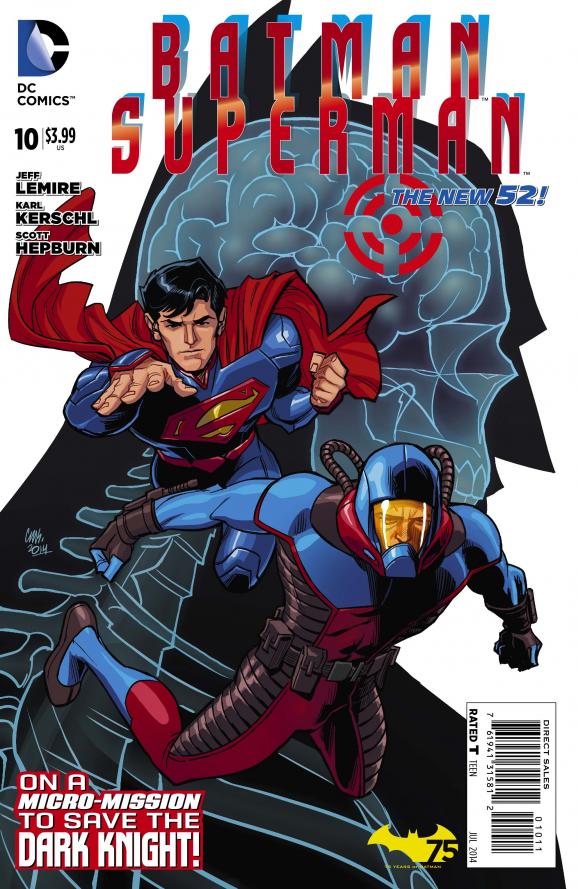 Is this Ray Palmer’s first time in costume in the New 52? I think it might be …

Why is this my pick? Because the original version of this story was one of Li’l Dan’s favorites! Brave and the Bold #115 from 1974 was a great tale in which the Atom was able to manipulate Batman’s seemingly dead body into fighting crime — by running all over his brain! 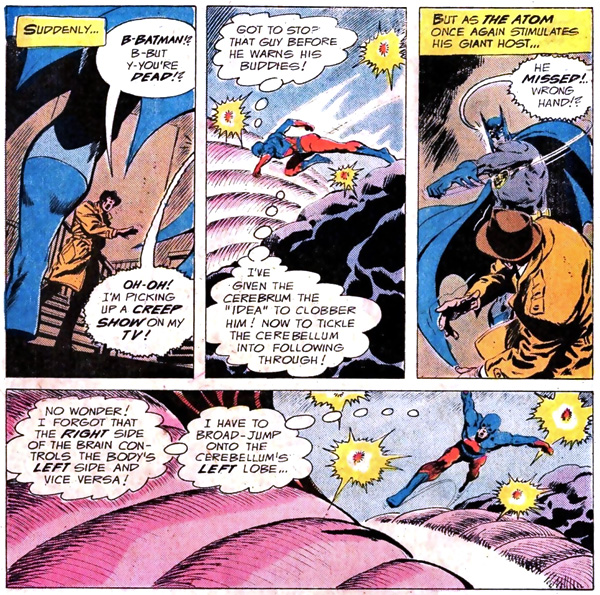 Art by the awesome Jim Aparo.

Plus, the folks at “Batman: The Brave and the Bold” cartoon had their fun with the idea too!