GIANT-SIZE DEFENDERS #3 Gets a Facsimile Edition 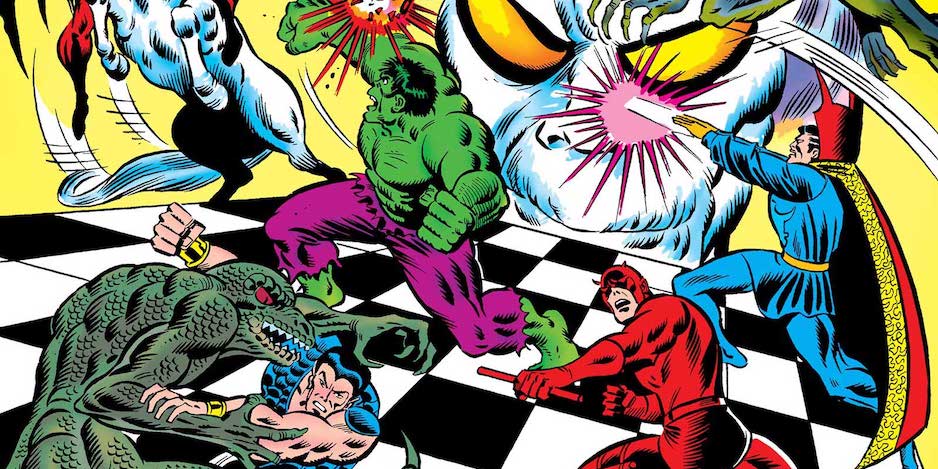 I’ve said it many times over in recent months that Facsimile Editions are special because they don’t just reprint stories, they include all the original ads, lettercols, back-ups and whatnot.

And that’s all true.

But it’s also worth pausing to consider what it was like in, oh, I don’t know, October 1974 to walk into your local convenience store, check out the spinner rack and grab a comic book by Steve Gerber, Jim Starlin, Len Wein, Dan Adkins, Don Newton and Jim Mooney. With reprints by Stan Lee, Steve Ditko and Bill Everett. And incidental art by Gil Kane and Klaus Janson.

Well, come December, you’ll be able to replicate that experience with the release of the Giant-Size Defenders #3 Facsimile Edition, which features Daredevil and the introduction of Korvac.

Check out Marvel’s solicitation blurb, which will be released officially soon: 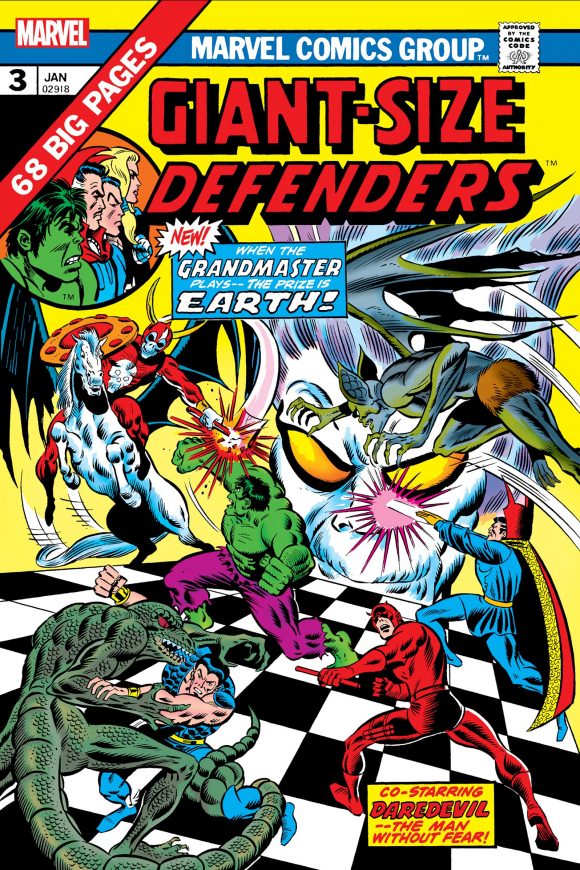 GIANT-SIZE DEFENDERS #3 FACSIMILE EDITION
Written by STEVE GERBER, JIM STARLIN, LEN WEIN, BILL EVERETT & STAN LEE
Penciled by JIM STARLIN, BILL EVERETT & STEVE DITKO
Cover by SAL BUSCEMA
It’s Daredevil’s first adventure with the Defenders! No, not Jessica Jones, Luke Cage and Iron Fist — we’re talking the original Defenders: Doctor Strange, Hulk, Sub-Mariner, Valkyrie and Nighthawk, the greatest non-team in comics! And now, the Man Without Fear must join them in a cosmic game of chess played between the ever-manipulative Grandmaster and the playful Prime Mover! The rules are simple — Daredevil and the Defenders vs. a dangerous group of aliens…with the fate of the Earth at stake! And among these enemies is a major threat with a big future ahead of him — Korvac, from the year 2977! One of the biggest power players in the Marvel Universe makes his debut in this action-packed classic! It’s one of the all-time great Marvel comic books, boldly re-presented in its original form, ads and all! Reprinting GIANT-SIZE DEFENDERS #3.
64 PGS./Rated T … $4.99

Now, see, even a casual Marvel fan would be all over this.

— The cover is credited by Marvel to Sal Buscema, though the Grand Comics Database, which is our go-to for such matters, says it’s Ron Wilson inked by Joe Sinnott. What say you, True Believers?

— Higher-end, unslabbed copies of Giant-Size Defenders #3 have been going for $150-$250 on eBay. The Facsimile Edition? Five bucks.

— This is one of three Facsimile Editions coming from Marvel in December. We told you about 1977’s Star Wars #1 the other day and you can click here for the rundown. There’s also Jack Kirby’s The Eternals #1. Because, y’know, movies and stuff.

— By the way, in case you missed it, we’re giving away some Marvel Facsimile Editions! Just check out Anthony Durso’s column 13 MARVEL FACSIMILE EDITIONS WE’D LIKE TO SEE. (Click here.)