Been waiting for awhile for this one.

For Diamond Select’s Batman ’66 statue line, it was ladies first: Yvonne Craig’s Batgirl and Julie Newmar’s Catwoman, both of which came out in early 2016. 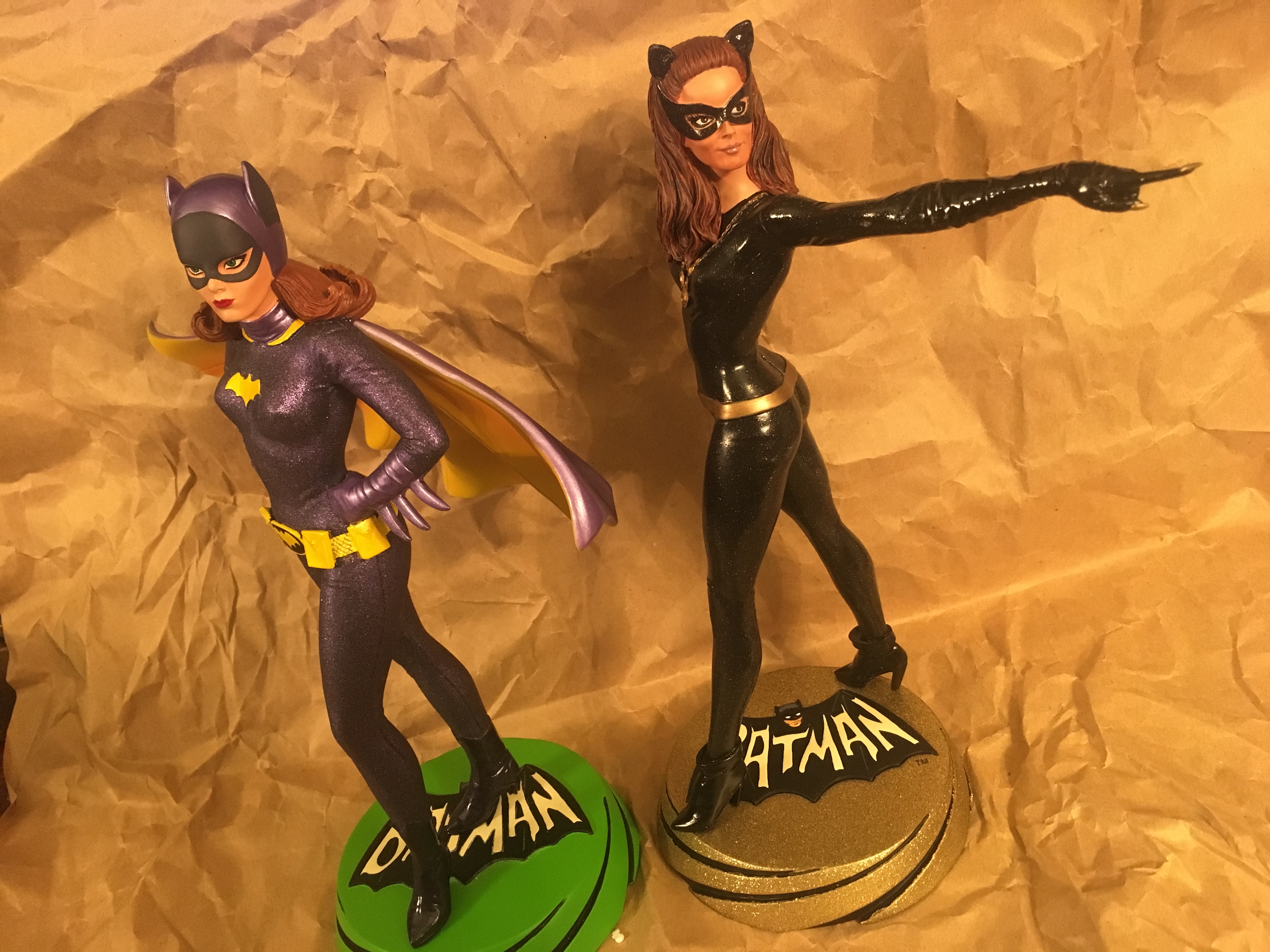 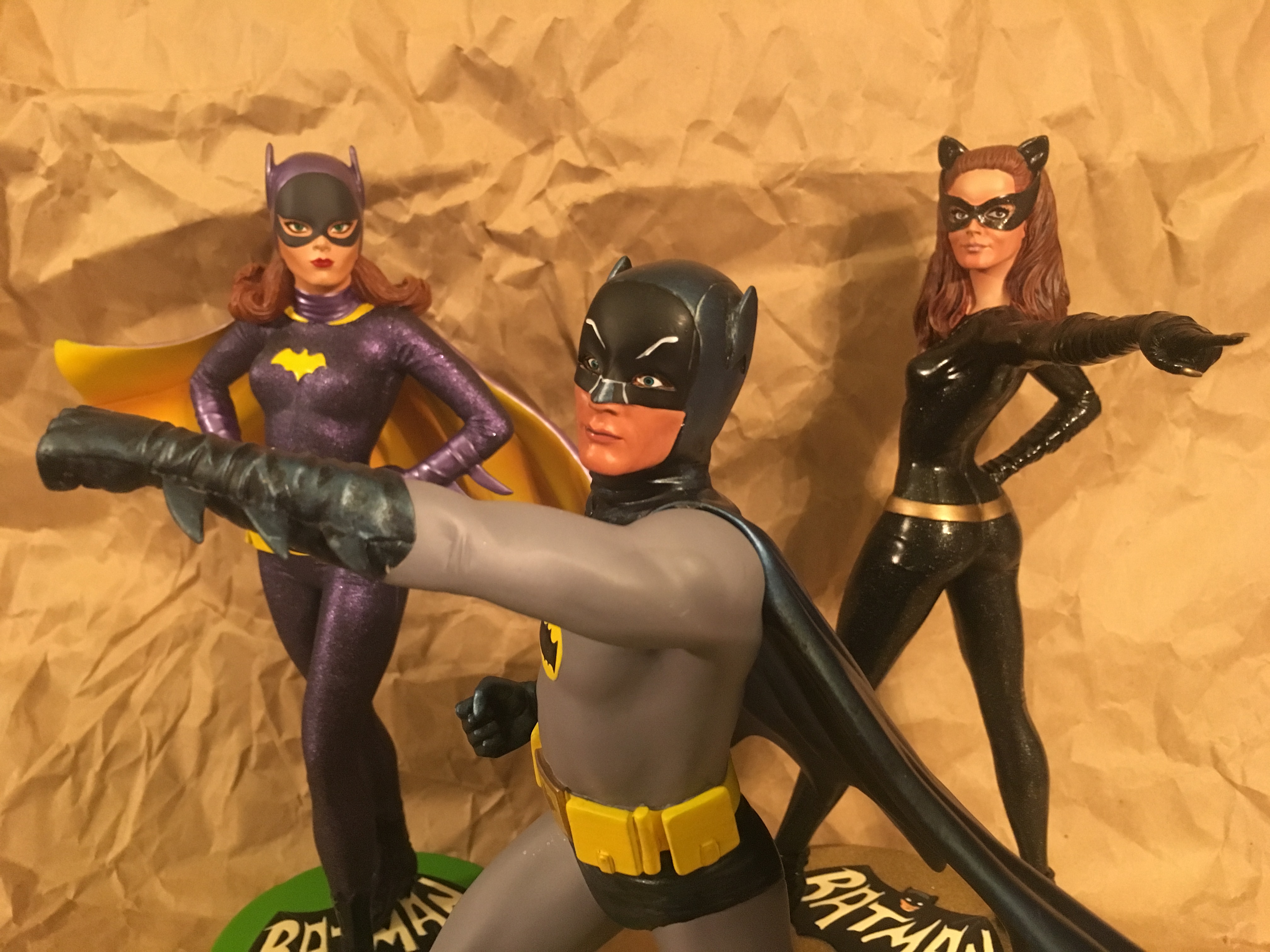 Batman stands about 12 inches tall and unlike the first two statues, he’s captured in action — mid-punch against an invisible adversary. It’s a winning sculpt by Clayburn Moore and design by Barry Bradfield. (You can read more about how they created him — with many excellent, behind-the-scenes pix — by clicking here.) 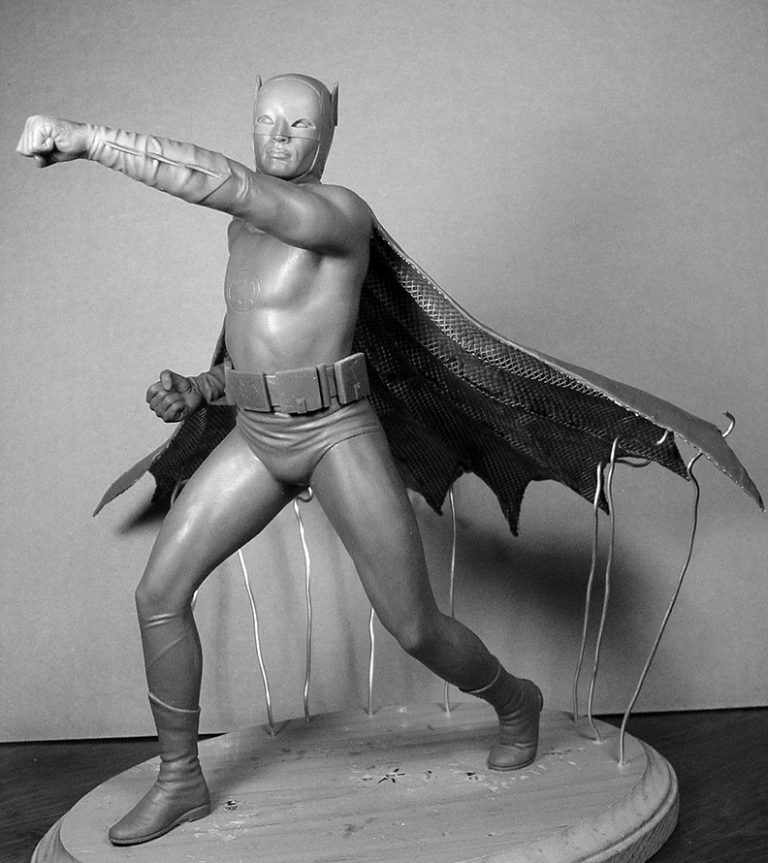 Now, down to the nitty gritty and the volumnious pix of the finished product:

This one of the coolest Batman ’66 items on the market (actually it hits 1/4, but you know what I mean). For example, as much as I like Diamond’s busts (click here), I like their statues that much more. I wish they had a Batman ’66 action-figure license, actually. 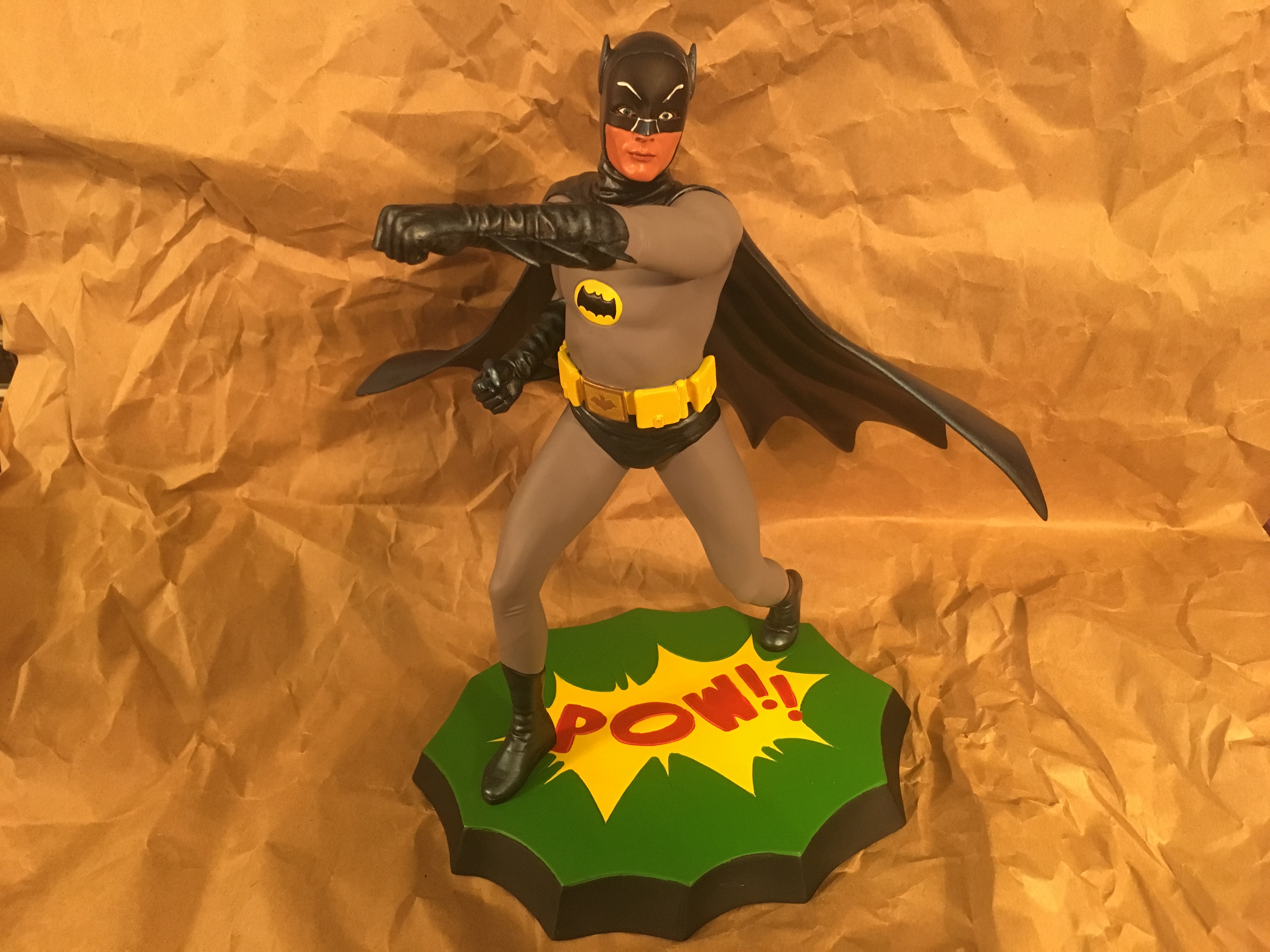 The resin statue is detailed yet sleek. Some items make West look a little slimmer than he was but this sculpt accurately reflects the actor’s bulkier upper body and skinnier legs.

Naturally, if you’re going to produce a Batman ’66 statue of any character, you’ll be compared to Brand X. The strength in this statue is its action sculpt and its relative affordability: It lists for $150, as opposed to other statues that go for $250 or, in the case of a larger one coming out from Sideshow soon, $450. 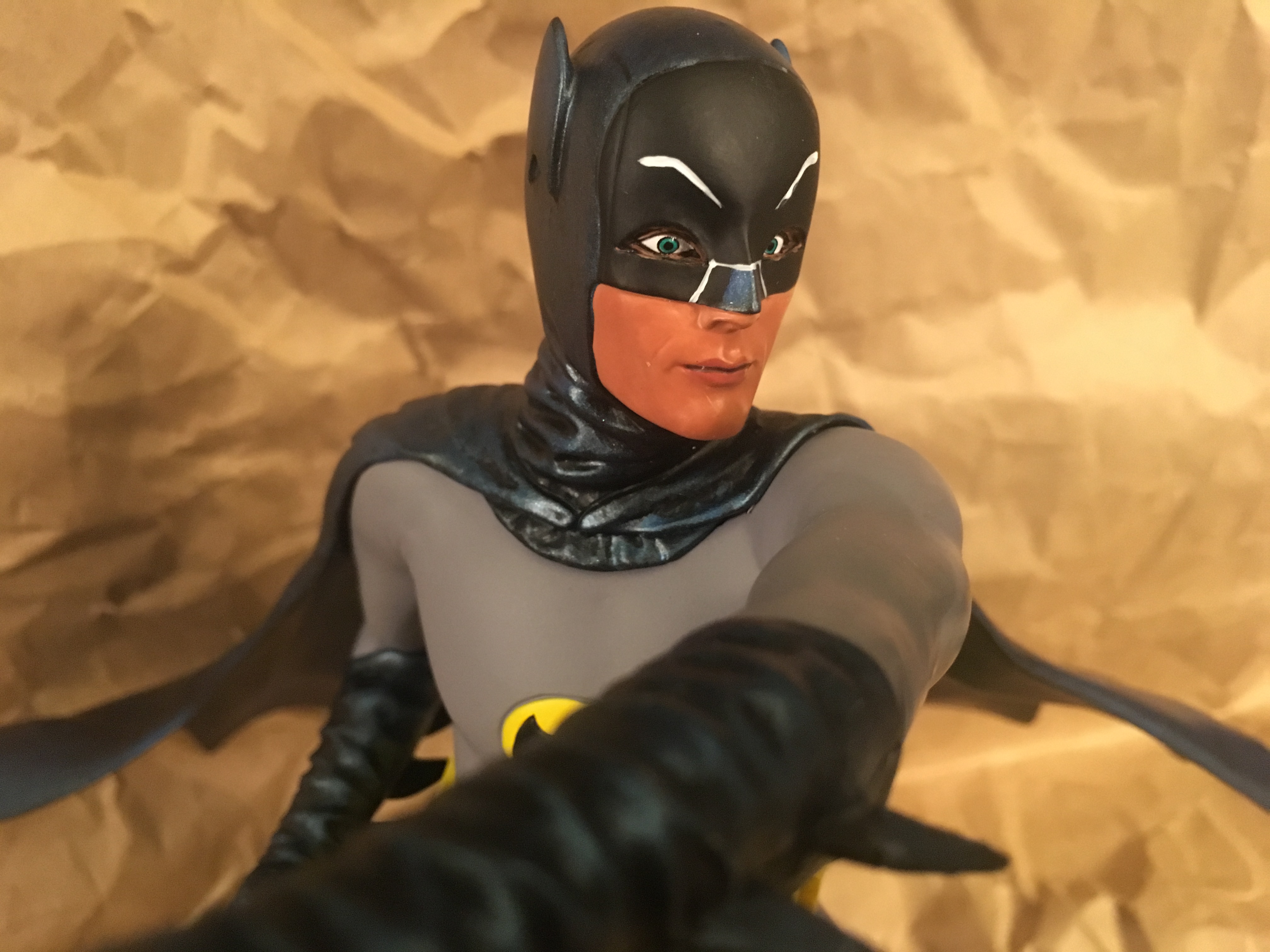 Of course, it’s the face that’s scrutinized the most. Of the three Diamond statues so far, I think this is probably the best in terms of accuracy. All three are somewhat idealized versions of the actors but West’s cowl does most of the work in keeping him on-model. (By the way, since he’s lunging and his base is lower, the statue is actually a little shorter than Batgirl and Catwoman overall.)

And while I appreciate that other merchandisers include dioramas, Diamond’s versions are more maneuverable and flexible for display. 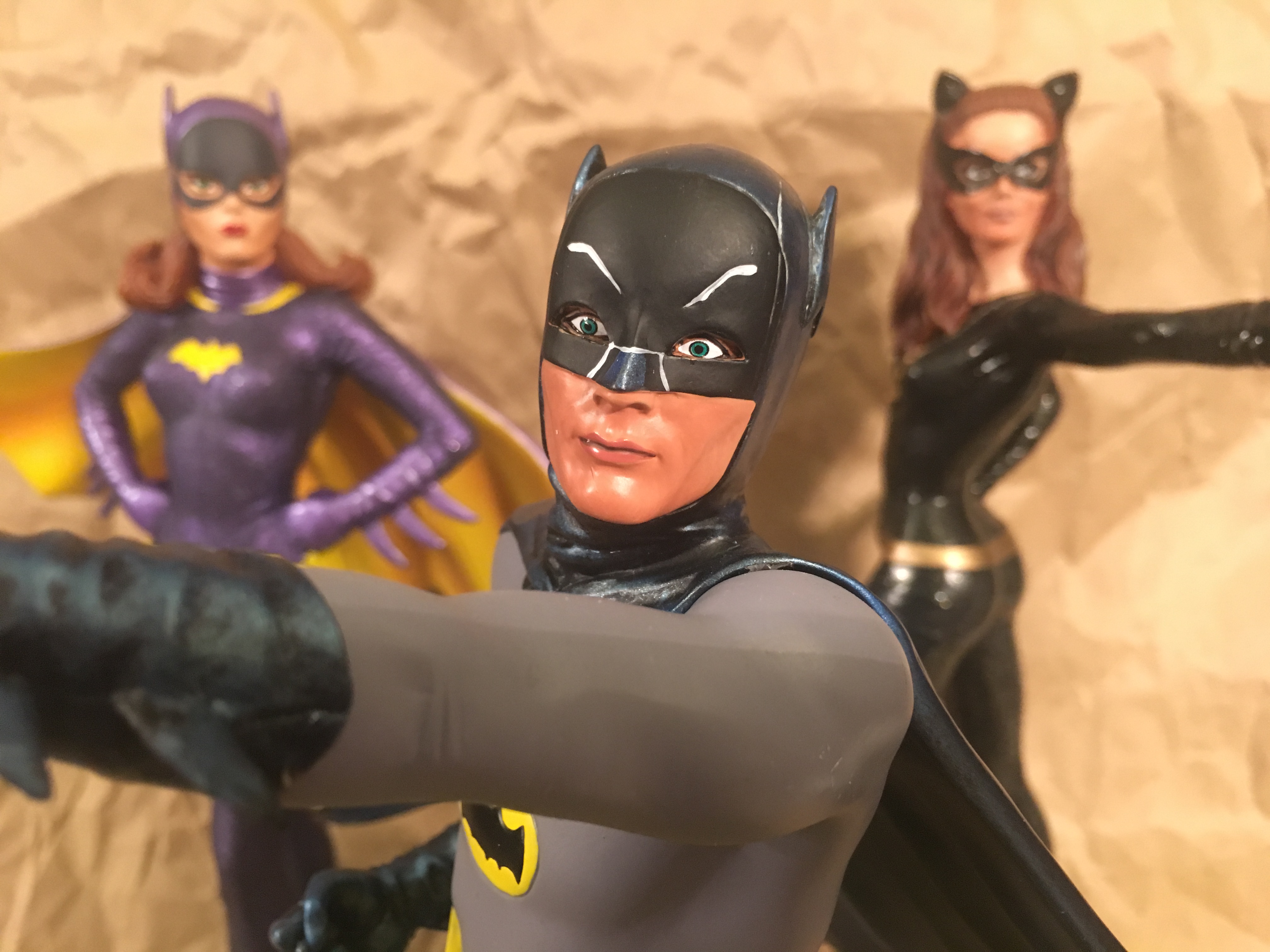 The downside: You’ve probably noticed in these photos that the paint application on the white accents of his cowl appears a little sloppy. That said, you don’t notice when it’s on your shelf. I can attest to that.

Now, we know Cesar Romero’s Joker is next in the series (click here). Here’s hoping we get Robin after that. Because as dynamic as this statue is, it needs to be part of a duo.

Now, dig the rest of these pix: 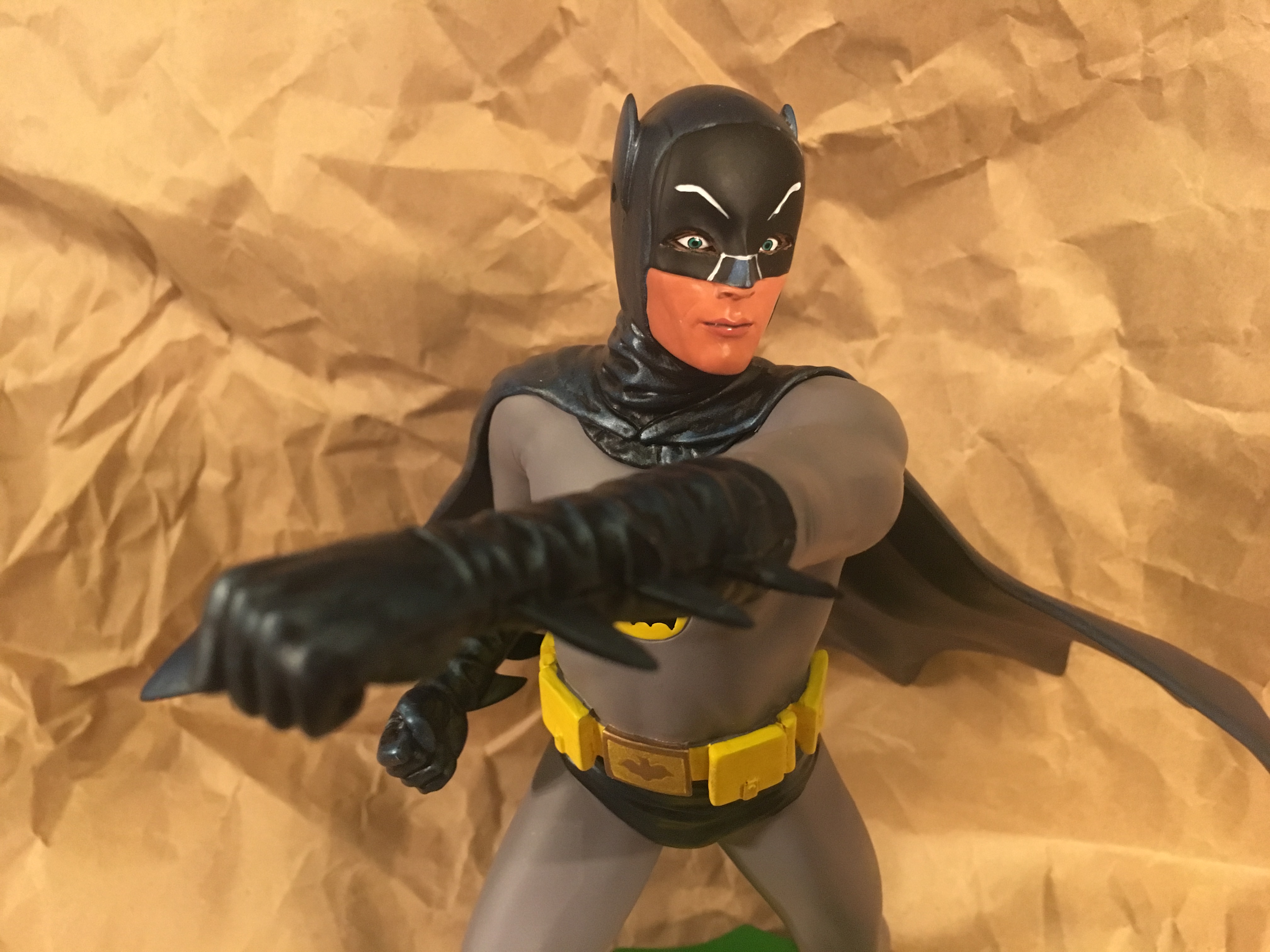