PIX! PIX! PIX! NECA’s announcement of their new line of DC heroes (and villain) sent me — and thousands of others — into an absolute tizzy.

I gotta tell you, the Adam West Batman and Heath Ledger Joker live up to the insta-hype.

I was able to land West and Ledger in short order with Reeve Superman to come, so I’m focusing this review on those two Bat-characters.

For all the info on the three figures (plus the two HeroClix Extreme figs) — including how to get them — click here. For the FIRST REVIEW of Superman, click here. 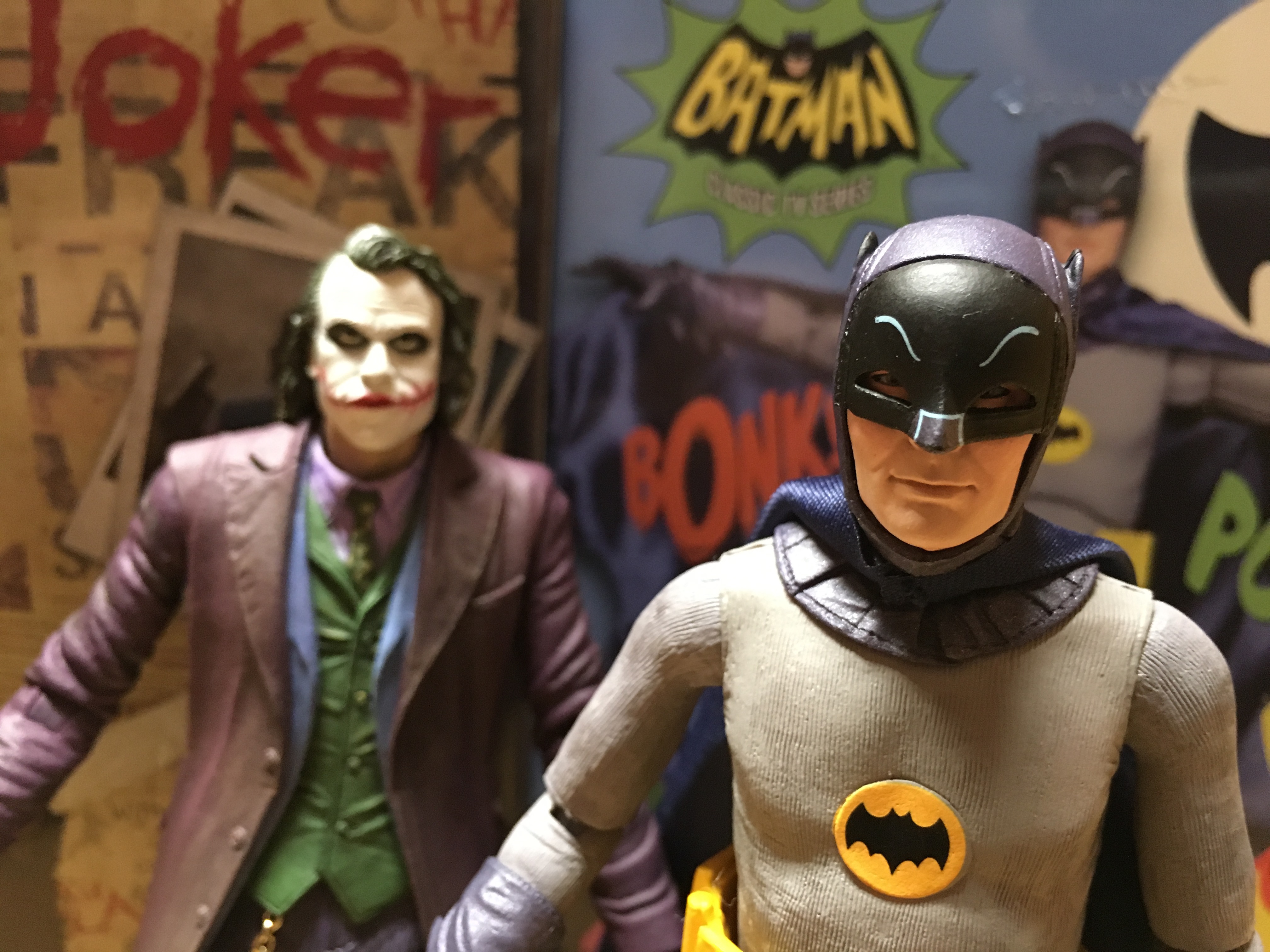 This figure immediately takes its place among the very best of the Batman ’66 merch to come out in the last couple of years.

Bang for the buck, it may very well top of any of the West figures — the quality of the likeness is close to Tweeterhead and Hot Toys levels at a mere fraction of the price. It’s $30 or so — including a DVD — and that is a absolute bargain. 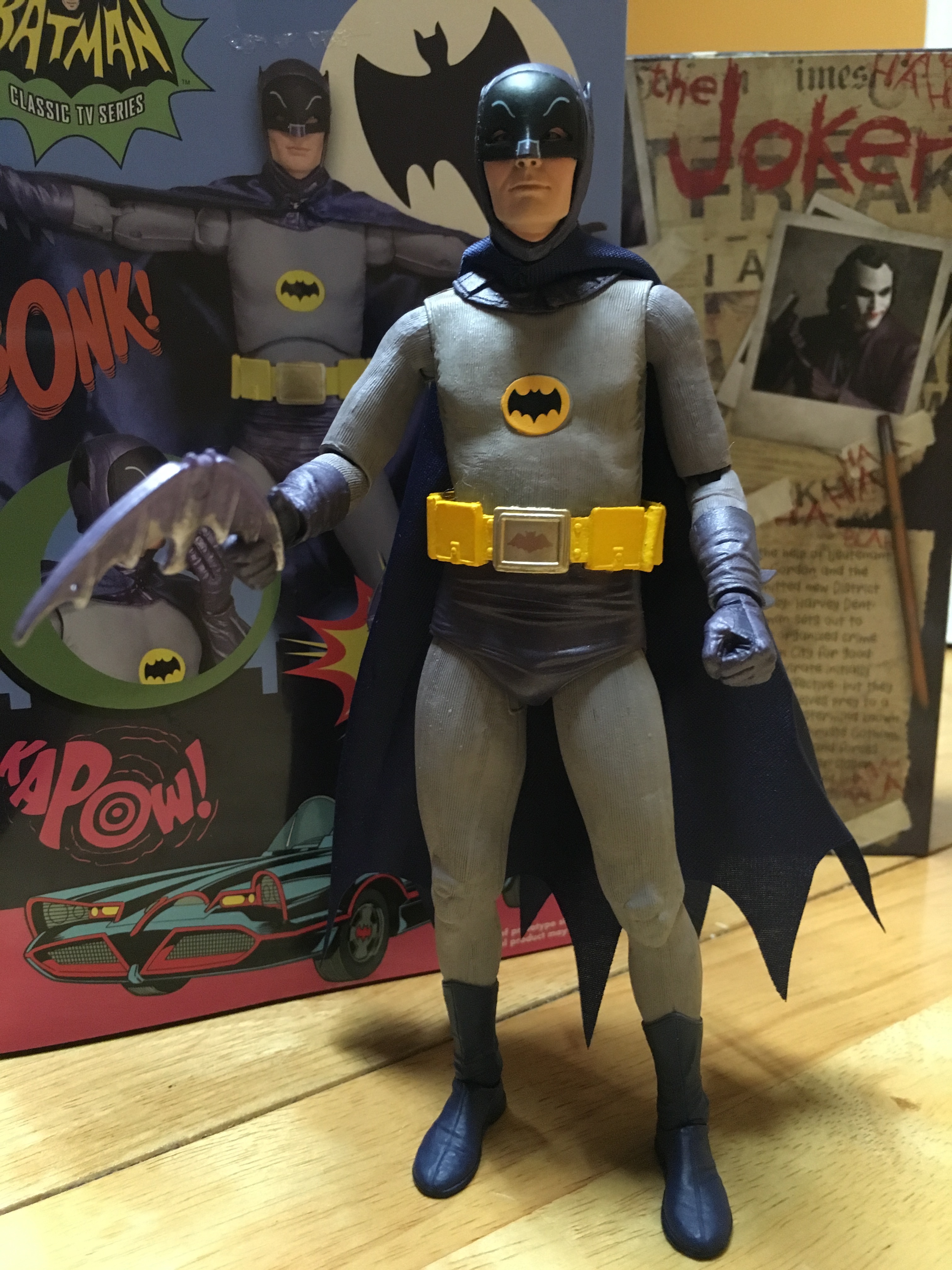 As far as scale comparisons, I personally liked Mattel’s 6-inch series though I understand why a lot of fans found it lacking. The likenesses weren’t always on the Batmoney, and were a little on the cartoony side for some. But I appreciated them and am disappointed that we’re not likely to get any more. 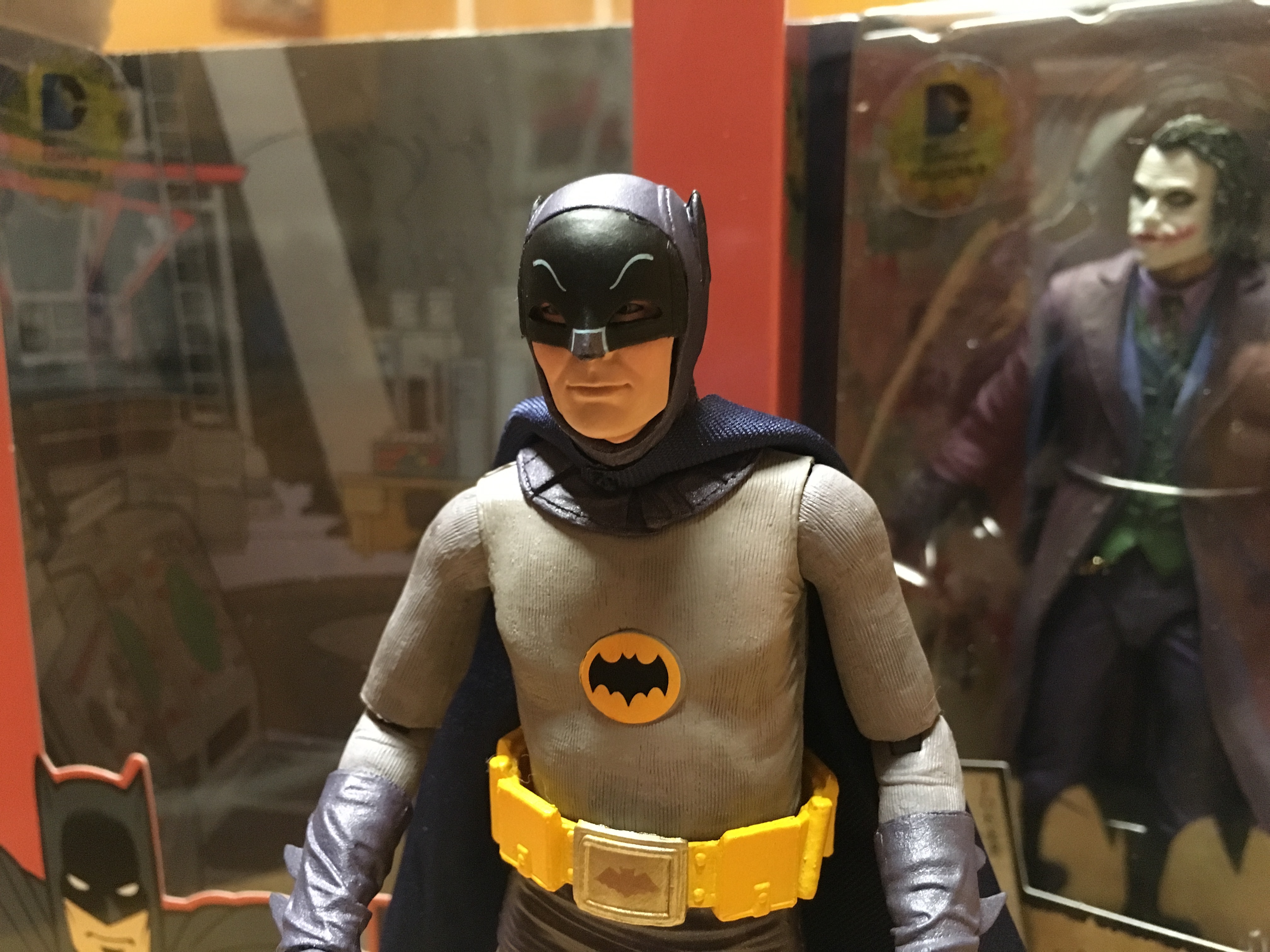 All that said, this 7-inch figure blows the Mattel line away, capturing Adam West’s body type as well as the deceptively complex details of his outfit. The seamwork on his cowl alone is emblematic of the importance NECA places on the little things. The color scheme is accurate and the sculpt captures West’s specific body type — long, skinny legs, slightly soft in the middle and arms without sharp tone. (In other words, built like an average tall guy in the mid-’60s.) 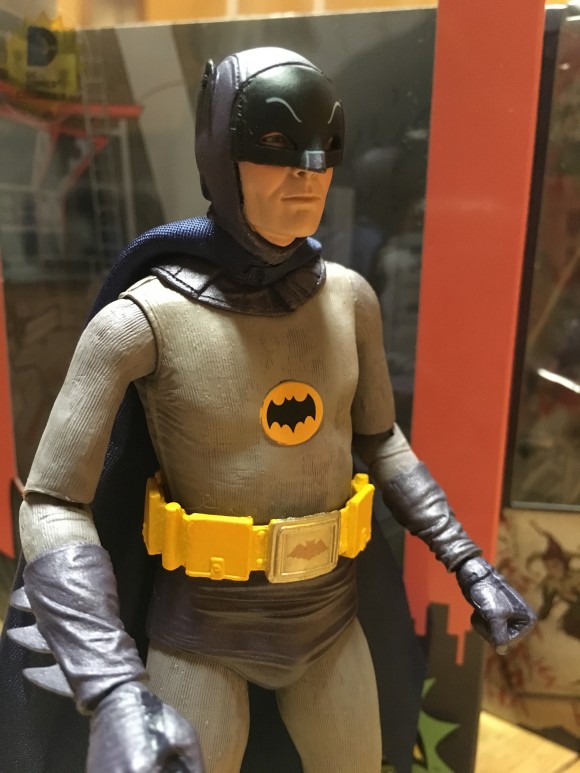 Perhaps the most important element of the figure is that NECA wisely opted not to go with an abdominal cut. I didn’t love the way the company’s 18-inch figure was constructed; that cut was so noticeable that it really detracted from an otherwise beautiful figure. This figure corrects that shortcoming.

I was also happily surprised that Batman comes with a change of hands — as well as a Batarang and a Bat-communicator. The box art is similar to the 18-inch box, including the Batcave background on the interior. 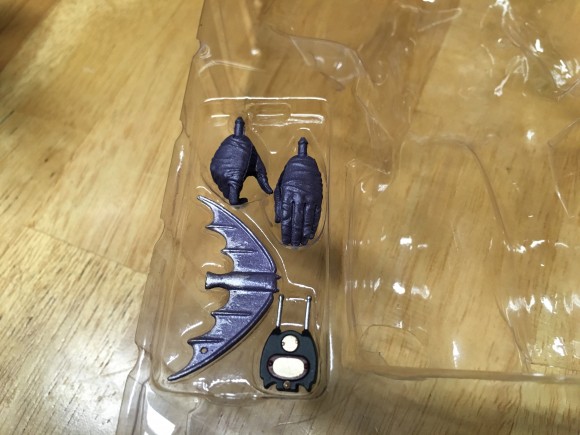 The only thing missing? A Boy Wonder to go with this Caped Crusader. 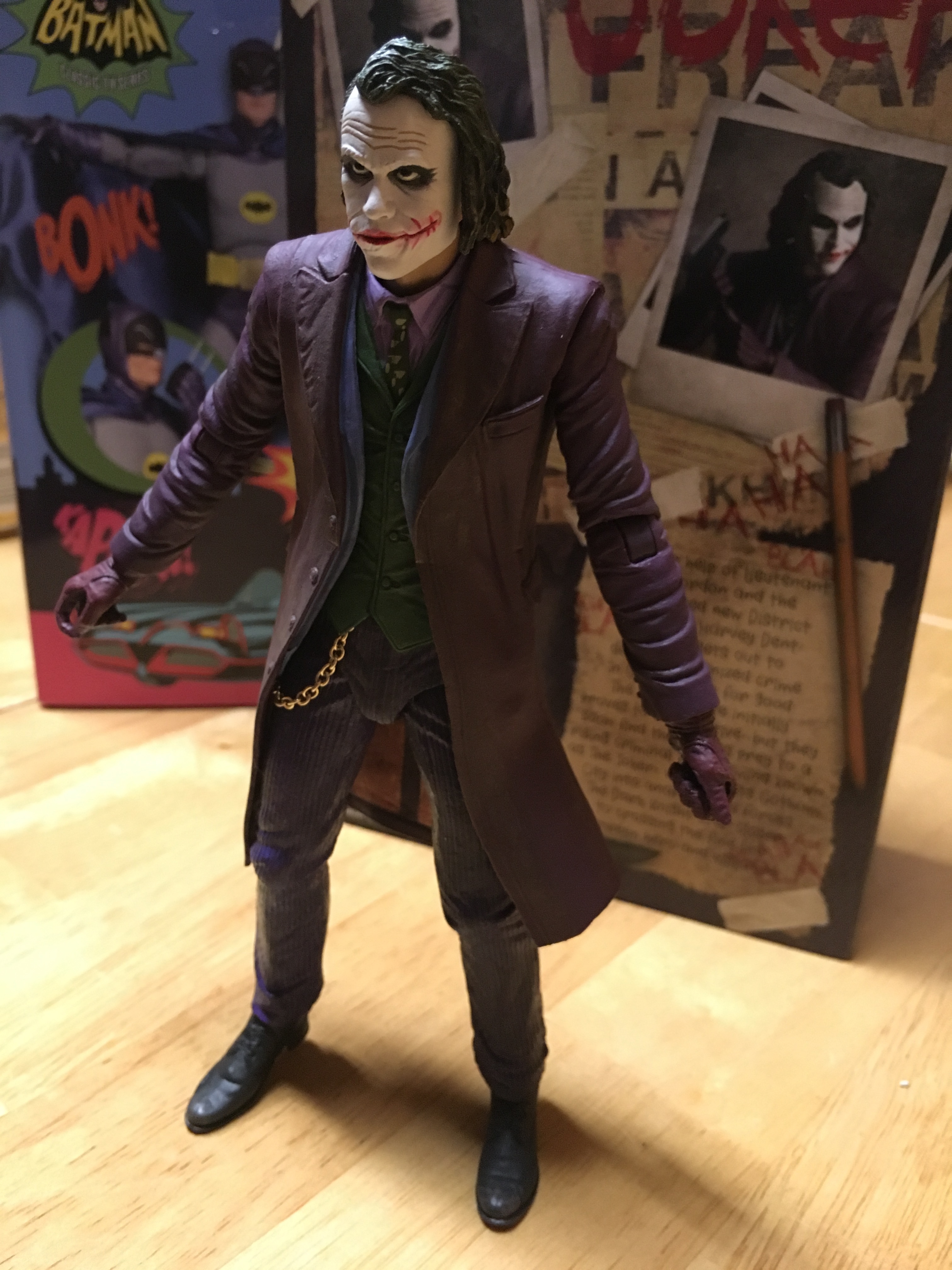 Heath Ledger’s anarchic psychopath has been produced many times over, going back to even before The Dark Knight premiered in 2008. (Cripes, has it been more than seven years already?)

The end result is that of the three actor figures in the selection, this is the one that interests me the least. But that’s purely a personal preference — because the figure itself is superb, down to the faux dirt and dust on his purple long coat, his watch chain and the “satin” lining of his coat. 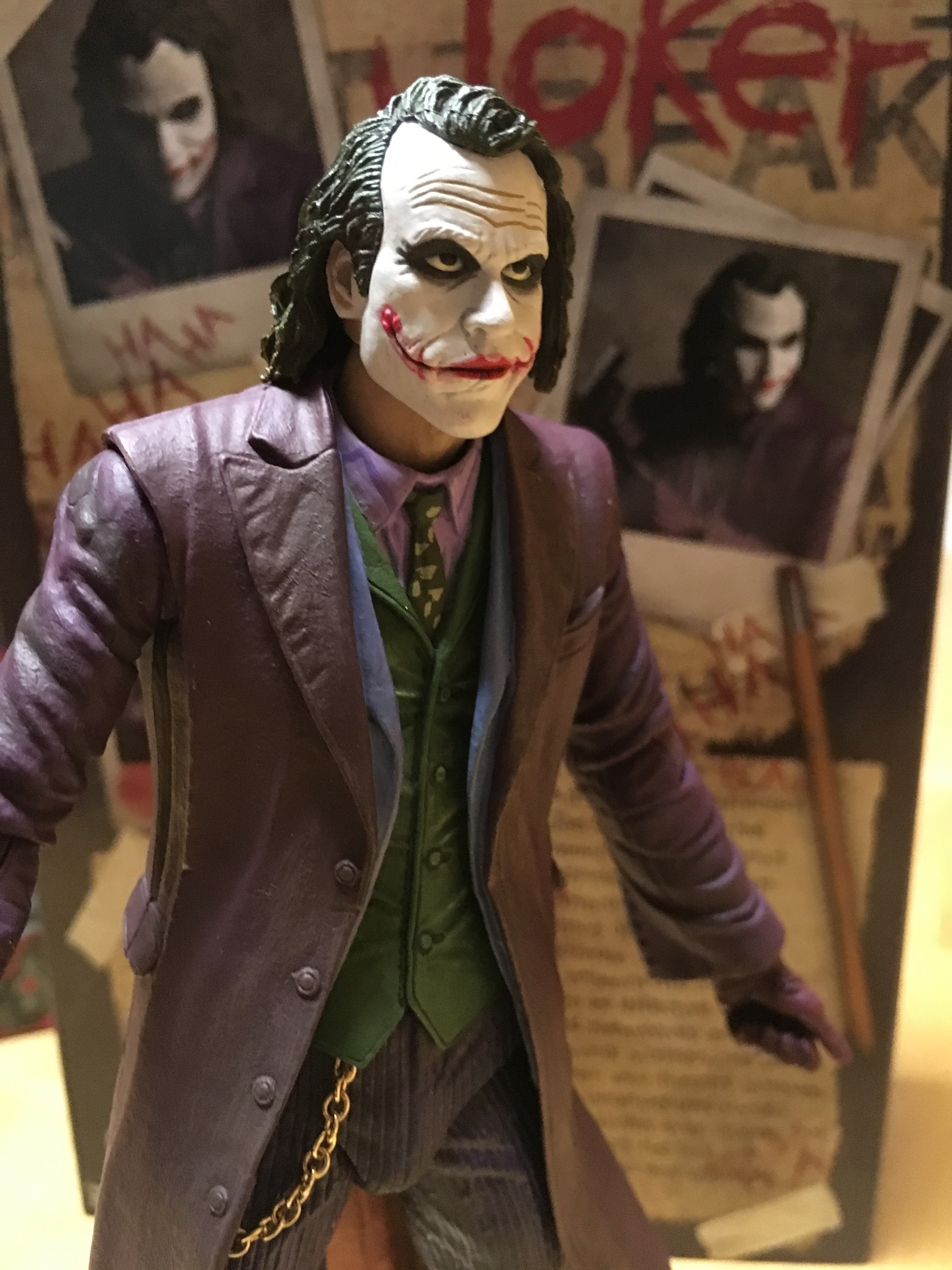 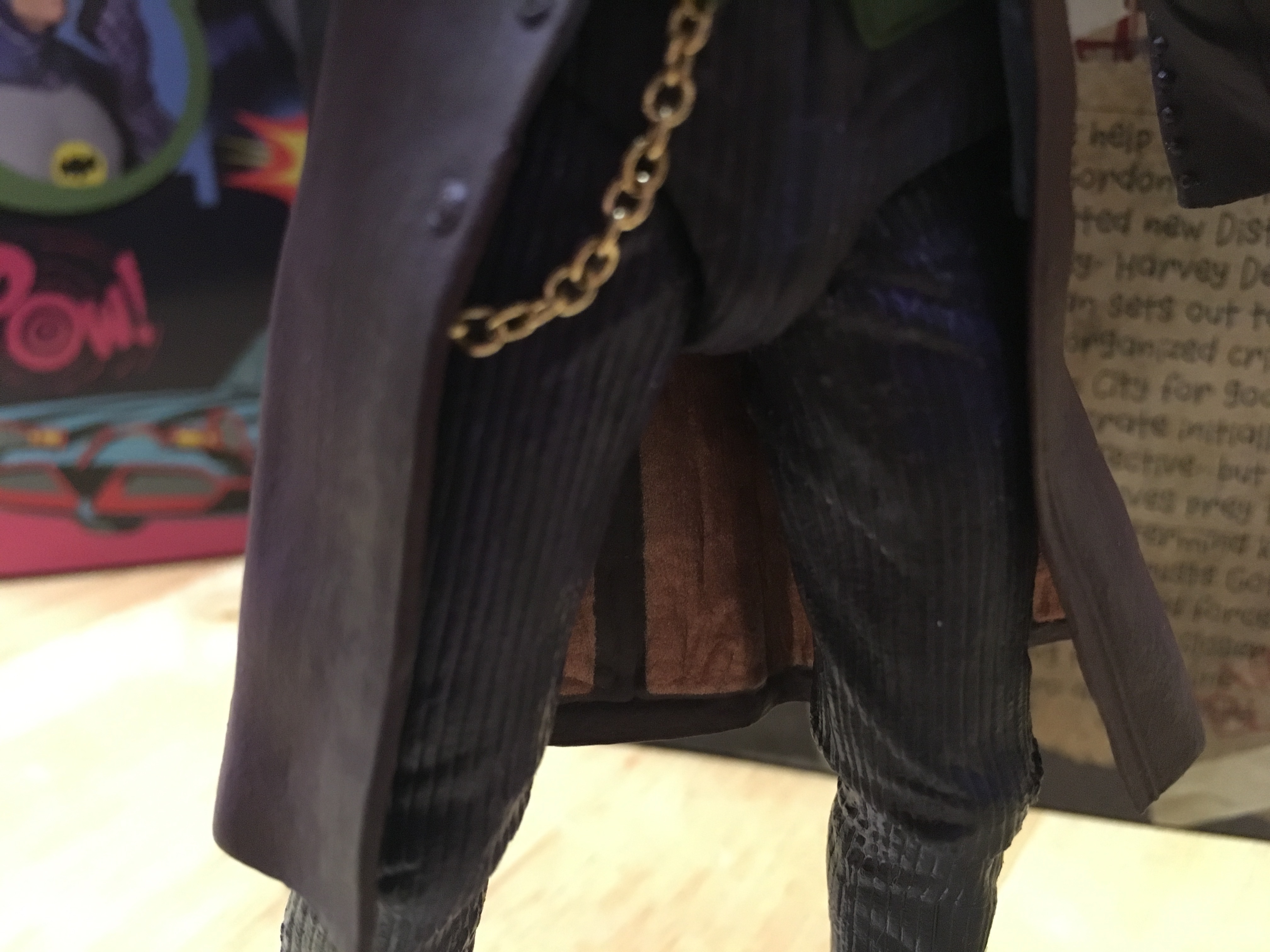 The most obvious comparison is to Mattel’s Movie Masters series — and like with Batman, NECA’s figure is far superior.

But there’s also Medicom’s MAFEX line and that’s a more challenging side-by-side comparison. NECA Joker comes with a selection of weapons — including his especially badass blade. The Medicom figure, on the other hand, comes with a broader selection of accessories. But it has really odd joints that detach too easily — and a significantly heftier pricetag. 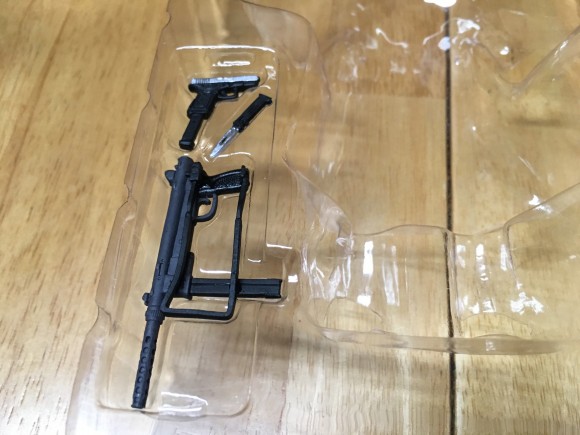 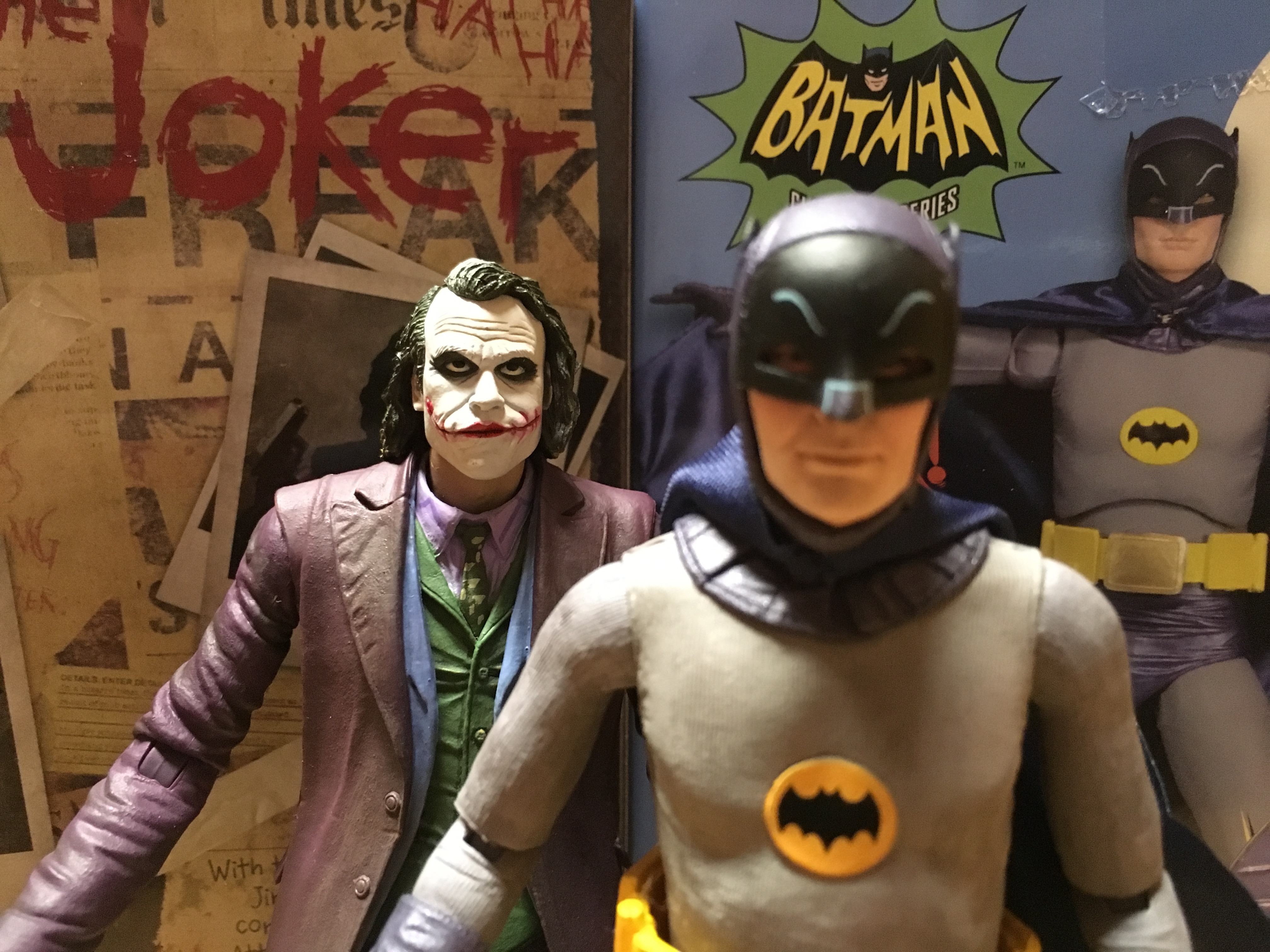 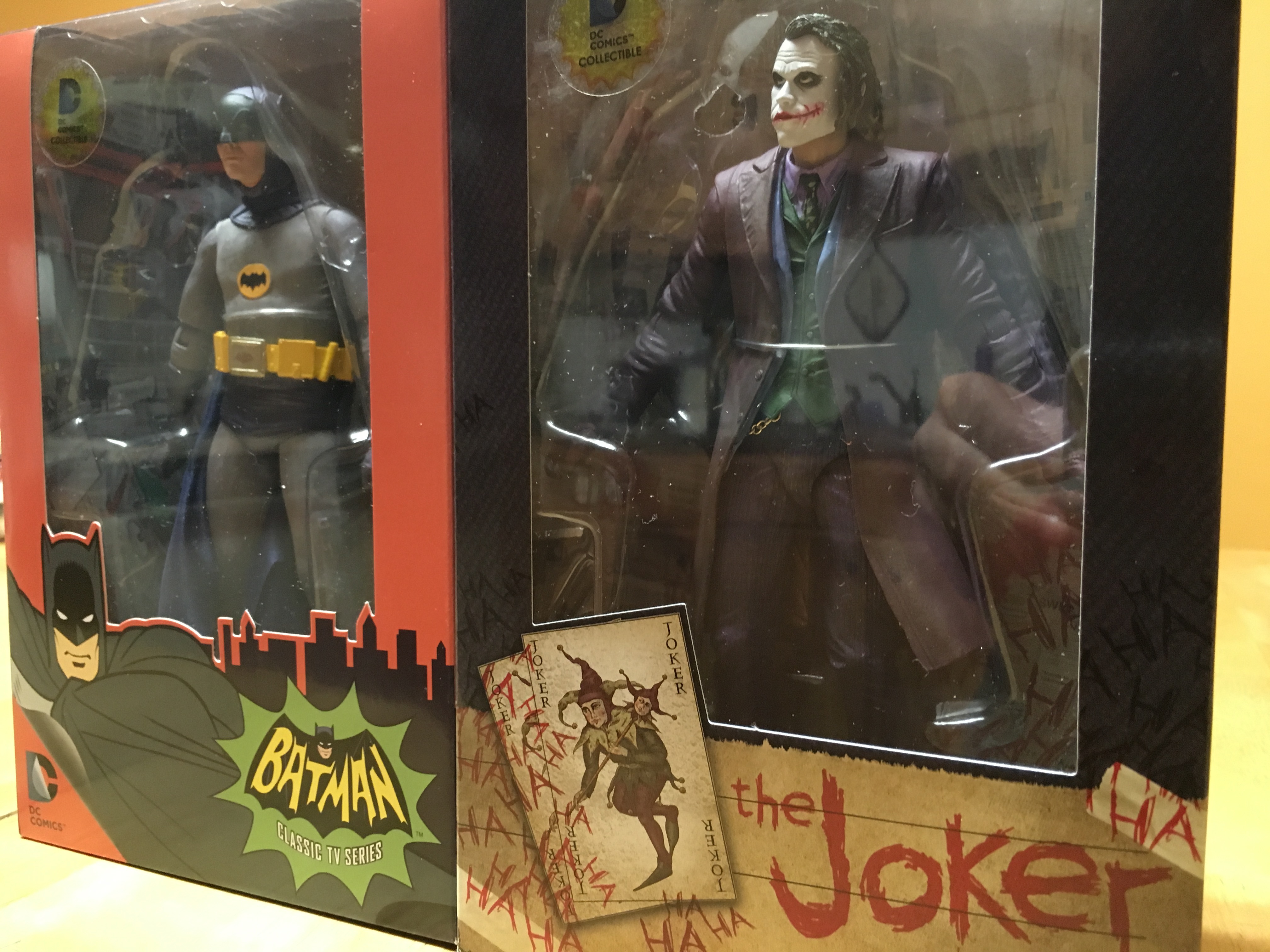 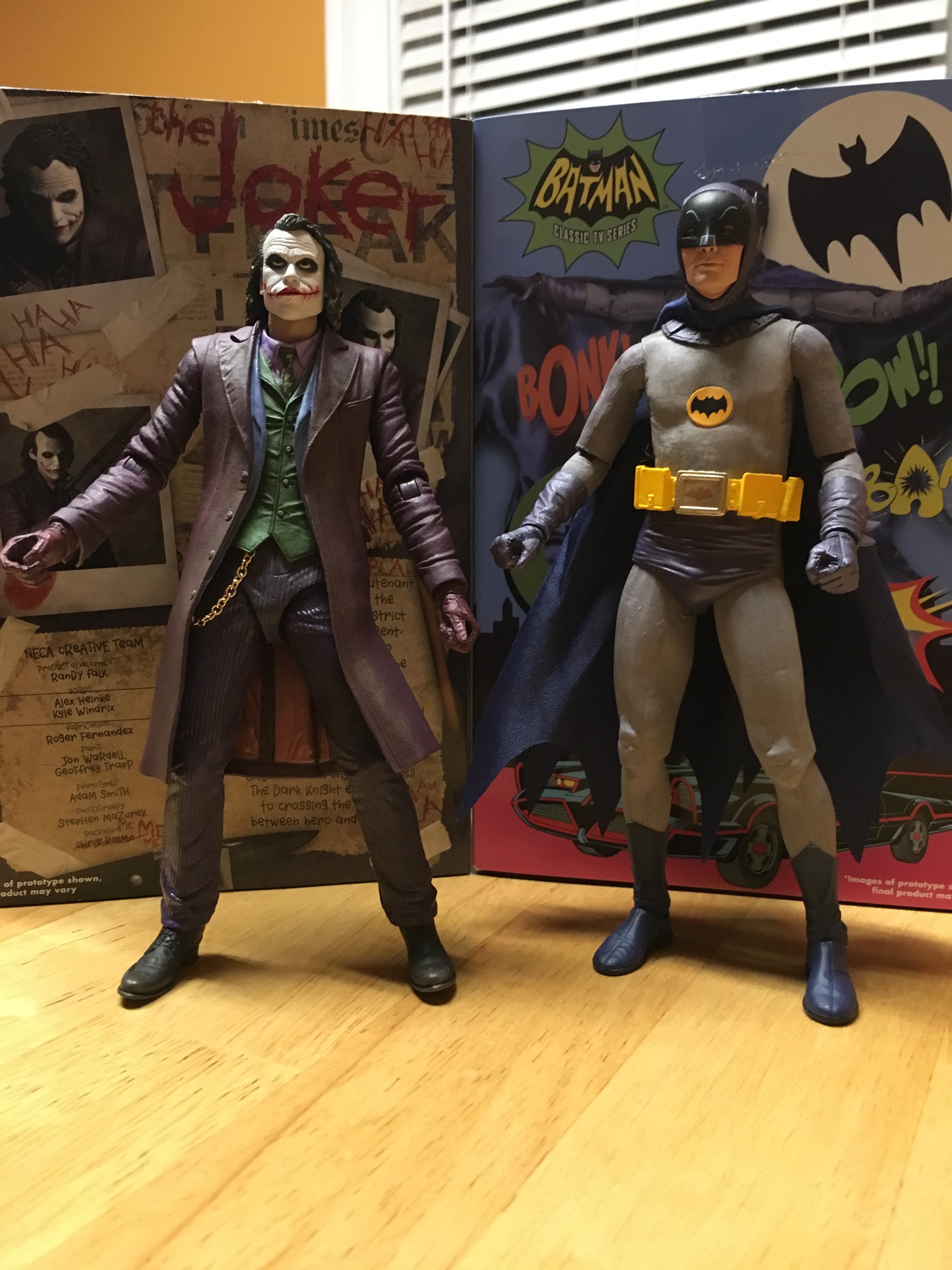 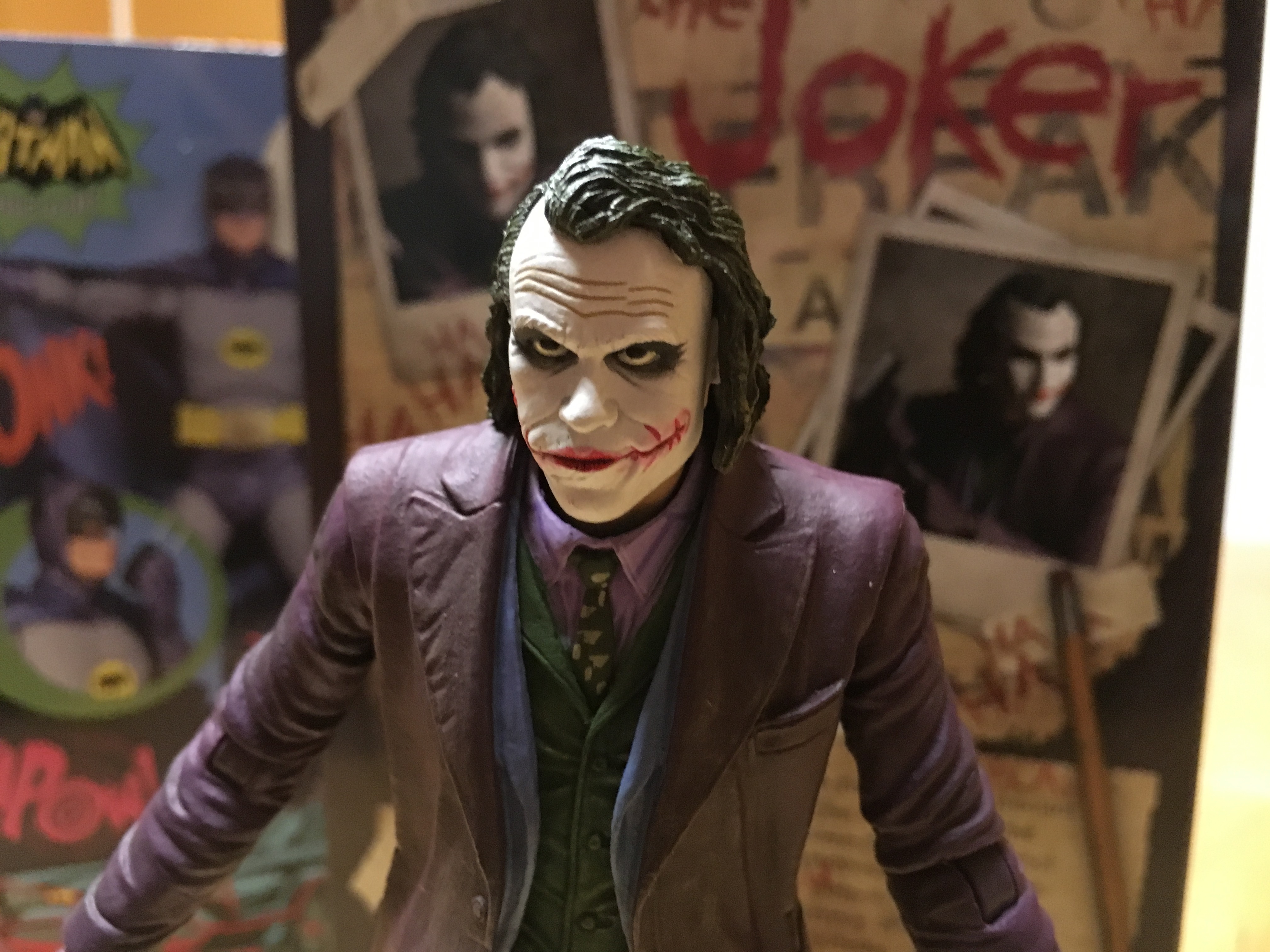 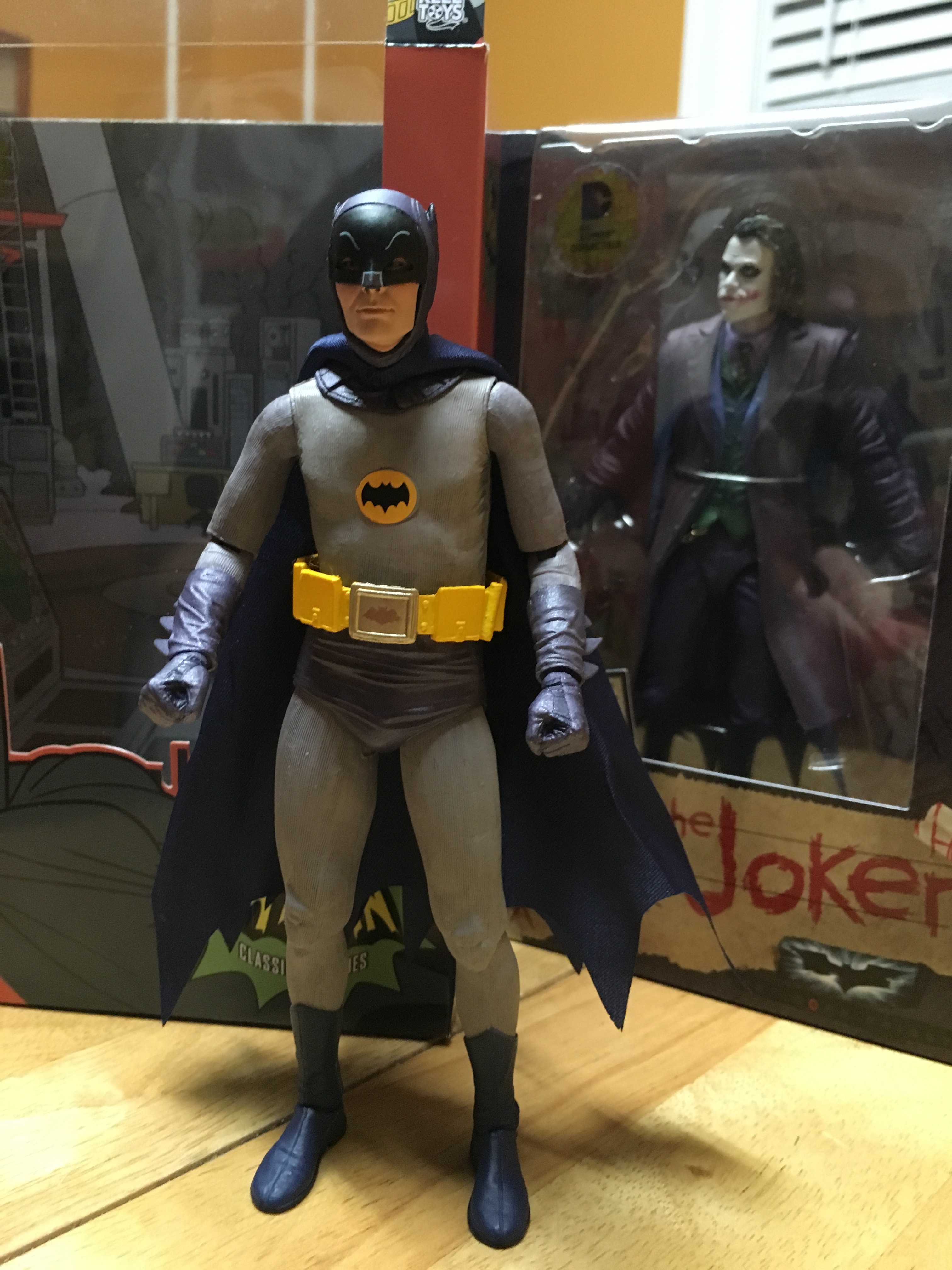