The dust has settled on this week’s announcement (click here) that Gotham’s guardians will be meeting up with the Riverdale kids this summer in Archie Meets Batman ’66, so it’s time now to give you some EXCLUSIVE teases about what’s to come in the 6-issue miniseries from Archie Comics and DC.

As you already know, the story’s co-written by Jeff Parker — who handled writing duties on the bat’s share of DC’s Batman ’66 comics — and Michael Moreci. The series is due to launch in July and they were cool enough to let us know some of what we can expect — including the basic plot of the whole groovy shebang and just who might be showing up.

Oh, and there’s more where this came from. Look for our conversation with the art team of Dan Parent and J. Bone, coming soon.

Meantime, dig this Q&A with Parker and Moreci: 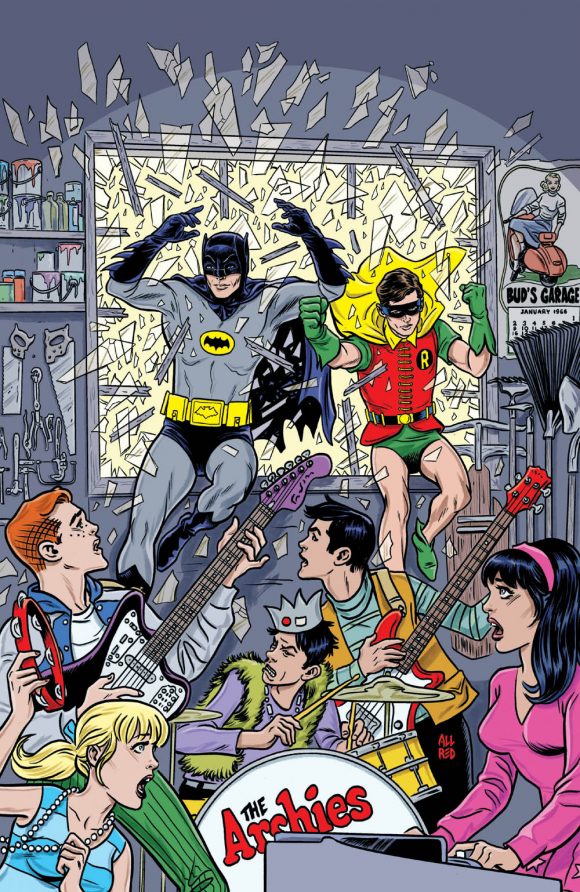 Dan: So which is it: Archie and the gang visit Gotham — or Batman and Robin show up in Riverdale? Or both?

Michael Moreci: Well, we see both, but it’s more Gotham coming to Riverdale, which is a ton of fun. Just wait until you see Batman’s rogues gallery running around Riverdale High School. It’s a hoot.

Jeff Parker: The United Underworld — the core group of Batman villains as seen in the ’66 movie — decide to stake out another city as a home base, something less Gotham-sized but with a millionaire they can control: Riverdale! 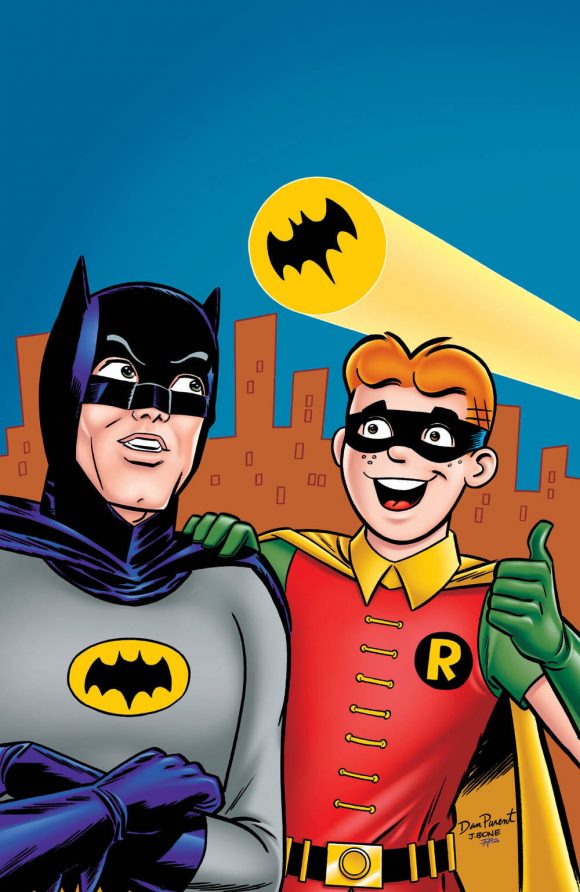 Dan: Jeff, you’re an old hand at Batman ’66 by this point. What was it that appealed to you about this particular project?

Jeff: When Archie co-president Alex Segura approached me, my son and I had just been watching Riverdale on the CW; it seemed like fate. And the mid ’60s were a big time for both Archie and Batman. Also, he said Dan Parent and J. Bone would be the art team, which inspires a lot of confidence in the project.

Dan: Michael, this is your first Batman ’66 gig, right? Tell us your background with the TV show.

Michael: It is! And I can’t even believe it’s real, to be honest. I mean, I grew up on Batman ’66. It was on TV in my house all the time. Adam West IS my first Batman, and he’ll always be cemented in my memory as the man who brought Batman to life for me. That show was like nothing else, at least not in my house. I think it was the first time I encountered a cliffhanger, and it would kill me waiting for the next episode. But everything about it, I loved — I loved waiting for certain villains, I loved seeing new villains I’d never known before — and when Batgirl was on?! Nothing better. 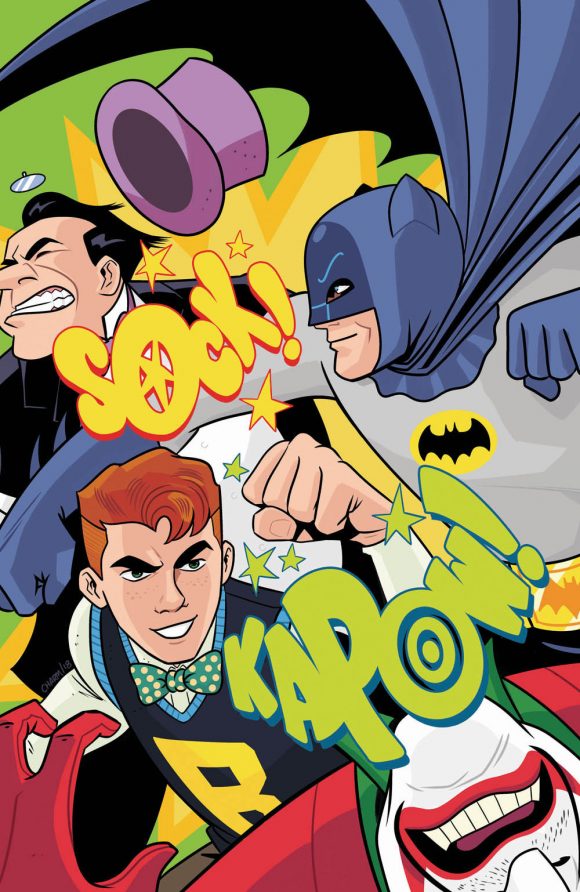 Dan: Michael, getting the TV show’s “voice” is harder than it looks. Some writers get it more than others. What’s been the biggest challenge for you?

Michael: That is SO true. Thank goodness I’m working with Jeff, who writes Batman ’66 better than anyone on the planet. I’ve been studying his run very carefully, trying to pick up on all those little innuendoes, puns, and everything else that’s loaded into the Batman ’66 dialogue.

The biggest challenge, though, is writing this iteration of Batman as he existed in the show and not transposing him to any modernity. That’s the impulse, to update and make it easier, but Jeff and I have been consciously careful not to do that. We want to preserve everything that’s great about the show and bring it to life in our series. The same can be said for the Archie side of things.

Dan: Jeff, how are you and Michael splitting the writing duties?

Jeff: It’s not very rigid; we seem to be so thoroughly on the same page that we’re agreeing on the story beats and then divvying up scenes. Michael is so easy to work with and full of great ideas.

Dan: Spill. Are you more an Archie guy or a Batman guy?

Jeff: It depends on the time of day? Like Archie, I also waste a lot of time trying to fix an old car that isn’t worth it, and have deadbeat friends who eat all my food. But I long to be a reclusive millionaire who rocks silk capes. 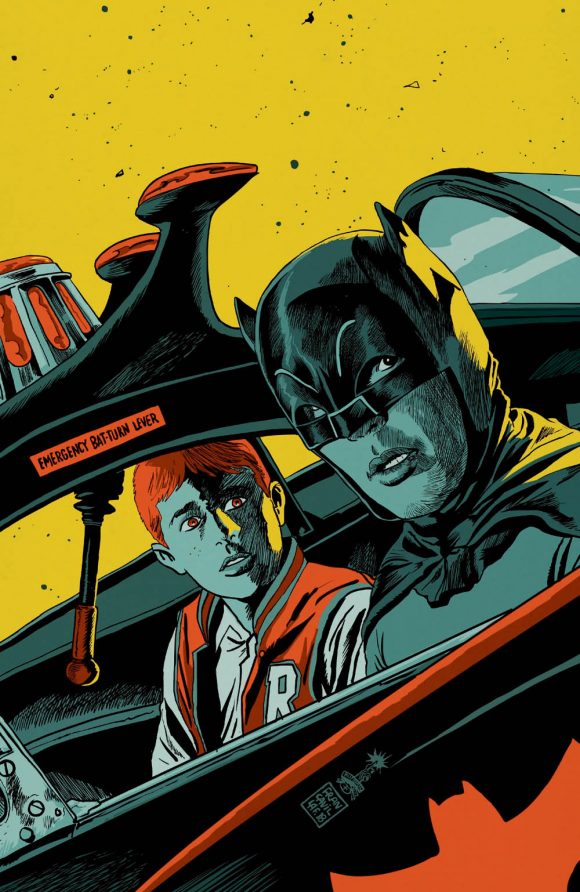 Dan: Give us some teases! Who can we expect to see show up besides Batman and Robin and Archie and his closest pals and gals?

Jeff: The main supporting cast of interest are Dick Grayson and Barbara Gordon, using their youthful looks to pose as new teens in Riverdale, which really throws the classic Betty/Veronica/Archie dynamic out of whack. And Catwoman asserts herself in the new order. Reggie meets the Riddler! But the face-off I’m most looking forward to is Joker vs. Jughead.

Dan: Is Robin a Betty guy or a Veronica guy?

Michael: That’s a tough one, but I’m going to go with Veronica.

Dan: Does the story take place in 1966 or that nebulous timeless world of comicdom? In other words, is the aesthetic Swingin’ Sixties? Because I’d love to see the kids in those groovy fashions. 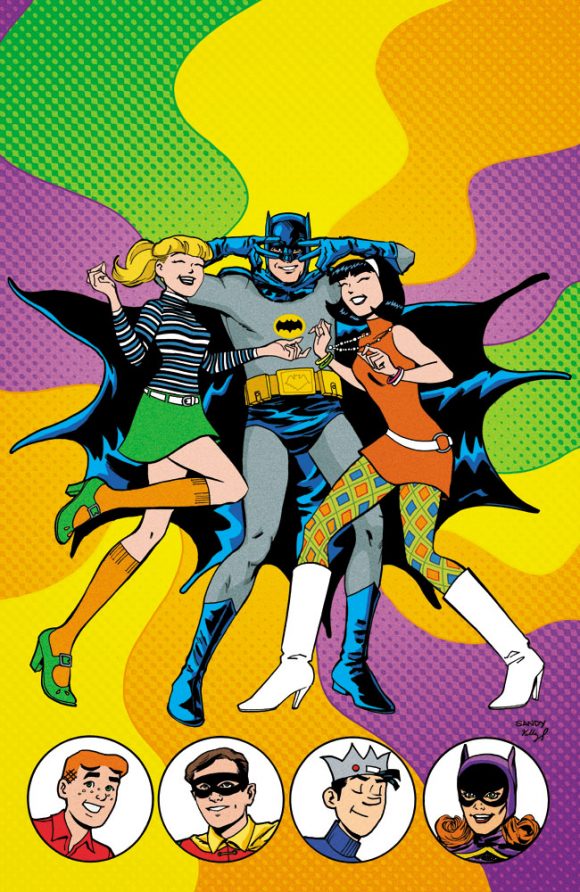