EXCLUSIVE: WARD & NEWMAR Talk About Their Return to BATMAN ’66

The world of Batman ’66 is whipped into a frenzy over the finally-it’s-here announcement of the animated Return of the Caped Crusaders — and I was able to chat with Burt Ward and Julie Newmar about it.

I asked Burt right off what it was like to return to his signature role after 50 years.

“Well, I never really left it,” he said over the phone from California. “Remember, I’m out making appearances every year in front of thousands of people, talking about the subject. So … the only thing different was recording.

“I just saw the new trailer, it looks terrific. Very well done,” he added. “I’m getting thousands of people on Facebook and in groups writing to me, saying they’re all excited about seeing it. So I think it’s gonna be great, but for me I never left it. Or it has never left me, either way.”

But being Burt Ward, the man who runs his own specialized dog-food company — Gentle Giants — and being crime-busting Robin the Boy Wonder are different, aren’t they?

“I just know it intimately,” he emphasized. “It isn’t what you might think it is. It wasn’t so cerebral. It’s simply… the character was me. I wasn’t playing some other character. When they hired me (in 1965), they said, ‘Burt, the reason we hired you was because if there really was a Robin, we would believe you would be it. So we don’t want you to, quote, ‘act,’ we just want you to be yourself and be enthusiastic.

“So, that’s what I did. I don’t ever get away from myself, so to speak. Every day, you get up, you look in the mirror and that’s yourself, y’know?

“All of the emotions, the fists, hitting into that palm, all that stuff, is me. It wasn’t directed to be done. It was me. So there hasn’t been any change. All I did was just read a heckuva lot of dialogue, you know what I mean?”

Newmar said that recording her lines was different from what she’d grown accustomed to as a live-action actress.

“It’s miniaturized movie-making in dark rooms,” she said from her Los Angeles home. “It’s intense, highly concentrated work. And the only thing you’re thinking about is your lips and your lungs, essentially, because that’s the only part of your body you’re working with.”

But she liked the experience.

“Well, they wrote a delightful script,” she said. “It’s funny and they brought in a lot of the villains to spice it up.

For the most part, Adam West, Ward and Newmar were not in the same room while recording — a pretty standard set-up in animation. But Ward was especially pleased by the response he got from Warner Brothers, particularly from one impressed exec:

UPDATED 8/31/16: For an hour-long interview with Burt Ward on The Batcave Podcast, click here. 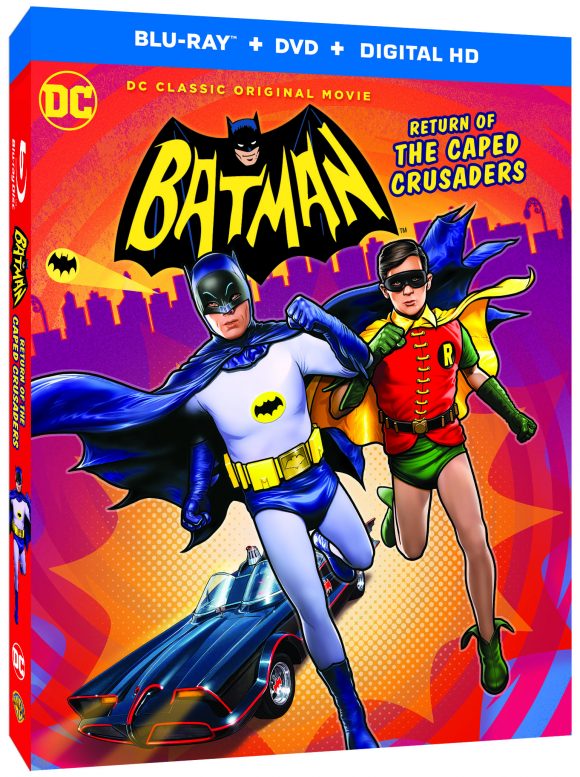 Batman: Return of the Caped Crusaders will be available 11/1 on Blu-ray and DVD. It will also be available for download 10/11.