With 13 NEW PIX of one of the greatest Batman ’66 collectibles ever. 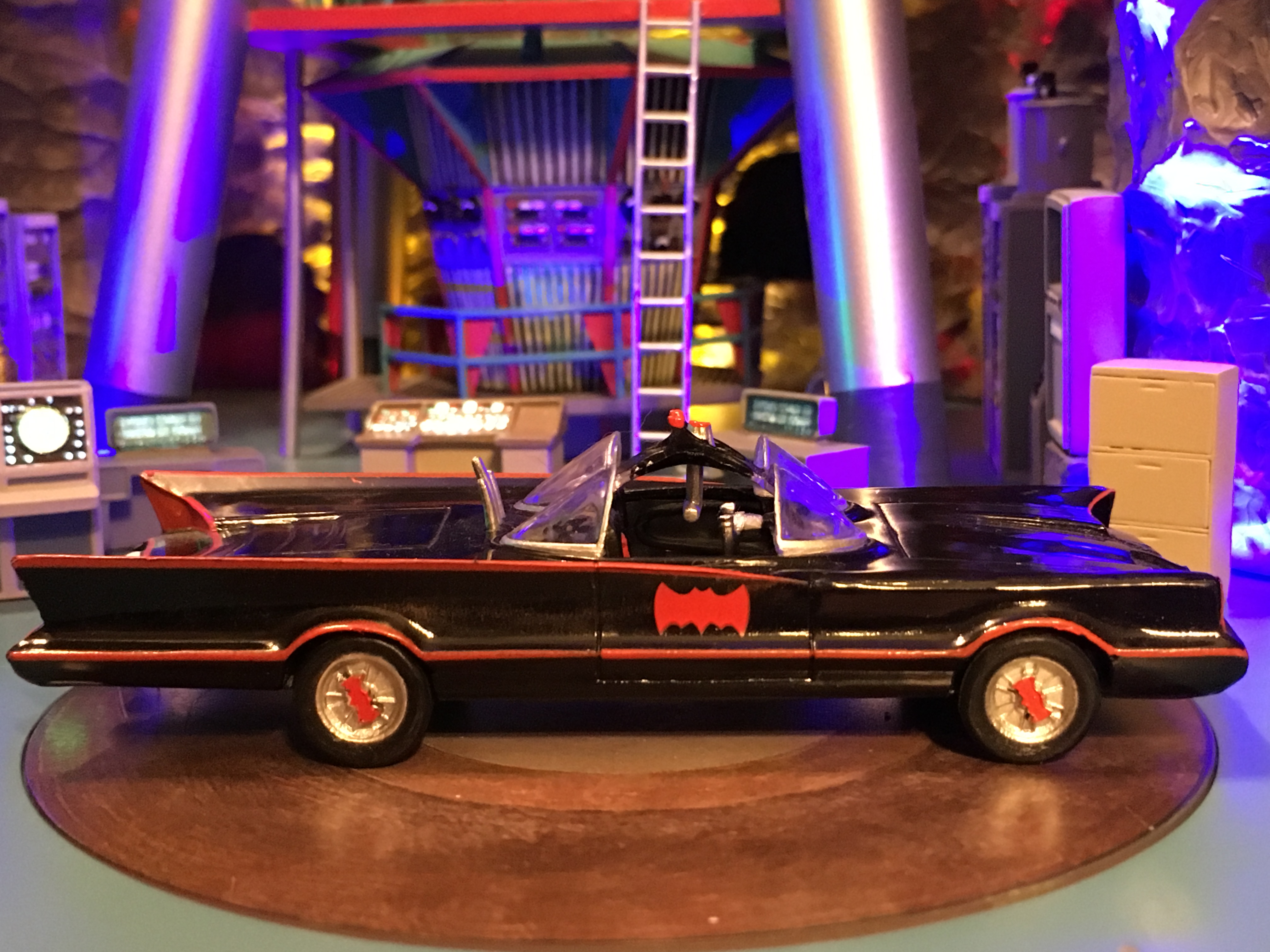 It’s been awhile since we’ve taken you on a tour of Factory Entertainment’s upcoming 1966 Batcave sculpture, but now’s the time to return to this magnificent miniature version of Batman’s headquarters.

Why now? For one thing, Factory has finalized its prototype, with two sets of lighting systems and a variety of stationary and mobile furniture.

For another, Sept. 30 is the deadline to pre-order from Factory itself. And once orders are closed, they’re closed. Given the expense of the item — $799 — the company is determining production size by the number of orders.

Is $799 a lot of money? Yes. However, the company is offering installment plans. (Click here.) Factory has also produced a commemorative metal Gotham City 14 Miles sign that comes with a discount code. There are a limited number of those still available on the company’s website. (Click here.) 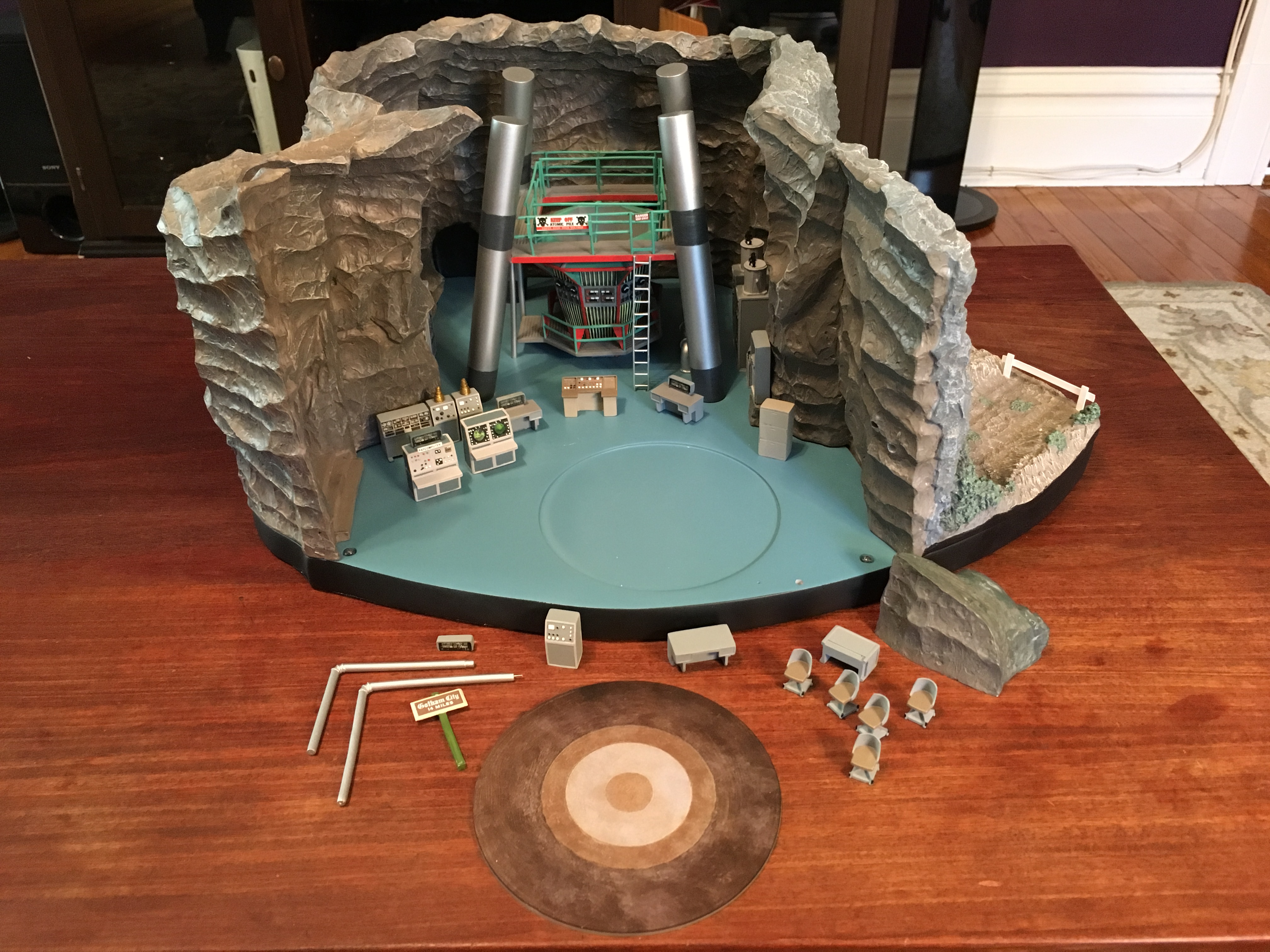 Unlit, in raw form. Note the items that you can move and those you assemble.

Factory listened to the fans who weighed in here at 13th Dimension to make a number of final decisions about the Batcave, including:

— Whether the Batcomputer and other equipment should be stationary or wired for lights;

— Whether the Batmobile’s turntable should be motorized;

— And, whether fans would be willing to buy an accessories pack including miniature figures and other items. 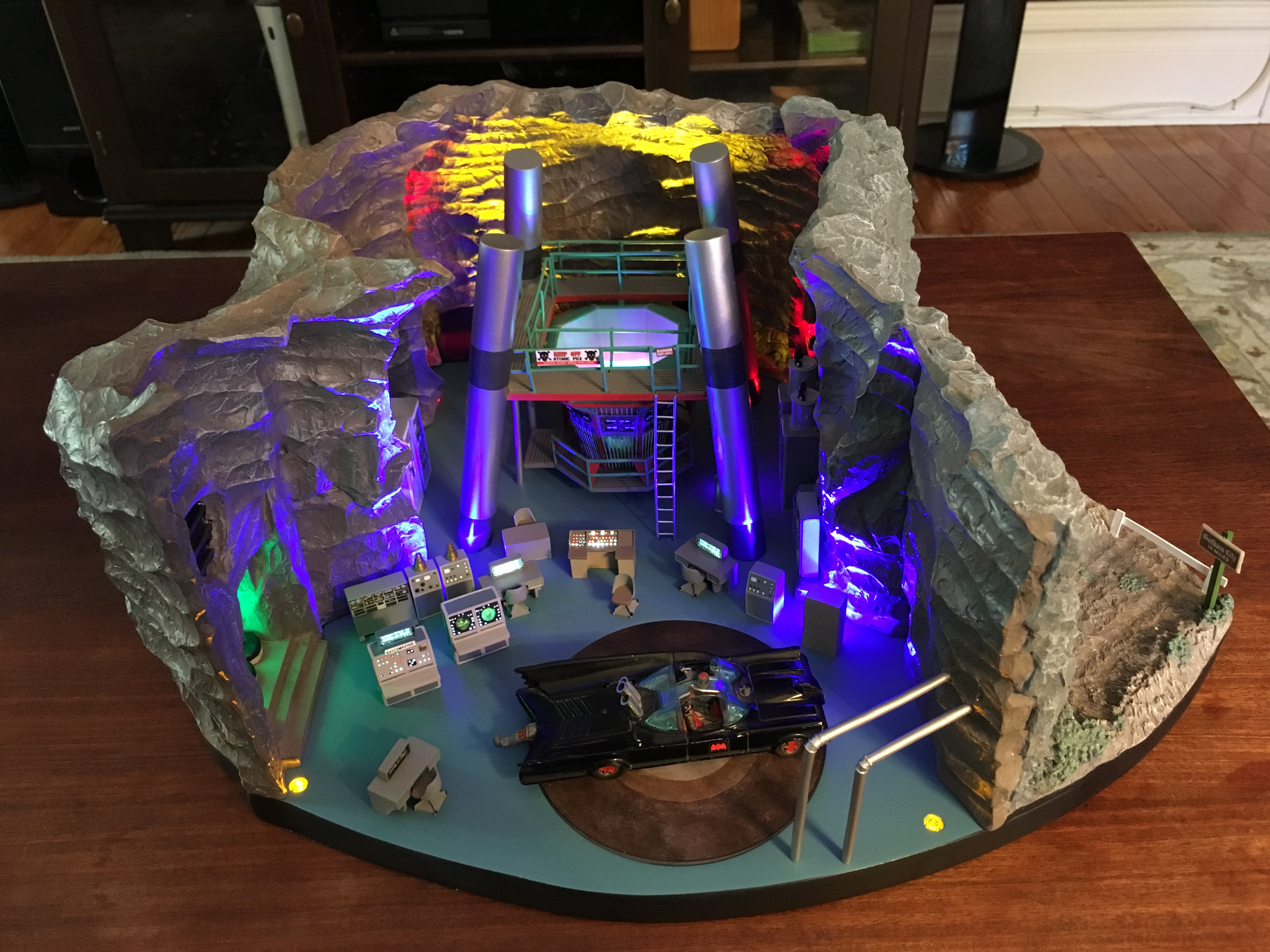 We’ve got your answers below.

Not only that, I had a chance to pore over the prototype and these 13 brand-new photos give you a really strong sense of what’s destined to become one of the greatest of all Batman ’66 collectibles.

This model was shown off at San Diego Comic-Con, where fans were able to get a glimpse. But this is, hands down, the most detailed look at the model you’ll find anywhere. — There are two sets of lighting schemes that can be used alone or together. One circuit handles the atmospheric lighting, including the atomic pile — which features a rotating light pattern — while the other covers the Bat-equipment.

— It’s powered by six AAA batteries but the final version will also include a cord should you prefer to plug it into the wall. 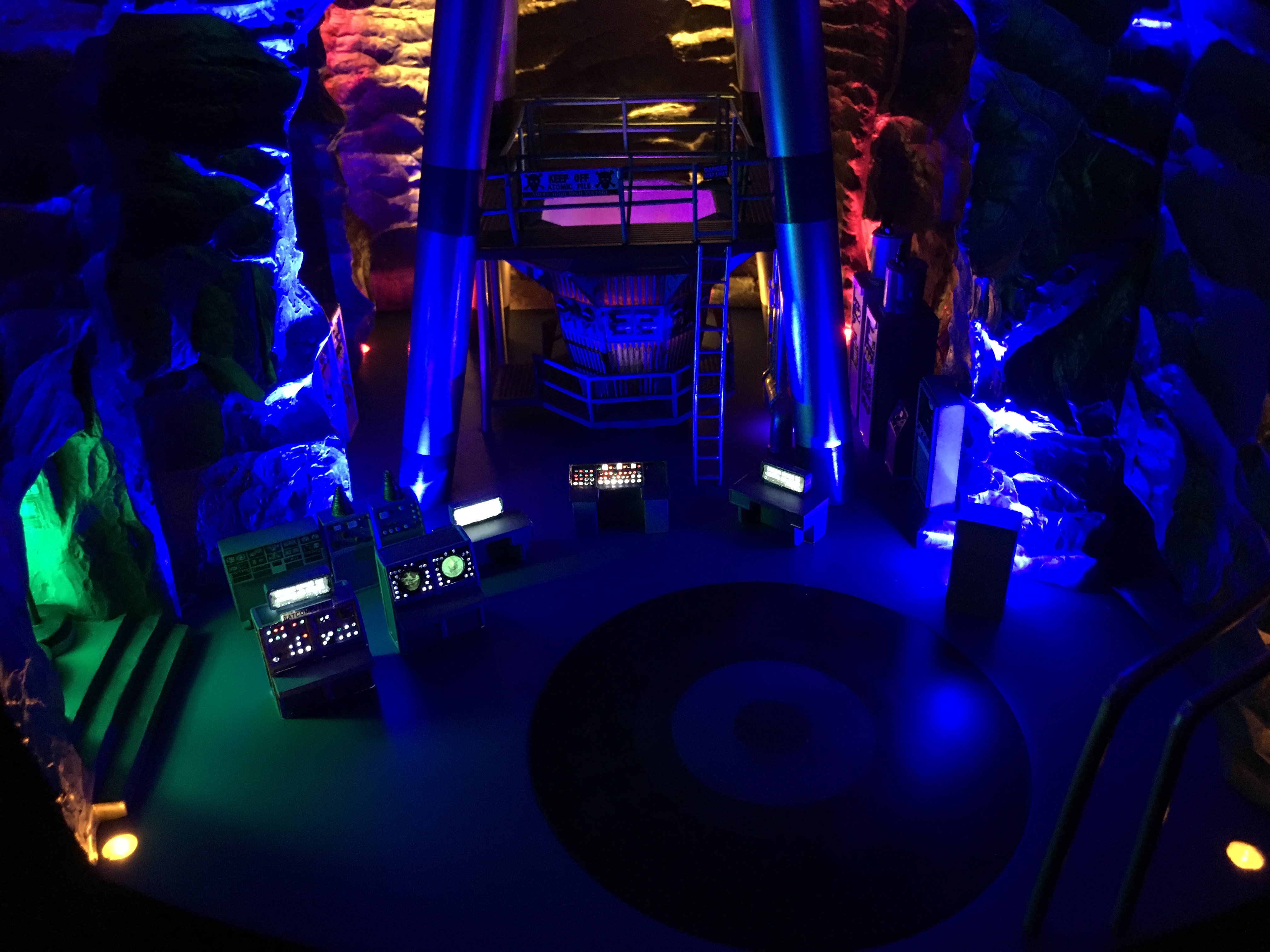 Fully lit, in a darkened room. 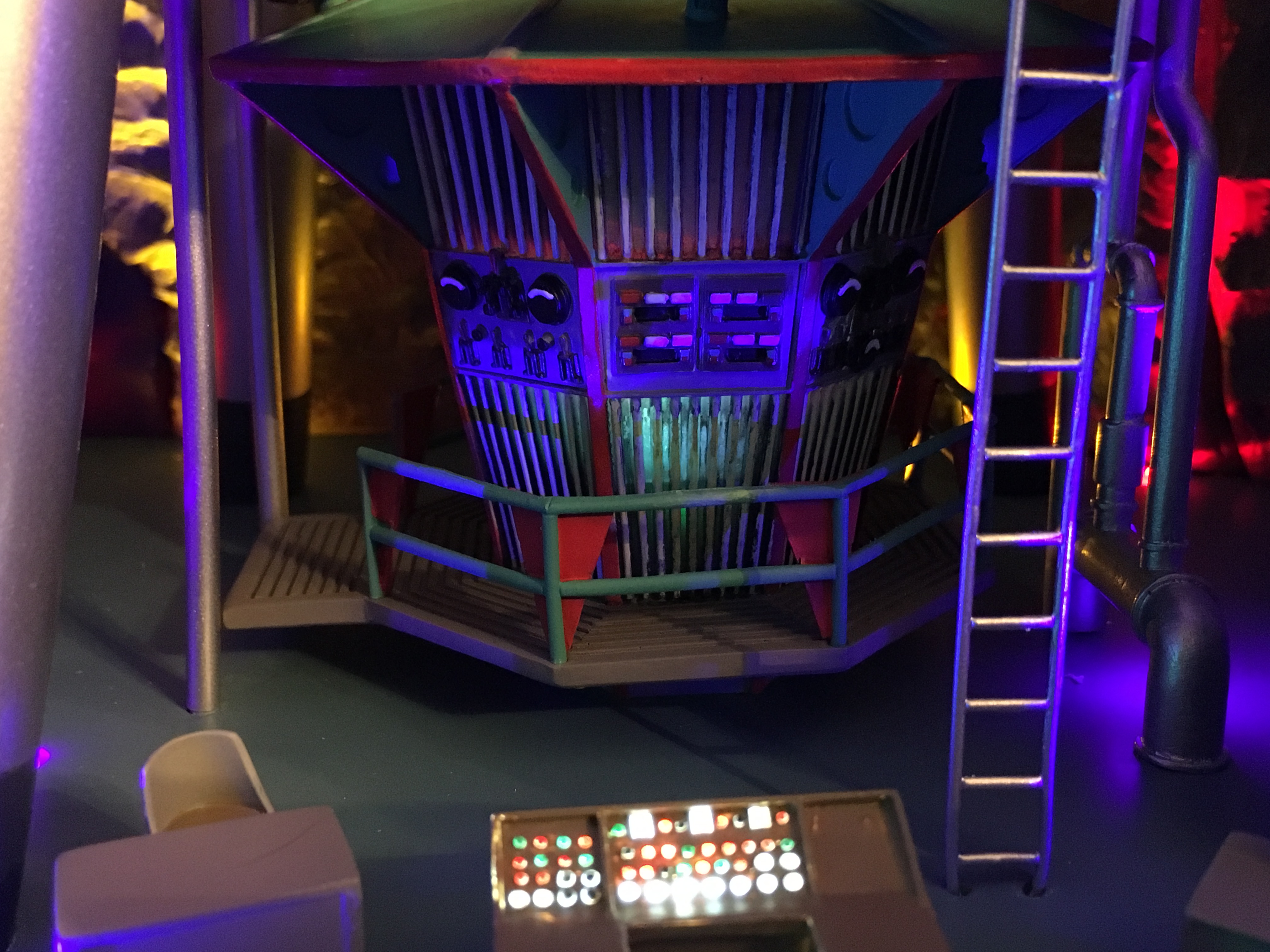 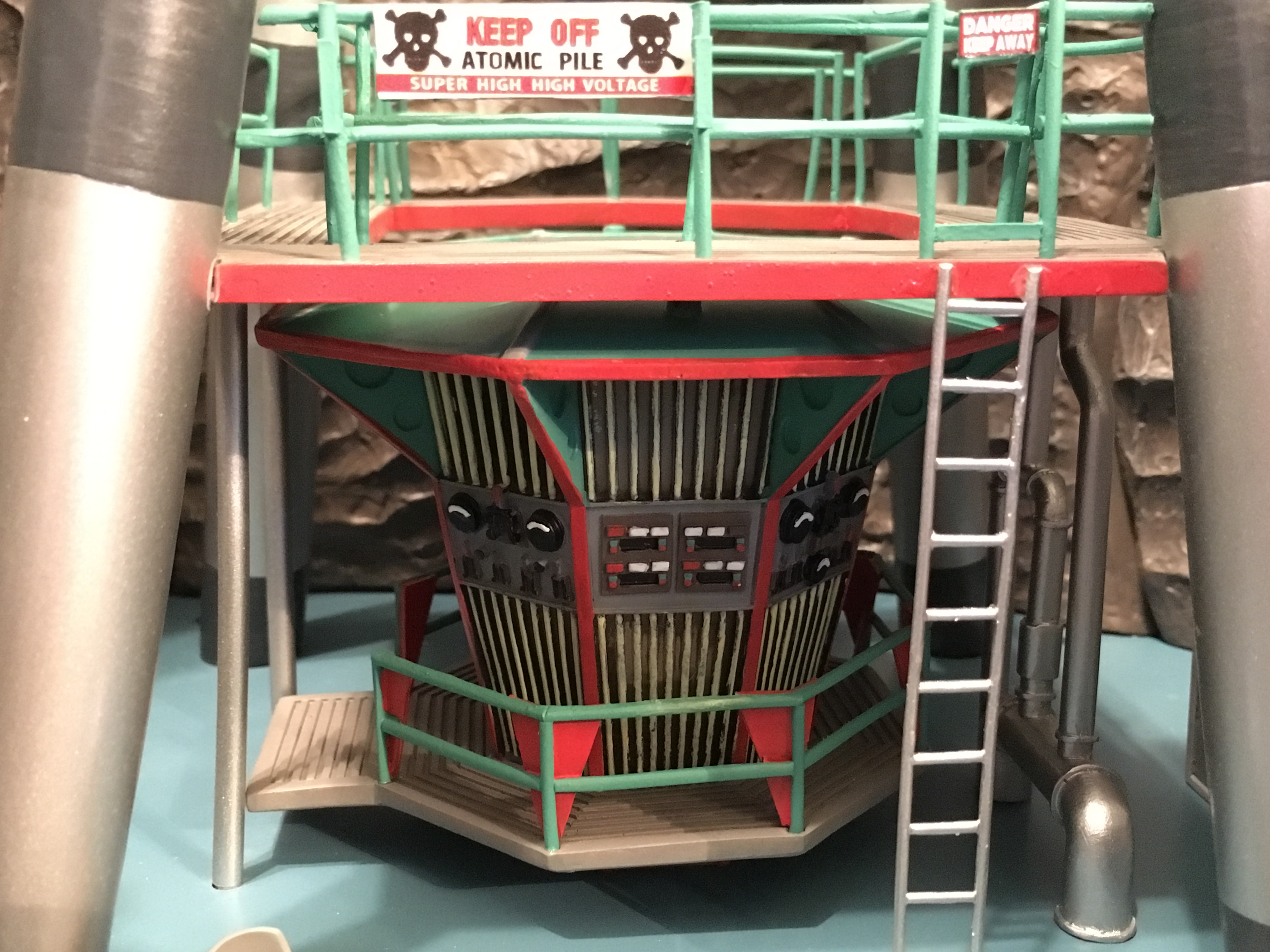 Unlit, in a lighted room.

— Some of the furniture, like the Batcomputer itself, is stationary and wired for light. Other items can be moved around at will. The lights blink on and off — but they’re not in sync, giving the illusion that each piece of machinery is independent of the other. 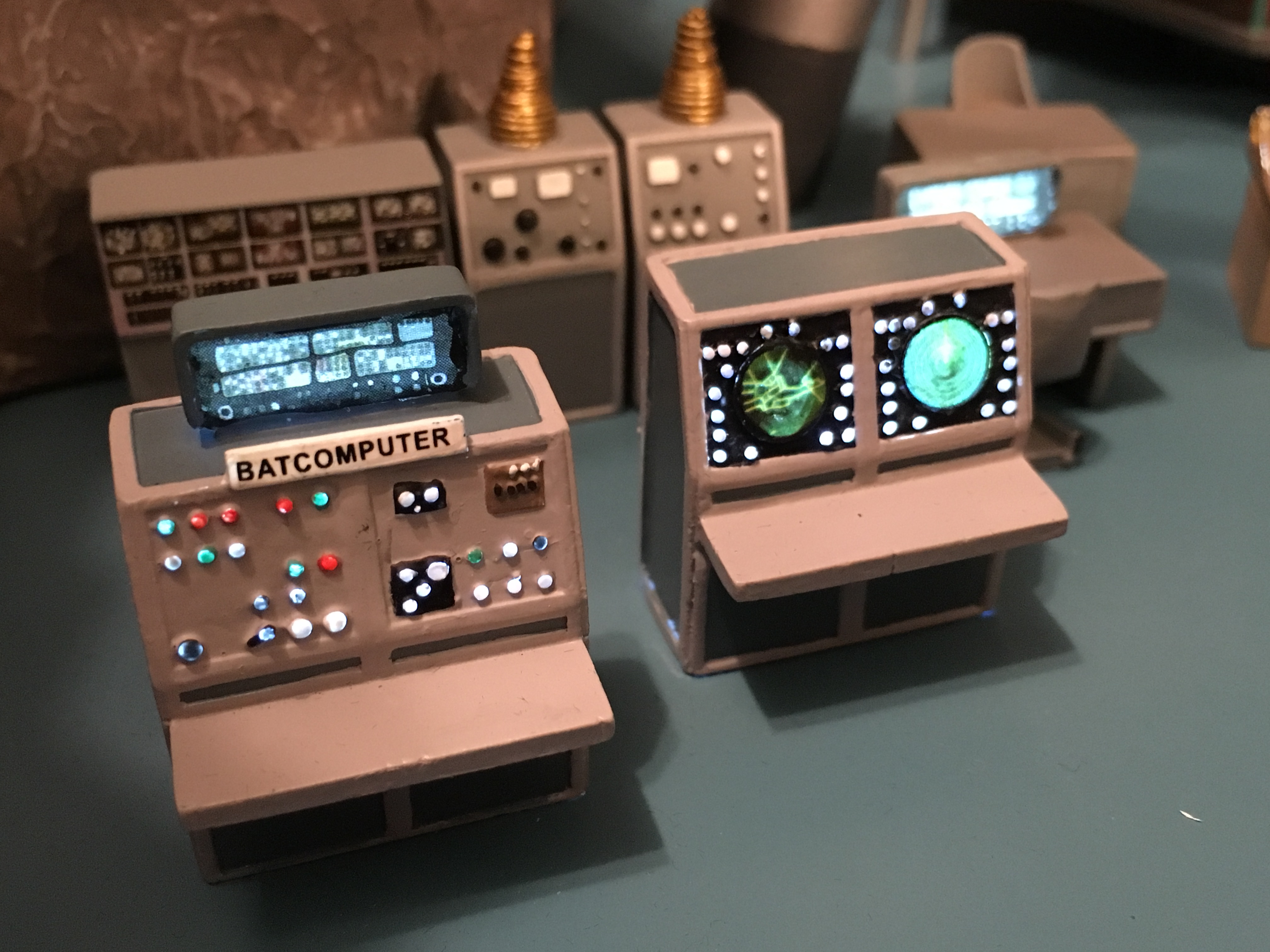 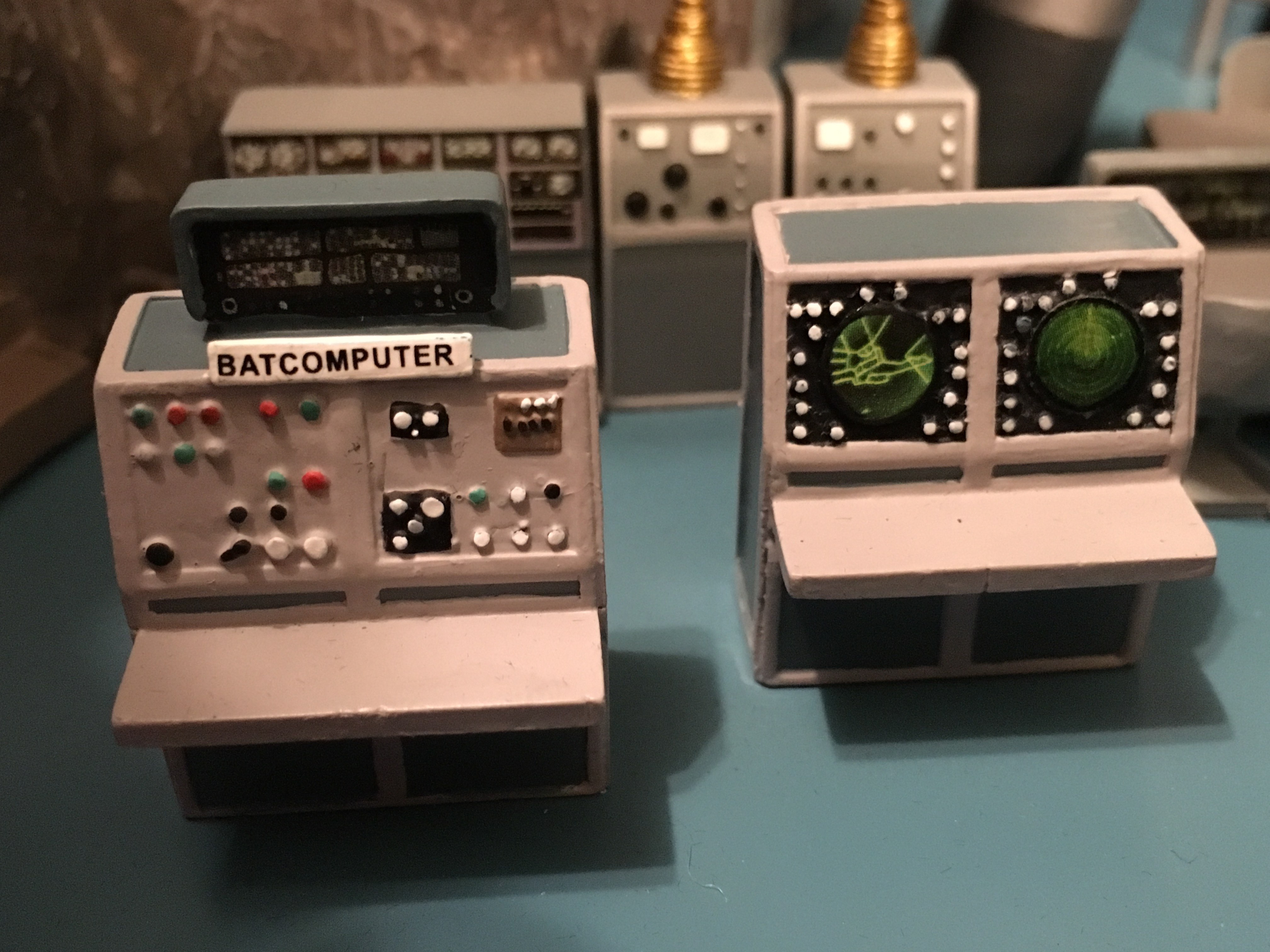 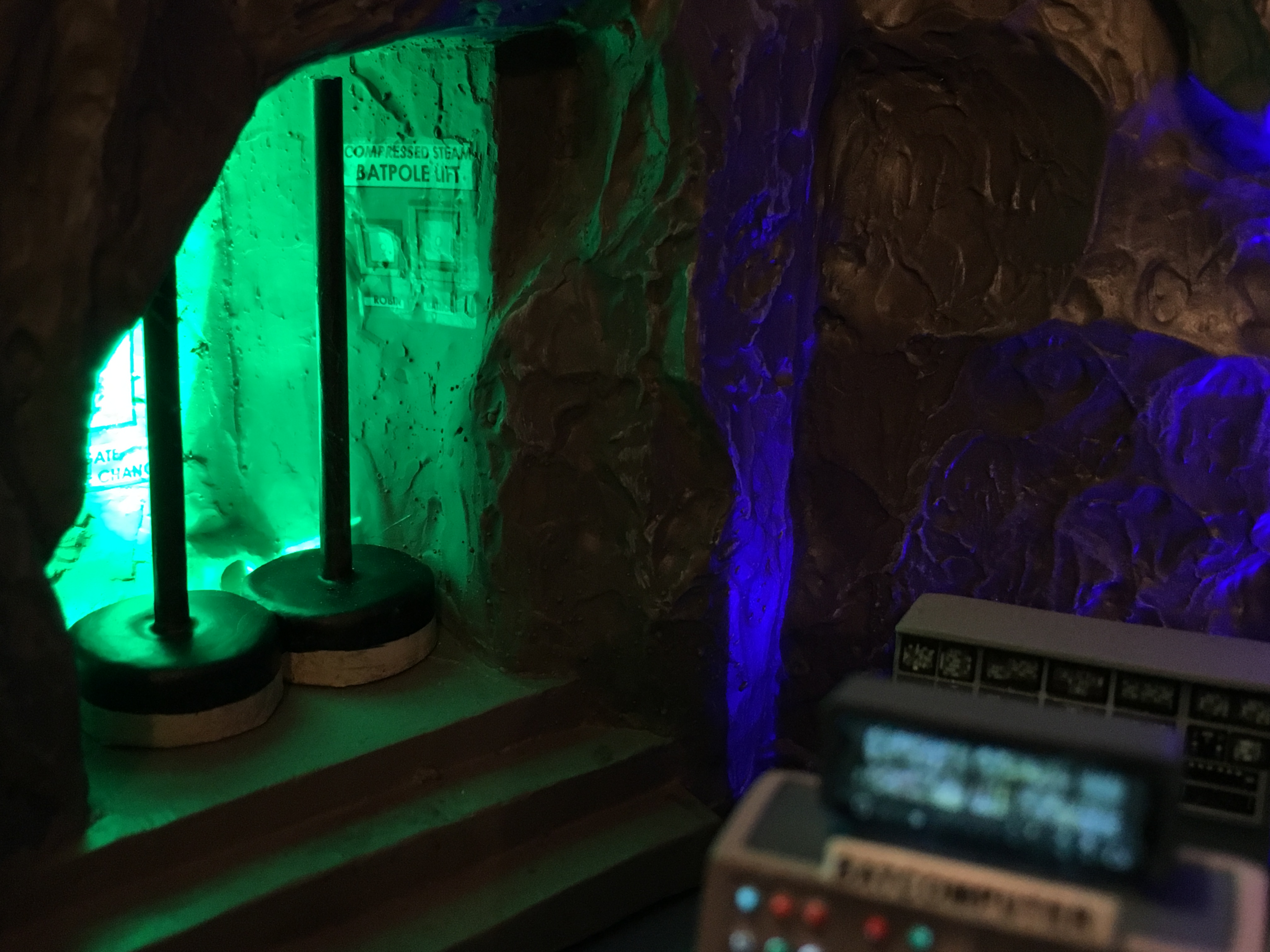 — The Batmobile’s turntable is operated manually. Factory Entertainment creative director Barry Eldridge said they tested a mechanized one but the laws of physics kept pushing a 1:50-scale Batmobile (not included) off the platform.

— Speaking of the Batmobile, Factory has no plans to include one if it decides to do an accessory pack at some point. (I used a Corgi Batmobile and a Hot Wheels for these pix.)

— But minifigures? Time will tell. In the meantime, I tested out the Batcave with some Funko figures and HeroClix, just for fun. The latter two are much closer to the Batcave’s scale, obviously. 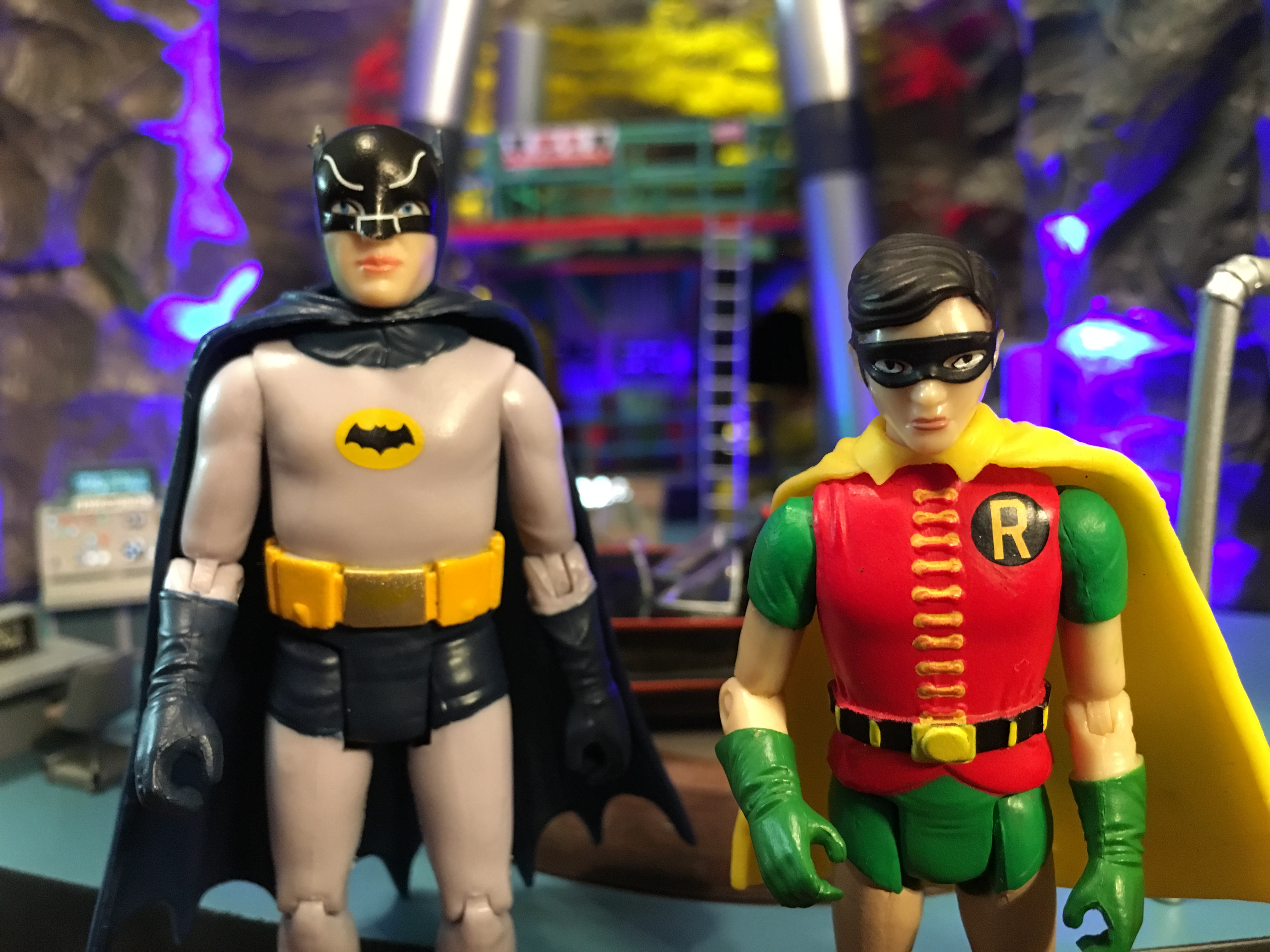 — Oh, and check out the removable Batcave entrance: Now, we’ve got much more to come on the Batcave in the coming weeks, including EXCLUSIVE videos, a special episode of The Batcave Podcast and more. You can find all our coverage in the link below.