A REVIEW of the forthcoming Clown Princess of Crime — plus her puddin’, the Joker, and Batman, Superman and Wonder Woman.

As I noted the other day, Eaglemoss is back with a fresh spin on some old favorites — a new series of miniatures based on DC’s best heroes and favorite villains.

These mini-statues, which are in 1:21 scale, are a welcome addition to the collectibles market. This line’s predecessor was cast in lead, which was a turn-off to a lot of collectors — myself included. 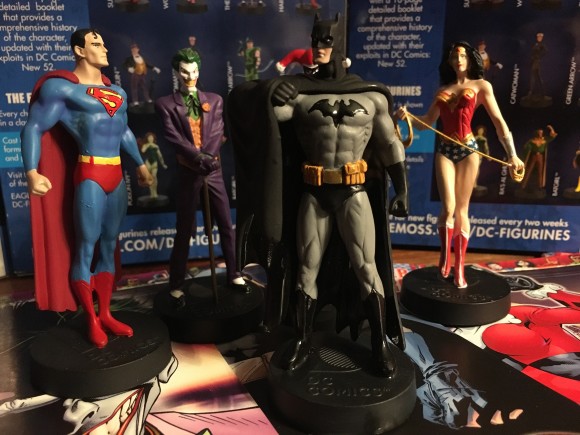 Finally, I can set these figures out without worrying if the cats rub their faces on them, know what I mean?

Last week, the company released the first four figures in the new line — the DC Comics Superhero Collection — which is a Best-of series: Batman, Superman, Wonder Woman and the Joker. Next up? Outlandishly popular Harley Quinn, which should be hitting shops within a couple of weeks. 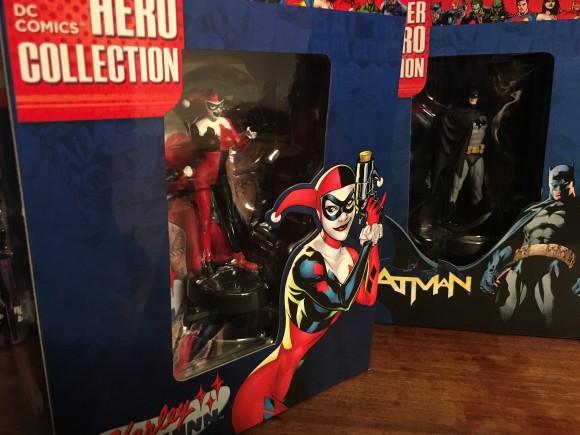 The figures run about $18-20 each in stores or from online retailers, and come with a 16-page informative magazine that’s updated and scaled down from the originals that came with the lead versions. (Much more convenient since they can fit in the boxes now.) The mags give you an illustrated history of the character, from the beginning up to the modern day. 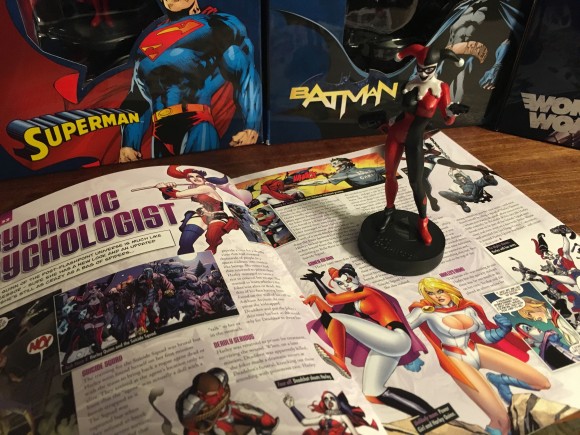 How to get? Hit up Eaglemoss’ site because it’s expected there’ll be subscriptions like the ones available for their other lines. And if you’re subscription-averse, just ask at your store.

Now, to the figures: 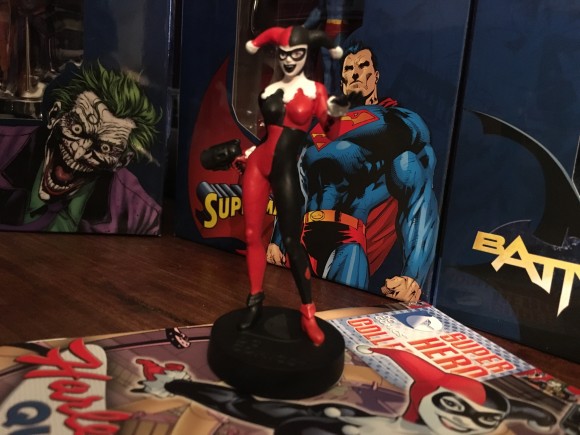 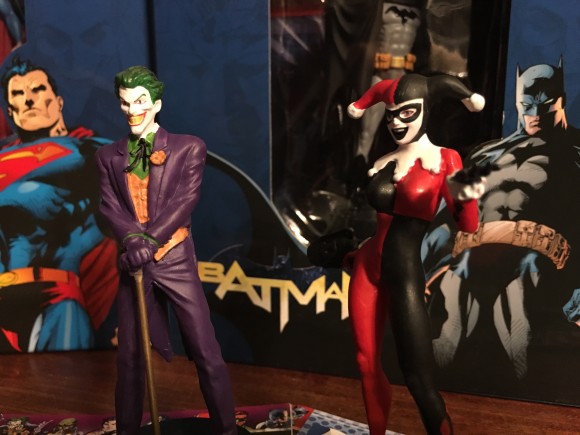 Harl comes in her classic red-and-black harlequin ensemble — most of these figures are based on original or definitive designs — with molded pop gun and playful pose. The figures all stand securely on solid, black bases. 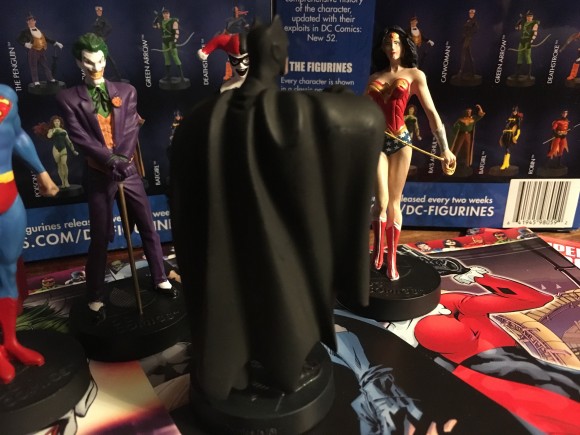 I like this Batman a lot. For one thing, he’s not just standing there. I mean, he’s standing there, but he’s doing that hide-behind-the-cape thing, which is always cool. His outfit is the standard pre-New 52 black and gray — with black shorts! Bat-yay! 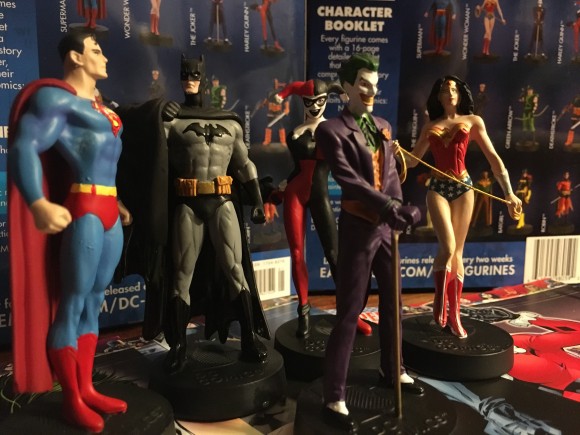 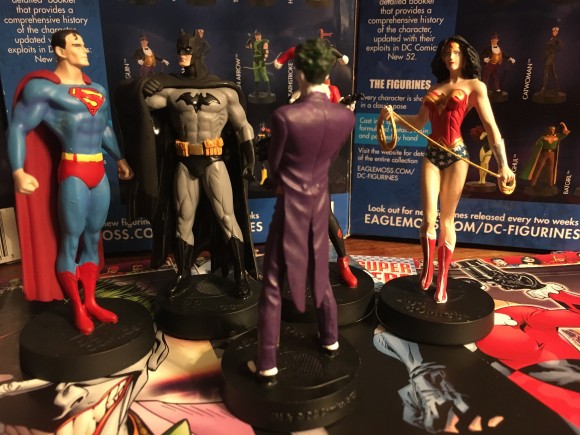 This is the Joker through and through. Purple suit and tails? Check. Cane? Check. Malevolent grin? Check. Pair him with Harley and you’ve got Crime’s First Couple, which sounds like a mid-’50s Batman story doesn’t it? 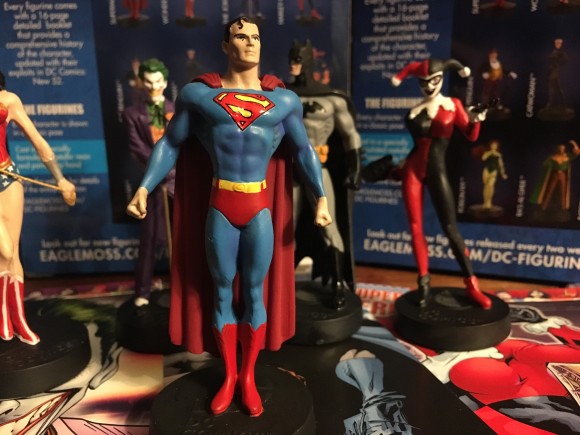 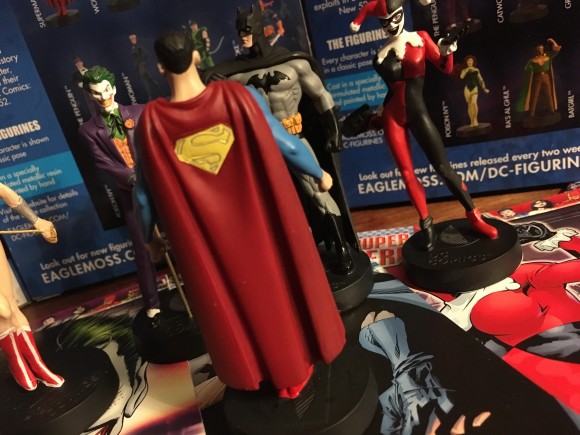 This is great. So refreshing to see the classic Superman outfit. I mean this is right out of the Alex Ross playbook, y’know? Big, red S. Chest thrust outward. Chin held high and proud. Plus, Eaglemoss gets the details right by not skimping on the yellow emblem on the cape. 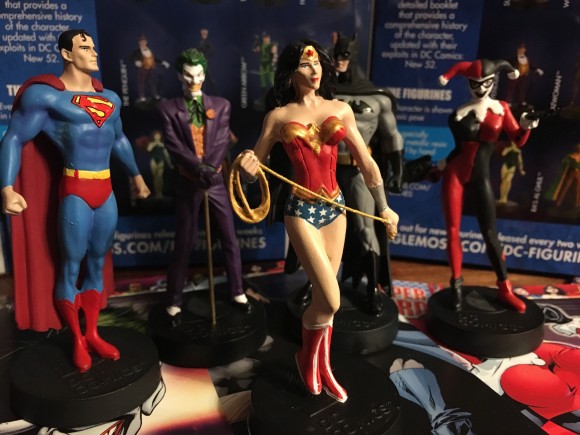 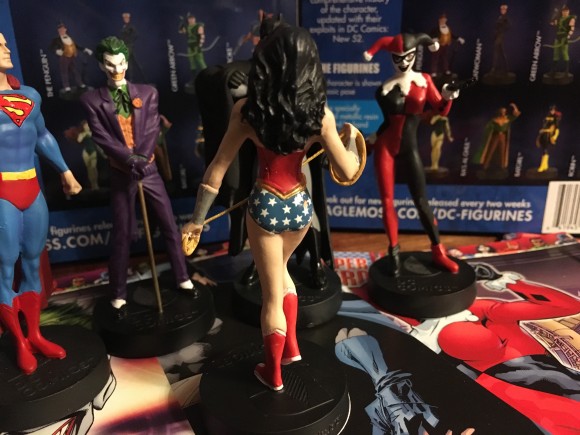 Again, it’s the little things, no pun intended.. It’s not easy to cast a golden lasso like that, but it’s in her hands securely. All of these figures are light but sturdy. Wonder Woman looks great in her old-school outfit and I guess if I have a quibble it’s that the women are the same height as the men. But it’s not like figures like this have to be exactly in scale with one another. (And WW is tall, besides.)

The boxes themselves are pretty straightforward but I am an absolute sucker for packaging that highlights upcoming items in the line — and these look pretty cool. 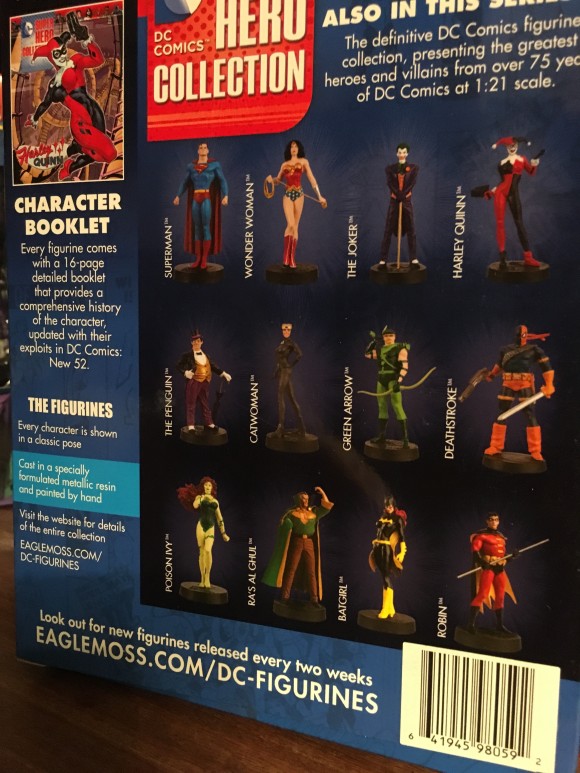